This sedge project didn't start out as a collection.  I simply wanted to line the stone walkway in my side yard with gentle terraces of graceful green sedge.  The story of my foray into the world of sedge collecting makes a good post for Foliage Follow-up at Digging. 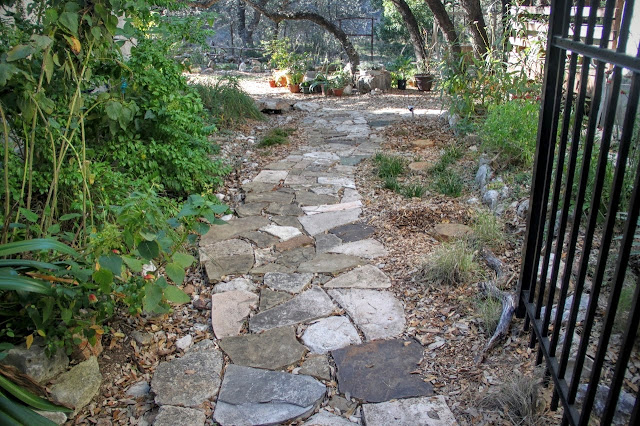 Because the growing conditions in our climate can be tough, I often purchase just a few of a new plant to trial for a season or two before committing to more.  This habit sometimes leads to continuous plant experiments.  After successfully trialing Texas Sedge (Carex texensis)purchased from Hill Country Gardens in New Braunfels, I inadvertently purchased a different texture of the same botanically named plant from another nursery. Carex texensis from Hill Country Gardens remains bright green all winter with tall, upright seedheads in fall. Just what I want to see here. 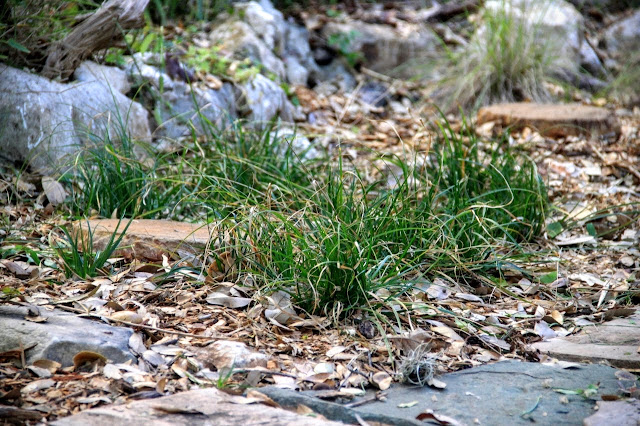 The second Carex texensis is more finely textured, turns mostly dormant brown in winter, and has not produced seedheads since I planted it two years ago.  To say it has not performed well would be an understatement.  Still struggling after nearly two years.  Not the right plant for a path I traverse several times daily. 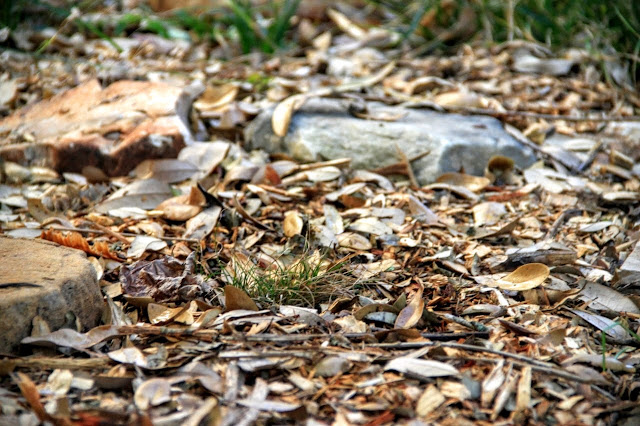 Both versions were planted along the walk at the same time in the same soil and light conditions Carex texensis 1 in the center, Carex texensis 2 is practically invisible lower left. 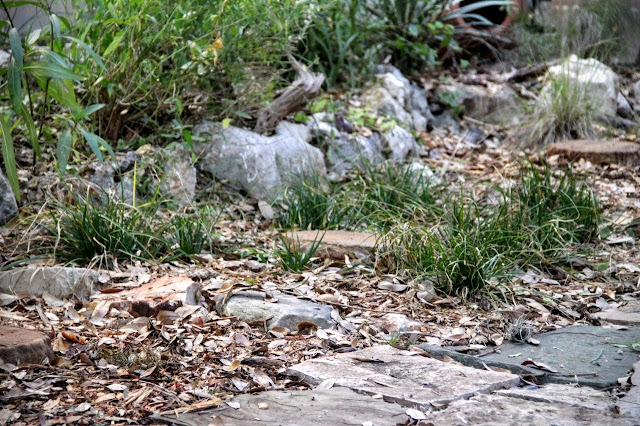 Lesson learned.  Purchase native plants from the same source if you want them to match.  The underperforming Carex texensis 2 will be moved to another location and I'll divide the others so they will match.

Since I seem to be amassing a collection of native sedge grasses I decided to try Texas native Webberville Sedge (Carex perdentata) while I was at it. Across the walk are three Webberville sedge and one of the underwhelming Carex texensis 2.  A second Carex texensis 2 died out at the end of last summer.  Webberville Sedge has been an impressive performer just one year so I'd definitely add more.  Now this project is more experiment than collection! 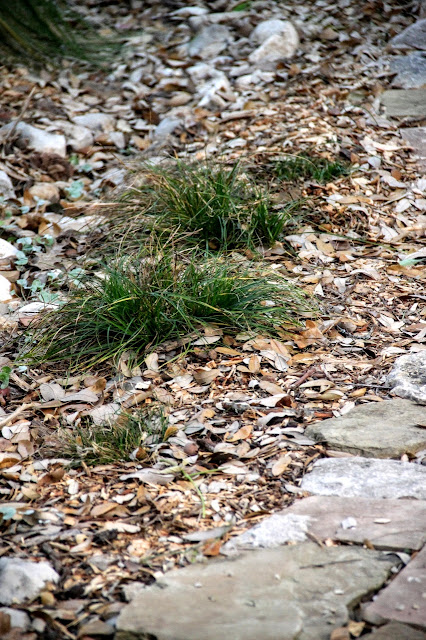 It's not all "sedge and games" since the top of the hill is way too hot and sunny for sedge.  Ruby Crystals (Melinus nerviglumis) grass is drought tolerant and isn't a bit bothered when the the gate opens over it. 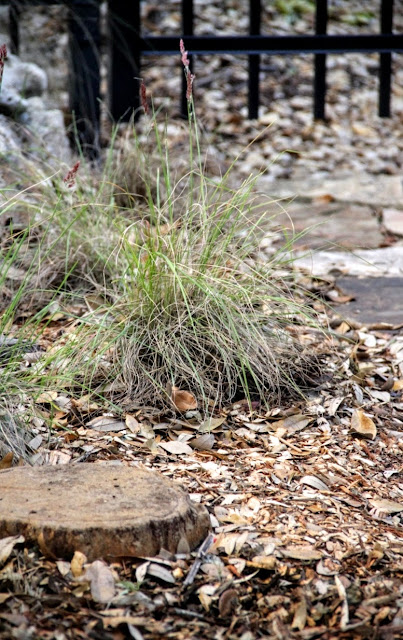 Then there's my first sedge purchase of non-native Berkeley Sedge (Carex divulsa) nearly four years ago from Hill Country Gardens in New Braunfels.  I planted it first in the front agave bed, shown here in an old photo before the bed was entirely reworked.  Not too impressed with those little green dots after about six months. 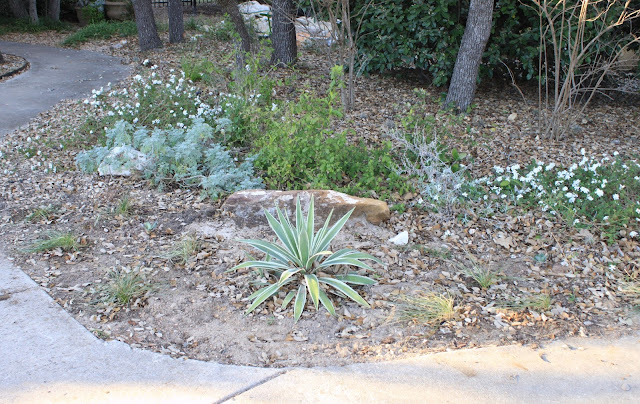 Very, very slow to fill in so after a summer of disappointment I transplanted it to a less visible and very shady area and reworked the front garden.  I wrote about the process in my post here.

Two years later that same transplanted Berkeley Sedge is looks great just inside the side gate.  I'll probably move these to a more prominent location this spring and plant the disappointing Carex texensis here where they will most likely do better. 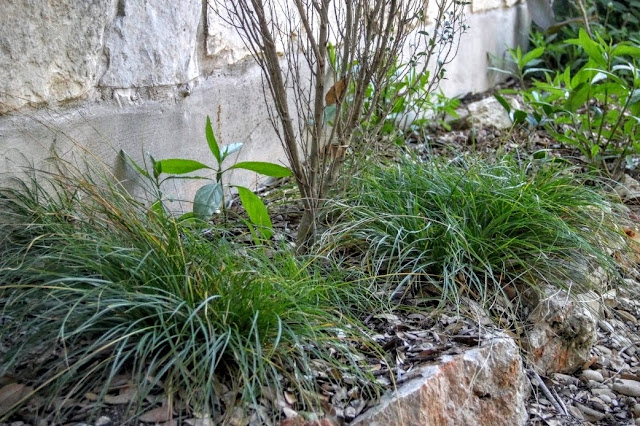 Joining the sedge party is Cedar Sedge (Carex planostachys) which I discovered grows naturally in my yard soon after purchasing this one at a native plant sale.  Now I'll add any I find to the shady slope below the deck where it will fill in with existing native horseherb groundcover. 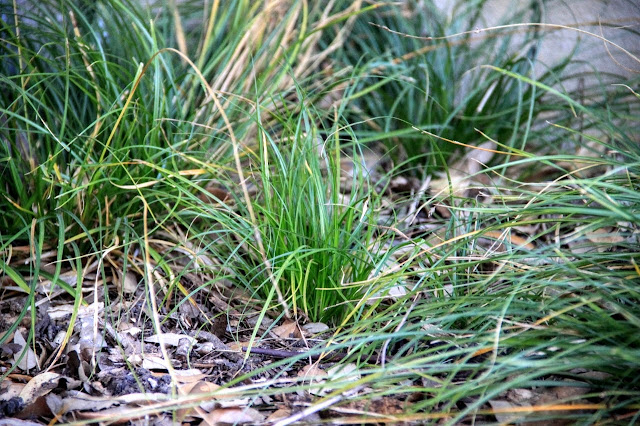 I was happy to find silvery Gray Sedge at Barton Springs Nursery in Austin last spring.  BSN doesn't label 4" pots individually and I remembered it as "Gray Sedge" but can't find anything similar in my online research. I'll be heading back up there this spring and hope to find a few more.  I'll take a photo along to help solve the naming mystery. 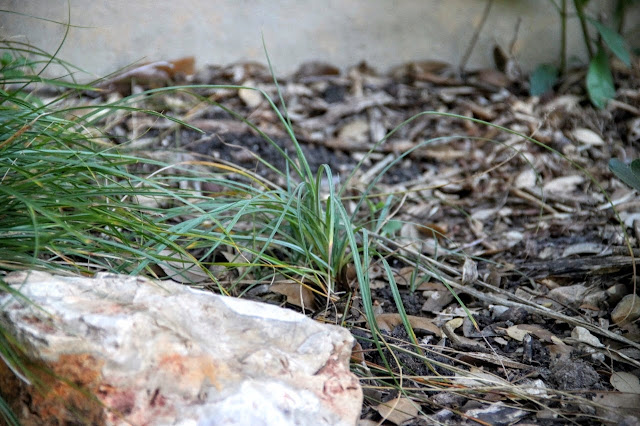 It's quite a collection or experiment and they'll all find a home in the garden somewhere. I already have a list going for spring transplants because moving things around gets the best out of each plant.

Thanks to Pam for hosting Foliage Foliage Follow up at Digging so I have a reason to put my sedgey thoughts together this month!
Posted by Shirley Fox at 9:59 AM