Our especially mild winter weather this year means an even earlier spring.  By the time April showers roll in our spring flowers will be finished and by the end of May we'll see only the toughest of summer flowers.  It's been nearly a month since we had measurable rain and yesterday morning brought light showers of just .01 inch.  Sometimes we celebrate what's known as a "trace" of rain most places and it was just enough to freshen the garden for sharing a few early spring photos.

Tazetta Narcissus 'Golden Dawn' are naturalizing up to Zone 9.  This is their first year in the garden so next year will tell if they make it through our hot summers. 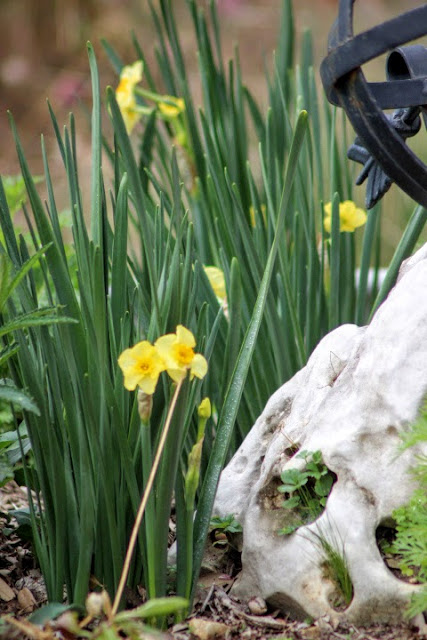 One hundred of the same bulb scattered throughout the garden.  Spring bulbs are one of the few things I miss from living in colder climates so having these naturalize will be nice.  And I won't have to shovel heavy spring snow to see them! 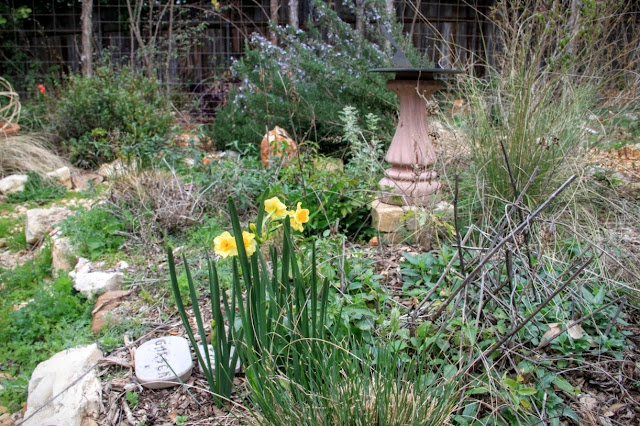 Red Shrimp Plant with a bit of chartreuse at the tips will redden up as the bloom ages. 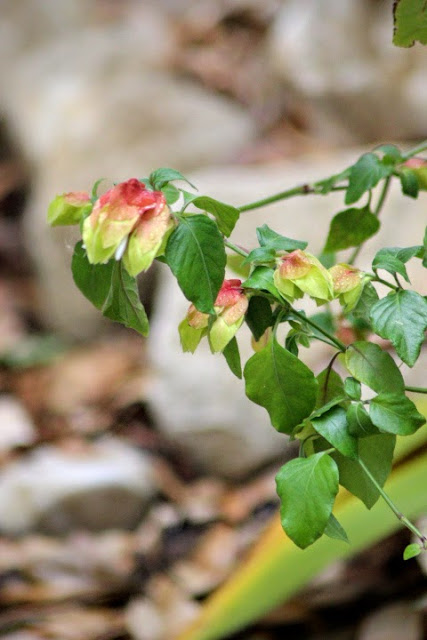 Yellow Butterfly Vine (Mascagnia macroptera) seeds look like flowers and the real flowers are much smaller and quite prolific.  Planted on a fence in full sun, it never seems to need anything and blooms year round most years. 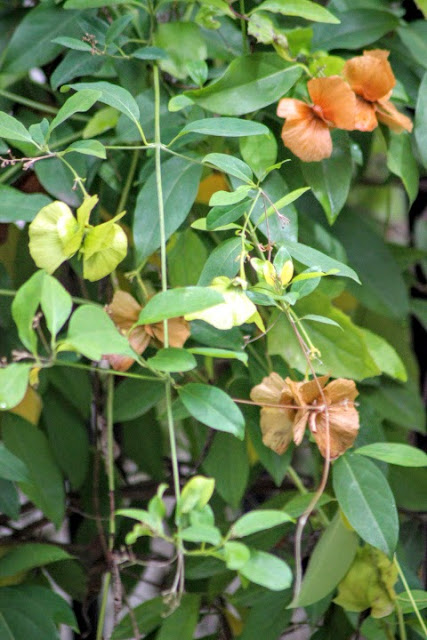 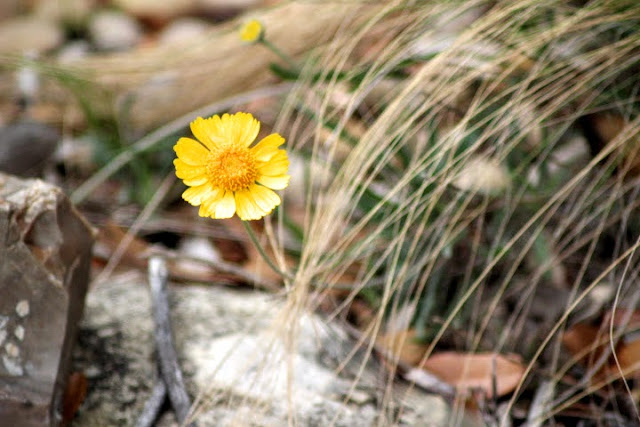 Mexican Yellow Cosmos or Mexican Aster, typically a reseeding annual, these have bloomed all winter.  I've found they need some afternoon shade in August so I'll try to get the seeds moved for fall blooms. 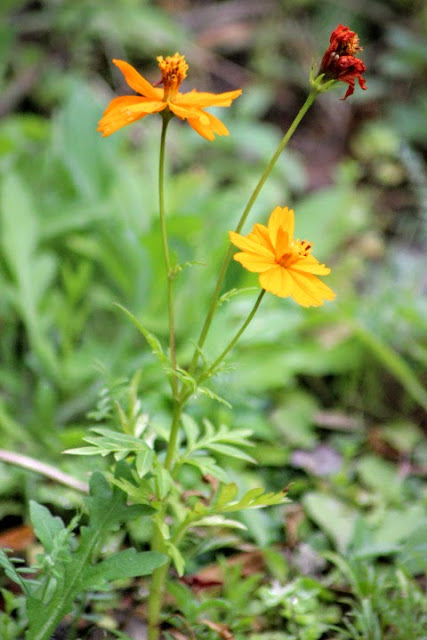 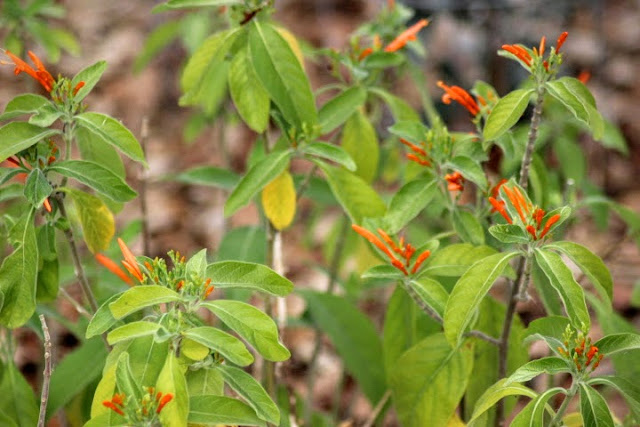 Jerusalem Sage (Phlomis fruticosa) took a while to get established but now it seems to be taking off.  I use mostly yellow blooms in the sunnier part of my garden so this is a welcome sight. 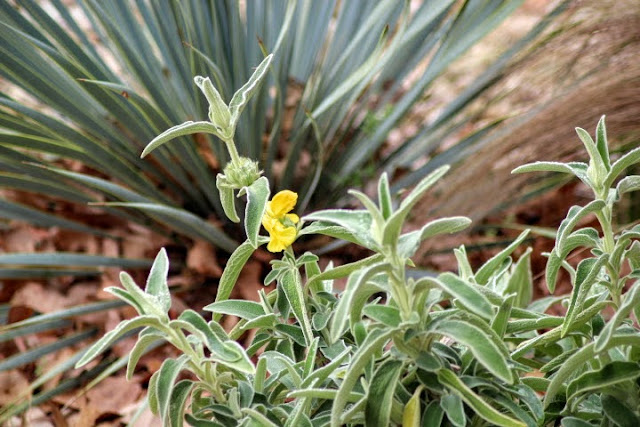 Bilbergia gets stashed in the garage on very cold nights and rewards with this pretty, exotic flower.  Worth the effort. 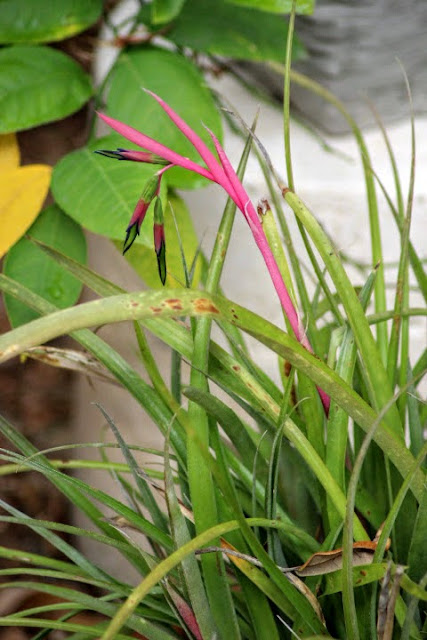 Kalanchoe Diagremontiana, mother of thousands or sometimes millions is a vigorous spreader that needs to be contained but when it blooms all is good. 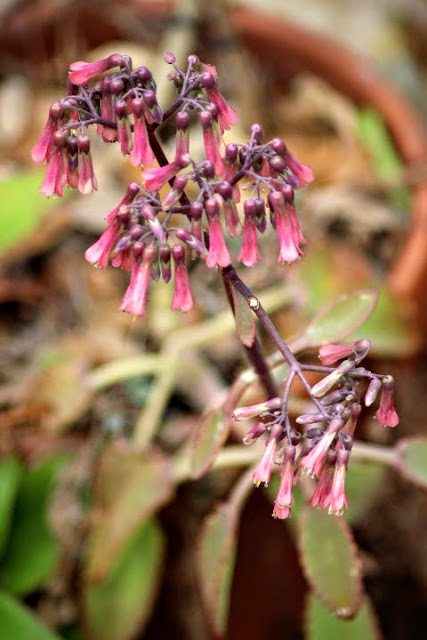 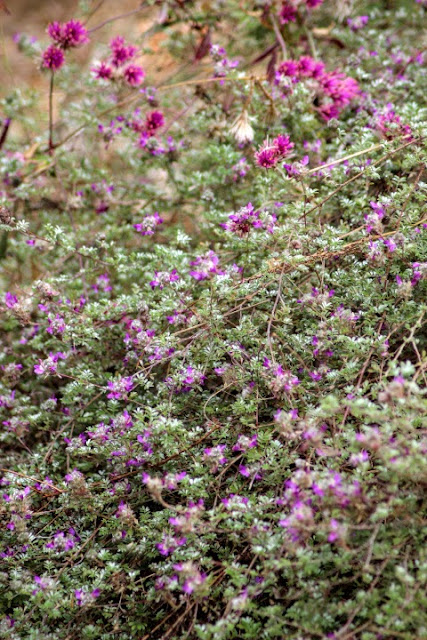 Rusellia 'Red Rocket' (Russelia sarmentosa) lives up to its name. 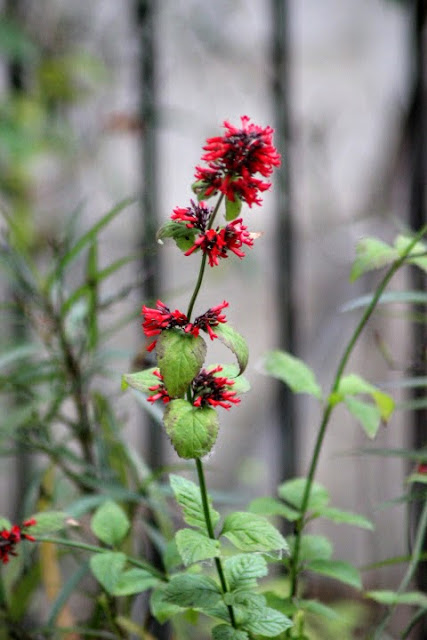 Esperanza 'Bells of Fire' planted last fall didn't even die back.  We planted two of these on either side of an existing yellow Esperanza for more color along the back fence. 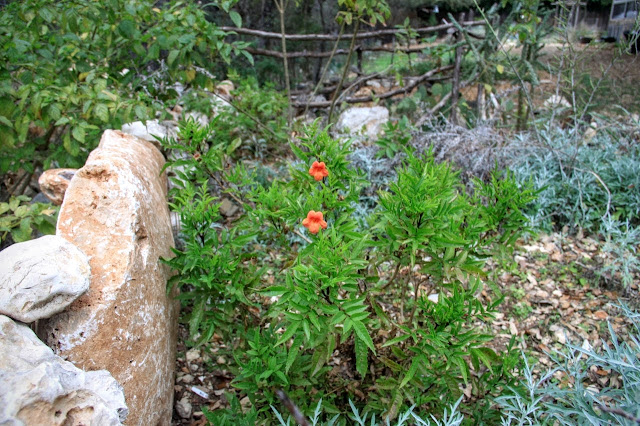 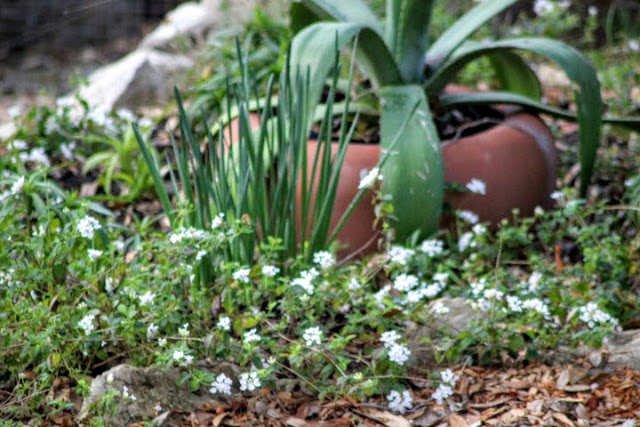 Welcome back to the Blue Potato Bush (Lycianthes rantonnetii) that stubbornly refused to bloom last year after a late freeze followed quickly by an early heat wave set it back a whole season. 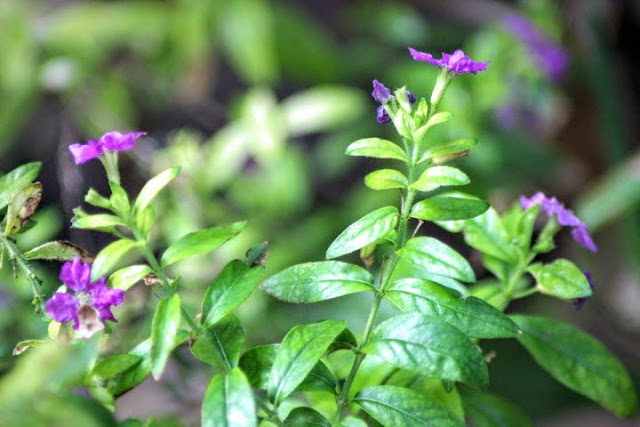 Salvia Amistad, another plant that usually dies back to the ground.  I heard a hummingbird buzz by a few days ago, so we're ready for the big migration with one of their favorites. 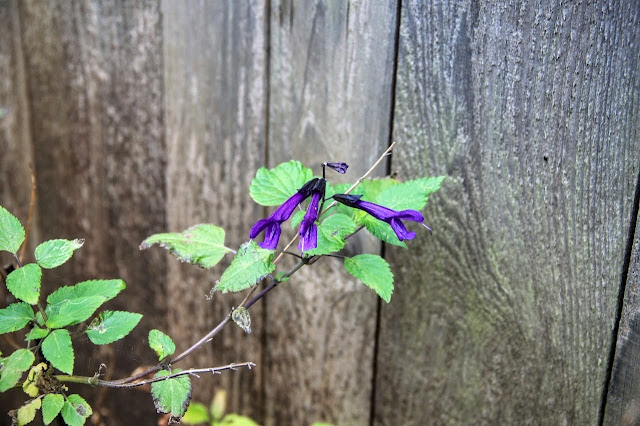 Annual Fernleaf Lavender is a perennial this year. 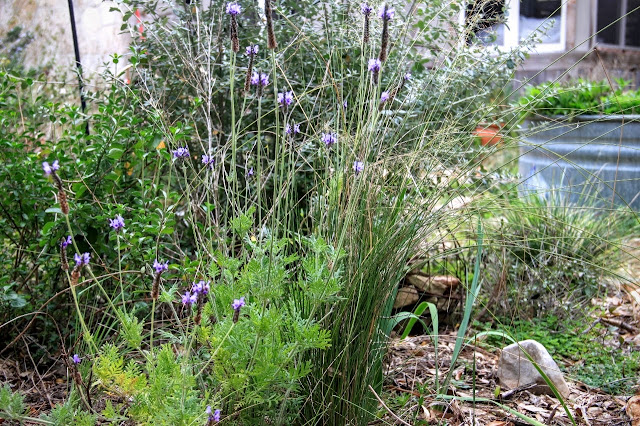 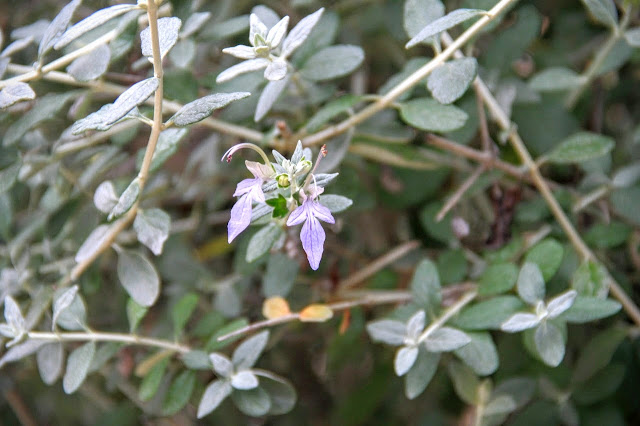 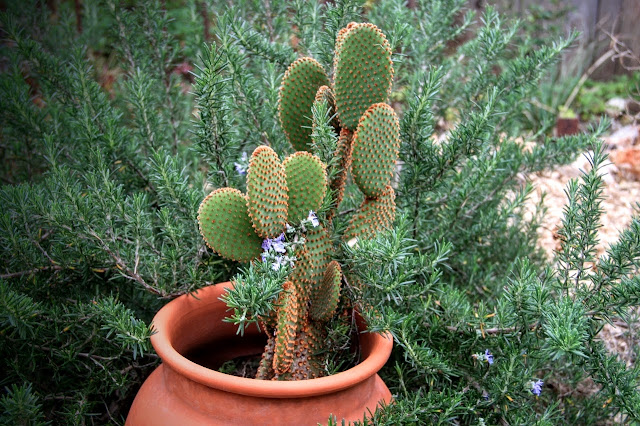 Texas Bluebonnets (Lupinus texensis) just peeking out, a bit early but it's definitely an early spring shaping up. 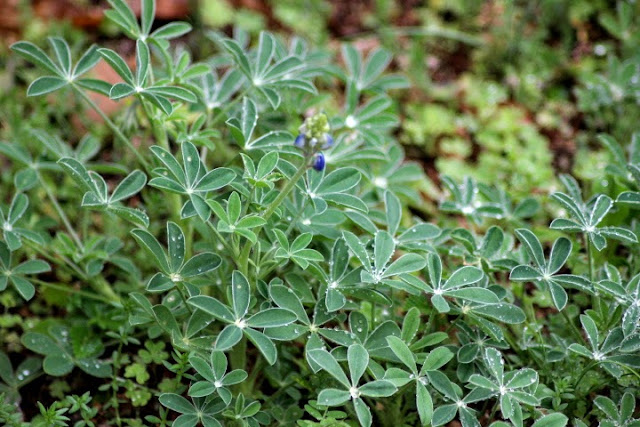 Beaded rain droplets seem to defy gravity along the edges of the foliage. 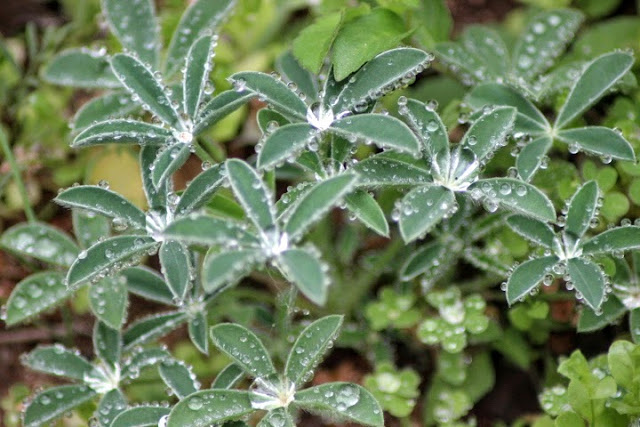 Cool mornings and warmish days have made it a pleasure to spend time in the garden the last few weeks.
Posted by Shirley Fox at 9:42 AM