No, this blog is not being cancelled though it has been a while since I posted.  Lately I have favored more direct social media like Instagram.  That is until I was labeled as possible misinformation.  My offense?  Posting a photo of a t shirt. 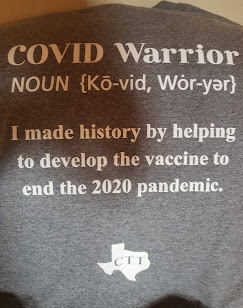 Neal received this shirt in August when he was given a shot in the Moderna Covid-19 vaccine trials.

We had both signed up for the study at Clinical Trials of Texas (CTT) the moment we heard about their need for thousands of local participants.  These are Stage III trials meaning that the vaccine had already passed basic safety testing on a limited basis and was ready for a wider population.  A chance to help out in a low risk scenario with a 50-50 shot at getting vaccinated early was our motivation.

We were interviewed about our health and placed in the queue after initial qualification.  He was contacted for an appointment in the Moderna trial and I was to await notice of the Pfizer trial.  Neal went in right away and got his shot in late August and a second shot a month later.

I thought it would be fun to post the shirt and a little about his experience.

Not so fast.  The genius Instagram censors decided to slap me with a label and I deleted the post immediately.

San Antonians stepped up in big numbers so the Pfizer vaccine trial also filled up before I could get an appointment.  Last week it was my turn to get the shot and a cool blue t shirt.  My trial's sponsor is Johnson & Johnson and the trade name is ENSEMBLE. 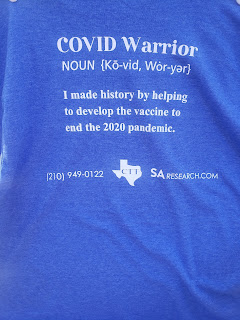 According to our initial briefing and the J&J website this vaccine is the best option for worldwide distribution as it can be shipped and stored in a refrigerator at 35-45F or even on ice instead of a specialized deep freeze.  ENSEMBLE is the first to test just one dose instead of two which also makes distribution easier in remote areas.

The participant process is straightforward but time consuming.  I'd compare it to starting over with a new doctor, they will ask every detail of medical history back to childhood and that takes a while over the phone.  Then you review it all over again at an in-person appointment which takes up most of the day. You will have your blood drawn and the nasal swab Covid-19 test.  If you qualify after a physical and consult with one of the study doctors you will get either a vaccine or placebo saline shot the day of your appointment.

We downloaded an e-diary app to track any reactions and/or symptoms experienced after the vaccine.  While we are considered volunteers, participants do receive some compensation for their time via an e-payment card which is funded based on meeting certain milestones.  All of this is explained in detail during a preliminary briefing and in written documentation which you sign along with consent forms.  While the study lasts two years, we were assured that ethics required they reveal whether we had the vaccine or placebo once FDA approval is granted and a viable vaccine is widely available.  This will likely occur during the next year.

The staff at CTT is excellent and patient focused.  Expect to sit a while in a very cold waiting area which was good for the busy staff but it took me a while to warm up once I got outside on a very warm 89F November day.  I was advised to be especially careful the next few weeks because contracting Covid-19 on top of the vaccine could worsen symptoms.  Otherwise, the biggest risk factor seemed to be spending most of the day indoors with a group.  Masks are required and social distancing is clearly marked on floors and chairs.

I received my dosage on Thursday afternoon.  Friday morning I awoke feeling quite tired and somewhat stuffy similar seasonal allergies.  We were given an oximeter to keep track of our oxygen levels and pulse so I began to test every half hour or so.  I was surprised to note my oxygen level did drop slightly for several hours and I had an elevated temperature for about the same length of time.  None of my symptoms met the specified level at which I should call their emergency line so I recorded them in the e-diary which continued to prompt me for input.  By Saturday afternoon I felt just fine and still cannot say whether I had the real vaccine or placebo.

This morning, Monday, I received a call from a CTT researcher to review the symptoms I reported over the weekend and check my progress.  After consultation with the doctor, she told me to begin reporting just twice a week until my follow-up appointment in January.  Neal also experienced an elevated temperature along with a sore arm after his vaccination in August.

A bit more about our experience with vaccines.  Neal was quick to volunteer for this study even though he was once intentionally injected with live Swine flu vaccine which he was not allowed to decline as an active duty Air Force officer.  He was very ill for several days but did recover well.  The same year I believe I had both the Swine flu and the Russian flu within about 6 months though I was not tested.  I was very ill for about two weeks and took several weeks more to feel back to normal.  For that reason we have both taken the annual flu shot for 42 years in a row.  With no ill effects unless you count a sore arm and occasional tiredness the next day.  That's nothing compared to being ill with the real flu which is something neither of us choose to experience again.  During our years riding crowded Metro trains in Washington DC winters we did contract an occasional virus and possibly a mild bout of flu.  We strongly believe that our annual flu shots help prevent flu and/or lessen the symptoms if we do get it.

So why did I decide to blog about this instead of my usual social media post?  I thought you might have a few questions and it's way easier to write long responses on a laptop keyboard than my phone.  The above paragraph likely would have triggered the censors at Instagram to slap another potential misinformation label on my opinion and personal experience.  More importantly, this is where I can say what I think and add my own labels.