Meet Xanthisma texanum or Sleepy Daisy, a native Texas wildflower so pretty that it's considered a show stopper at Annie's Annuals all the way over in California.  If you are familiar with Annie's Annuals you'll know a plant has to be special to stand out in their beautiful displays.  It's Wildflower Wednesday and I'm joining Gail at Clay and Limestone where garden bloggers are invited to report on wildflowers in their gardens the fourth Wednesday of each month. 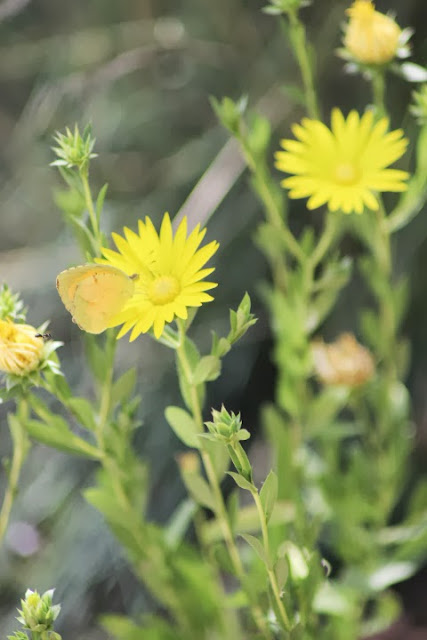 Back in the spring after touring gardens all around Austin for Gardens on Tour sponsored by the Lady Bird Johnson Wildflower Center I headed over to see the wildflower center gardens.  I hadn't been there for a while--since they first opened which was back in the mid-1990's and the admission to the gardens was included in the tour ticket.  I arrived with the heat turned up to high, the sun high in the sky, and facing a bit of garden tour fatigue with just about an hour and a half to go before closing time.  After a fairly quick tour with equally quick photos I headed home.  Over the next week I posted the five gardens from the tour and planned to get back to the wildflower center photos later.

Now is later isn't it?  It's fun to go back in time and see how pretty the gardens looked that day.  Perhaps it's the faded brown of late summer putting things in perspective but the gardens looked better than I thought at the time.  Wildflower Wednesday is this week and why not start the week off with a visit to the place which claims wildflower.org as its web address. 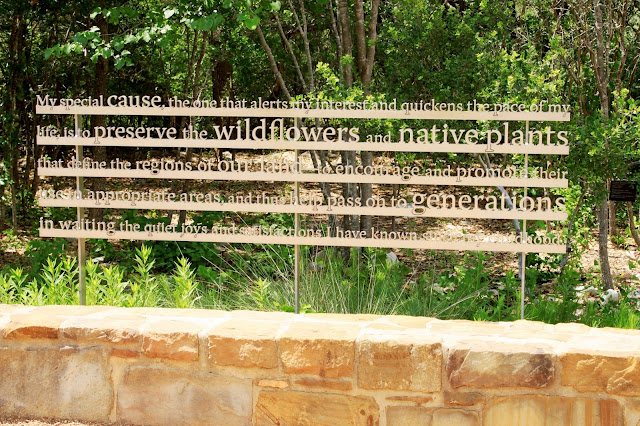 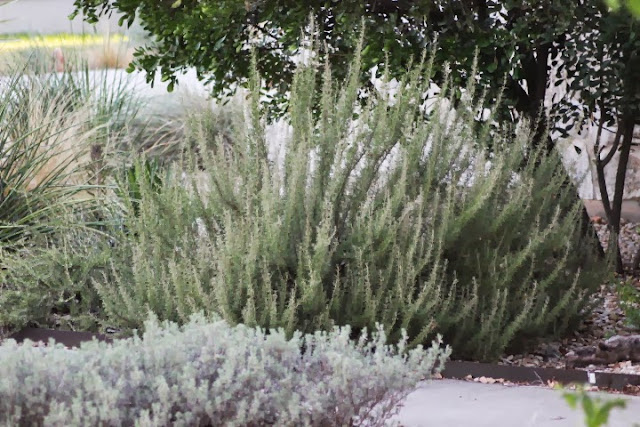 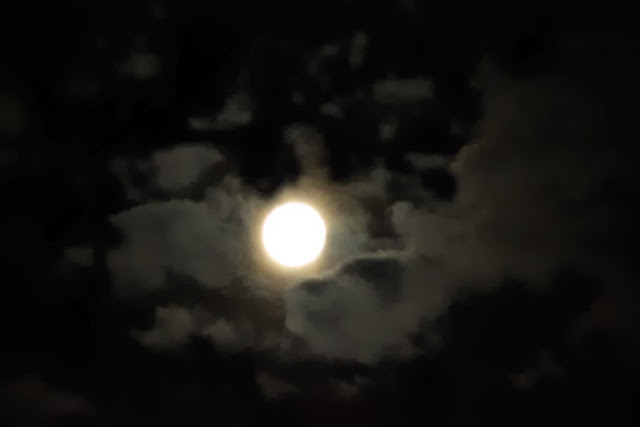 While we enjoy our annual visits to Dallas we don't enjoy five hours of dodging trucks on I-35.  As a major route running 1500 miles from Mexico to Canada, I-35 is pretty busy most of the time so this year we avoided the traffic and headed to Dallas by way of US 281 through the beautiful Texas Hill Country.  This route was so much fun we returned along the same route a few days later even though it takes a bit longer.

It's a two-lane road much of the way with passing lanes on the hills so traffic moves along quite well.  We stopped a few places along the way, especially when checking out ranch gates like this one which is a favorite way to pass the time....

...and at other times I snapped photos out the window at full speed because there is no safe place to pull over.  This photo of native yuccas and wildflowers blooming on ranch land is an example of the latter.  Those fuzzy white spires behind the fence are all yucca blooms and this view went on for miles. 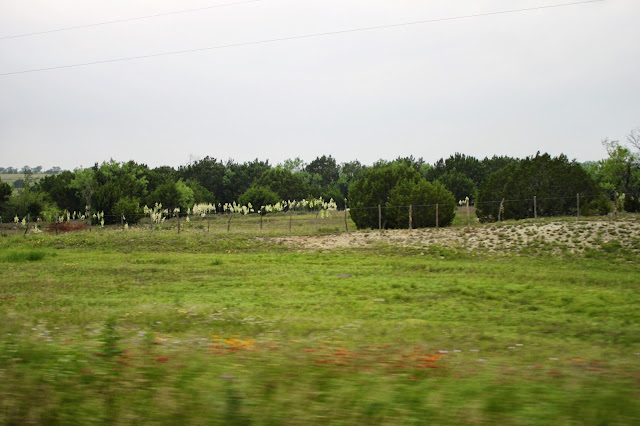 Foliage Follow-up is hosted by Pam Penick at her blog Digging  for bloggers to highlight our garden foliage on the 16th of each month.  For August I'm featuring blooming plants without blooms and a selection of plants doing well in our high summer heat.

How will that plant look in the heat of August?  That's a question I often ask when selecting new plants. August is not typically a great bloom season in my garden and it's a time when the foliage itself needs to shine.

That doesn't mean blooming plants are out of the picture.

The scene this morning in my front yard.  Many of these plants produce blooms throughout the year but are not blooming now yet they still add to the landscape and I enjoy the subdued colors in this part of the garden.  Earlier this week I trimmed the last fading flowers from the Salvia greggii (in the foreground) and gently shaped them into mounds so they will look good through the next few weeks before being covered with blooms again this fall.  I've also trimmed the lantana (farther back along the driveway island and walk) to prepare for fall blooms. 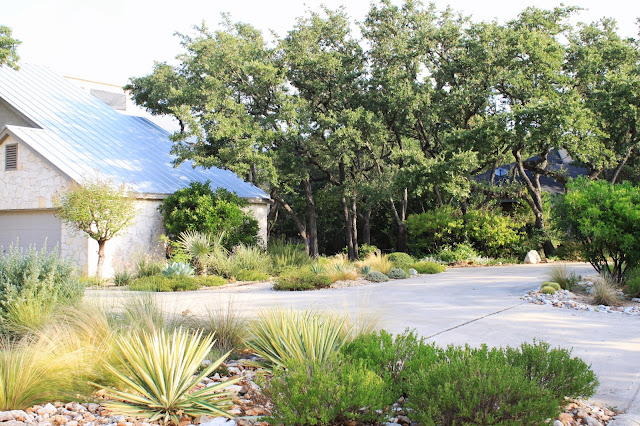 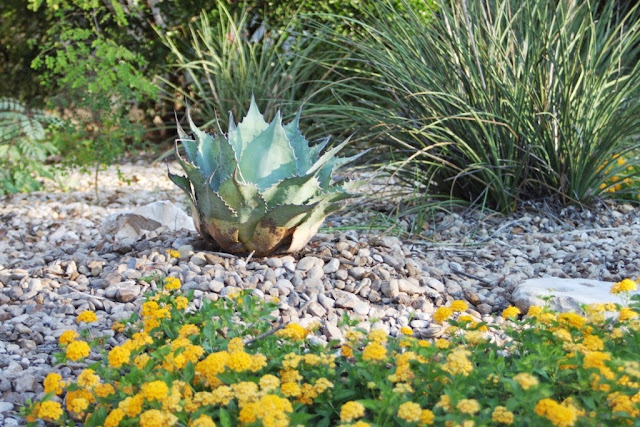 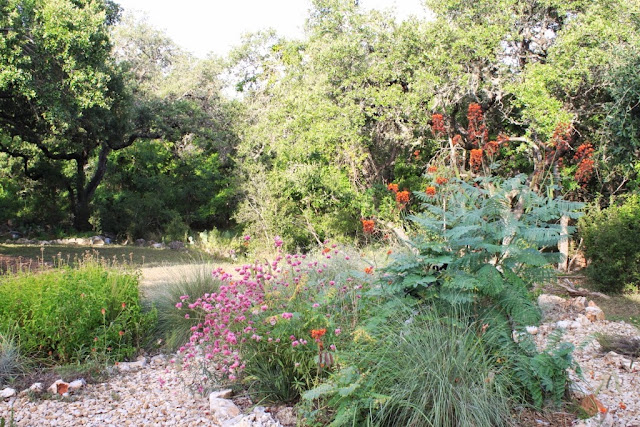 Sir Oliver "Smitty" Smith is well known in San Antonio for his pond and native plant gardens so I quickly accepted an invitation from a local gardening group to attend Happy Hour in his garden.

The party was mainly in the back yard so I took the opportunity to explore the lawnless front yard on my own. 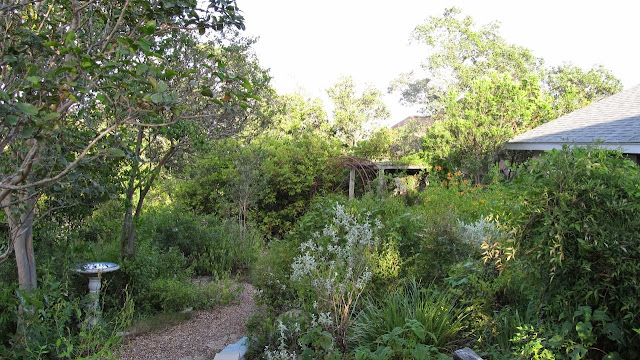