Plant ABCs is an ongoing series in which I am highlighting a plant from my garden for each letter of the alphabet.  I'm currently going through the entire alphabet A - Z, then will continue updating and adding plants to the list over time.  My previous posts in the series are on the "Plant ABCs" tab under the header.  Today's letter is "S" and Sophora Secundiflora is the highlighted plant. 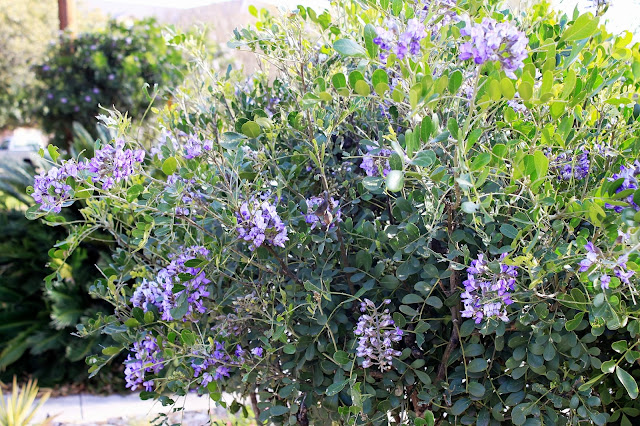 It always brings back special memories.  When I was about eight years old my dad brought some of the distinctive red seeds back from a trip to Austin to plant in our yard in suburban west Houston.  He began by scuffing the seeds with a file and soaking them overnight.  While I observed the process, he told me about this special evergreen native plant and the beautiful blooms it would produce.  He often talked of his childhood in Austin and the fun of exploring his grandmother's ranch in the hill country west of town with his brothers.  We made the trip out there several times a year, but I don't remember seeing the Texas Mountain Laurel in bloom.

I think he planted about five seeds and just one grew to maturity on a raised mound near the garage.  Considering Houston meets none of the soil or climate requirements of this plant except the heat part, it was quite an accomplishment to get one to grow at all.  Fast forward ten years and the first blooms appeared just about the time I graduated from high school.  The beautiful pea-like blossoms smelled just like grape soda and I was smitten. 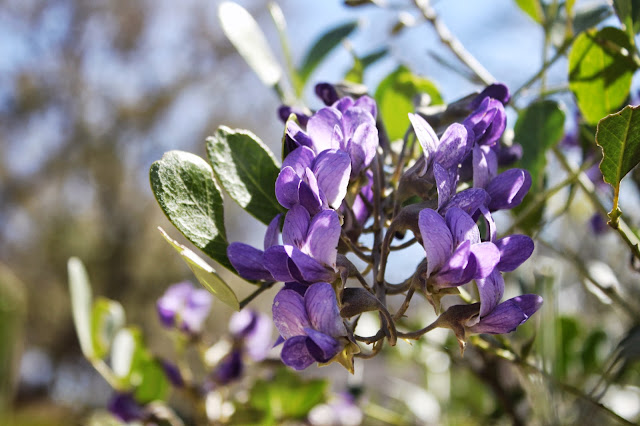 Fast forward a few more years and it was an absolute delight to find two beautiful Texas Mountain Laurels already planted in the front yard when we purchased our home in San Antonio back in 1995.  They are slow growing so this was a real bonus with the house.  Add that they are deer proof and exceptionally drought tolerant to the list of benefits and you have a great native plant for our region. 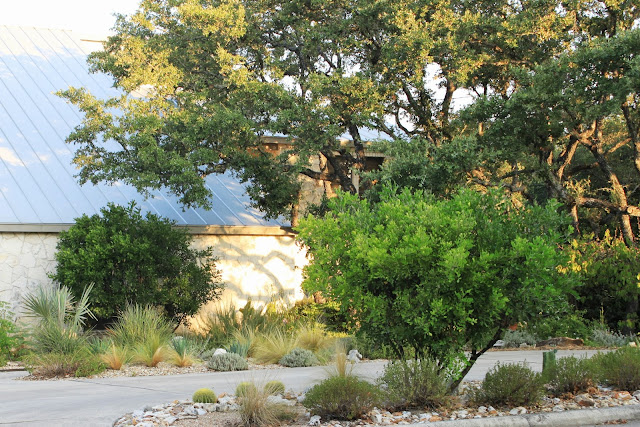 It's evergreen with a pretty structure so it looks great even when not in bloom.  These mature shrubs never get supplemental water yet easily endure even the most extended drought.  The more heat the better.  The Texas Mountain Laurel along the street is kept limbed up to show off the form while the one back by the garage (above) is left more natural and shrubby to hide the window a bit. 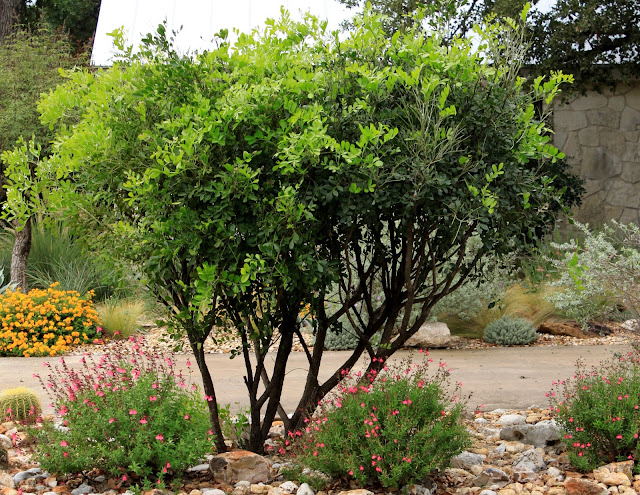 I was even more thrilled to find numerous wild plants growing along the creek behind the house.  You can see another young tree popping up just to the right.  The tough tap root motors right through the caliche. 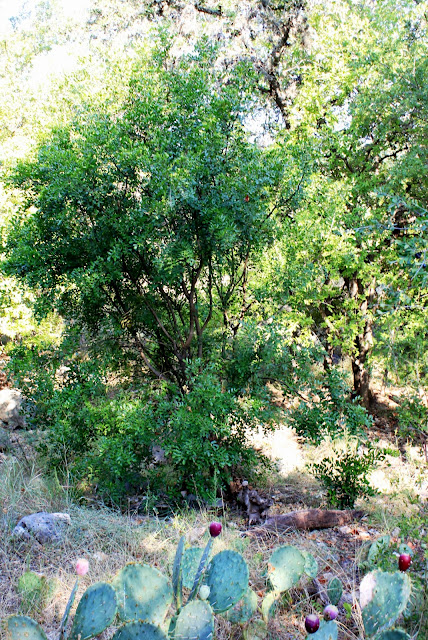 Two years ago I added a Sephora Secundiflora 'Silver Peso' to the front yard.  The 'Silver Peso' leaf is softer and the deer nibble regularly so it has to be caged until it matures.  The once silvery leaves are also turning greener over time so this one has been a bit of a disappointment. 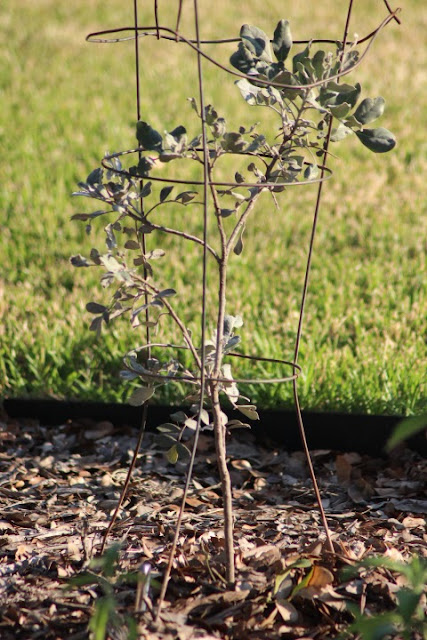 The blooms give way to brown seed pods by summer's end. 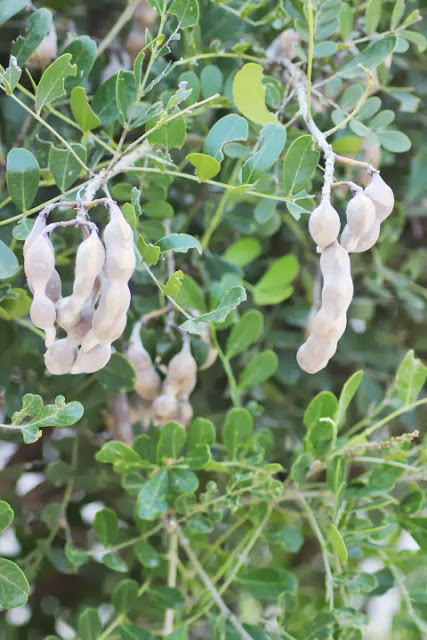 The red seeds are sometimes drilled and strung into necklaces.  The seeds are poisonous if ingested but I have never experienced a problem from handling them. 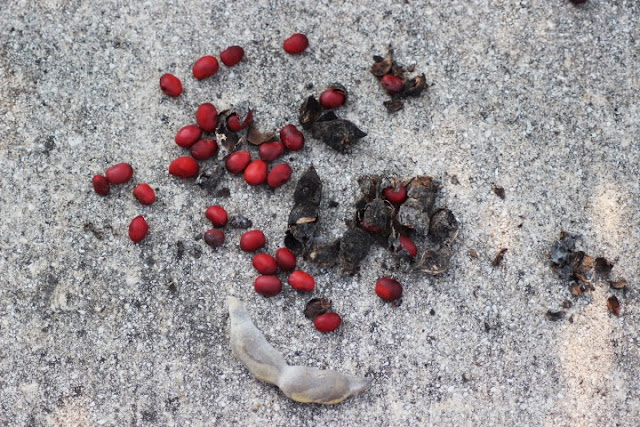 A couple of dropped seeds have sprouted in the gravel near the driveway.  These will most likely be removed since the long tap root means they don't transplant well. 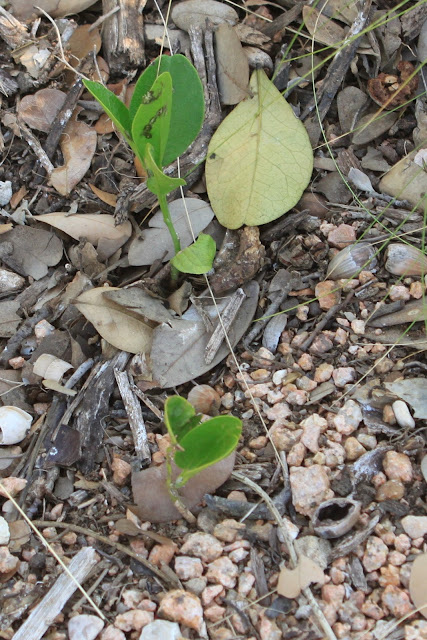 We planted one from seed to disguise the light pole and street sign 15 years ago and it's now blooming beautifully each year.  The Texas Mountain Laurel is native to a narrow range of Texas and, due to its drought and heat tolerance, has become increasingly popular throughout the desert southwest. 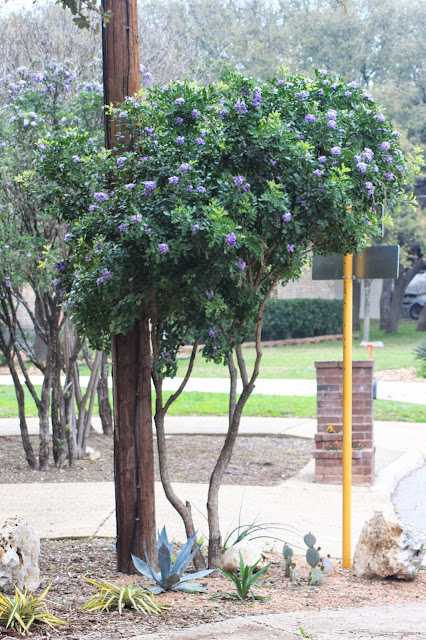 Those blooms are amazing. 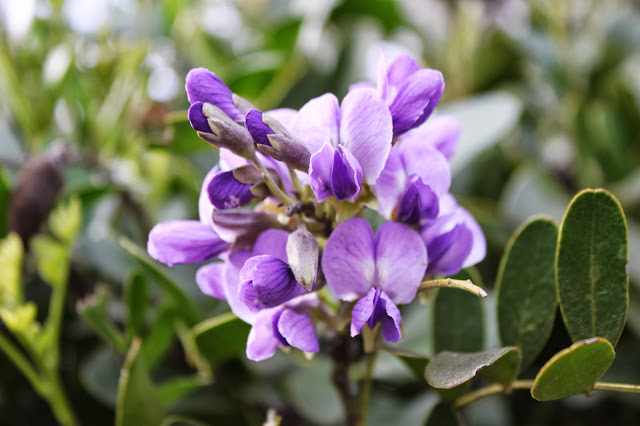 The Texas Bluebonnet is the iconic native Texas wildflower, but I would submit that the Texas Mountain Laurel just might edge them out in the hearts of those of us who live where this plant grows so well.
Posted by Shirley Fox at 9:15 AM