When a new landscape isn't enough

There are some things even the best landscape plan can't fix.  Sometimes the house just needs a makeover to improve curb appeal.  Since it's quite slow in the garden right now (shhhh, don't wake the dormant plants...) I'm going back in time to show the roofing project we completed three years ago this week which greatly improved the appeal of the entire house-scape. 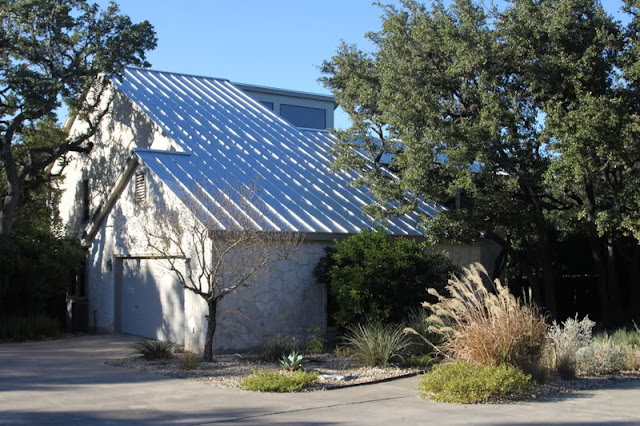 The original plan for our house specified a metal roof and the builder must have cut back because the house was finished with a composition shingle roof in dull brown.  Combine this with a sea of river rock spread under the oaks in the front yard and you might understand why the realtor didn't even want to get out of the car back in 1995.  "Move on" she said, "no curb appeal". 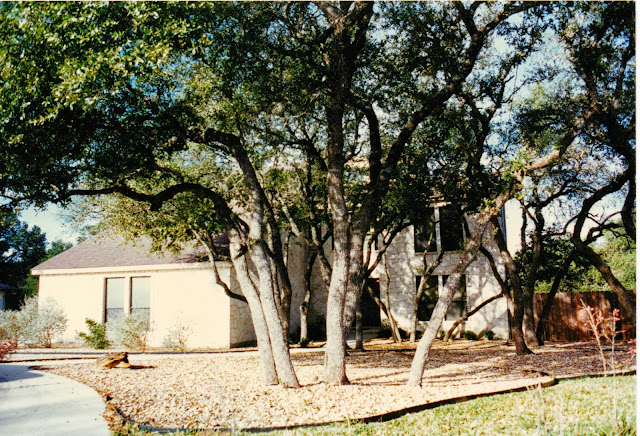 Not so fast, the house was nice inside plus we liked the trees and the location so we ended up buying the house well under the comps for the neighborhood.  Then two years later we reluctantly left it to renters for eleven years.

Retired in 2008 and back in the house we began making landscape improvements right away. 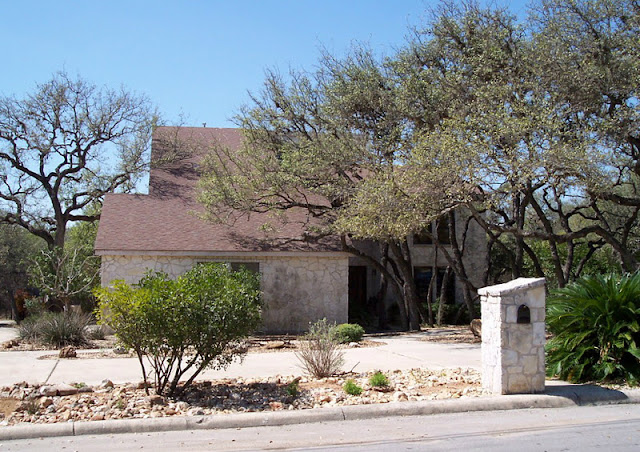 That's better but it needed more.  By 2010 the roof was approaching 20 years with heat and hail also taking a toll.  We knew we wanted a metal roof and there was really no second option to consider.  We began getting estimates just as the recession was kicking in and a highly-rated local company gave us a very reasonable price so we jumped on it.

We painted the trim before the new roof went on.  The old trim was beige which had turned pink in the sun.  We changed  to a soft gray-green which will gray as it fades.  No more pink trim and a good powerwashing cleaned up the stone nicely.  Some improvement but the roof would be the big event. 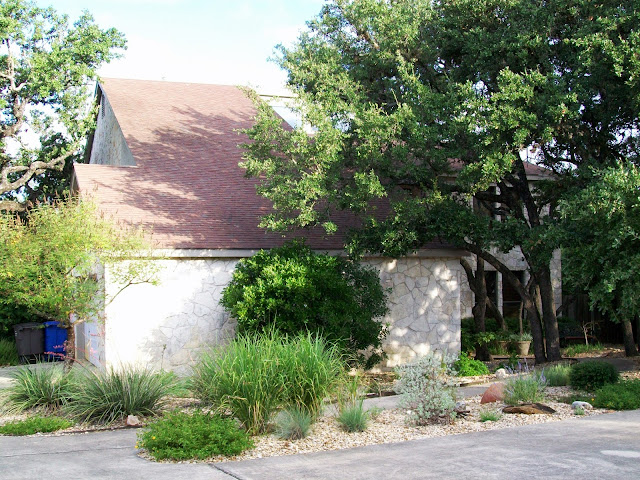 The first step to a new roof was to remove the old shingles which made a huge mess.  I still find little bits of shingle in the flower beds.  As soon as the shingles were removed, the crew repaired the roof deck as needed and then covered it in roofing paper.

Once all that was done they started making the steel panels which were rolled with a machine on a trailer in the driveway. 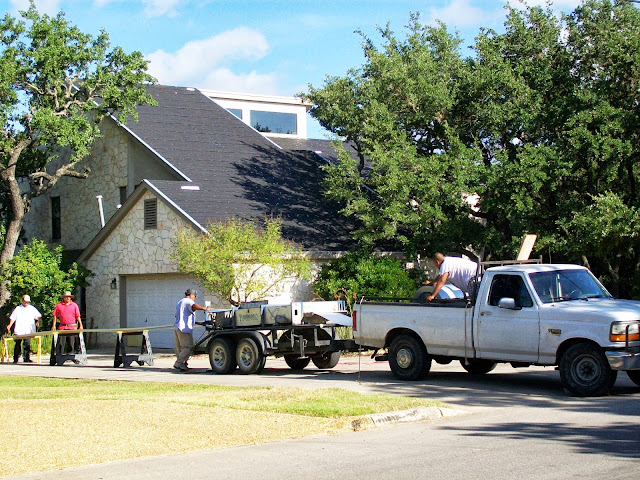 Cut galvalume steel panels laid out in the driveway at the end of day one.  The roofing paper already looks better than the old shingles! 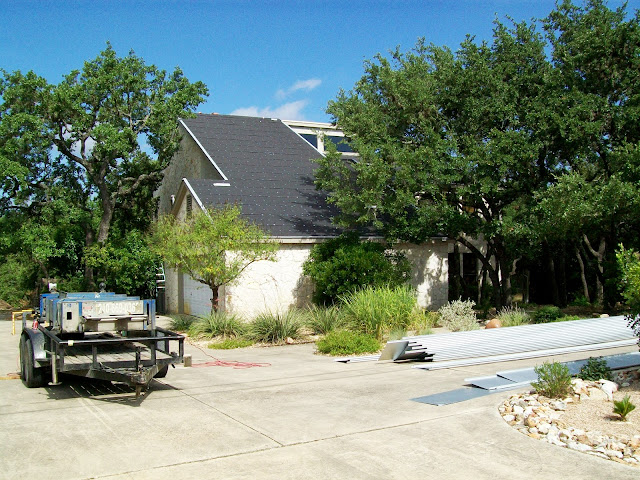 The garage roof is the most prominent roof feature and can be seen for several blocks in both directions along the street.  I kept a close watch on this part of the project.  Since it was the key to the entire project looking good, they spent some time planning to get it properly aligned.  As a crew they took great pride in doing a good job so it worked out well.  A big moment was when they put the long pieces over the garage.  49'-6" is the length needed here and 50' is the longest roll of steel available so we just made it with a bit of overlap for trimming. 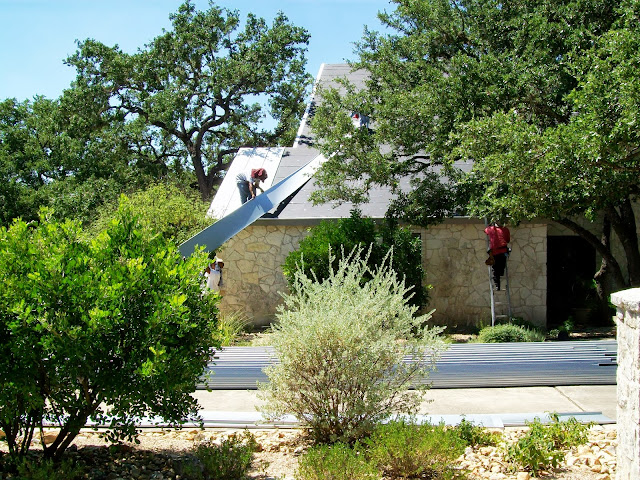 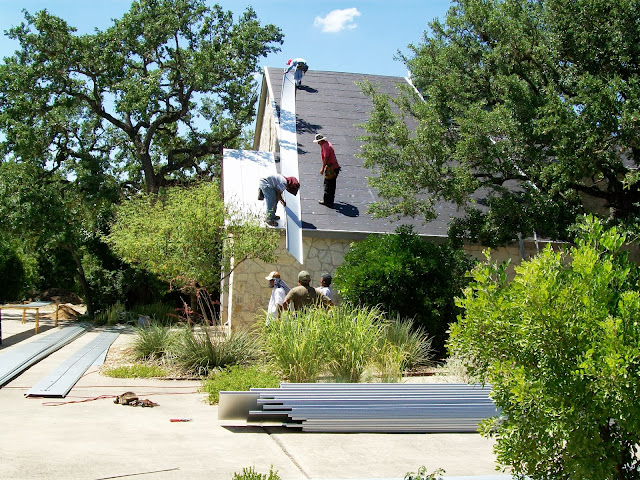 It was very hot,  up to 105F one day and I couldn't believe they kept working. 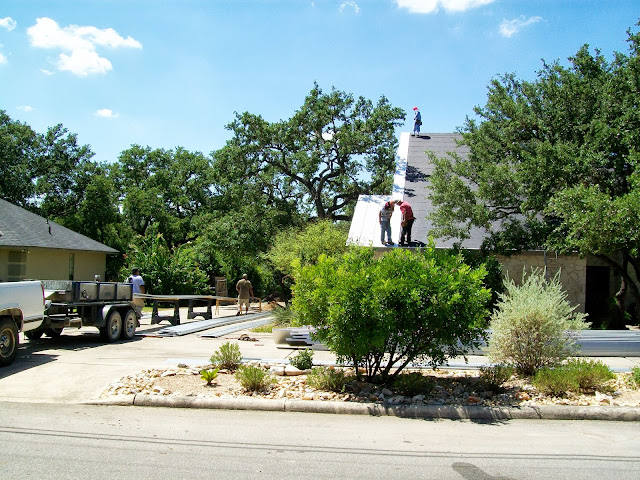 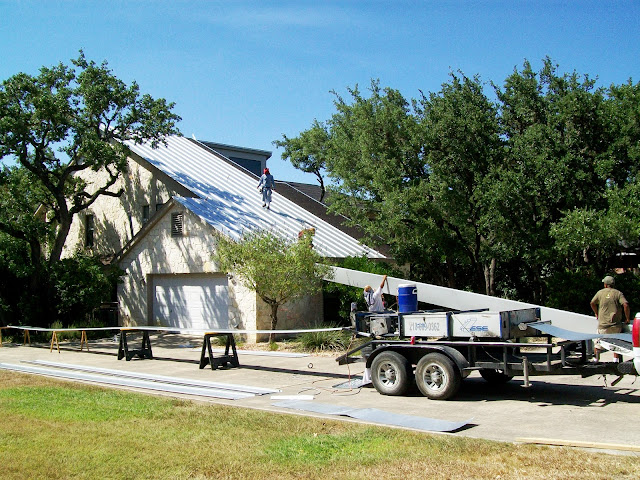 It's a long way up there pulling heavy steel panels. 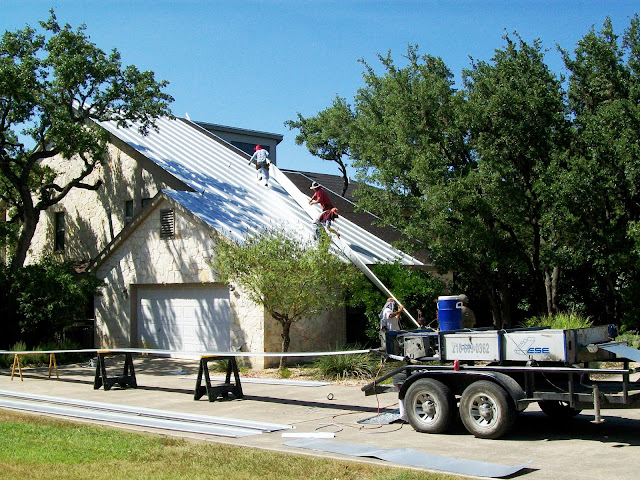 Once the long panels were in place, we could all breathe a little easier. 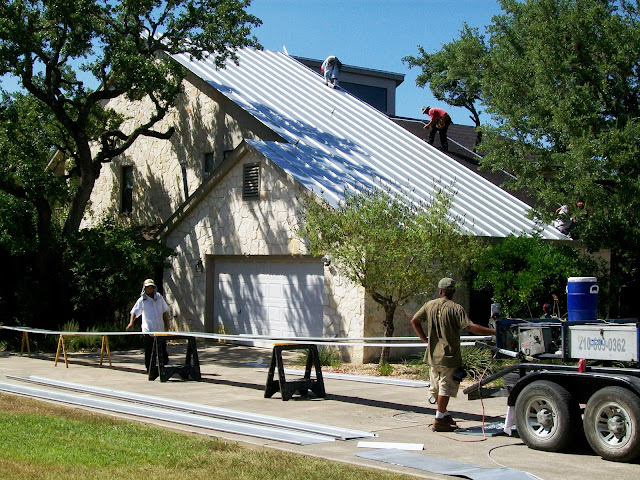 The roofers kept working their way around and did slow down with frequent breaks when it was hot so it took them several extra days to complete the work.  We want everyone to be safe so no complaints. 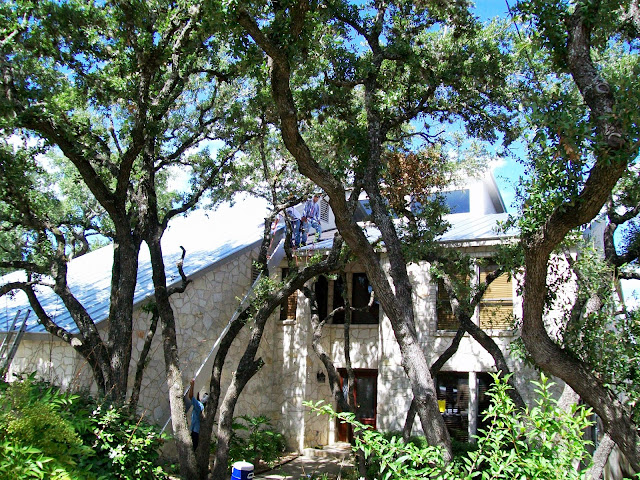 The new metal roof helps a lot with summer energy consumption as well.  Reflecting the sun away has kept our attic and garage much cooler which has brought energy bills down.

My husband climbed up with his camera to take a look.  The natural steel roof is shiny and new in these photos, but it has taken on a patina in three years.  Pre-aged roofing panels are available for an extra cost, but we decided to let it age naturally. 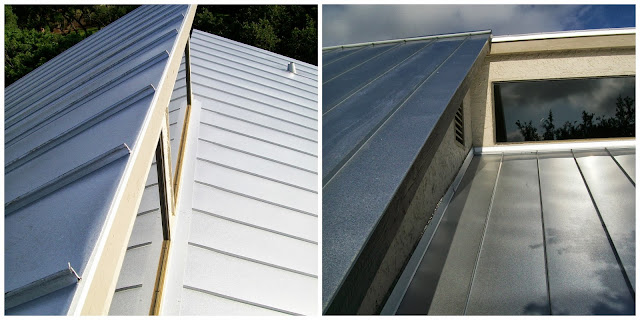 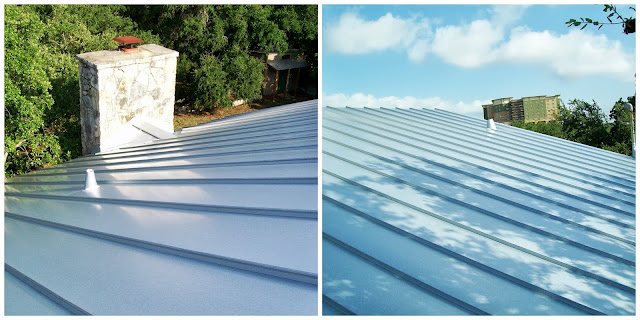 I've been up there but not since the much more slippery metal roof has been installed.  Whoa, that's steep! 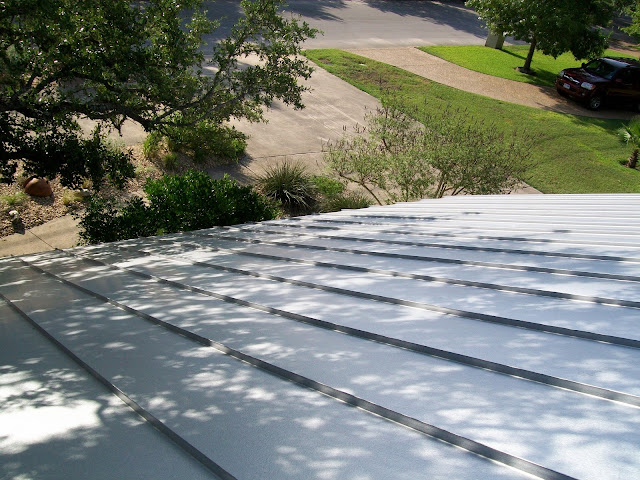 Looking back I can see a lot of positive changes.  One more before and after, the changes are still amazing to me as I go back through these photos.

Before, in Winter 2009 a few months after we reclaimed the house from renters and hacked out the overgrown front yard. 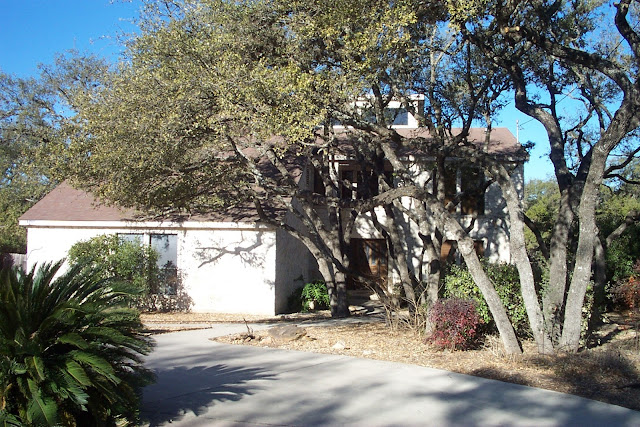 After, this is a similar angle from this past Sunday.  A much improved canvas for landscaping projects. 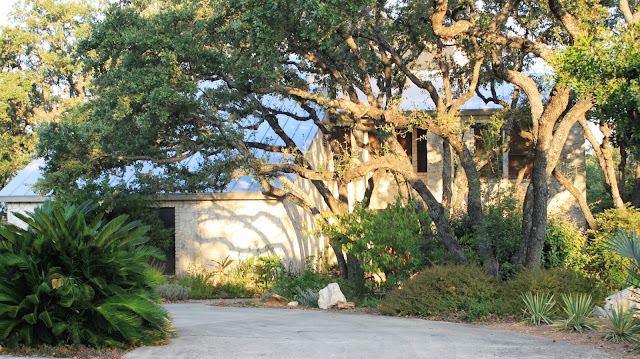 Now that's curb appeal!
Posted by Shirley Fox at 8:22 AM