Plant ABCs - I is for Ilex Vomitoria

My series the ABCs of plants in my garden continues with the letter I.  I is for Ilex Vomitoria or Yaupon Holly.

What a name!  Vomitoria?  Apparently early European settlers thought the native populations used the leaves as a tea to induce vomiting.  That turned out to be a misunderstanding since the active ingredient in the leaves is caffeine.  I found a few secondary references to the tea still being available in St. Augustine, Florida, but could not find the tea for sale.

While the yaupon holly is native to Texas, it is not native to San Antonio or the Texas Hill Country.  It is one of the few varieties of holly that will reliably grow in our hot, dry environment here.  There were other holly varieties planted years ago in the neighborhood, but many bit the dust in the recent drought.  Those varieties also prefer acidic soil, so they do not do as well as yaupons in our limestone soil.

The dwarf yaupon (Ilex vomitoria 'nana') is in my yard as a hedge, and this row along the front was planted by the original owners' landscaper. 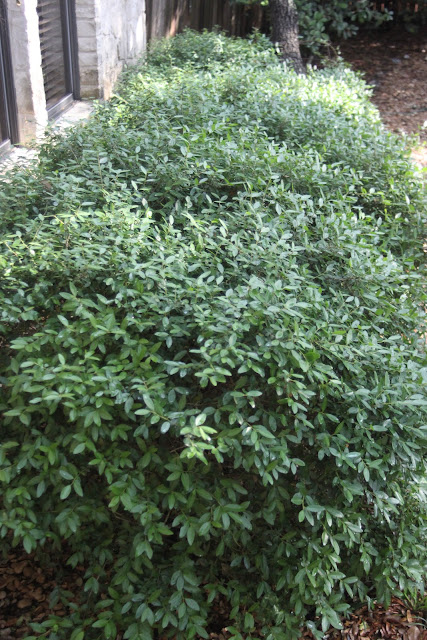 Yaupon holly is evergreen and very drought tolerant, we only watered this hedge a few times during the recent drought and never water the native ones.  These have reached their mature size at around 3' high and we keep them naturally shaped by only trimming a few rangy branches now and then.
This one dwarf yaupon in the driveway island intrigues me since it was not part of the original landscaping and must have been planted by renters. 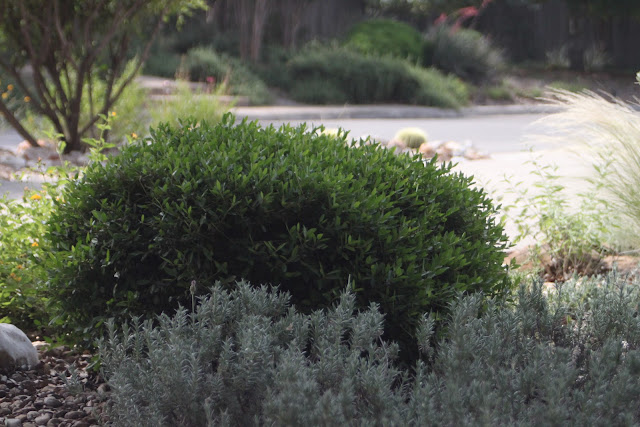 I kept it when we reworked this bed because it adds a green counterpoint to the mostly silvery plants here.  Just for fun, I keep it trimmed in a softly rounded shape to fit better with the style of this section of the garden. 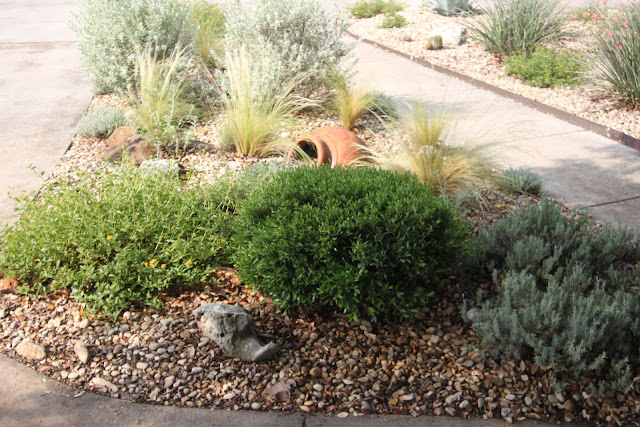 The yaupon holly is also available in a very attractive weeping form (Ilex vomitoria 'pendula') and I have just the place for two of those which I plan to add in the fall.  The Ilex vomitoria has been a great plant for my garden.
Posted by Shirley Fox at 2:42 PM