This spring we had a beautiful display of Texas bluebonnets in our back yard. 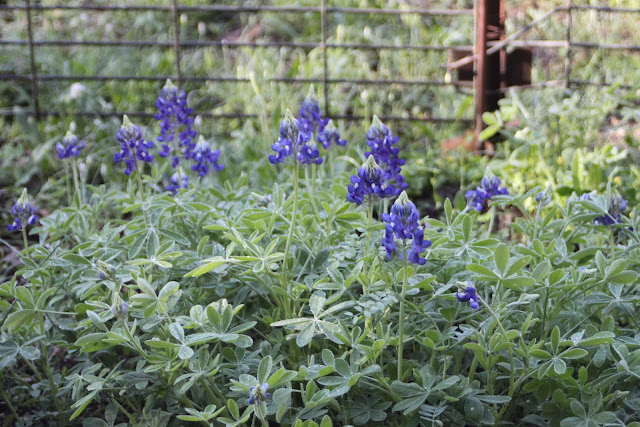 Pretty remarkable considering how few we had last year during the drought of 2011.  This photo is of the same spot a year earlier. 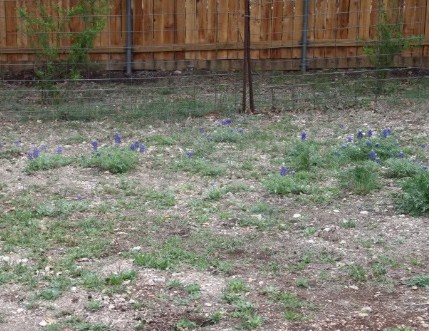 Even the few plants that sprouted last year did not produce many seeds. 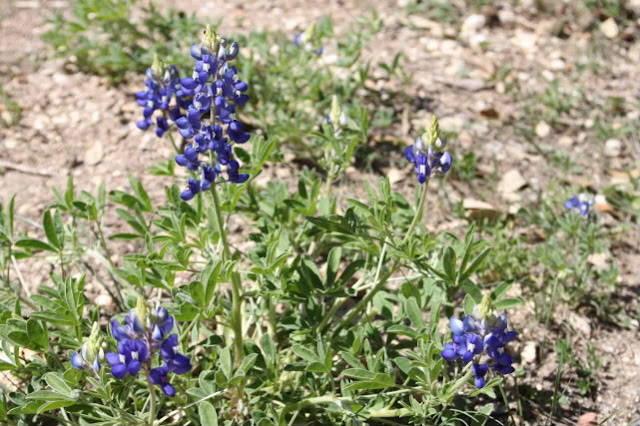 The drought led us to take matters into our own hands (literally) and collect the seeds for maximum germination rather than allow most of them to fall naturally.

Here is how we collected the seeds.  The photo below shows the plants ready to harvest this year.  We waited until the plants were mostly brown, yet still had a small amount of green.  That allows the seeds to get all the nourishment out of the plants, but any longer and the seed pods would start opening. 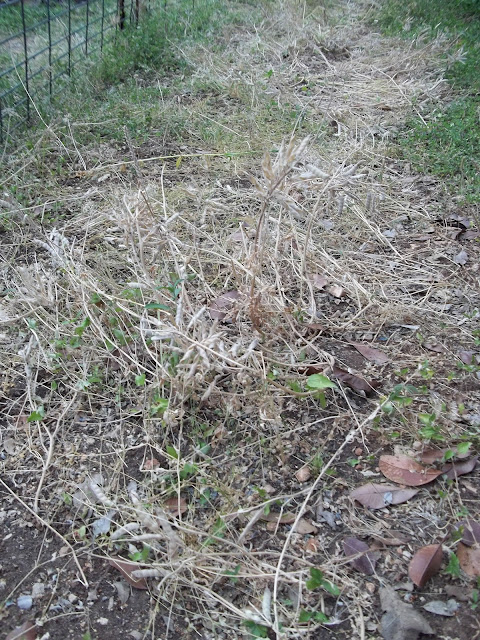 Since Bluebonnets are annuals, the plant dies as the seeds ripen so there is no issue with pulling out the entire plant.  Note how this one plant has over 100 pods, with five seeds in each pod.  Now that is a bountiful harvest. 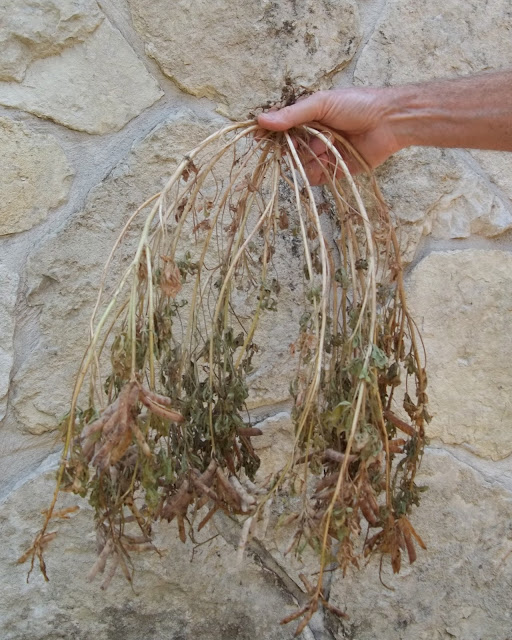 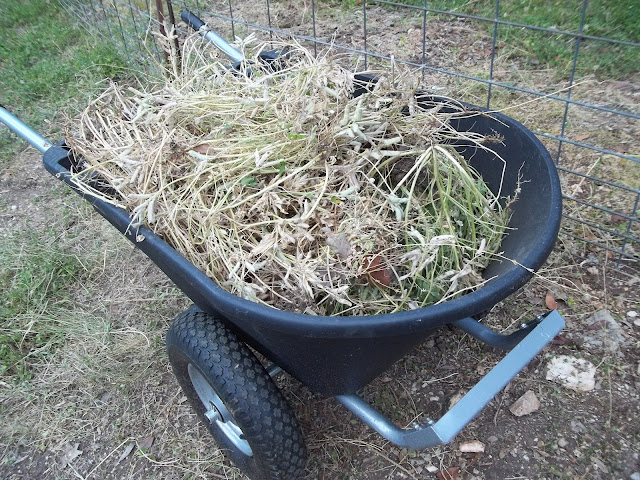 Here's a closeup of the pods, they spiral as they dry to cast the seeds away from the plants. 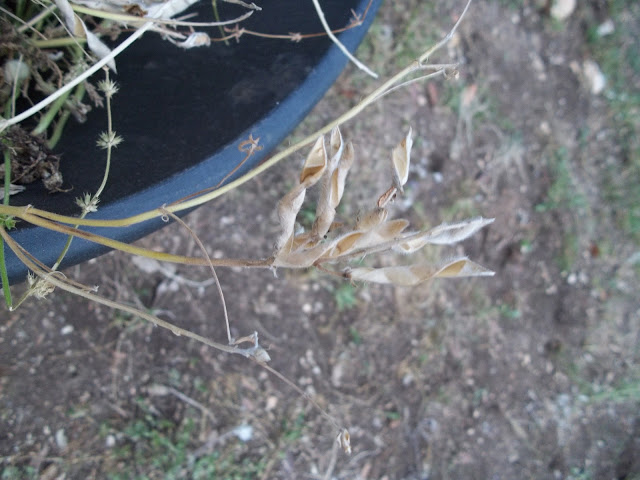 After the plants were dry, we cut the pods off the stalks and put the stalks in the compost.  We cut the pods off over a cardboard box, since seeds continue to fall out.  The cardboard box of seed pods then goes into the garage.  Seeds that fell out into the wheel barrow were put into a paper bag.  After a month or so we will remove the seeds from the box of pods and force out any remaining seeds that stick in the pods by stomping on those pods inside the box.  Sorry I don't have a stomping picture, but you get the point.

The seeds will be kept dry in the garage for several months until planting time in Fall, usually October or November.

Now we'll go back to the fall of 2011 to show how the seeds are made ready for planting...

As mentioned we stored the seeds in paper bags in the garage until Fall.  Just before a predicted three days of rain in late November, we gently rubbed all seeds between two bricks to score the hard seed coating.  This ensures greater germination rates. 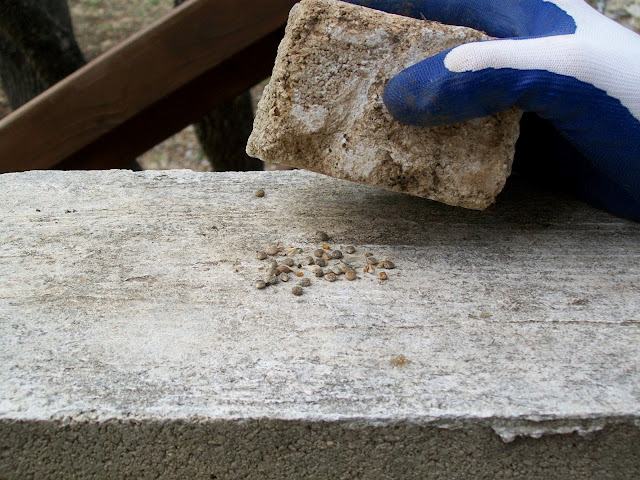 There are several keys to getting the scoring right.  The base needs to be slightly rough, concrete works well, and large enough so the seeds can roll without falling off.  Use a rough brick and work with light pressure in small batches.   Keep seeds of similar size together so they can be scored evenly without crushing the seeds.  It should take about 30 seconds per batch.  Work in small batches to ensure they all get the proper amount of scoring. 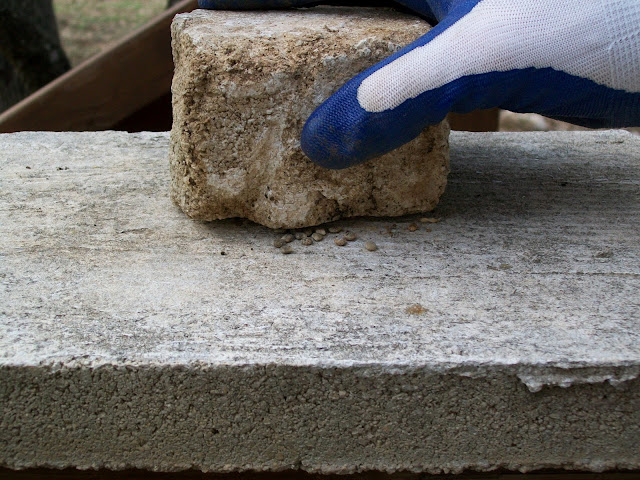 Then we soaked them in water for about two days before planting.

We scattered the seeds on top of soil that had been roughed up with a rake, and gently pressed them in so they wouldn't wash down the hill.  They should be planted fairly close to the surface, but generally covered by dirt so they will stay wet during germination.

Just a few days later, we found they had germinated.  The pre-soaking plus the rain did the trick.  When they first appear, the first two leaves are round and the next row are the star shaped leaves that form the rosettes.

After a few weeks the seedlings had formed rosettes and slowed down their growth at this stage during the winter.


I'd say we had a high rate of success because there seemed to be hundreds of seedlings everywhere.  Bluebonnets transplant easily so we moved those that were in the wrong spot.  Here's a closeup of one rosette. 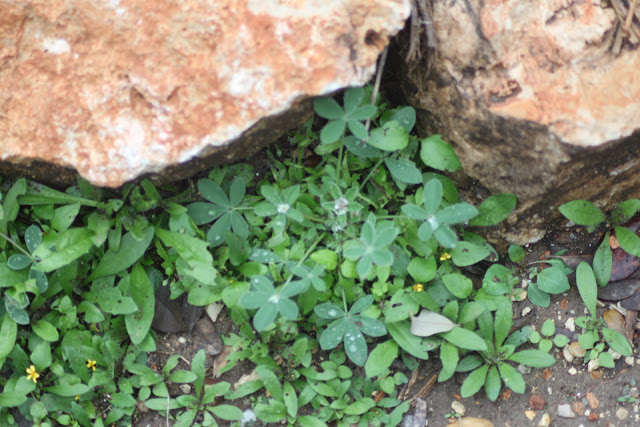 They grew all winter and produced a beautiful display in March. 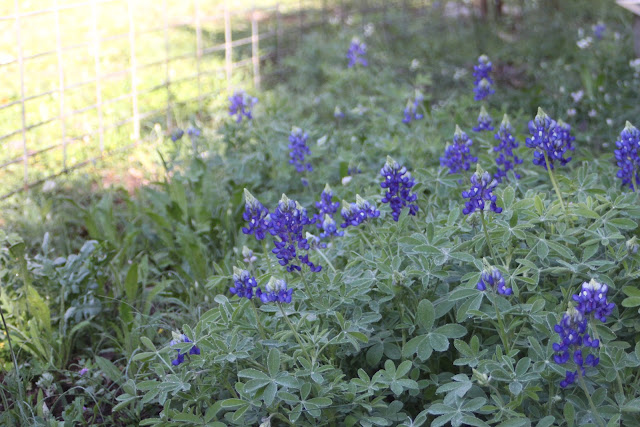