Recently I waded into the fray at the Master Gardeners plant sale to snag a newly introduced citrus plant named "Orange Frost".  Here it is in its new home in my back yard behind the garage. 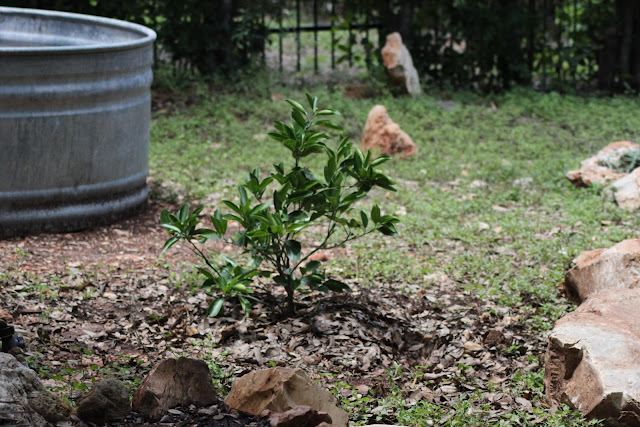 I've written before about our limestone rock and caliche.soil, which is a thin layer of clay-like soil over lots of rock.  Now it's time to show you what the planting process looks like. 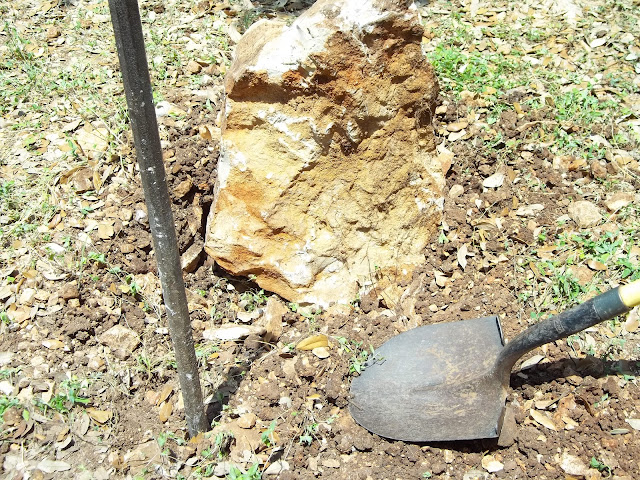 The process begins as Mr. R-O-D stabs the digging bar into the ground in several locations looking for a spot with "fewer" rocks.  In this case, the rocks were everywhere, so he just "dug in".  As is typical he hit rock almost immediately but was delighted to see it was a rather small rock which was easily pried out of the hole. 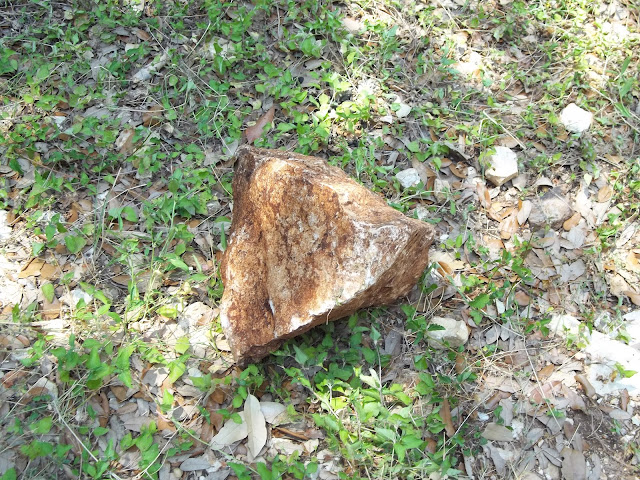 Then his delight faded as he found its big brother hiding just beneath that smaller one.  He tested to see if it was moveable, which is demonstrated by ground movement when pried upon.  It seemed moveable so he decided to go ahead and take it out because there was no clearly better spot in the vicinity.  Here he's using an iron digging bar to work the rock loose.  It looks like this one is small enough to remove.  If the rock is too large we would have to find another spot for the plant or install it in a raised bed. 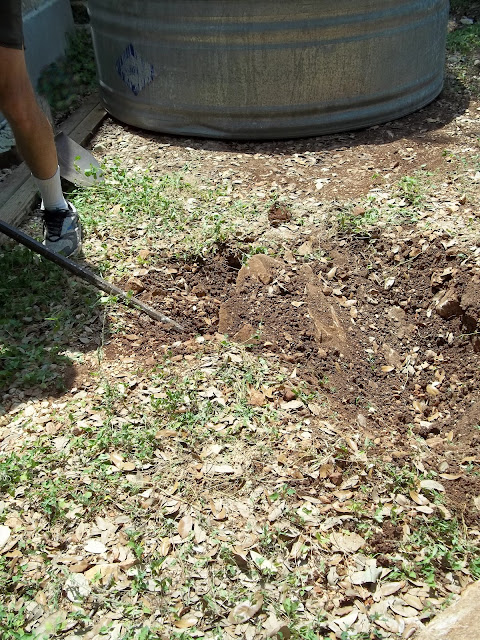 Finally the rock gets rolled out, it's about 150 lbs. and will stay right here until we decided where to put it. 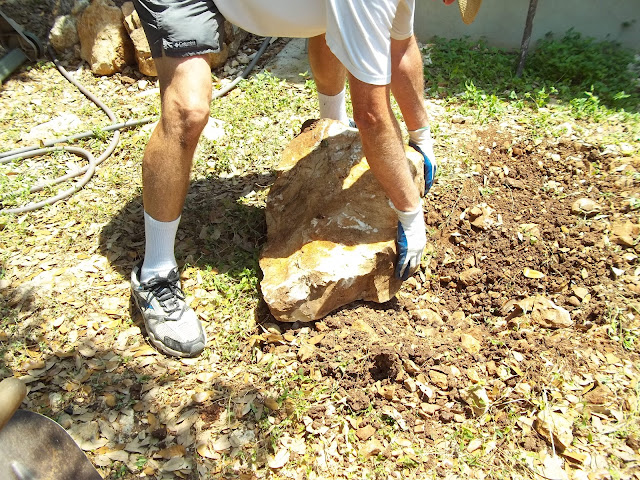 Now for the next rock in the hole, likely a cousin to the other two.  This one is even larger but still workable so he works this one loose too.  Delight is a thing of the past as this one is stubborn.  At this point I put down the camera and help wedge the first rock under the second so we can lever it out. 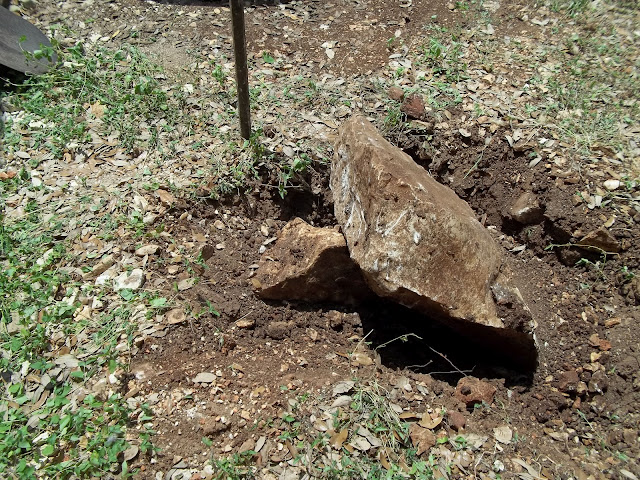 Whew!  Finally this one is out too. 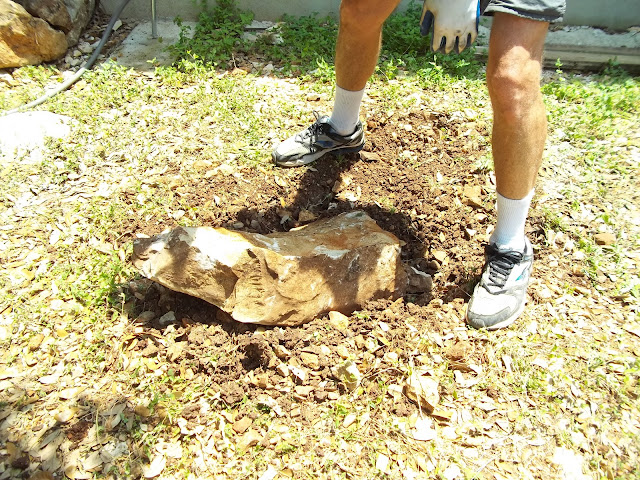 Now he turns his attention to creating a planting hole for the tree. 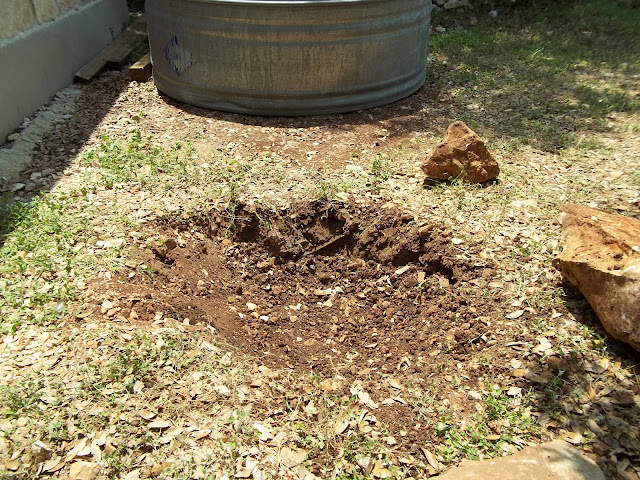 In this wheelbarrow is the caliche soil removed from the hole.  You can see how chunky and rocky it is. 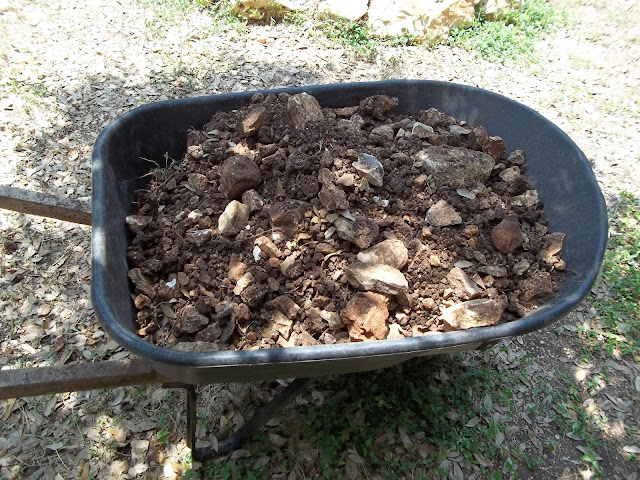 We will plant the tree with top soil and compost around it. It's interesting to note that once a tree is established the roots will find their way into the pockets of soil between the rocks.

'Orange Frost' has settled into its new home and looking healthy after a few days of rain, and Mr R-O-D gets a few days rest before I ask him to plant something else.

And the rocks removed from the hole will find a home lining a new planting bed in the yard.  This is the process required for every in-ground plant or tree.  For most perennials we use raised beds lined by rocks.
Posted by Shirley Fox at 3:12 PM