A unique WWI Memorial is preserved in San Antonio

San Antonio is known as a military town so it shouldn't surprise me when I come across something special in honor of those who served.  In October I was invited to a tour of our newly opened Tobin Center for the Performing Arts built on the site of our old Municipal Auditorium.  I learned that the original building, which has been partially preserved during construction of the new center, had been built in 1926 as The Municipal Auditorium and dedicated as a memorial to those who died in WWI.  While there are a number of buildings and stadiums around the country dedicated to war veterans I don't know of another quite like this beautiful Spanish Colonial Revival structure.  It's fitting to feature this special memorial as remembrances of the 100th anniversary of the beginning of WWI are underway. 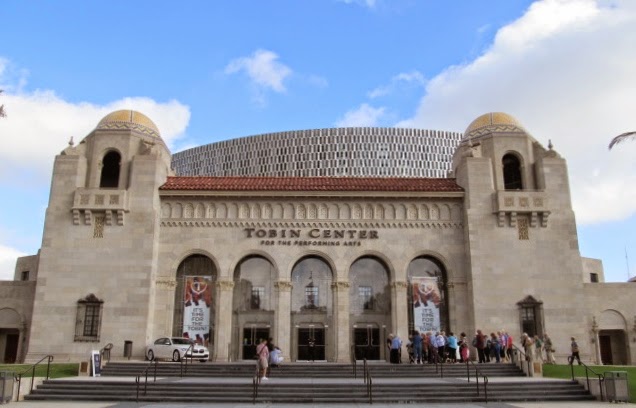 I did some research on the namesake Tobin family and found some fascinating facts.  The Tobin family were aviation pioneers, Edgar G. Tobin was a WWI flying ace, and developed an aerial mapping company after the war.  The maps were essential for the oil and gas exploration which brought so much prosperity to Texas in the 20th Century.  With their success they funded symphonies and libraries in New York, Boston, and Santa Fe along with funding performing arts in San Antonio.

The marble tablet seen ahead to the left along the walk is dedicated to WWI pilots from San Antonio.  Learning this was all very special to me since my paternal grandfather was a native of San Antonio and served as a WWI pilot after his graduation from The University of Texas in 1915.  America didn't officially join the war until April of 1917 and the war lasted another 18 months and we lost over 111,000 in that brief time. 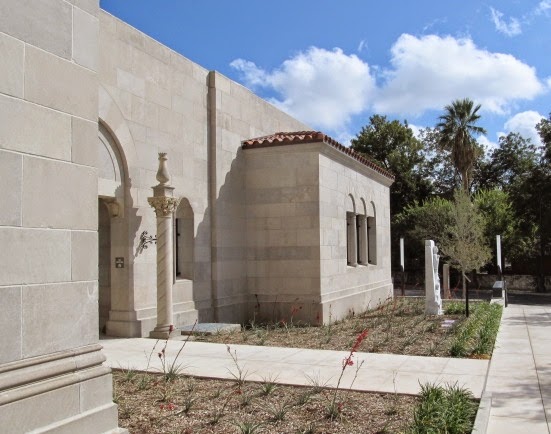 Unlike many of those who served overseas during that time my grandfather returned from the war and had a long career as an engineer for the City of Austin.  Perhaps he met members of the Tobin family along the way.

The Tobin Center is now part of the Veteran's Memorial Plaza which I also was not aware of until recently. 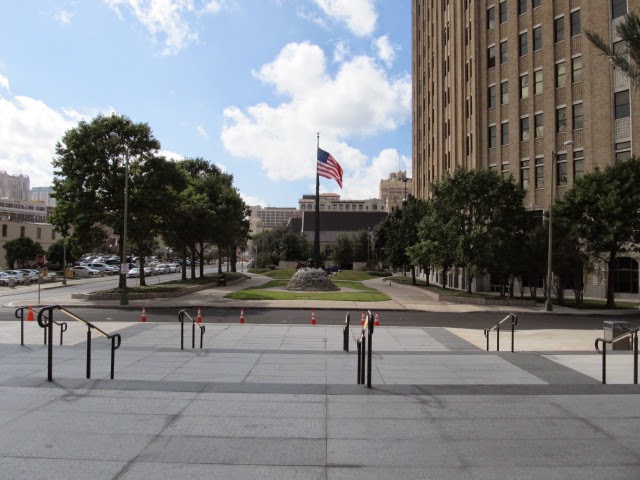 Looking across from the front of the Tobin Center with the sculpture dedicated to Korean War Veterans in the foreground.  There are also sculptures and plaques honoring veterans of other wars. 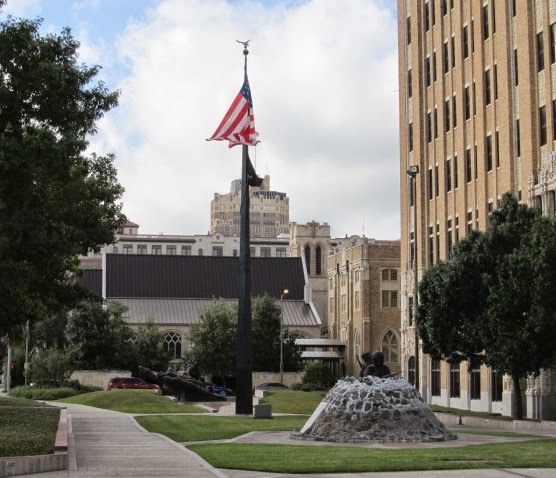 Fortunately much of the original facade designed by Atlee Ayers was preserved in the building of the new center.  This was not without a spirited public debate and a few court battles since it is on the National Register of Historic Places.  New glass inserts between the columns create a vestibule for the main lobby. 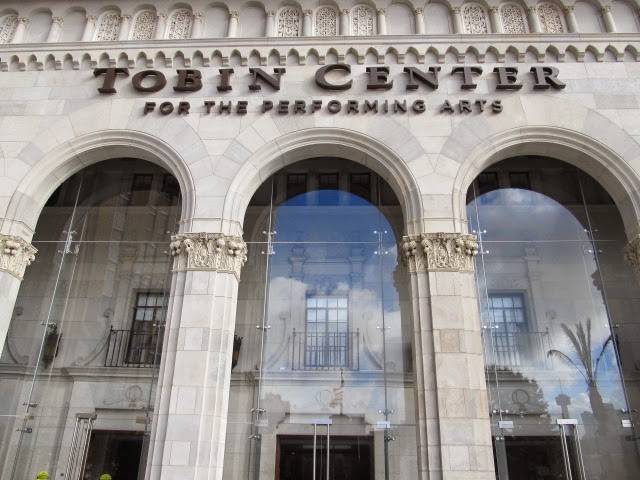 Inside original ironwork and lanterns still grace the facade. 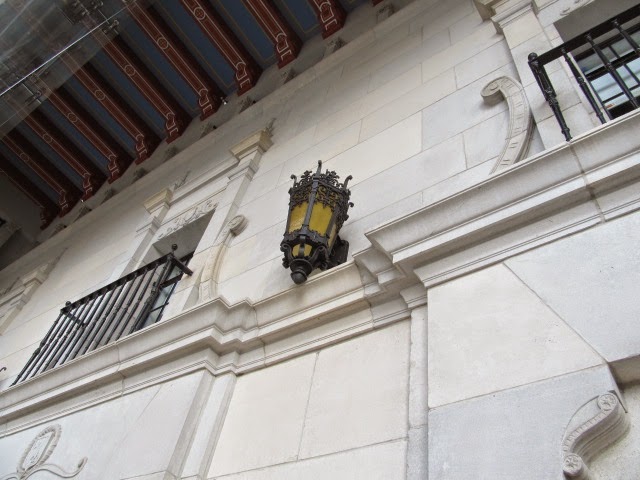 On the tour through the building and overlooking the River Walk plaza are bronze tablets dedicated to Medal of Honor winners from San Antonio.  These photos were taken from inside through the windows during our tour.  I plan to return in the spring to get a better look at the new plaza after the plants have grown in. 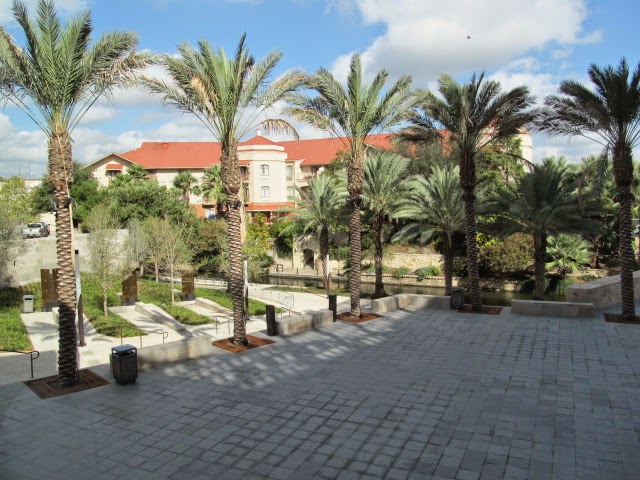 A closer view of the bronze tablets.  They really need to find another spot for the trash can. 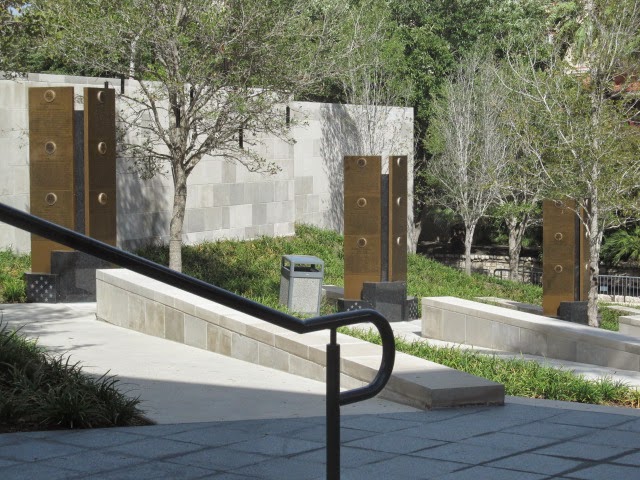 It was nice to get even more out of the tour than I expected and I'll give you a tour of the beautiful interior of the center in my next post.

Until then I'm sending a big Thank You and wishing all our veterans the very best on Veteran's Day.
Posted by Shirley Fox at 9:57 AM