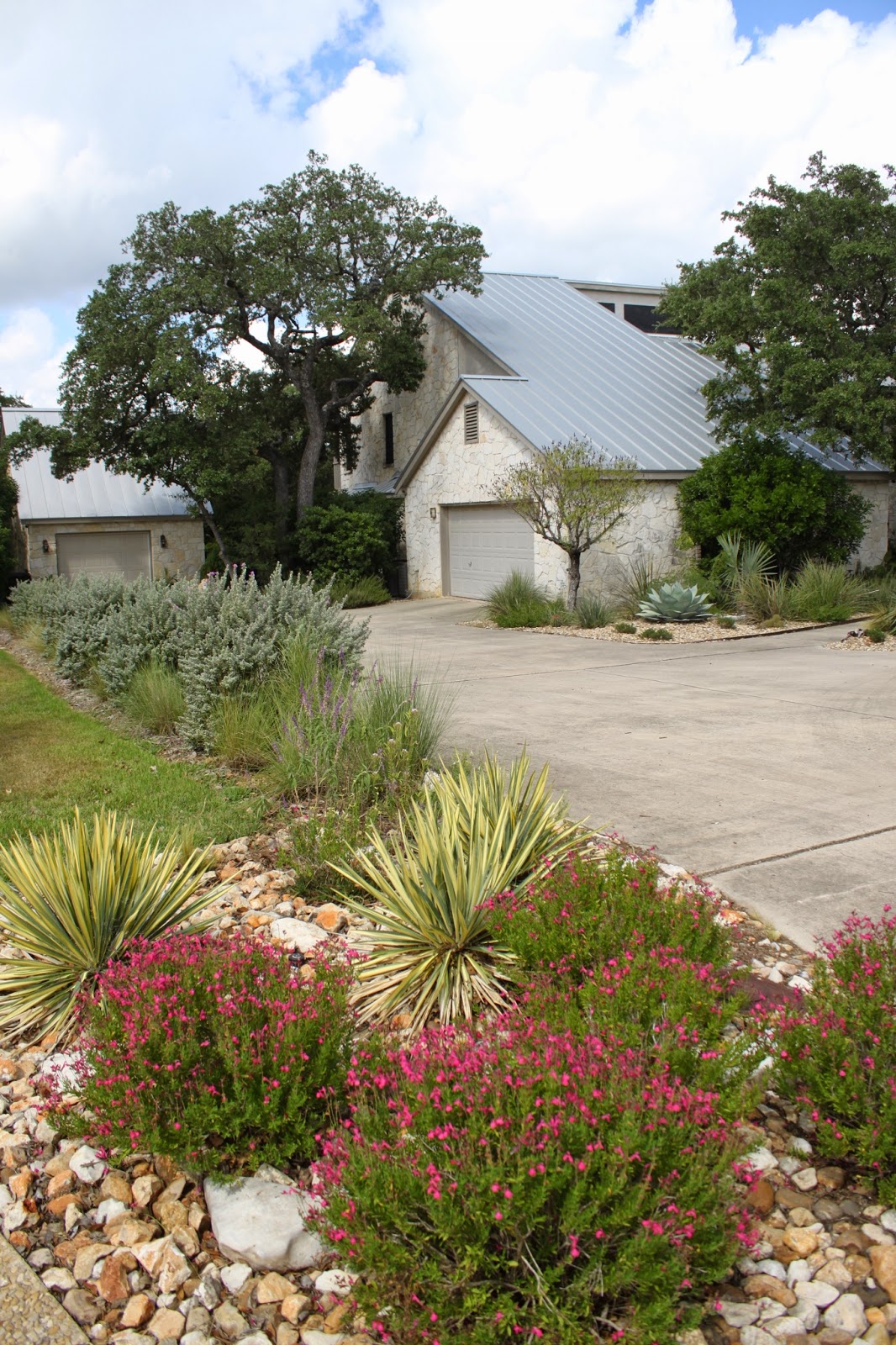 Along the north end of the drive the lantana (the green mound between the cactus and the yucca) and asters (farther back behind the yucca) are just beginning to bloom and will look great in about two weeks. 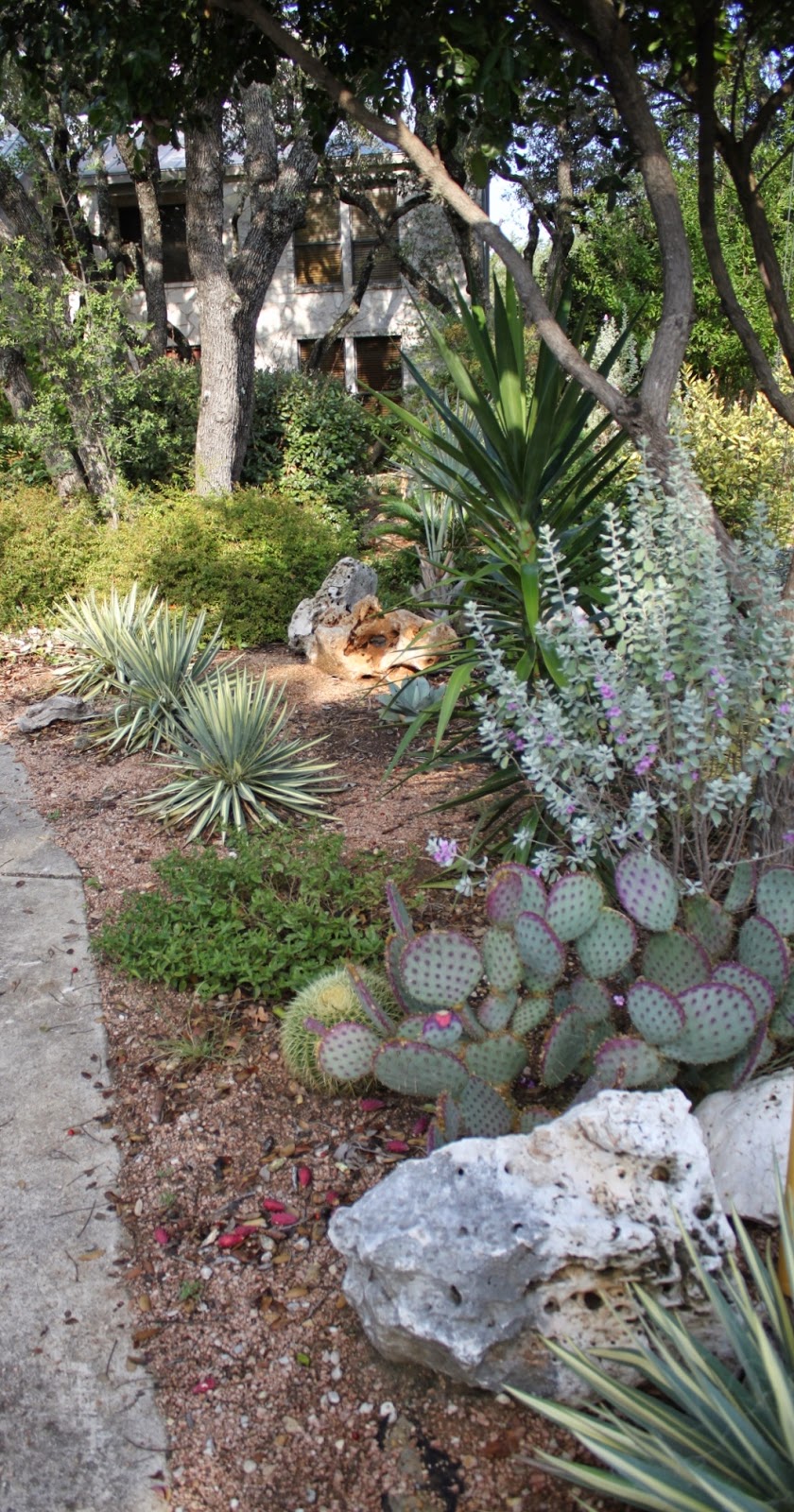 The Agave ovatifolia works its magic even as the orange Pride of Barbados blooms to the left have faded and the yellow Mexican Bird of Paradise (Caesalpinia gilliesii) blooms take their place.  Those green dots at the foot of the agave are Damianita which should be in bloom summer through fall--except they are currently out of blooms. 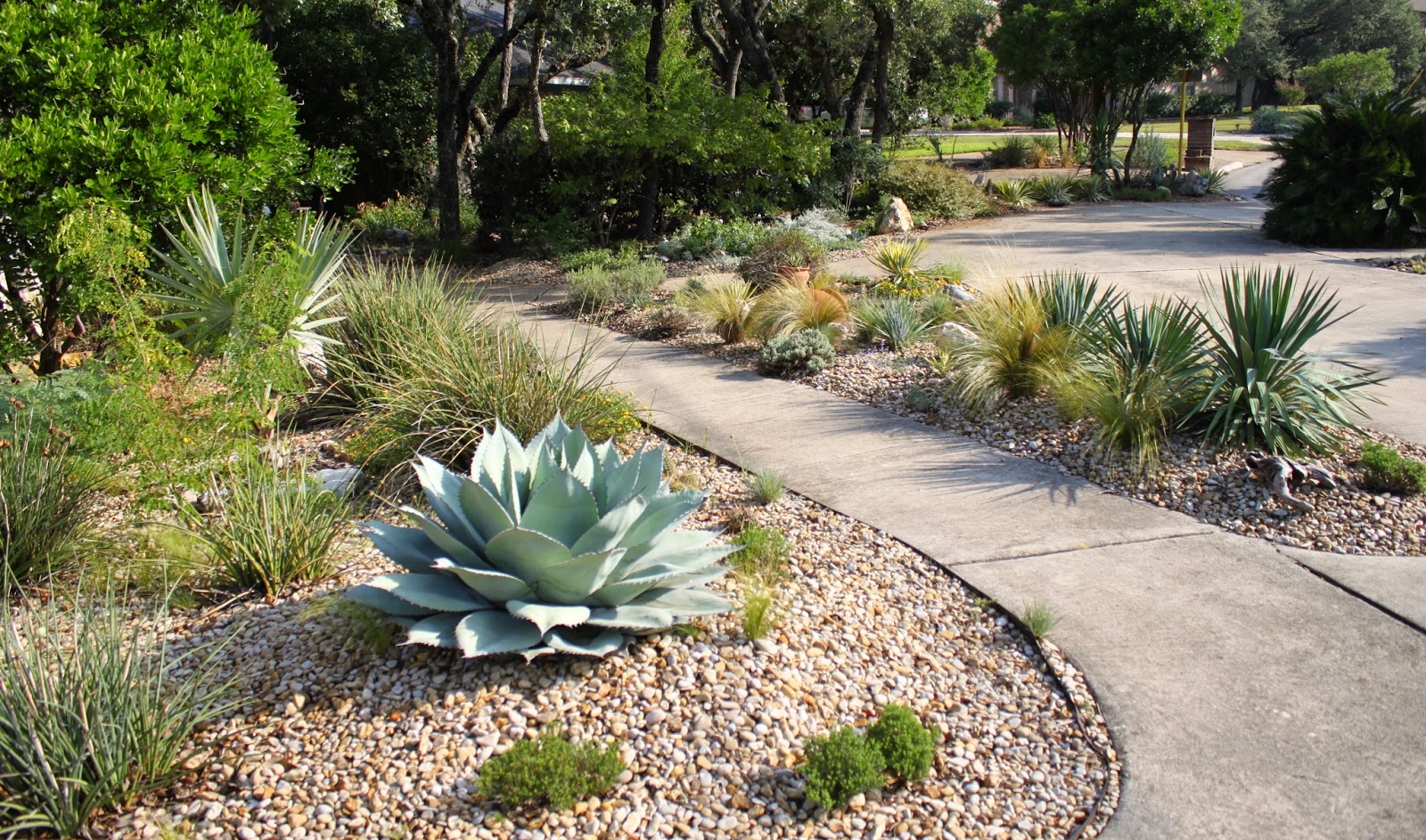 Inexplicably the Yaupon in the driveway island, which has been there 15 years, suddenly began to die out.  After a few weeks with a little extra water it has started to grow new foliage.  I'm not about to remove an established plant at the last minute simply because the entire city has been invited to see my garden.  What would I do if the tour were this week?  Stick an agave pot in front of it! White Plumbago and silvery artemesia always come through this time of year.  This area has been through several iterations and I like this one the best. 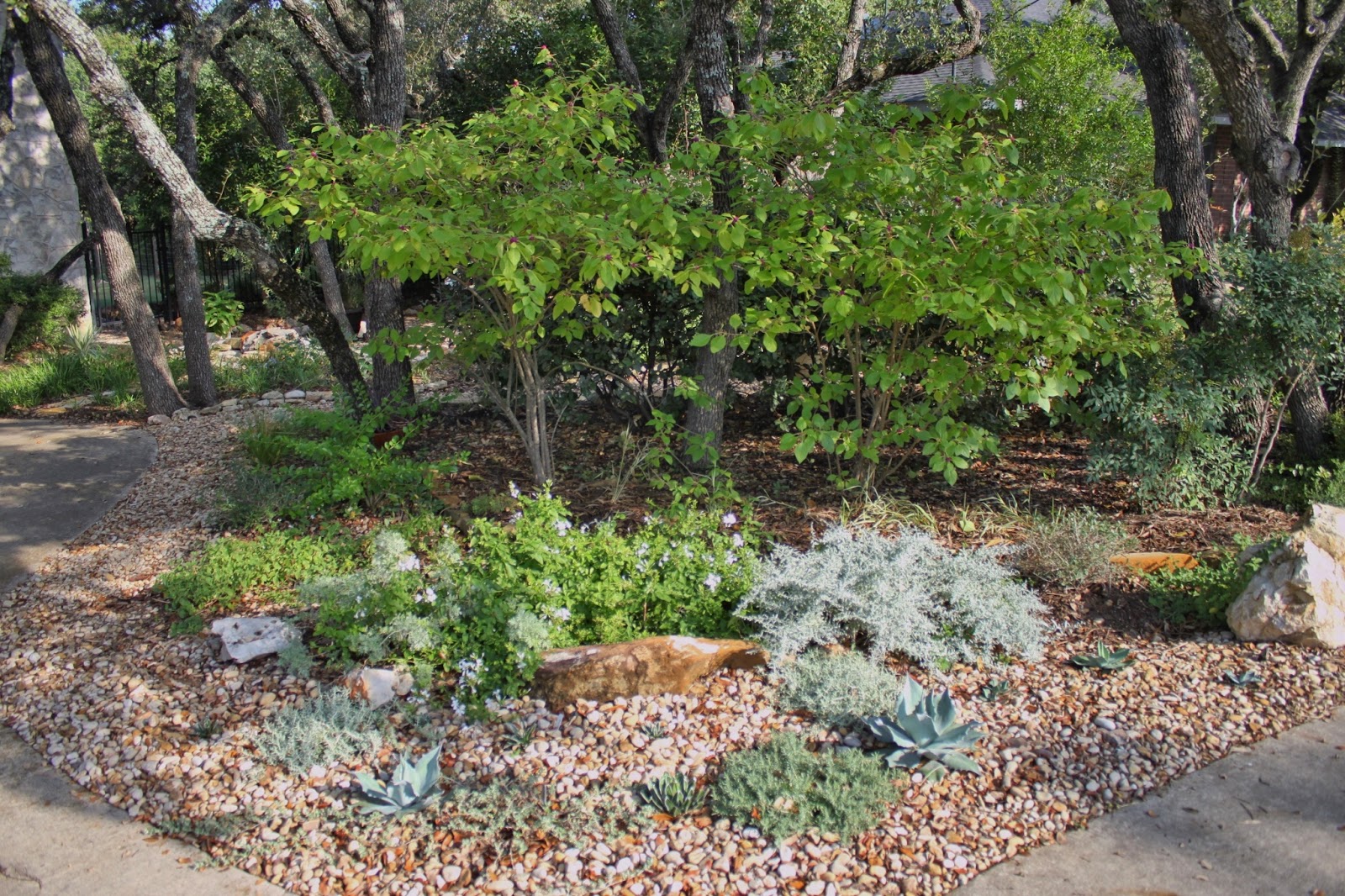 At least this is one part of the garden that looks even better in person. 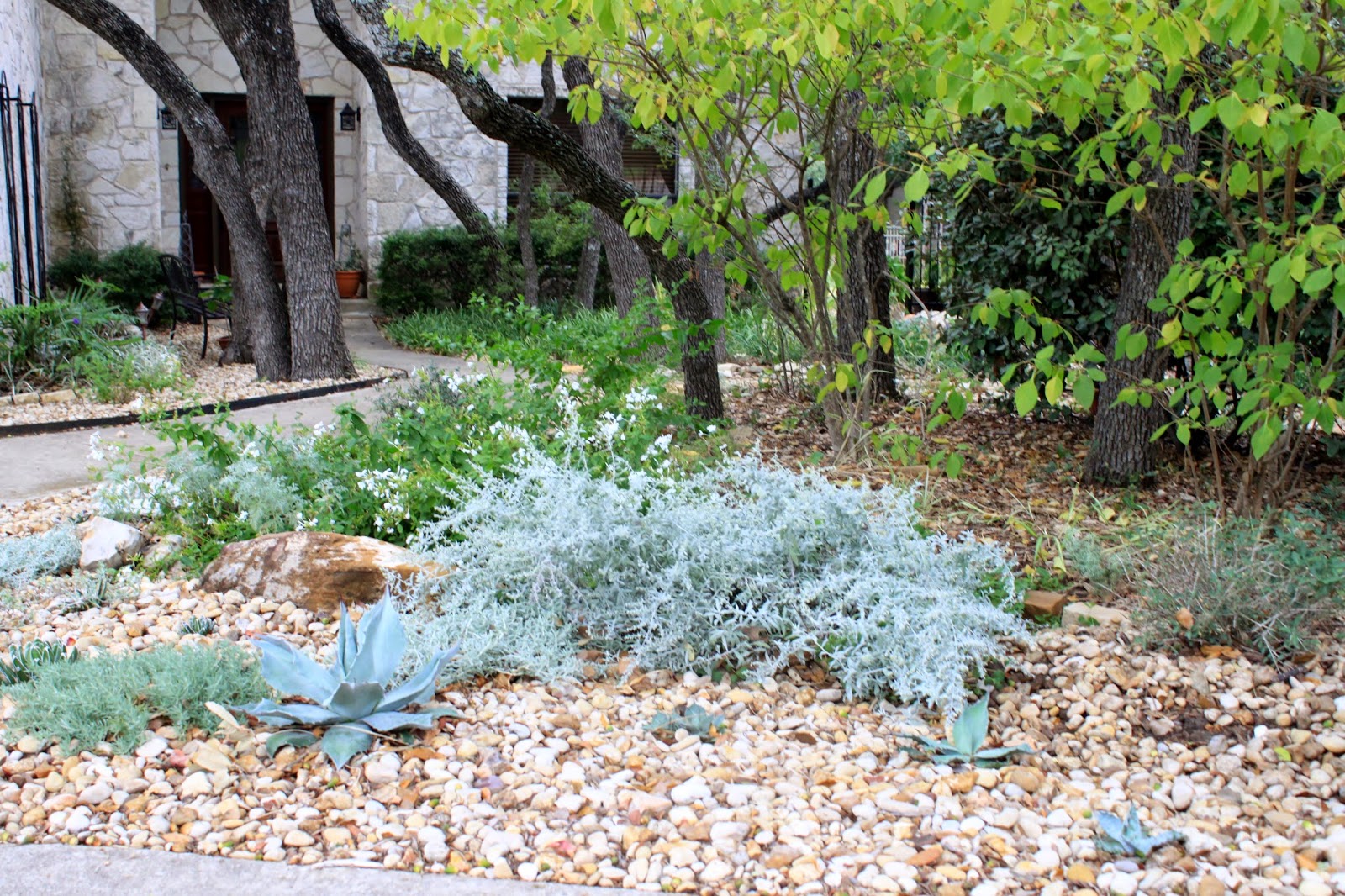 Maybe those vines I planted in front of the new trellis' will make a showing by next year.  I'm experimenting with Asiatic Jasmine 'Salsa' there after learning that it looks great when grown vertically.  How patient are the (non-)gardening public?  Would I be making a last-minute trip to the nursery for more mature and expensive vines? 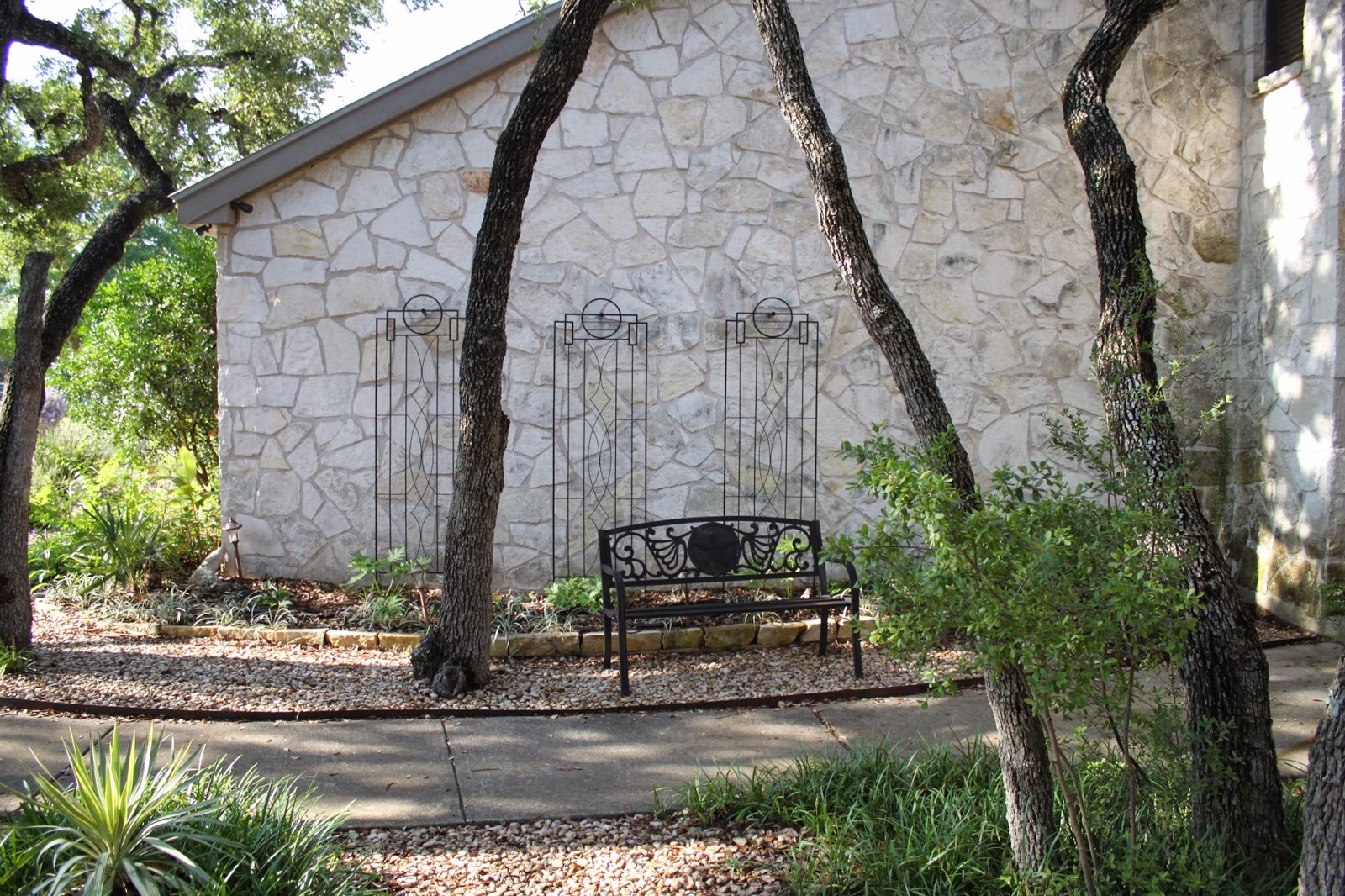 The shade garden is mostly foliage so it stays the same much of the year.  It's one place that may look better this time next year.  We recently reworked this area and a year of growing in should be good for it. 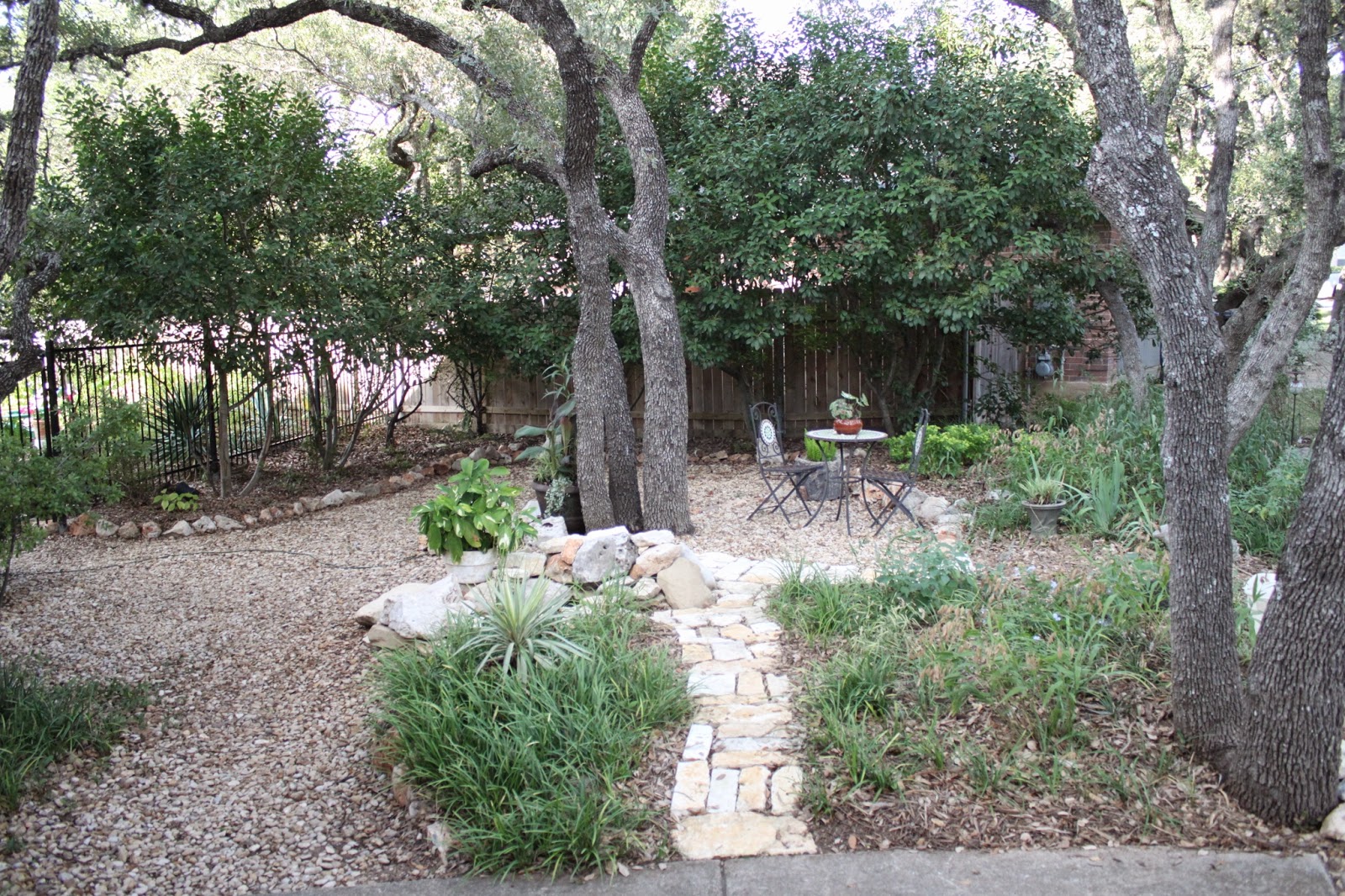 The yummy Fragrant Mistflower to the left behind the face planter can't be so fragrant if it's not blooming.  Two weeks from now will be so much better. 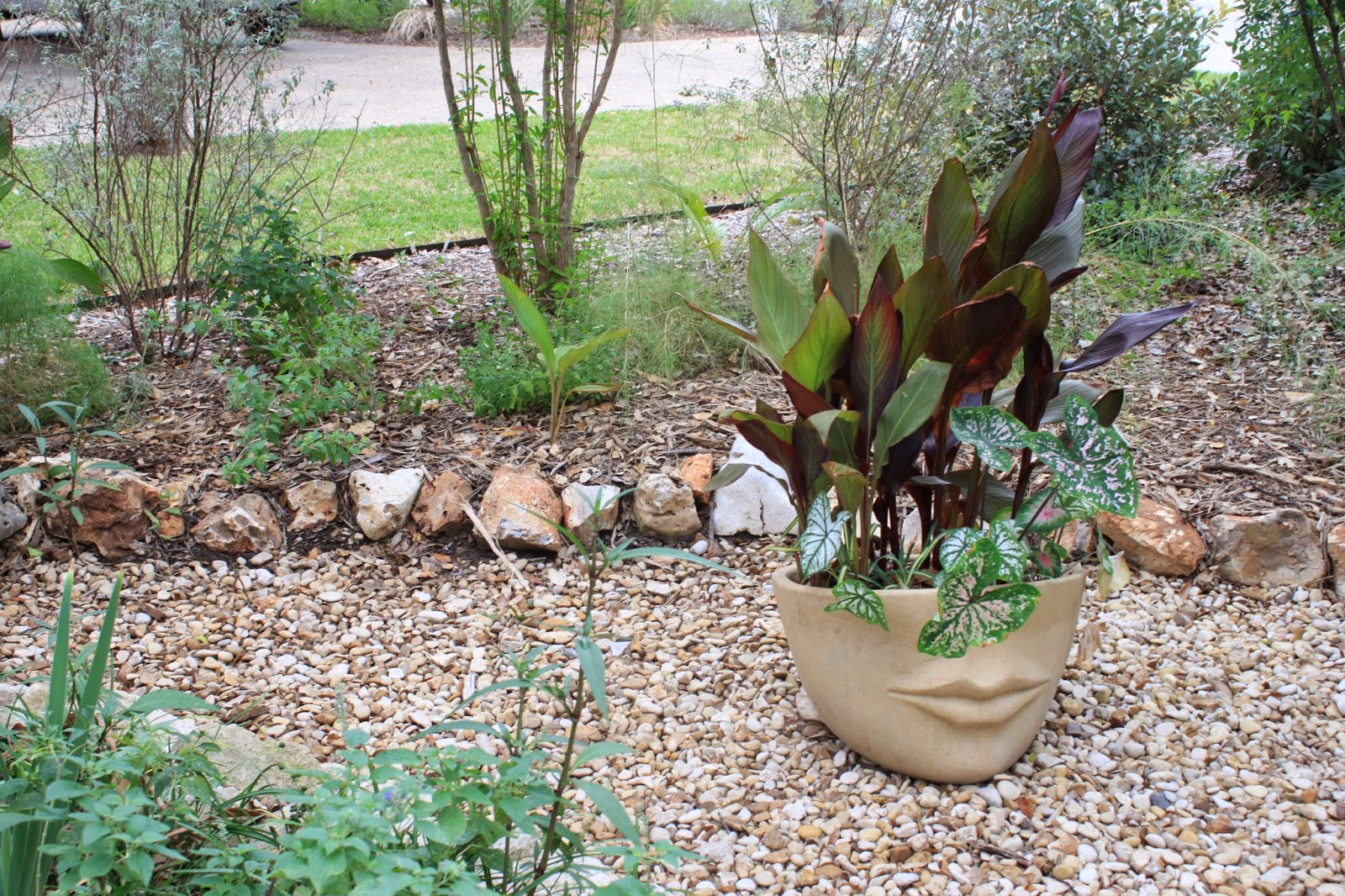 Through the back gate the bright yellow Salvia madrensis blooms are not yet arching over the gravel path.  The buds have just begun to emerge.  Our Buffalo Grass lawn was kept green this year with occasional watering and we can do that again next summer. Green?  Yes, this is green given it is native grass in an arid climate. 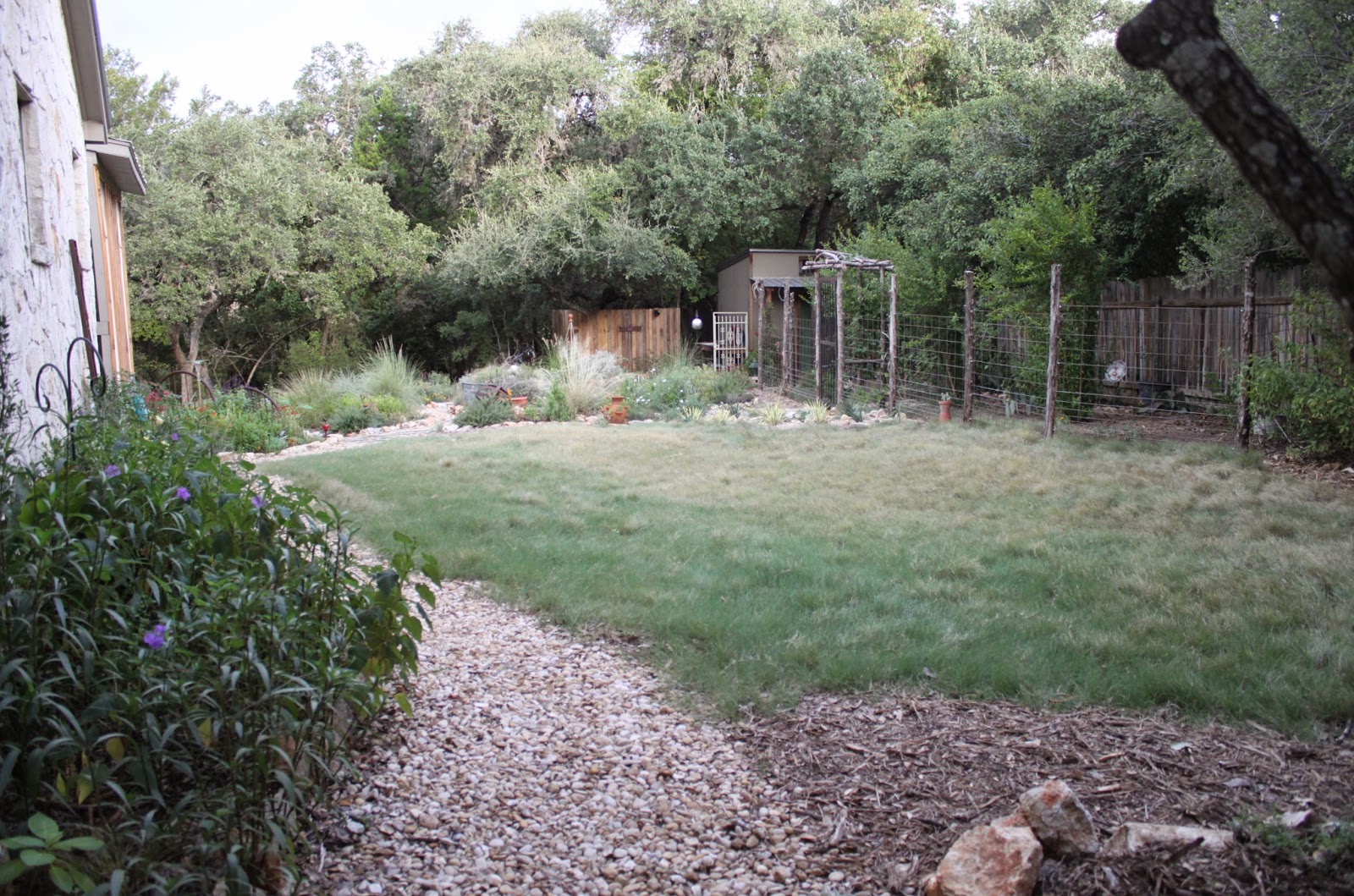 I don't often show this area to the side of the gate which we are mostly populating with extra plants dug up elsewhere in the garden.  We need to do something about the utility service boxes by next year but it is a tight fit there.  The log pile on the right is protecting a young Agave americana mediopicta 'alba' from deer antlers. 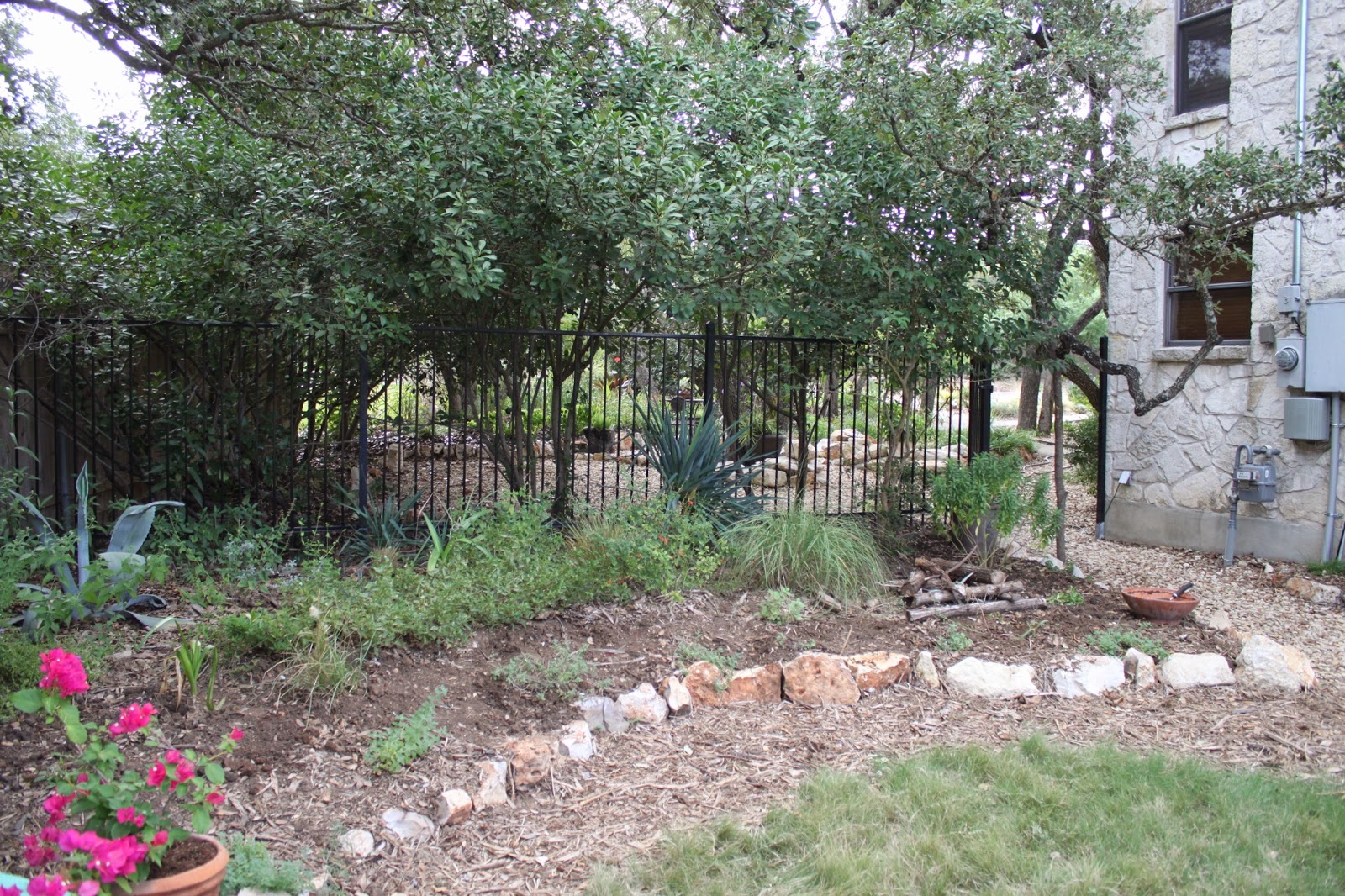 The new crevice garden looks good since cacti and succulents are evergreen in this challenging spot. 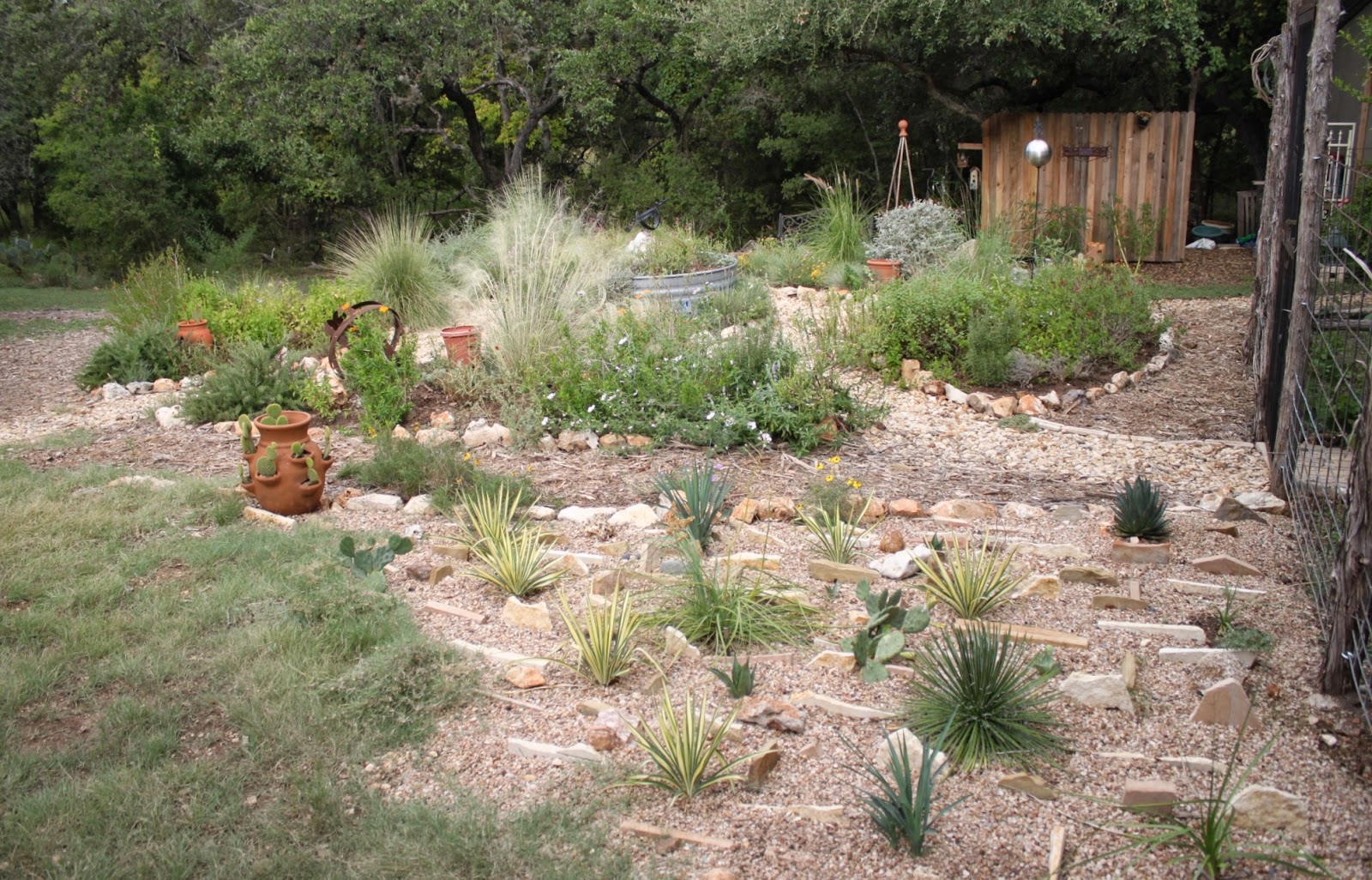 Fall blooms in the tank garden are just beginning to appear. 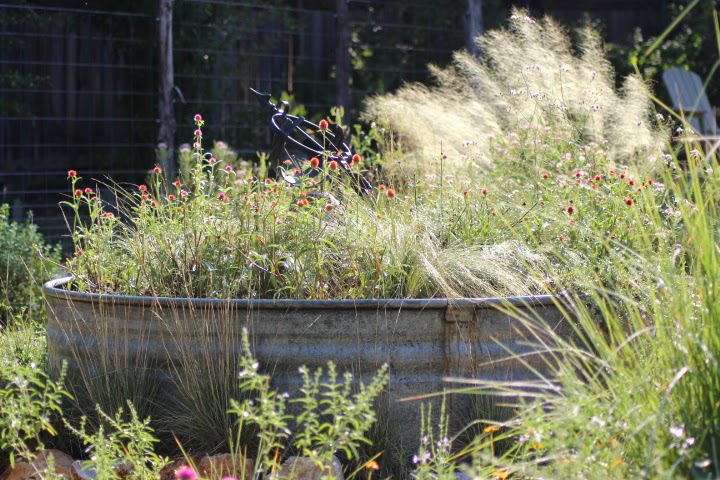 Beautiful native purple Liatris shared by Michael at Plano Prairie Garden is at peak bloom so that's a plus.  It's beginning to establish and should look even better next year. 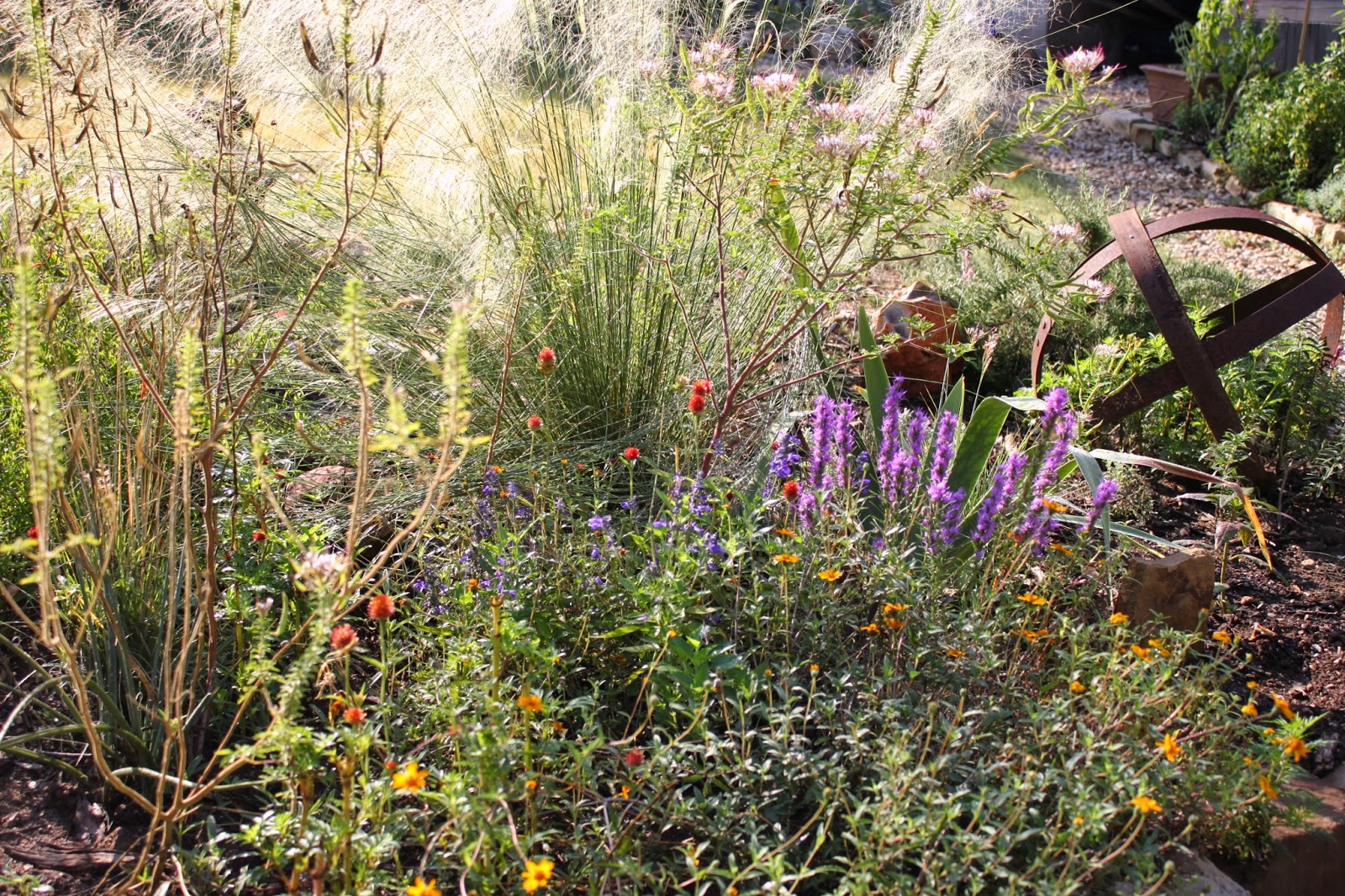 The eye-catching white plumes of Muhlenbergia capillaris 'White Cloud' are due to a recent purchase of the plant in bloom from the nursery.  Will it be in bloom early next October?  Probably not.  Most ornamental grasses in my garden reach full bloom late October to early November. 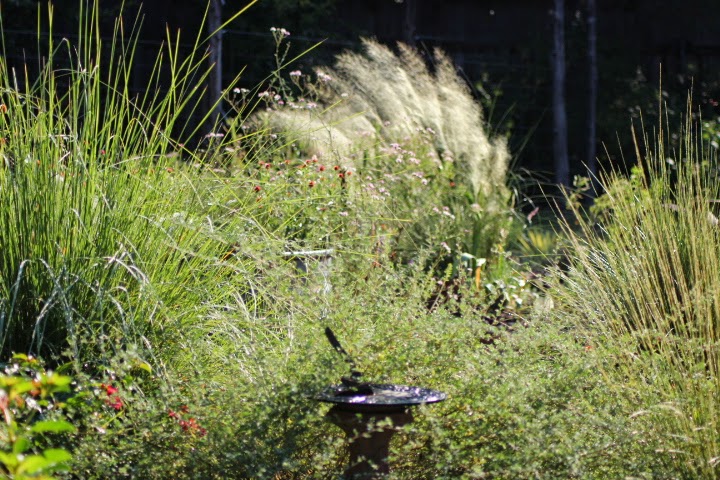 These native yellow Helenium araum or Sneezeweed wildfowers are a bright spot in the otherwise sleepy circle garden. 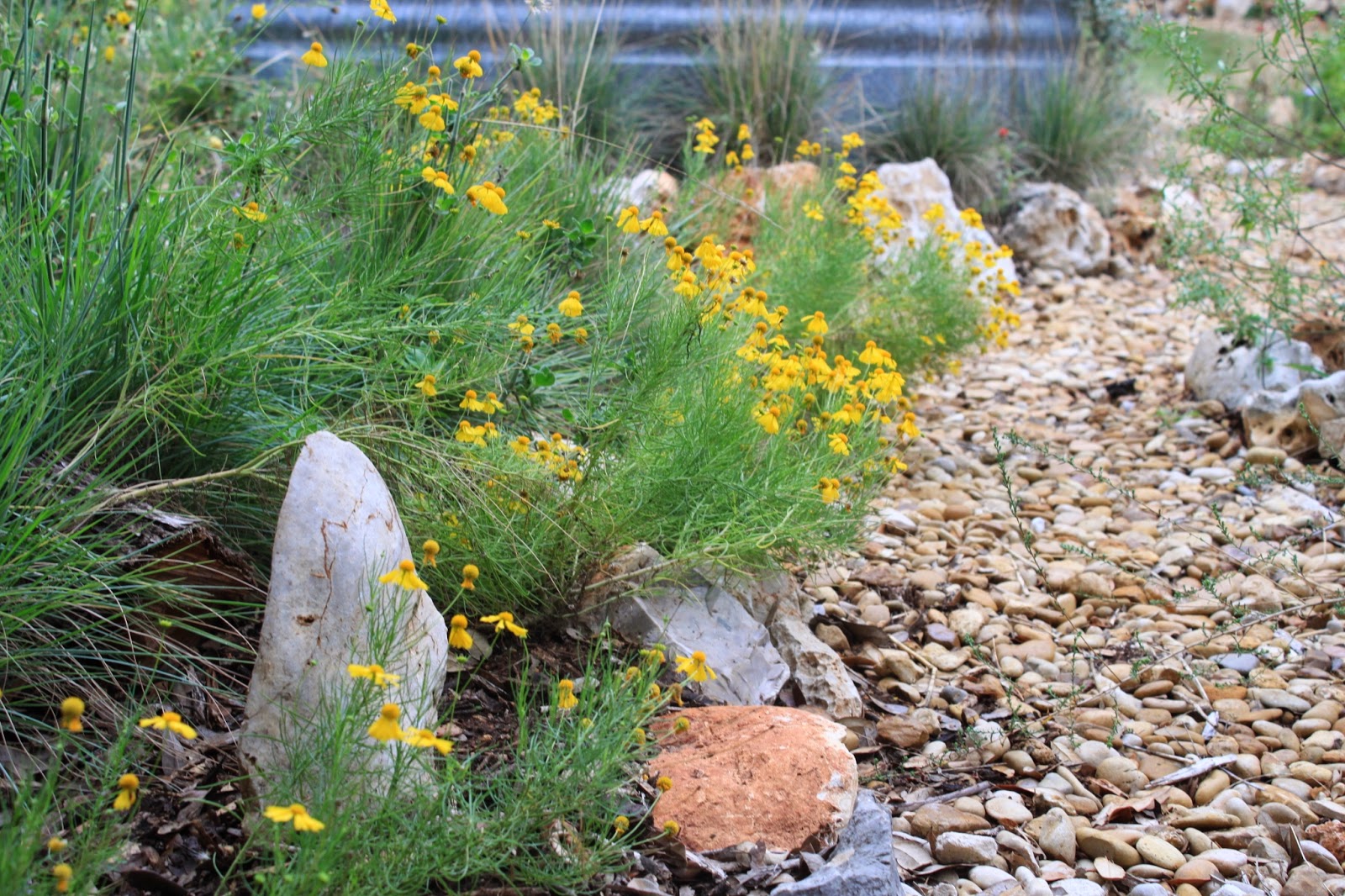 A big patch of Gregg's Mistflower died out during August and much of it had to be removed. 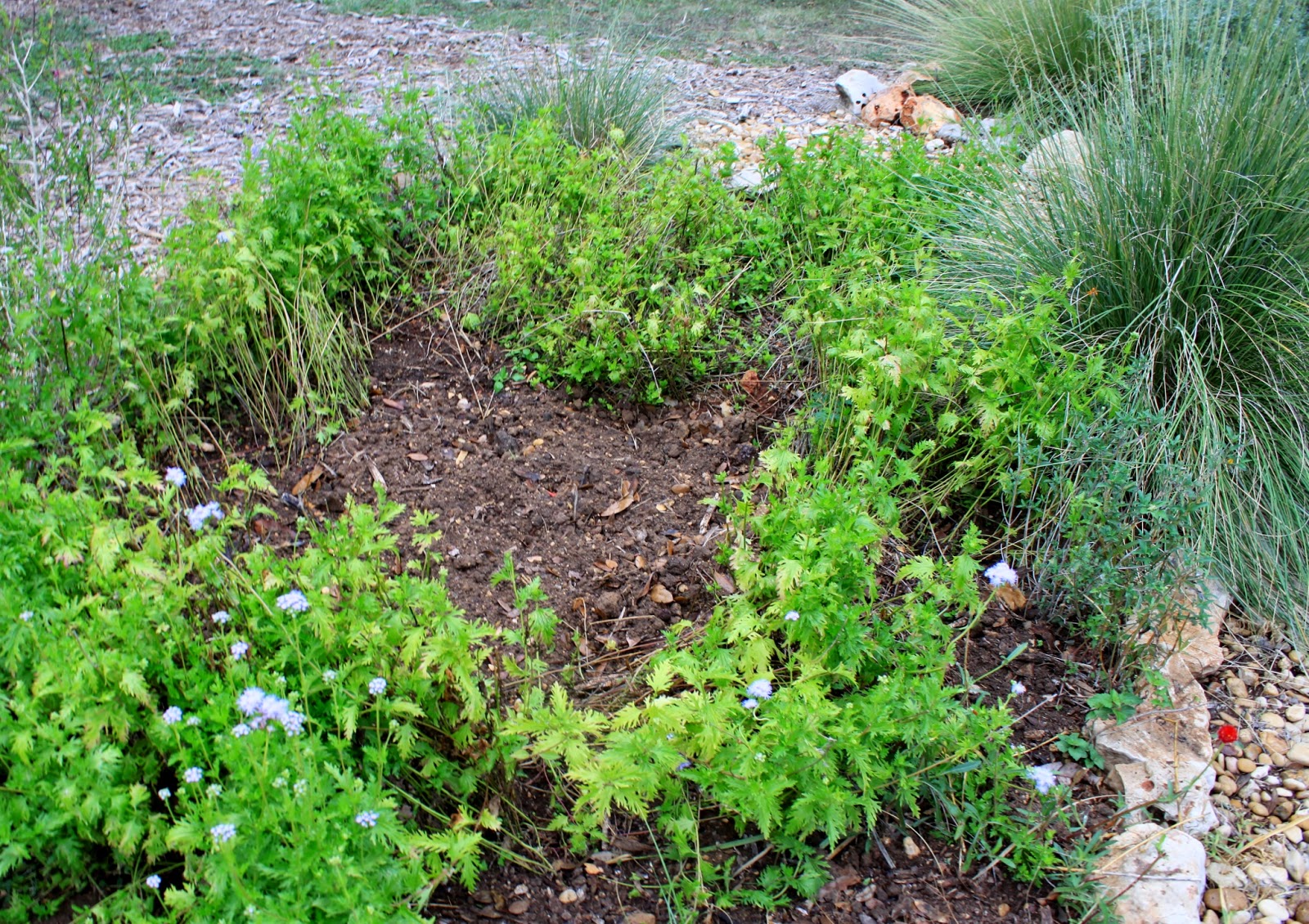 The current solution is to "plant" a potted bougainvillea there until they grow back.  This is what gardening friends visiting later this week will see.  Would I feel compelled to purchase and plant something new here if a city-wide garden tour were on the horizon? 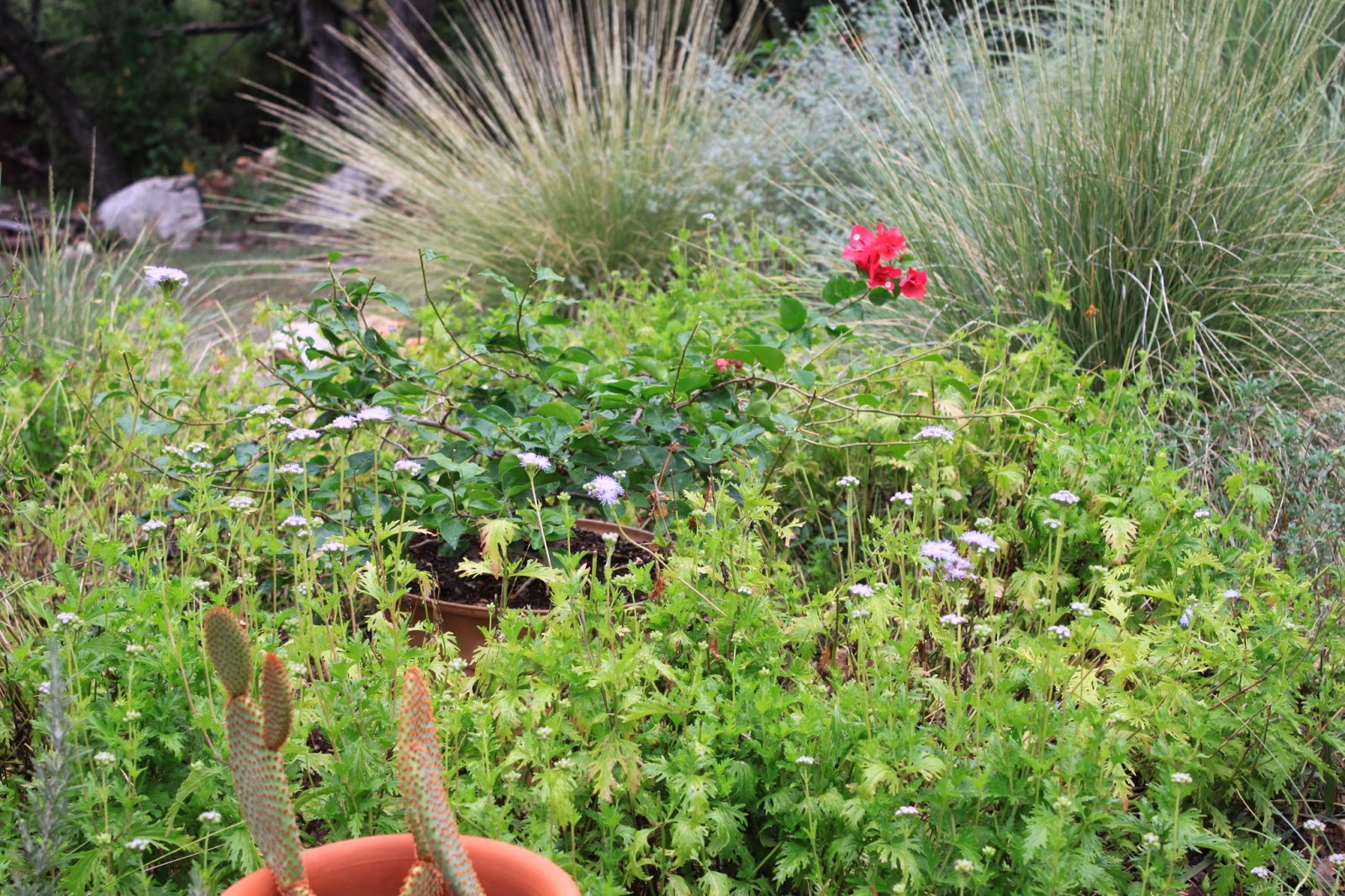 Avert your eyes if  you dislike "cute" in the garden!  The best blooms are in the flower "bed" with Salvia Amistad as the anchor.  We had a cold winter which set back the Brugmansia, Sweet Almond Verbena, and the Clerodendrum ugandense so another brightly blooming bougie takes up the slack. 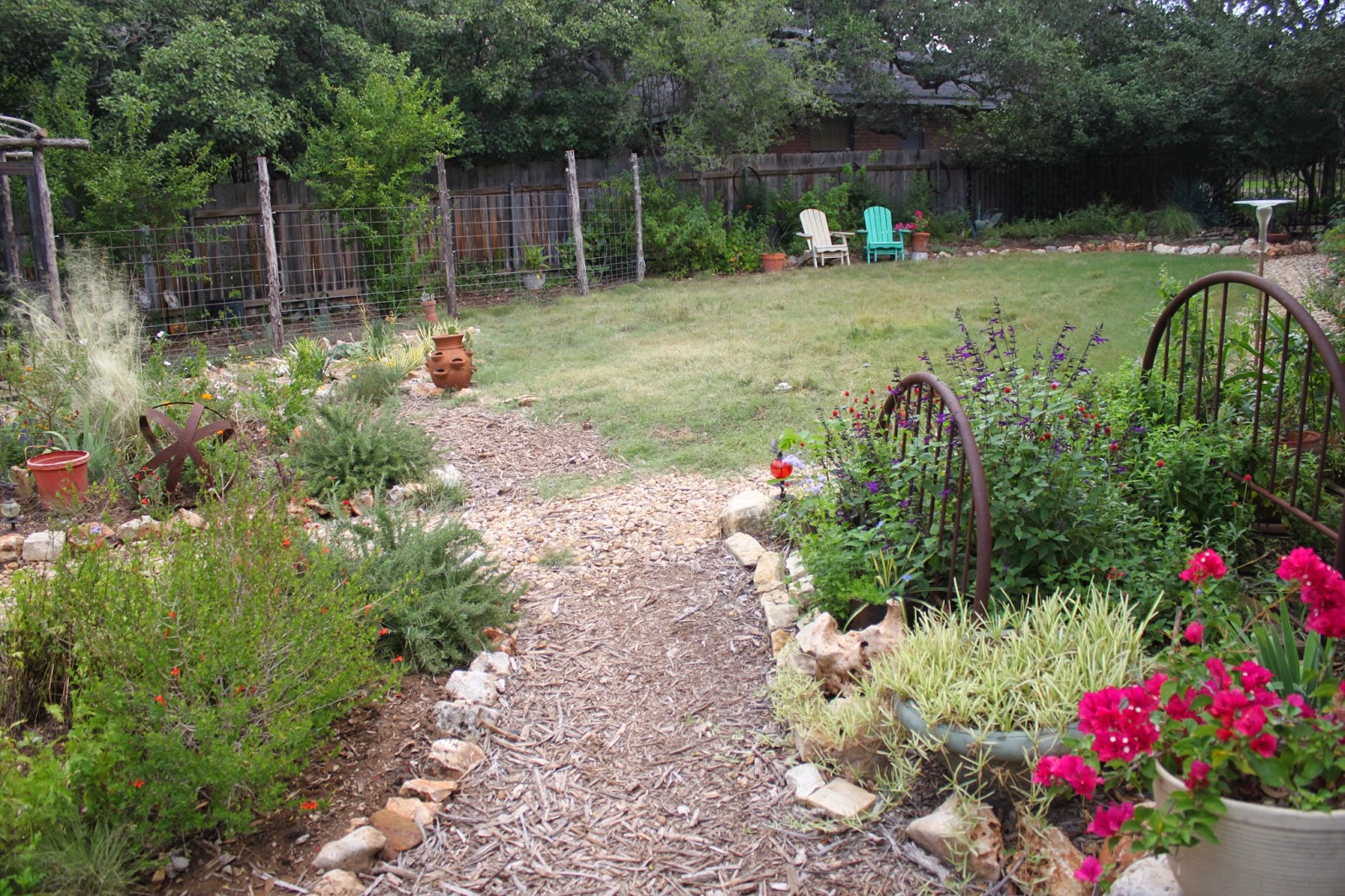 This natural area is practically maintenance free since the native horseherb groundcover planted and maintains itself.  Some people like it, others don't.  It's better than lawn here and helps keep weeds down.  Last year we began adding native plants along the property line in front of the Prickly Pear cactus.  The area to the right will be addressed this winter after we make repairs to the deck. 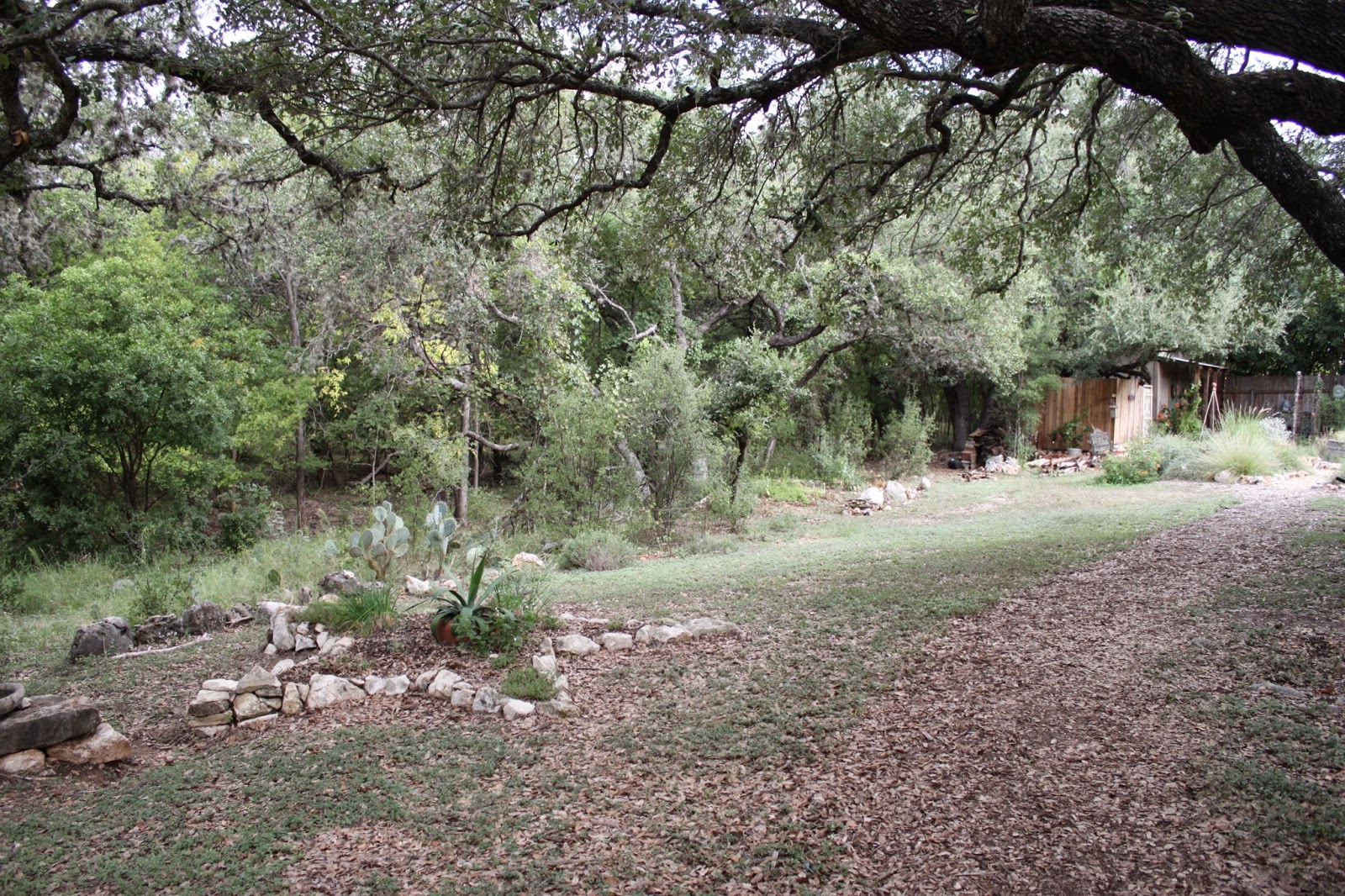 Behind the garage is still pretty natural.  The silvery plant is Estafiate, a native artemesia. 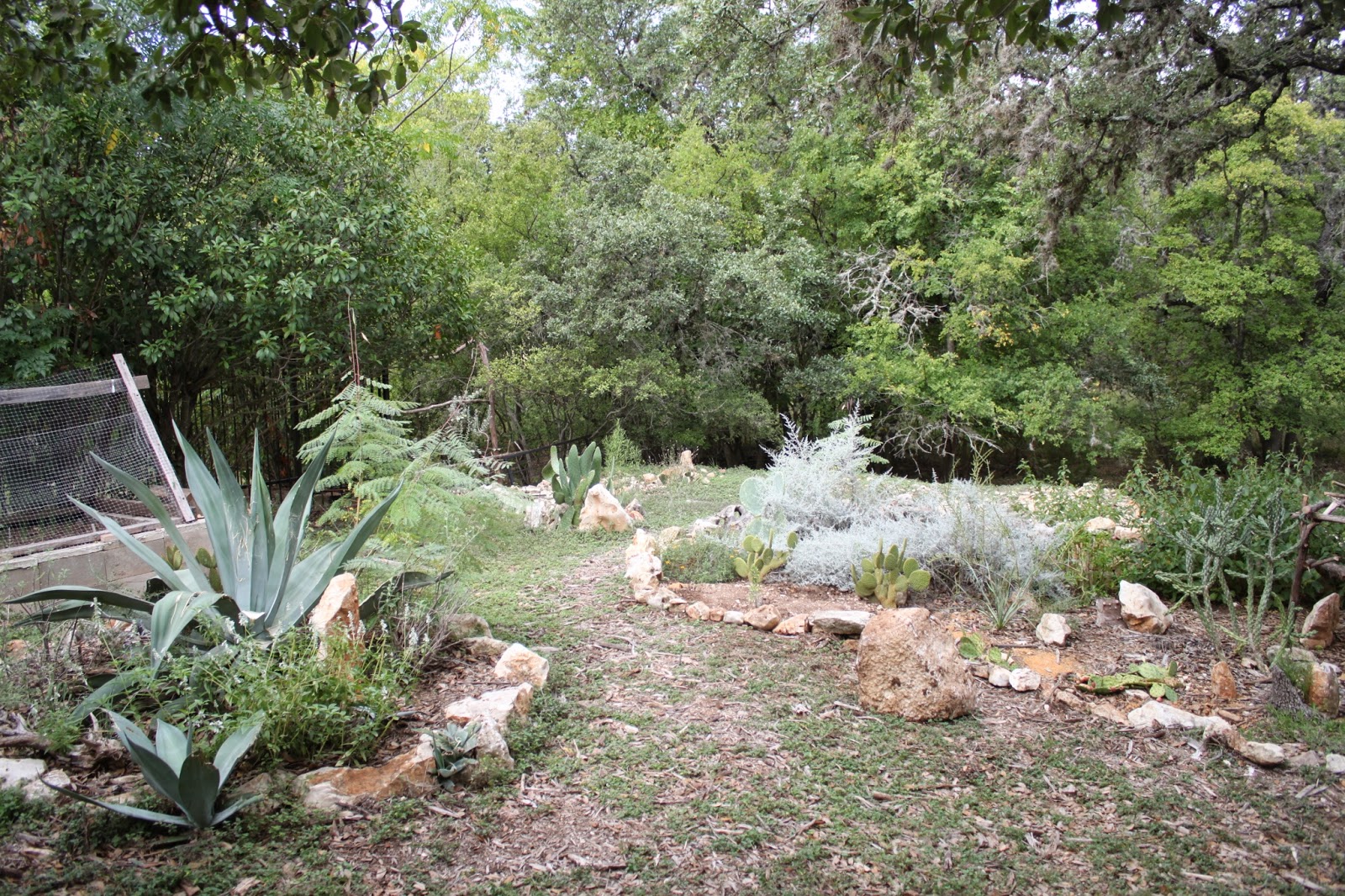 Along the stone path beside the garage the summer blooms have faded and the fall bloomers like Salvia madrensis (front left) are not quite out yet.  There's always that view of the bending oaks. Overall the tour timing does not allow for adequate summer recovery.  Gardens in San Antonio need a couple more weeks to truly be worthy of a tour.  As with any gardener, I want my garden to look great for a tour, not just OK given the summer heat.  I do know that I can force my garden to look better by watering it like crazy in August and September--but doesn't that defeat the idea of a "watersaver landscape"?  So my quandry remains "to tour or not to tour" next year.  The timing remains an issue.

If we do agree to the tour it's going to have to be about garden structure and planning for all seasons--including those times when very little is happening!
Posted by Shirley Fox at 3:13 PM