A photo of Teucrium canadense in my Garden Blogger's Bloom Day post last week generated some comments about the plant so I'm featuring Canada or American Germander for Wildflower Wednesday.  The fourth Wednesday of each month Gail at Clay and Limestone invites garden bloggers to join her with a post on flowering native plants in our gardens. 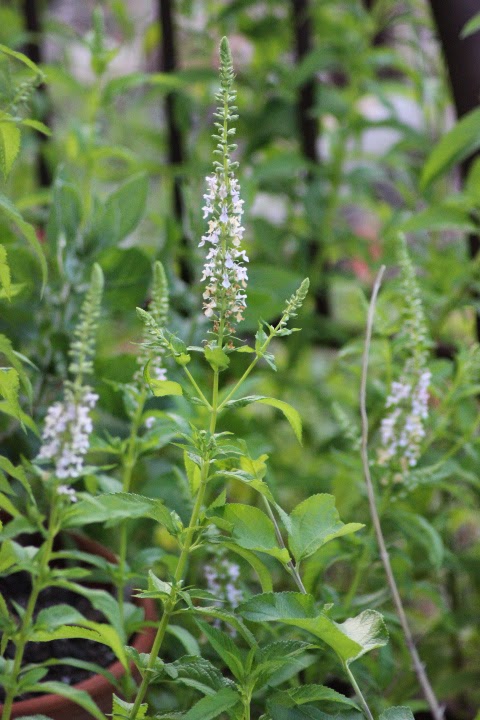 It turns out that germanders are identified by their flower which does not have an upper calyx.  The missing upper calyx gives the flower a slightly flat, almost incomplete, appearance compared to its cousin the salvia which is also a member of the mint family. 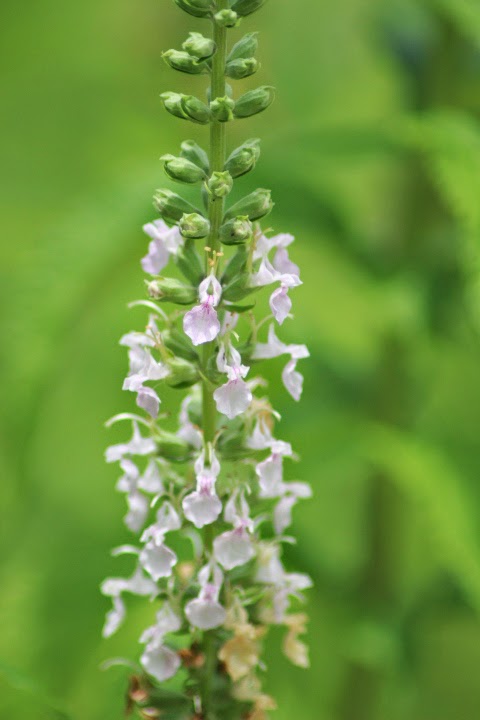 Because germanders are distinguished by flower shape their foliage can be quite diverse including the green, almost needle-like foliage of creeping germander, the glossy green textured leaves of upright germander, and the flat fuzzy gray leaves of silver bush germander.

Along with the typical research information I was also curious as to why it was called American germander when the latin name indicates it is Canadian in origin.  The closest I found was this explanation on the Friends of Eloise Butler Gardens website.

"The species, canadense, means 'of Canada'. As to the common names, American Germander is the older term and newer references, including USDA and the U of M Herbarium, prefer Canada Germander."

I'm fascinated by plants which can grow across a wide range of horticultural zones and Teucrium canadense has a huge native range covering much of North America.  It is commonly listed as hardy in USDA Zone 5 to Zone 10 but a look at the map shows it possibly can take a bit colder than Zone 5.  It's a perennial which grows as easily in Newfoundland and Saskatchewan as it does in South Texas.  This brings me to an important point about this plant--American Germander is a very aggressive grower as befits its membership in the mint family.  I planted a small sprig in Spring 2013 and one year later it has filled the bed to the point it needs to be pulled from pathways and away from other plants.  When it first popped up in large numbers this spring I was very surprised because it seemingly did most of its spreading by rhizomes during our exceptionally cold winter of 2013/2014.  Toward the lower right in the photo below you can see it popping out of the bed again after I pulled all the sprouts from the path a few weeks ago. 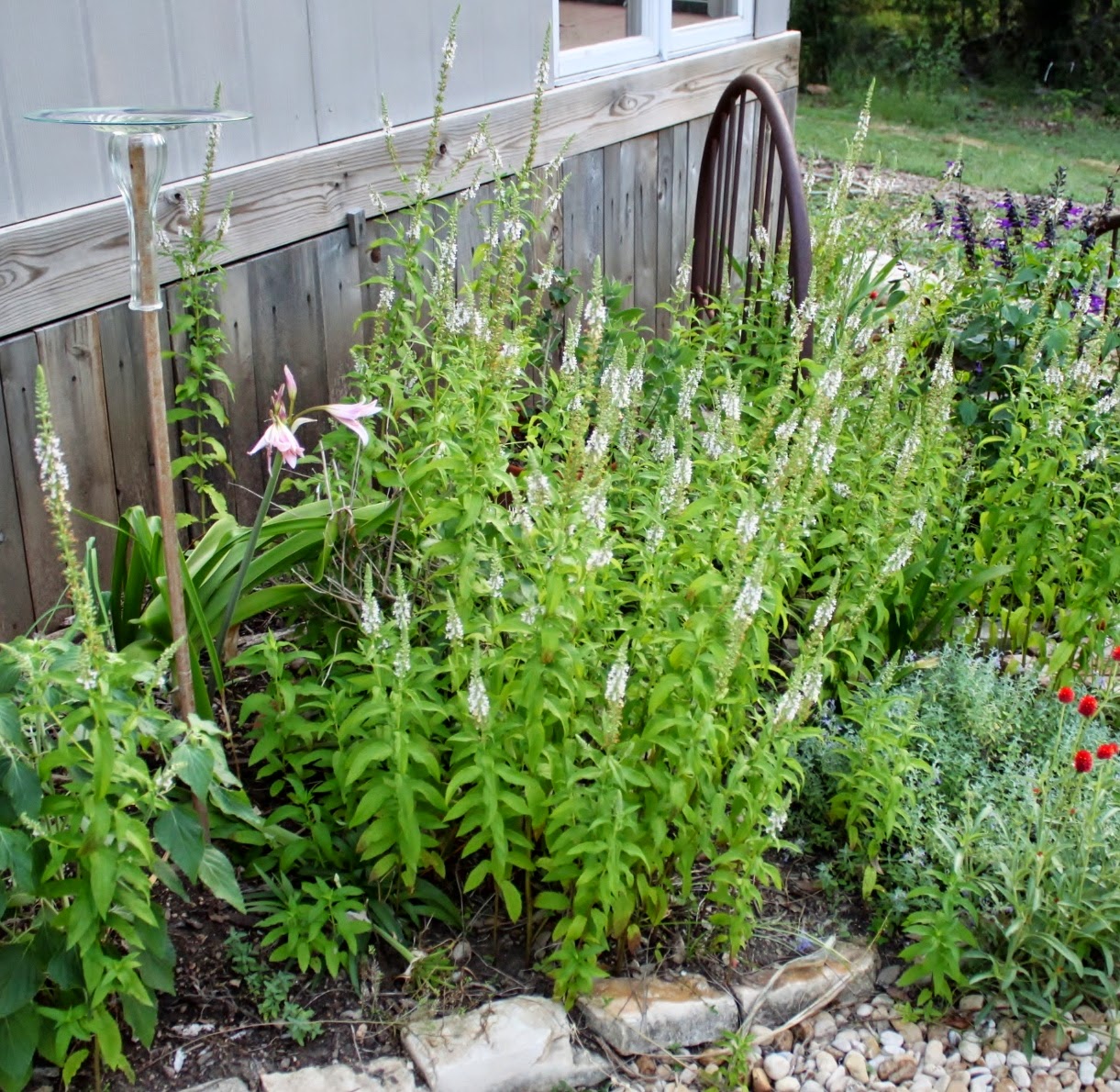 Bees and other pollinators love it. 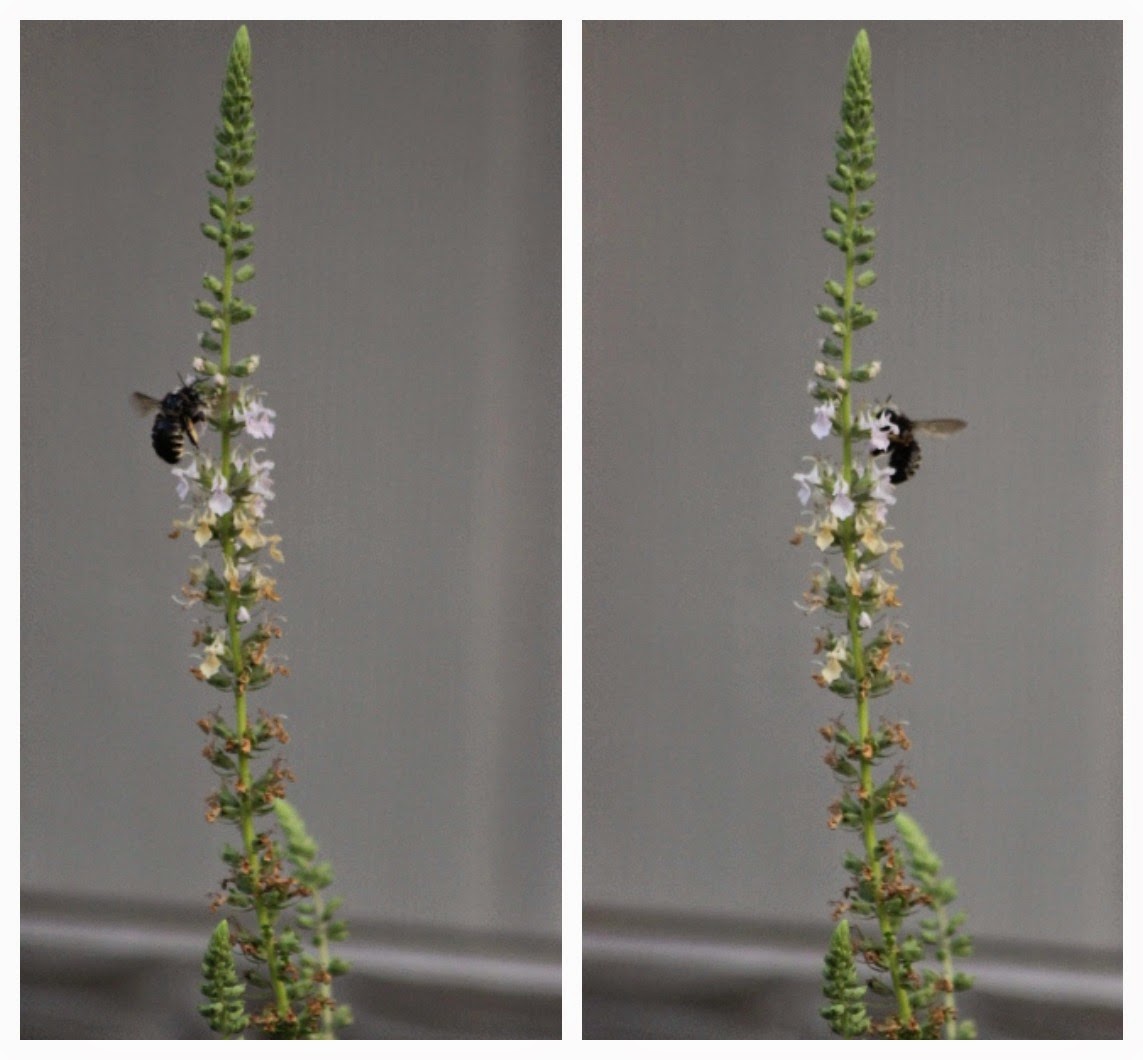 It is a an upright grower sporting blooms on four-foot stems from spring to fall in a wide range of soils from caliche to part clay.  References often mention that Teucrium canadense requires consistently moist soil but it is thriving in the midst of a drought in my hot, dry garden.  It is recommend for part shade and only gets morning and late afternoon sun in my garden.  It is completely deer resistant and not a single nibble has been noted despite its location along the main deer path through the garden. 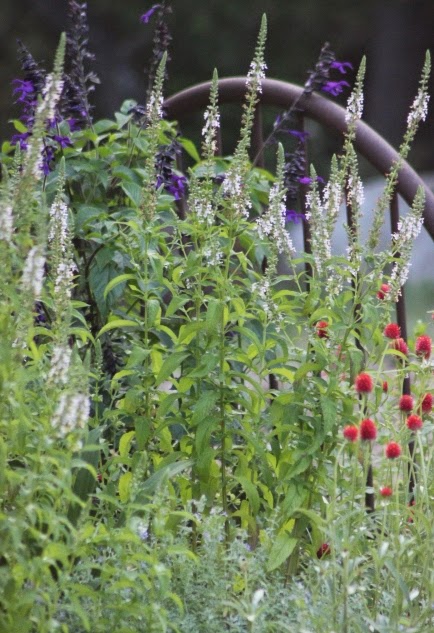 Teucrium canadense was interesting to research and I found it fun to find answers to a few of my questions about this relatively new plant in my garden.  For more information on wildflowers in the garden head on over to check out the comments section at Clay and Limestone.
Posted by Shirley Fox at 1:15 PM