June has been great for growing here in San Antonio, with cloudy days, relatively cool temperatures, and almost daily predictions of rain that ensure new plants and transplants have a fighting chance.  That's unusual for here, and has allowed continued planting and transplanting later than normal.  It's been good to have plenty of rain for a change after almost none all winter.  In this post I'm joining Helen at The Patient Gardener for the End of Month View of my garden for June 2014 to look at the progress.

Summer begins in the front garden with most of the blooms taking a rest while the silvery agaves and yuccas take center stage.  The Bismarck Palm which took a big hit this past winter is recovering and producing new fronds again. 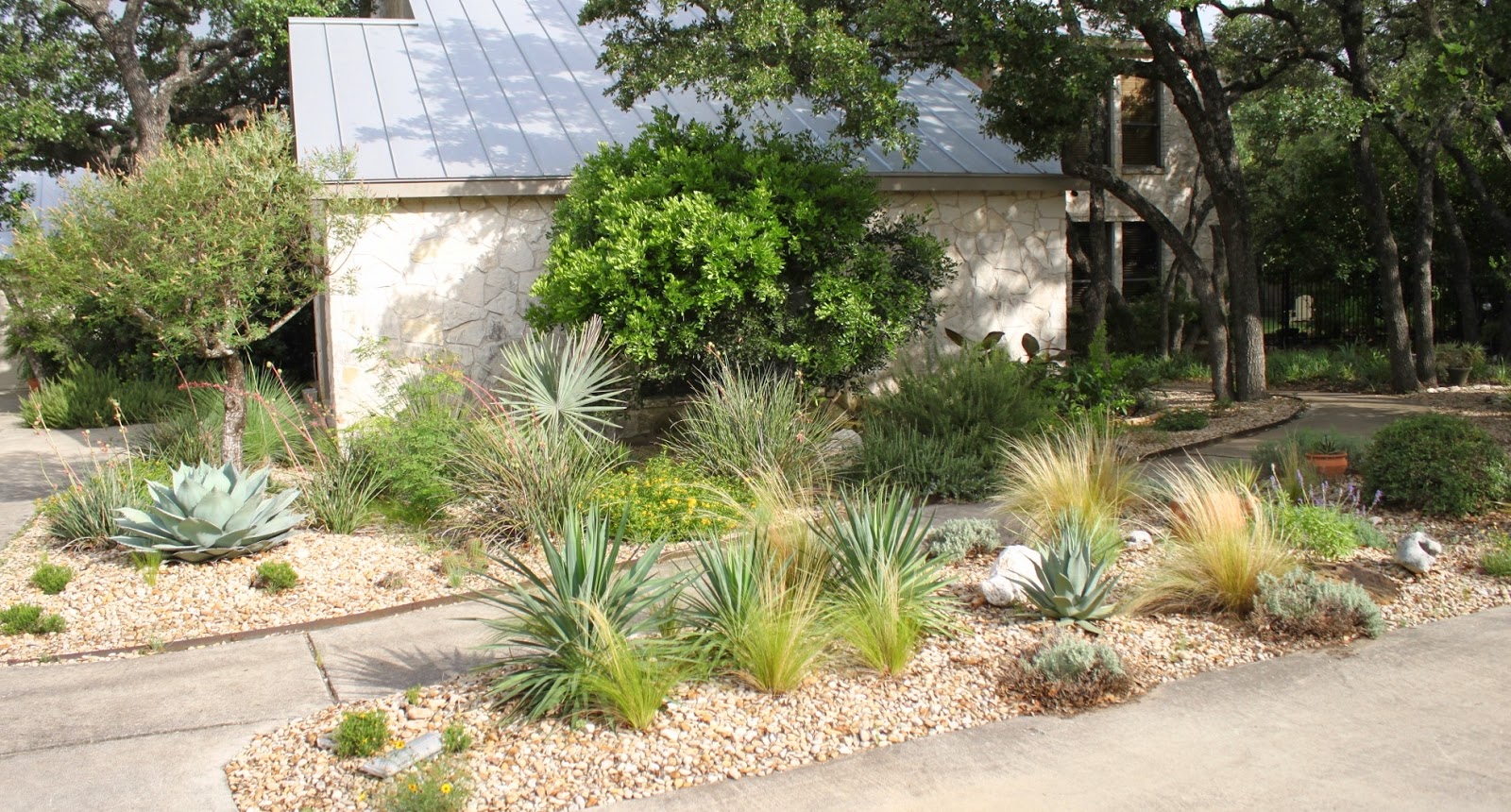 Silvery foliage is duplicated across the walk where small agaves, Estafiate or wormwood, and Artemesia Powis Castle fill in the gravel garden. 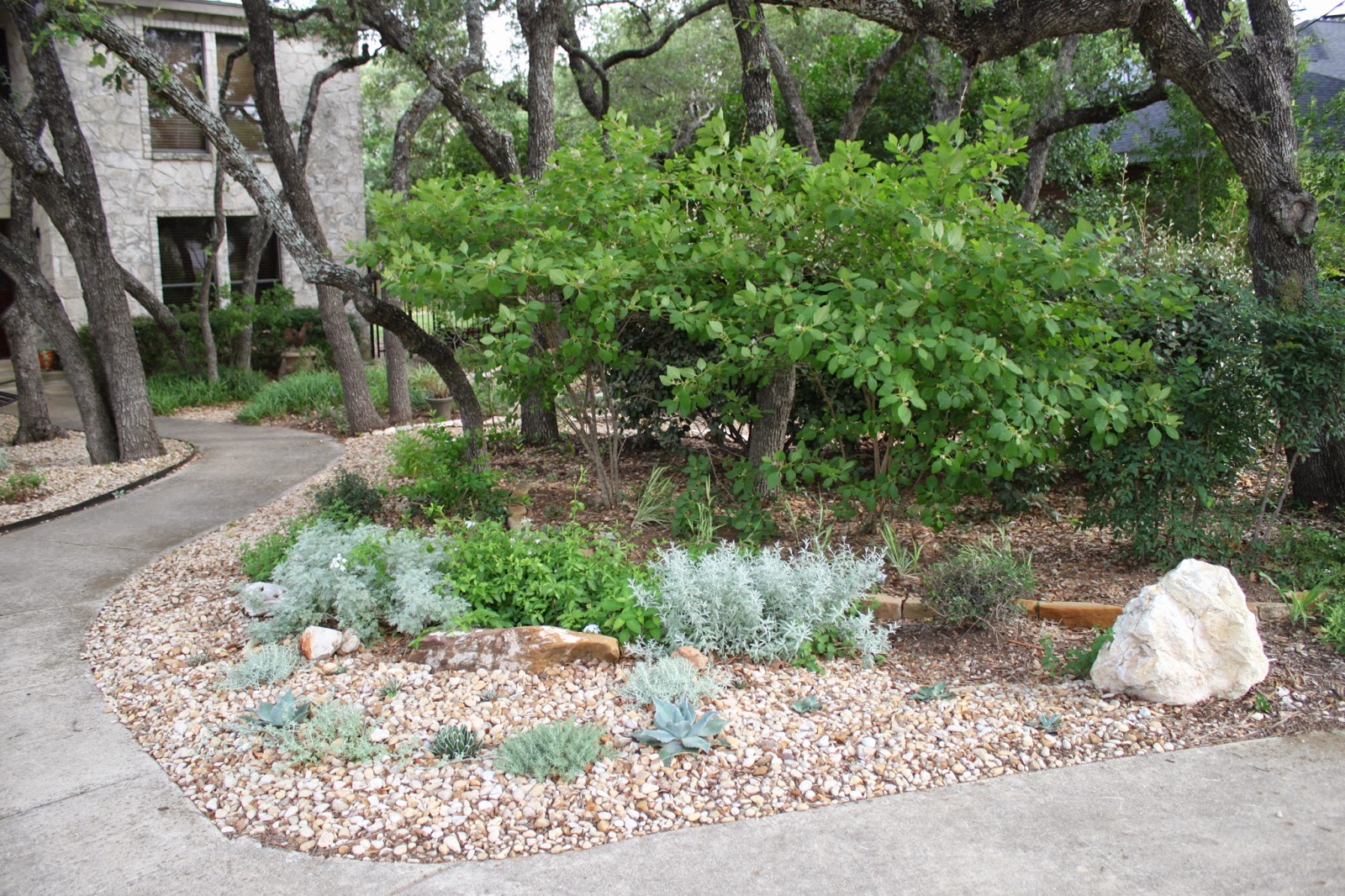 We'll head on down the front walk and see the biggest change in additional planting space.  Here is the view from today. 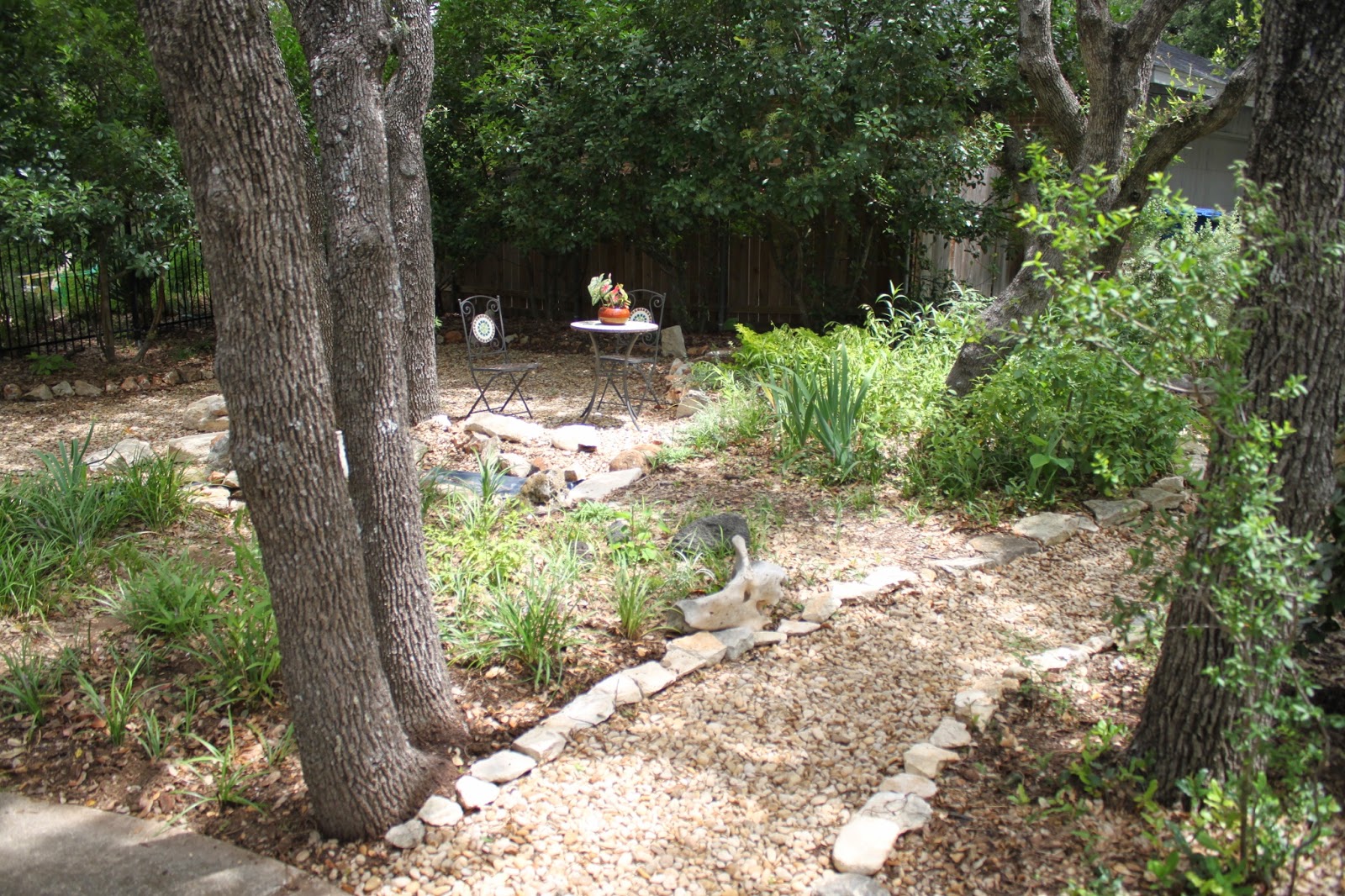 The sprouts from the oak trees were just too much to keep up with so now Inland Sea Oats and liriope duplicated from the far bed will give them cover.  Most garden designers recommend removing liriope if it is existing but I have found its drought tolerant and spreading ways important in the garden.  It's a spot of green that will cover a multitude of problem oak sprouts quickly and are free of cost because they were here when we purchased the house nearly 20 years ago.  The "Before" from March in case you were wondering is below.  Not good. 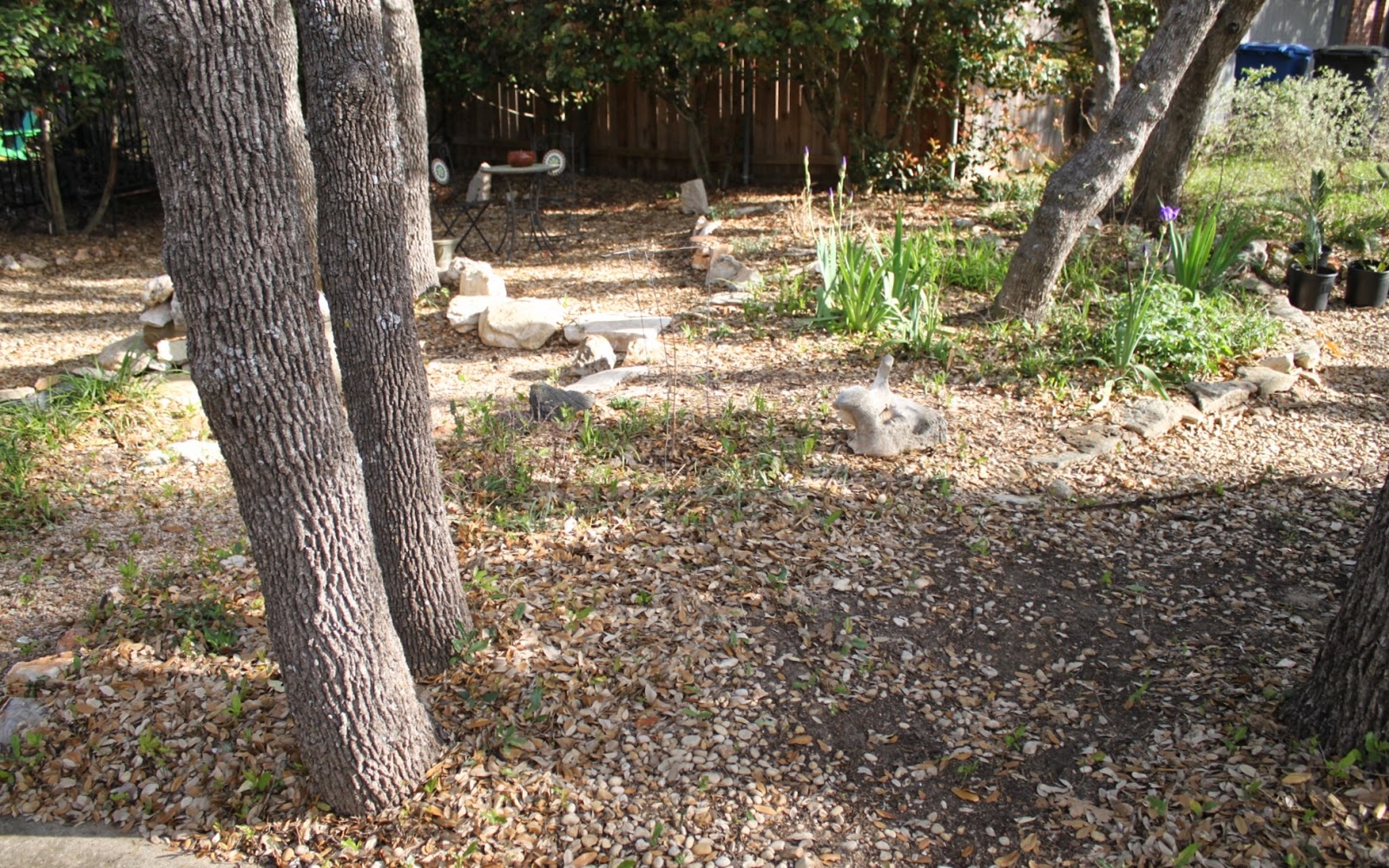 This view out from the front door shows the pea gravel has been removed from the path between the two beds.  This time of year we get to enjoy the neighbor's bright Crape Myrtle blooms. 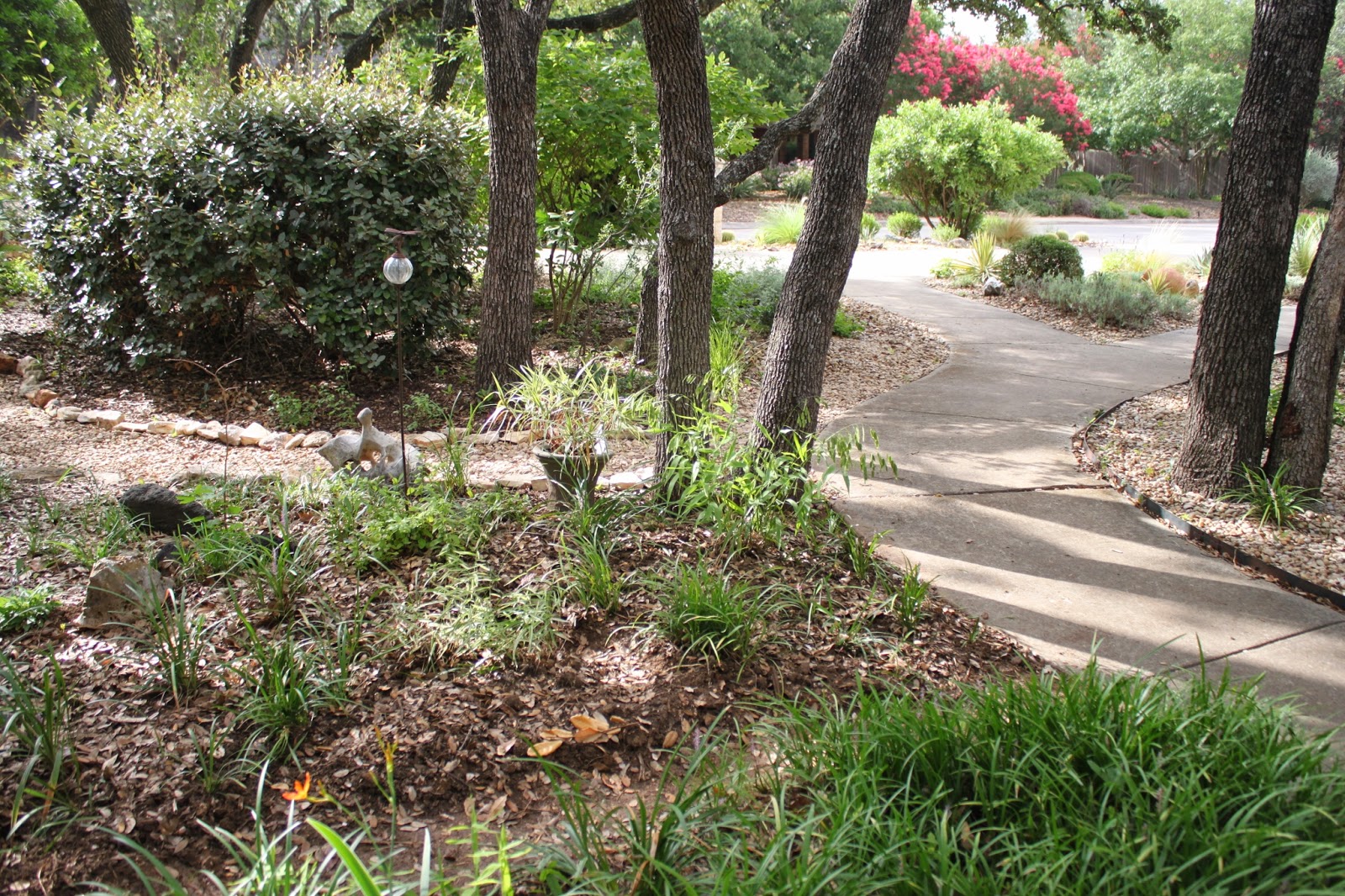 Through the back gate the summer garden is resting for a few weeks before it bursts into bloom again.  I've begun cutting back overgrown salvias to encourage the Gregg's blue mist flower blooms which bring in masses of butterflies.  The bright colors of bougainvillea so evident in early June photos have faded and the plants have been moved back by the shed to rest and wait out the drier, hotter days to come.  The buffalo grass lawn is finally looking much better after several months of refurbishment and we will keep it green this summer to ensure it is well established by fall. 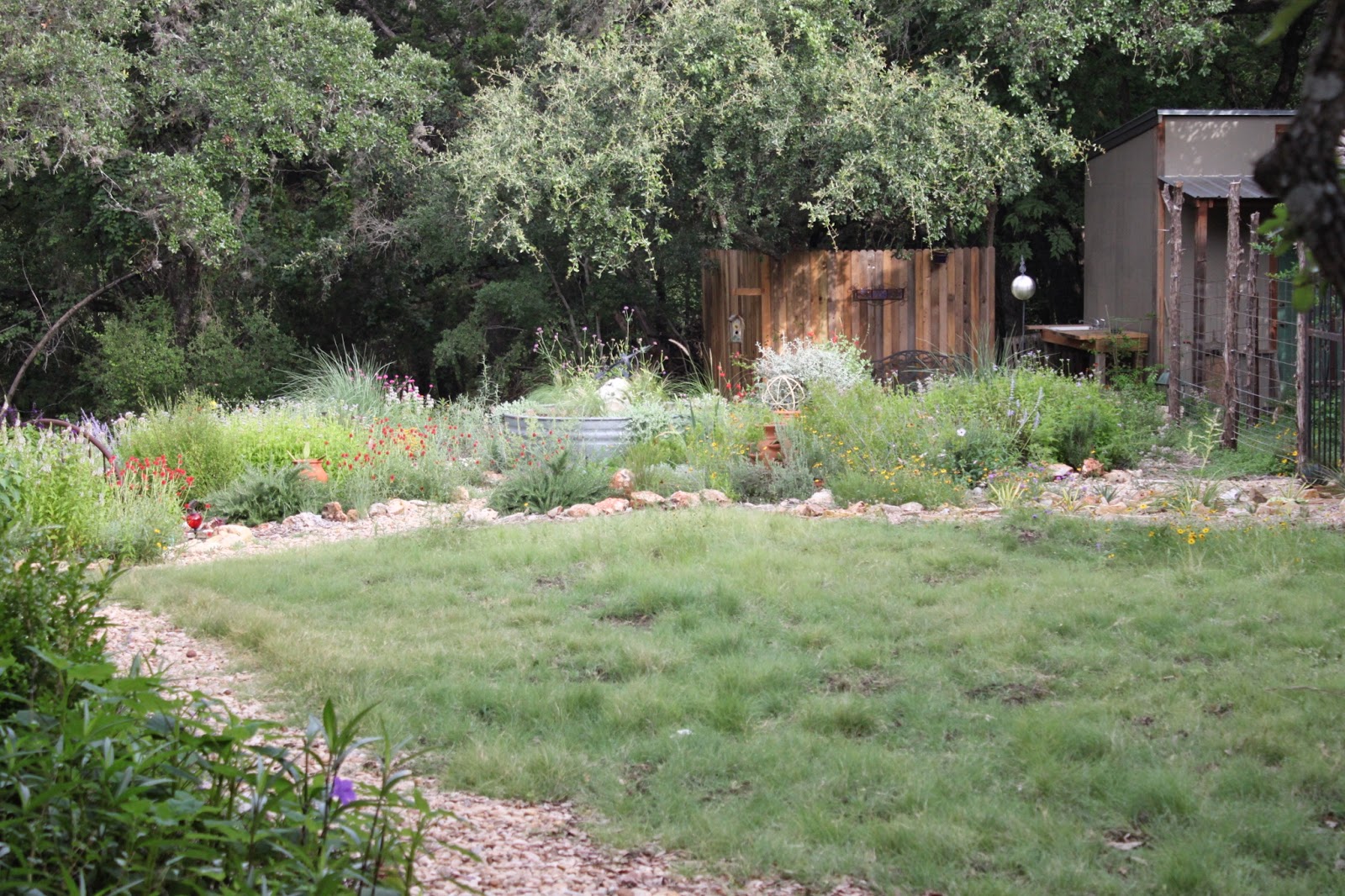 The tall clammy weed plants have been removed from the center stock tank .  There's still plenty of it around for bees and seeds.  Here's the "Before" so you can see the difference. 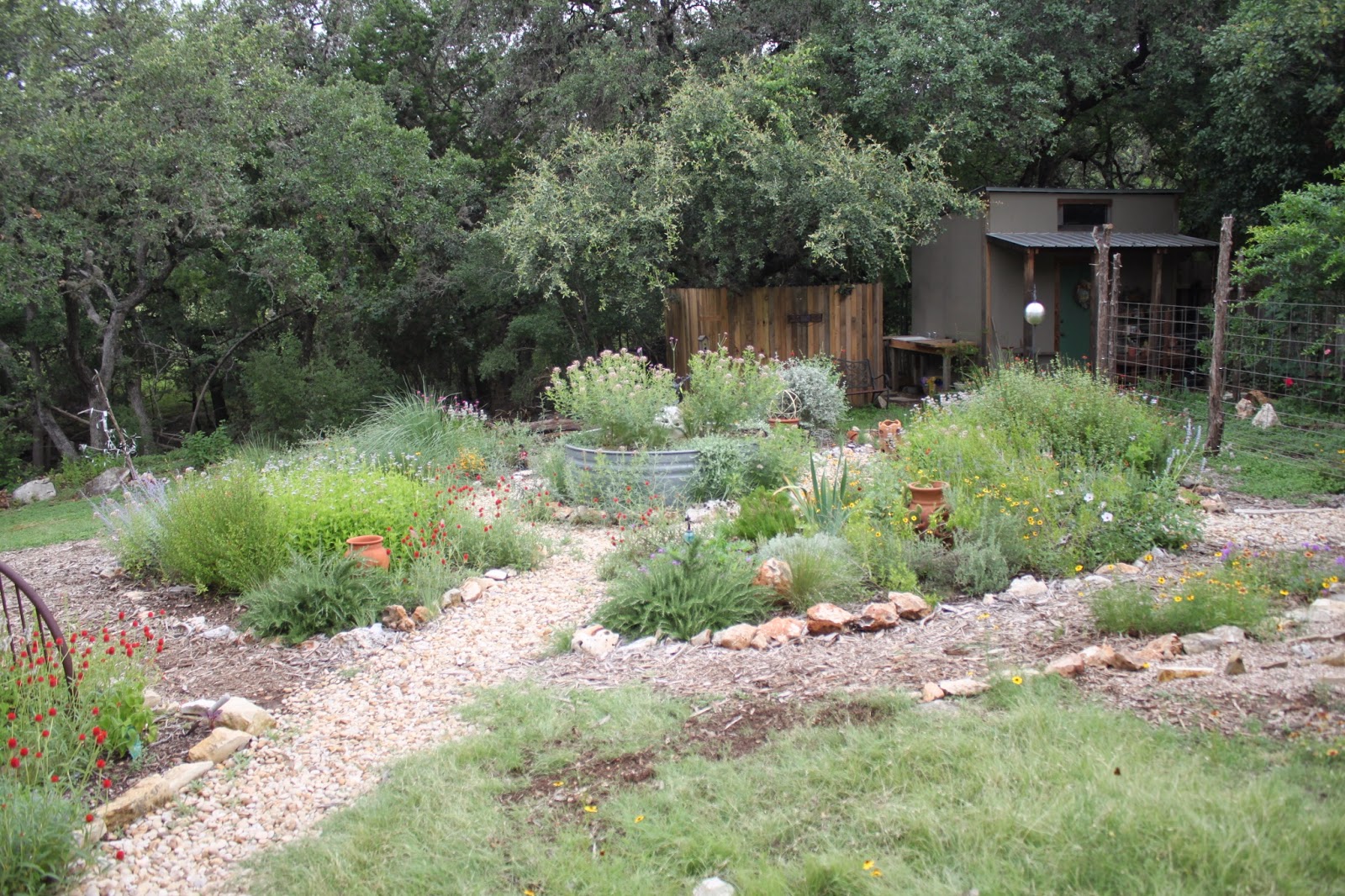 After looking at the above photos I decided to move an old iron gate over to the new potting area so it can disguise the edge of the bench and provide a trellis for the bougainvillea. 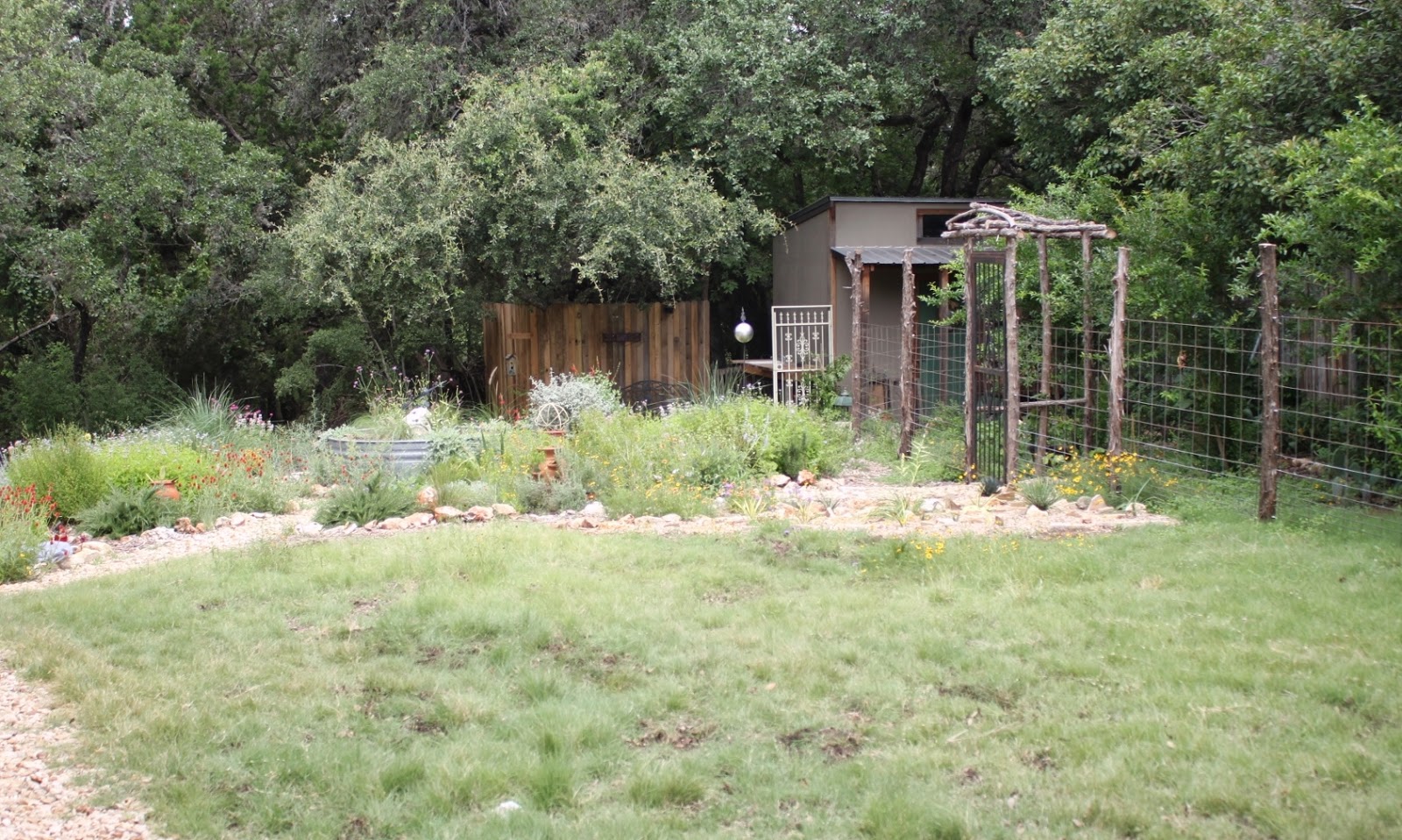 Looking back up the hill Nolina Lindheimeri is blooming in the middle of the new crevice garden.  This is where the pea gravel from the front path was recycled. 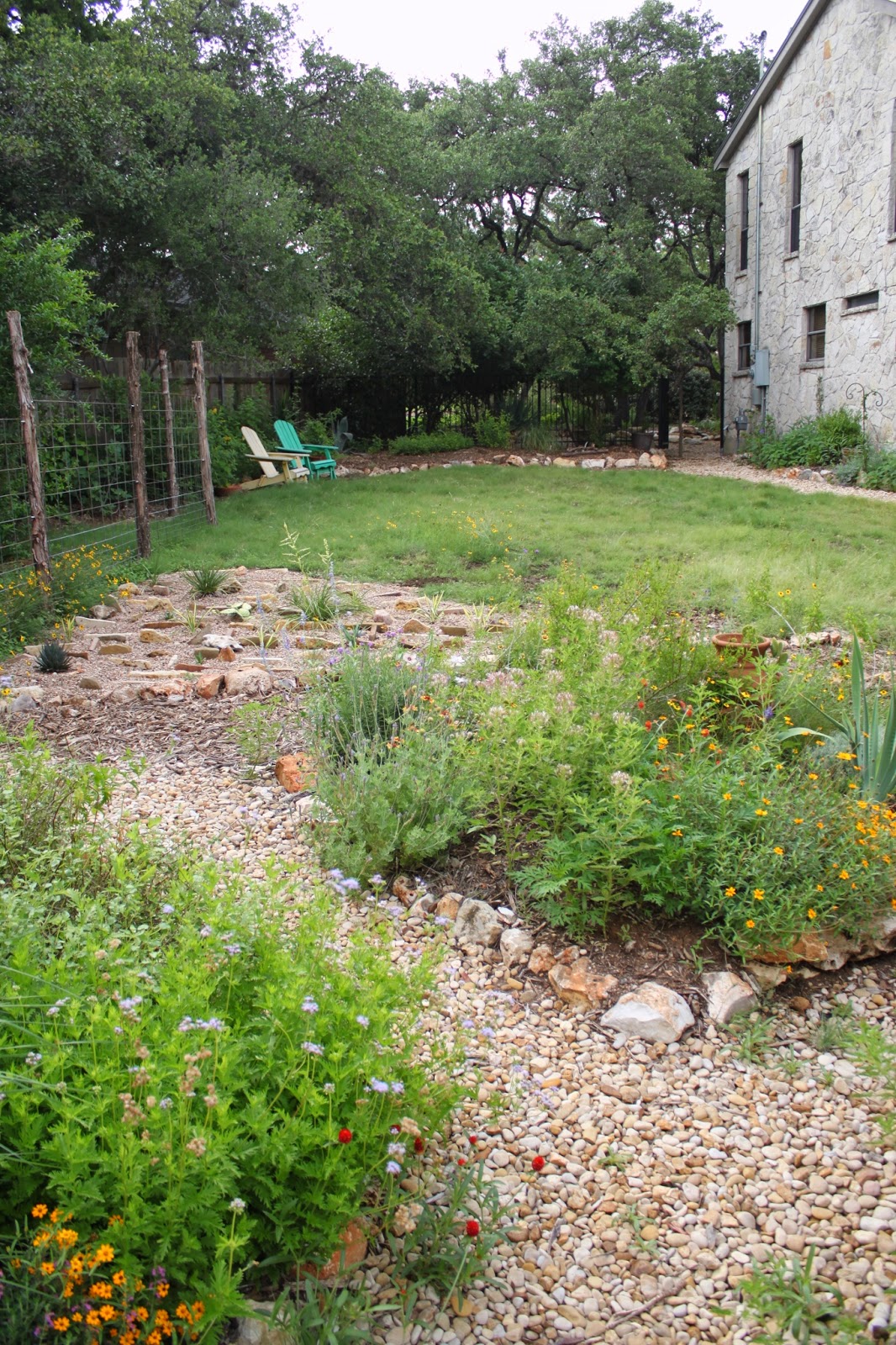 I never get tired of this view over the side fence.  It's a good thing because this is the side we use most often in daily tasks around the house.  Still waiting on the native sedges planted along the stone path back in May to make their move.  I do see a bit of new growth on some of them but I expect they will be slow as the summer heat settles in. 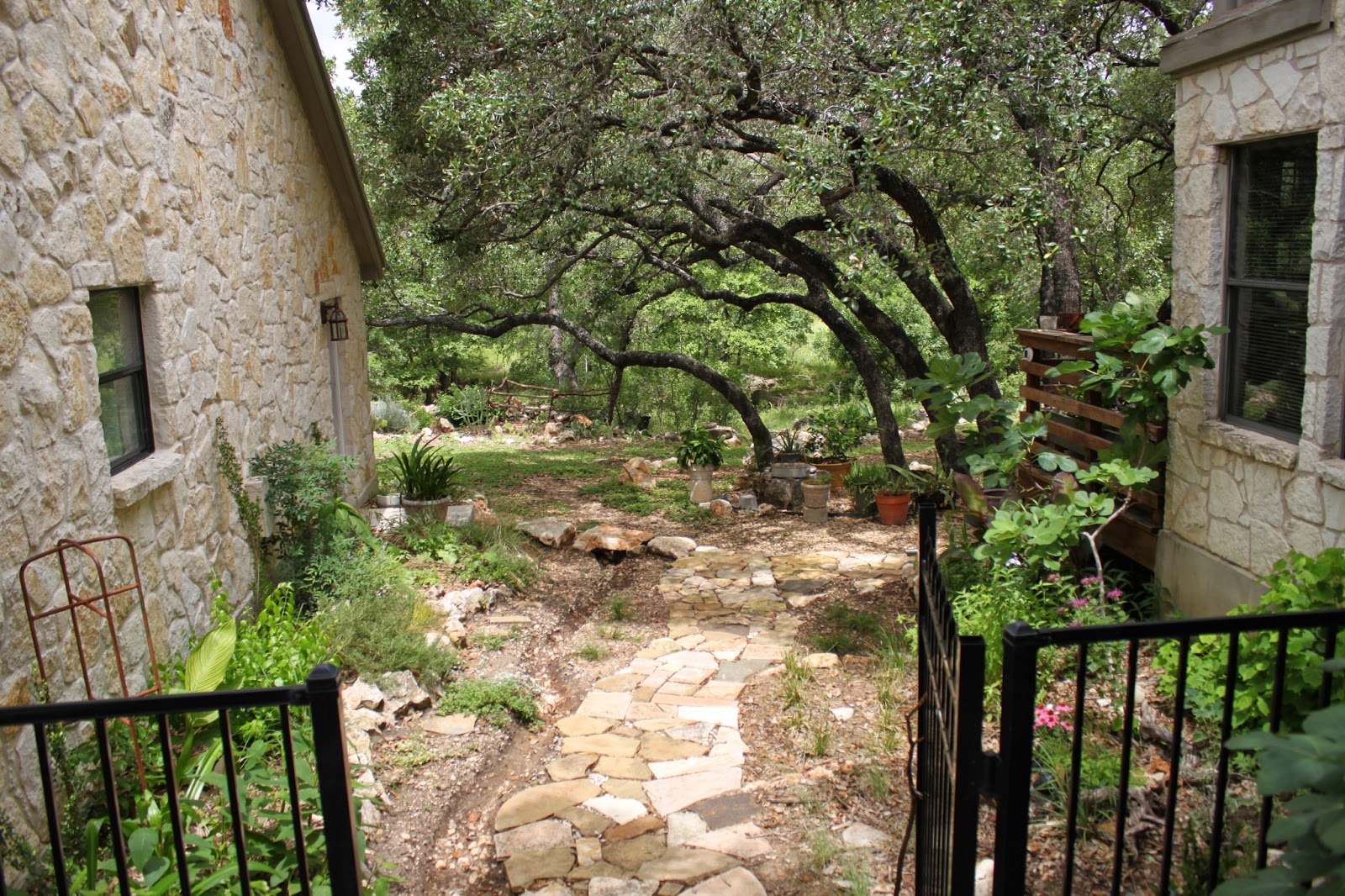 Just when I think Sunflowers will never grow well in my garden one pops up in the midst of the Gregg's Mistflower.  I think it's a native Maxmillian Sunflower which were originally planted several yards away near the fence.  It looks very happy here and makes a nice ending to our June tour. 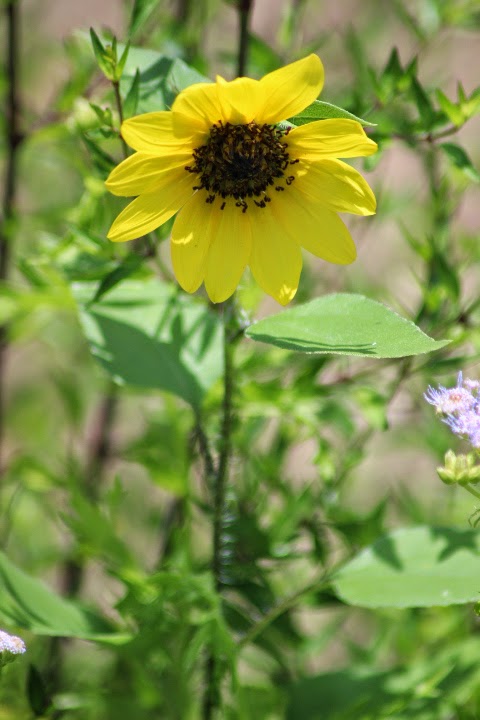 That's the view of my garden at the end of June 2014 and you can check out Helen's blog to see more garden tours.
Posted by Shirley Fox at 2:49 PM