Before and After: Replacing a weedy patch with a new garden

It's getting hot out there now and with work in the garden slowing down it's time for an update on recent projects.  The first is in the back yard near the circle garden.  Last year this sloped area next to the fence sported a patch of weedy groundcover surrounded by wildflowers.  Not the best, but we had other fish to fry back then. 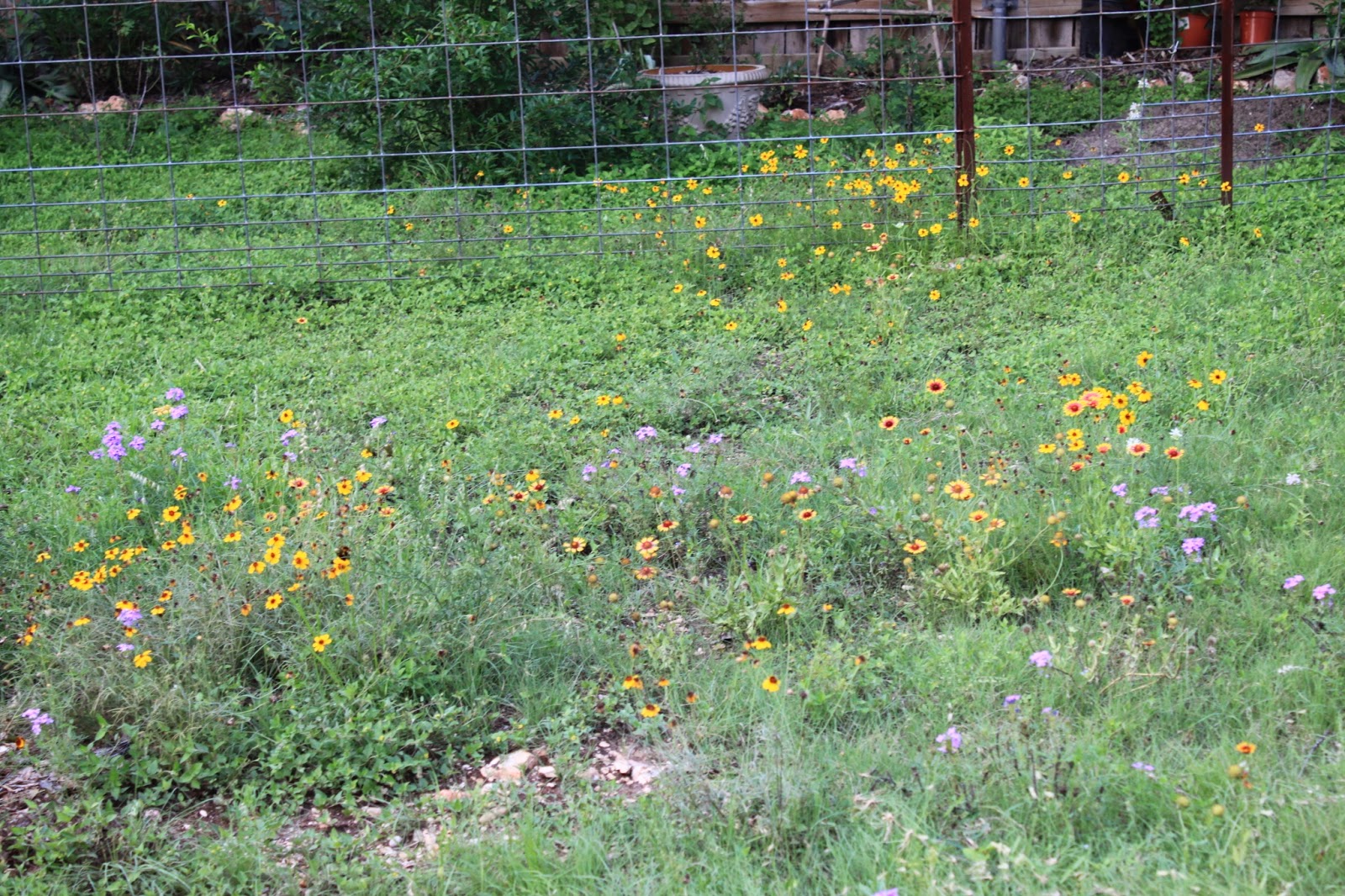 The lack of winter rains plus several years of soil erosion had made the situation worse in this sun-baked area of the yard.  The good news was that even the weeds were now mostly dead so we removed the remaining ones and considered our options.  The plan was to level it out and replace the topsoil for extending the buffalo grass and wildflowers down to the path until I thought of a better idea. 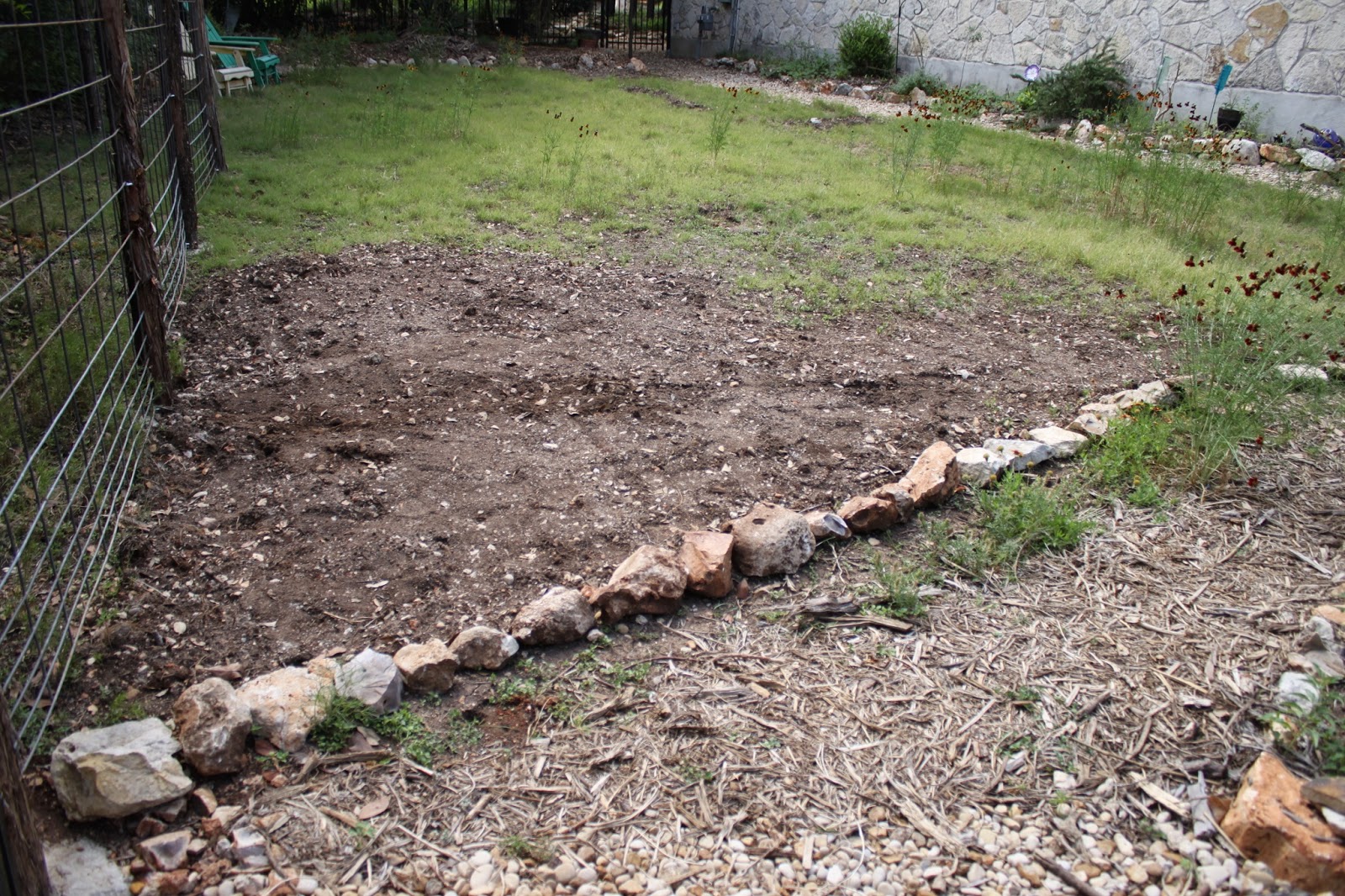 Here's a hint on what that idea might be.  It involves flagstone pieces leftover from a neighbor's project. 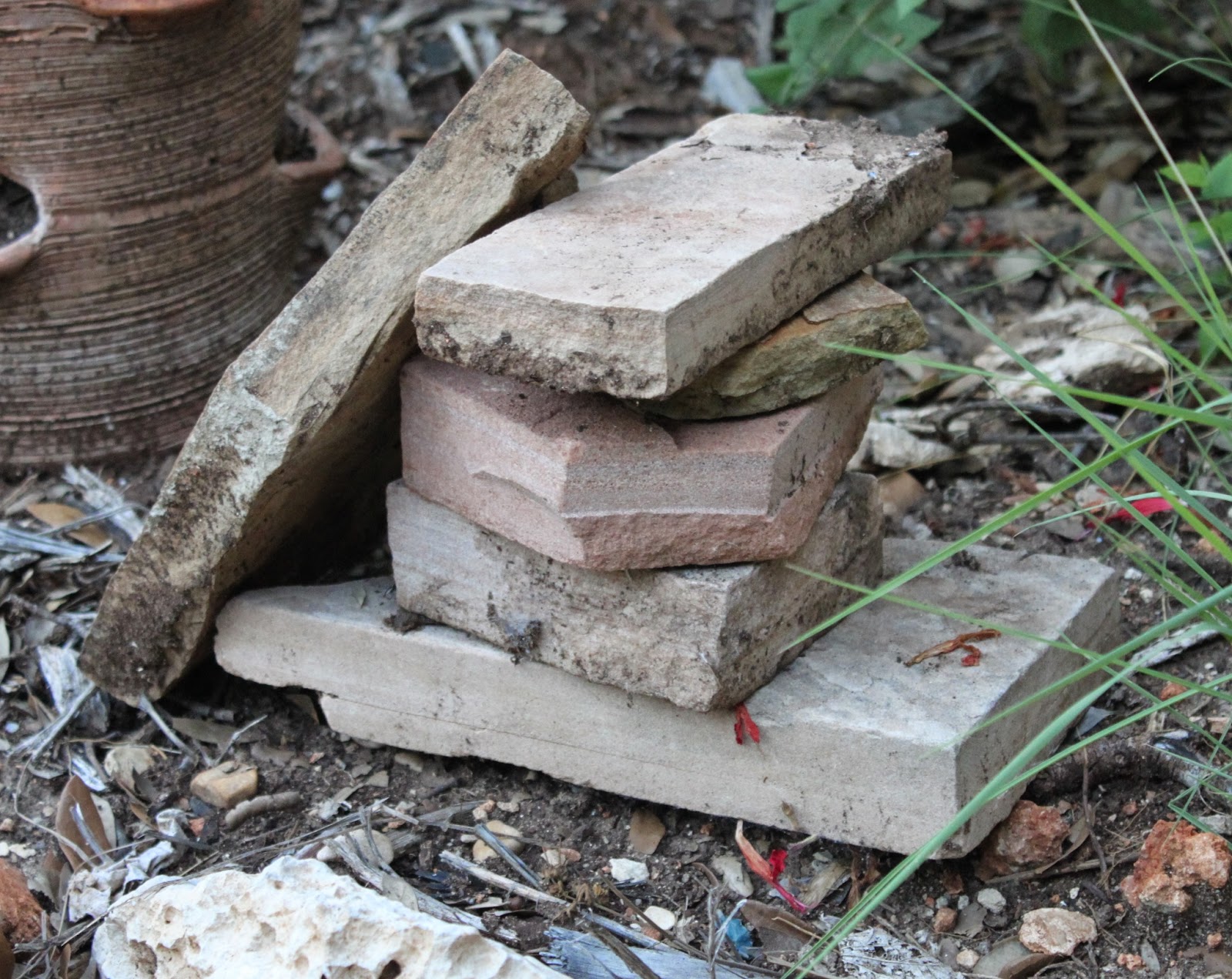 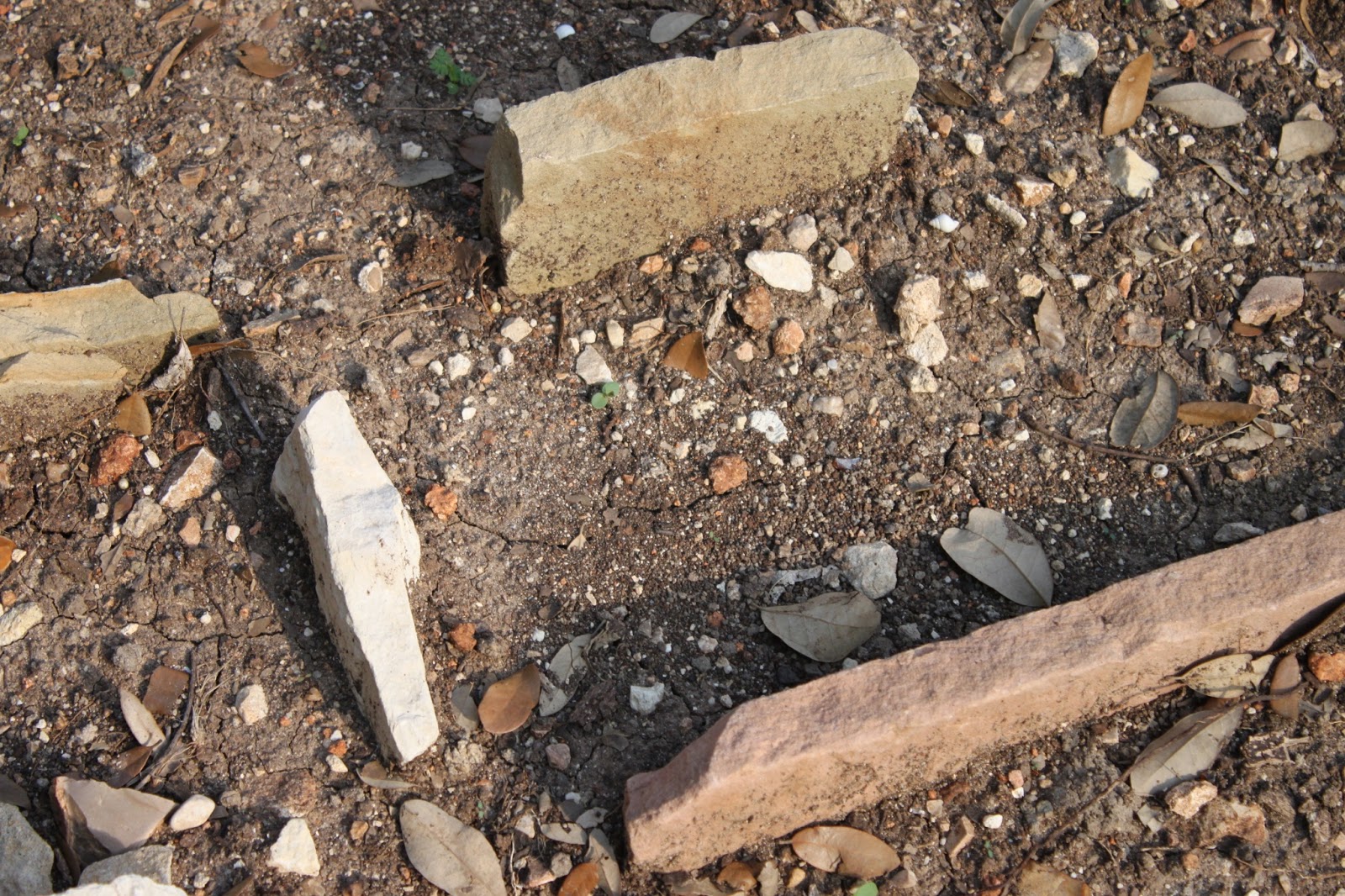 It's a crevice garden for all those heat-loving plants that grow so well in our climate. 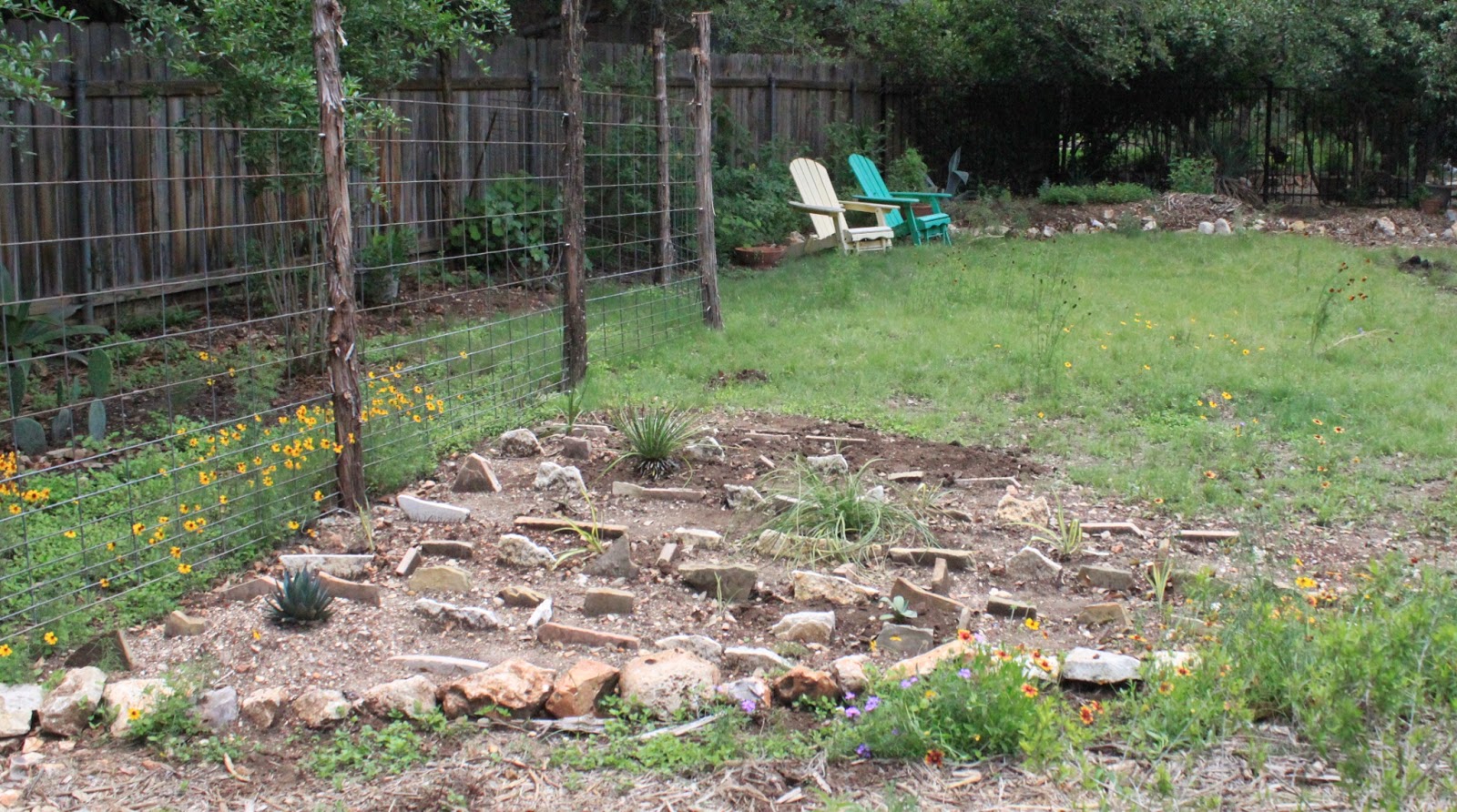 There are plenty of photos and detailed instructions for the proper design of a crevice garden online and since most of them are meant for tiny alpine plants which don't grow well in South Texas I generally ignored them.  Besides that, they didn't look anything like the agave crevice garden I spotted about two years ago on Danger Garden.  I loved it at first sight and even though my original choice of a location didn't work out I kept coming back to the idea.  You can read more about this garden and see a variety of crevice gardens on Loree's post here.  Special thanks to Loree of Danger Garden for permission to use the inspiration photo. 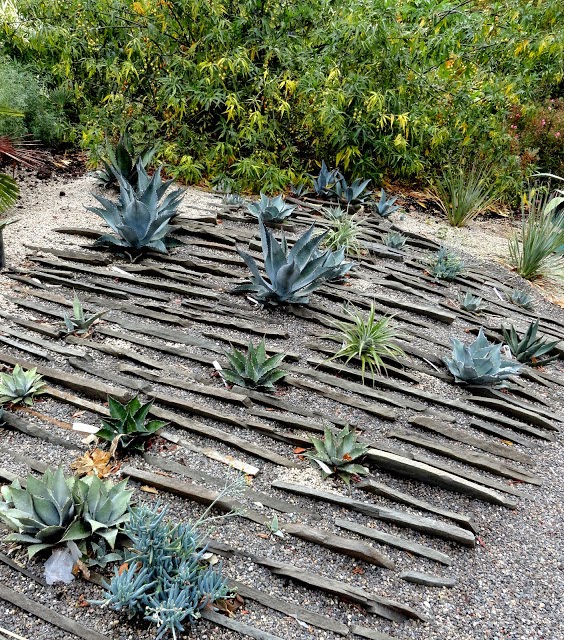 Neal was skeptical at first and hesitant to endorse the project.  When it comes to heavy lifting around here I need his help and it took some convincing along with a small test plot before he agreed to give it a try.  We began sticking collected rocks and flagstones in the soil. We both liked it more than we expected.  So much so that the arrowhead shape is Neal's idea.  You've probably noticed we left a lot more space between the stones compared to the inspiration garden and we do plan to go back and add more once the plants are set.  I was so quick to start planting that I forgot to take a photo with just the stones before we did a test run for planting. 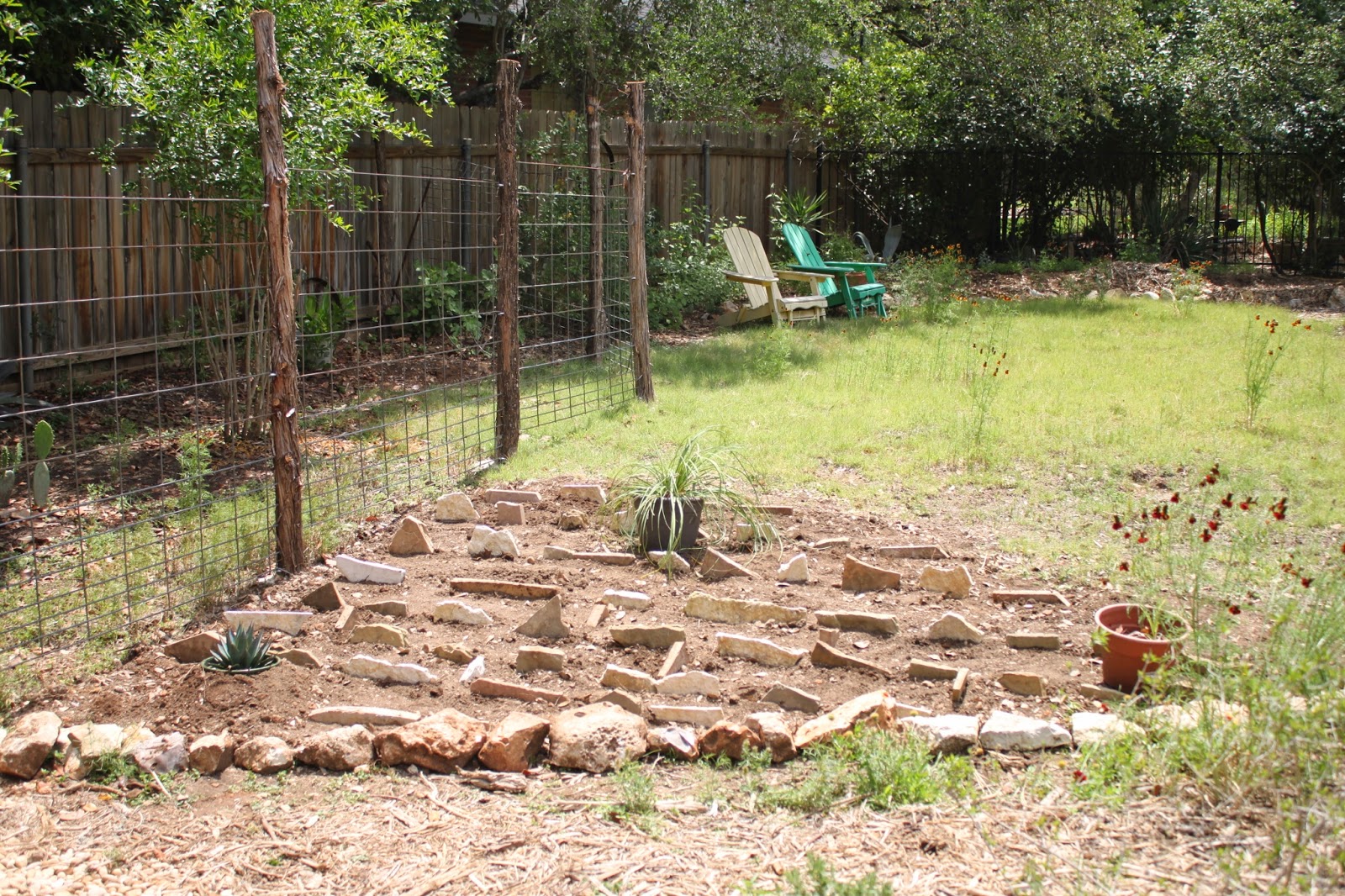 Plants that were stashed randomly around the garden have found a home now.  Several Yucca 'Color Guard' pups, a small Nolina matapensis (against the fence back right because it gets tall) went in.  No special soil or gravel mix needed because these plants grow quite well in basic topsoil as long as they have good drainage. 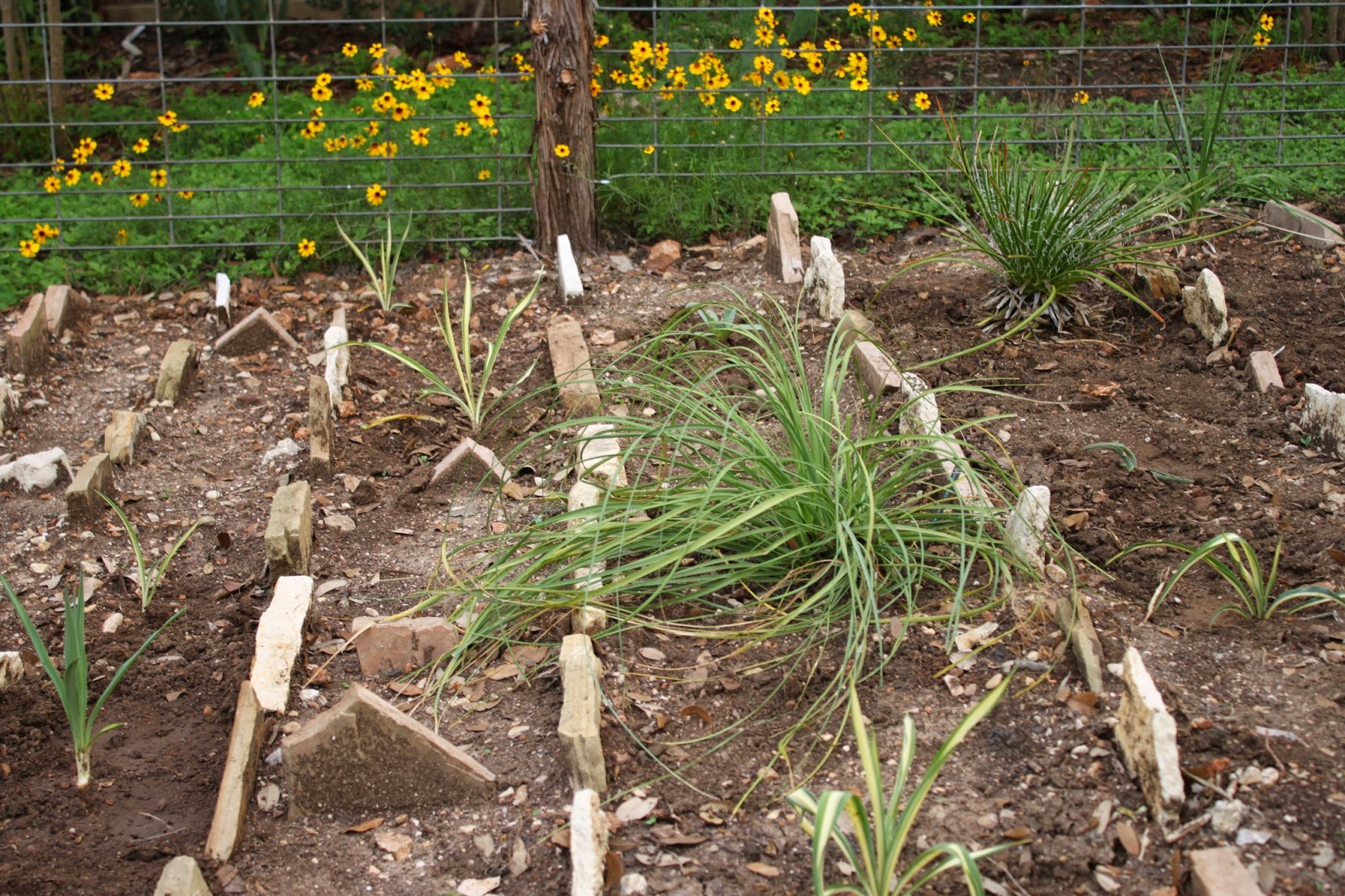 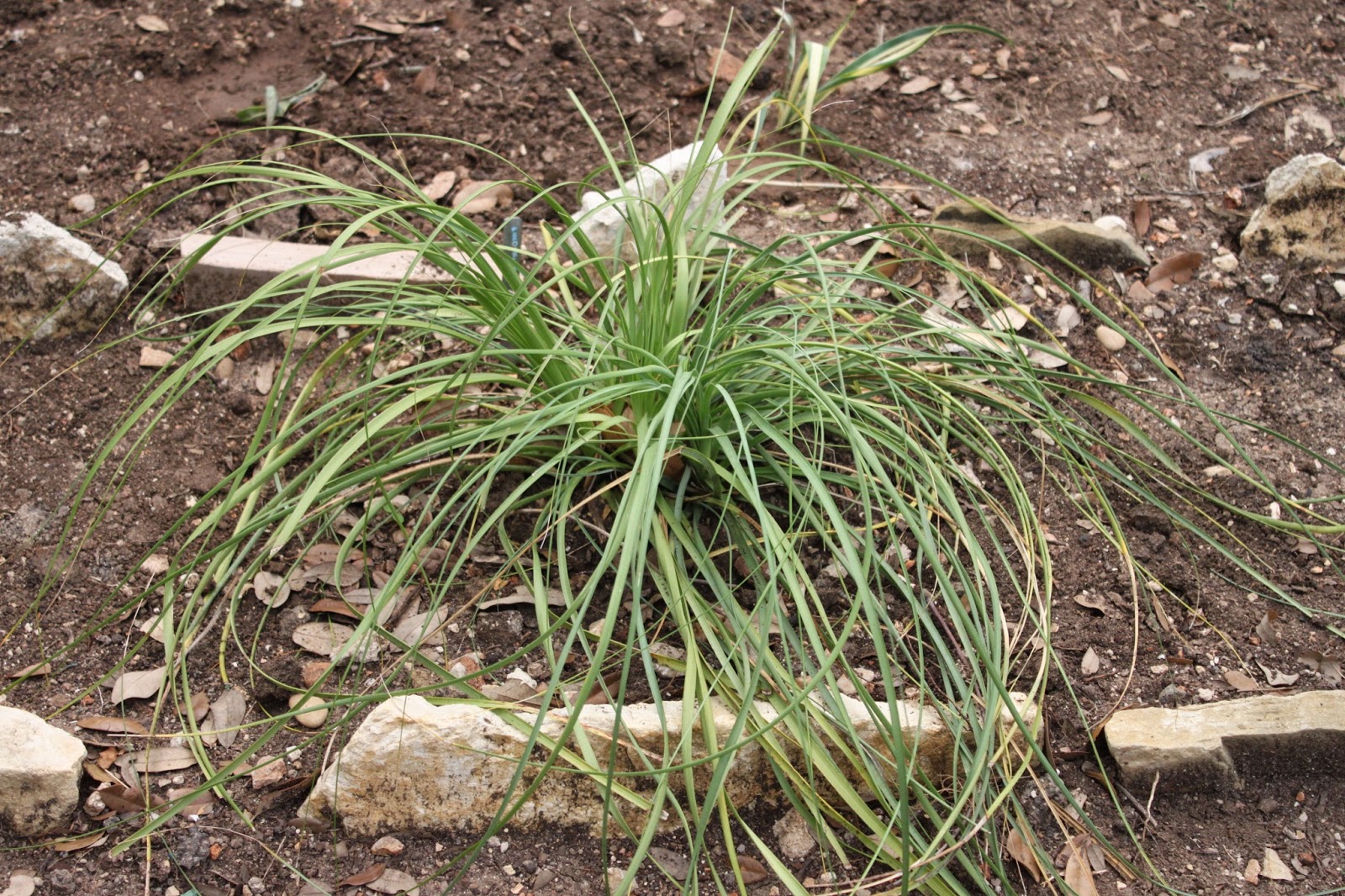 One very rootbound Agave geminifolia which should be happy to be in the ground. 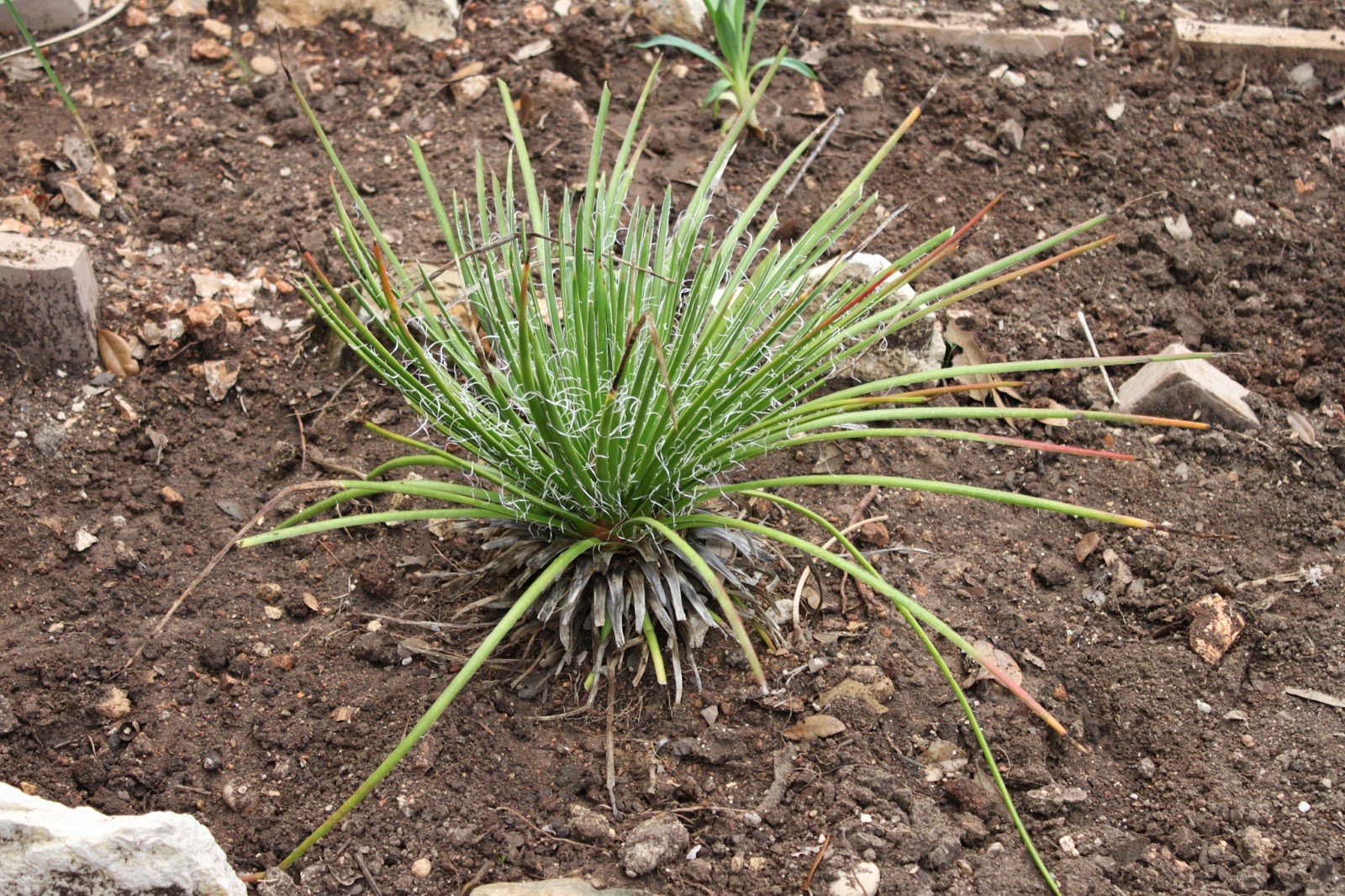 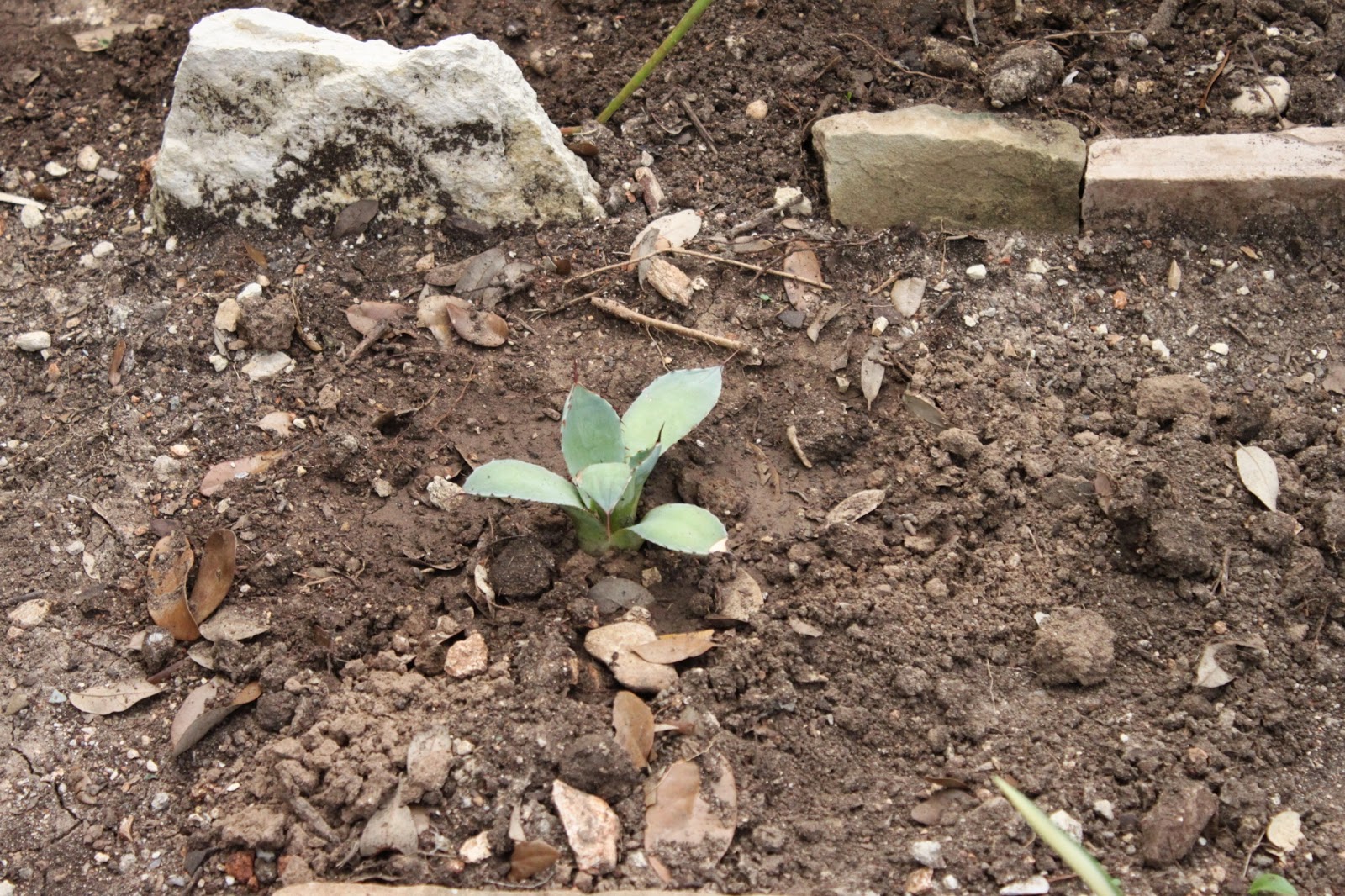 Agave 'Blue Glow' was the only new plant purchased for this project.  I've wanted one of these for a while so it's a great excuse.  New garden, new plant and I was so good in using existing plants too. 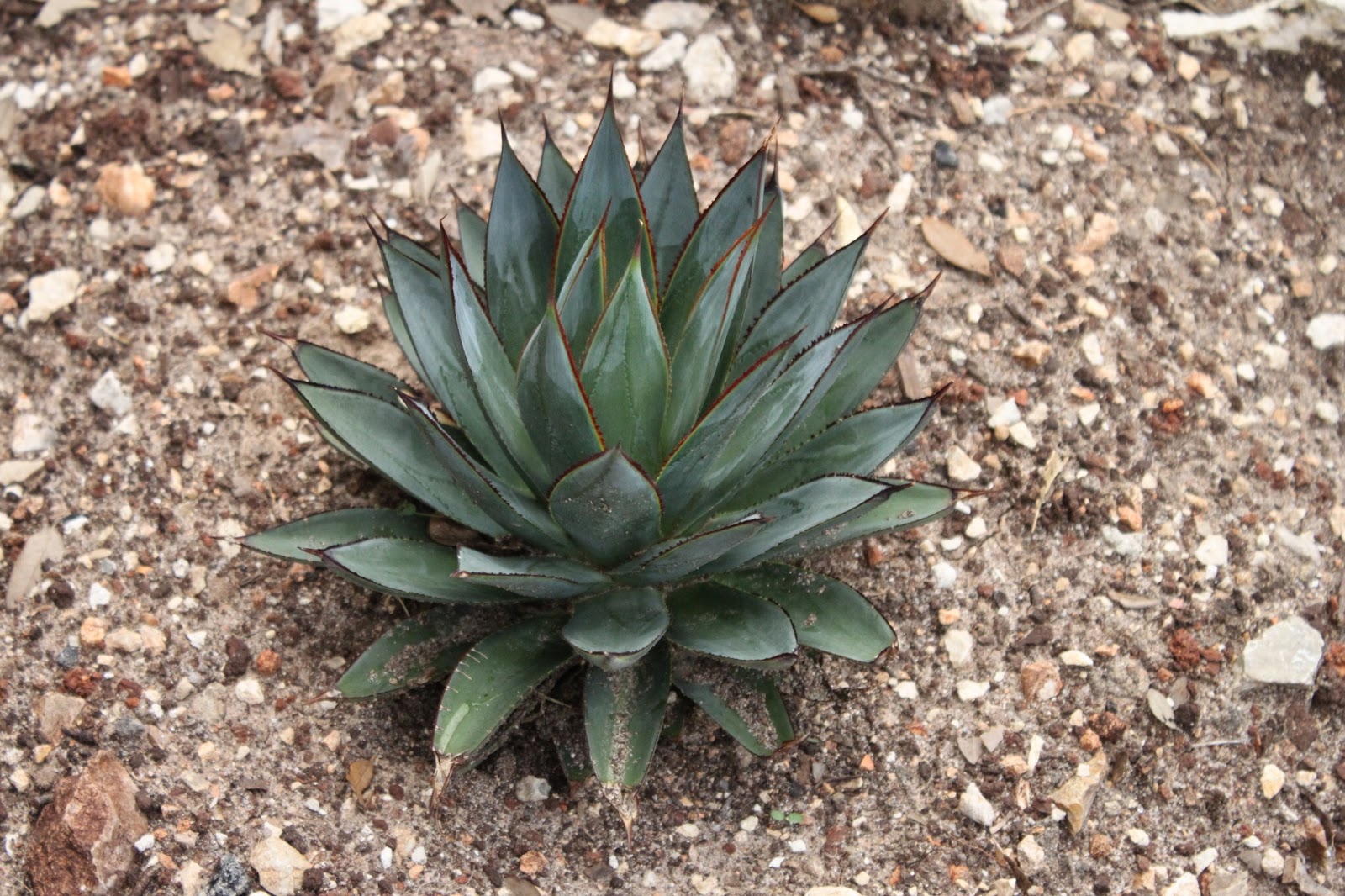 Here's the long view from the front gate.  I like the way the crevice garden sits into the slope and is not quite visible until you walk the path to the circle garden. 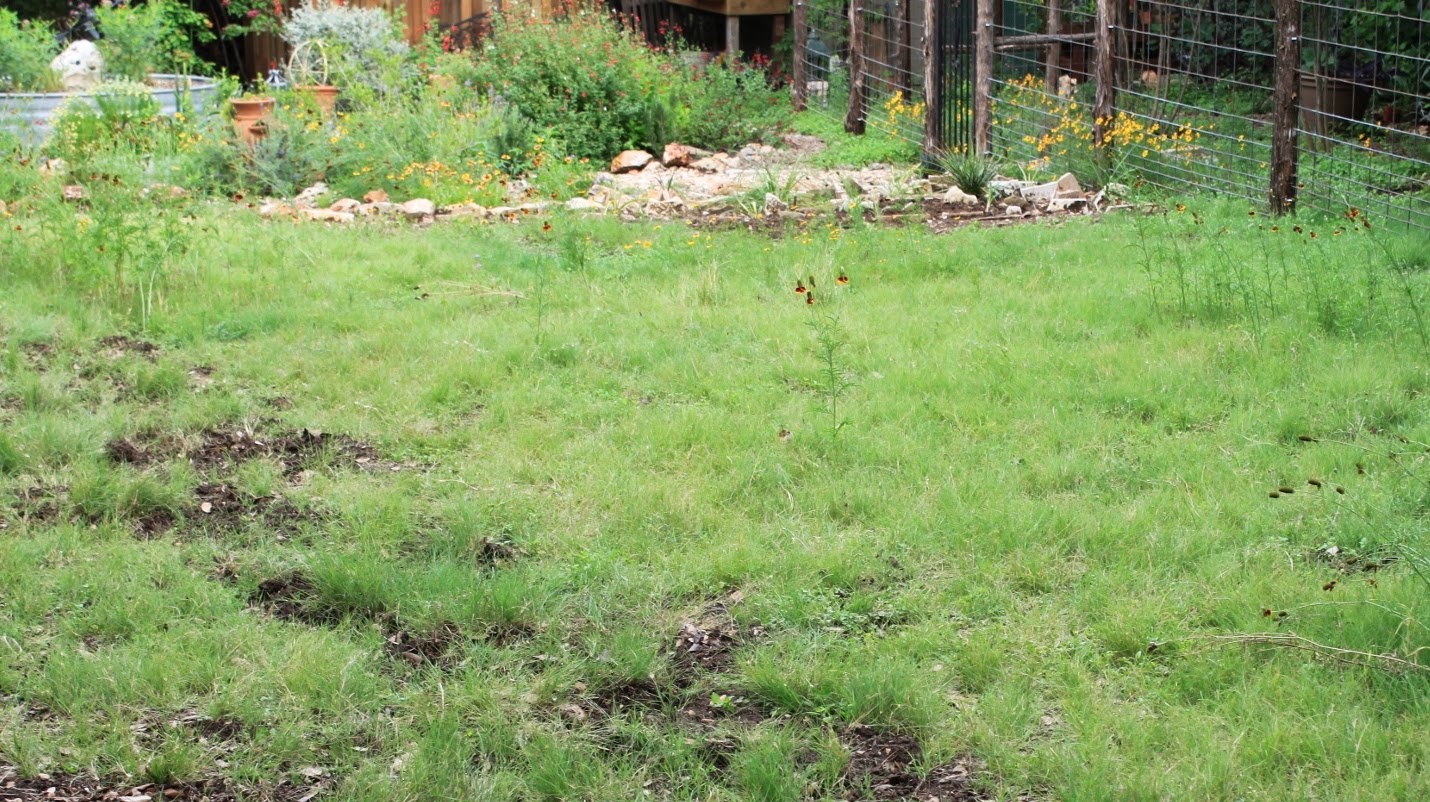 The bright yellow Navajo Tea flowers along the fence and the rest of the wildflowers are nodding their approval.  Currently the space measures about 13' x 10' which could get larger if the drought continues or we decide to remove more rocks and lawn.  This spot gets full sun from morning to night and hot, hot, hot all summer.  The rocks will settle in over time and it should look less like a miniature cemetery after a gravel topping is added. 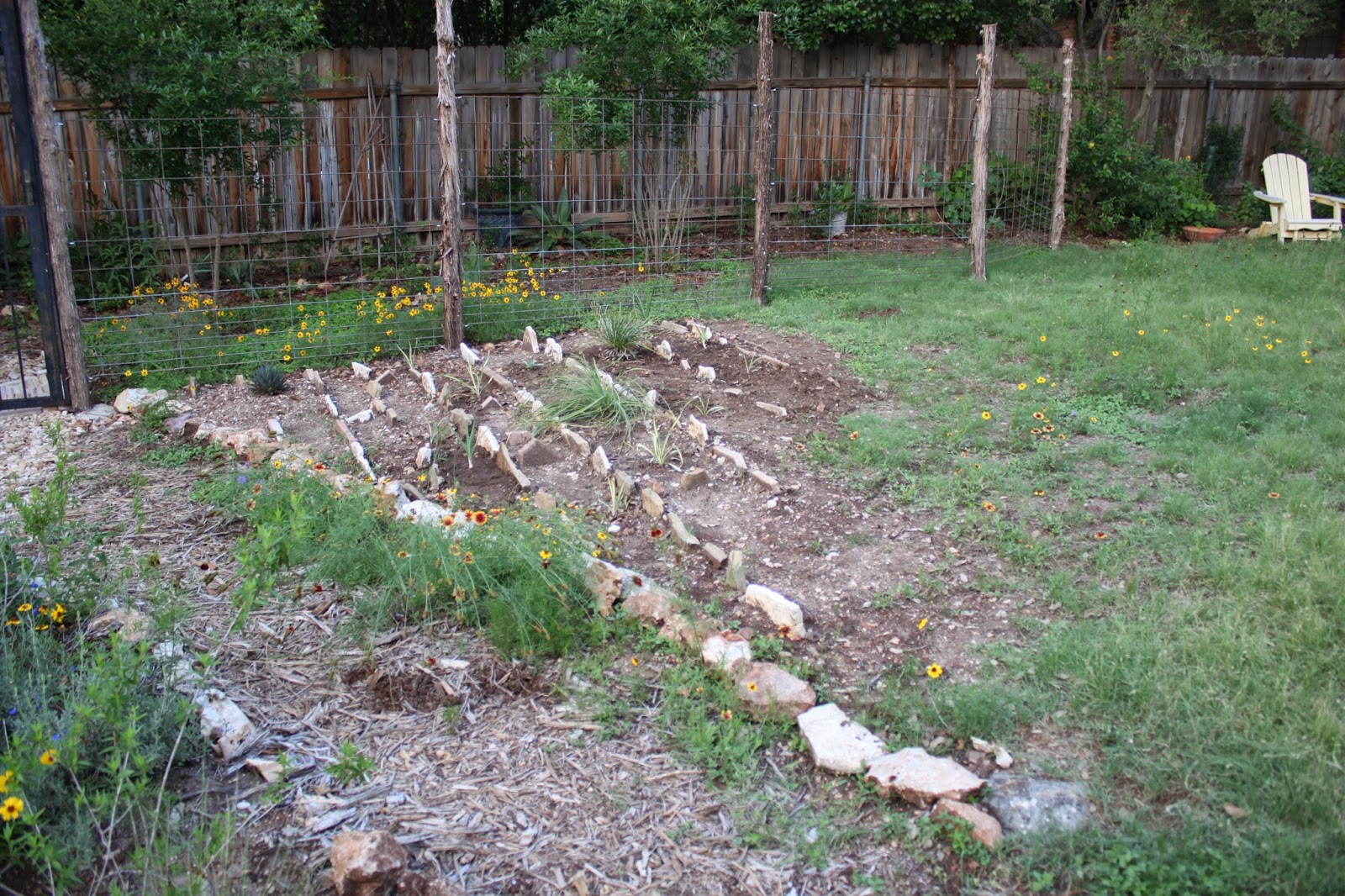 So that's one project down and I have a few more new ones to share later this week.
Posted by Shirley Fox at 2:30 PM