In December 2011 I wrote about my hopes for "Leap Year" in my front garden which was re-planted about three years ago.  As the saying goes perennials follow a three year pattern of "sleep, creep, leap" and with this being the third year for much of the front garden I had high expectations.

Intending to write the halftime report in early July, I found that things were not going well out there and decided to wait.  Some parts of the garden don't look that much better in the heat of August so it's time to be realistic and assess what did not go right and needs to be corrected this fall. 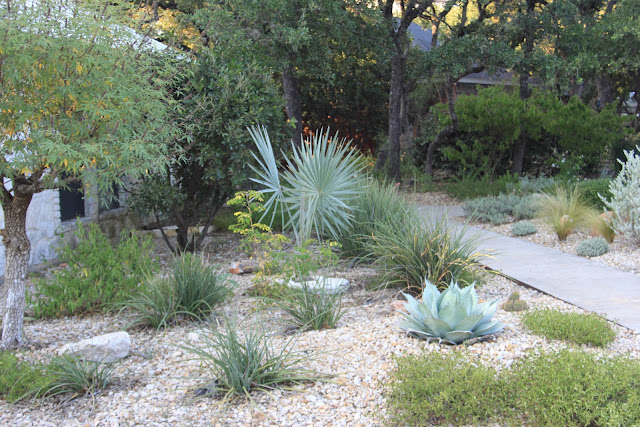 The garden area nearest the front door was planted three years ago and was almost immediately hit with two years of record freezes and drought.  That's where I'll focus in this post.
The Blue Hill Salvia (Meadow Sage) was meant to grow over the low rock terracing, but has died back again in the heat of the summer so I plan to add Nepeta 'Walkers Low' which thrives in the summer heat.


Oak sprouts are a fact of life under live oak trees and spring rains brought on a bumper crop. 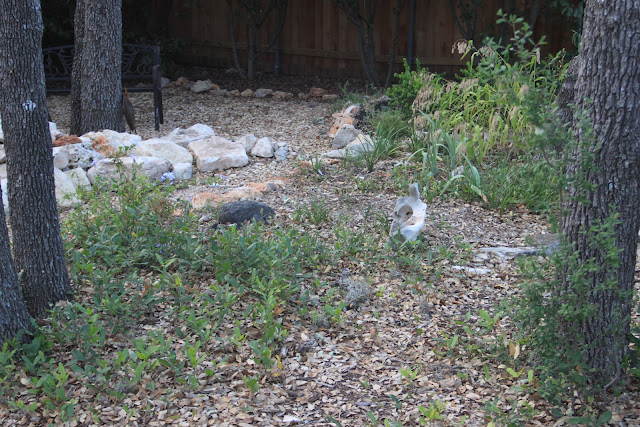 Trimming the oak sprouts is only temporary and I can't keep up so I'll take a tip from local landscaping pros and plant a groundcover disguise where they present the biggest problem.  If that doesn't work then I might just let them grow as ground cover as shown in The Desert Edge blog. (scroll down to the third photo in David's post)

The Inland Sea Oats (Chasmanthium latifolium) should have been divided last fall and are splayed outward from an empty center.  They will be divided as soon as the weather cools.  I'm reworking this entire bed around the tree since the iris get too much shade in early spring to bloom properly here.  Salvia 'Indigo Spires' (right of the tree) bloomed well in the winter but continues to wilt every afternoon in the summer. 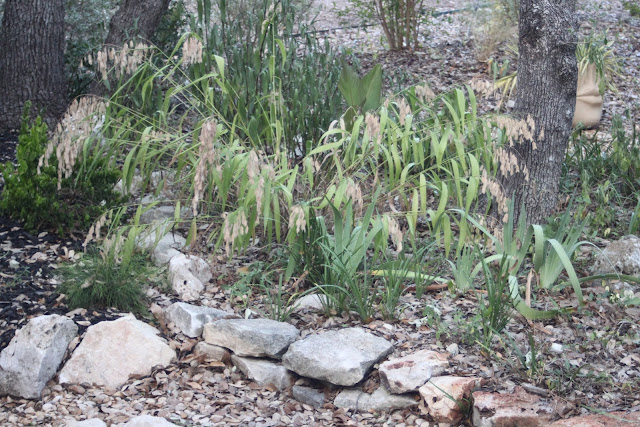 The bed of white blooming and silver foliage plants has filled in a lot.  But the oaks have also filled in so the bed gets too much shade, so the plants are not blooming.  The best bloomer here is the white Plumbago (Plumbago auriculata 'alba').  Most of these plants will be relocated and I have plans for a sedge "lawn" which should do well in partial shade.
Russian Sage in the island bed has underperformed this year and is obviously declining.  It will be replaced with low maintenance yucca and a new blooming plant.  You can see how this spot should look in the photo second from the right in my blog title collage.


The Creeping Germander continues to creep along, although slowly.


Across the way the Hamelia patens and Flame Acanthus (Aniscanthus quadrifidus var. wrightii) are not getting enough sun to bloom and Calistemon 'Little John' continues to grow very slowly and I need to check to see if it is in too much rock.  Typical of the rest of the area, the blue Plumbago is also the best bloomer here.


There you have it, the part of my yard I see most often is not looking the way I'd like it to look at all.  Far from being discouraged, I plan to rework the problem areas as soon as the weather cools off.  This will be an opportunity to apply what I've learned about gardening in San Antonio over the last three challenging years.