The Yucca rostrata has landed

Texas Native Plant week finished in rather spectacular fashion with the addition of a Yucca rostrata to my front garden. 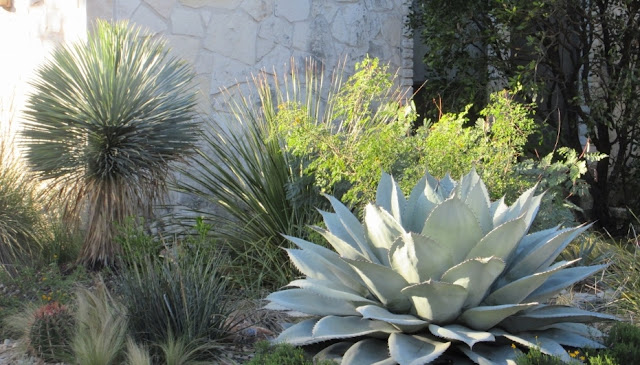 And it has quite an adventurous story to tell.

First, it's been a while since the original Vitex which occupied this spot for 20 years met its demise.  Shortly afterward I replaced it with a silvery Yucca rigida purchased from Barton Springs Nursery in Austin.  The next morning we found the Yucca rigida had fallen over in high winds during the night.  We set it upright but apparently the damage was done and it never recovered.  There were times when it looked as if it might grow again so I left it in place until the base finally rotted through about 15 months later this past July.  Meanwhile I had discovered Kenny at Fredericksburg Trade Days flea market.   As a Texan and yucca lover how could I walk by this setup and not go in to look around? 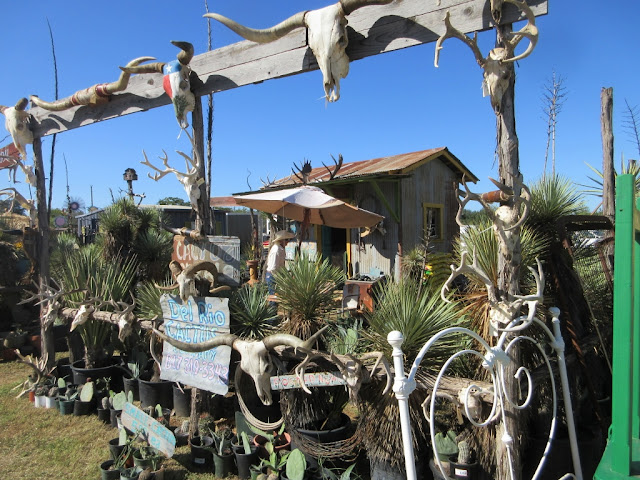 Kenny lives out in West Texas in native Yucca rostrata territory.  His friend grows yuccas (actual location is a secret) and allows Kenny to dig and transport these beauties himself making his prices and yucca stock the best around.  When my Yucca rigida died I contacted Kenny and after some back and forth discussions over several months I was disappointed to hear the Yucca rostrata I finally decided on had been sold and we agreed he would bring more in November.

On Saturday I called Kenny to find out what sizes would be available in November and learned his customer had decided on a smaller yucca, so the five foot stunner was still available.

"I'll be there in the morning."  Since the flea market is open just one weekend a month I had to act fast and enjoyed the beautiful 75 mile drive through the Texas Hill Country. 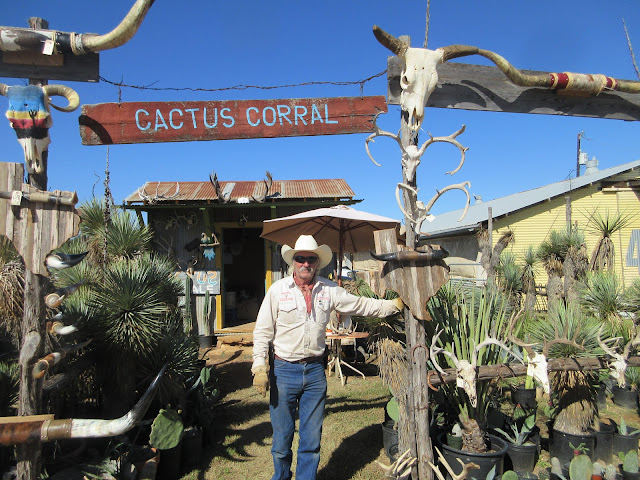 There she is!  The big one straight back behind and slightly right of the table.  He also has some beautiful Thompson blue yuccas at incredible prices. 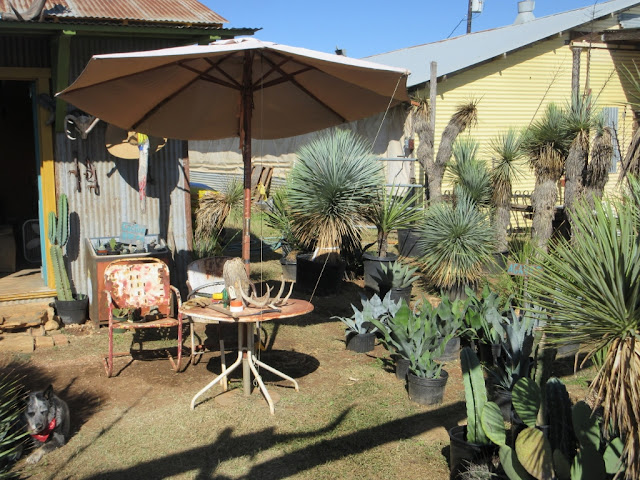 A major issue all along was how much yucca we could fit in the SUV.  We had measured and knew it would fit.  Six feet (72 inches) with the root ball. 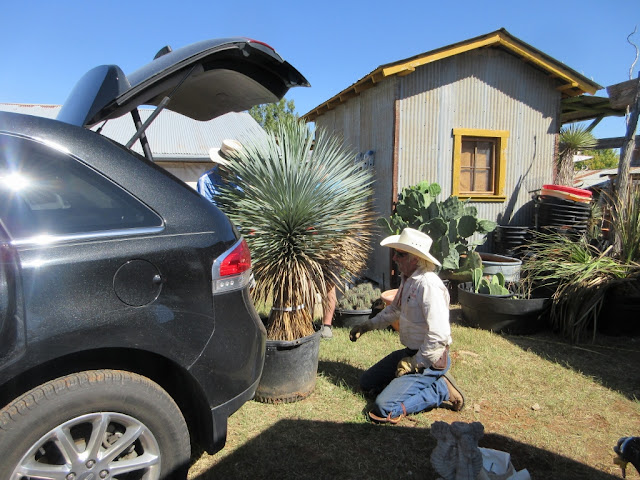 Just fits diagonally.  What a mess!  Per Kenny's recommendation we brought along something to support the trunk, and this empty laundry detergent container did that perfectly while also working as a shock absorber on the road back. 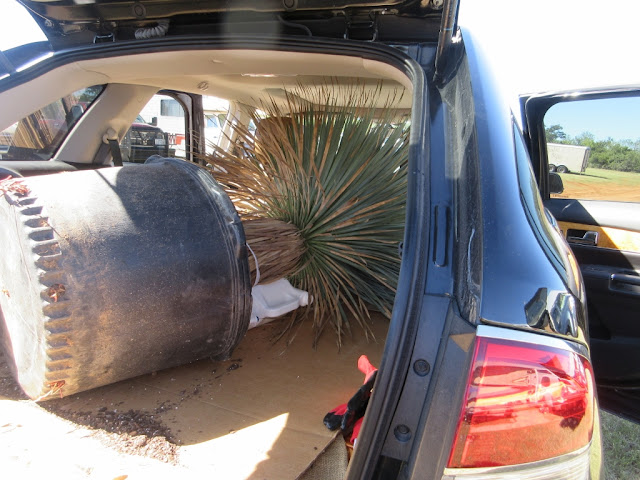 There's Kenny washing dirt out of his brand new hat which was knocked off in the loading process. 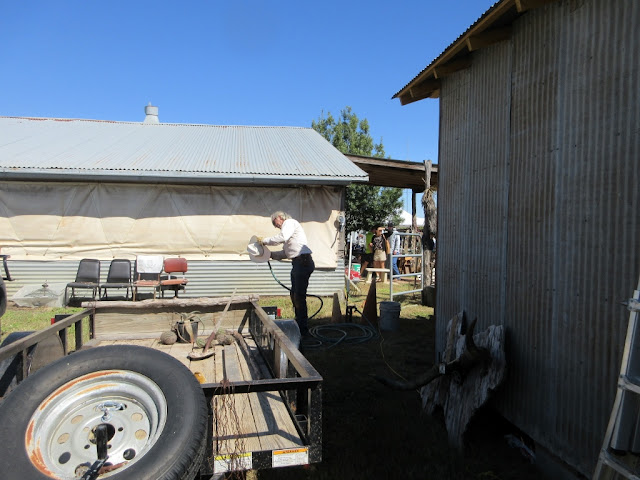 Back home we already had the hole ready to plant. 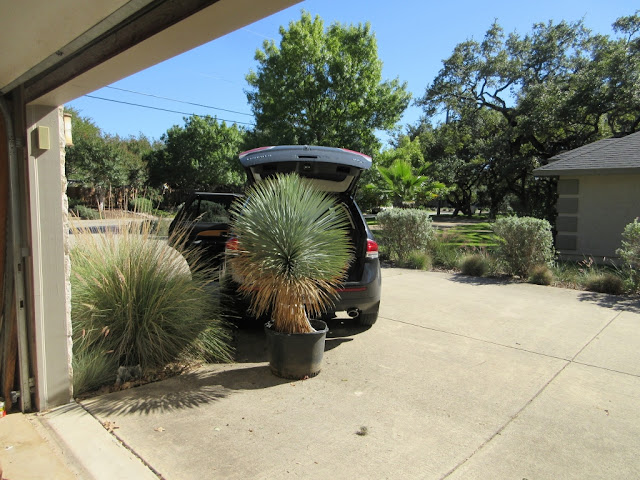 In it goes and the next step is carefully slicing the plastic off.  This one has been in the pot for a year so the root ball stayed intact (another problem we had with the freshly dug Yucca rigida).  Slightly mounded to ensure good drainage. 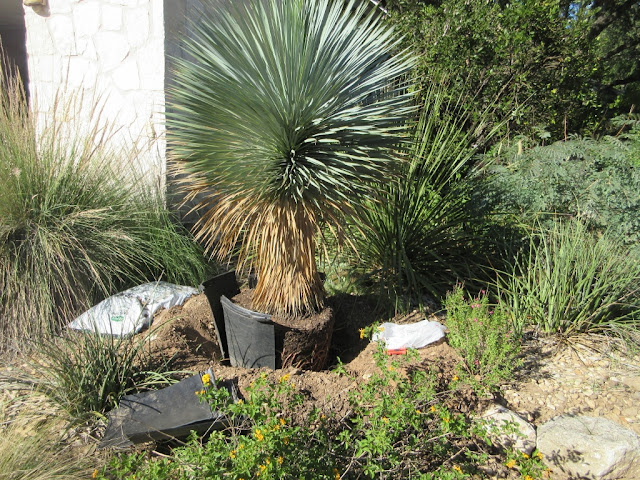 That's Neal making sure it's straight and level.  Very important given the prominent location. 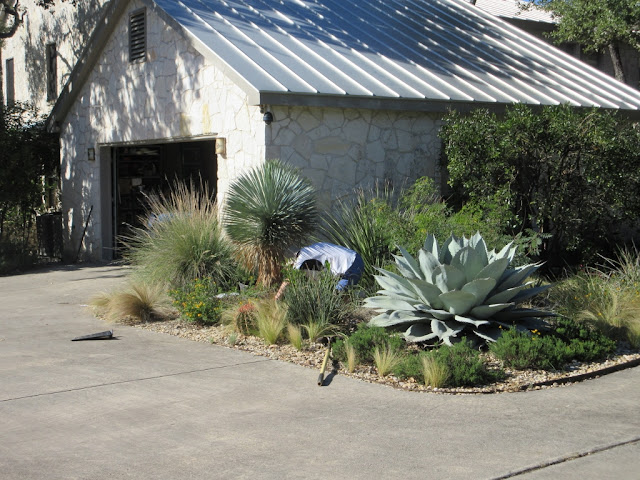 You look "mahvelous" next to the Agave ovatifolia.  Looks like the beginning of a beautiful friendship.

Did I mention Kenny's prices are really good?  No email, no website just call Kenny at 817-319-3343.  If you live anywhere near Texas and need a native yucca Kenny is your guy.