It's Texas Native Plant Week and I'm celebrating by featuring a visit to the home of  Ferdinand Jacob Lindheimer also known as the "Father of Texas Botany" in New Braunfels, Texas just a half-hour north of San Antonio.

The timberframe saltbox style was common to Texas German settlers in 1852.  This building inspired our garage built in 2010. 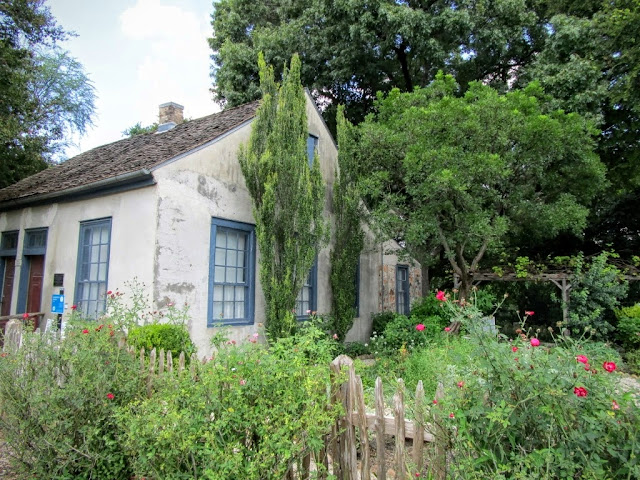 In addition to botany, Mr. Lindheimer published a German language newspaper.  His office is through the door on the right and the family home on the left. 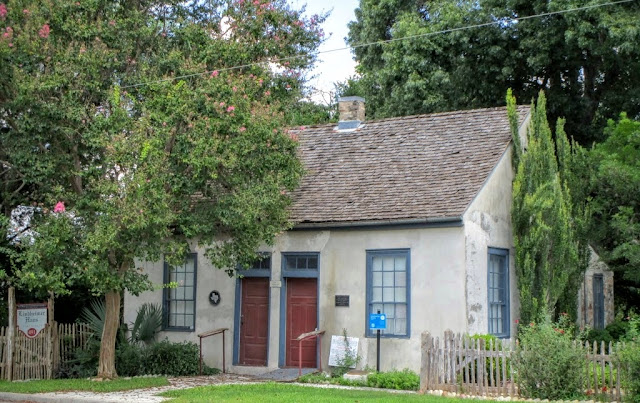 Inside we first toured the business side to see where he published his paper. 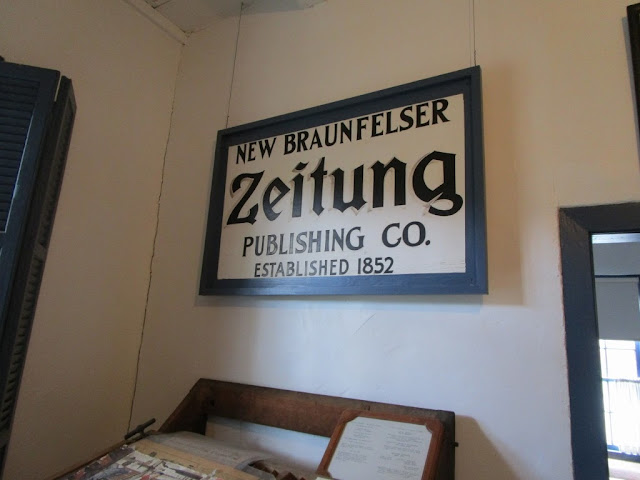 A second room showed his botanical work and the plants which now bear his name.  Guara lindheimeri (lower left) has become a popular garden plant around the world.  Vernonia lindheimeri (middle left) is one of my favorites. 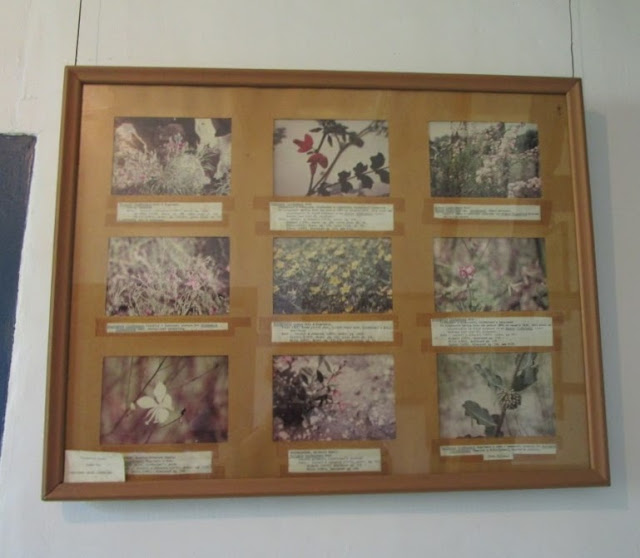 His preserved specimens and seeds were sent to collectors in Europe who would send money by return trip. 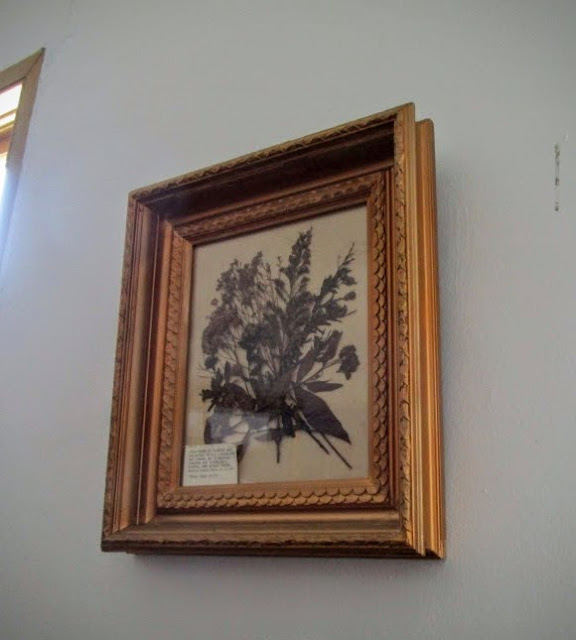 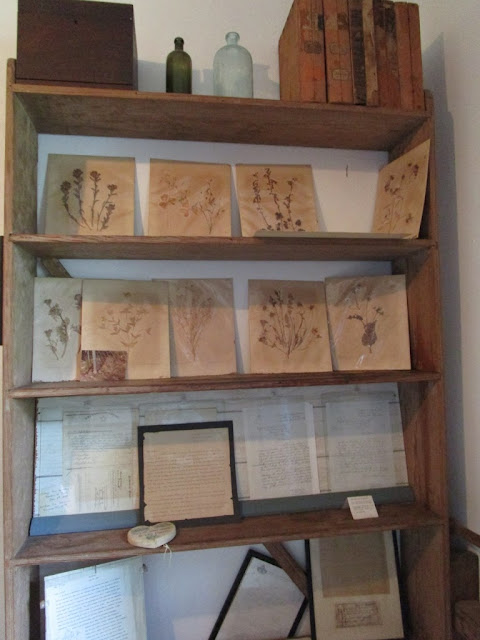 After touring the house it was into the back yard to take in a view of the house. 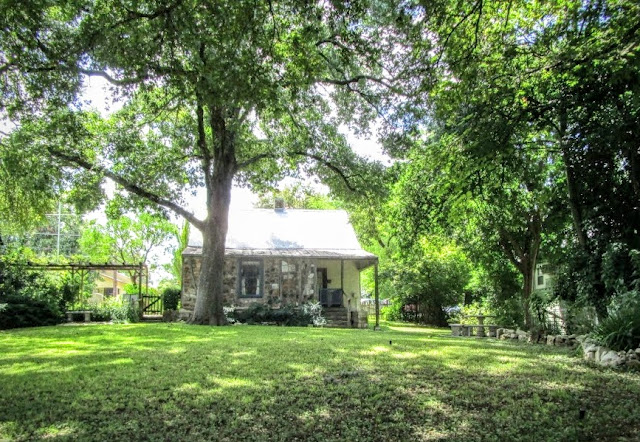 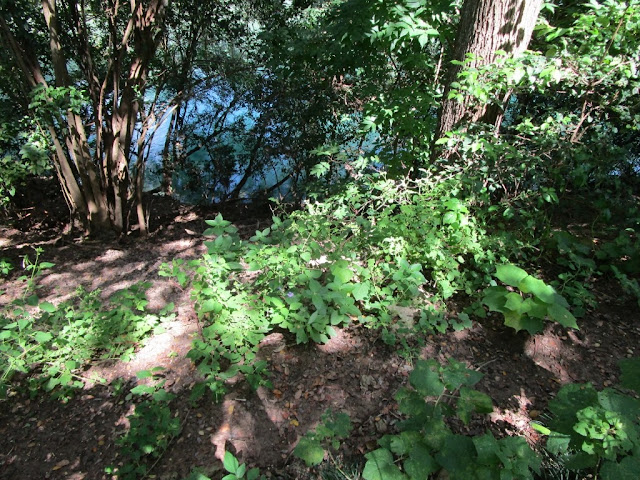 Tubing is a popular pastime and big business in New Braunfels. 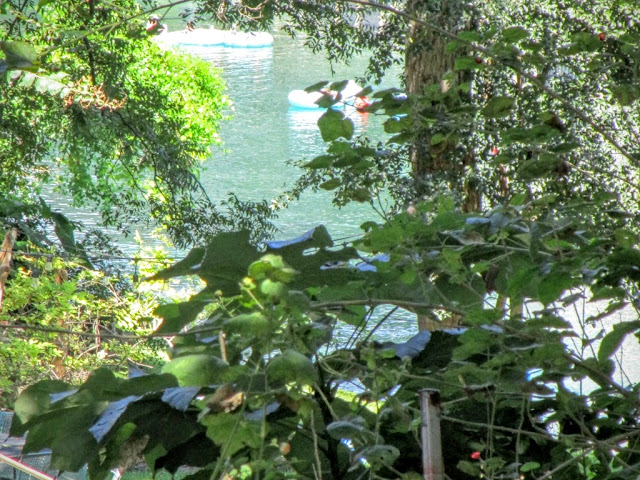 Fachwerk timber  structure infilled with stone at the back of the house is Texas-German 19th century construction.  The front of the house is constructed the same but was stuccoed over as was typical of the time. 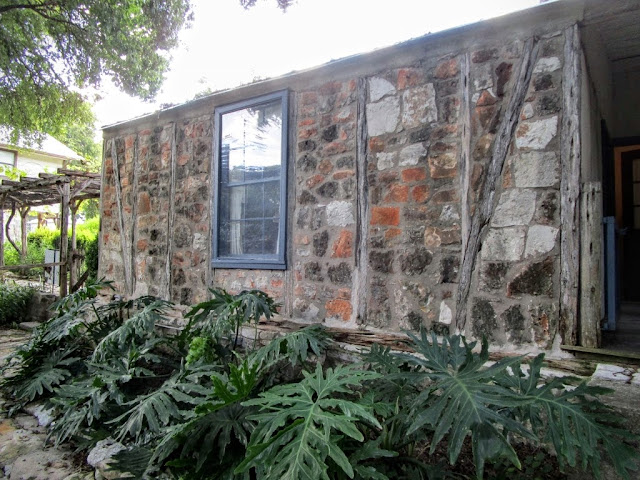 Then it was into the garden maintained by Comal Master Gardeners and a great view of that saltbox style.  Love the trim color, a pretty blue-gray.  It's not clear from the website that he had a garden but I found it a nice option to visit an adjacent garden filled with plants he would have encountered in his studies.  Will Fleming Yaupons show well against the house though they are a recently discovered cultivar of our native yaupon hollies. 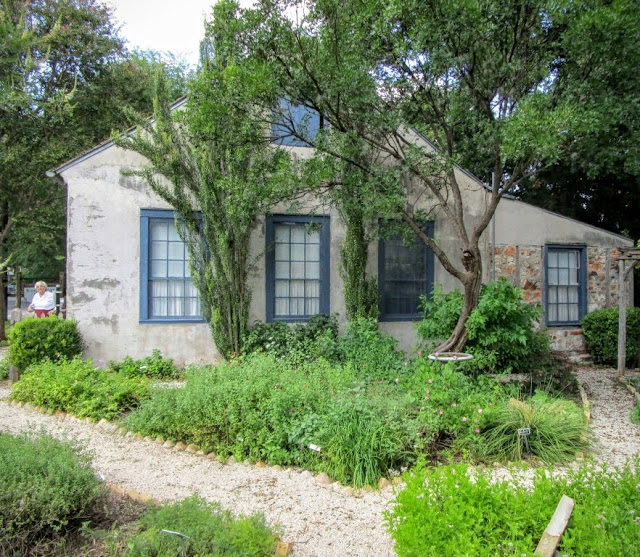 The house next door is modern but its vernacular styling doesn't distract from the garden. 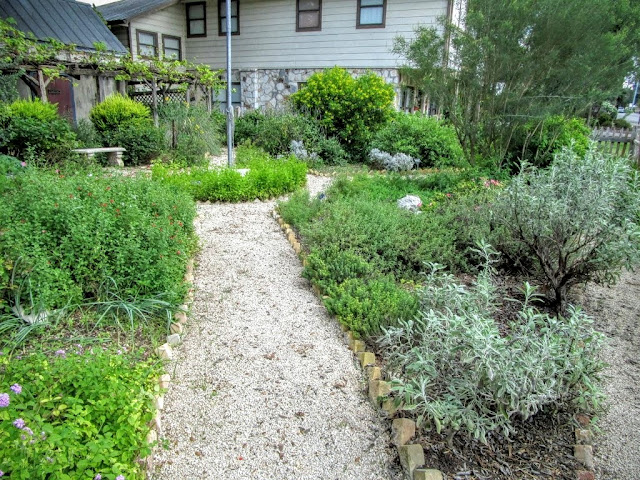 How nice to live next door with a view of this garden. 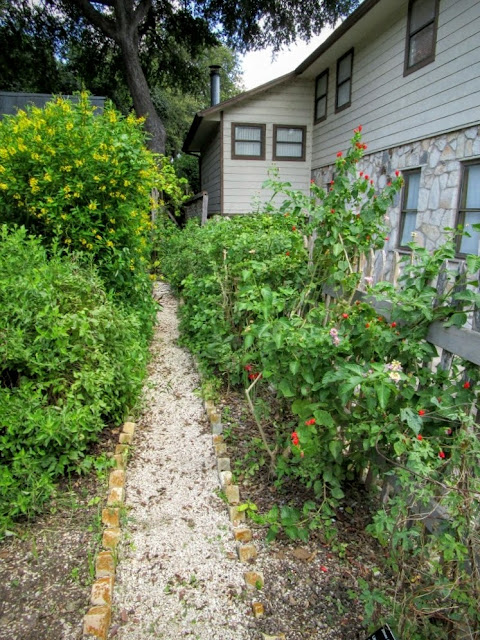 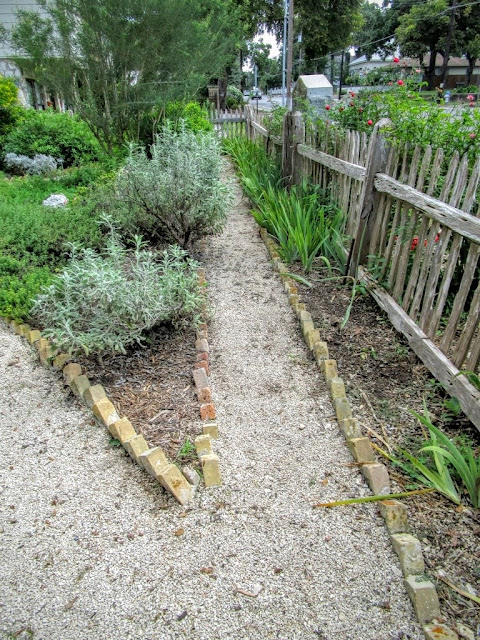 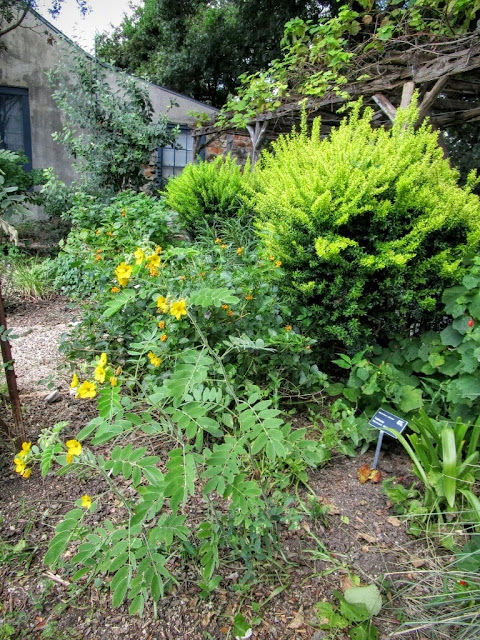 I think this is Lindheimer's Silk Tassel. 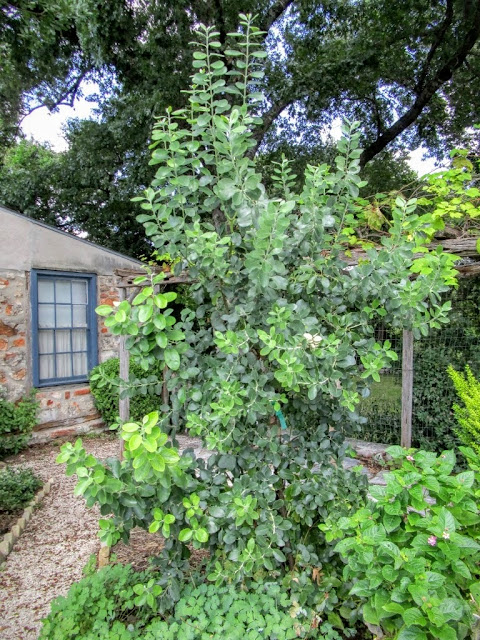 Not all the plants are named for Lindheimer.  Rock Rose and Turk's Cap are native plants which are well adapted to our gardens. 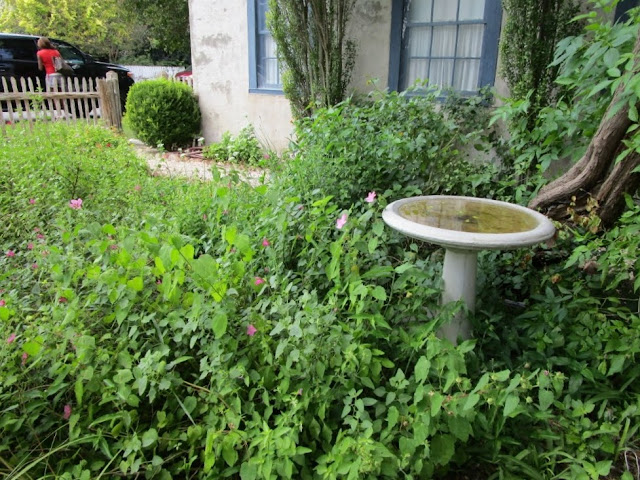 Most plants are labeled.  This is Texas Star. 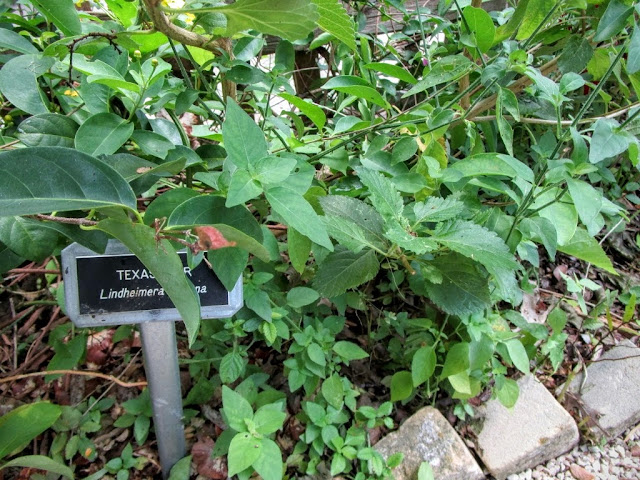 Everybody's favorite Oxblood lilies just happened to be in bloom.     I planted some against my house a few years ago and would love to see them grow this well. 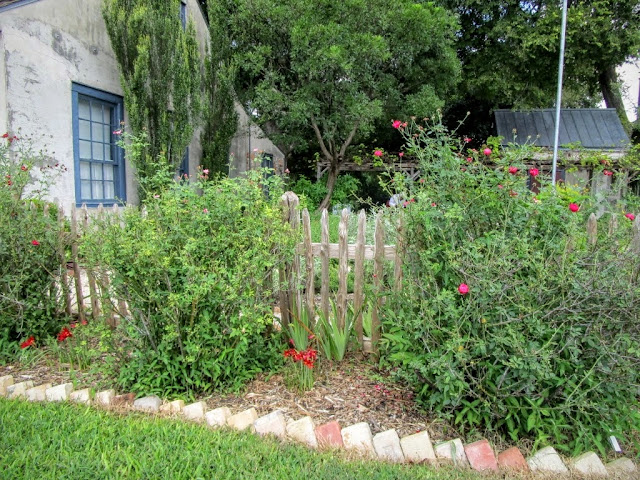 "Schoolhouse Lilies", as they are also called, were passed around early Central Texas gardens in abundance. 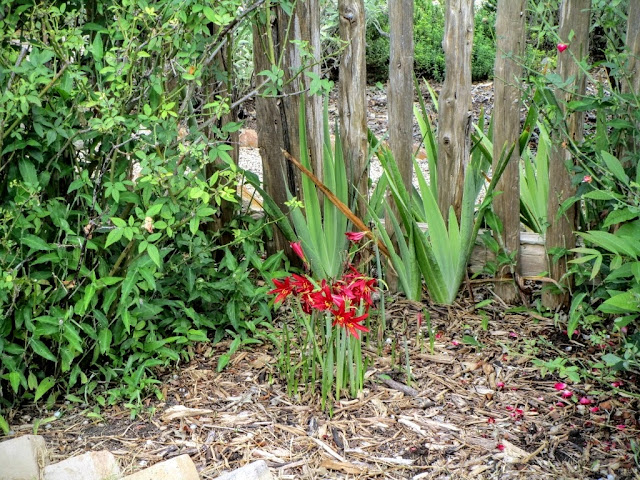 Another look at that great roof line. 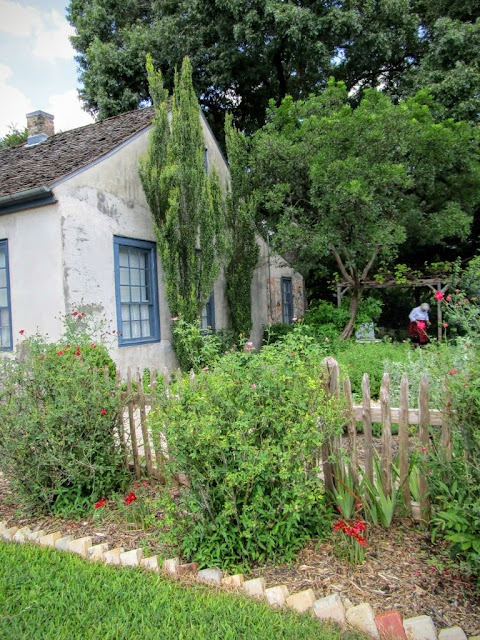 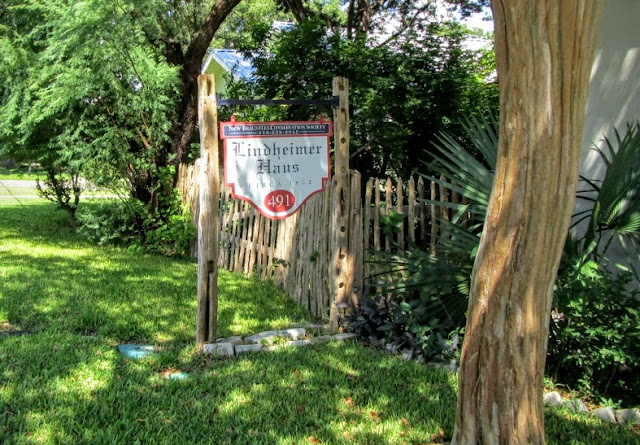 Information on visiting the Lindheimer Haus and garden along with many other buildings in this historic part of Texas is available on The New Braunfels Conservation Society website.
Posted by Shirley Fox at 4:13 PM