Rock Planter in One Hour

Rock planters are quite common in nurseries and shops around my area and I often think I'd like to have one but decided we could make one ourselves.  So when Neal showed me a rock from our rock pile and offered to give it a go I was all for the idea. 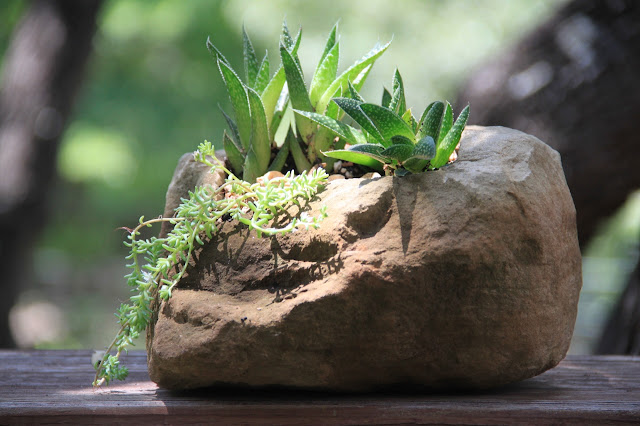 And it was completed in just under an hour!


I documented the process.  Let's get started shall we?  First is selecting the rock.  Finding a rock is always easy for us as we live on a limestone ledge.  Finding the right rock is a little more challenging.  It should be soft enough to cut and drill easily, which makes a soft sandstone the preferred choice.  This sandstone  rock was left over from a project and is softer than our native limestone.  It also looks interesting which makes it a good choice.  Sort of squarish, but not exactly. 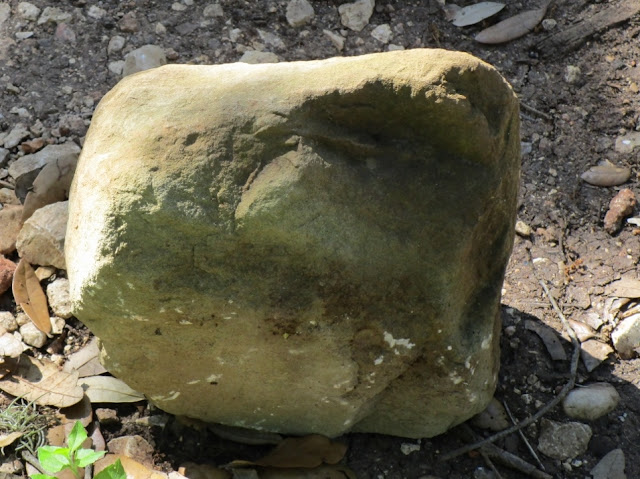 Mark out the opening for the planter.  I made sure that sloping corner on the lower right would be part of the design. 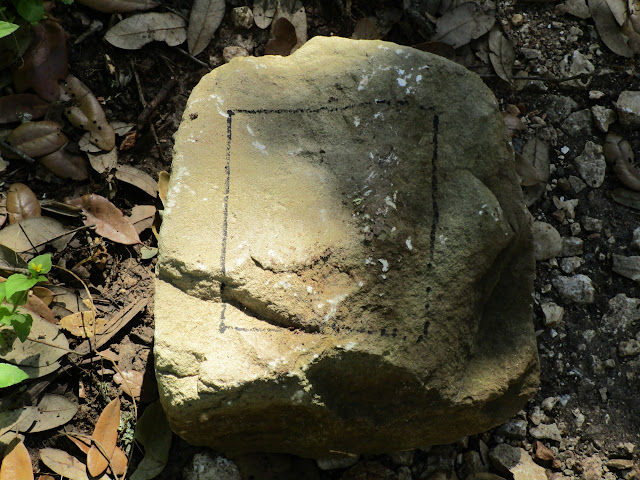 Bring out the power tools.  Circular saw with masonry blade, grinder (steel cutter blade was all we had), chisel, hammer. 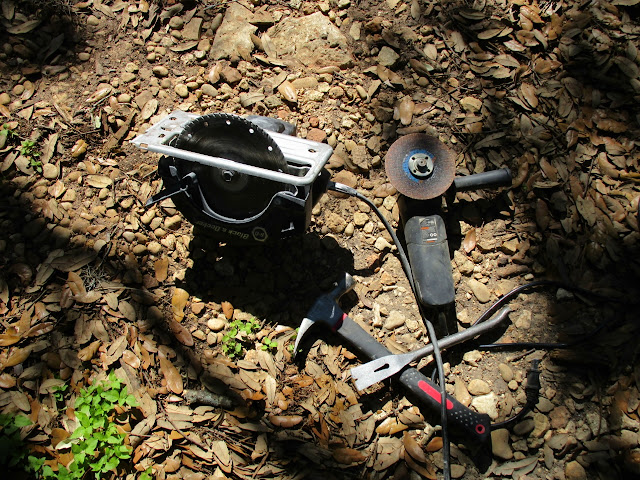 Circular saw makes the first cuts in the top.  Or you can just use the grinder.  Stop cutting short of the end of the lines to avoid overcuts. 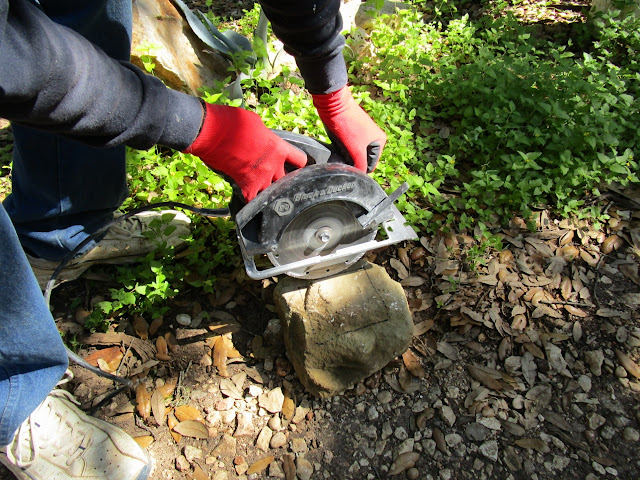 Then cut more slots in between.  Sort of like this though you could use your own pattern. 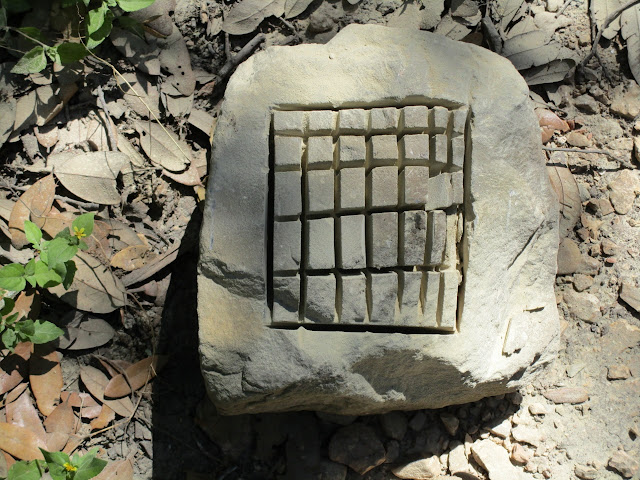 Make sure it's a cross hatch of some type because the next step is to chip out the pieces with the chisel.  Go light with the hammer to avoid breaking out the sides. 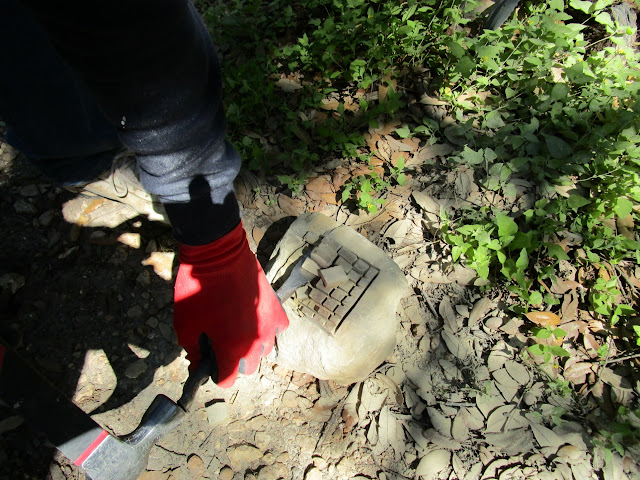 The first layer is done. 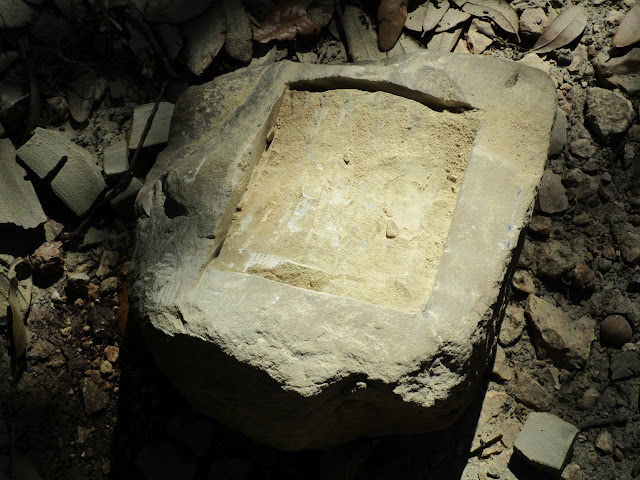 The circular saw gets too big to fit down in now so he switched to the grinder for the next row. 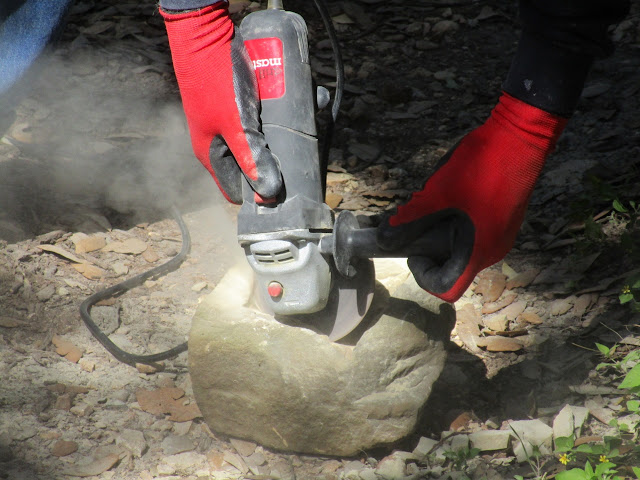 Criss-crosses this time to get the blade down deeper in the middle. 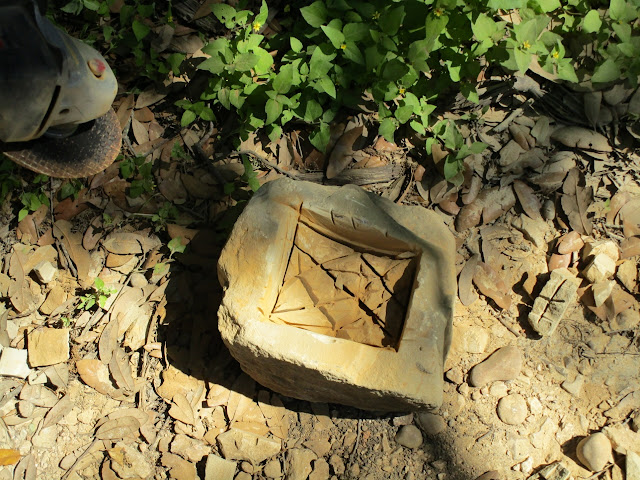 Grinding cuts deeper into the stone 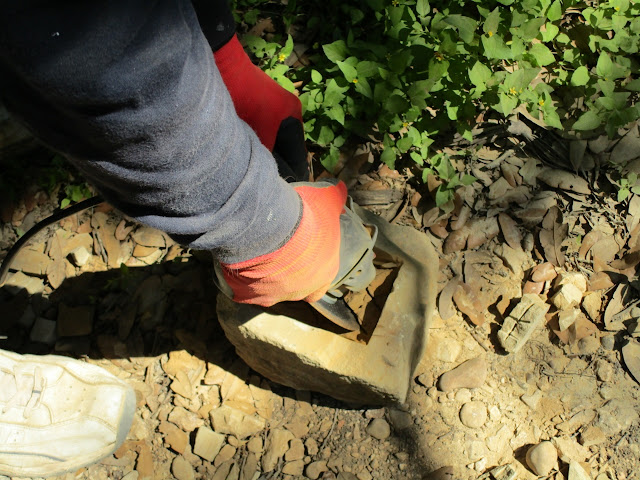 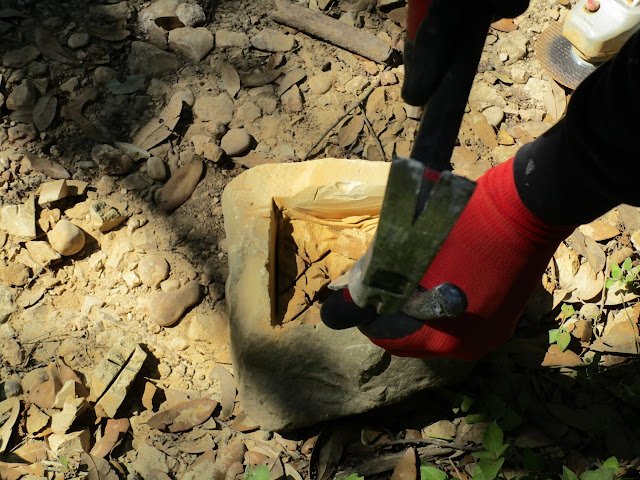 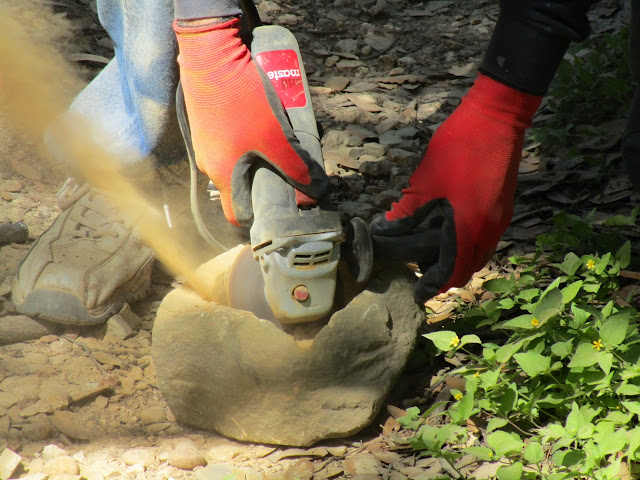 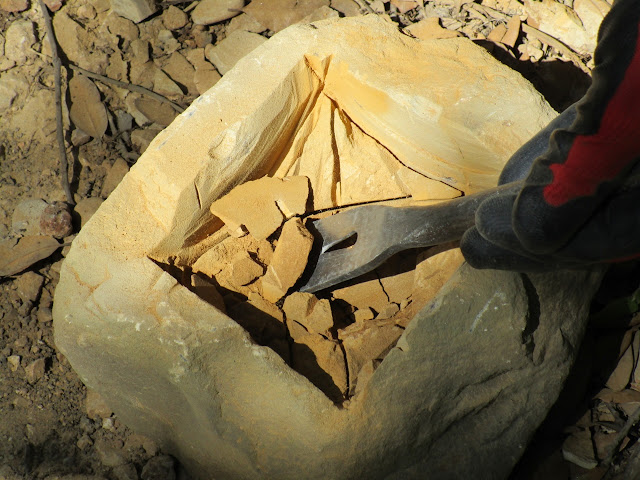 Keep at it until the opening is deep enough to plant, at least three inches.  Then grind off any over-cuts along the top edges. 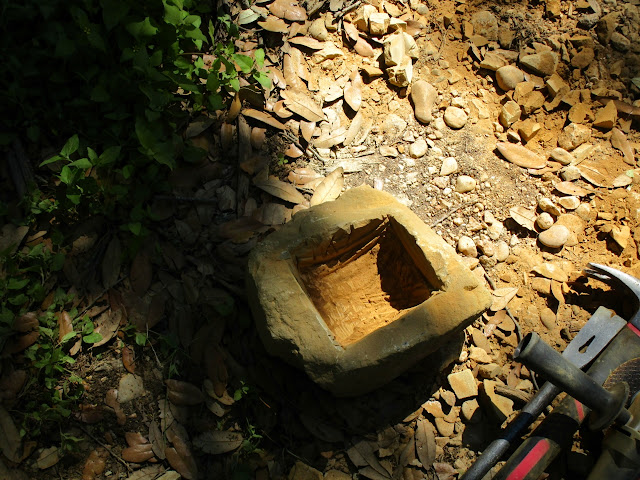 Looks a little rough inside and you could try to smooth it out with a Dremel. 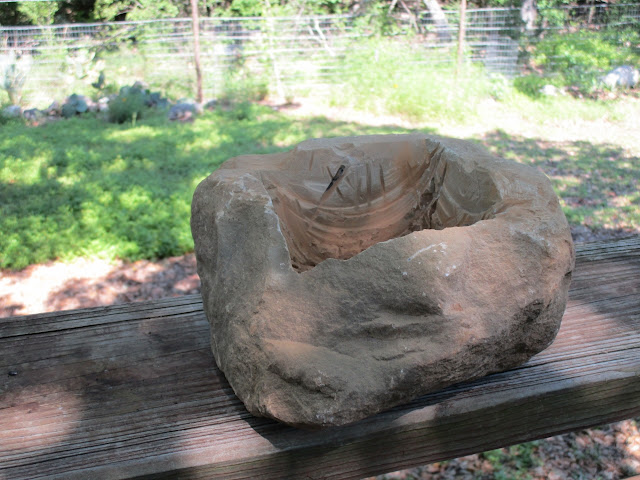 I decided not to worry about that part since the soil and plants should cover most of it. 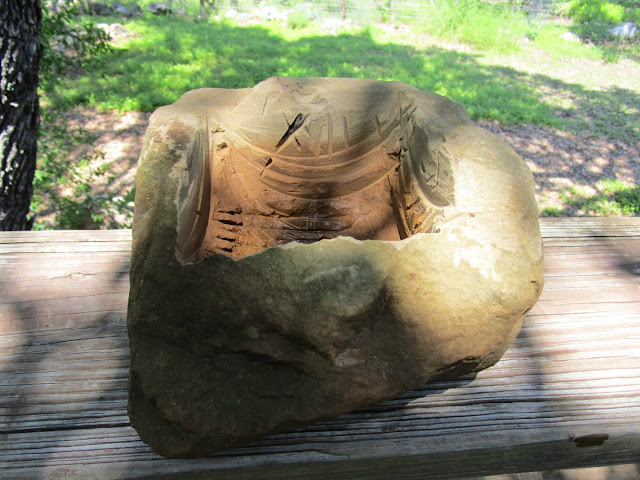 Drill a hole in the bottom with approximately 1/2 inch masonry bit. 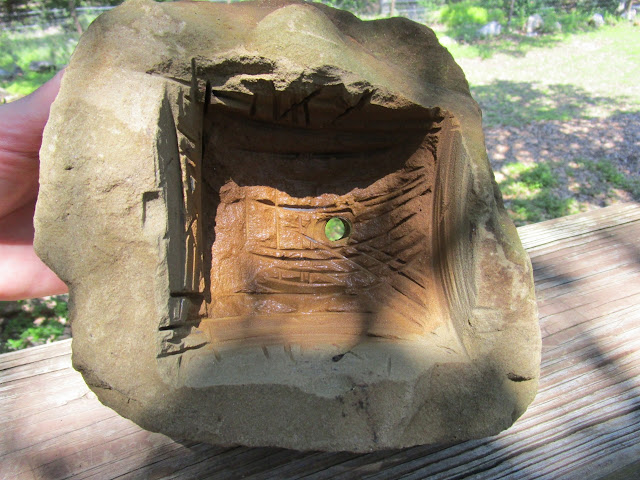 And plant it up. 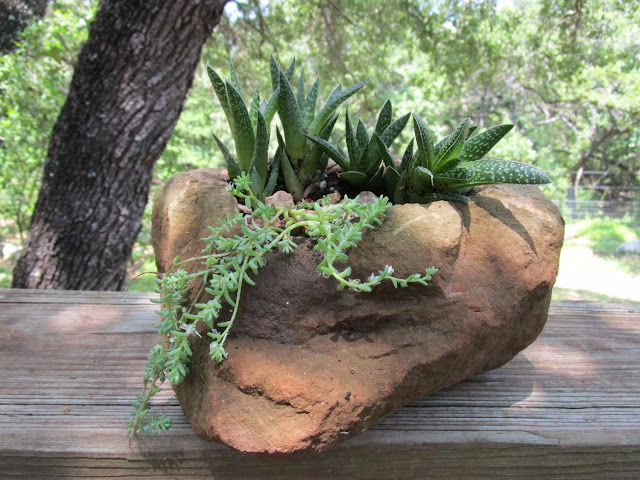 Yay, a fun learning experience and another project done!  See, I could make that!
Posted by Shirley Fox at 3:19 PM