From Rain to Drain: Touring the San Antonio Water System

San Antonio annual rainfall cannot support a city of our size, so where does our water come from?  We are situated on the South Texas Plains near the Chihuahuan Desert and at best have a semi-arid climate, putting water at a premium.  We get most of our water from a surprisingly large underground source known as the Edwards Aquifer which has been described as one of the worlds great natural resources, and our city could not exist without it.  I was intrigued enough last fall to join about 40 interested residents, including engineering students from a local university, at the San Antonio Water System (SAWS) Conference Center to spend a day learning the story of our water system.  In my previous post I discussed a new study to quantify how much water our landscape plants really require.  In this post I'll share the fascinating process of how San Antonio water goes from rainfall to our homes and gardens, since it is a unique story.

After an introductory talk from our SAWS guides we were on our way by chartered coach to Stone Oak Park in far north San Antonio for the first stop on our tour and the answer to the first of our questions about the aquifer: how does water get into the underground aquifer?  Our guide invited us to explore Cub Cave in the park to see the first steps in the process. 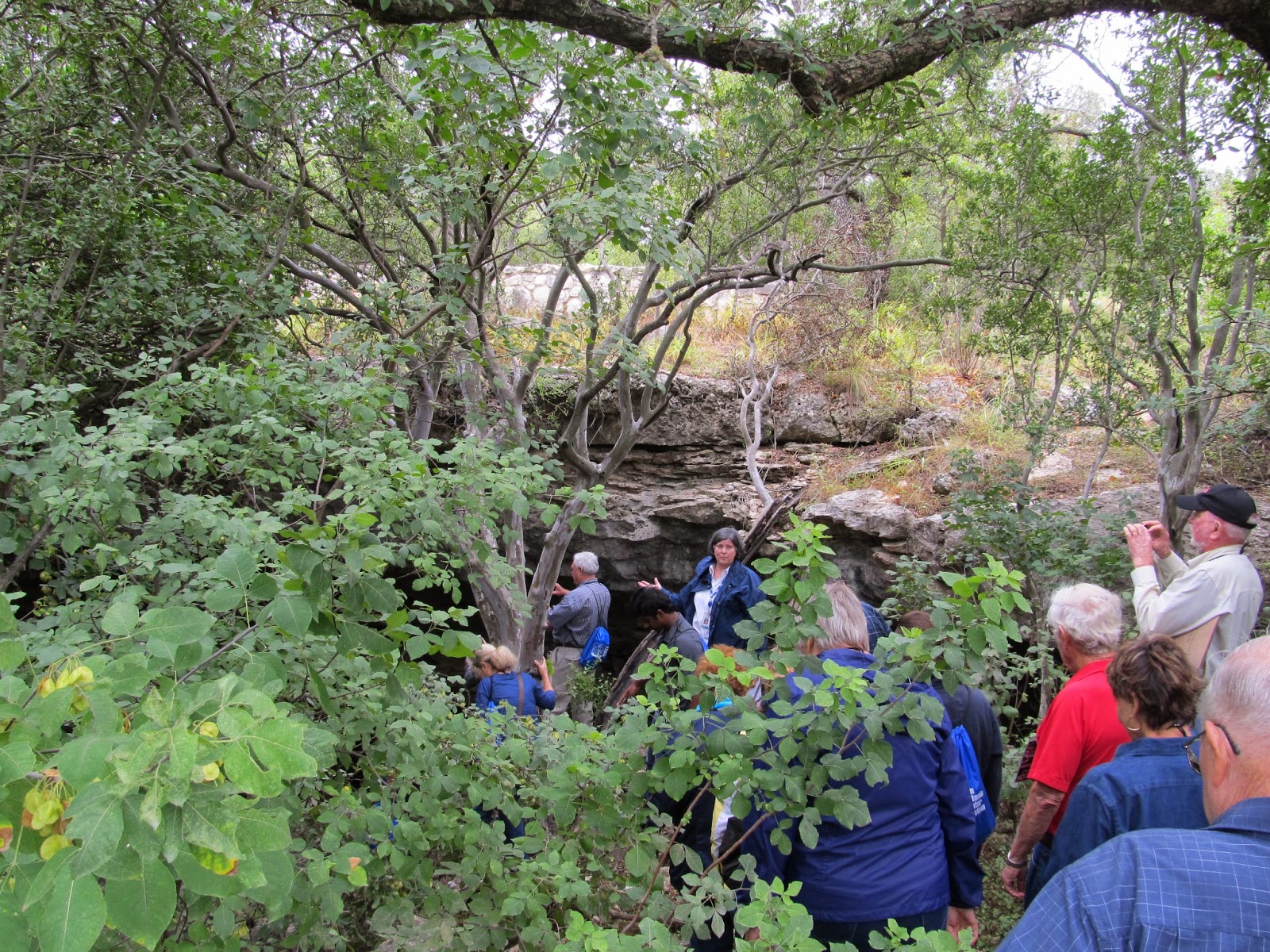 The Edwards Aquifer is fed by rain water and the resulting streams over the aquifer recharge zone.  This occurs along the 200 mile Balcones Fault Zone north of San Antonio, a network of innumerable open caves, pits, and cracks which allow water to flow into the karst rocks lying just beneath the surface. Karst rocks are akin to swiss cheese so water percolates slowly down into and through the rocks where it collects in underground caves where water is stored in the Artesian Zone.  So it is the unique east-west Balcones Fault Zone which fractured the earth's crust long ago in a way which opened the earth to collect water as it flows, rather than simply allowing it to run off down rivers and streams into the Gulf of Mexico.  If that happened there would be no city here because of our limited annual rainfall, most of which falls in large doses.

Stone Oak Park is part of this fault line "recharge zone" for the aquifer.  Rainwater flows into the bottom of caves such as this one and enters the aquifer through fissures and openings in the karst rock formations. 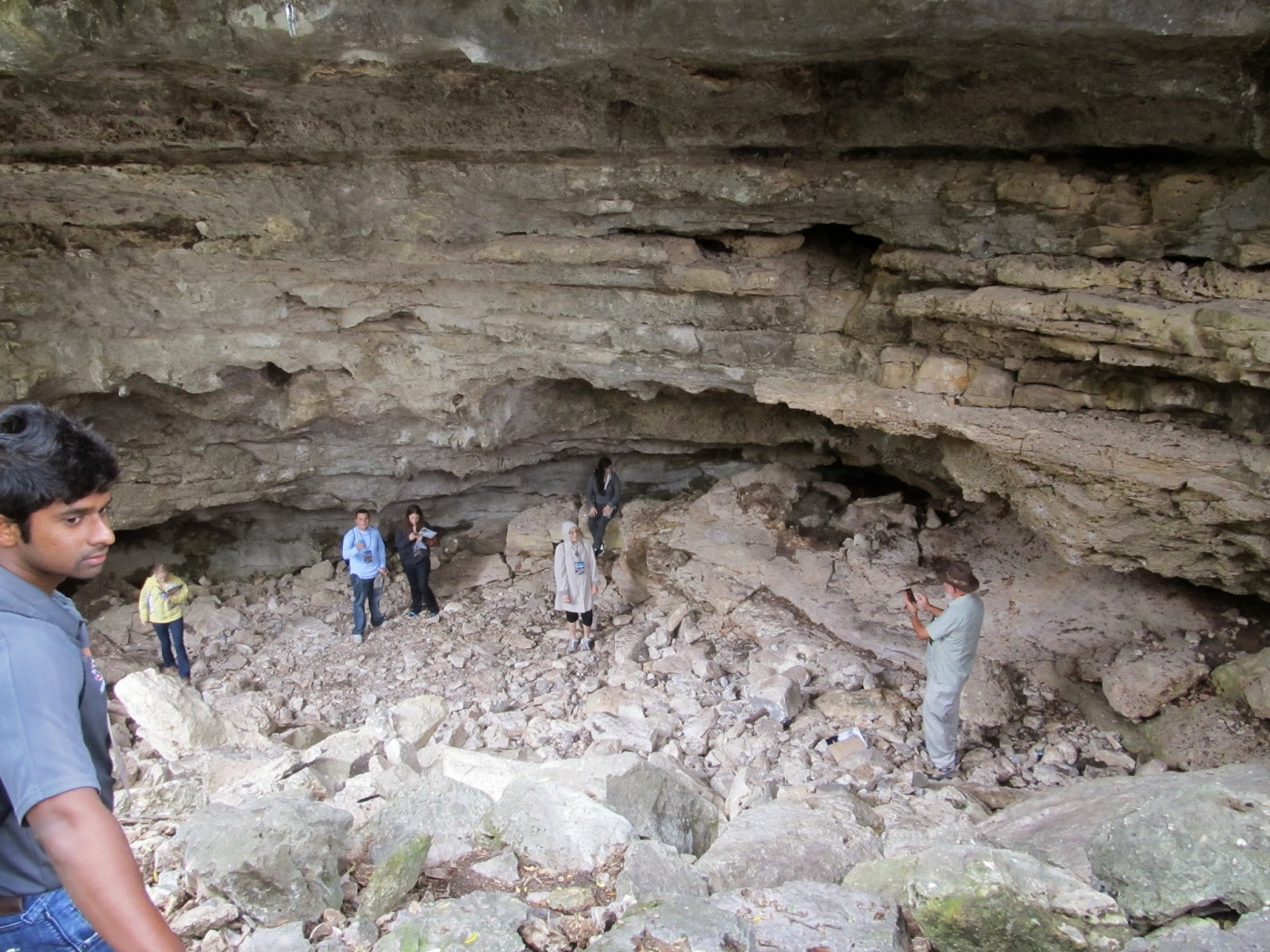 The Texas Hill Country is dotted with caves like this which I have fond memories of exploring as a child. 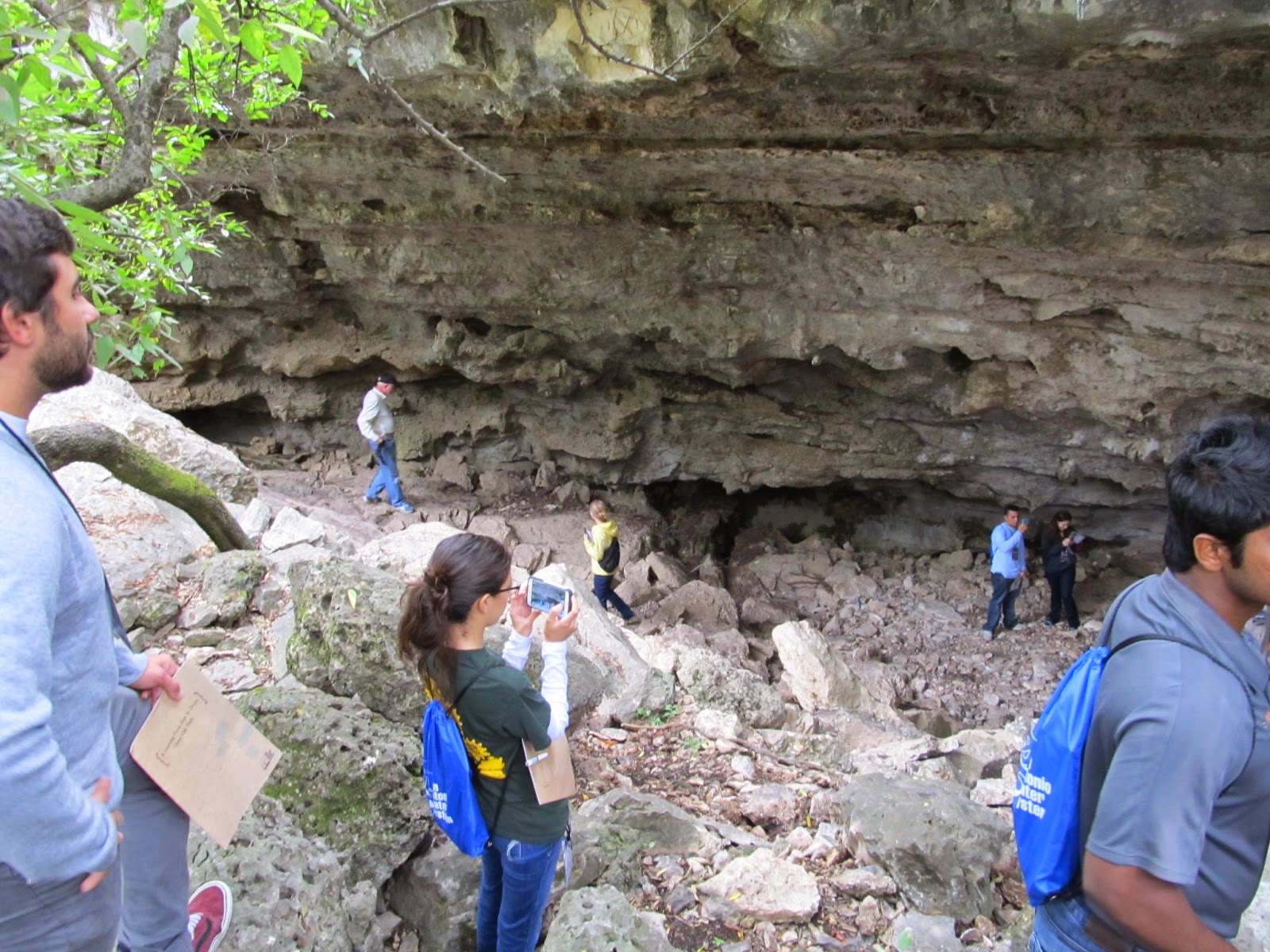 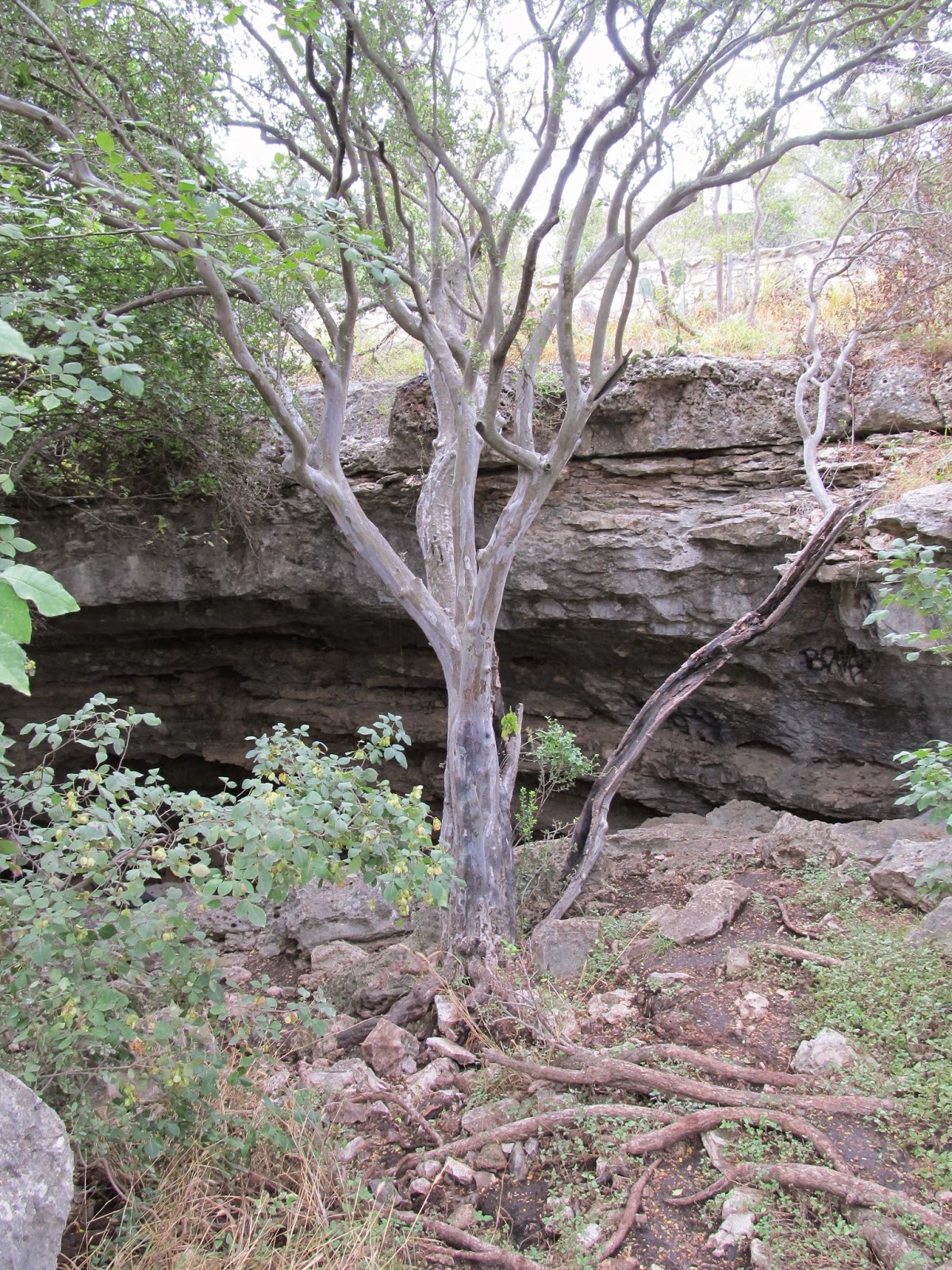 This creek bed is an example of the aquifer karst stones and fissures. 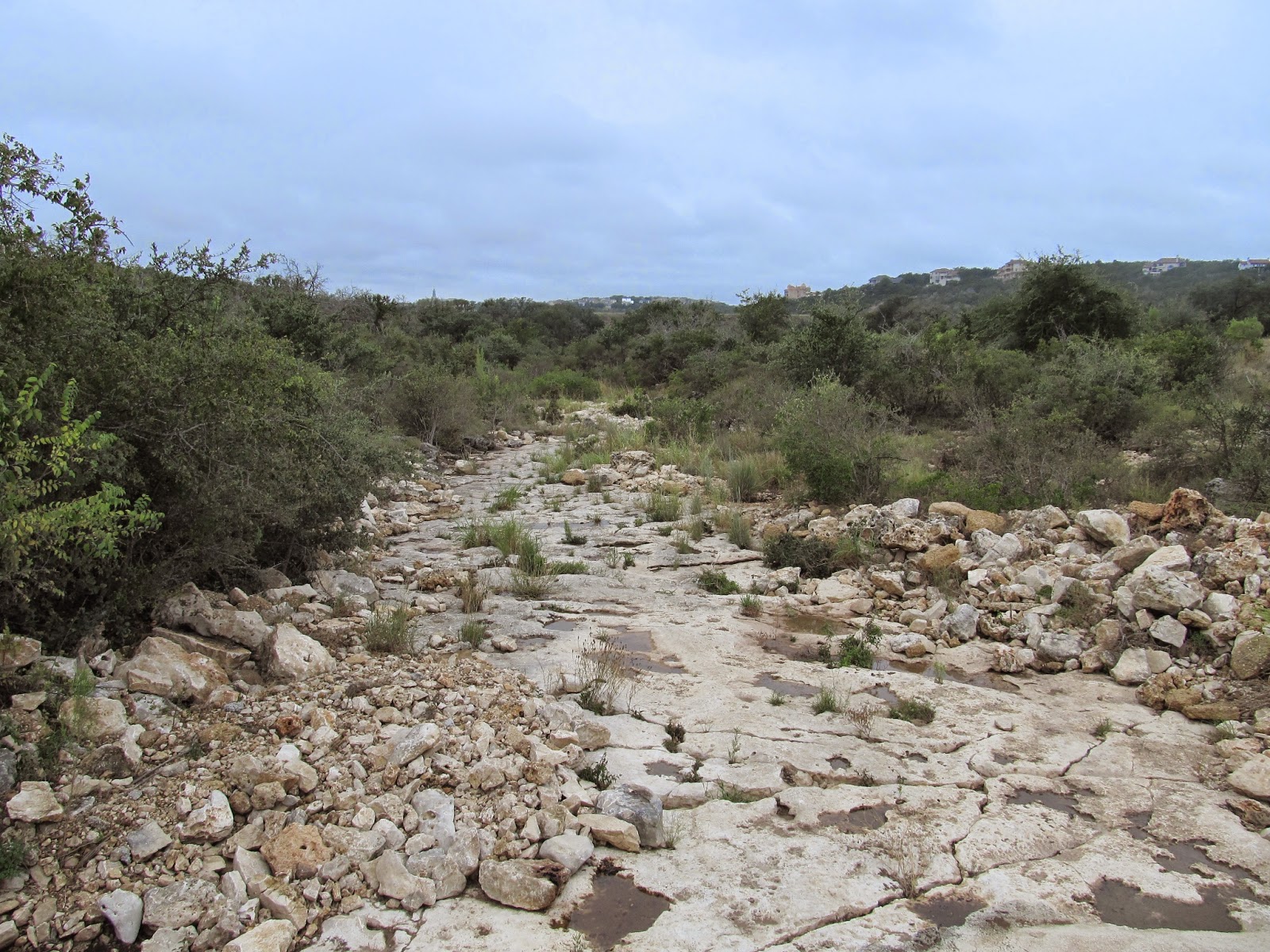 The aquifer is not an underground lake as is often described but rather is more like these piles of rocks under the surface. 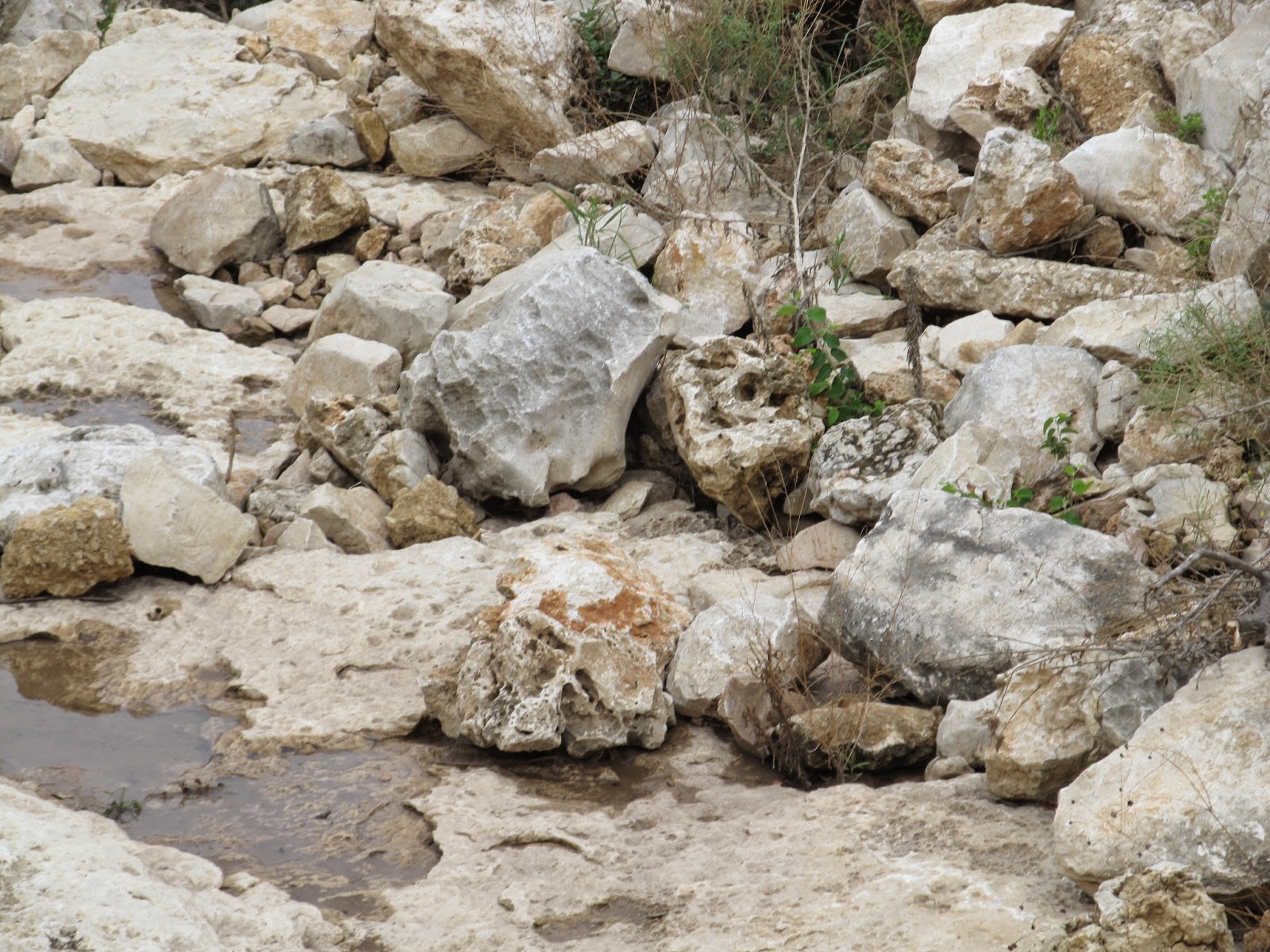 Karst stones showing holes where the water percolates through. 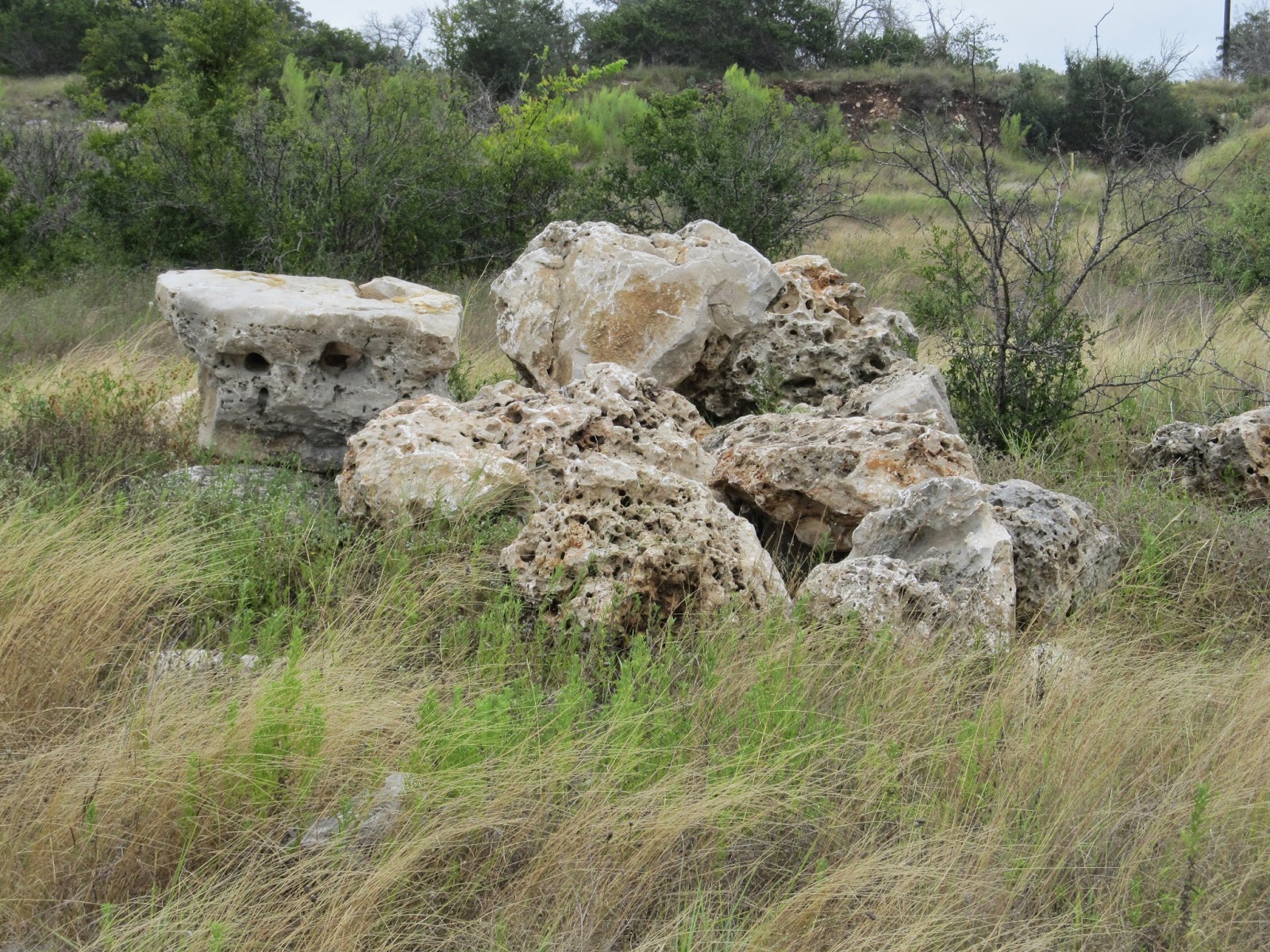 Bear Cave was another stop in the park.  It doesn't look like much of a cave with the debris screen. 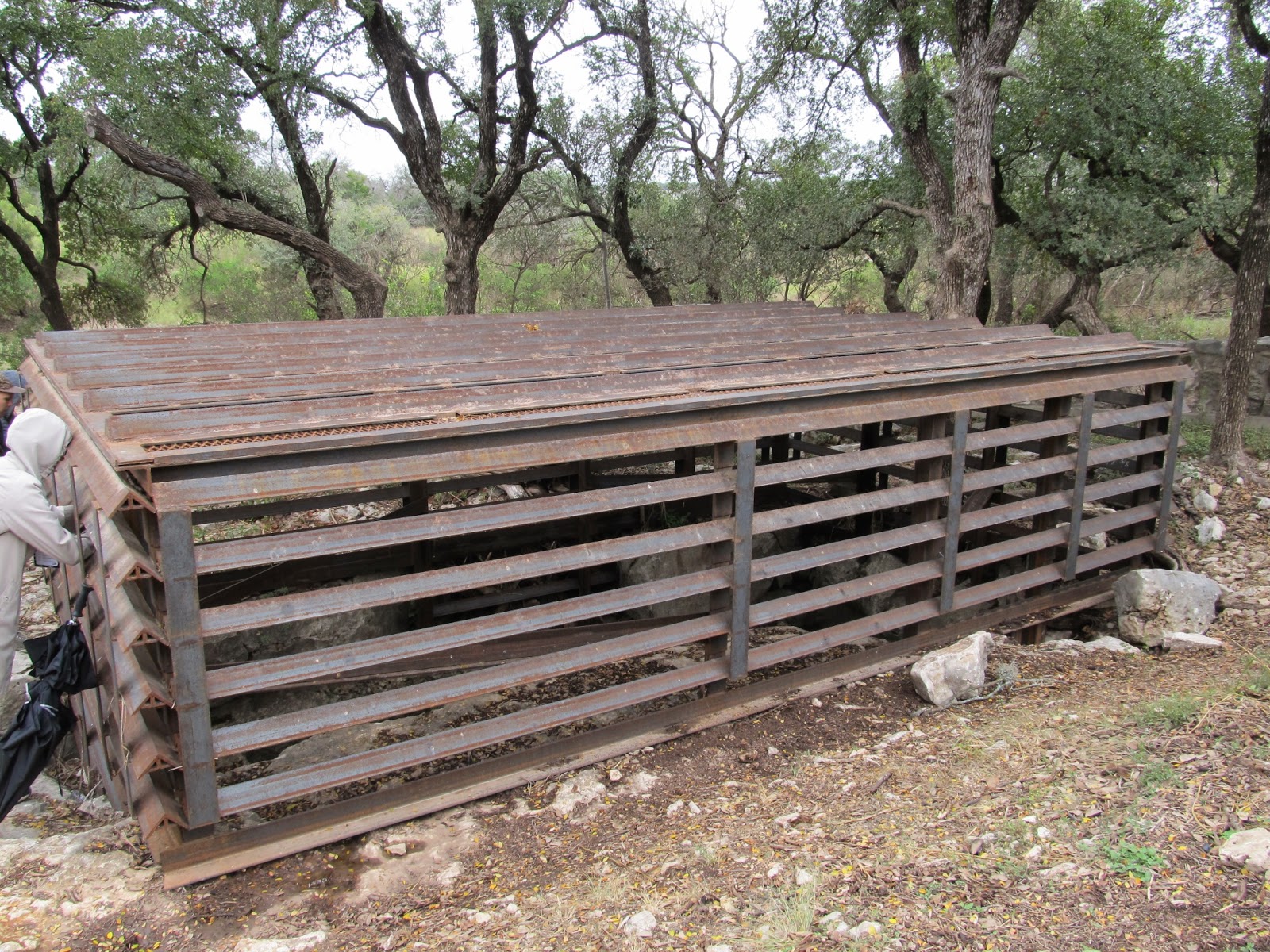 A better look at the cave opening shows why the screen is needed in this neighborhood park.  We were shown photos of huge amounts of water pouring through here during major rain events. 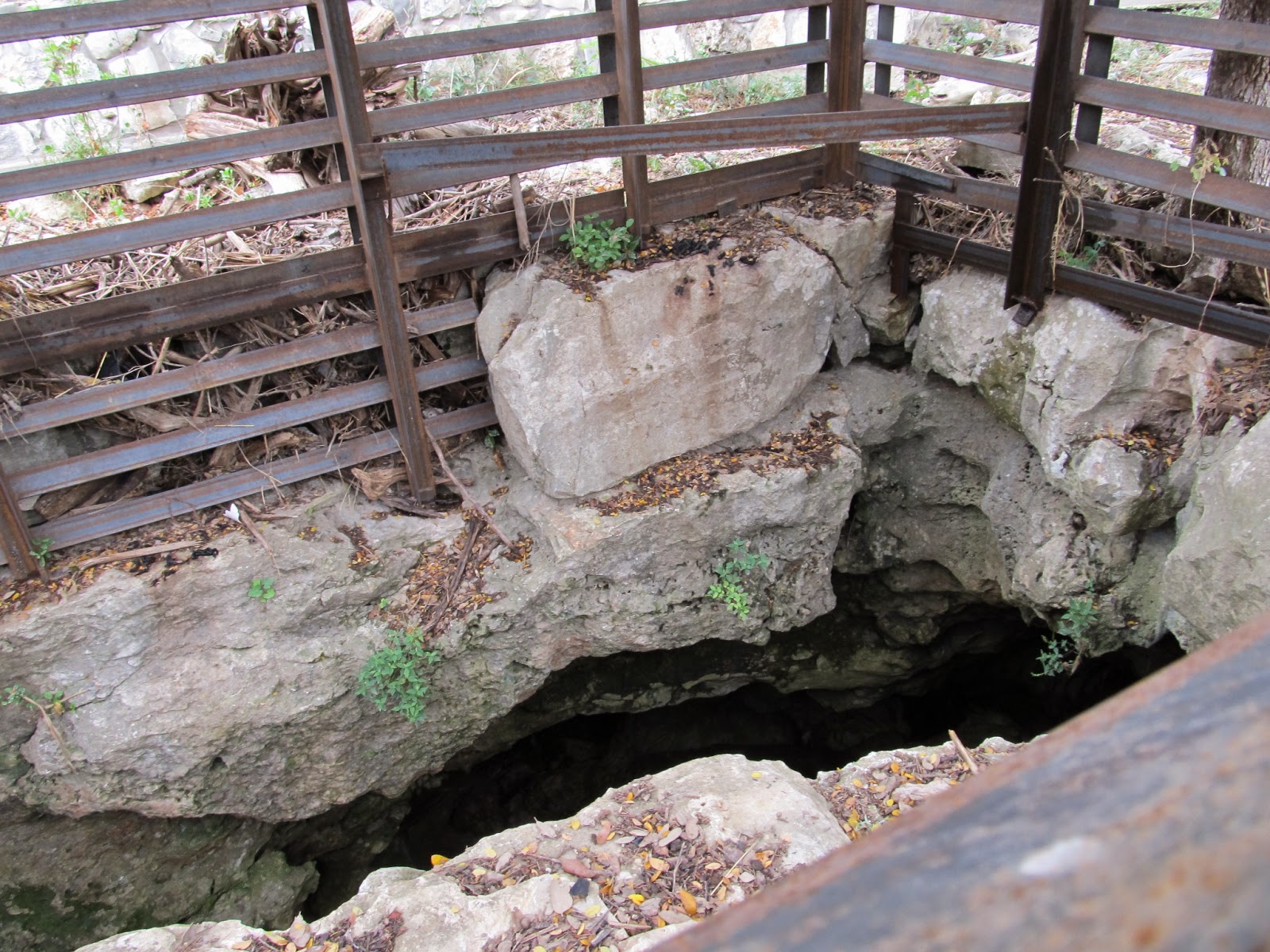 A few views of the park before we head to our next stop. 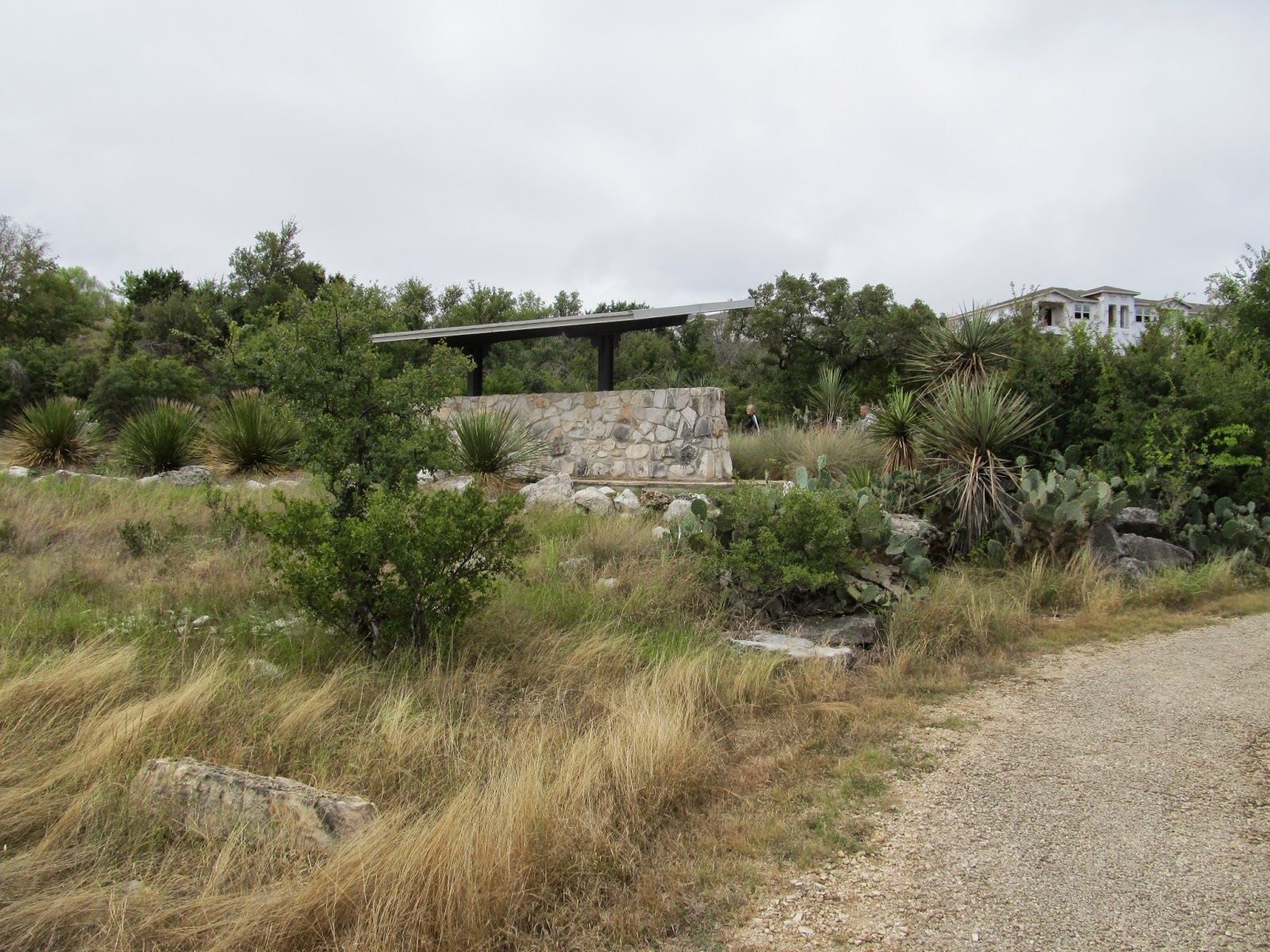 Jimsonweed or native Datura blooming in an open area of the park.  Loved seeing this as no one waters this plant and we had a very dry spring and summer last year.  Just look at that plant go! 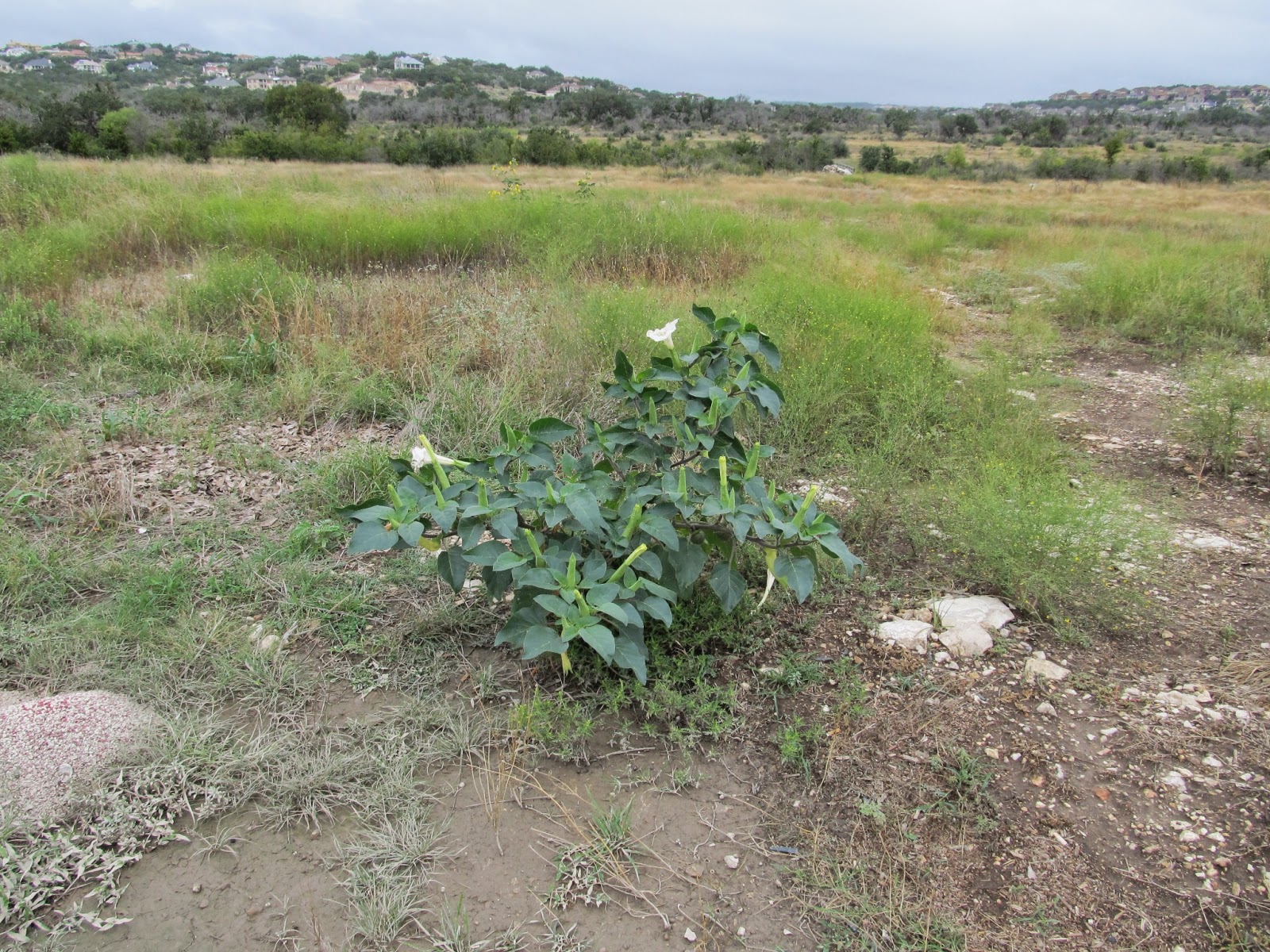 More native blooming plants show how the native plants are returning with restoration of the parkland. 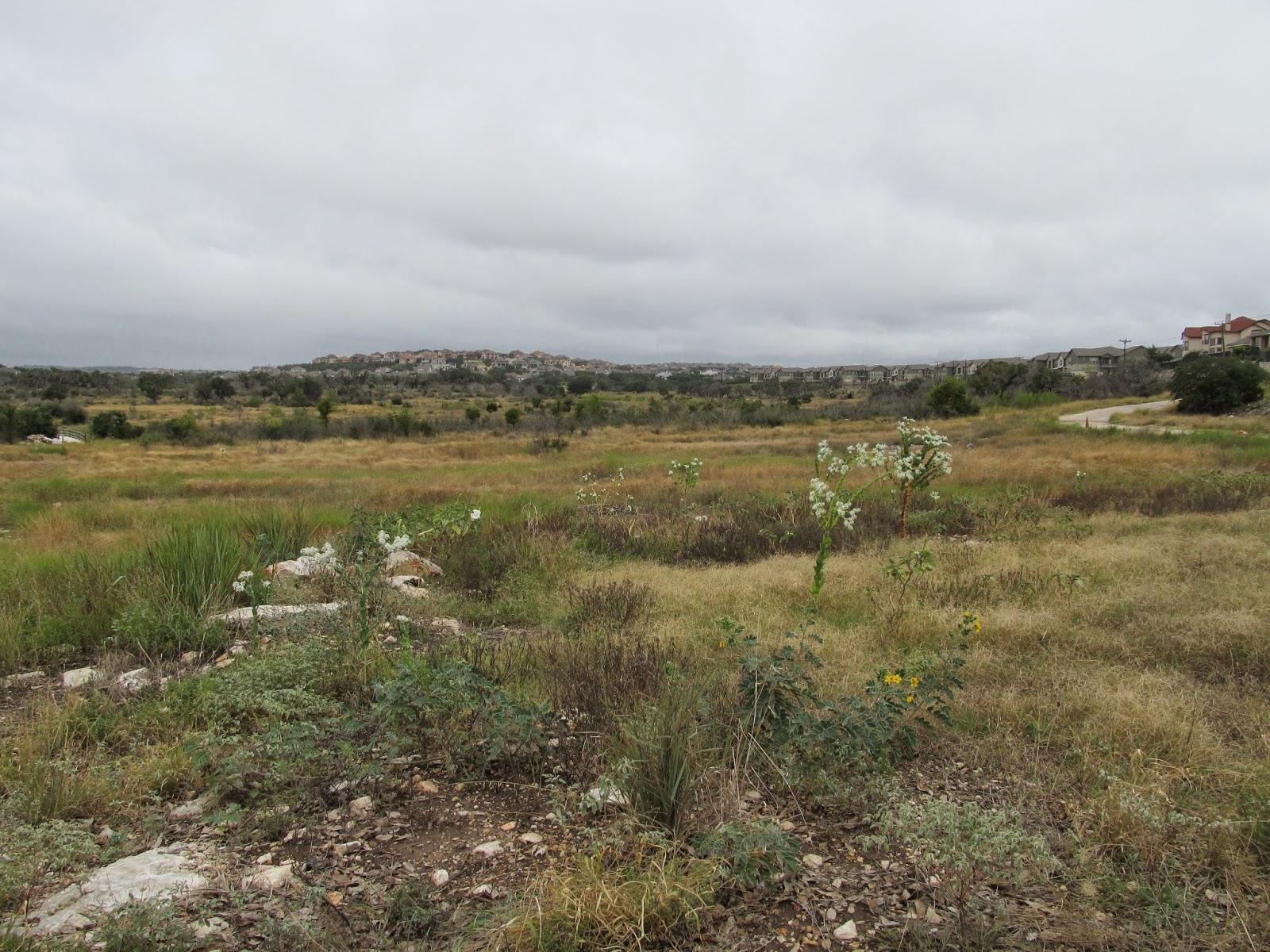 The next stop a pumping and storage station over the artesian zone near the airport.   The Edwards Aquifer has three zones, the drainage zone, the recharge zone (visted above), and the artesian zone. 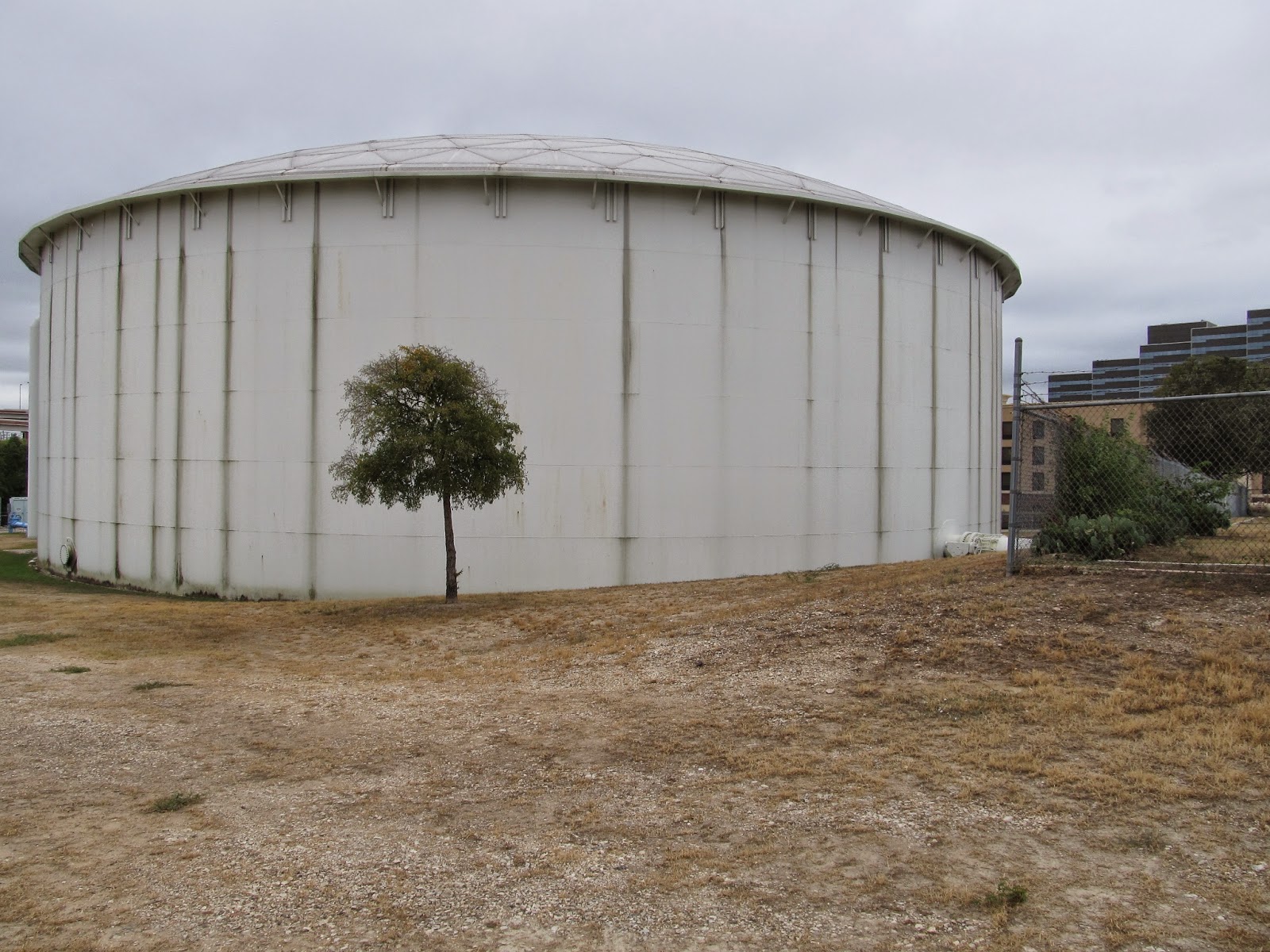 Pumps such as this one pull water out of one of the largest artesian zones in the world. 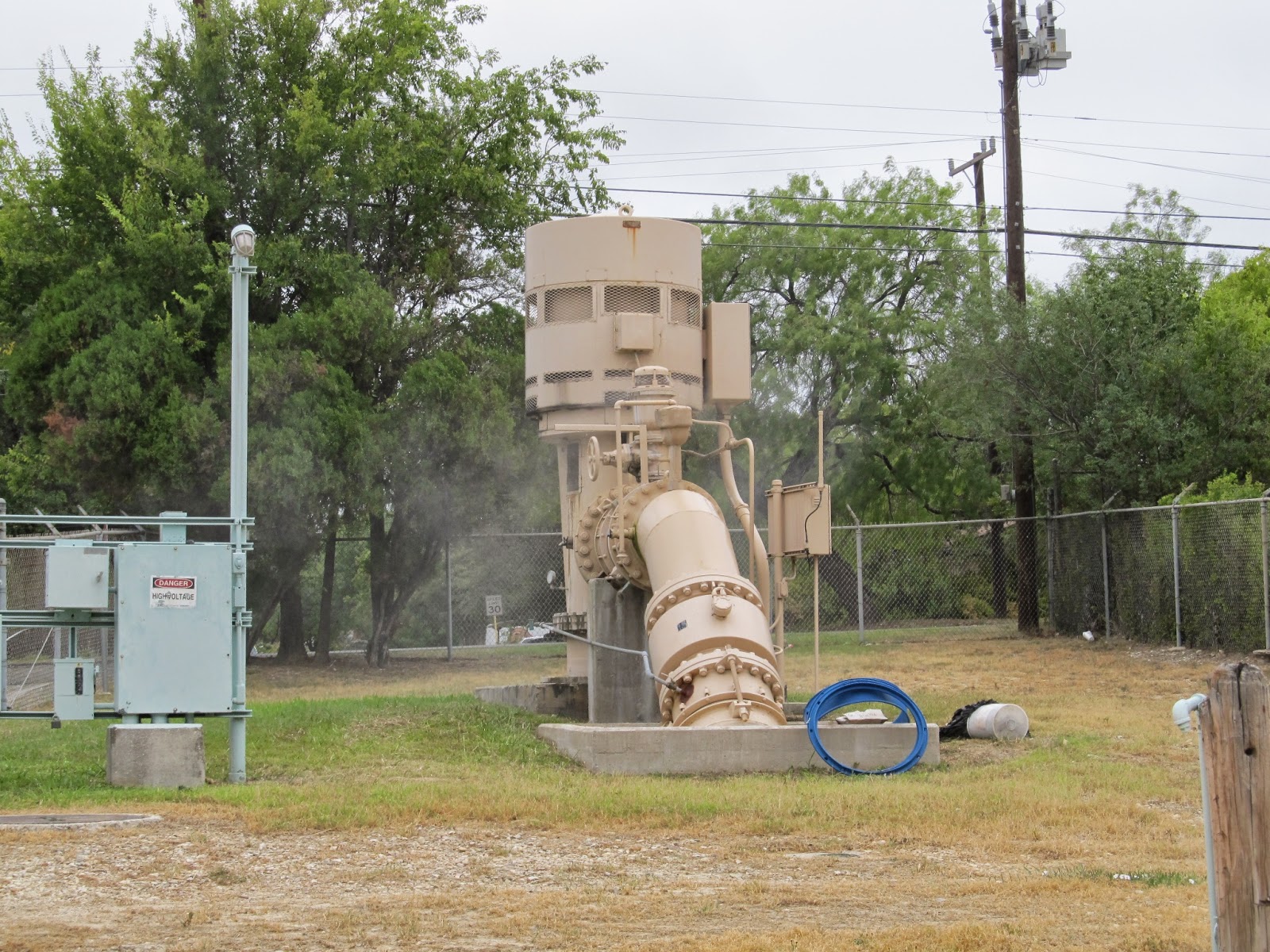 Aquifer water is so pure it does not require treatment other than fluoridation and chlorination (to prevent bacteria) before being pumped out to our homes.  The control panel is the only water treatment "plant" necessary for our region. 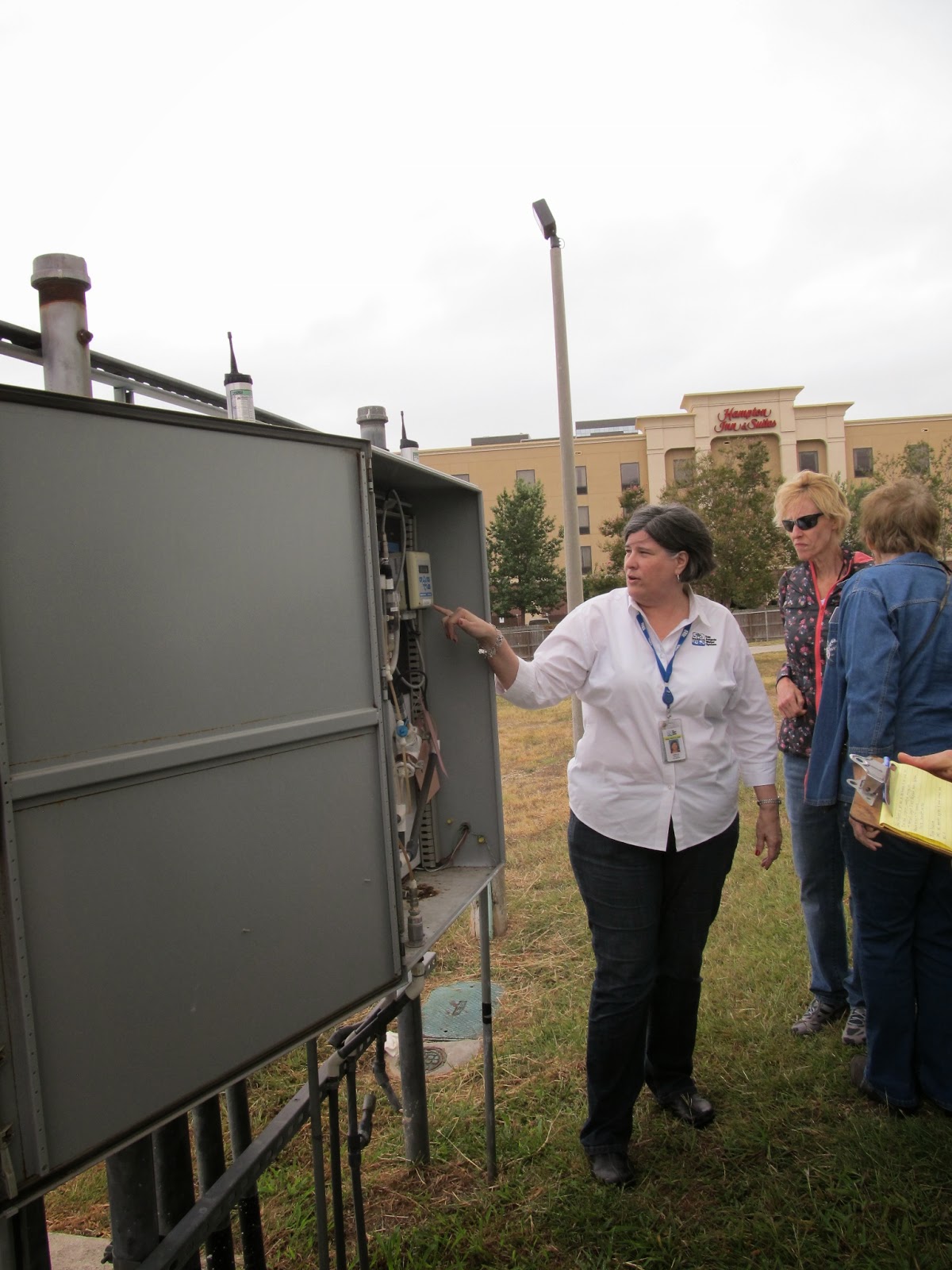 Although treatment is minimal it does require a series of pipes. 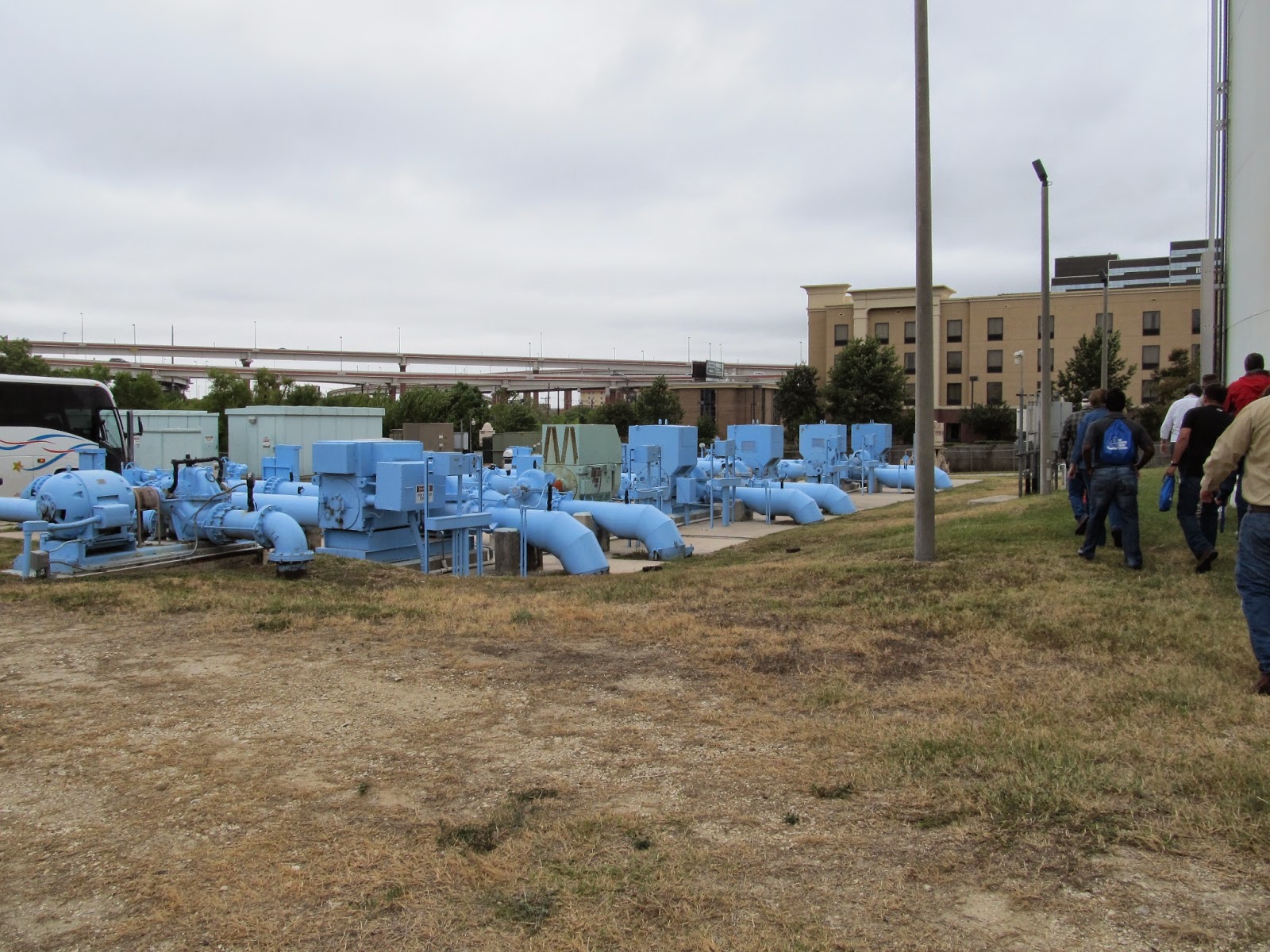 We were invited to sample water directly from the big tank! 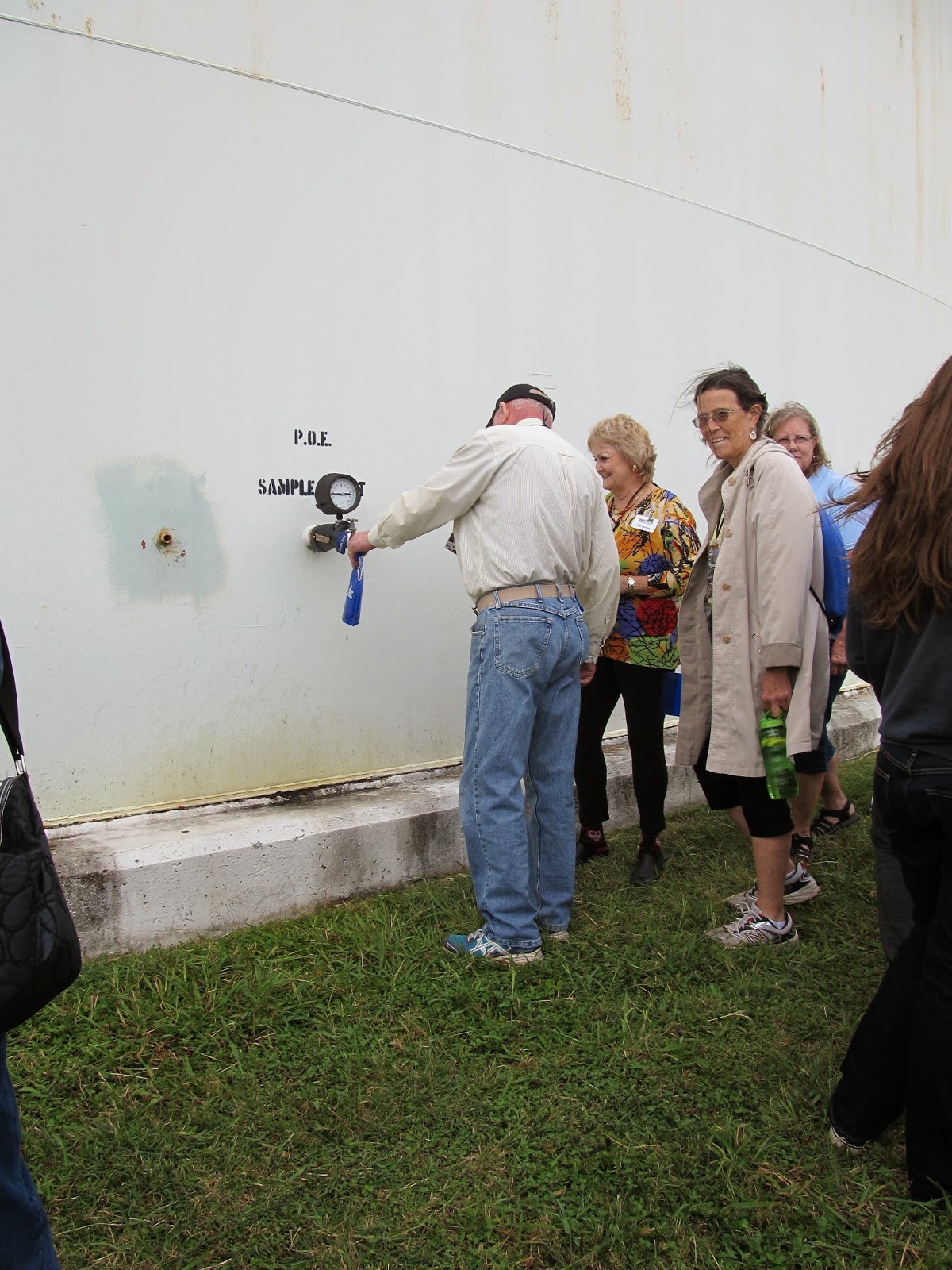 After lunch we toured the Dos Rios water recycling plant which uses a series of screens and ponds to remove solids and pollutants from the water.  The first step is to screen out debris through a series of progressively finer screens.  This was an unpleasant yet necessary part of the tour 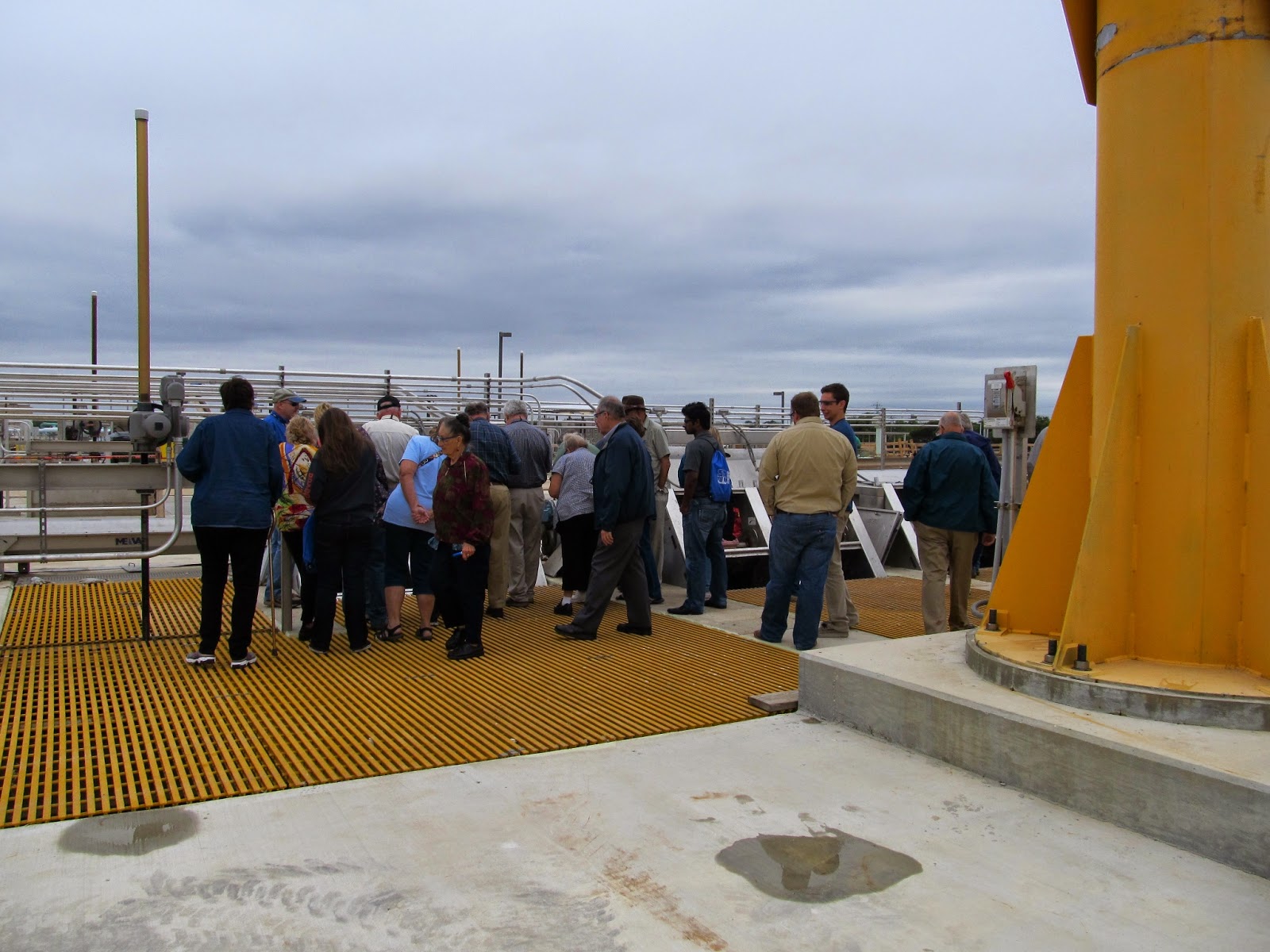 The biosolids are composted and sold to consumers by local companies like New Earth.  This photo shows the compost ready to ship out. 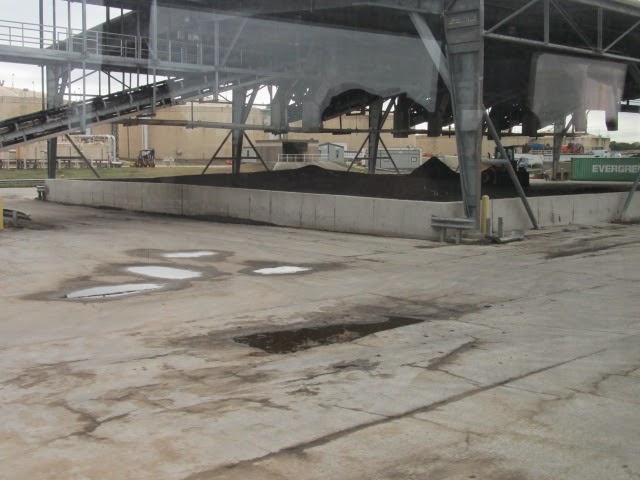 Once the debris is removed the water proceeds through a series of ponds where bacteria consumes organic matter.  Methane gas generated by the treatment process is sold as biofuel, one of the first such facilities in the country.  The green plant on the surface is duckweed. 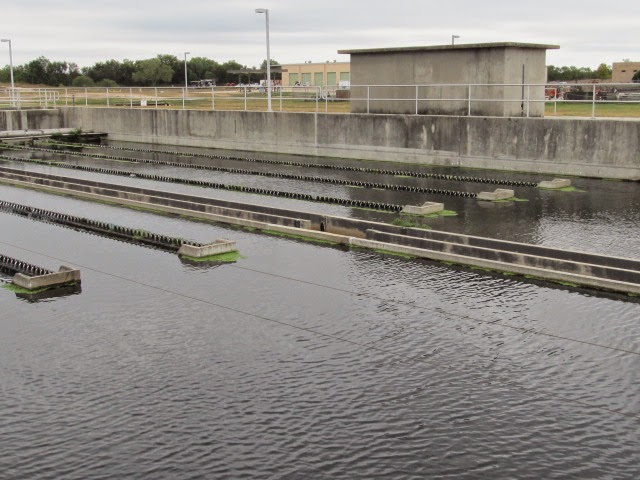 After the water is treated about 115 million gallons a day is pumped back into town to be used for irrigation and to fill the San Antonio River.  Purple pipe like these at the Tobin Center in San Antonio is used to designate recycled water. 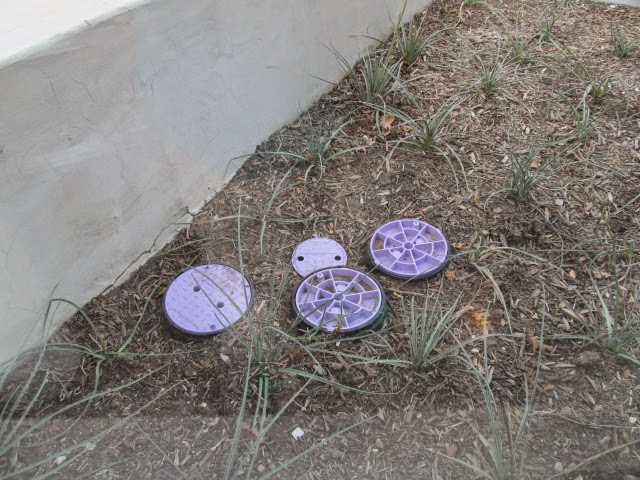 Excess water is released into the Medina River. 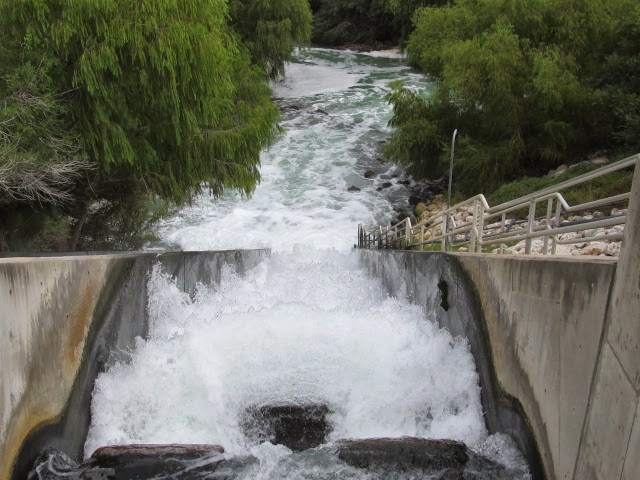 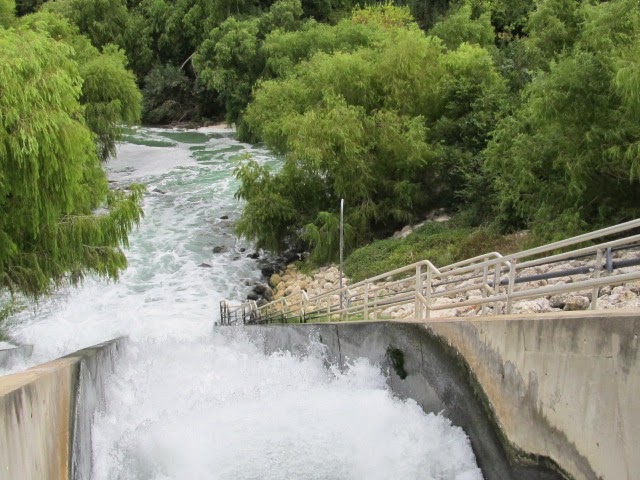 It's a long way down to the river yet behind me on the platform is a marker showing the river flooded to a very high level back in 1998 when up to 22 inches of rain fell across our area in 24 hours.  Did I mention we get most of our annual rainfall in large doses? 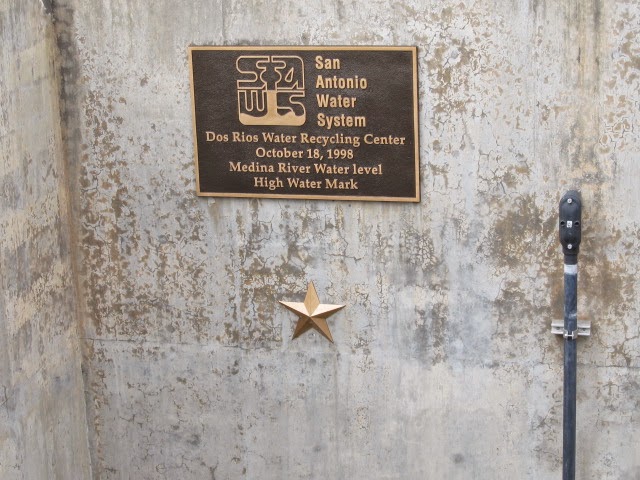 Although the water appears a bit green in color it is safe. 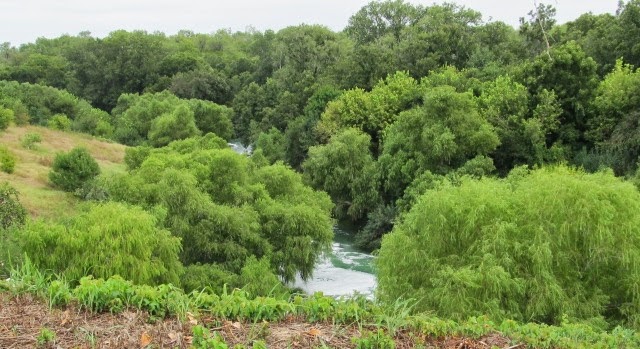 Bacteria from the water is returned to "reseed" the treatment area via an ancient system called the Archimedes' Screw. 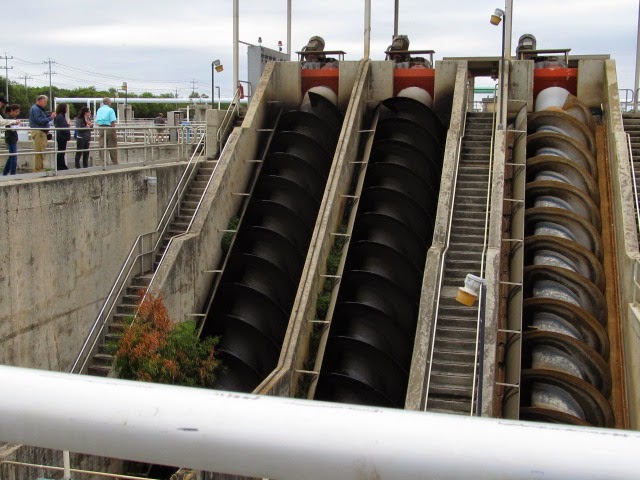 A 200-acre field of solar panels near the plant generates power in cooperation with SunEdison. 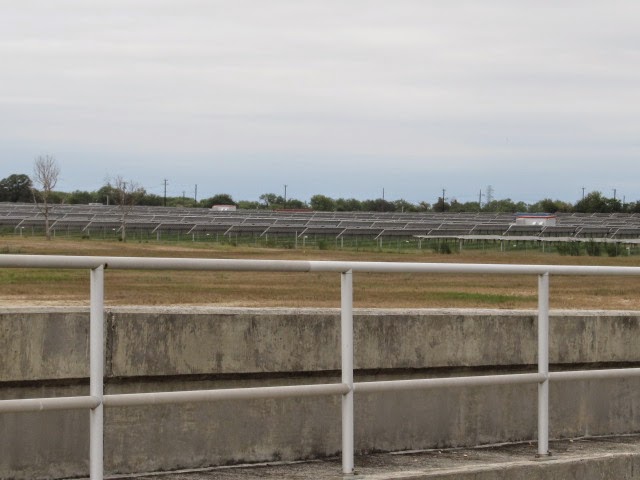 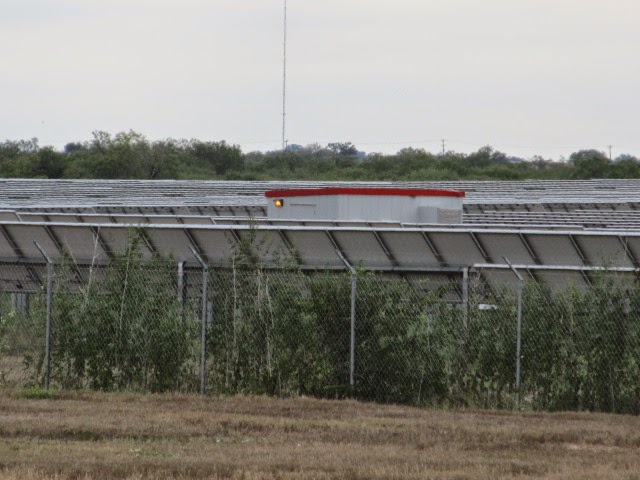 It was an excellent tour to learn more about our water resource and recycling systems.  SAWS offers the tour several times a year to the public.  You can learn more and register at SAWS website.
Posted by Shirley Fox at 12:36 PM