Just how much water is required to keep landscapes looking good through a drought in Central Texas?  Or is the question really "good enough" during such times?  These are questions our region has been grappling with during several years of extreme drought conditions.  The challenge is more than lack of rain since our growing population increases the demand for water, while landscapes are a major drain on water resources.

Last week my friend Melody and I traveled down to the Drought Simulator southeast of town to learn more about a new research project headed by Dr. Calvin Finch of Texas A&M's Institute of Renewable Natural Resources.  This Drought Survivability Study will enable researchers to document the performance of 100 of our most popular landscape plants under different drought conditions.  The study is sponsored jointly by the San Antonio Water System (SAWS), the cities of Austin and Georgetown, and the San Antonio River Authority (SARA), as well as Texas A&M.

Dr. Finch opened the presentation with an overview of the study.  I was particularly heartened to hear that Dr. Finch, horticulturist and gardener, is placing importance on keeping our landscapes looking good during drought while conserving water.  According to materials received at the meeting, currently available research indicates we may be overwatering our plants. 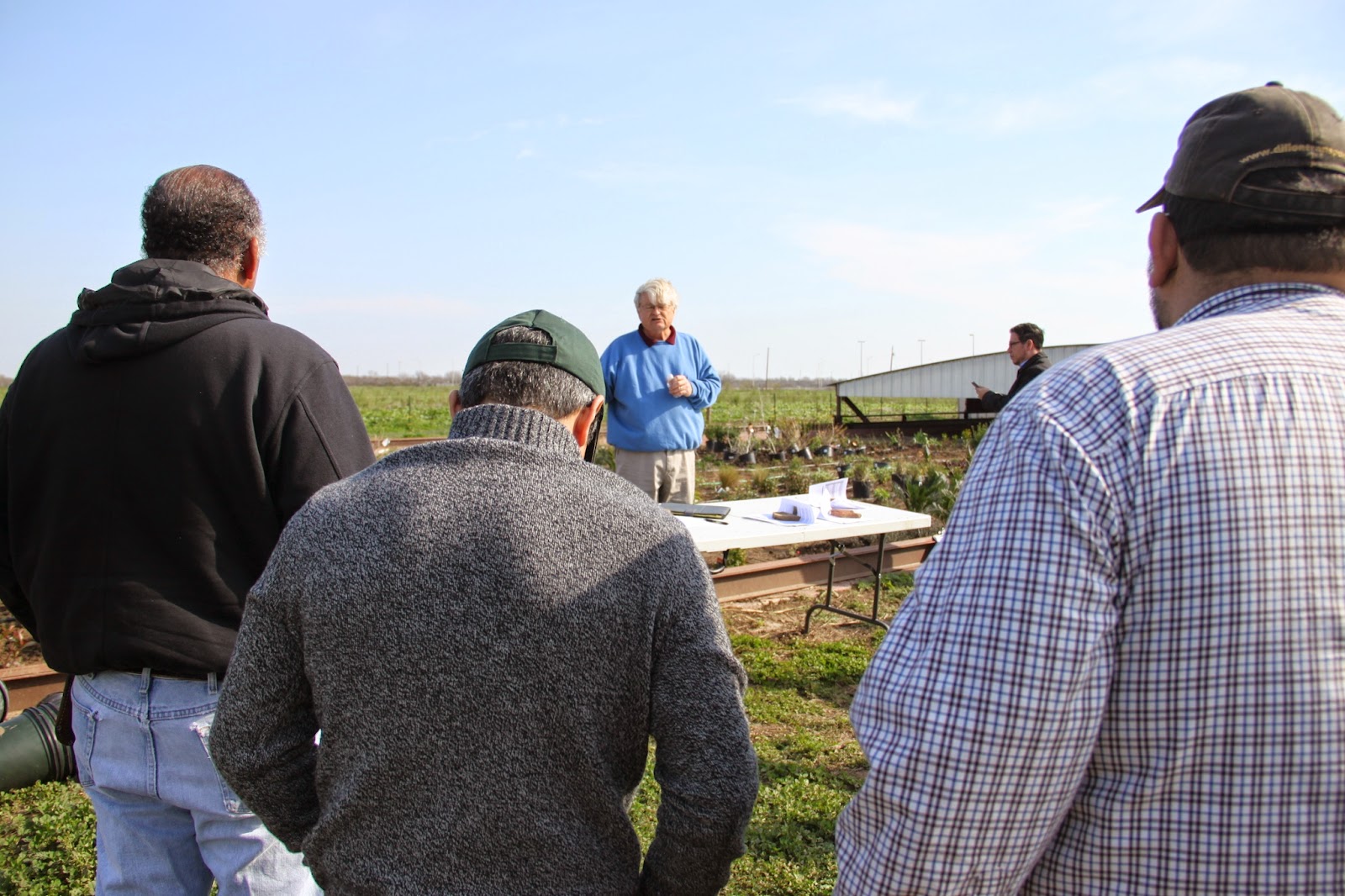 Christopher Charles of Austin Water (at table) spoke about the importance of having scientific data to reference when implementing standards for developers and landscapers.  Also in the photo is Tracy Hobson Lehmann of the San Antonio Express-News and Lee Marlowe from San Antonio River Authority. 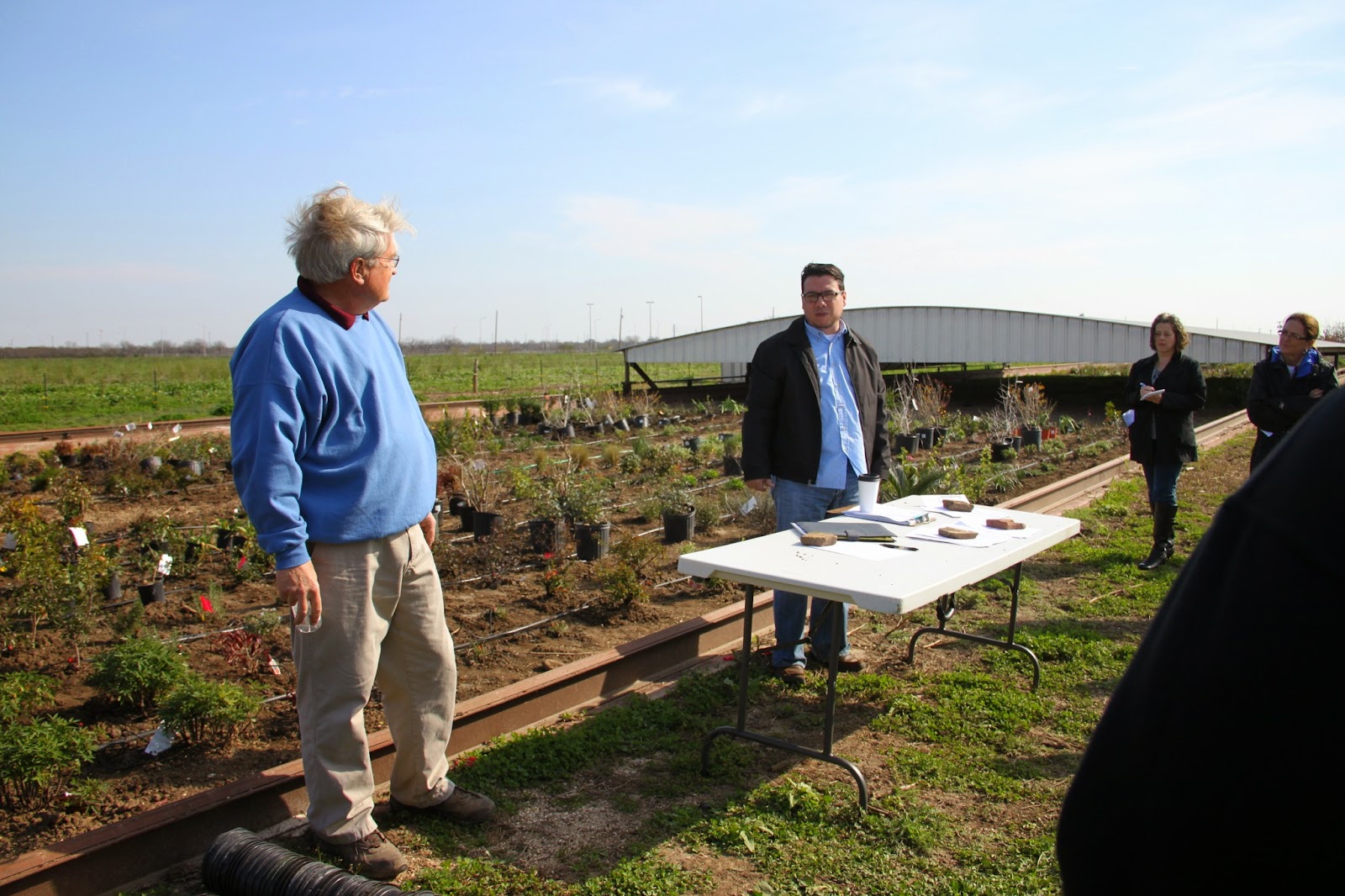 Input from nurseries and landscapers was used to select 100 different plants for the test, generally according to local popularity among consumers.  Although San Antonio, Austin and Georgetown (north of Austin) span different planting zones, the selected plants are common to all three areas.  Trees, shrubs, perennials, vines and grasses are included in the study which uses 1,600 plants (16 of each of the 100 varieties) divided among four grids.  In this photo you can see the Sago Palms are repeated across the other side of the grid. 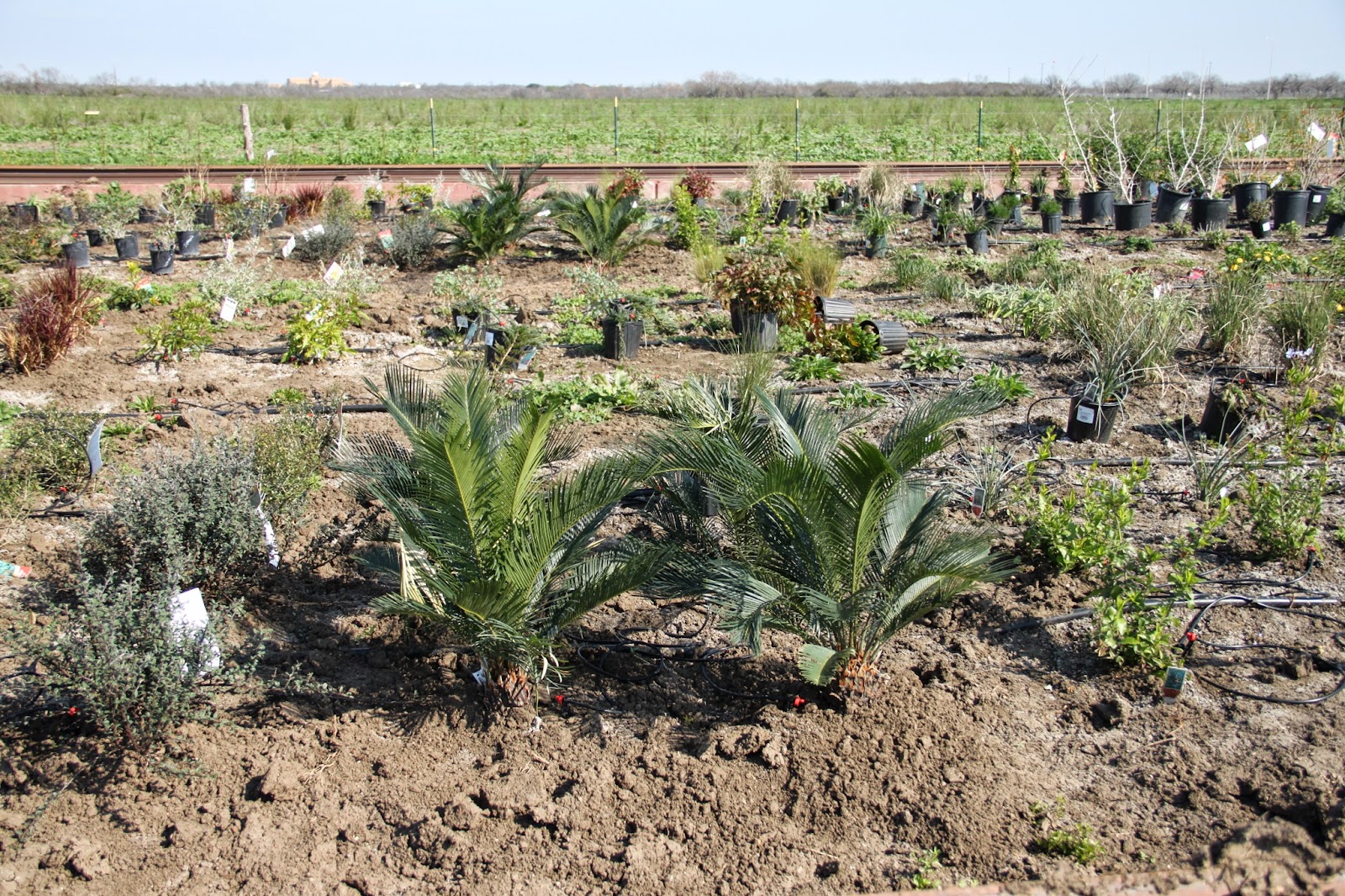 After initial watering in to get the plants established, the plants will receive varying amounts of hydration, including some which receive zero water.  In the event of rain a motorized metal roof on tracks will automatically move over the plants designated to receive no water at all during the study.  These plants will only be hydrated after the summer is over to see which plants revitalize.  Reclaimed water supplied by SAWS will be used during the study. 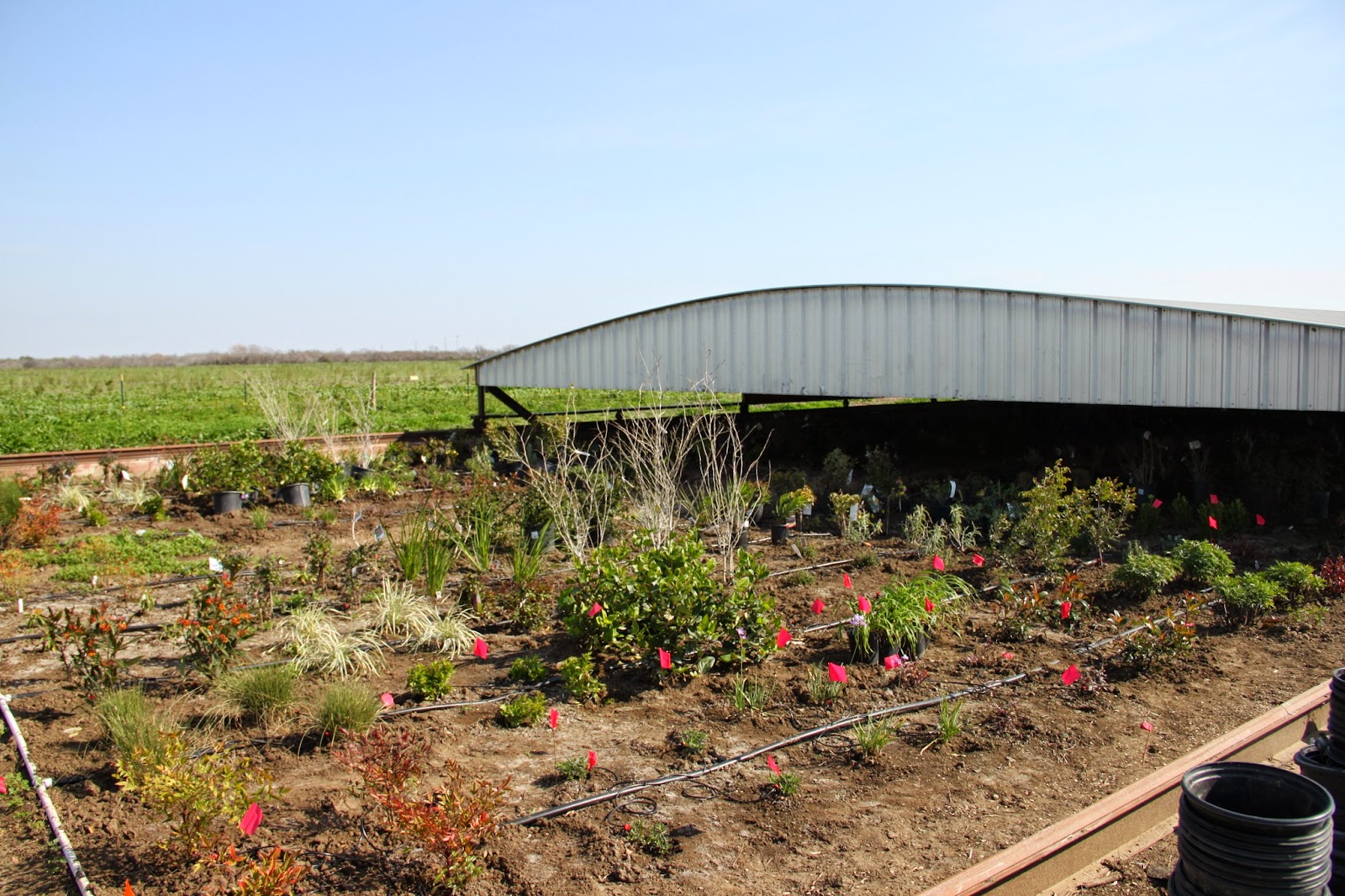 All the plants will receive the same amount of water for the first 90 days to get them established then watering will be varied based on percentage of "potential evapotranspiration to determine the actual amount of water they need to survive."  Potential evapotranspiration or PET is a new phrase to me so it was interesting to learn just how scientists determine the amount of water each plant needs.  It's an estimate of the "amount of water moving through the plant and from the soil based on the weather conditions" according to handout we received at the presentation.  We have had a particularly good winter for rain and this brings to mind a question on how water will be controlled to the other three grids if we have above-average rainfall. 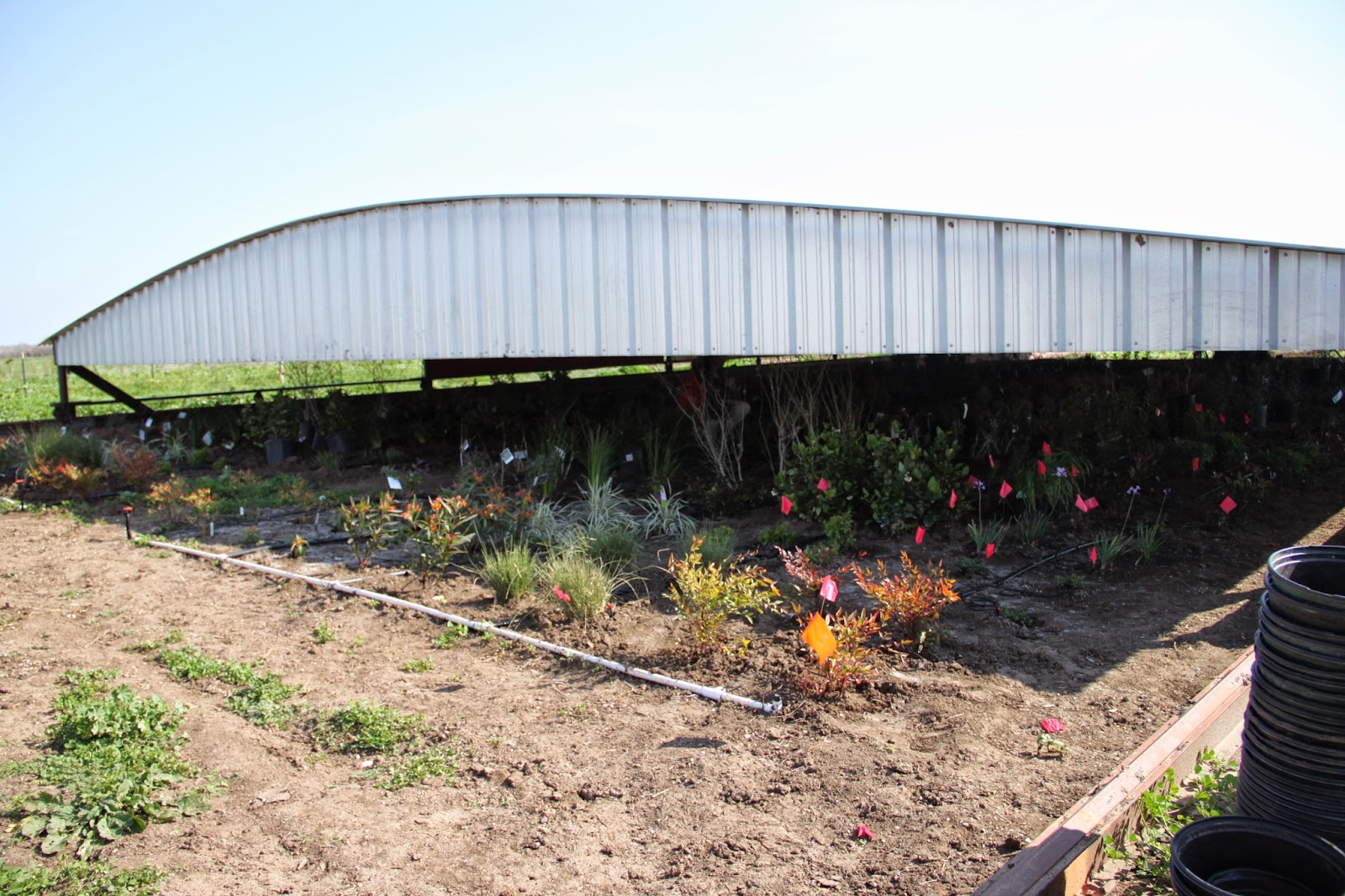 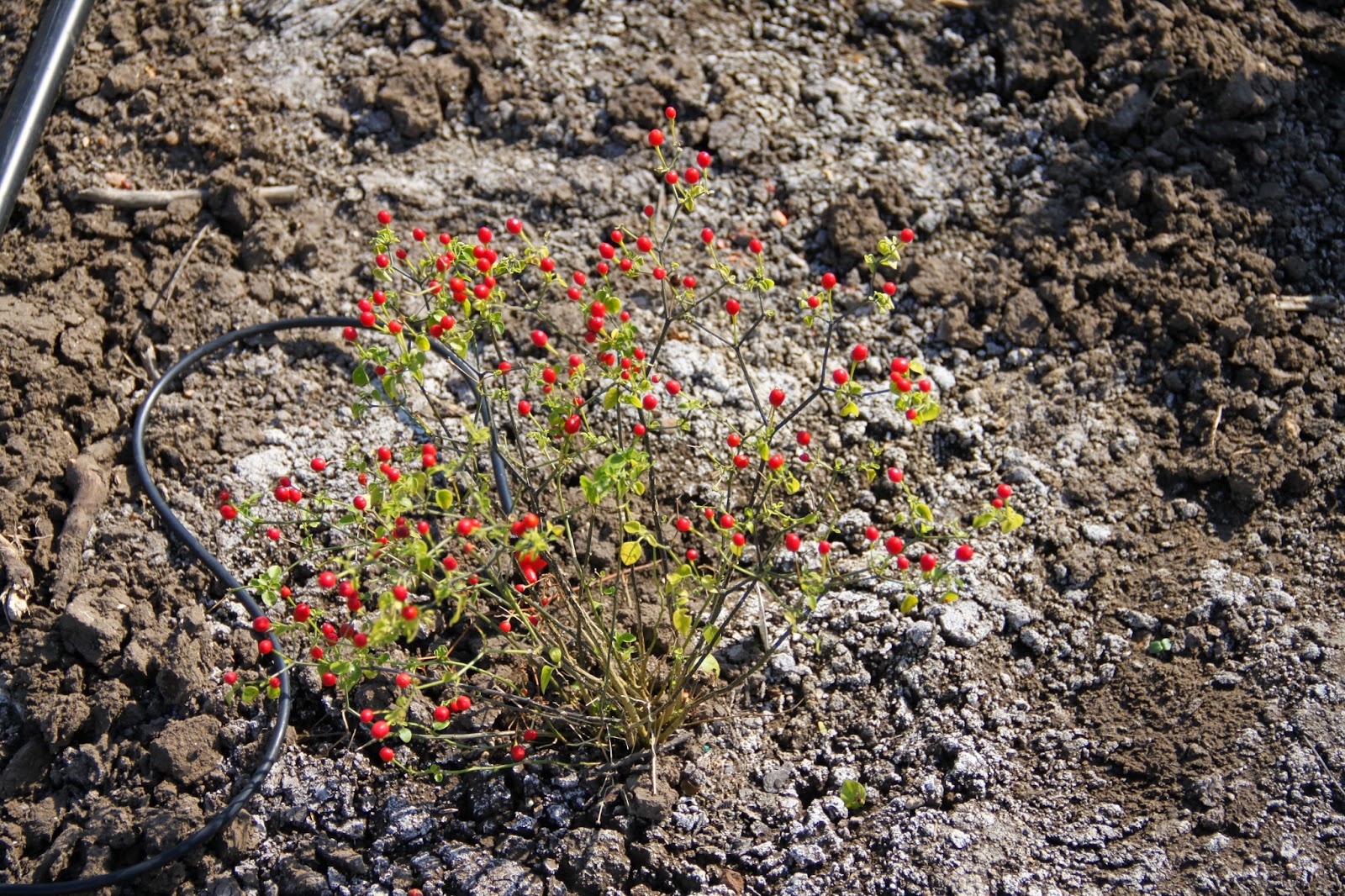 After a year of observation and data gathering, the best performers will be part of two recommended landscape plans for our region. 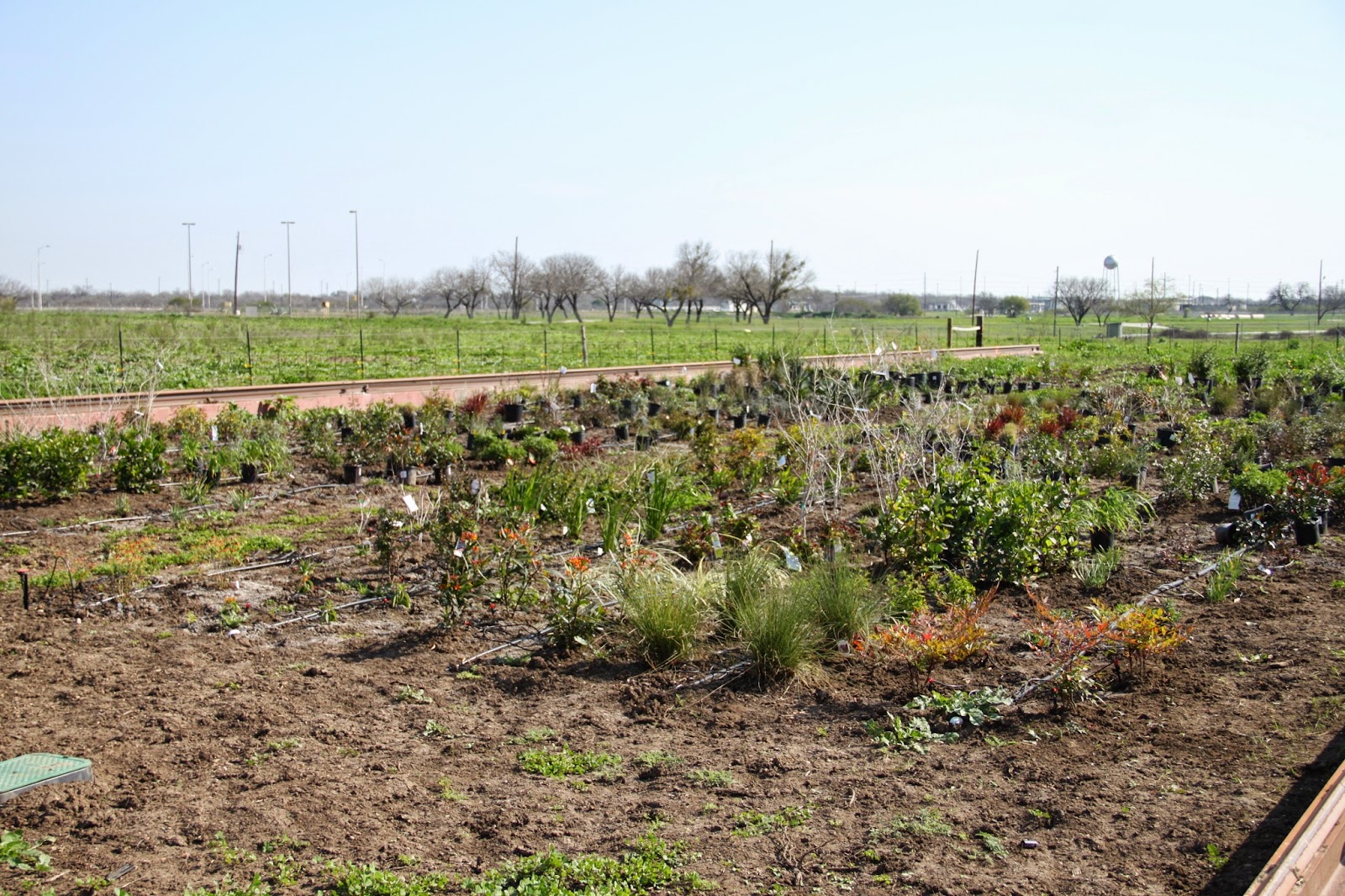 The City of Georgetown will have a second site running a concurrent test.  The 5,000 square feet Drought Simulator structure was previously used for a turf grass study.  The area to the right is under the structure when not in use and will not be planted. 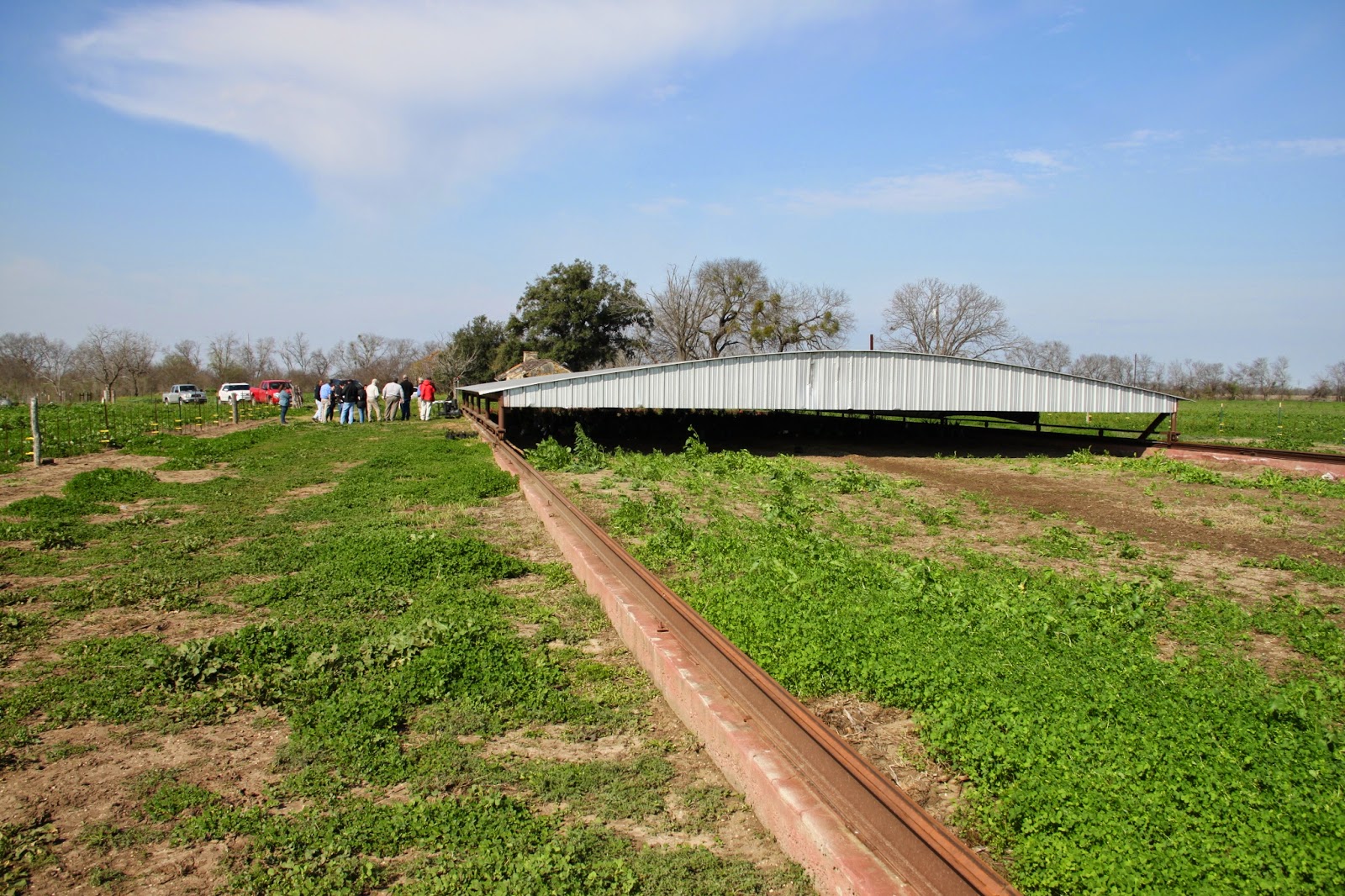 After our walking tour, Melody (in the blue jacket) chatted with Tracy from the Express-News about upcoming garden events in San Antonio.  On the right, representatives from the City of Georgetown, San Antonio Water System, and Texas A&M discuss the project. 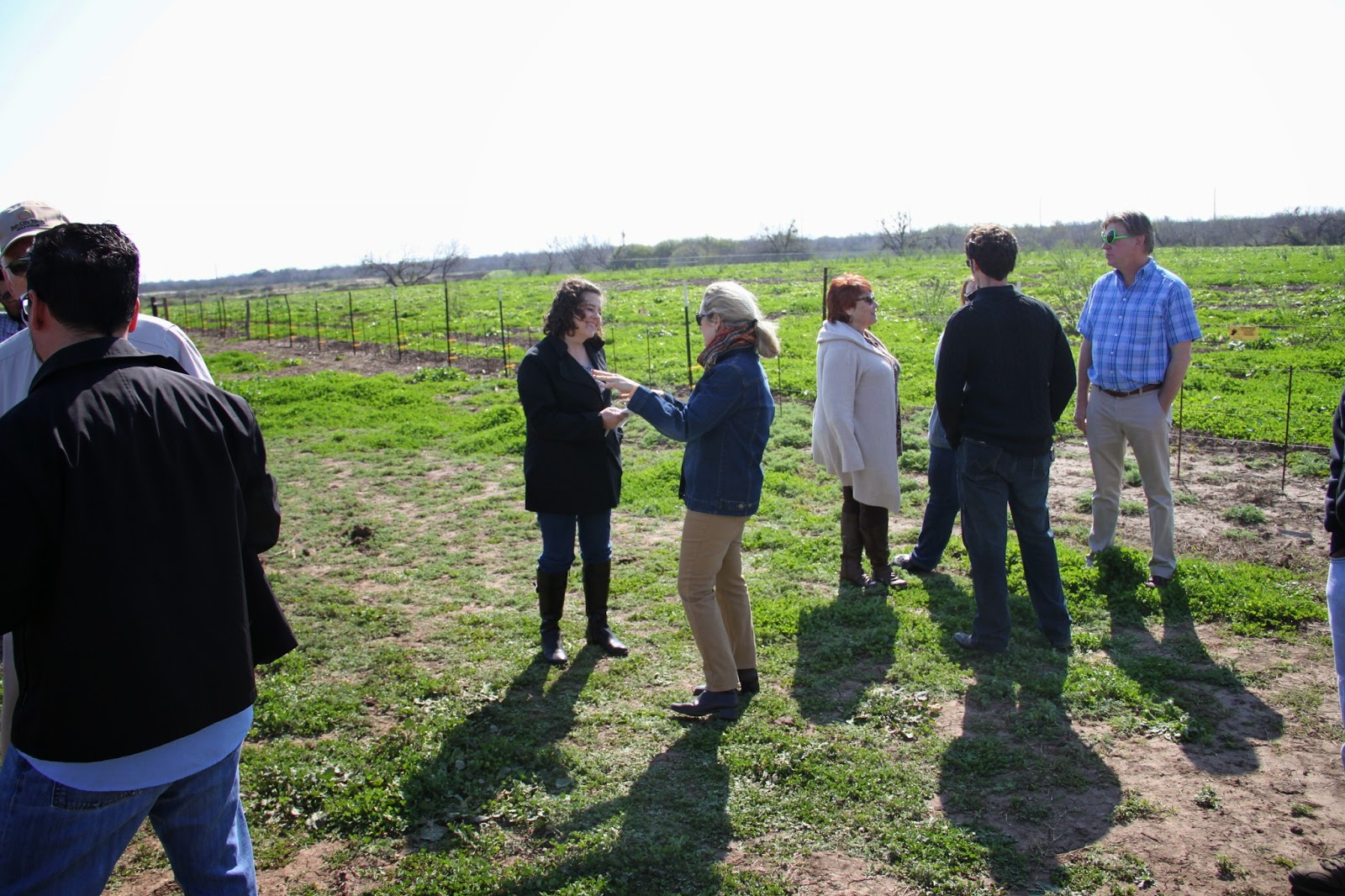 I'll be following the project over the next year and look forward to posting the progress and results as information becomes available.  More details are available at Texas Agrilife Today.
Posted by Shirley Fox at 12:57 PM