August is a quiet time in the garden here in San Antonio.  The blooms of July have faded and the perennials have been trimmed back to await the cooler weather of autumn.  It's time for a walk through the garden and I'm joining Helen at The Patient Gardener's Weblog for a tour.  We have had a good summer with fewer triple-digit highs than typical and more clouds.  Although rain is predicted regularly we haven't had more than a few light showers this month.  But generally, things look pretty good for August in South Texas. 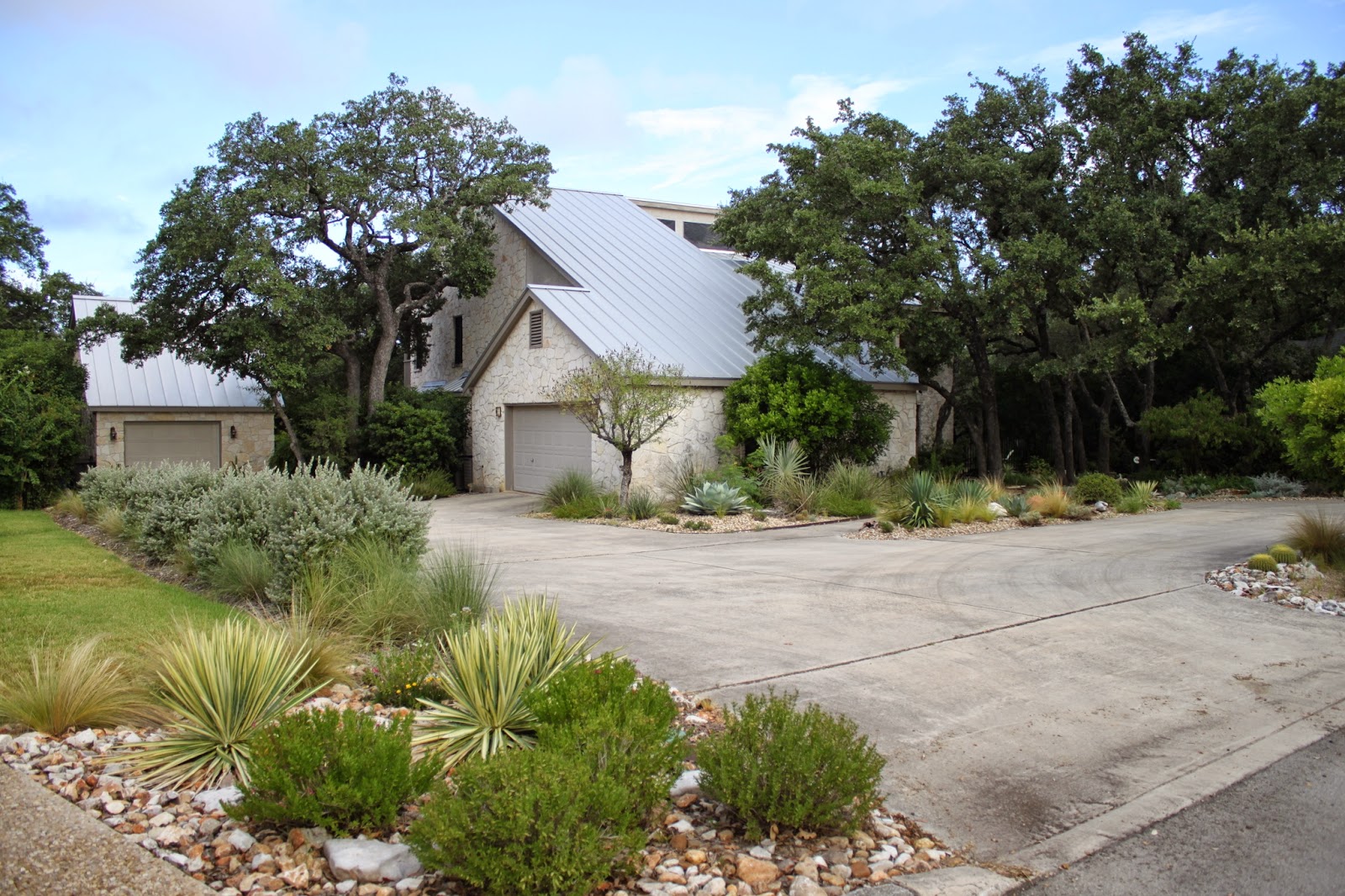 For contrast a similar view from July.  The sage blooms only after a rain so I'm looking forward to September rains and another round of blooms like these. 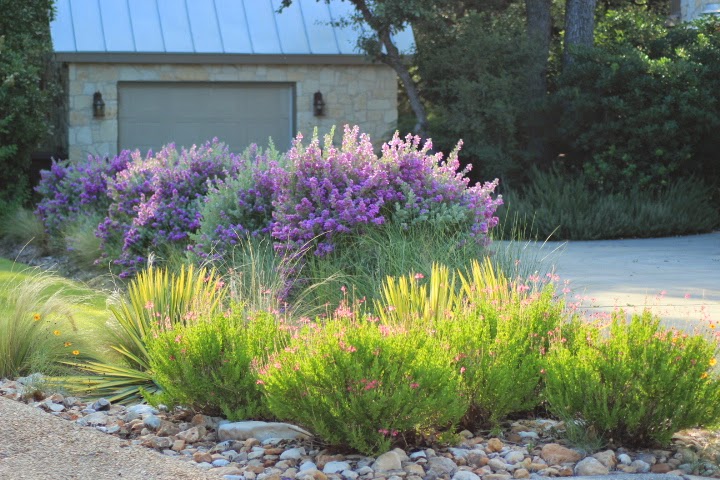 The Bismarck Palm in front of the garage has recovered from the harsh winter freeze by producing three new fronds so far.  The brown freeze-damaged frond has been left in place to protect the plant until it fully recovers and will probably be removed next spring.  The little green dots in front of the Agave are Damianita which replaced the New Gold Lantana earlier this year.  They will take some time to fill in and I might add a few more to help out.  Damianta are evergreen and more drought tolerant than lantana so I made the switch when the lantana struggled last summer.  Eventually the Damianita will fill this area with gold flowers from spring to fall. 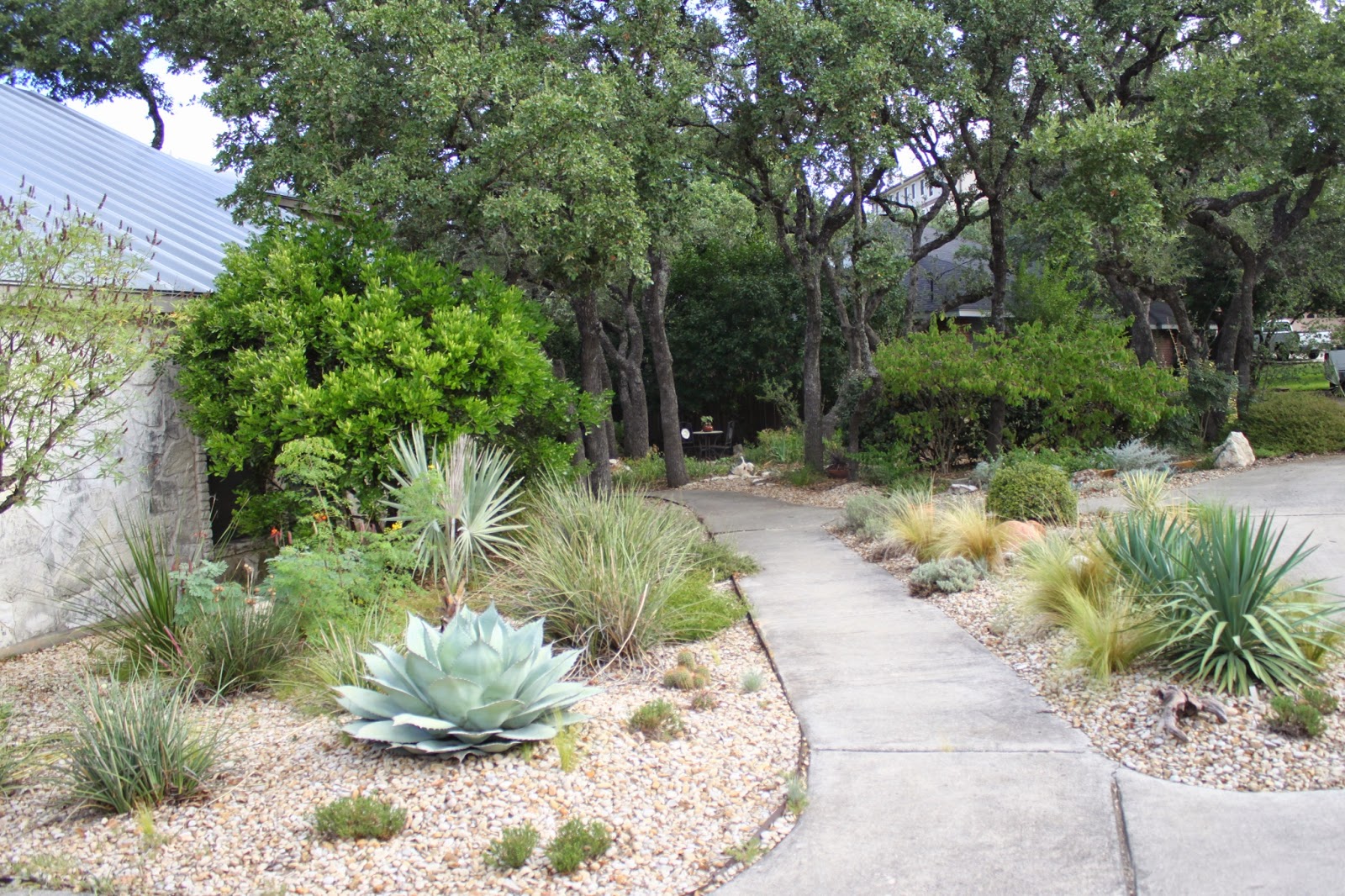 The Sago Palm on the north side of the driveway has already filled in around the bottom where it was severely cut back to the trunk just a few months ago. 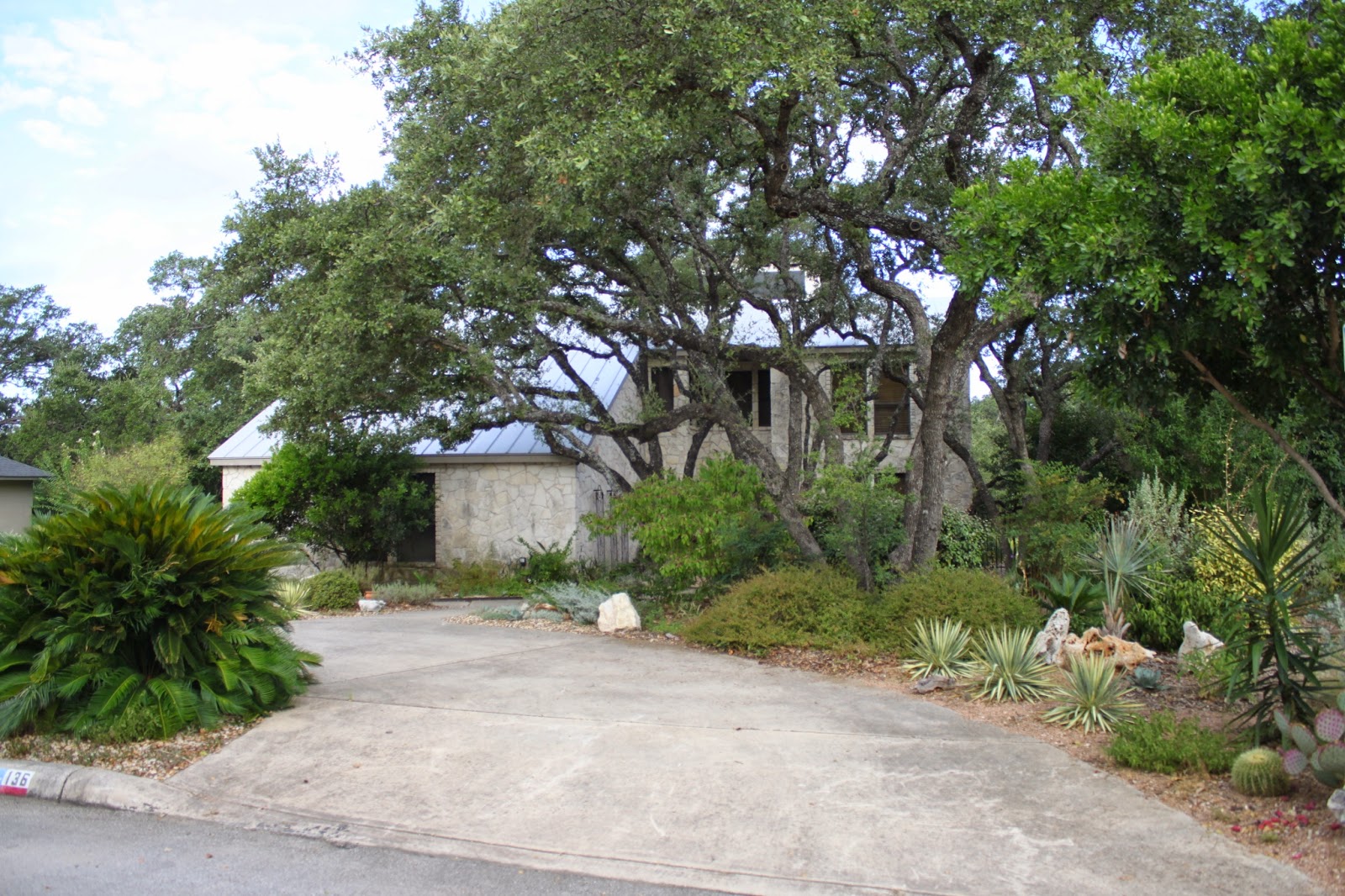 Since things are slow in the garden I'll show you a few new views.  Moving to the right is a row of screening plants along the north side.  Those red fruits are pomegranates which are almost ready.  We'll have just two this year since most of the buds were lost to a late frost.  The gold plant is a variegated Elaeagnus which picks up the yellow and silver scheme carried across the yard. 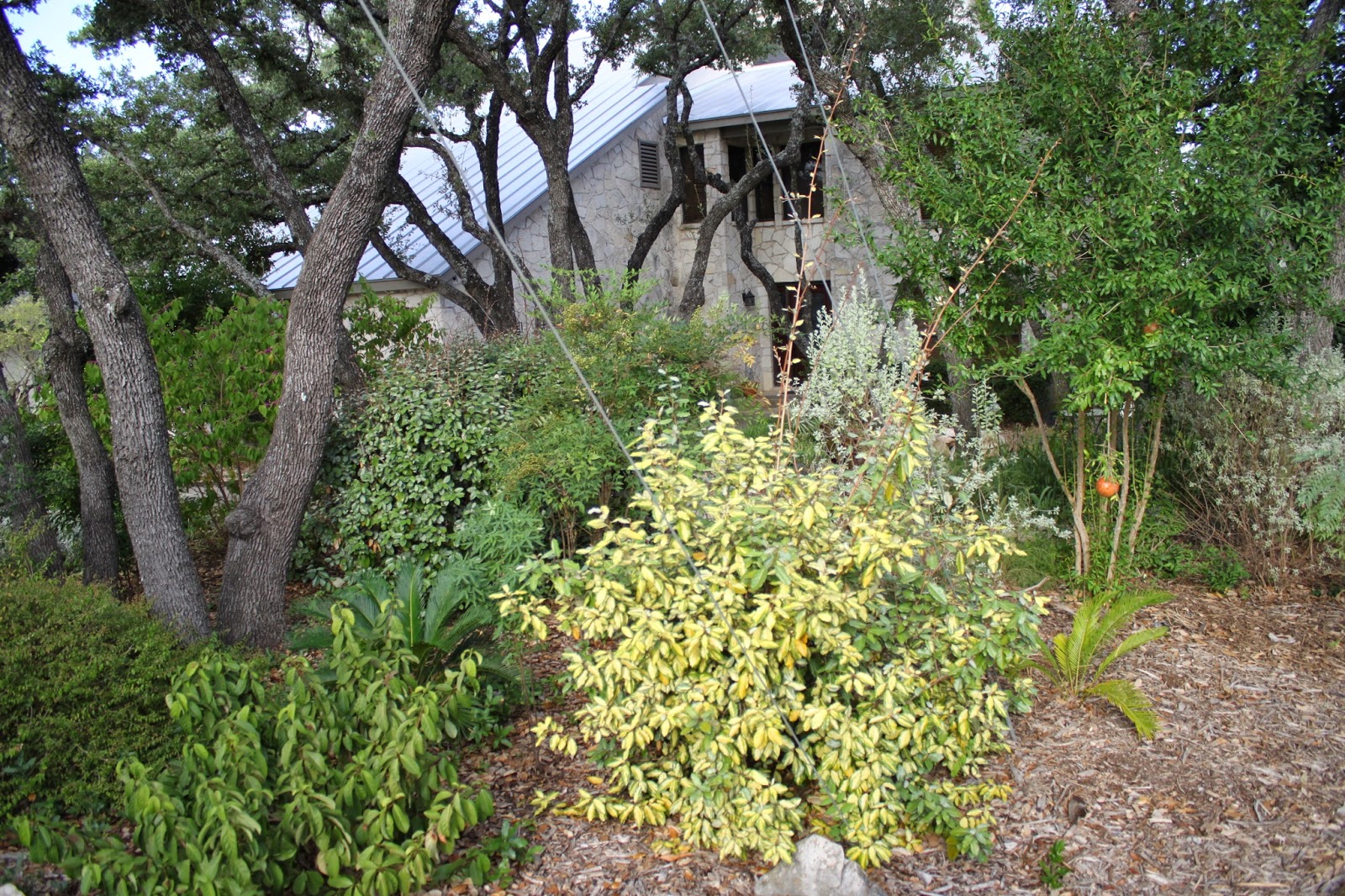 Time to head into the cooler shade garden and see the new plantings which are holding up well. 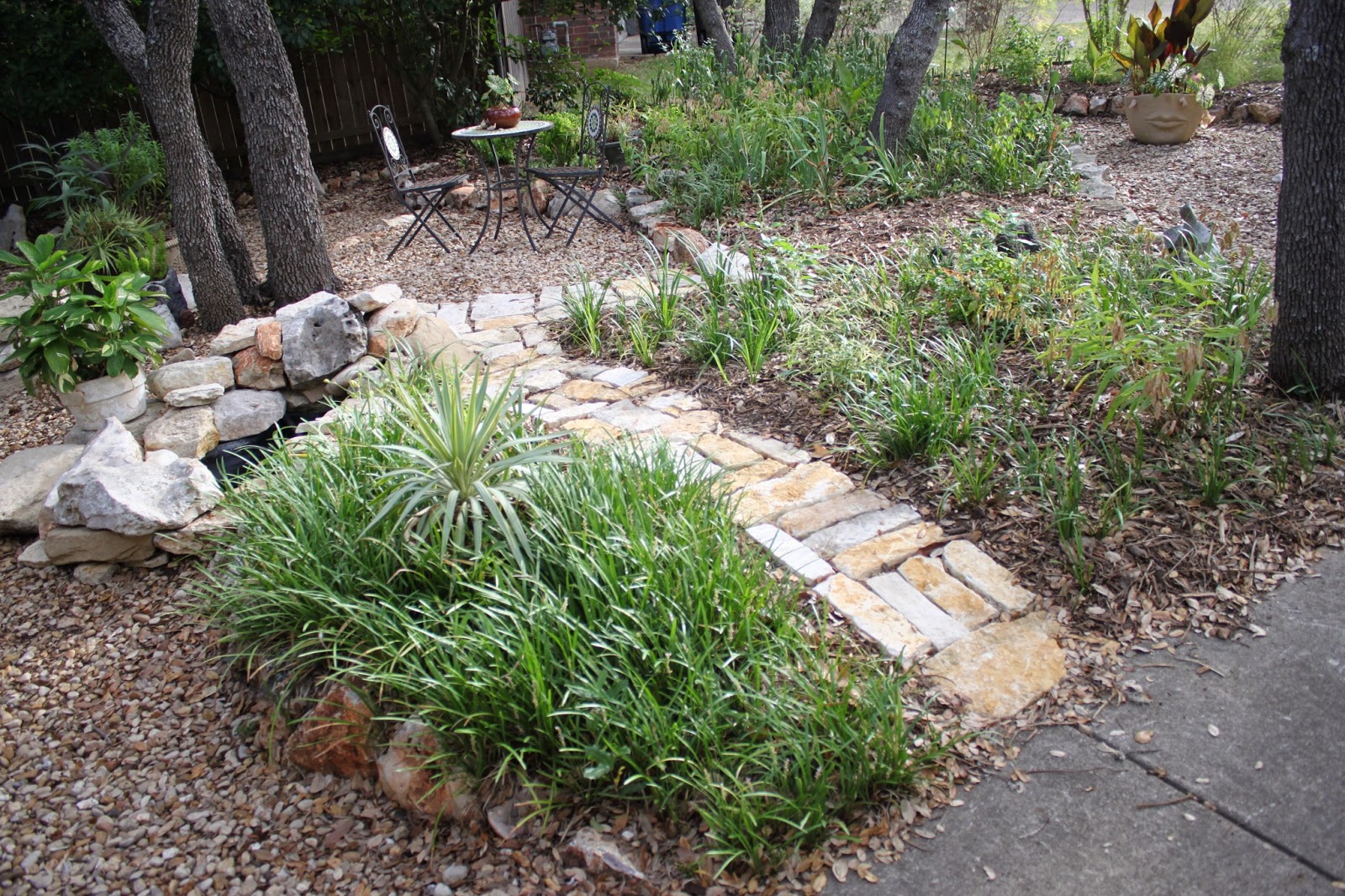 Below is a view I haven't shown before.  We added a row of trellises to the wall this week after a long consideration of how to deal with the large blank space.  Few plants will grow tall against a shady wall and it does go up 20 feet so maintaining ivy could be a challenge.  In the corner to the right a tall Will Fleming Yaupon has been planted this week to give the space a little more height as it grows to about 15 feet and stays narrow. 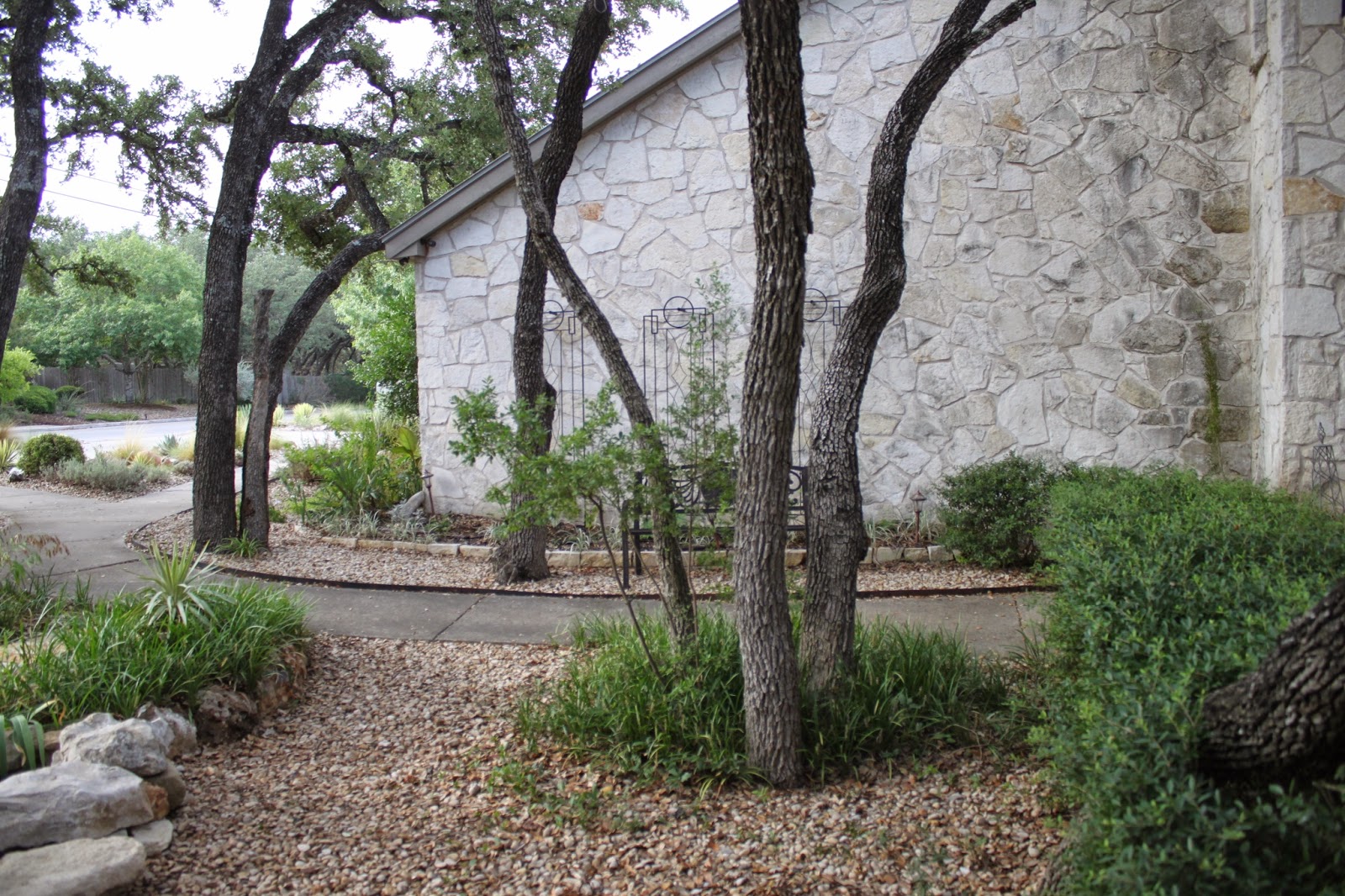 Before we take our traditional look through the back gate, we'll turn around and admire the new stone path Neal put in when we reworked the beds here in the early summer.  This is similar to the view I see from my computer when blogging.  Just a bit more to the right. 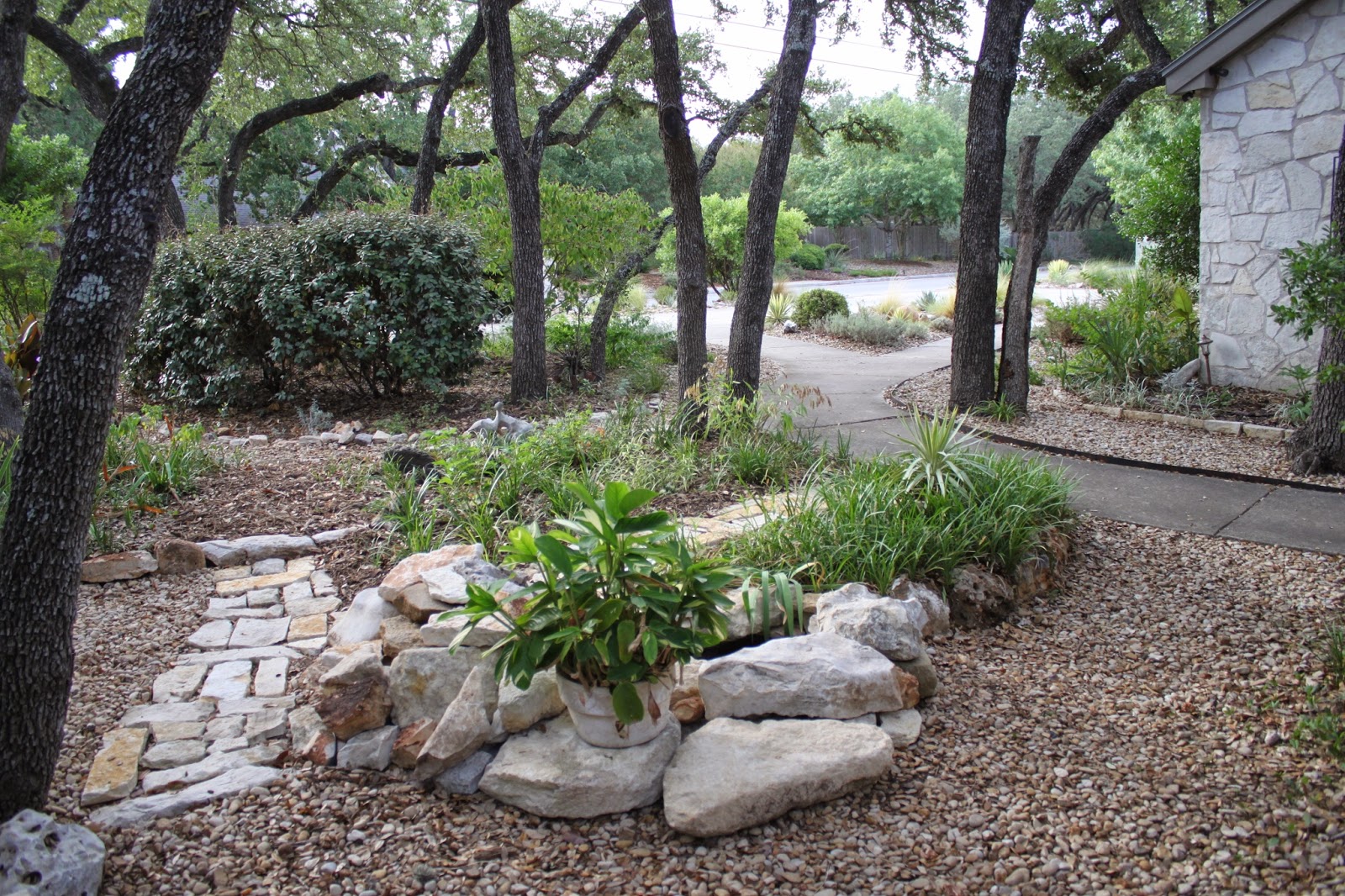 Now over to the gate and a look at how the circle garden is faring this hot August day. 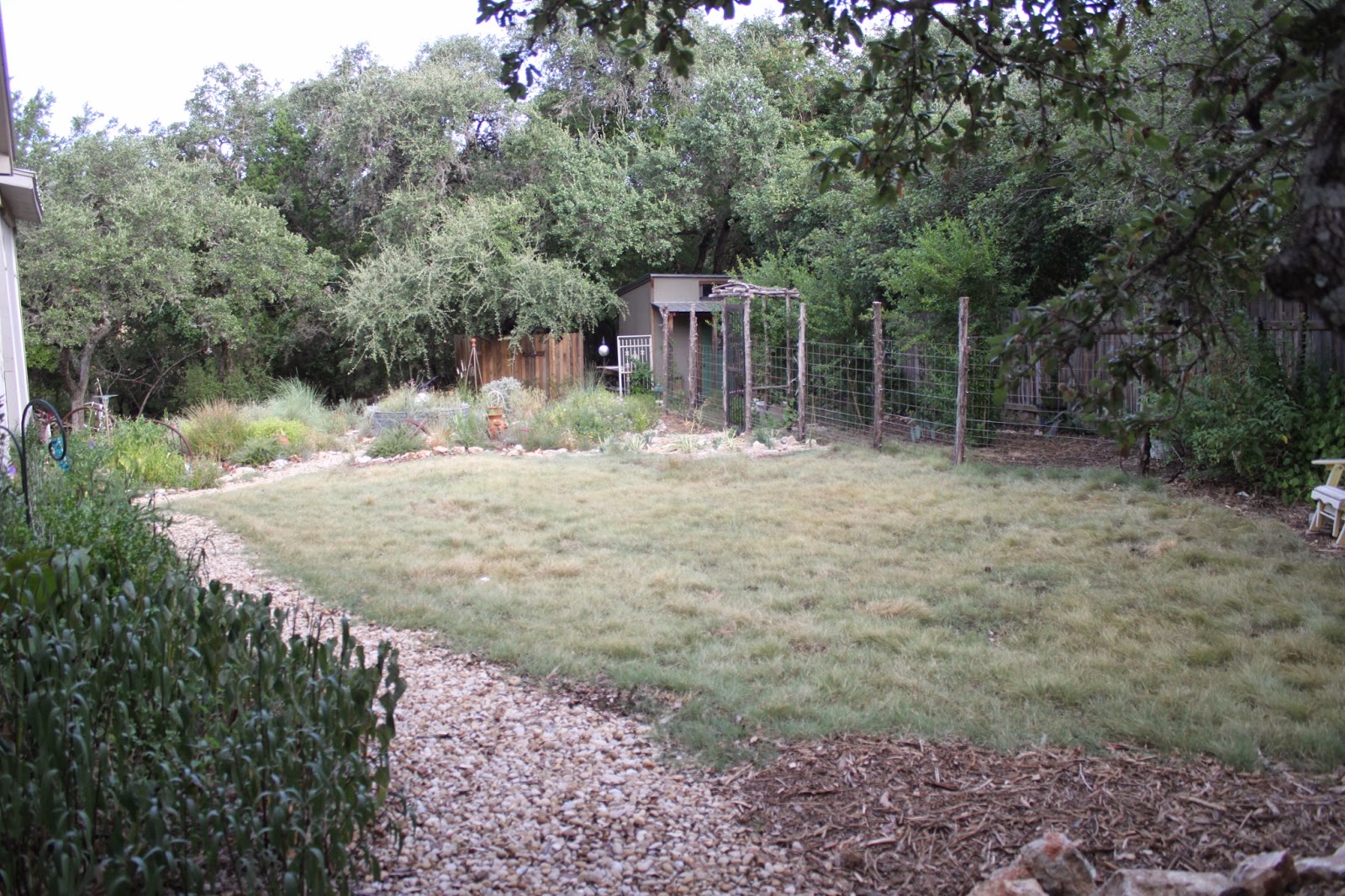 There are several comments I often hear from first-time visitors.  It seems this garden appears much smaller on the blog than it actually is.  The circle is 30 feet or 9.14 meters diameter.  Add in about 15 feet for the gardens and pathways on either side and you can get an idea of the size. 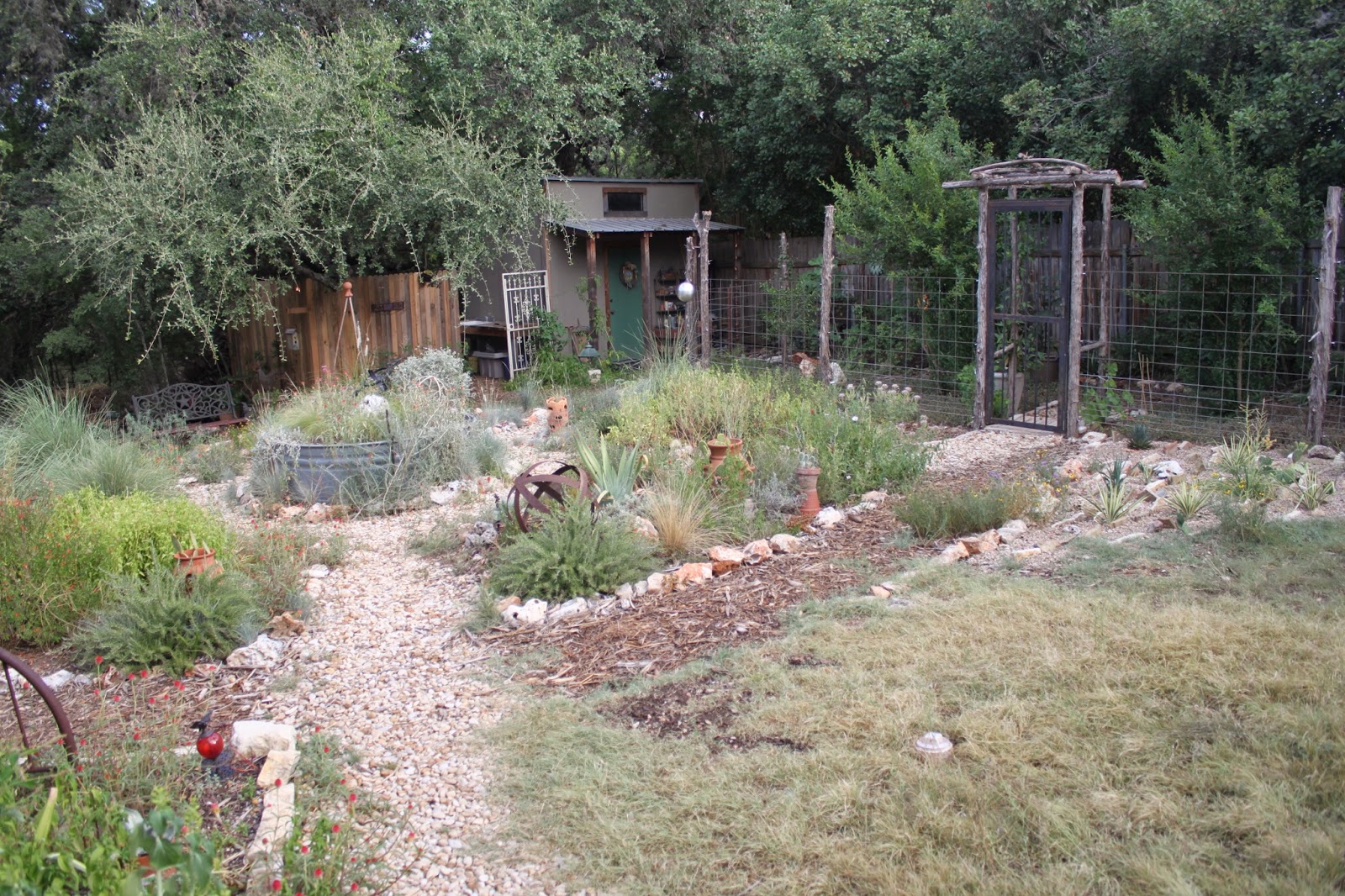 Despite the rustic scenes shown here we live in suburban neighborhood just a few blocks from a busy freeway interchange and major commercial area.  This is another surprise often expressed by first-time visitors.

The crevice garden is growing in quickly and I've cleared the fence line of faded wildflowers which have gone to seed.  The native buffalo grass lawn is hanging right on the edge of dormancy.  We should be able to keep it greener as the heat of summer recedes. 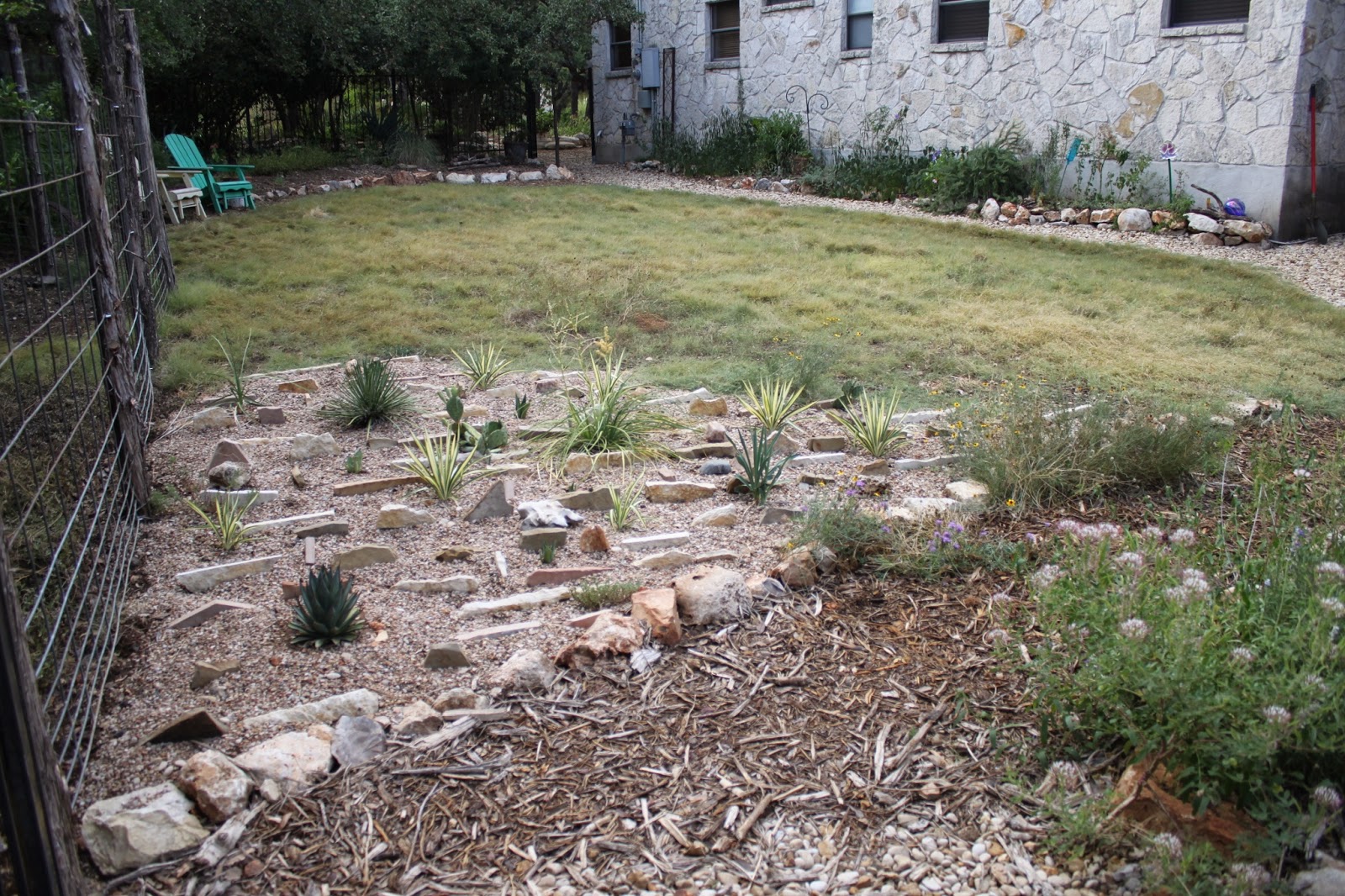 The lack of rain has left the horseherb ground cover brown and crispy but the Hamelia on the left is happy with the heat and producing bright orange blooms.  While most of this garden has been cut back, over to the right in the circle you can just make out the tall, pale orange spikes of the Aniscanthus wrightii which is a hummingbird magnet.  Pine Muhly is sending up a spray of bloom stalks as well. Ending as I always do with a view through the side gate and those arching oaks.  I'll rearrange all the pots stashed under the trees as soon as we cool off a bit. 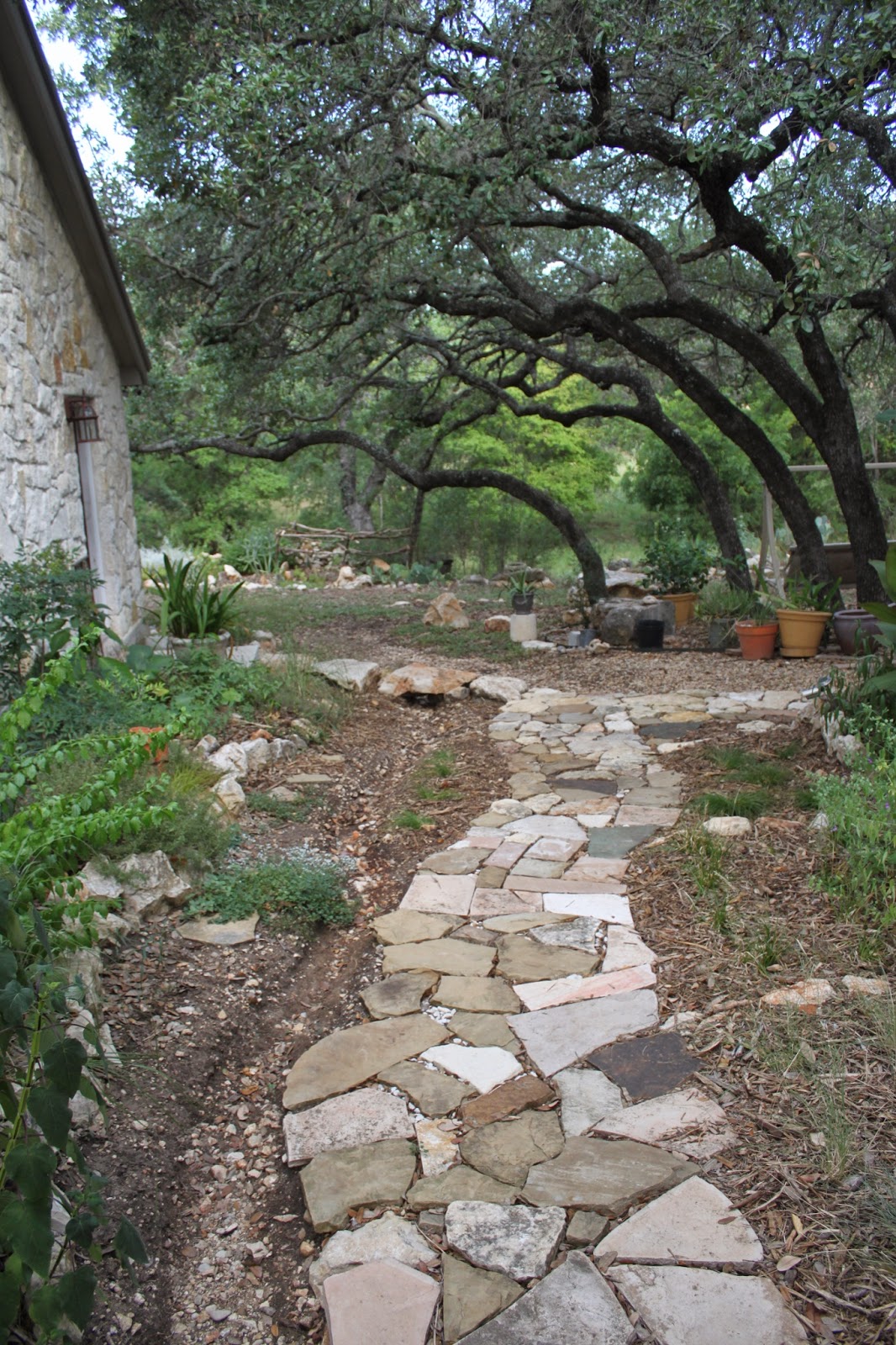 With September we'll begin our second gardening season of the year so it's time to fertilize and plan for moving and adding plants as needed.  I'm expecting more garden visitors in the next few months so we'll see how much I can get done in the next six weeks.