When an unknown native plant shows up in my garden I'll usually leave it in place for a season to see if it blooms.  Sometimes it turns out to be a weed but occasionally the approach works out far better than I could have guessed.  I'm joining Gail at Clay and Limestone for Wildflower Wednesday to feature one of those potential weeds that turned out to be a very special native plant.  Clematis drummondii is commonly known as Old Man's Beard, Texas Virgin's Bower, or Goats Beard.  It's easy to see why "beard" is part of the common name. 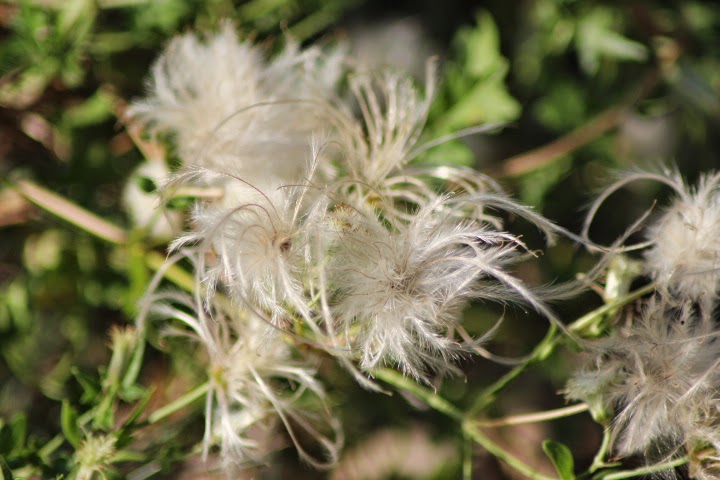 In reworking the circle garden last spring we decided to leave a rather nondescript vine in place just to see what it was.  The decision was based more on my love of native plants than its appearance.  In fact, the only non-blooming photo I have of it is this one near a late-blooming Texas Bluebonnet during June.  The Clematis drummondii vine is in the foreground spilling onto the walkway. 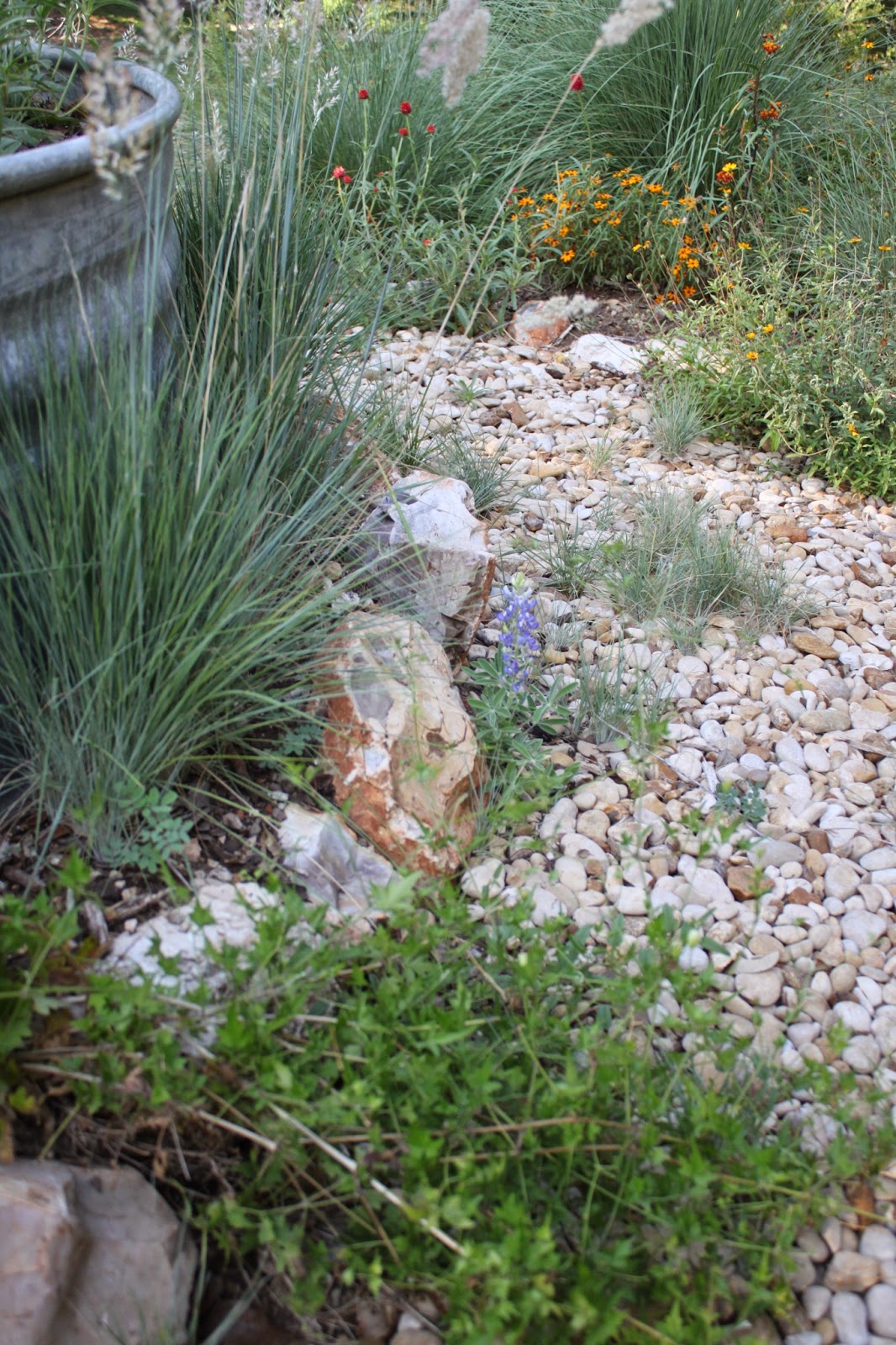 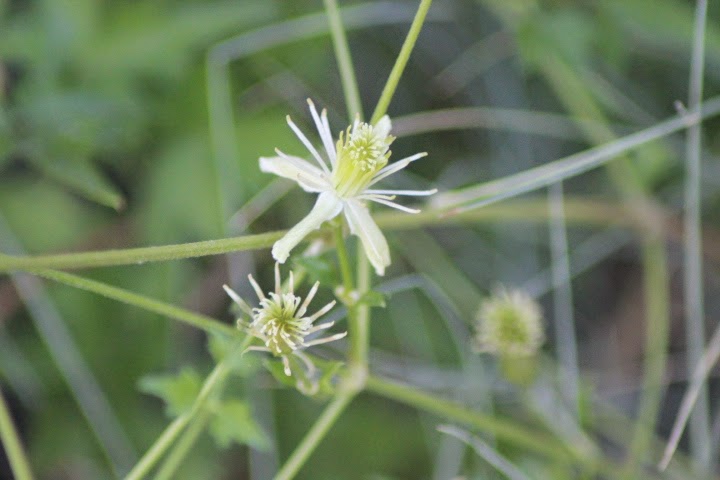 ....and I was off to the computer for identification.  Clematis drummondii is something I wouldn't have guessed. 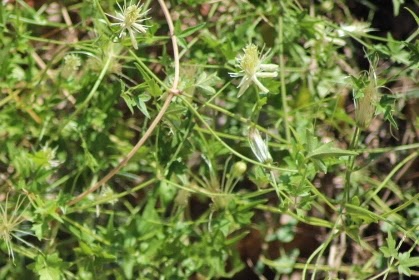 The small blooms quickly burst out into glistening beards and it has been blooming most of August with new flowers appearing alongside older ones.  Clematis drummondii has separate male and female plants, these showy plumes cover the female plant. 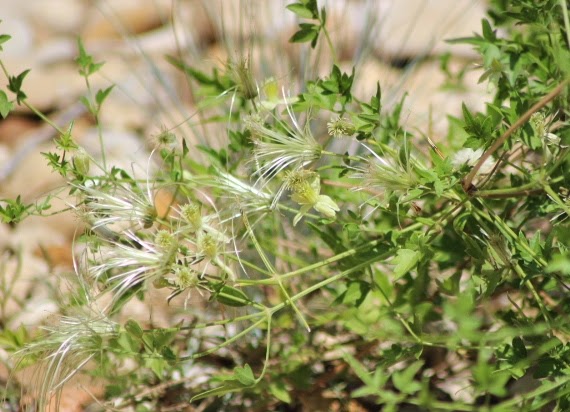 Now that I see it in bloom I remember it used to grow on an undeveloped lot at the end of my street until the neighboring business decided to have their lawn service mow down the "weeds".  Perhaps it migrated from there since this spot is downstream during heavy rains. 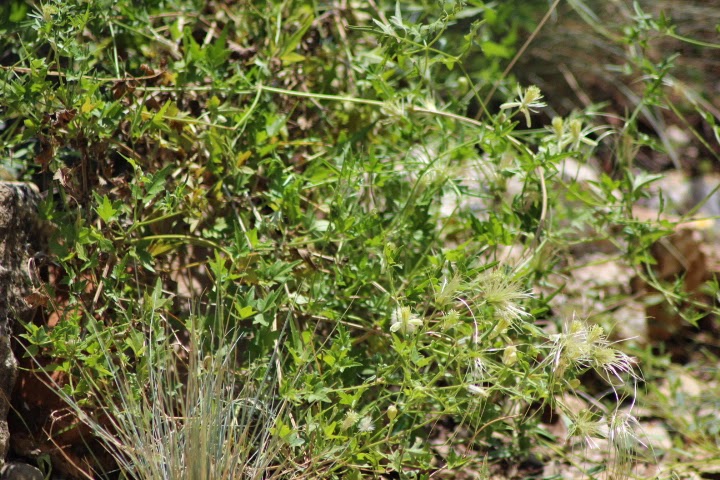 I'm glad it found a new home in my garden.  The beards are 3" long and quite a surprise coming from the small flowers. 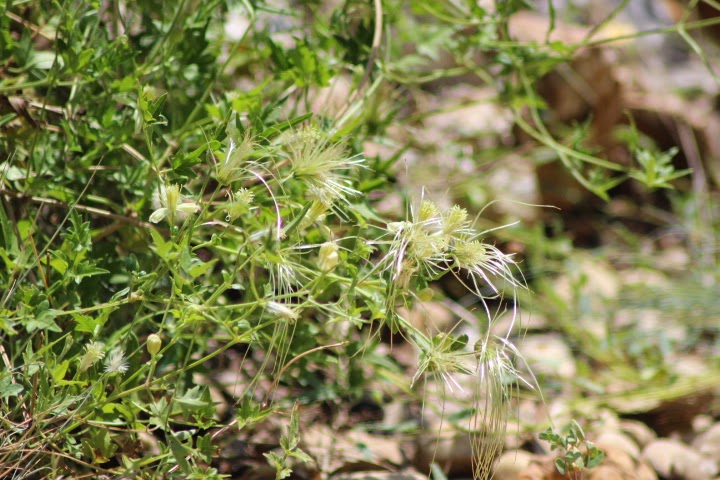 As the plumes age the seeds blow out a bit so if this fluffy look doesn't work in your garden Clematis drummondii might not be a good choice. 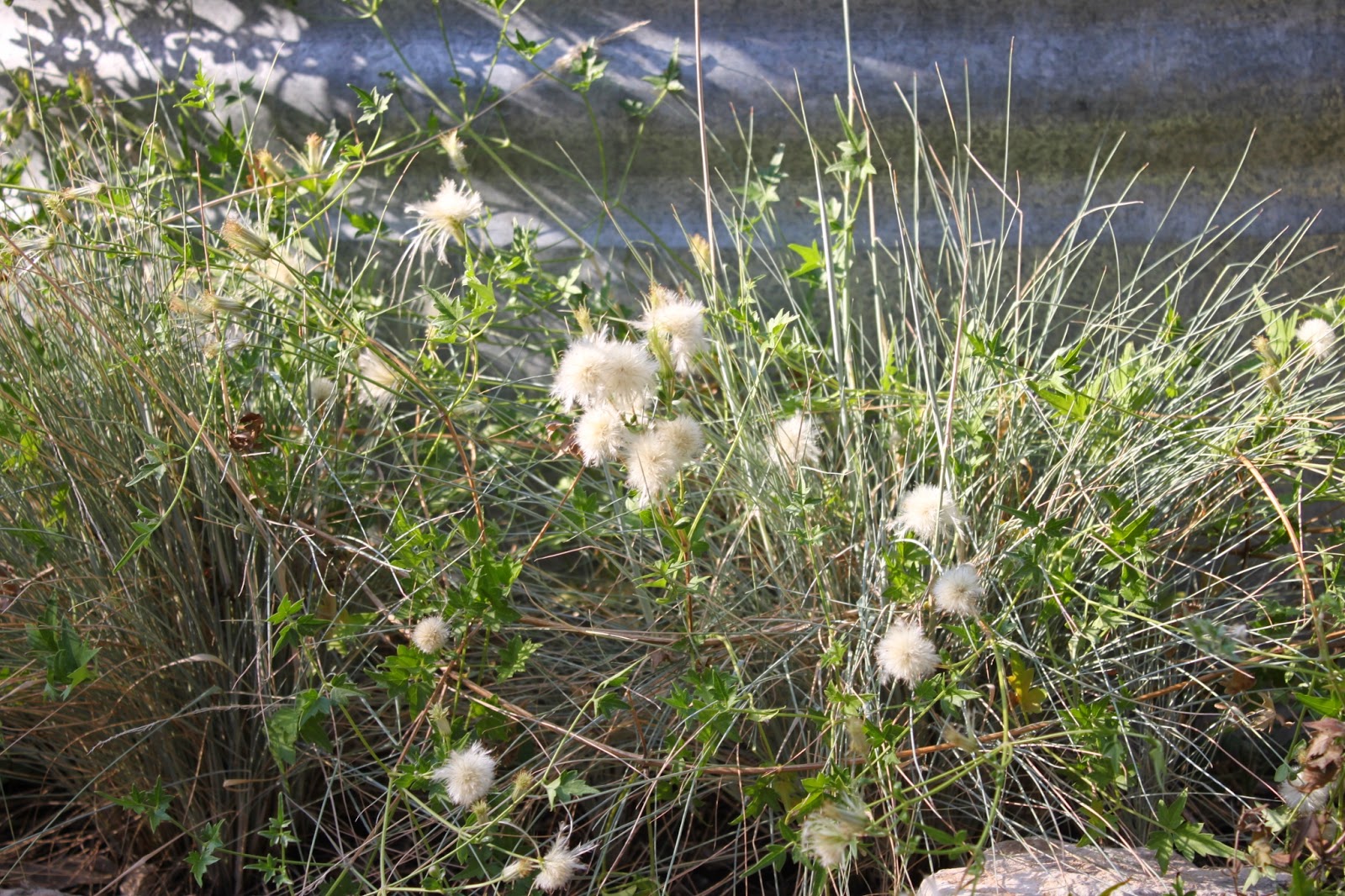 According to the Native Plant Database, Clematis drummondii is native to Central Texas and often found on rocky, limestone slopes in the Edwards Plateau region.  This cold and heat-tolerant perennial vine grows easily from seed and can be transplanted in the winter.  Good to know because it's a vining plant I'd like to move over to the fence where those vines, which grow up to 25' long, can climb to their heart's content instead of flopping over the pathway. 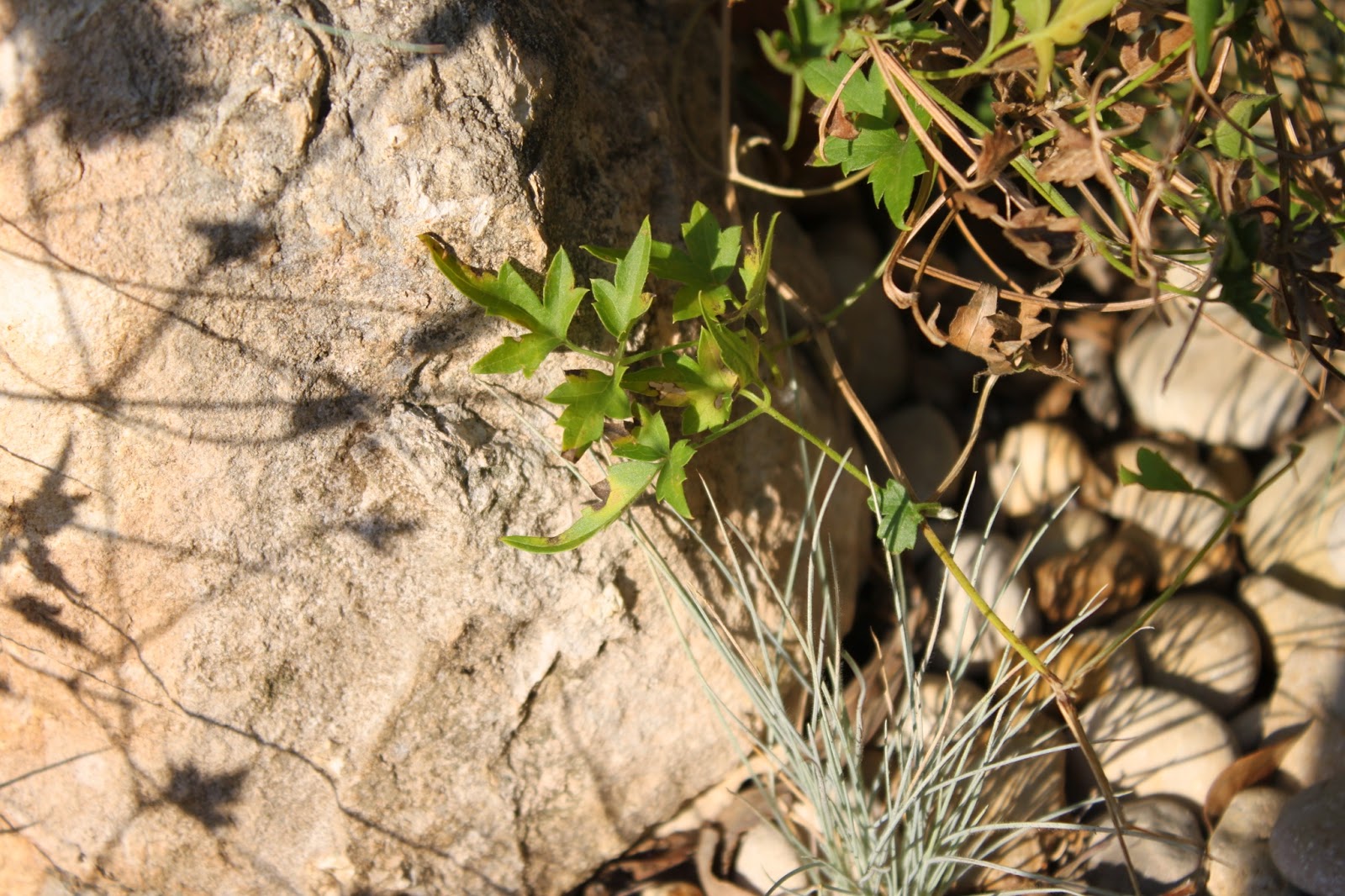 The information lists it as minimally deer resistant but so far not one nibble though many surrounding plants have been nibbled or even devoured.  It is listed as tolerant of both drought and moist soils.  The information also states that once established it is almost impossible to get rid of it.  Why would I want to? 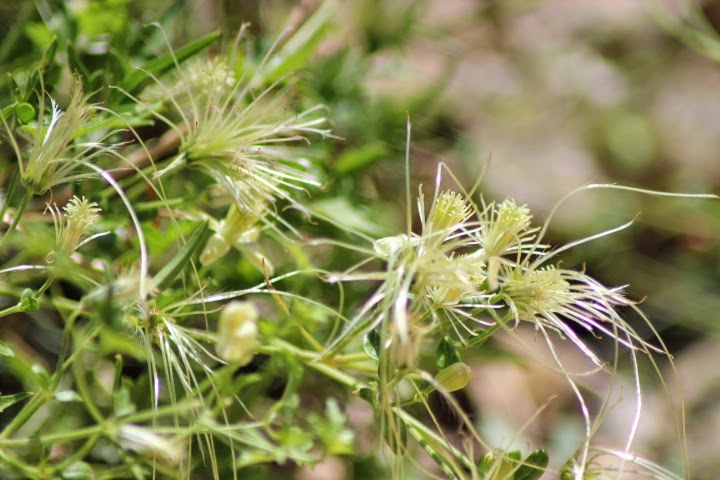 Clematis drummondii is a keeper I'm so glad I gave it a chance.  Gail has a beautiful post on Black-eyed Susans for you this month.
Posted by Shirley Fox at 2:54 PM