Let's face it.  January and February were a gardening disaster this year.  So where are we now?  I'm joining Helen at The Patient Gardener for End of Month View.

February is typically a time of big changes in the garden when we South Texans try to beat the heat with big projects and plant moves.  But February started off gray, cloudy and cold.  Here is the view of the front yard in early February. 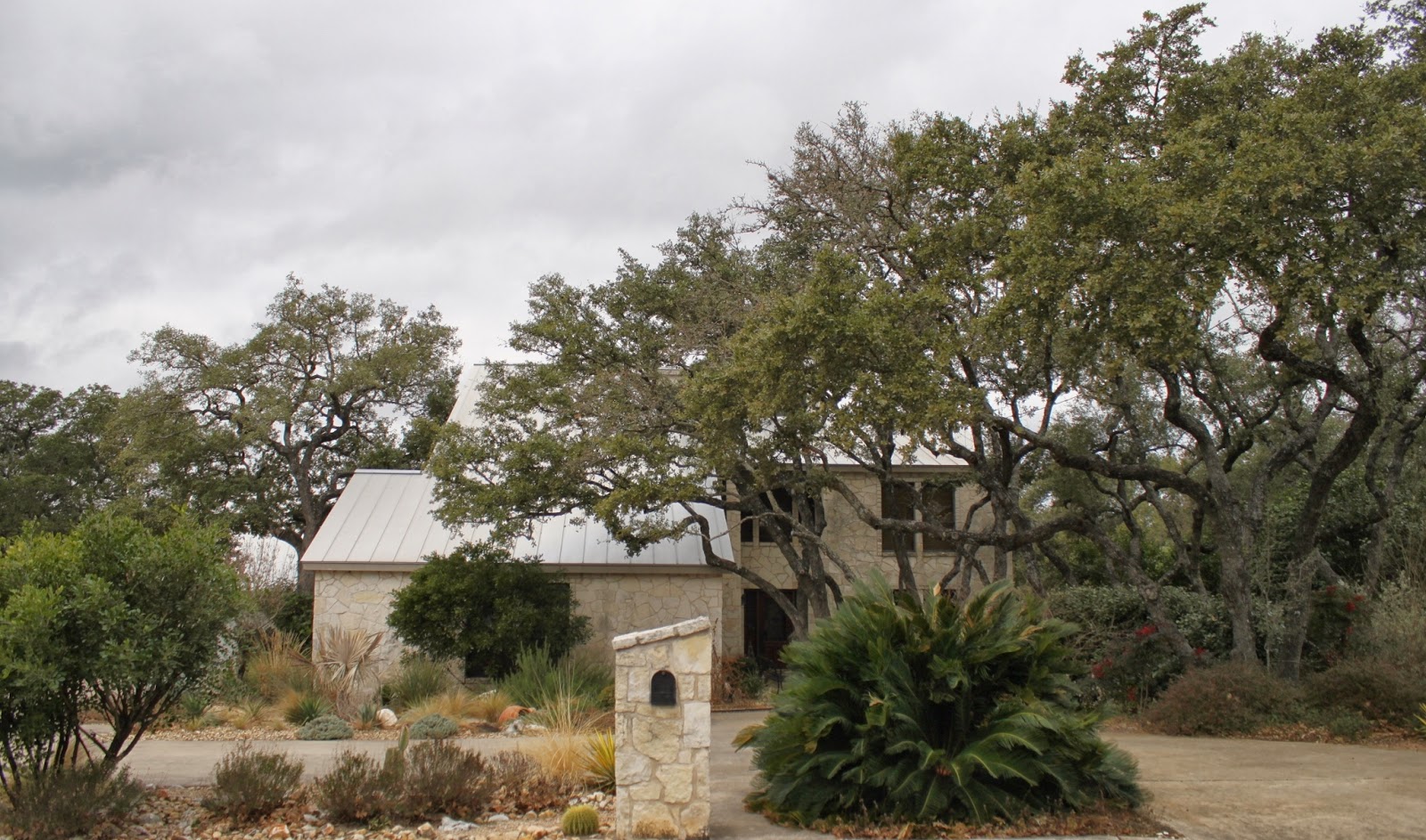 Now at the end of February everything looks much more open with most of the shrubs and plants significantly cut back for spring.  One big project completed in February is the enormous cycad near the mailbox has been trimmed up to clear driveway and walk space, and Lantana 'New Gold' have now been planted under it. 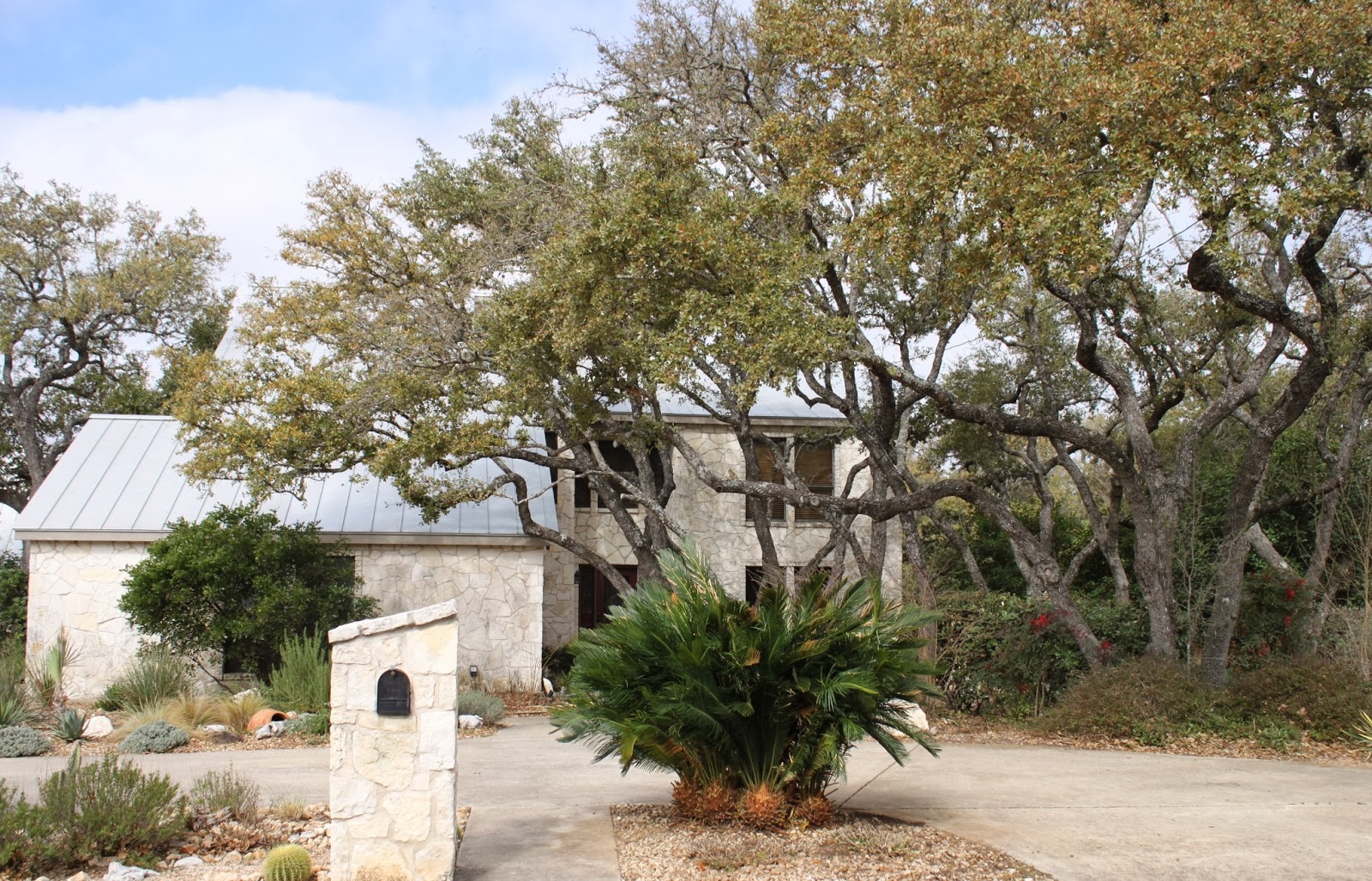 The frozen fronds of the Bismarckia nobilis palm tree (behind the white stone) have been removed and already one frond that had been in waiting is pushing out.  The real test is in seeing how long it takes to produce an entirely new frond.  An agave parryi has been added just behind the row of Color Guard Yuccas to pick up on the silvery colors across the front. 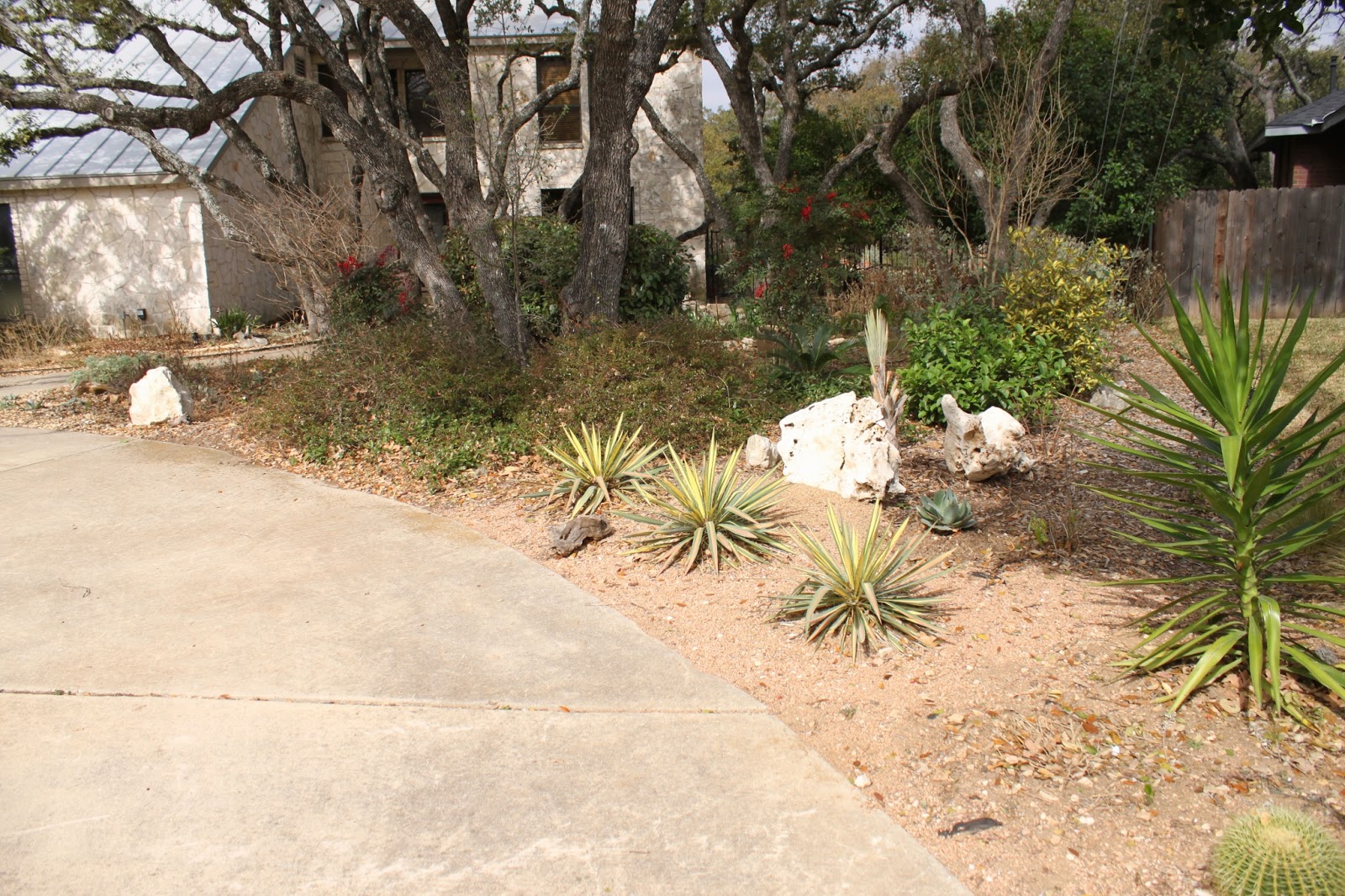 We've been busy moving plants during the few nice weather days.  A big Color Guard Yucca has been moved away from the mailbox to the front of the island bed where it will make an even bigger visual impact and continue the line of yuccas along the circle drive shown above. 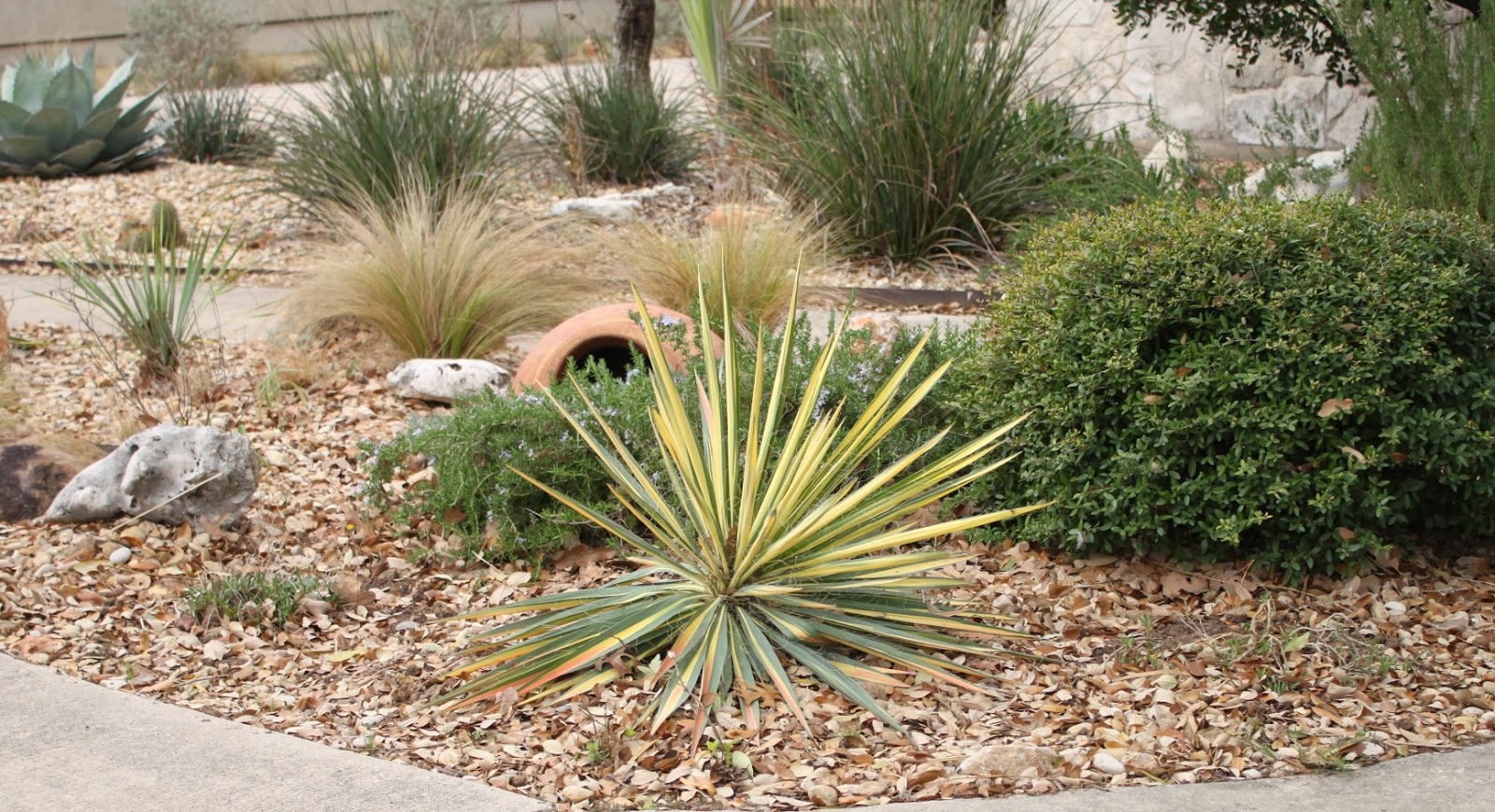 All the Color Guard Yuccas have been moved out of the face planter where they looked good for a couple of years but weren't getting enough sun.  They've been distributed in the island bed to replace the Russian Sage which were marginal performers in this spot.  There's one Color Guard Yucca pup just in front of the sunken pot and another behind the Mexican Feather Grass to the right.  Neal says there may be too many spiky plants here now.  Is that possible?

The other Bismarckia nobilis by the garage is doing rather well considering the tough winter. 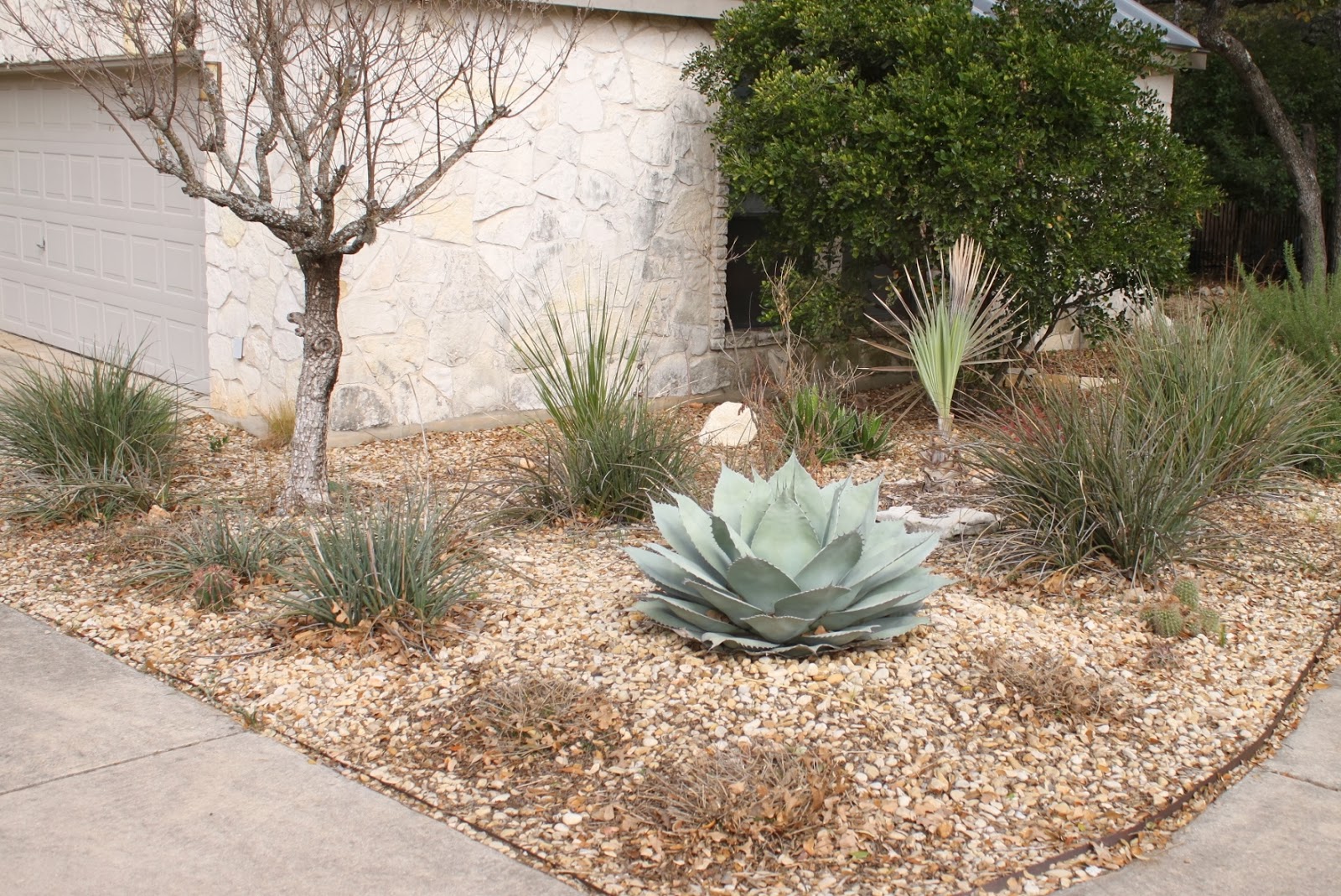 The back garden hasn't changed much through February except we have begun installing a permanent fence around the deer-free zone.  More on the fence in a later post.  Weed removal has left some turned-up spots in the buffalo grass lawn which will be replanted soon. 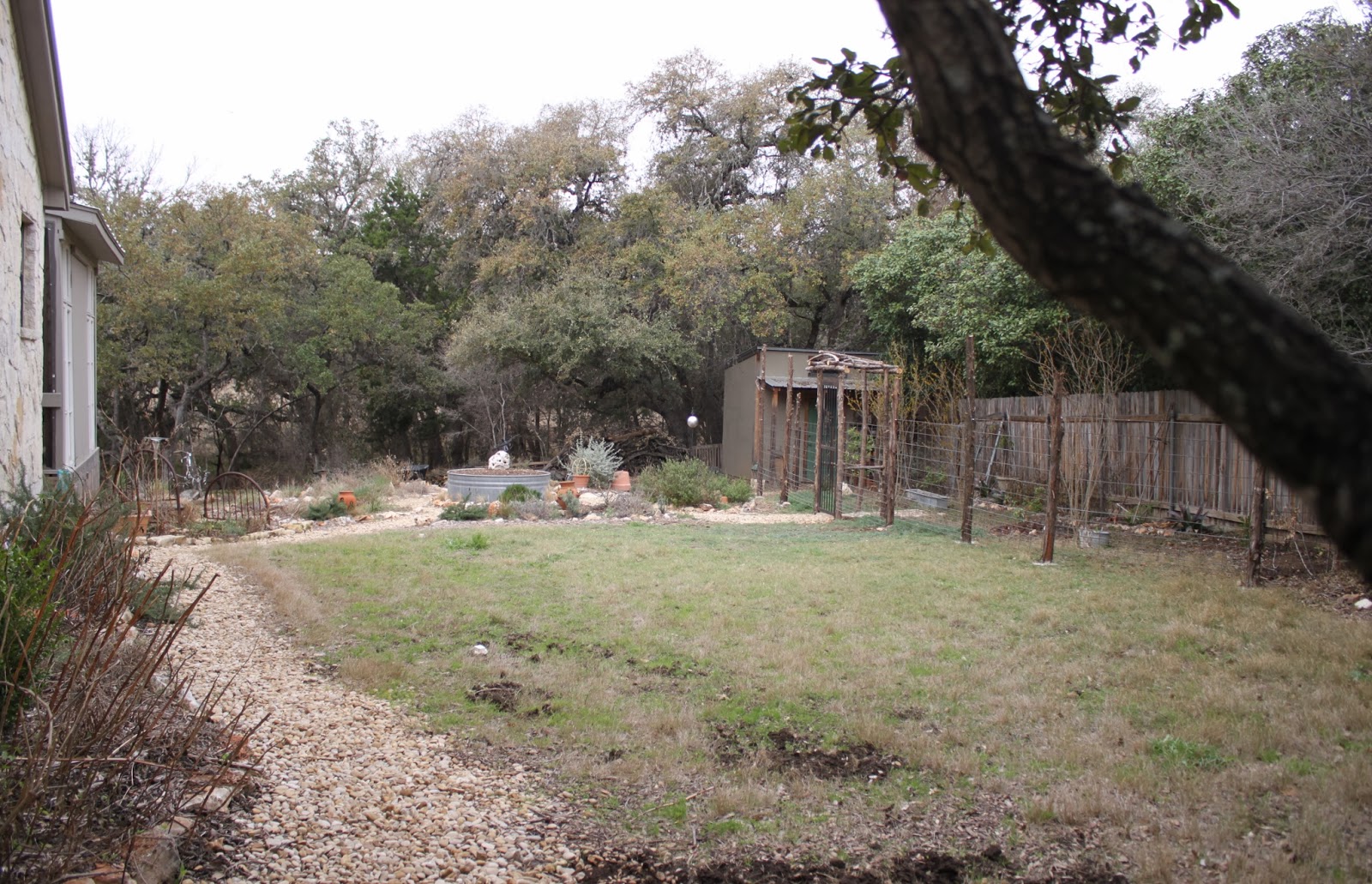 This is about the time I typically show off the gorgeous Mexican Flame Vine in full bloom... 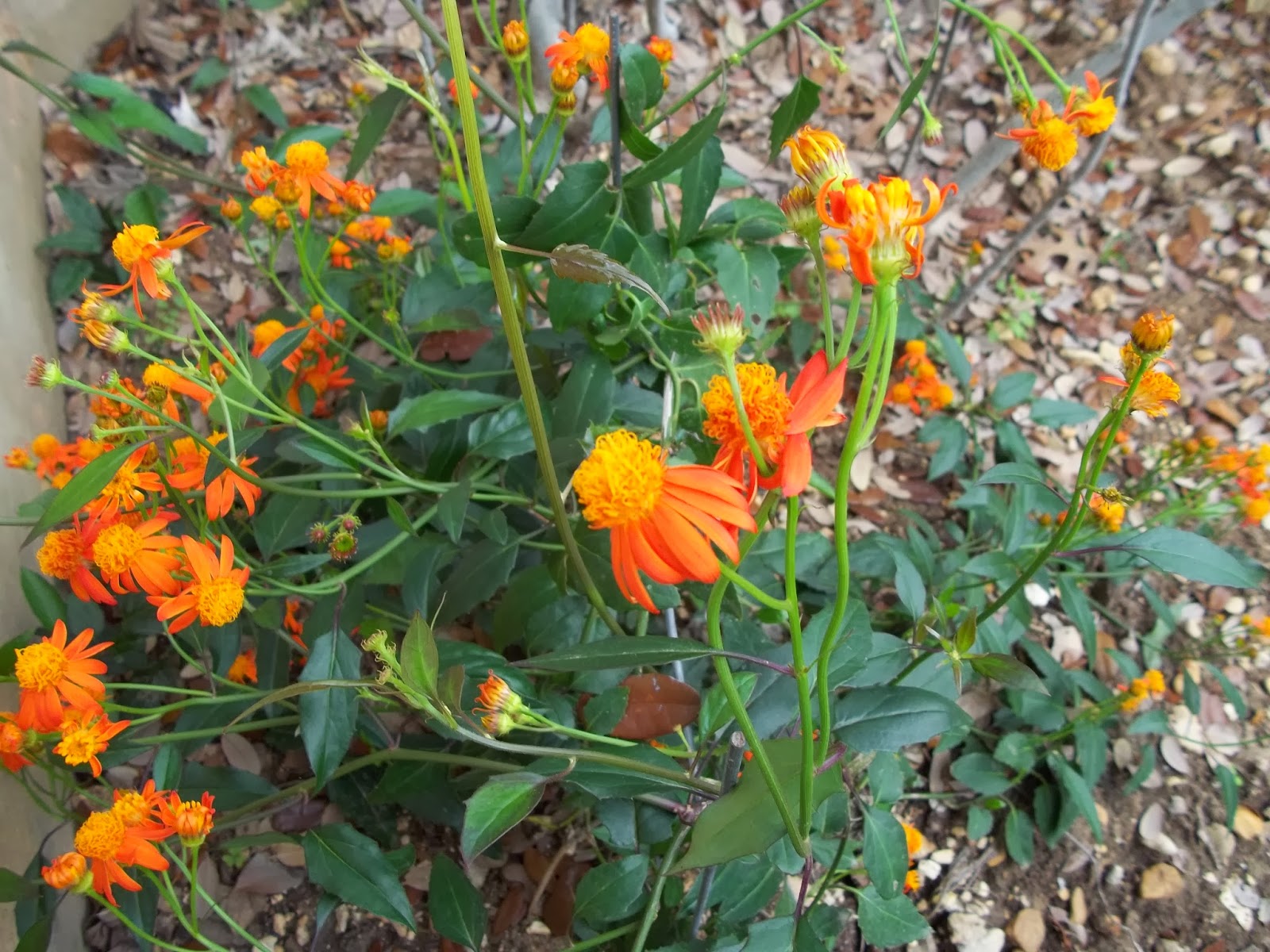 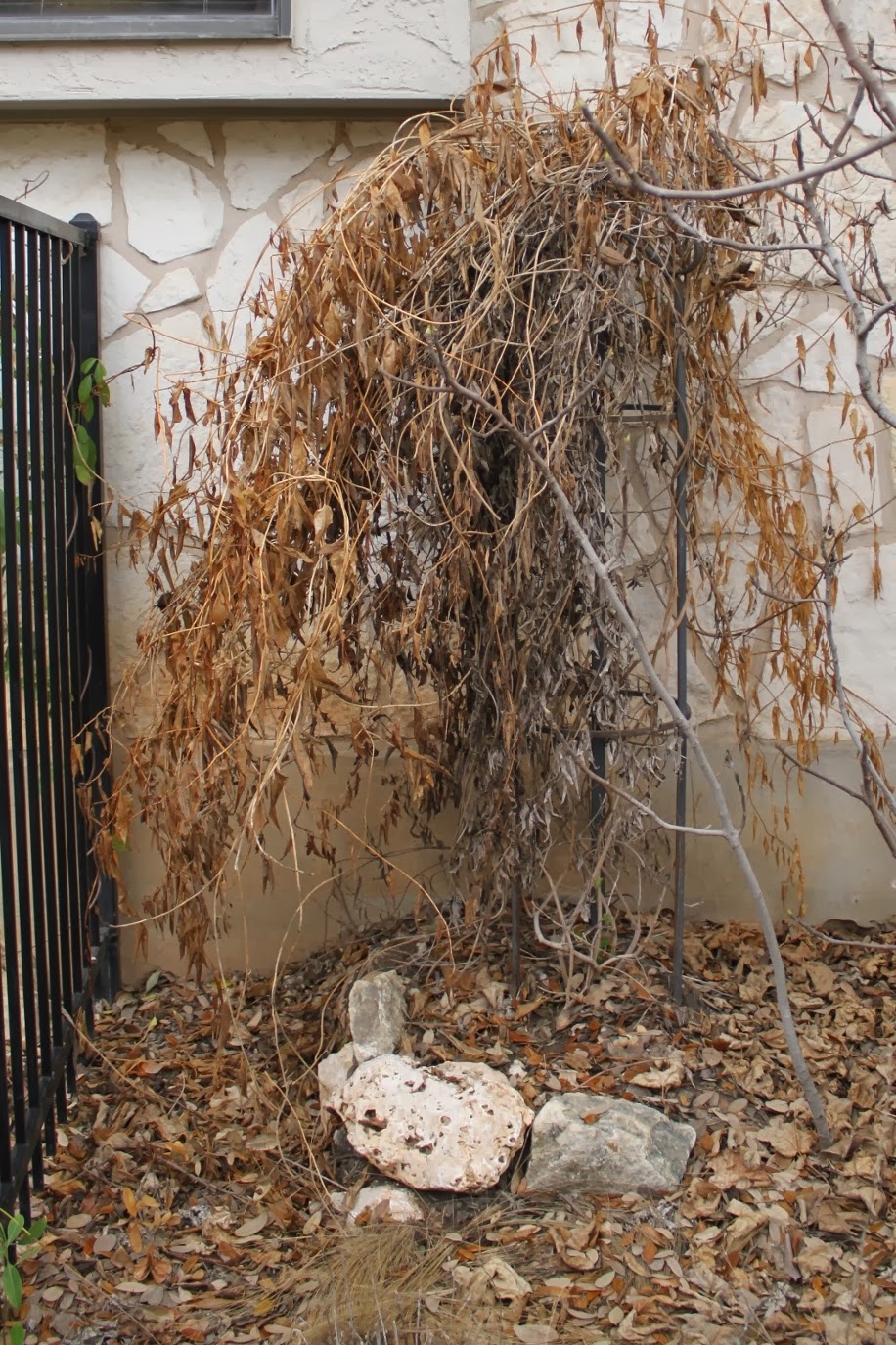 What a difference from last year. 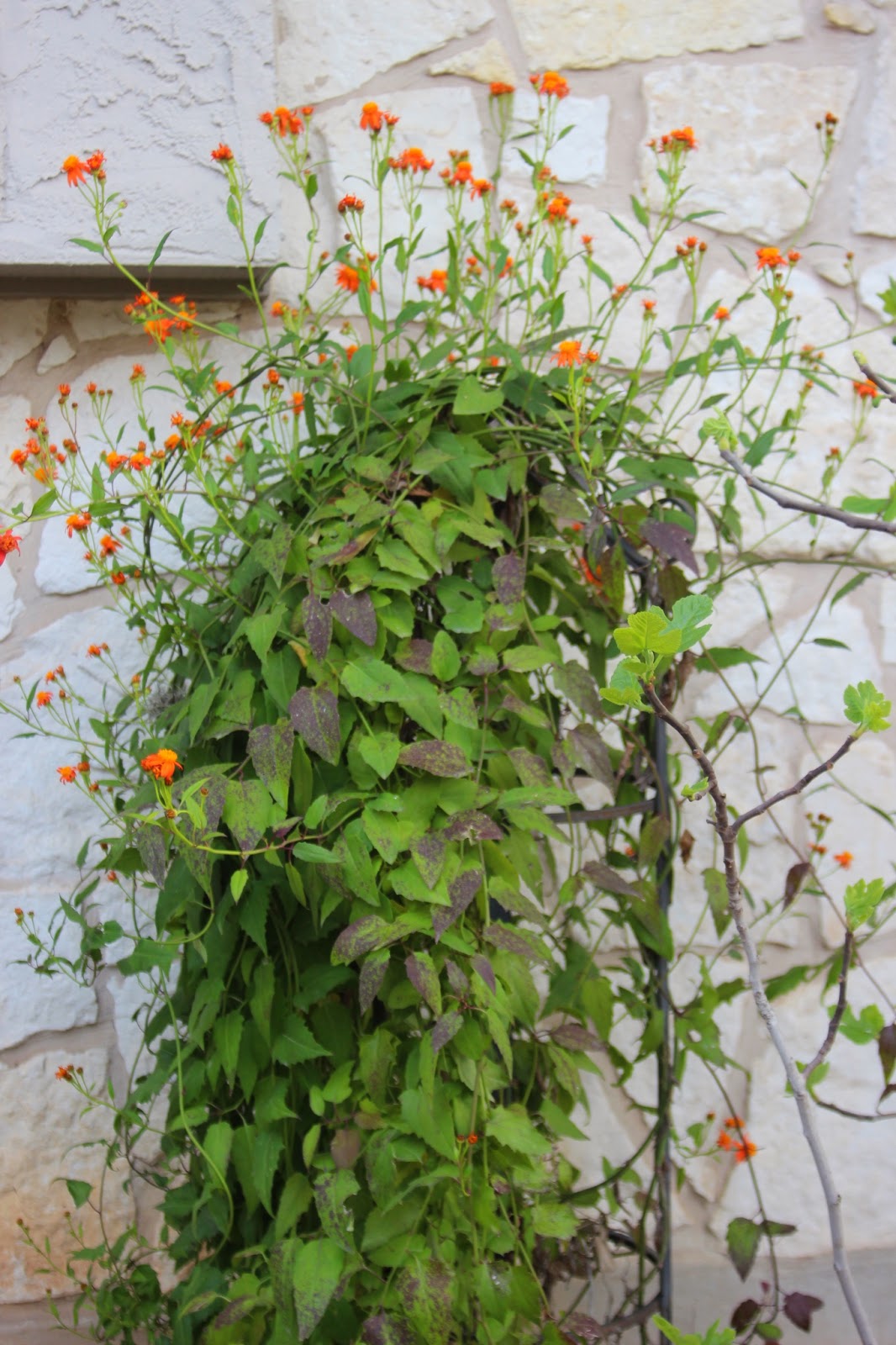 The good news is this borderline hardy plant is showing signs of life.  Considering Mexican Flame Vine should not have survived the 20F low we experienced this is an excellent result and probably due to its location against the south side stone wall.  The old wood will be cut back in a week or so because it's important to leave dead stems through late winter to protect tender perennials against late freezes. Nearby the Agave angustifolia has survived this winter's deep freeze and is growing again. 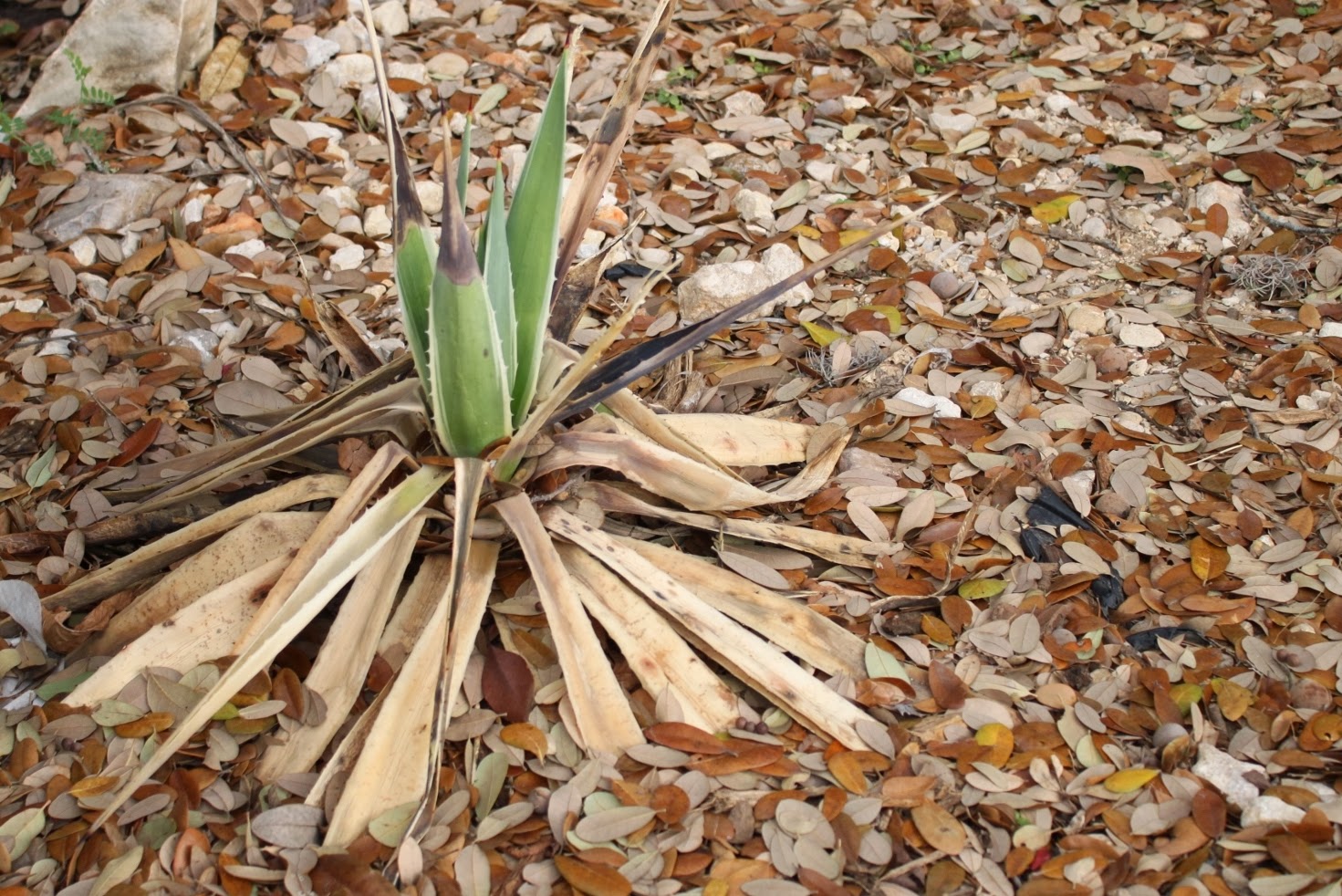 New leaves were hiding under the dead foliage.  This is the only one of four to survive this year. 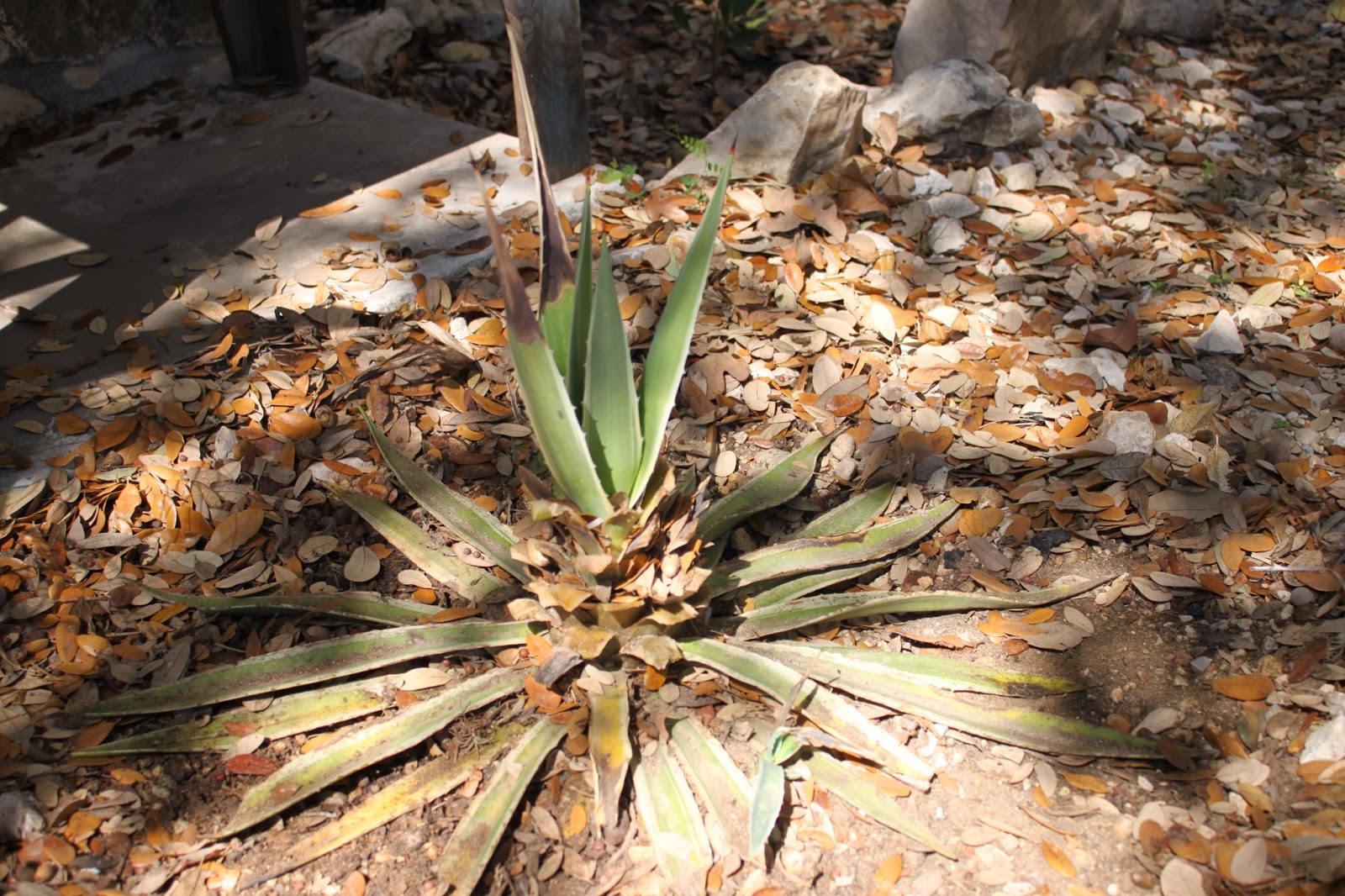 Through the side gate we are enjoying the newly reworked stone path and soon it will be time to plant this area.  The potted plants have been brought out from the garage into the shelter of the trees where they await placement in the garden.  Everything is covered in leaves as our native Live Oaks shed their leaves in spring. 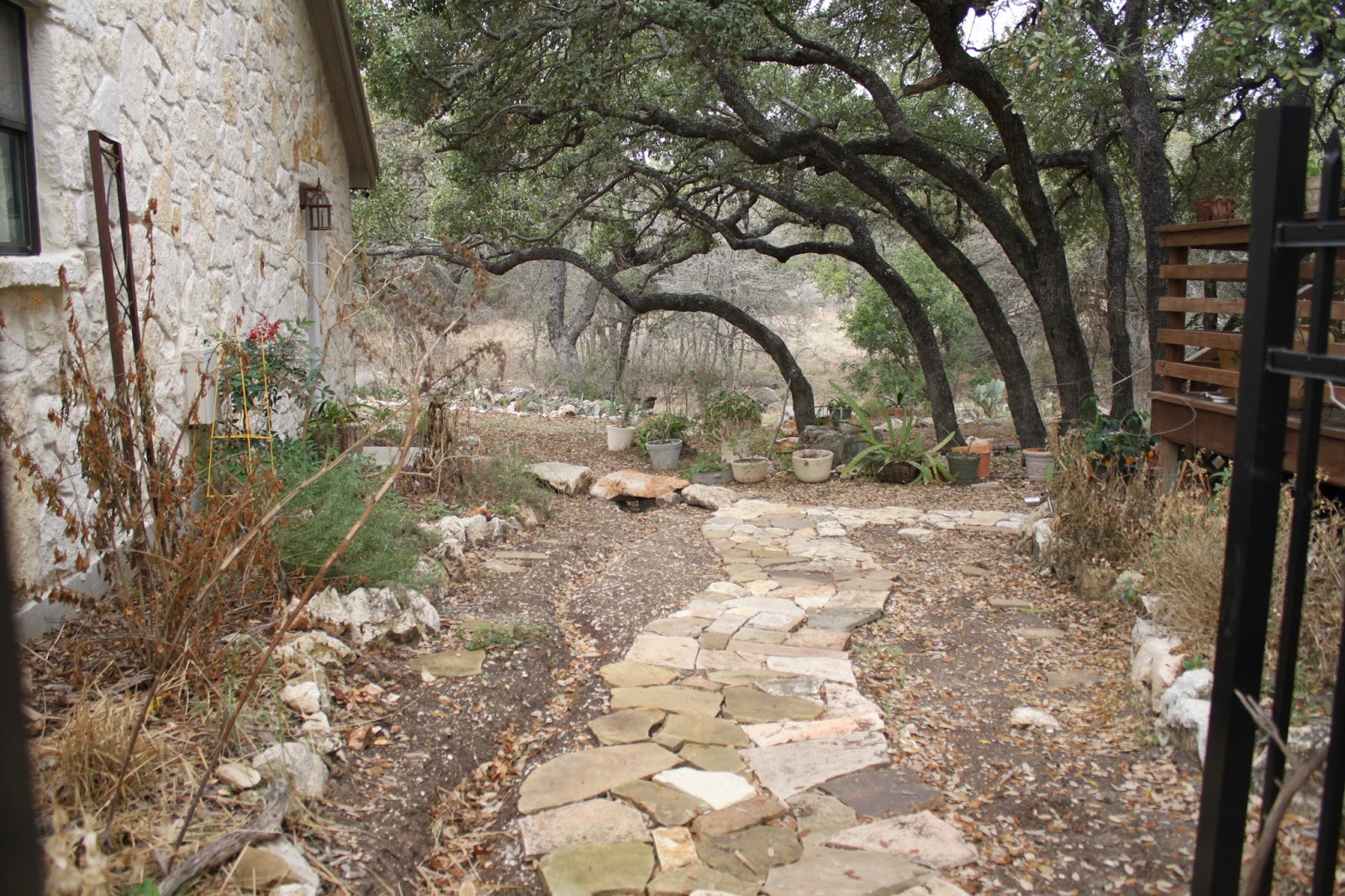 One more light freeze is predicted early next week and then we can turn the page on winter.  Visit The Patient Gardener to see what other bloggers have shared from their February gardens.
Posted by Shirley Fox at 10:14 PM