Re-gardening: From This to That and Then Another

I do a lot of re-gardening by working and reworking spots that have already been planted.  There's an area near the front walk that has been a gardening challenge.  At first I thought it should be a perennial bed and planted it with white blooming plants and silvery Artemesia.   The blooms were sporadic and some plants didn't bloom at all as the trees grew out, shading more of the bed in summer.  The deer often ate the dwarf Ruellia down to the ground and the whole thing ended up looking jumbled as the plants bloomed at different times.

This was the one day in three years it looked good just before the deer decimated it once again. 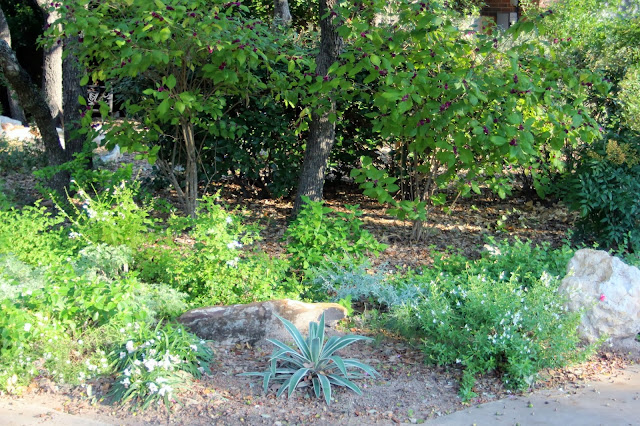 As a prominent spot by the walk to the front door I wanted it to look good all year. 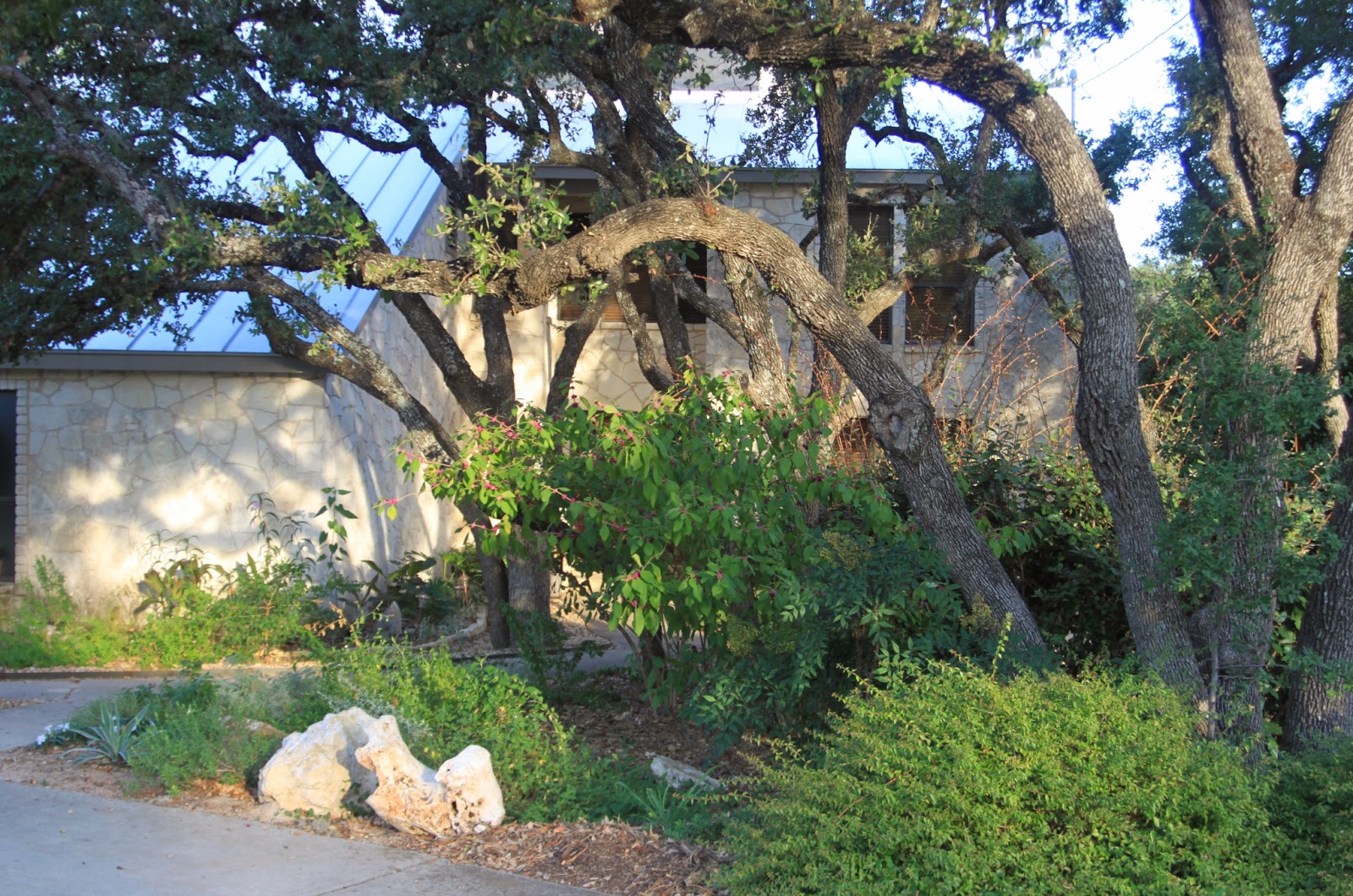 The bed needed something more interesting and definitely more pulled together.  These Agaves set in Berkeley Sedge in Christy Ten Eyck's Austin garden caught my eye. 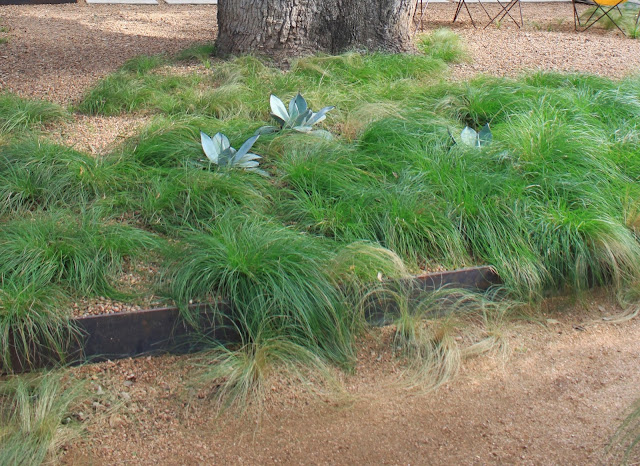 I also like this bed with Silver Ponyfoot in the Mt. Bonnell garden designed by Curt Arnette also in Austin. 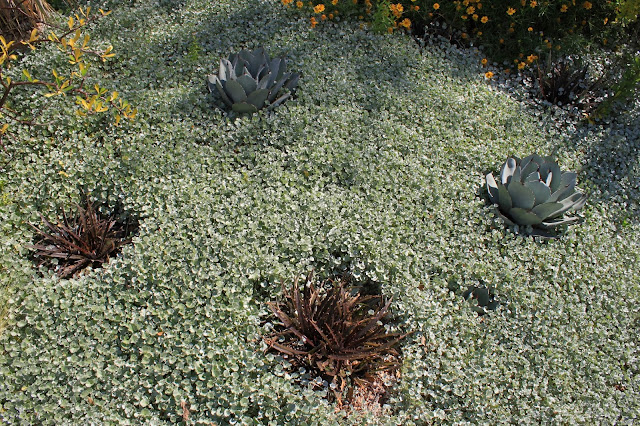 While the Silver Ponyfoot looks good, I decided to try something different.  I planted Agave victoria-reginae along with Berkeley Sedge and Wooly Stemodia hoping to see which of the two choices might work out best.  The Berkeley Sedge promptly turned brown and struggled in an early spring heat wave followed shortly thereafter by the drowning of several Wooly Stemodia plants during a 10" rainfall one morning in May.  When Pam Penick stopped by in June it was looking quite sad. 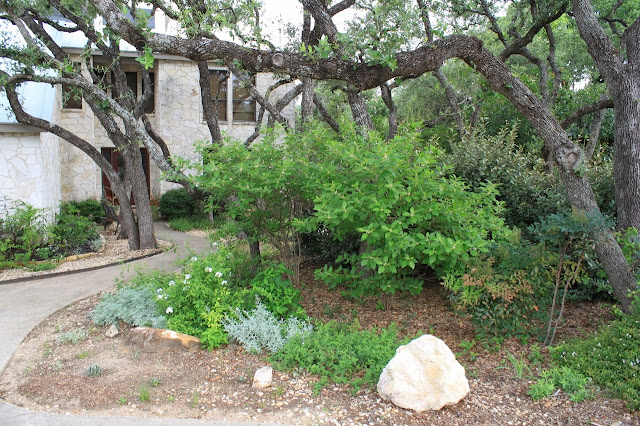 Clearly another plan was needed.  I looked to the nearby island bed for ideas and decided on Creeping or Prostrate Germander, a silvery gray plant that can take blasting hot sun or shade and won't drown in heavy rain.  This Germander has been here through four years of drought, freezes, floods, and heat waves and it always looks good. 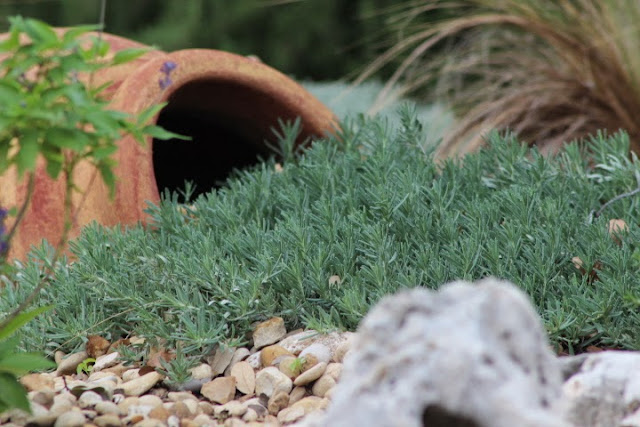 The white Plumbago is the best continuous bloomer of the original plants so I added more where the underperformers were removed. 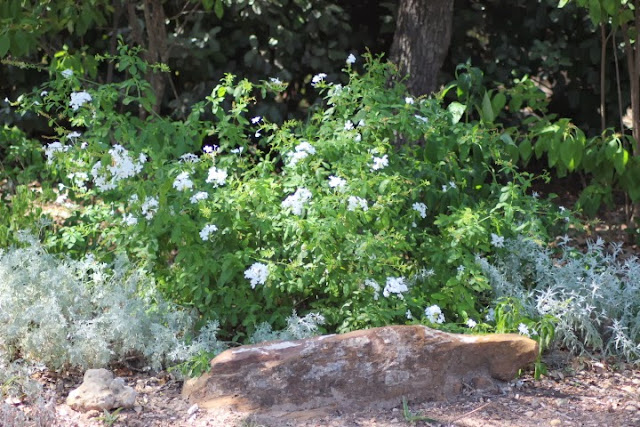 Most of the perennials were removed while white lantana remains on either side of the Plumbago along with several varieties of Artemesia.  I added cold hardy agaves and tossed in some mulch to cover the ground because I wasn't sure I wanted to add more gravel in the front yard.  We do get bored with the idea of rocks in the yard and if you've ever moved gravel around you know you want to be double sure it's going to stay where you put it for a while!  This is the way it remained until October 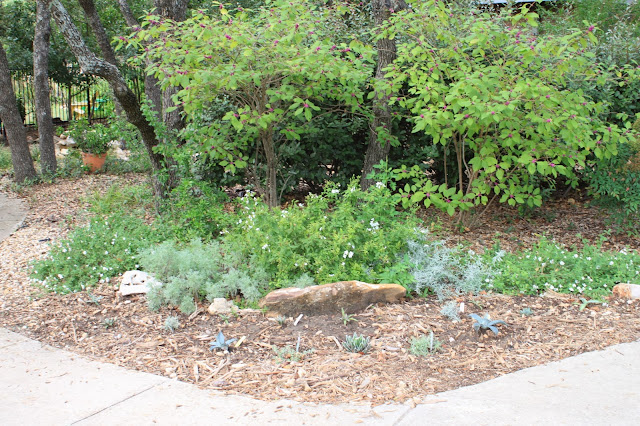 By October I decided it was going to be a while before the germander filled in and gravel was the best way to tie the two areas together across the walk.  This photo shows why continuity across the walk is needed. 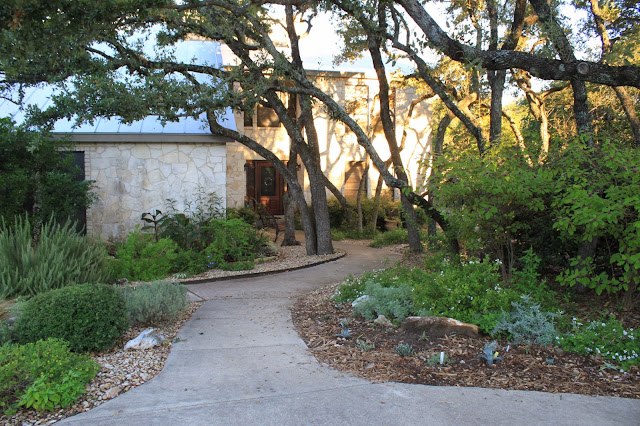 In October we finished it off with gravel. 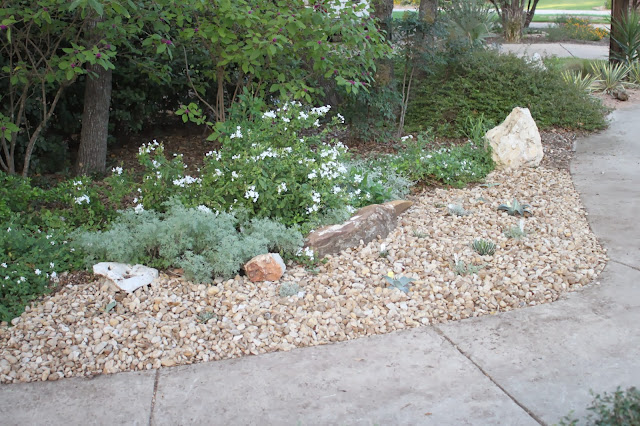 Now the three beds at the sidewalk junction tie together much better.  The photo below taken this week shows how it looks in winter with the silvery plants standing out.  In previous years the perennials died back leaving the area empty most of the winter. 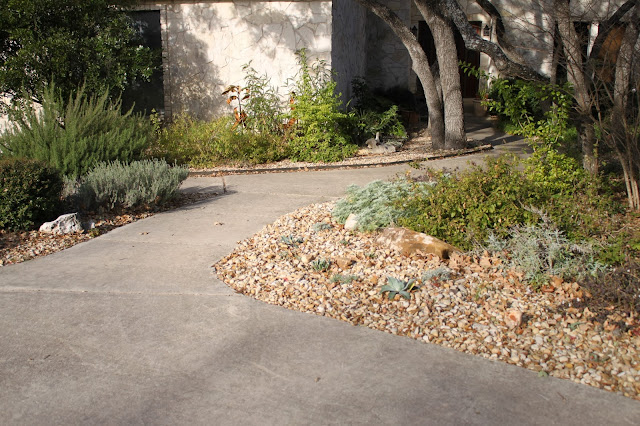 The two sides relate better across the walk and make a better transition from the sunny to shady areas of the garden. 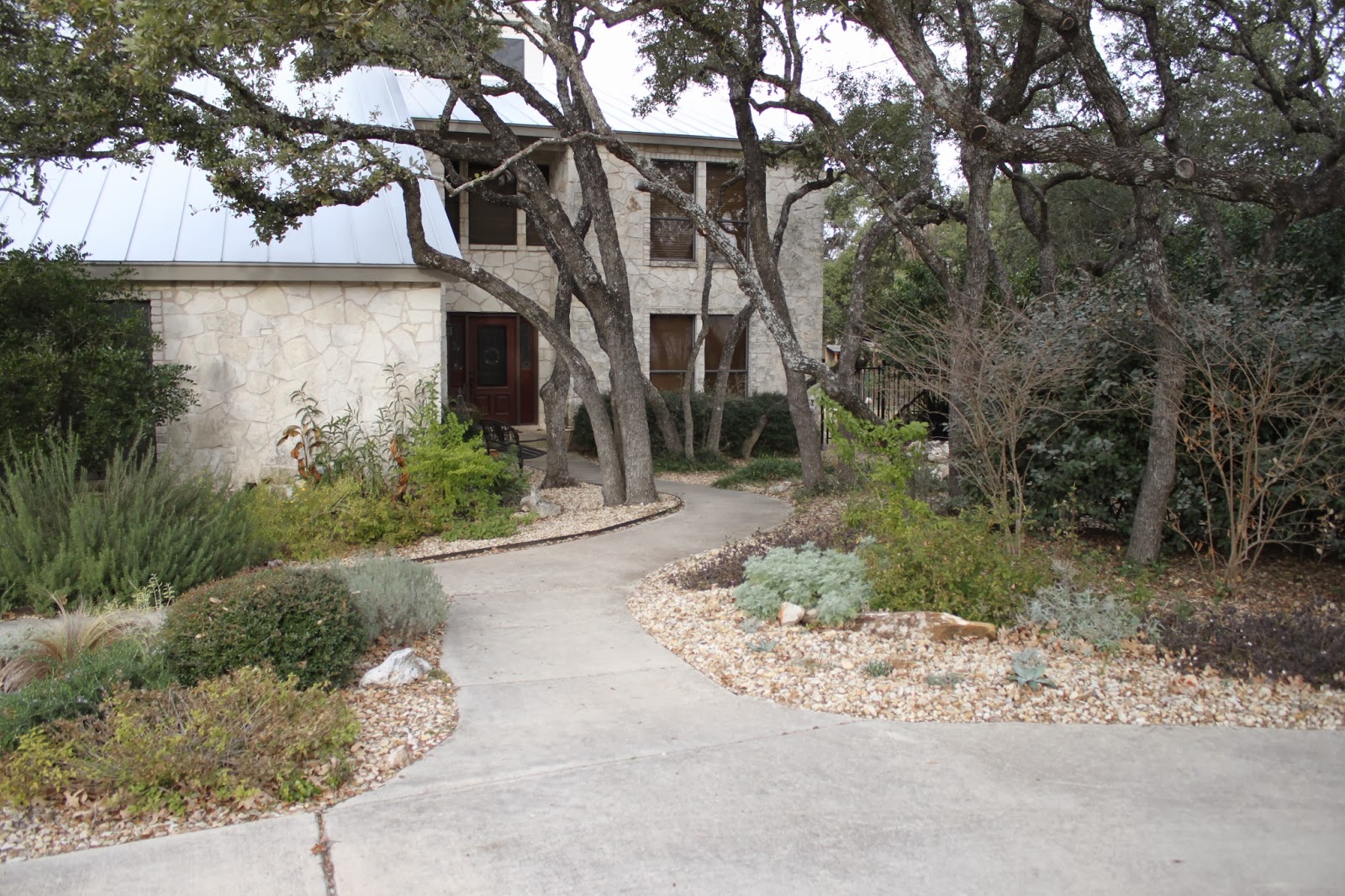 The Germander will spread and cover the rocks over time. 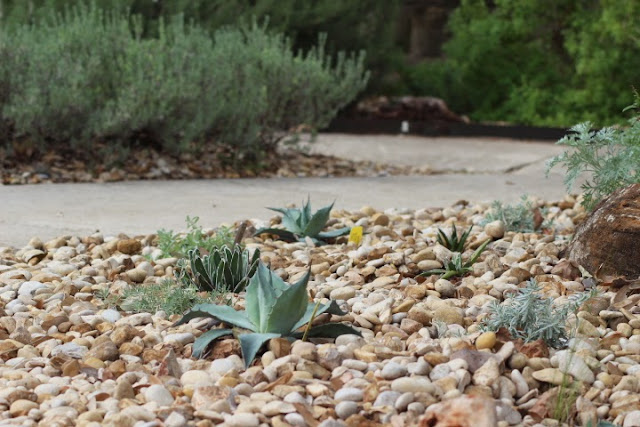 Next spring and summer this will be a better welcome for our front garden. 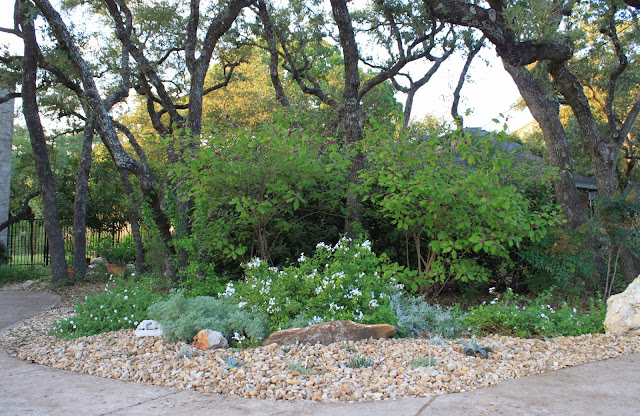 From this to that and then another version is all part of re-gardening until it looks right.  This will be so much better, especially after it grows in.  So it should stay like this for a while until it shows me where the remaining tweaks can be made once the plants mature.
Posted by Shirley Fox at 9:13 AM