The final garden on the Garden Conservancy Open Days Tour is the garden of Jeff Pavlat and Ray Clayton. A very special finale it was.  Jeff is an avid collector of cactus and succulents and currently Vice President - Education for the Austin Cactus and Succulent Society where he has also served as president.

The impressive garden terraces designed and built by Jeff and Ray are the first feature to greet visitors, and lead down the hillside from the street to the house. 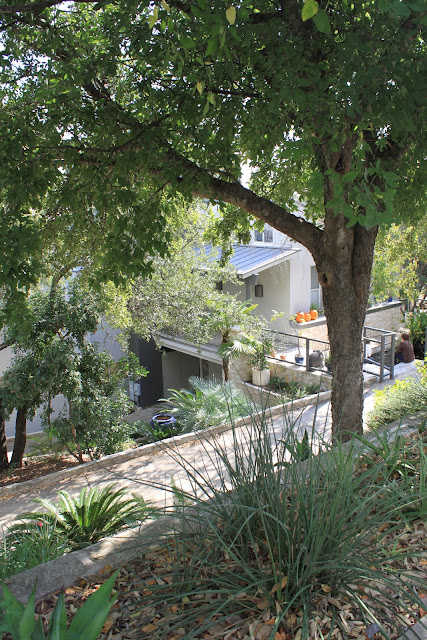 This is a collectors garden, and very well done one at that.  I have seen this garden profiled several times on Digging and was very much looking forward to seeing it in person.  An exceptional collection of aloe, hesperaloe, yucca, palms, cactus and more in a beautifully designed setting. 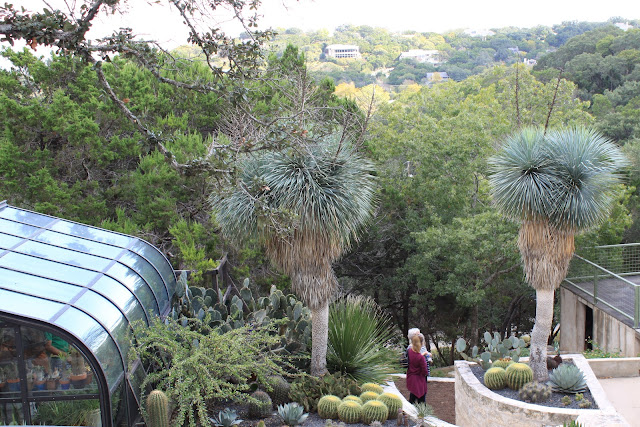 Beautiful plant arrangements with aloes and agaves in the terrace planters along the driveway. 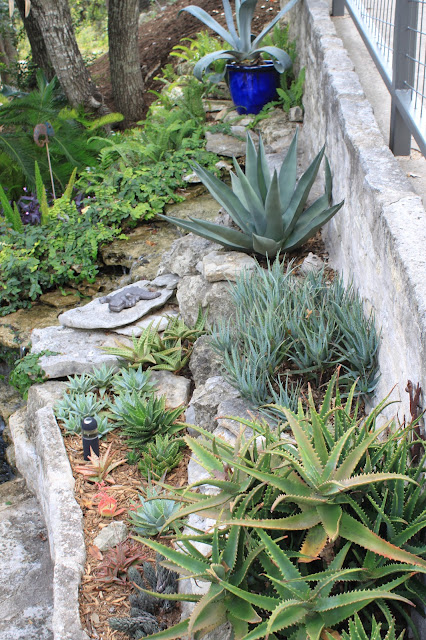 Looking back up toward the street


Jeff makes extensive use of containers for his collection, and this blue one is used as an accent among the cycads and palms in this bed.


A view of cactus and yucca above the fence-lined driveway. 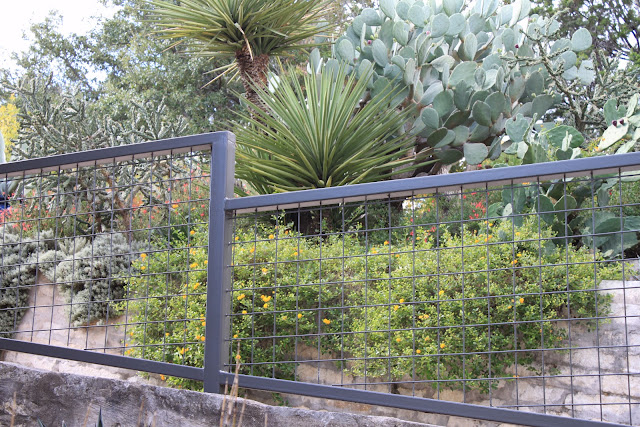 Along the deeper sections, the terraces really stack up. 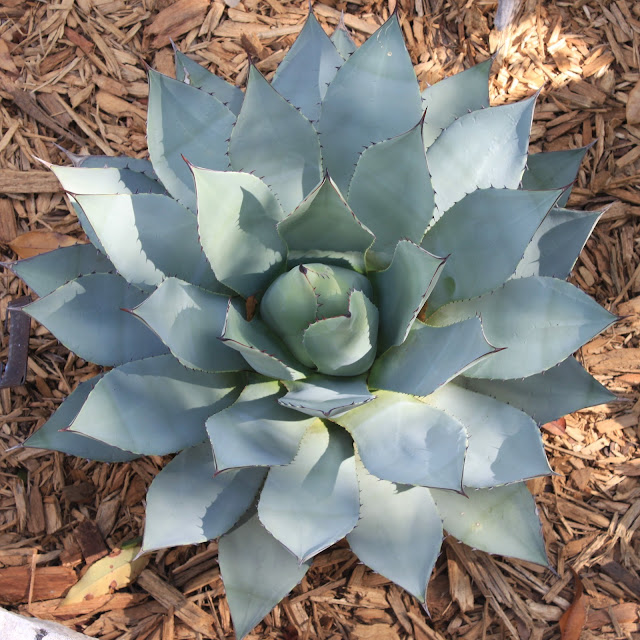 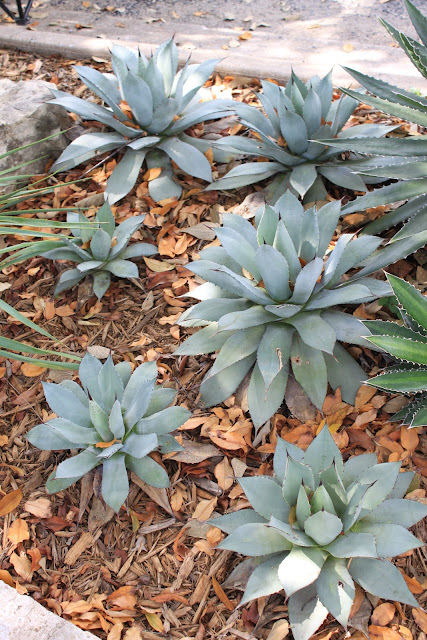 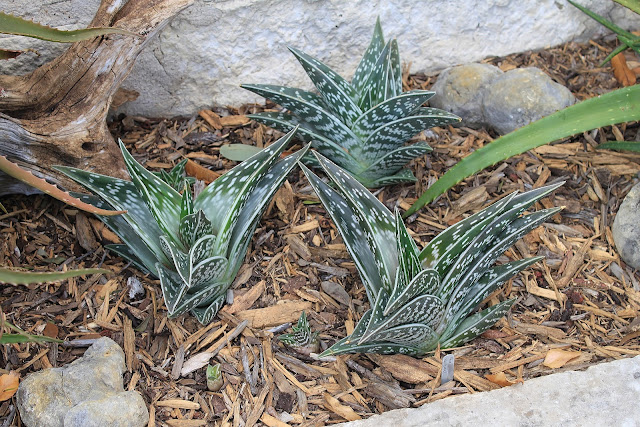 Golden Barrels abound.  Most of the areas are covered in bark mulch. 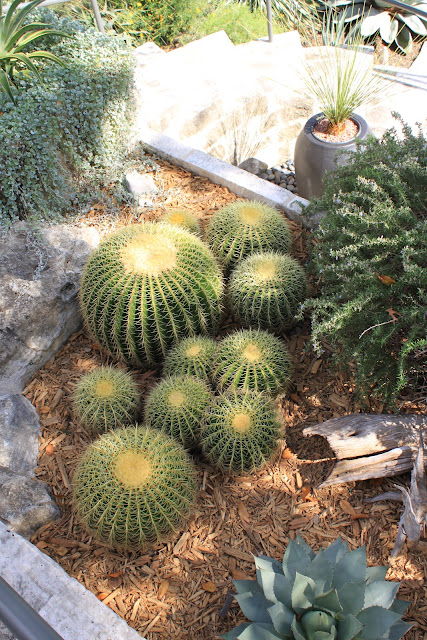 A few areas are mulched with dark gravel.


Golden barrel cactus at street level peeking over the terrace wall at aloe in bloom. 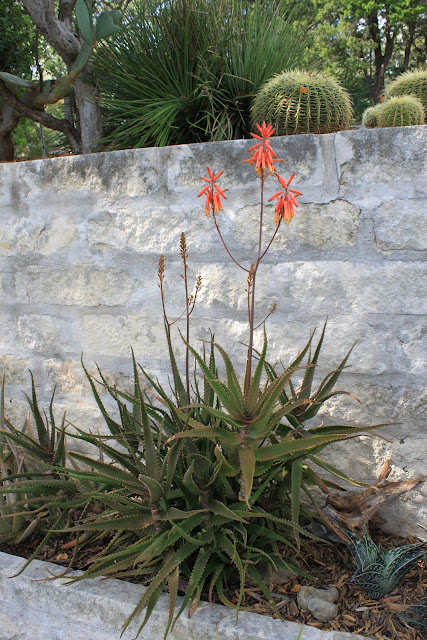 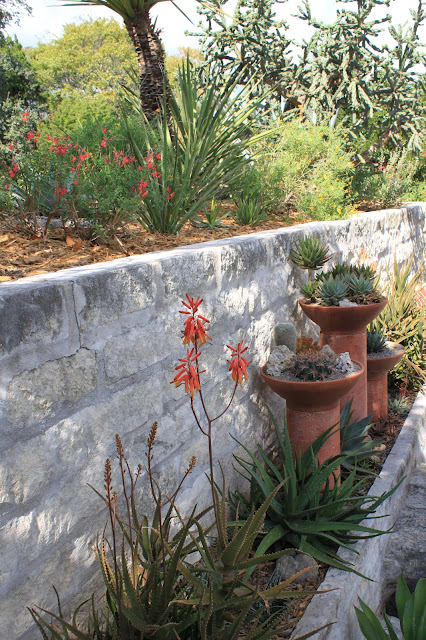 Terracotta planters on concrete pedestals which I have no plans to borrow for my own garden--Not!  I'm definitely going to steal this idea and copy it in my own garden. 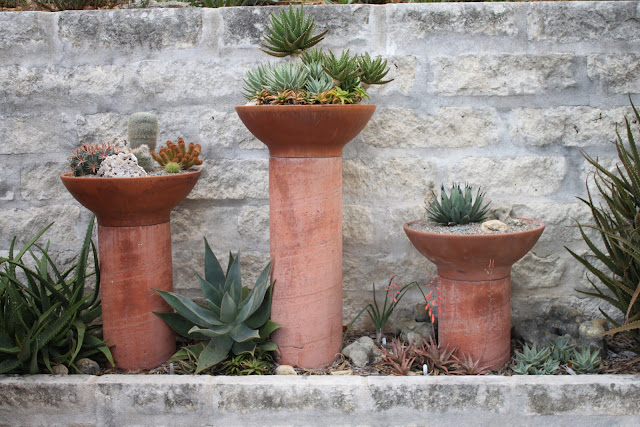 Closeups of the planter arrangements.

Another design idea is this stone fountain and gravel layout on one of the terraces just down from the street. 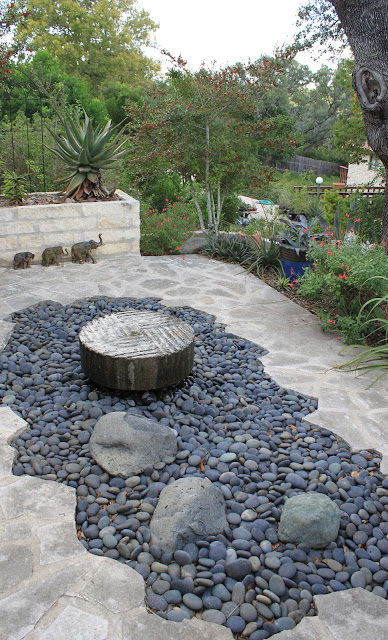 Nice vignette in the corner of the fountain terrace.

View of the greenhouse from the terrace 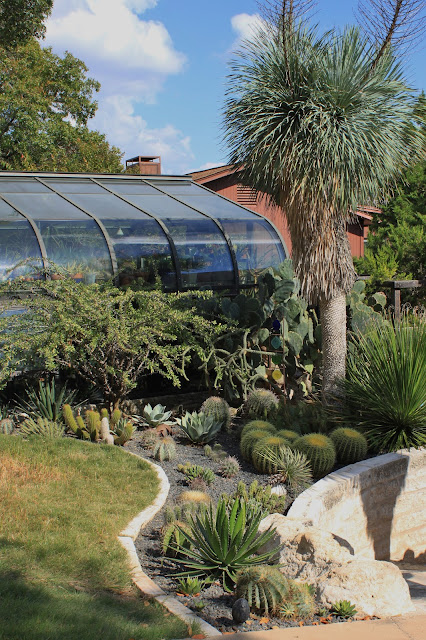 The greenhouse contains Jeff's collection of non-hardy cactus from around the world. 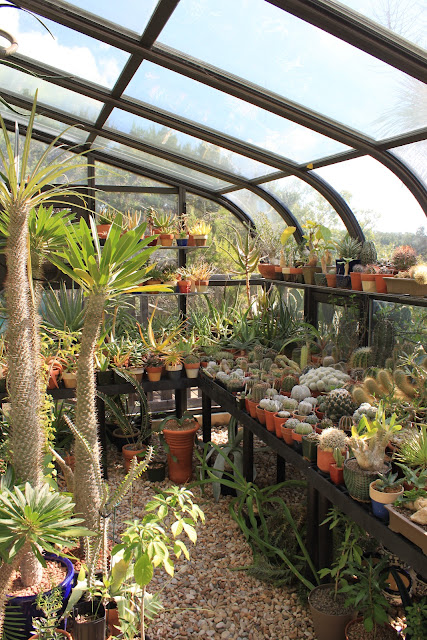 Over by the front of the house is a large Koi pond, one of the first elements completed in the garden. 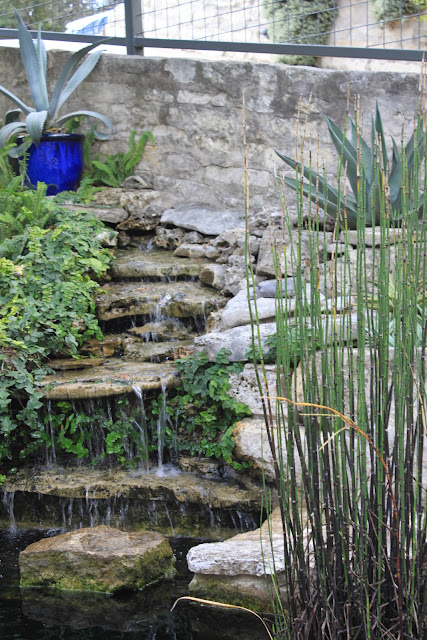 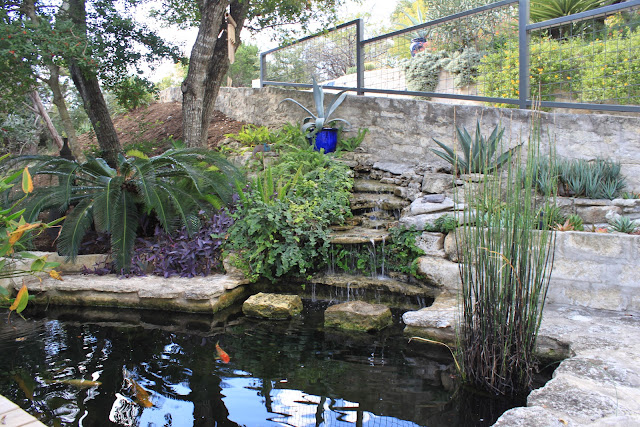 The front walk--we were there just after Halloween.  I smiled thinking of the effort it takes for Trick or Treaters to collect their candy here. 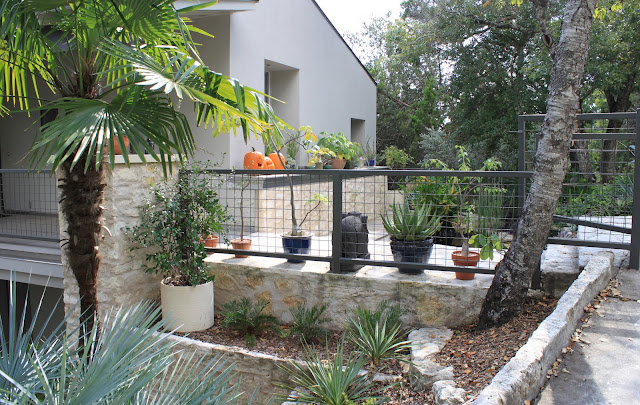 I listened in on some of Jeff's discussion with visitors.  He does cover many of these plants and moves the containers in the greenhouse when a freeze is predicted.  Like most of us, his collection suffered losses in the deep freeze of 2011 when we experienced 70 hours below freezing.

A few more details from the garden 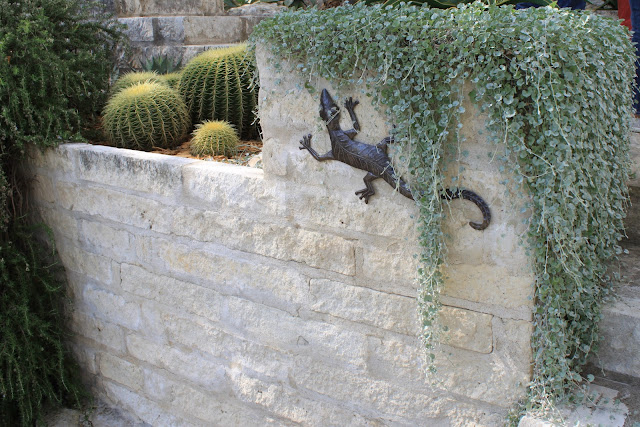 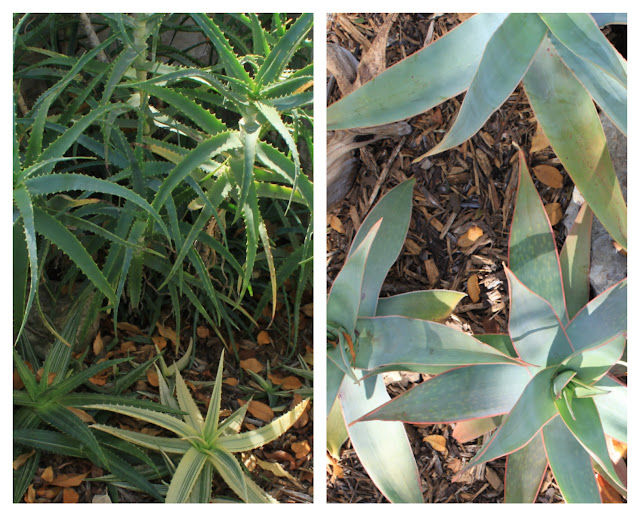 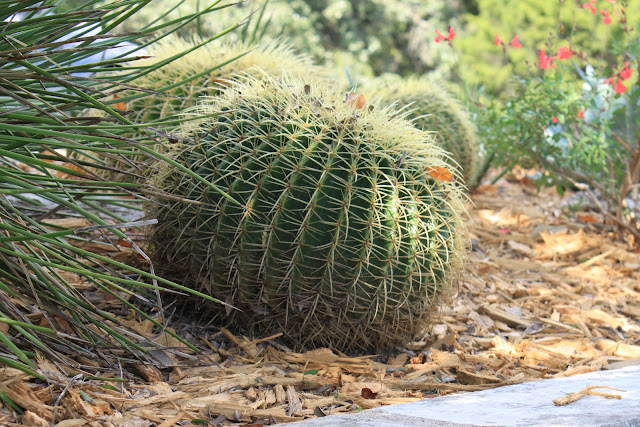 An incredible collector's garden to experience.

I thoroughly enjoyed The Garden Conservancy's Open Days tour in Austin with the Austin garden bloggers and these beautiful gardens.  Our group included Pam of Digging  (check there for more details and the local Austin scoop on many of these gardens, Jean of Dig, Grow, Compost, Diana of Sharing Nature's Garden, and Catherine of The Whimsical Gardener.  I very much enjoyed meeting them for the first time and spending the day touring six special gardens in Austin.
Posted by Shirley Fox at 10:06 AM