The Watersaver Landscape tour held in early October included the Olmos Park Terrace Community Garden which is part of the Green Space Alliance of South Texas. 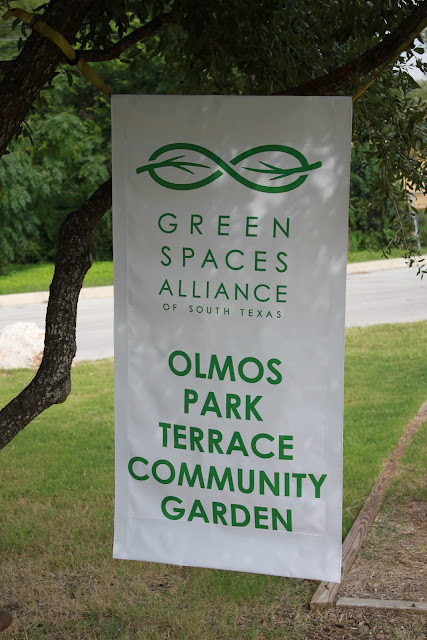 The garden is in a triangle-shaped park in the heart of a 1930's neighborhood.  Gardeners tend assigned plots which seemed to be about 4' square.


Vintage touches had been added to some of the plots 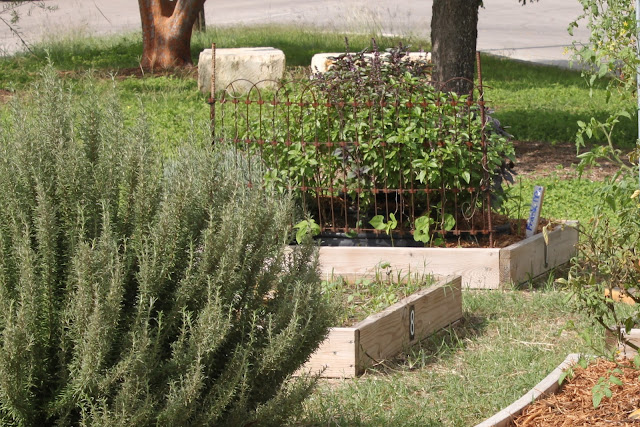 What are those ceramic pieces in the plots? 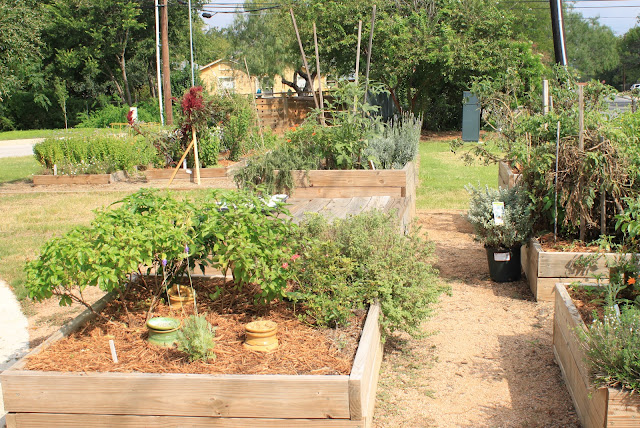 They are called ollas (pronounced oh-yahs) which is the spanish word for pot.

The tour provides a glimpse into gardens and watersaving ideas for landscapes around the city and some of these watersaving ideas are based on old concepts.  One new/old idea are these ollas which are unglazed terracotta pots in use at these community gardens. 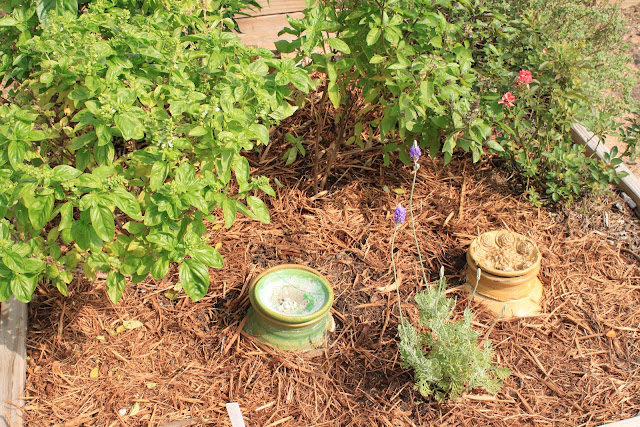 When the olla is filled with water, it will slowly seep out through the porous surface depending on the needs of the surrounding soil and water the garden.  This technique has been used since at least the 1st Century BC in China.  The system was used by Native Americans in the arid southwest as well.  Because the water flows as needed it does save water and plants don't wilt as quickly.  I was interested to see ollas in use because part of my garden has limited access to water and ollas could be a good solution.

Most of the garden plots had four ollas, I loved the colors and detail on these. 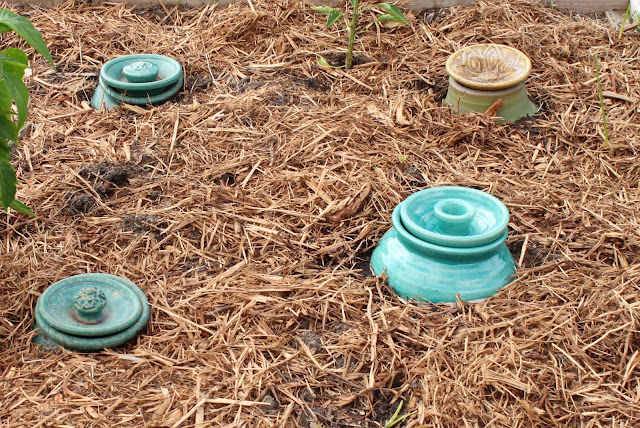 The ollas on display here were nicely made with artfully designed lids. 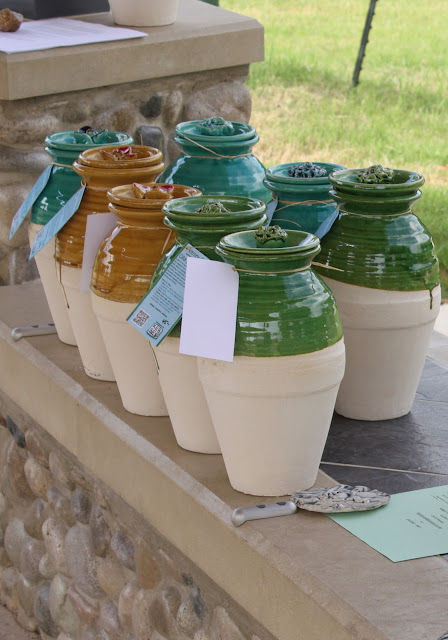 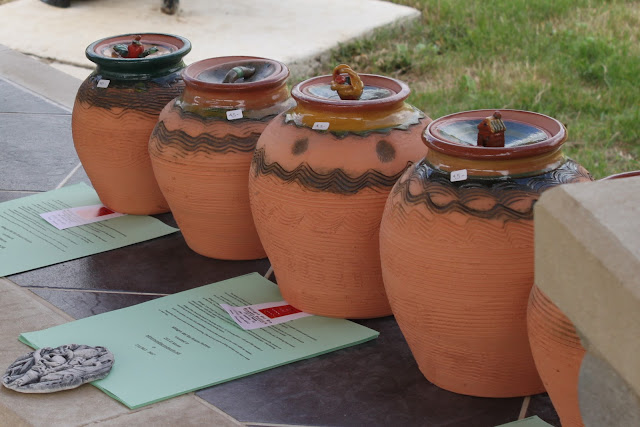 Great finials on this compost bin.  Since there is no fence I'd worry about this stuff walking away. 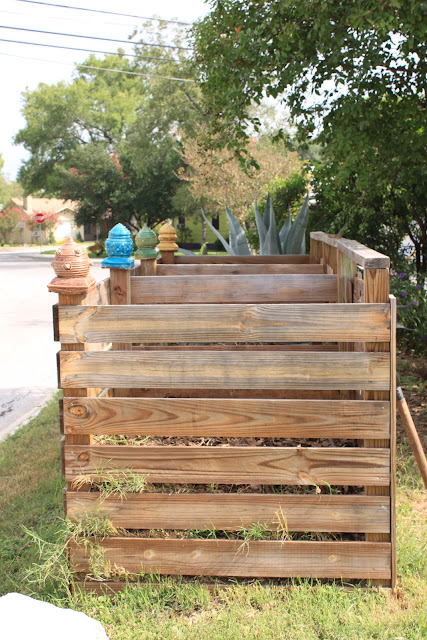 For those of you who are here for the spiky plants, this is a closer look at the agave behind the compost bin. The purple flowers are Ruellia and there's a crape myrtle on the left and Texas Mountain Laurel to the right. 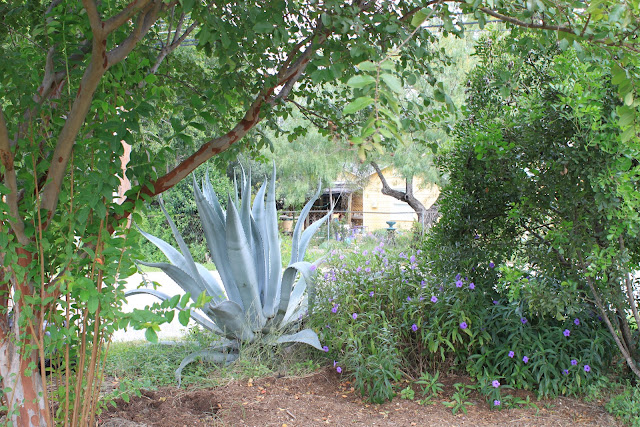 I came away with a possible solution to one of my gardening problems.  In researching this post I found a link to an idea for a low pressure drip irrigation system based on ollas that also might work for my own garden out by the shed.  There are also instructions online for making inexpensive ollas for your own garden from terracotta flower pots.

You can take a look back at the Alamo Heights garden featuring great native plants which I posted previously from the tour.   The tour is sponsored each year by the San Antonio Water System (SAWS) to promote waterwise landscaping around the city.
Posted by Shirley Fox at 9:22 AM