We were invited to an evening reception in the McNutt Sculpture Garden at the Briscoe Western Art Museum.  The event was sponsored by San Antonio Water Systems (SAWS) and we made a point of arriving early to take advantage of the light. 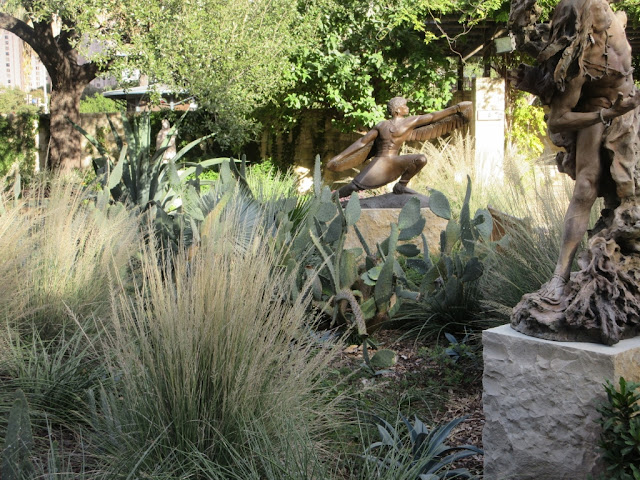 The courtyard incorporates an ancient access pathway to the San Antonio River so it's open free to the public during museum hours but is usually closed in the evening and early morning making this quite a treat to catch native Lindheimer muhly grasses grazed with the sun's last rays of the day. 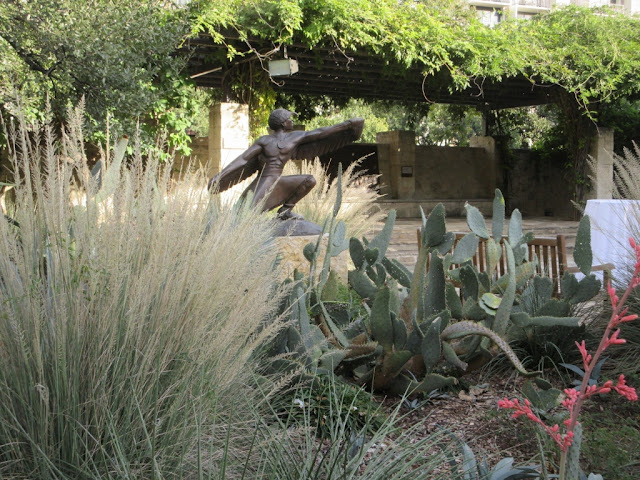 The "golden hour" for photos as one of our SAWS hosts put it when she welcomed our early arrival. 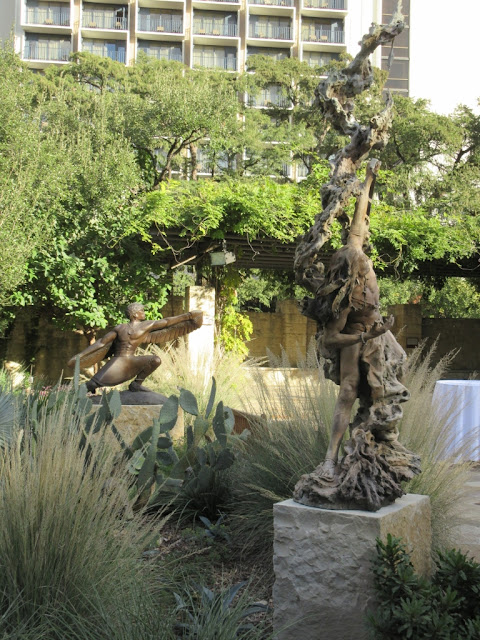 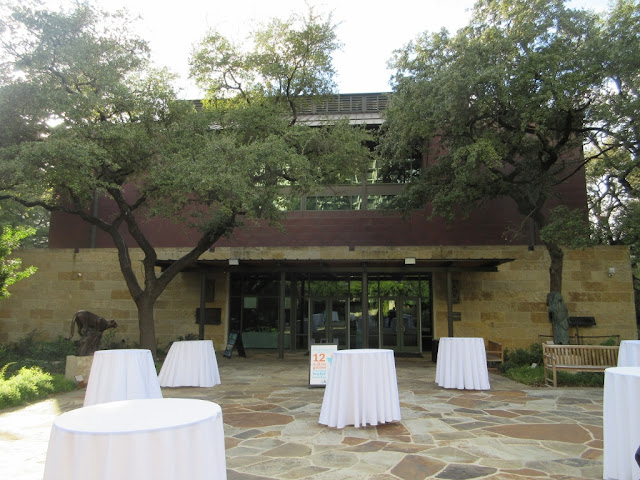 Another excellent Lake|Flato and Ten Eyck collaboration in San Antonio and it's been on my must-see list for a while. 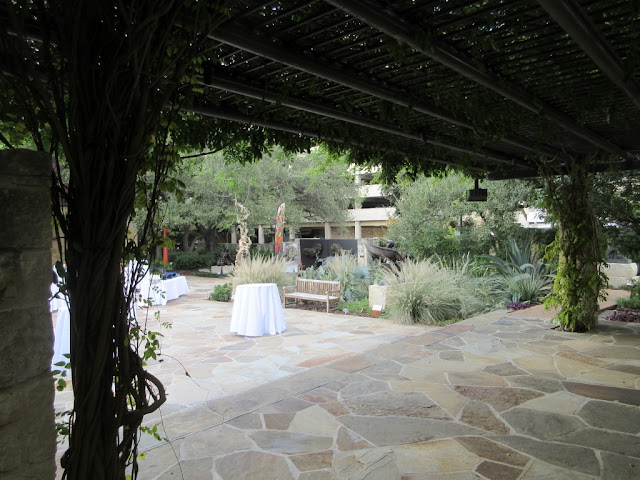 These two firms are so prolific it's a challenge to keep up with them. 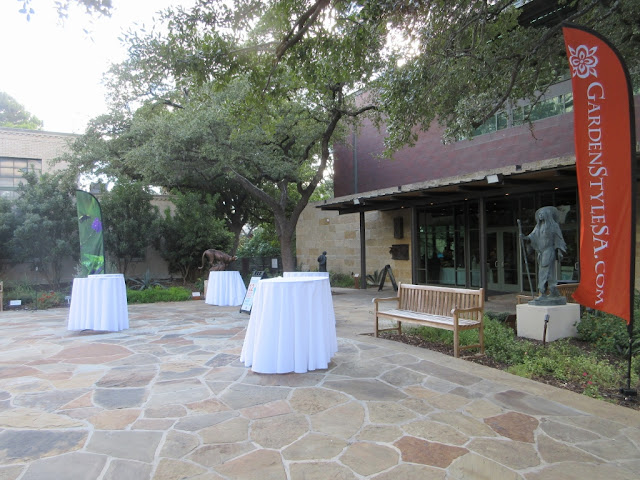 Riverfront hotels form a backdrop to this small urban space. 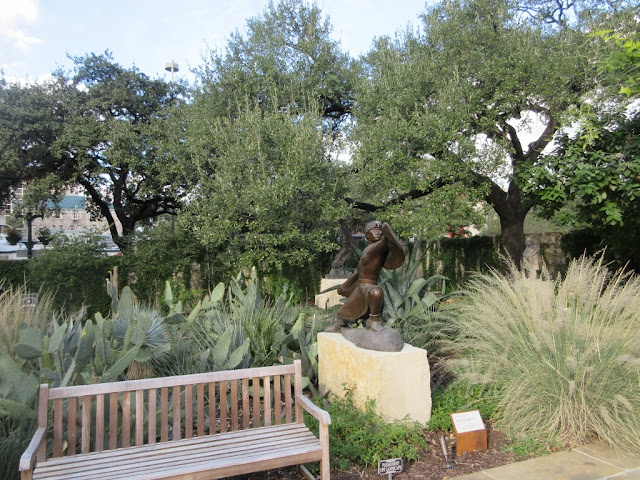 Or at least screen as much as possible.  Someday those oaks will meet and the parking garage across the street should disappear. 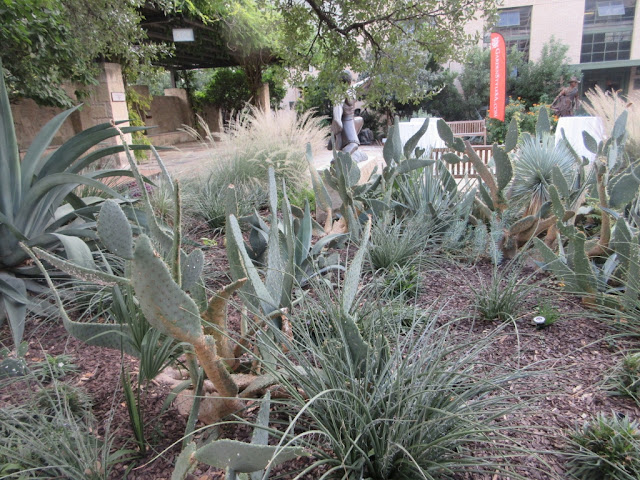 The century old original waterworks for San Antonio forms one side of the courtyard.  It's small because our underground aquifer water source is so clean it's simply piped out of the ground and into our homes with only a spritz of chlorine to keep bacteria at bay. 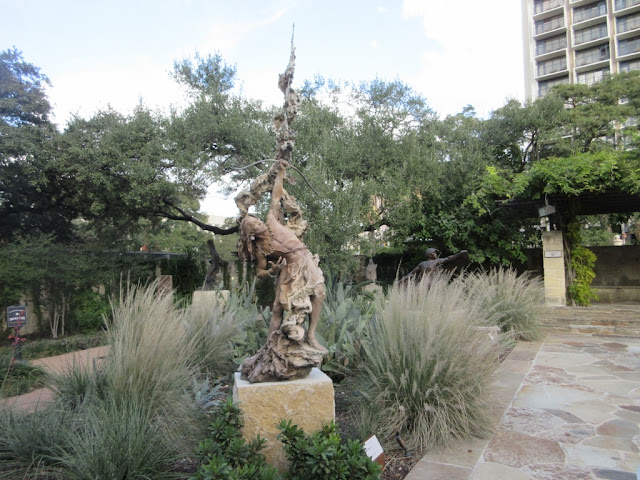 Sculptural Live Oaks, like the one at the end of the walk, fit right into this garden repeating the curvy form of those longhorns. 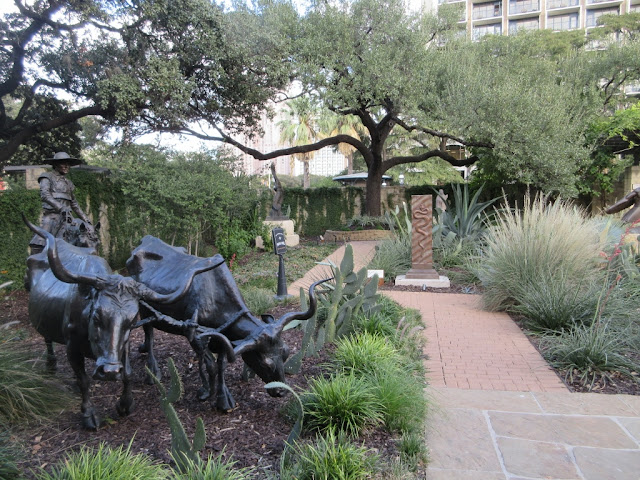 Horses on these large panels which also function as gates. 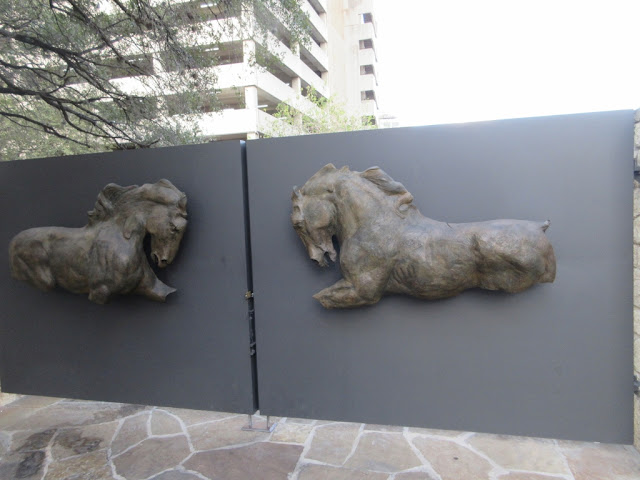 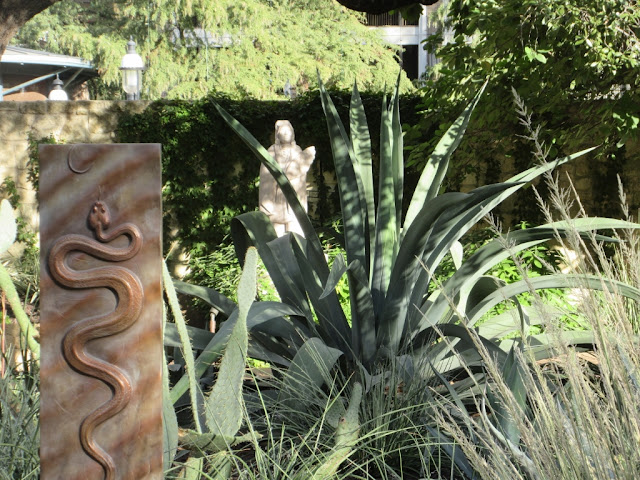 The 'Partners in Conservation' event celebrated a milestone of a trillion gallons of water saved through conservation over twenty years.  Another milestone, a new desalination plant is up and running.  We're about 150 miles from the beach so what gives with that?  We have a major source of brackish, but otherwise clean, water in the Wilcox aquifer south of town which now provides 12 million gallons of drinking water a day.  More importantly, the Wilcox aquifer is not subject to drought restrictions. 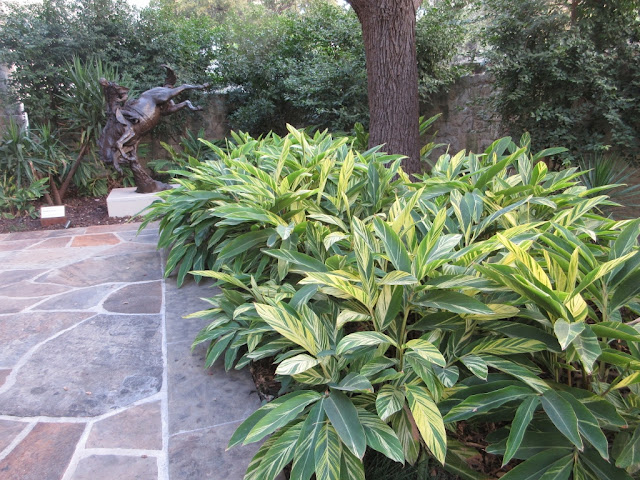 More of those sunlit grasses. 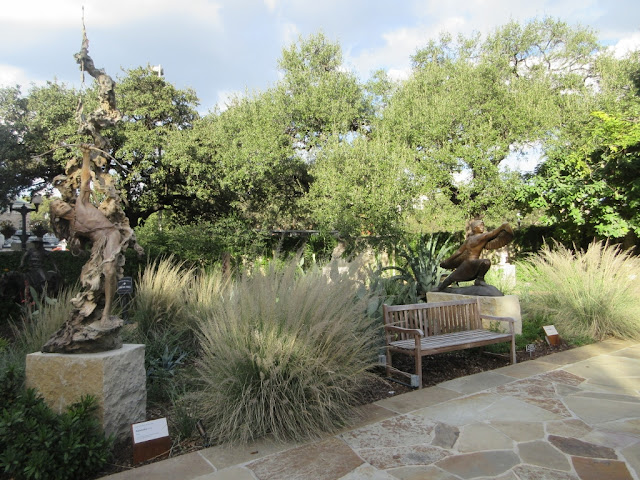 The event got underway just as the sun set.  During regular hours you will find tables and chairs to enjoy lunch or a break from a day of walking in the city. 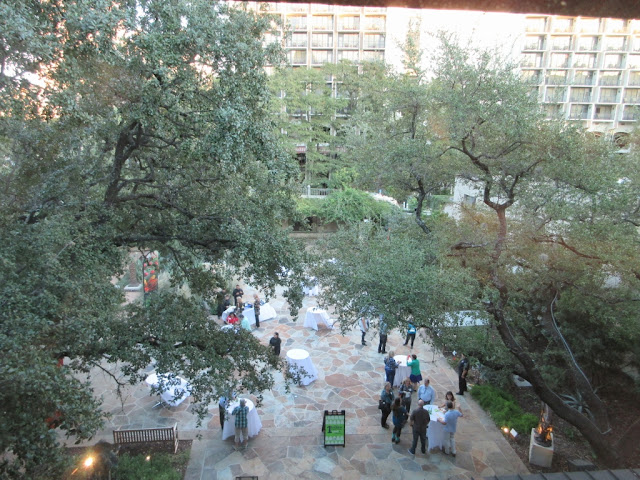 On the right is a group learning about the first artesian well in San Antonio depicted in a tile mural. 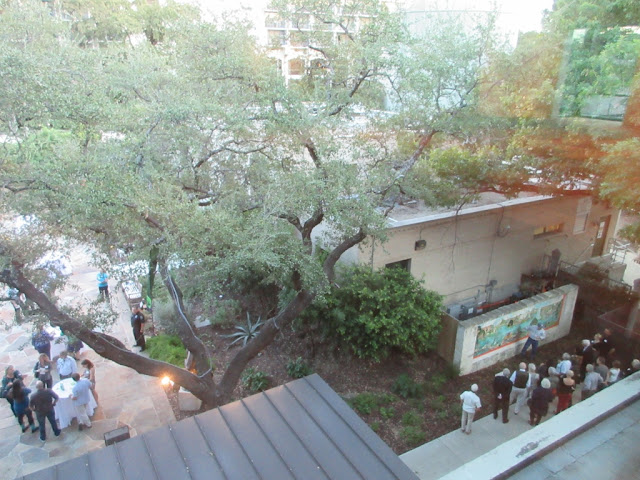 The gusher just right of the Alamo marks the waterworks and museum location. 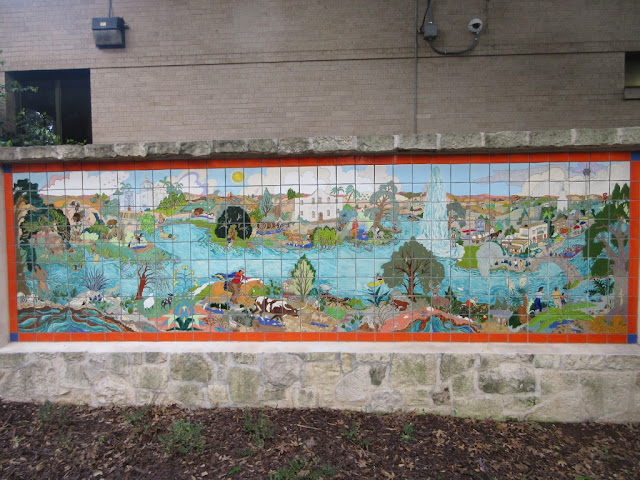 The museum's river portal has a spectacular waterfall. 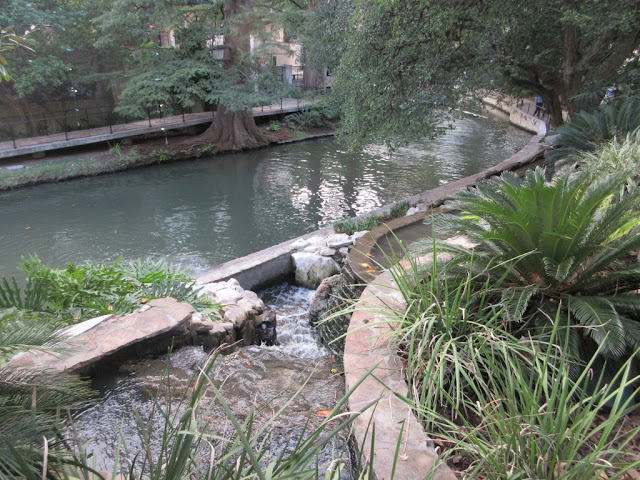 A look down at live oaks from the upper level of the pavilion with the San Antonio River just visible through the trees. 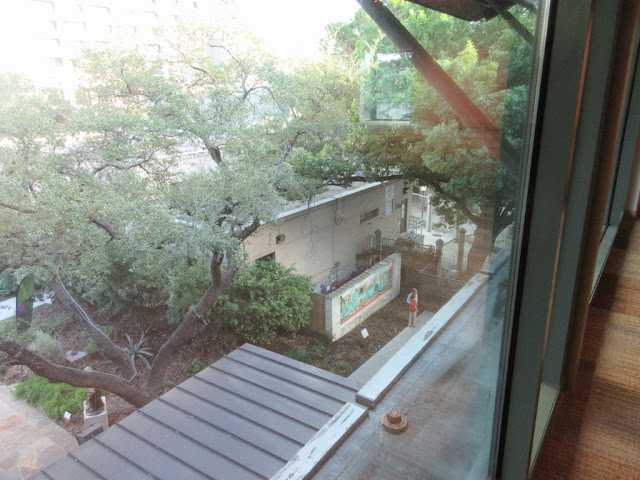 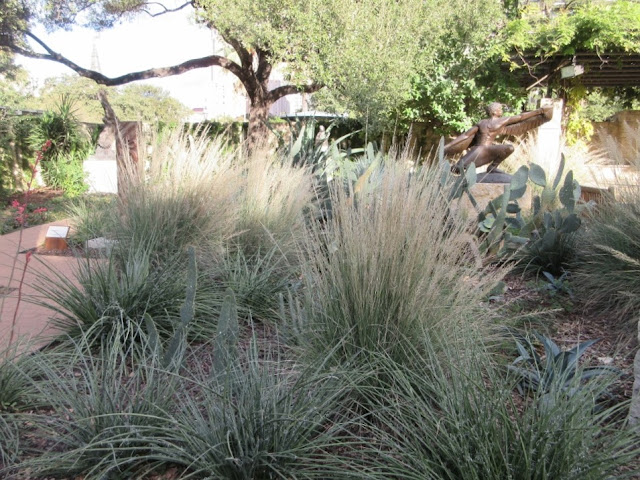 I'll be sure to detour through the Briscoe sculpture garden during future trips downtown.

The Briscoe is open until 5pm most days and until 9pm on "Downtown Tuesdays" which is a popular night for locals to visit.  Parking is free on Tuesday night plus many restaurants and other venues feature specials enjoyed by locals and visitors alike.