Wildlife Wednesday is hosted the first Wednesday of each month by Tina at "My gardener says..." Let's take a look at wildlife visitors during July.

We've had the pleasure of hosting a Crested Caracara or "Mexican Eagle" again this summer.  Caracara is an onomatopoetic name if ever there was one with "Cara-cara" cries coming from the treetops along the wooded creek behind our house.  As members of the Falcon family they are raptors which feed on snakes and lizards.  Caracaras are mostly found in Mexico, Central, and northern South America.  They are also observed as year-round residents in Central and South Texas, Southern Arizona, and Central Florida.  We only see them in summer so they must head south when it gets cold here. 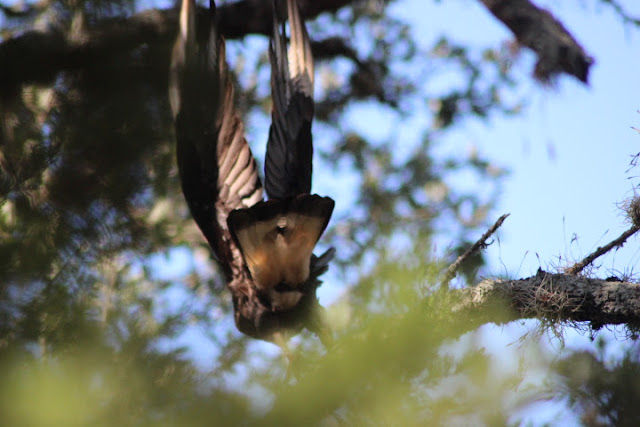 A Red Paper Wasp on Painted Poinsettia (Euphorbia cyathophora).  Our native poinsettia is a cousin to the more famous holiday poinsettia native to the tropics. 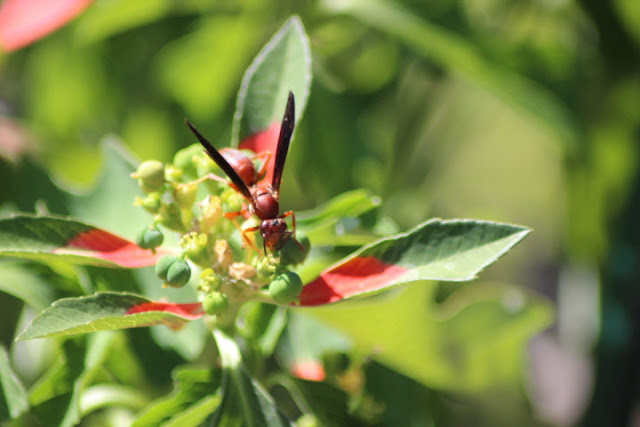 Not exactly in the garden and I probably should be embarrassed to show this but I'm not because it is
so pretty.  After spotting this web glistening in the sunshine I left it for a day before removing it.  The spinner never returned and nothing was snared in the web.  Spiders are generally ushered out and most bugs that make it inside aren't as lucky. 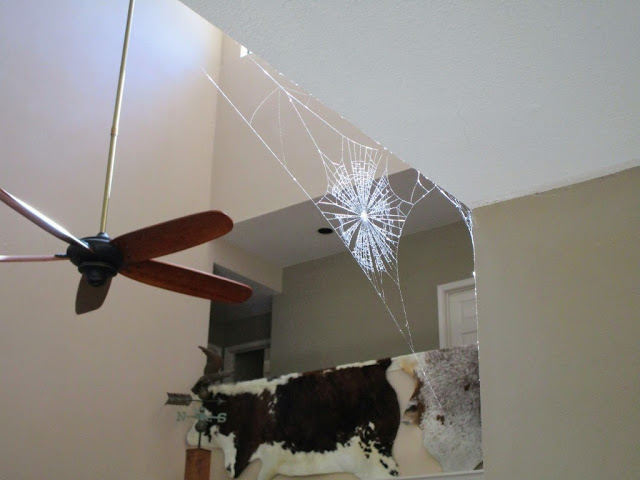 While watering potted plants one morning I was startled to see the eye of a newborn fawn stashed here by a protective mom.  Fawns have no scent and are safer from predators if mom leaves them for hours at a time. 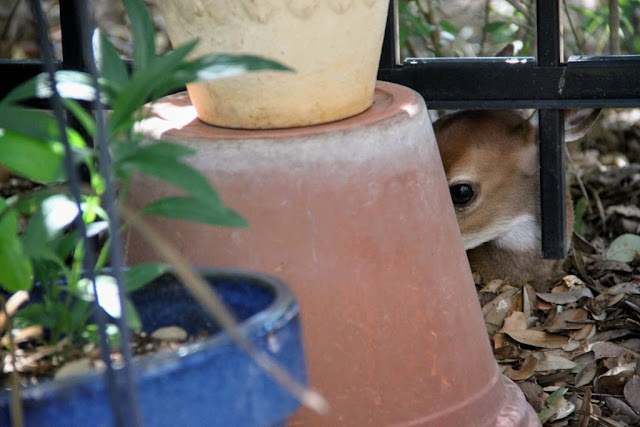 She may have been trying to push the little one through the fence.  We've had that happen before.  Spots are obviously for camouflage and work quite well. 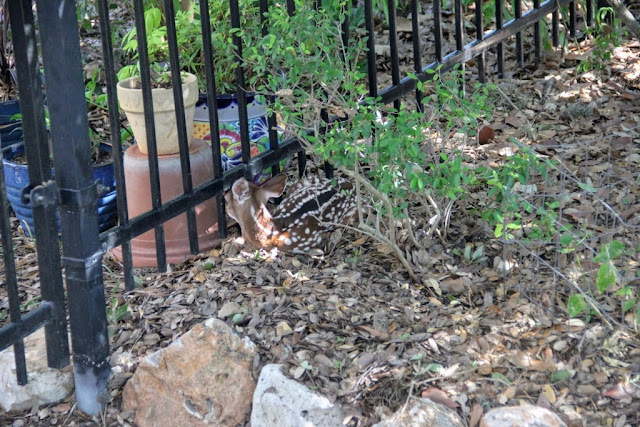 Mom was nearby and intervened when the fawn had enough of my attention. 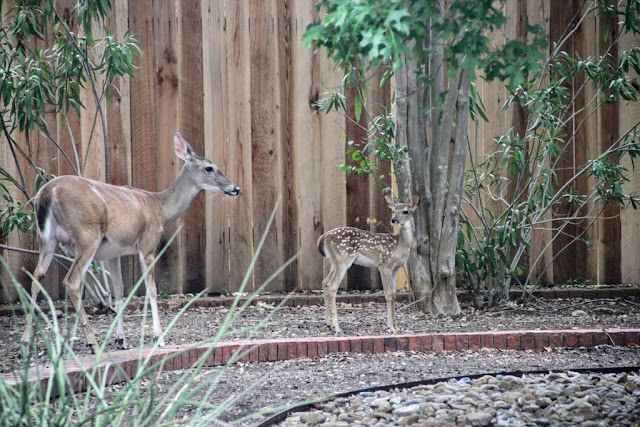 Scampering off to safety.  You have only to look at their tails when they run to see why they are called White-tailed deer.  You'll also notice that this is a suburban neighborhood and not out in the country. 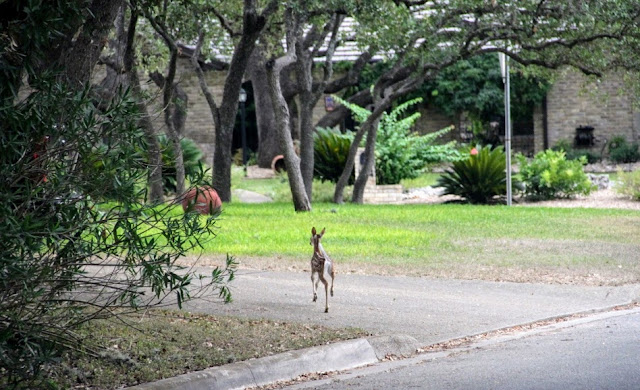 The next day they were back. 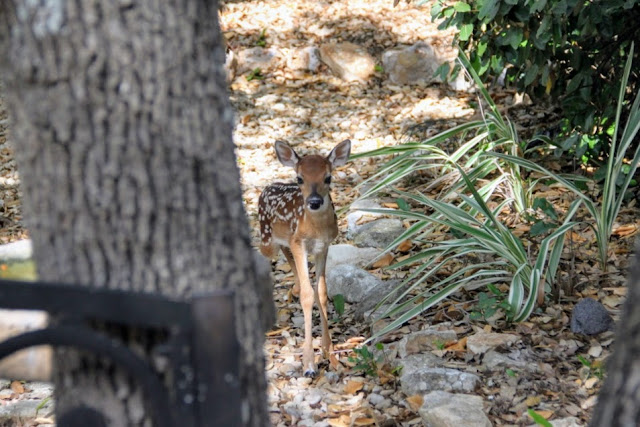 Watchful mom resting in the shade. 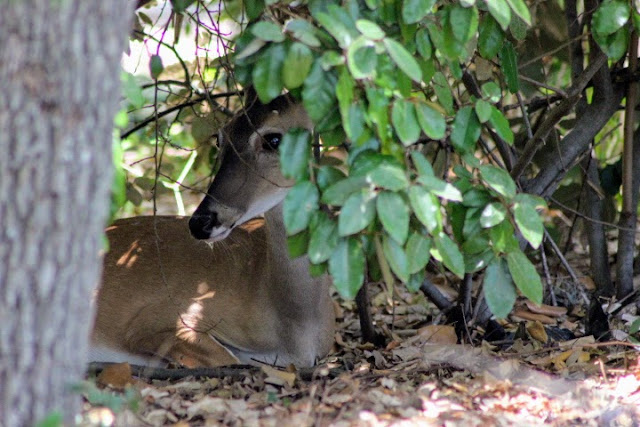 Water in the birdbath must have been the draw.  With almost no rain since May, water for wildlife is important. 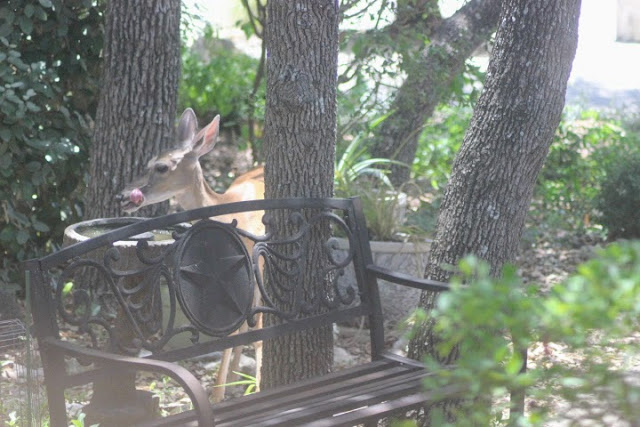 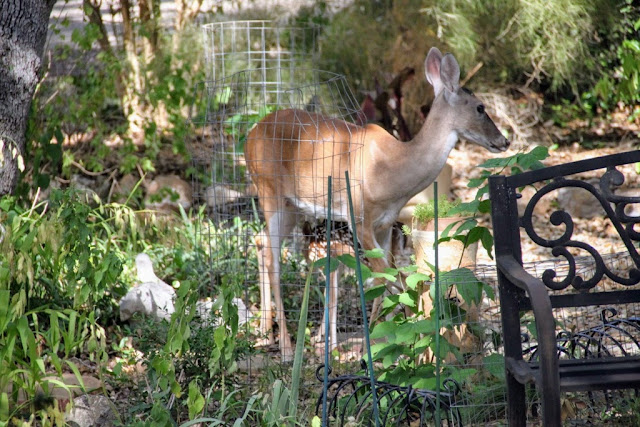 If you noticed all the wire cages and upturned baskets, those are attempts to protect plants.  Yes, she has been eating my plants! 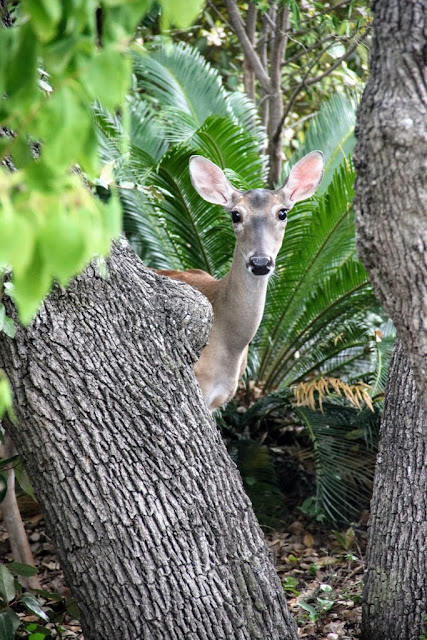 We've put a tub with water out behind the back fence for the rest of the herd.  A huge 10-point still in velvet stage for antlers.  Eventually the velvet will itch and bucks will rub trees to remove it. 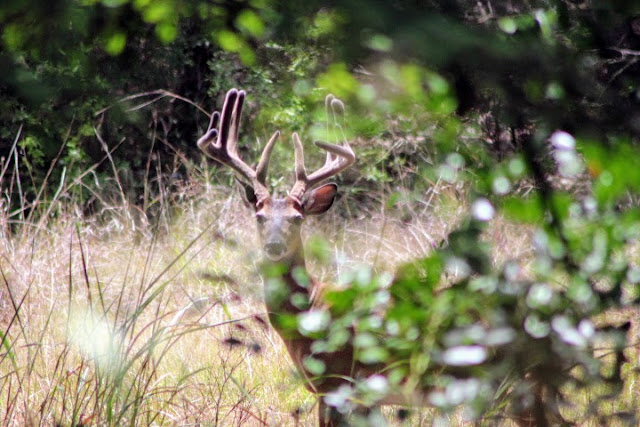 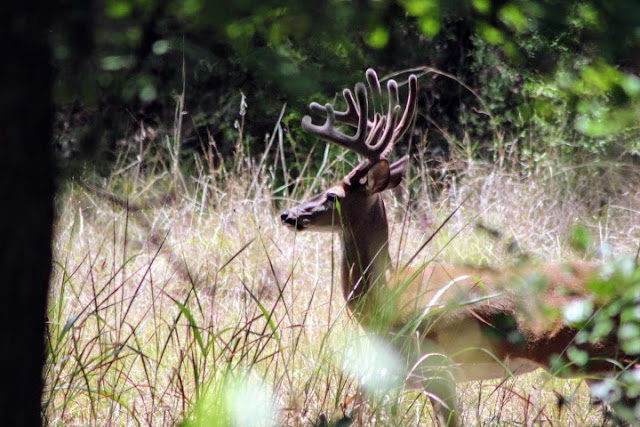 There were several bucks back there in July.  They know to stay in the trees to camouflage their antlers.  They'll be fighting soon as mating season starts up again in fall. 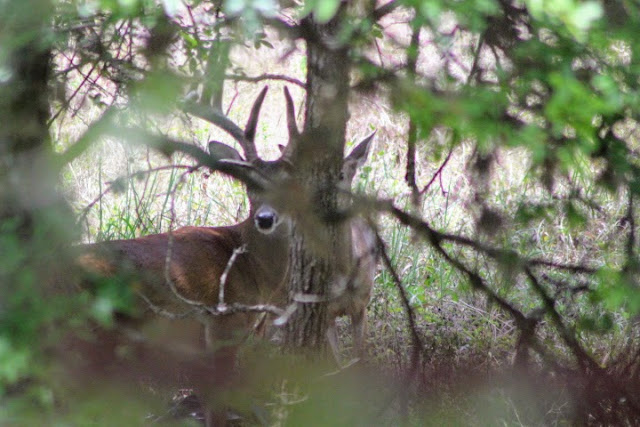 For more wildlife in the garden check out Tina's post on her blog.
Posted by Shirley Fox at 8:10 PM