First time blooms on my favorite plants for April.

I've been in various stages of the flu for about two weeks now.  Got the flu shot, not a covered strain.  I'm recovering slowly now and when I do get a chance to go outside I've been surprised at how amazing everything in the garden looks.  The biggest surprise are blooms on plants that rarely bloom or have not bloomed before.  On the last Friday of each month Lori at Danger Garden posts her favorite plants and asks garden bloggers to do the same.  Since these rare (for my garden) blooms caught my eye this week I'm putting them together for my favorite plants for April.

First up has to be Callistemon 'Little John' or dwarf bottlebrush.  One of the first plants I put in the garden back in 2010, I had given up on it ever blooming.  A big freeze the first year knocked it back to the ground and over the years it has basically been a foliage plant.  Too much shade?  Not enough water?  Hard to say what it was, but now this.... 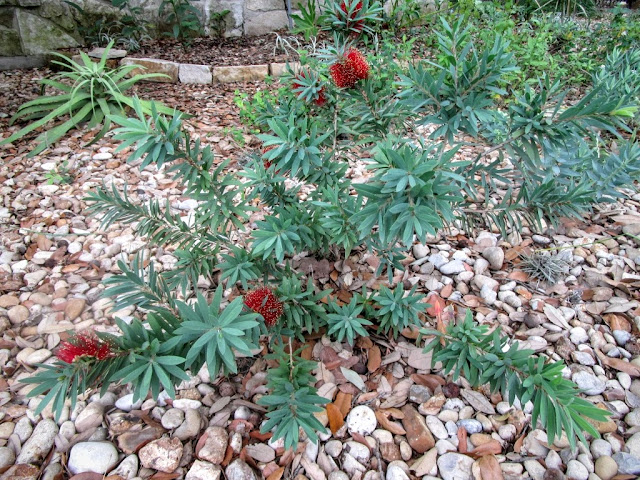 Definitely a "bottlebrush".  I was always fascinated by these blooms, 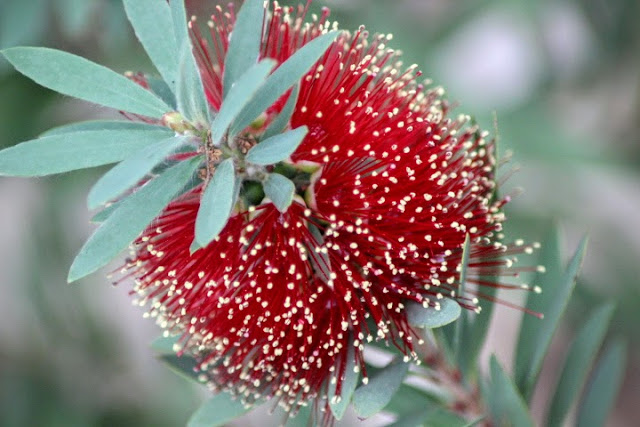 Funny thing is that several years ago I decided I didn't want red blooms in the front garden.  Now I might change my mind since these usually look best in groups.  Nope it won't get moved.  I tried transplanting one Callistemon from here to more sun and it died so I'm glad I left this one in place. 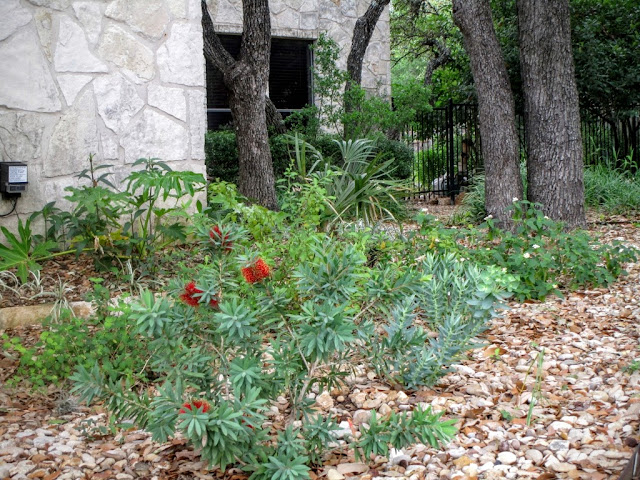 Creeping Germander (Teucrium chamaedrys aroanium) with purple blooms.  It's the same plant shown in my blog header photo, but I never told you it had only ever looked like that once--until now.  As it grew and spread it just never bloomed.  Must be something about this year, rain with intermittent sunshine, that has brought out the blooms on this and so many others. 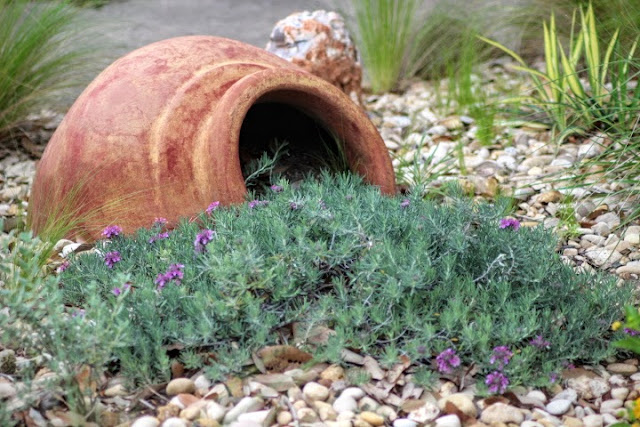 Another first time bloomer is Bauhinia mexicana or Mexican Orchid.  We may have had a couple of sporadic blooms last year, but this is the first time for full bloom.  It needed three years to recover from a deep freeze the same year it was planted. 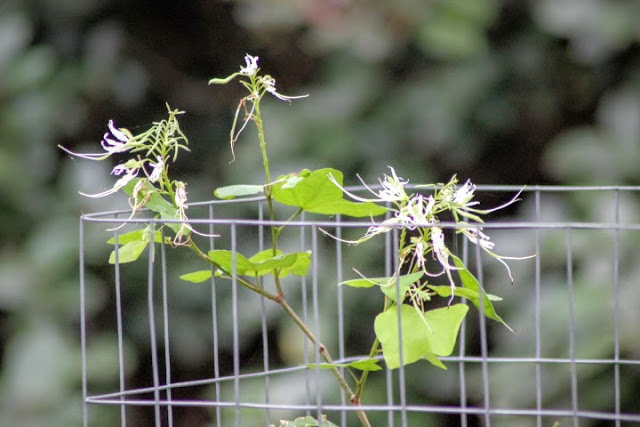 Supposedly deer resistant, the deer still nibble and so it gets a cage which allows it to bloom.  I think that as it grows taller (up to 8 feet) and stronger it might be okay.  A great understory tree for our area, I wanted this one for its white blooms which I hope to enjoy in the front garden from spring to fall each year. 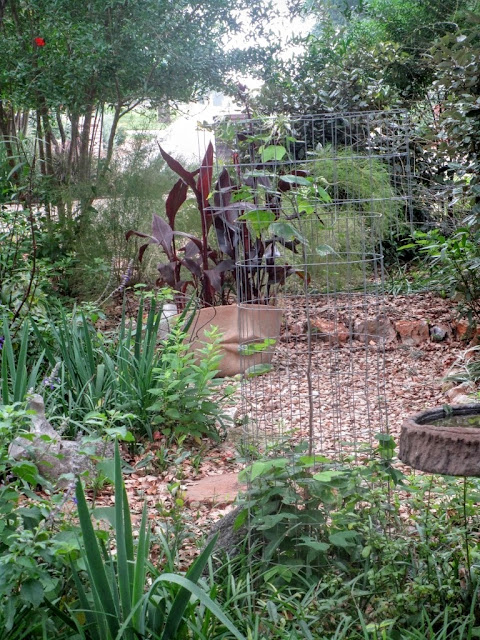 This was labeled Hardy Red Amaryllis though it looks more pink to me now that it's blooming.  I had kept it in a pot for several years while trying to decide on a permanent spot.  Guess it prefers to be in the ground.  I bought this before I learned that good old Amaryllis (Hippeastrum) from the big box store is hardy here.  Now all my holiday Amaryllis go outside for reblooming. 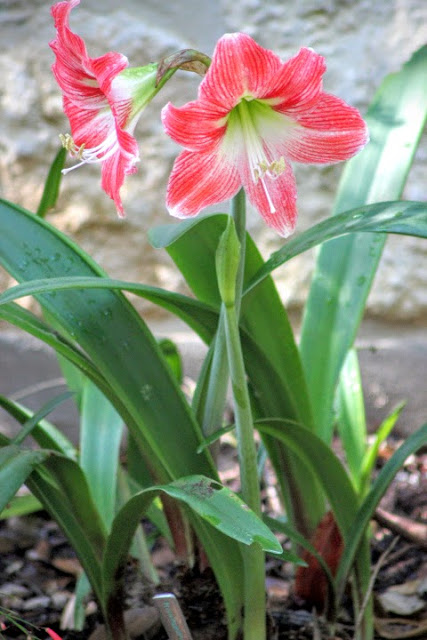 Opuntia humifusa, a groundcover prickly pear cactus covered in bright yellow blooms.  Neal had to remove a bunch of wildflowers so I could see them. Gorgeous! 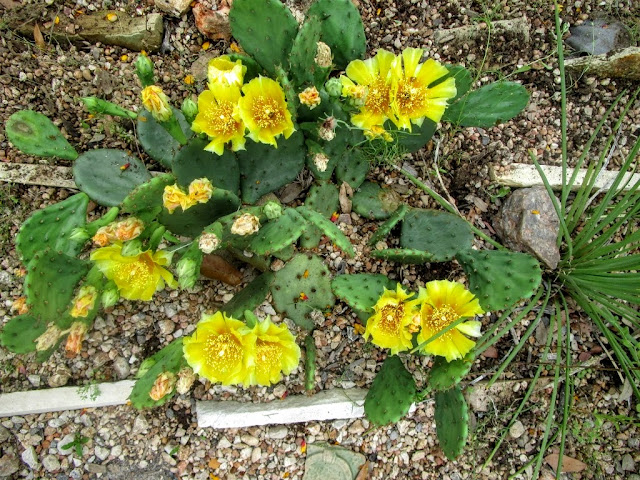 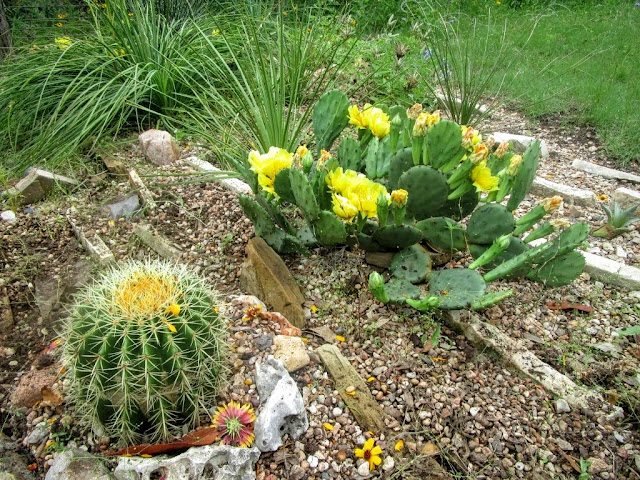 It's hard to tell but this reblooming orchid has three stalks blooming at once and it's at least the third rebloom.  Best advice is to treat it like a houseplant with good light and don't fuss. 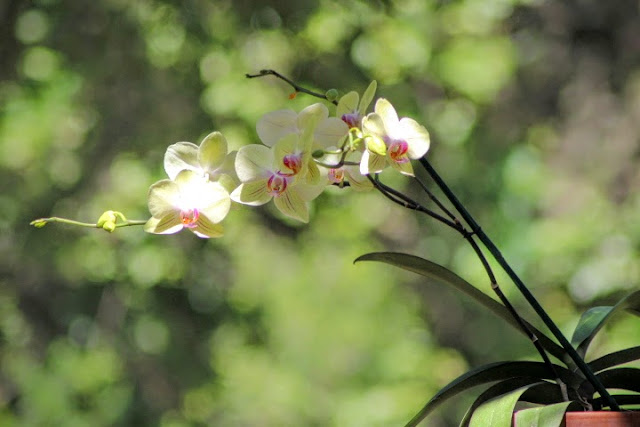 Last but not least is the silvery twist leaf yucca out by the street.  If my track record with yuccas stays intact, the center will die out but there seem to be plenty of pups on this favorite to hold down the spot for a few years. 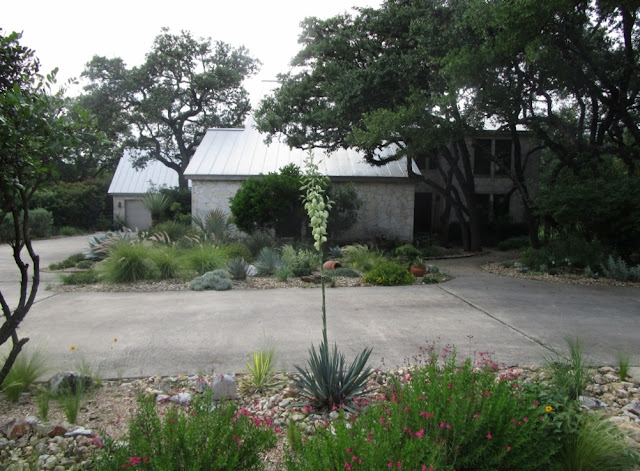 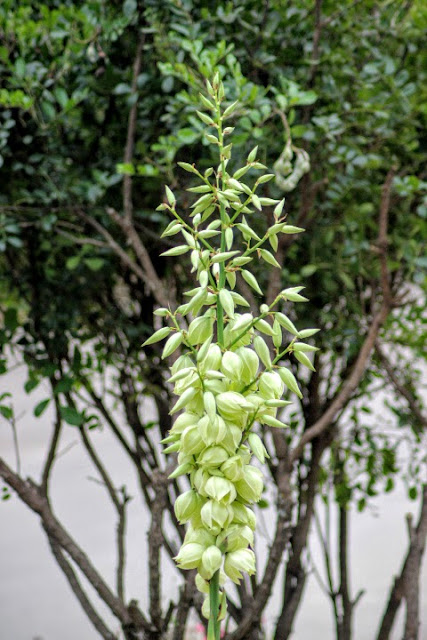 Those a just a few of the plants that have been cheering me up as I venture into the late spring garden.   It's a good thing I took time to get photos today as we just had a hail storm.  Not big enough to do a lot of serious damage but I imagine some of these flowers will be knocked off in the morning.   Check out Lori's favorite plants for April and come up with a few of your own for May.
Posted by Shirley Fox at 9:28 PM