It's Fall in South Texas so it's time to head out to the Apple orchard. 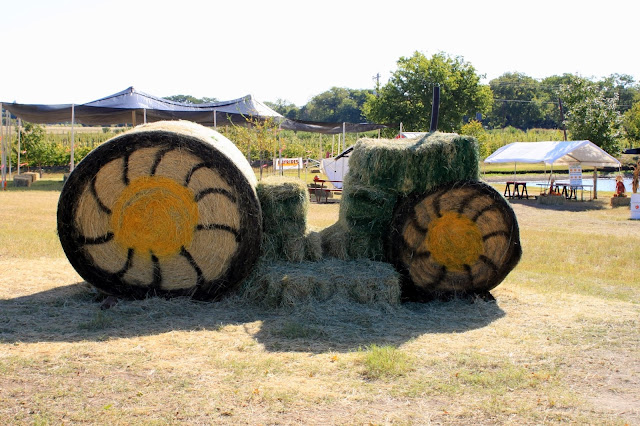 San Antonio is full of surprising gardens and gardeners and I had a chance to visit one recently.  One significant contributor who helped make the Mitchell Lake Audubon Center gardens I posted yesterday such a beautiful place to visit was local plant collector Al Del Rio.   I had the opportunity to visit Al's garden one evening last week.  What a surprising visit it was!

Let's get started in the back yard where Al has recently removed most of the lawn and added areas for cactus, agave, aloes, and other succulents. 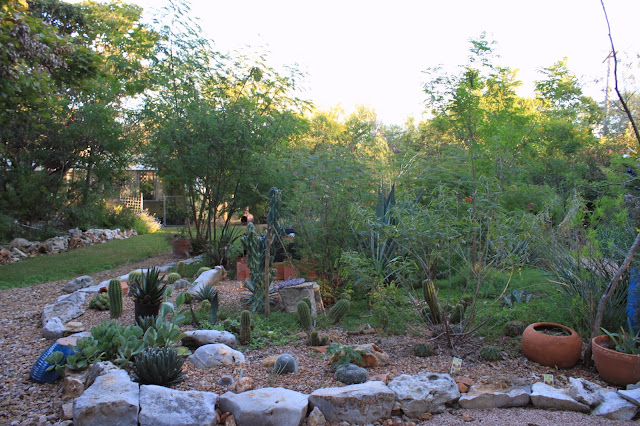 Last Saturday I joined friends at the beautiful Mitchell Lake Audubon Center just southeast of downtown San Antonio for their annual Fall Festival.  The local Audubon Texas group has restored this beautiful 1910 home as a center.  The home was moved to the site from the McNay Art Museum east of downtown. 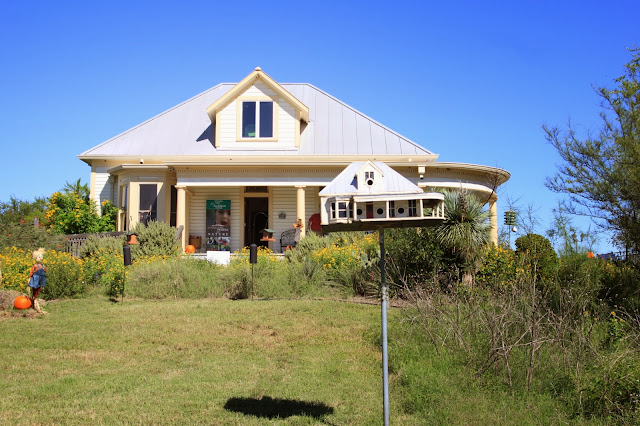 During the month of October I'm joining Pam at Digging for Support Your Independent Nursery Month.  Independent nurseries are especially valuable local resources for plants that grow best in our climates.  This week I'm featuring The Natural Gardener in Austin.

Another Austin nursery?  When I visited The Natural Gardener back in February I knew I would enjoy returning to see how it looked later in the year.  I got my chance when gardening friends invited me along on a plant shopping trip to Austin.  In a previous post I wrote about our visit to Barton Springs Nursery and this time it's our stop at The Natural Gardener the same day.  Since I covered much of the nursery grounds back in February I'll focus on some of the areas I missed and those that look best this time of year.

Of course I always take time to visit the spiky plants and The Natural Gardener has plenty of them. 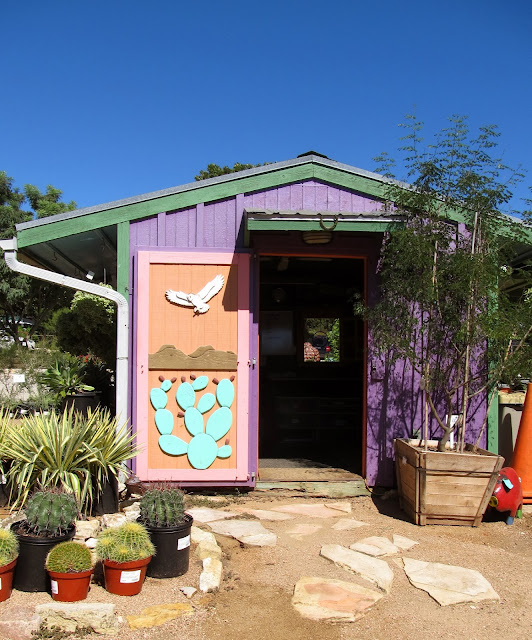 Plant ABCs is an ongoing series where I highlight a plant from my garden for each letter of the alphabet.  I'm currently going through the entire alphabet A - Z, then will continue updating and adding plants to the list over time.  My previous posts in this series are on the "Plant ABCs" tab under the header.  Today's letter is "T" and Tecoma stans is the choice.  It's also Texas Native Plant Week so featuring Texas native Tecoma stans or Esperanza fits right in with this week's theme. 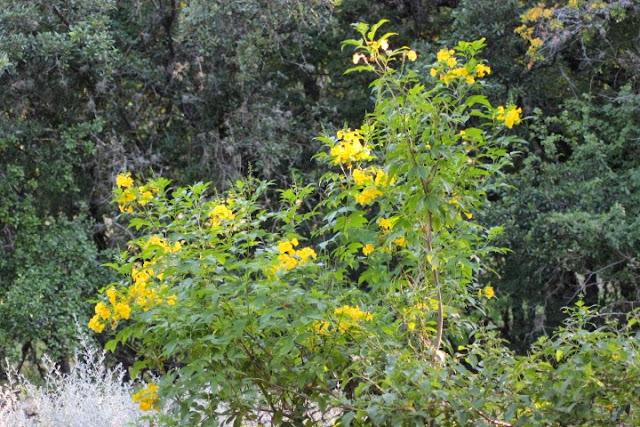 Since last spring I've joined Gail of Clay and Limestone for Wildflower Wednesday to celebrate wildflowers in the garden on the fourth Wednesday of each month.  It's also Texas Native Plant Week so I'm celebrating both with a tour of native plants currently blooming in my garden.  Collecting and growing native plants in my garden has become a bit of a quest for me since they do best in our challenging climate.  October is when many plants look their best here after having recovered from the long hot summer and with several fall rains to help them along.

Helenium amarum reseeded in this location from last year and should continue to grow along the gravel path in the circle garden. 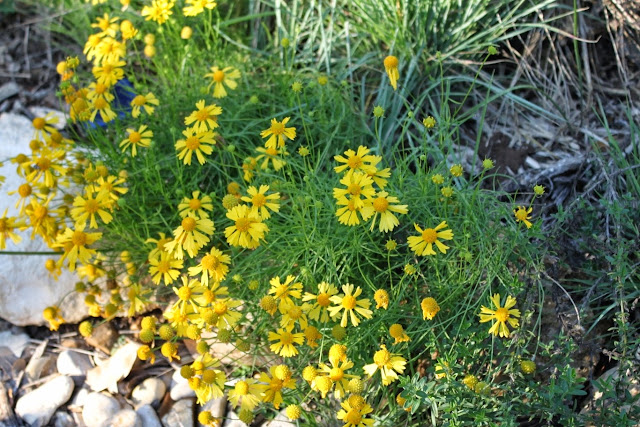 During the month of October I'm joining Pam at Digging for Support Your Independent Nursery Month. Independent nurseries are the best resource for plants which work well in our climate.  It's also Texas Native Plant Week and I'm featuring my favorite native plant nursery.  I recently re-visited Medina Garden Nursery just over an hour west of San Antonio with a group of gardening friends.  Besides being a beautiful drive, it's well worth the trip just to spend time with native and butterfly plant expert Ernesto Carino.  Ismael Espinoza, who usually works with him, was at his other job on this day so we missed him.  We spent over two hours touring the nursery and gardens surrounding Ernesto's home.

As I wrote in my previous post on Medina Garden Nursery, it's all about the plants.  Texas natives and plants adapted to our tough Texas climate--they know what grows best where we live.  They collect cuttings in the wild and trade with native plant enthusiasts from all over.  Ernesto says he often receives seeds or cutting in the mail from those who just want to preserve native plants for future generations. 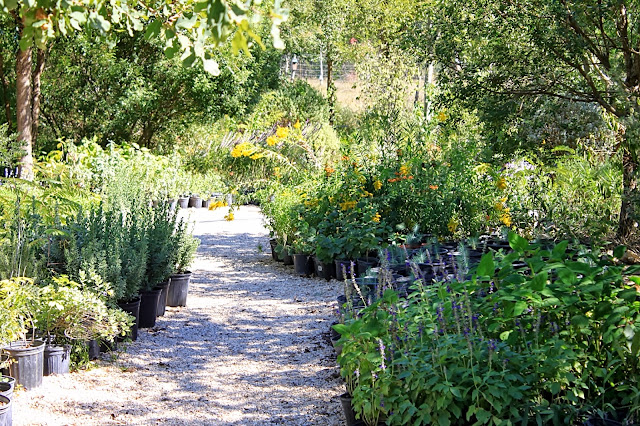 During the month of October I'm joining Pam at Digging for Support Your Independent Nursery Month.  Independent nurseries are especially valuable as a resource for locally grown and climate-tested plants.  That's certainly the case with today's visit to Barton Springs Nursery.

My Austin blogger friends might be just a bit surprised to see the title of this one.  Barton Springs Nursery is still in Austin and I haven't moved but when local gardening friends asked me to join them on a plant shopping trip to Austin I quickly agreed and, based on recommendations from several Austin bloggers, added Barton Springs Nursery to the list.  The short drive of just over an hour allows me to consider it "far north San Antonio but really southwest Austin" for blogging purposes. 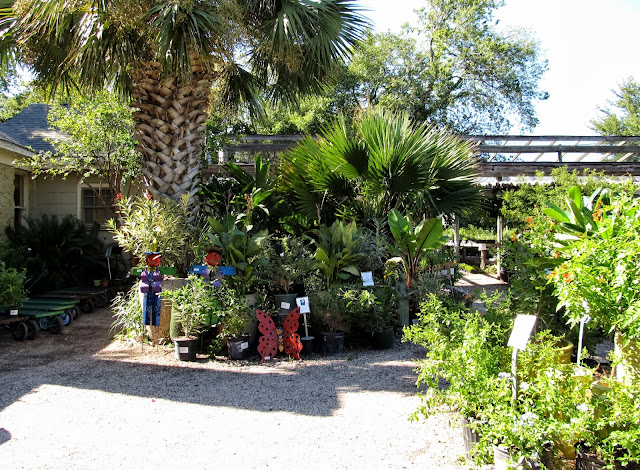 Over the last few years we have welcomed many wildlife visitors to the garden.  Yesterday we had a visitor we'd hoped to see for quite a while.  We knew gray foxes lived in the area but had never seen one until now. 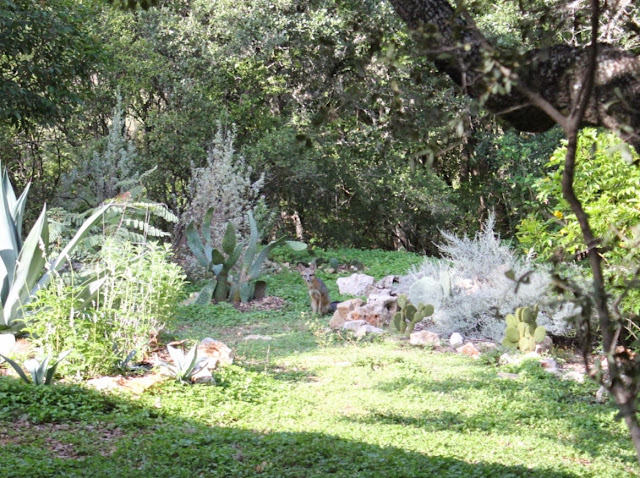 We call our home "Casa Zorro" because zorro is the Spanish word for fox (our last name) and I love to collect fox items for the house so knowing there are foxes visiting the yard is extra special.

During the first week of this blog two years ago I posted "before and after" photos of my front yard to show changes over the past year.  There's nothing magic about October 9th except it is a date for which I could find a "before" photo from my pre-blogging days.  As I begin my third year of blogging I continue the tradition to take stock of the yard during what is typically a peak bloom season. 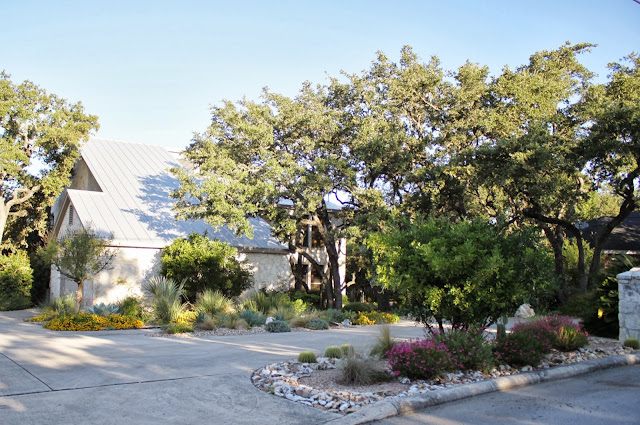 Each week in October I'm joining Support Your Independent Nursery Month sponsored by Pam Penick at her blog Digging to highlight an independent nursery in the San Antonio area.  Locally owned nurseries provide an important resource to learn about and buy plants which grow best in our area and you can't get more local than Fanick's Garden Center on the southeast side of San Antonio. 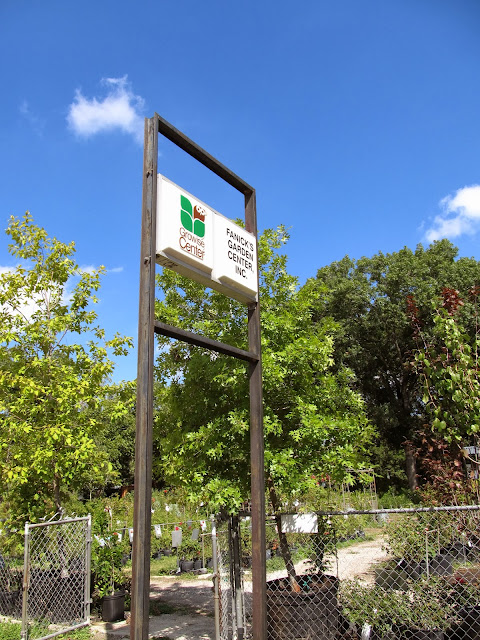 Fanick's is a throwback to the way shopping at garden centers used to be, and still is, because Fanick's Garden Center has been here since 1939 and is currently operated by Mark Fanick representing the third generation of his family to run the nursery.

This blog is two years old today and, as it happens, it's also my 300th post.  Two years and 300 posts is just a little less than three posts a week, so I guess I've been having fun...haven't I?  Well it's been enough fun that I plan to keep on going.  In celebration I'm sharing the story of this blog ("My Blog So Far....").  It is also Marilyn Monroe's birthday, the anniversary of Sputnik, and the day Janis Joplin died.  Somehow my blog anniversary is not on the list of the important things which happened on October 4th.   Yet.

I've never been busted flat in Baton Rouge, but I have been beaten silly by the Texas caliche.  Not much rhythm in there, but it feels similar.  And I haven't orbited the earth, but I have circumnavigated my circle garden a few times.  And regarding the seven year itch, that will be a post 5 years from now.

Anyhoo, back at the south 40, when we began planning our retirement move from Washington DC to San Antonio in the spring of 2008, I also began to search for landscape inspiration.  In addition to the many excellent local gardening articles and radio shows offering advice, I knew I needed a lot more.  I wanted a landscape that would reflect both my style and our region.

October is Support Your Independent Nursery Month sponsored by Pam Penick at her Austin blog Digging. Each week during October I'll join in by posting a tour of an independent nursery in the South Central Texas area.  Who better to supply us with the plants which grow best in our climate than nurseries owned and staffed by local gardeners?  Local nurseries are an especially good resource for those of us who are turning more and more to native plants in the landscape.

For my first independent nursery tour I'm revisiting Milberger's Nursery in San Antonio.  Last October I posted their Spook-tacular Halloween display with a creepy maze and plenty of great decorations.  On a recent visit I took additional photos to show you how pretty the nursery is on a typical day. 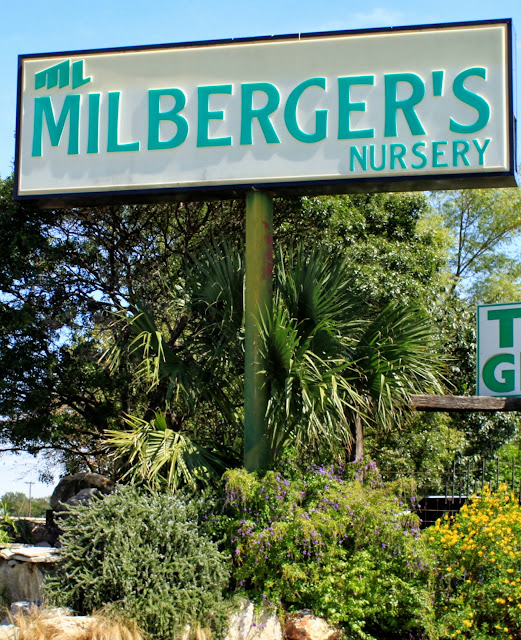 It's the first of October and I'm joining Heather at Xericstyle to show a wide view of my garden.  At the beginning of each month Heather invites bloggers to show the big picture so readers can follow our garden progress.

It's interesting to compare with my last wide shot post at the beginning of September when the shadows were quite different.   The bright Autumn Sage or Salvia greggii is now blooming along the street. 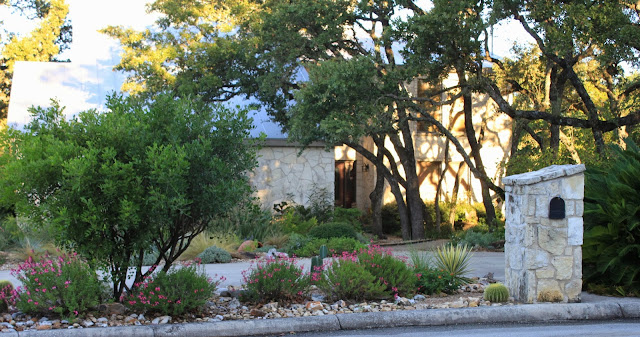