Sometimes the simplest ideas turn out to be the biggest challenge.  I'm all set to highlight Passiflora in my garden as a great butterfly host plant for the August edition of Wildflower Wednesday.  I can't get much closer to home when it comes to native plants than this Passiflora foetida grown from seed collected along the utility easement behind our back fence.  Or is it Passiflora foetida?  I checked the NPIN database at The Wildflower Center and noted their photo, especially the leaves, showed significant differences from mine.  Clearly this was more complicated than I thought.  After much searching I found no other Passiflora photos that looked any closer to the one in my garden so I'm going with Passiflora foetida and noting some plant characteristics may vary. 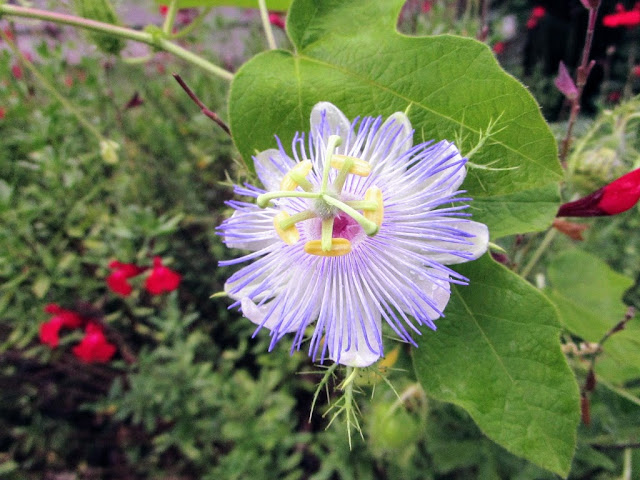 Common names include Corona de cristo and Fetid (stinky!) Passionflower.  Since these grow nearby without any supplemental water and care I follow nature's lead and let them scramble with just an occasional dose of water from the hose when nearby drought-tolerant plants need water. 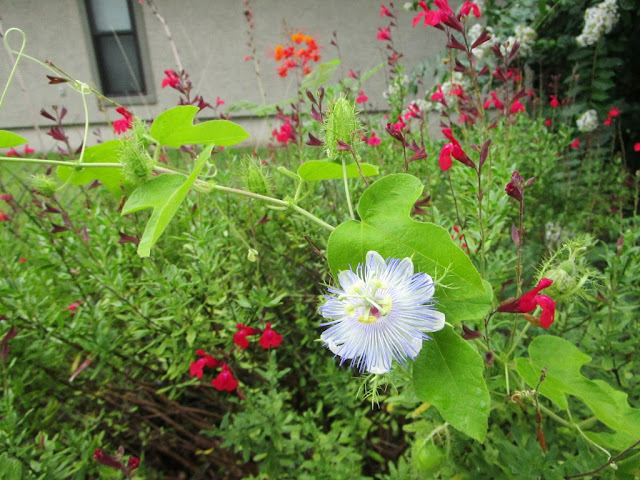 Passiflora flowers open early and close just as soon as the sun hits. 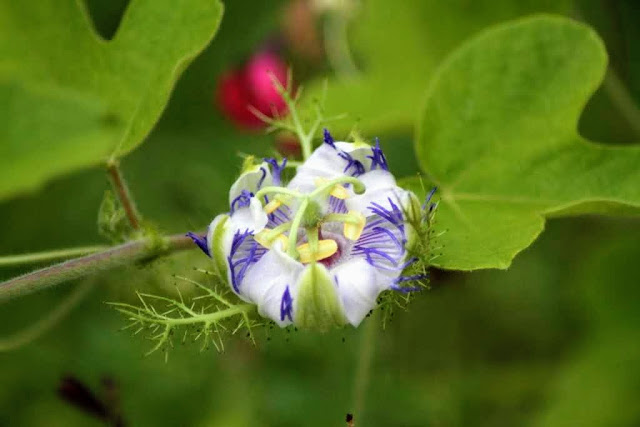 Caged bloom buds and seeds add interest along the vine and you can see (above and below) where the cage-like sepals fold out and back in as the flower opens and closes with light. 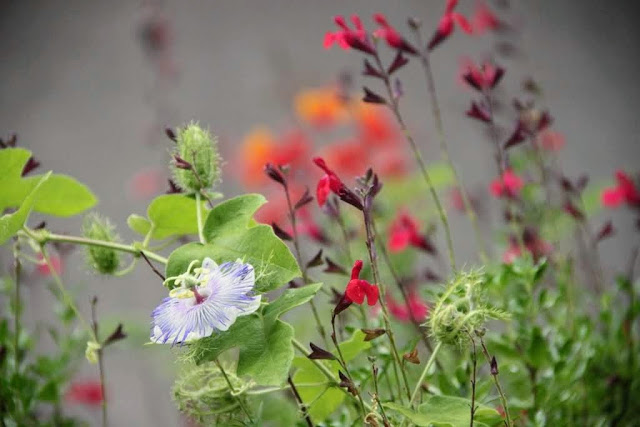 Available information is all over the place on the native/invasive status of Passiflora foetida.  Combining information from several sources I find Passiflora foetida is native to deep South Texas and has spread northward to San Antonio.  It's not even close to being invasive in our climate but introduced to tropical climates like Hawaii it can form a dense mat and smother native plants.  I would love to have it spread a bit more as it is the exclusive larval host for Gulf Frittilary butterflies we have in abundance.  In fact we've had a dry summer and the vines in the wild are parched so it's a good thing to give a few of these at home in my garden.  It is also a host for the stunning Zebra Longwing butterfly which aren't seen often enough in my garden.

Another Zebra Longwing host, Passiflora lutea or Yellow passionflower, turned up by surprise in my garden a few years ago.  Since it looks similar to Snailseed vine I almost pulled it but caught myself just in time and decided to research first.  At first I was stumped because I compared it to P. affinis which didn't look exactly right.  A post to the Facebook group Texas Flora quickly pointed me to P. Lutea with a caveat to wait for blooms to be sure. 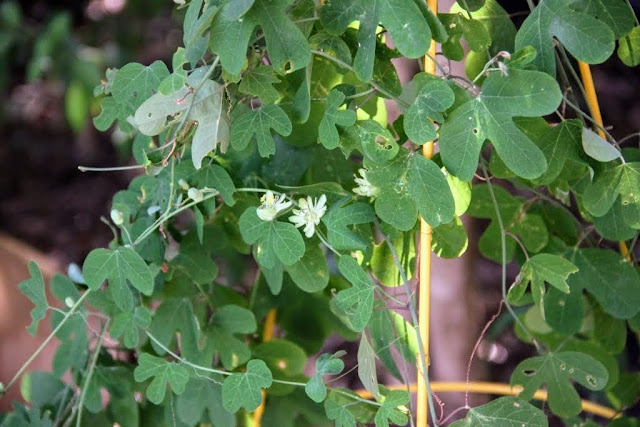 Happily Passiflora lutea has returned each year and grown from a small sprout to present tiny yellow blooms for the first time this summer.  Passiflora lutea prefers part shade and moist soil so it planted itself in the right spot near a barrel planter I water frequently. 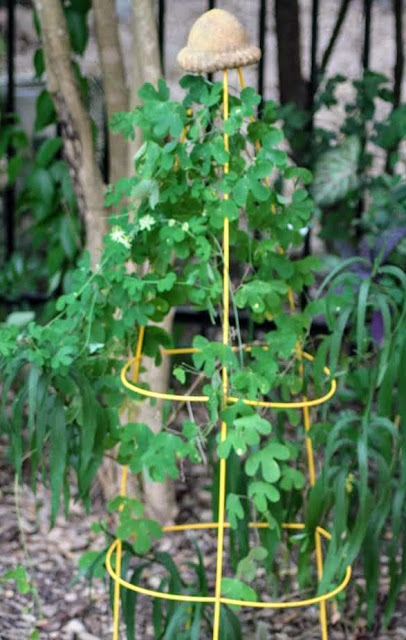 Host to several butterflies including the same Gulf Fritillary and Zebra Longwing which are attracted to Passiflora foetida featured above.

Given the success of these two Passiflora vines I'll try to add Passiflora incarnata which is one native Passionvine currently missing from my blooming collection.

Bring on the butterflies!

Wildflower Wednesday is hosted on the fourth Wednesday of each month by Gail at Clay and Limestone.  She always has informative posts on wonderful native plants so be sure to check out her blog for links to participating blogs as well.
Posted by Shirley Fox at 2:46 PM 7 comments 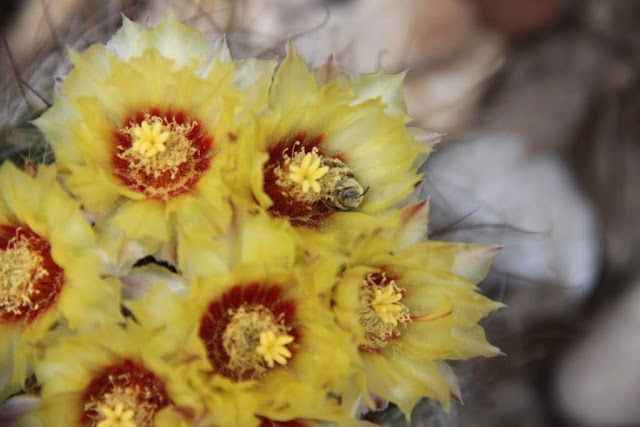 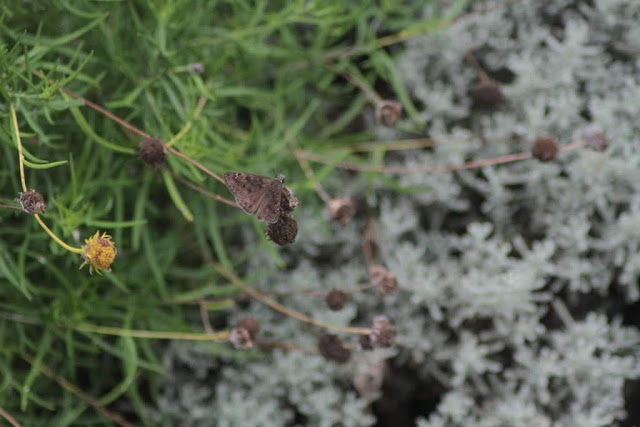 On closer look it's mostly the movement which gives it away. 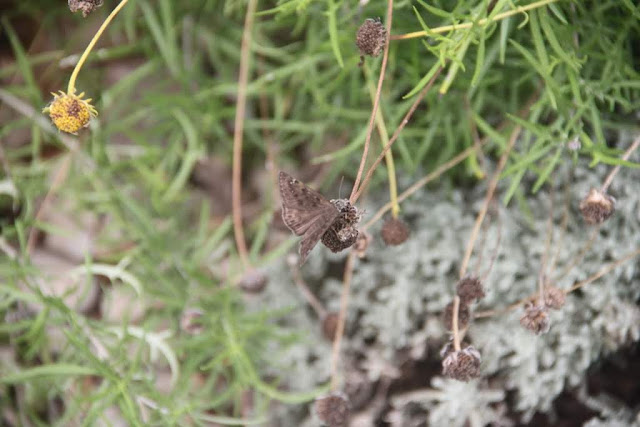 Red male cardinals have a bit of a challenge trying to hide but Mrs. C is harder to spot in the fig tree. 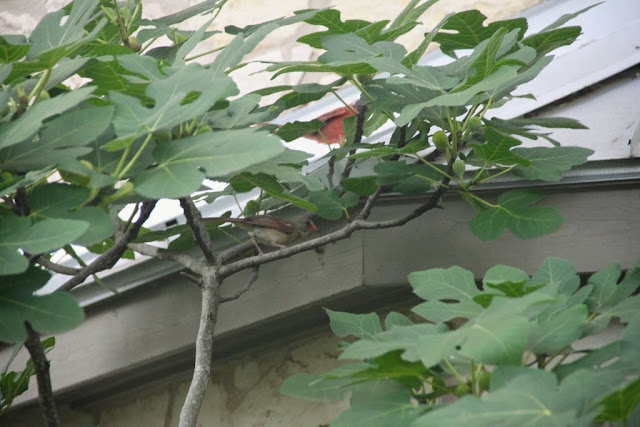 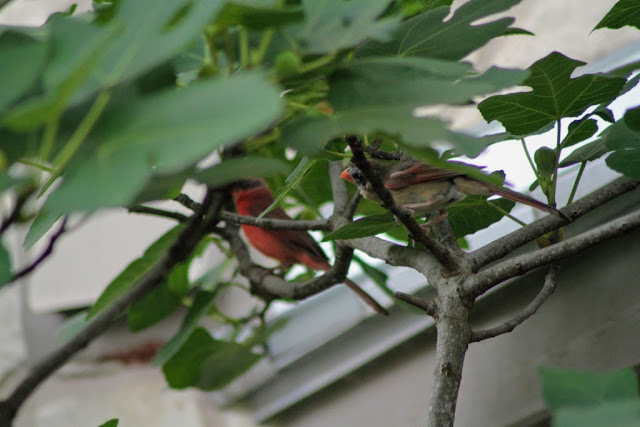 She's out in the open now fussing at me. 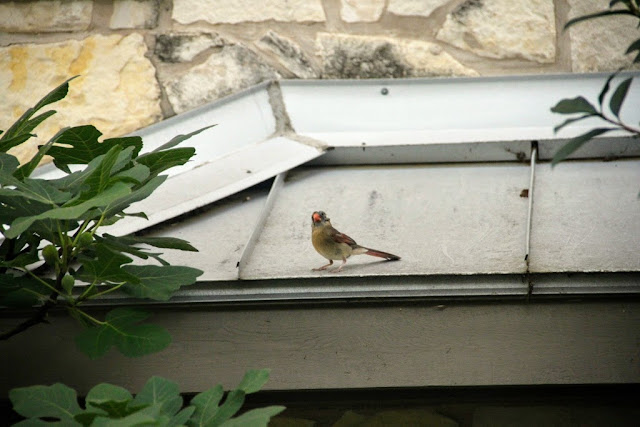 Not camouflage but a strange looking bird requiring a closer look.  This one took a minute to ID but then I remembered Tina's post from a while back showing a molting Cardinal.  That's what I think is happening here. 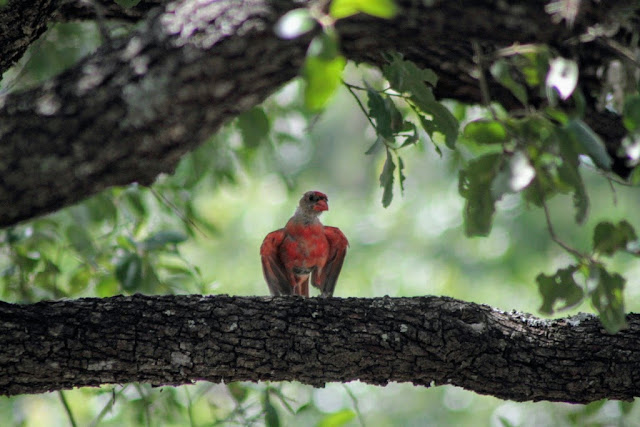 Birds breathe through their mouth and it's more obvious when it's hot out.  Between the heat and molting this poor guy has got to be very uncomfortable. 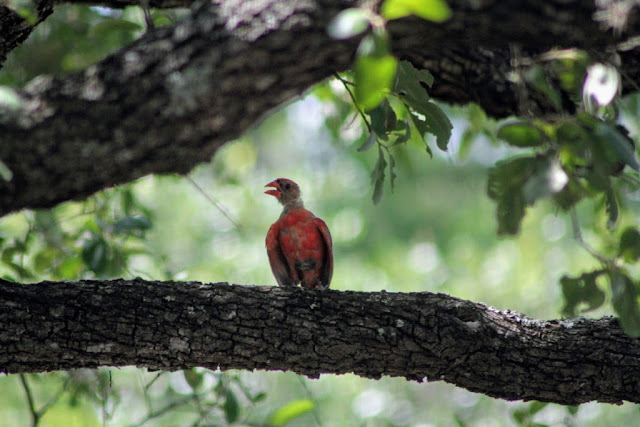 A common garden spider (Argiope aurantia) was reeling in her prey just as I walked by and before I could focus my camera.  Her web was so close to the ground I almost missed it. 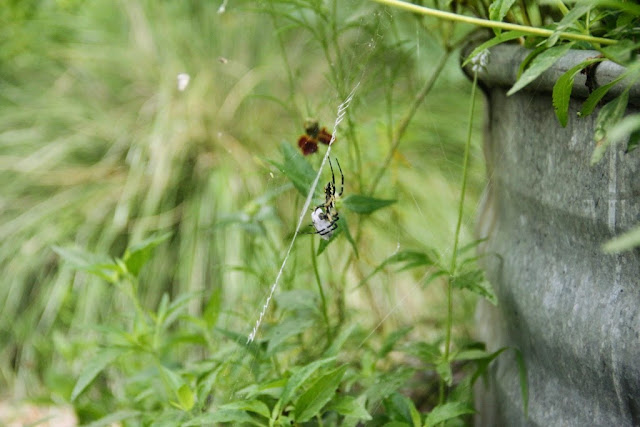 I sat down beside her and neither of us were frightened away.   She carefully rolled up her bundle which was the size of a small bee while I watched. 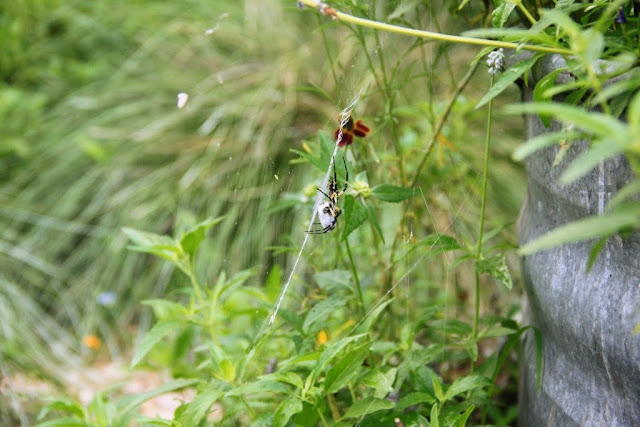 Nearby in the garden bees are busy. I think both of these are solitary bees. 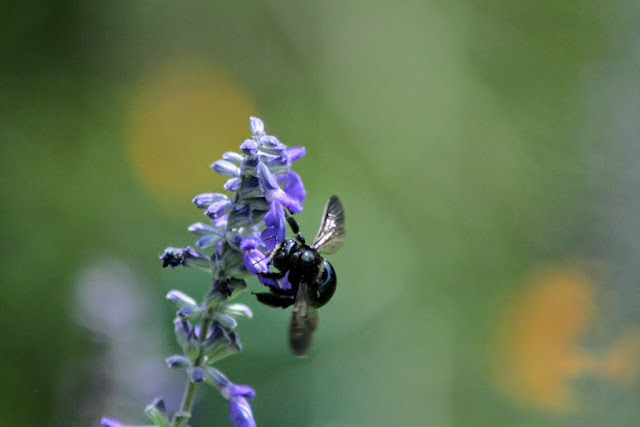 An almost transparent cicada I nearly missed has freshly emerged from an outgrown, discarded shell to the right. 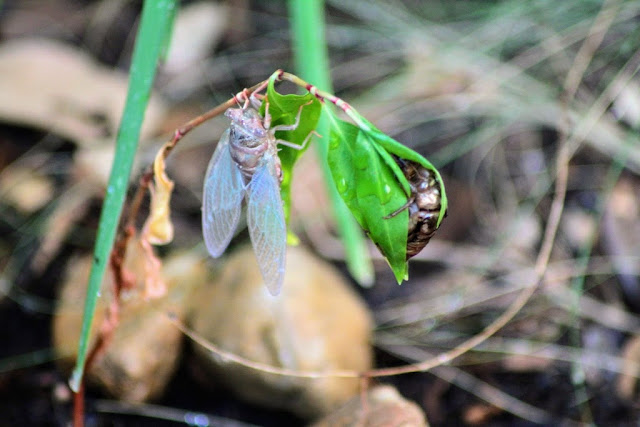 A slightly older cicada on Pomegranate 'Wonderful' branch.  It was the bird's nest wrapped in a recycled plastic bag which first caught my eye.  We live near a busy road and commercial center so there's usually a supply of plastic bags around which we try to keep picked up.  I've walked by this tree a number of times without seeing the nest tucked in there.  Observing the nest let me see the cicada as well. 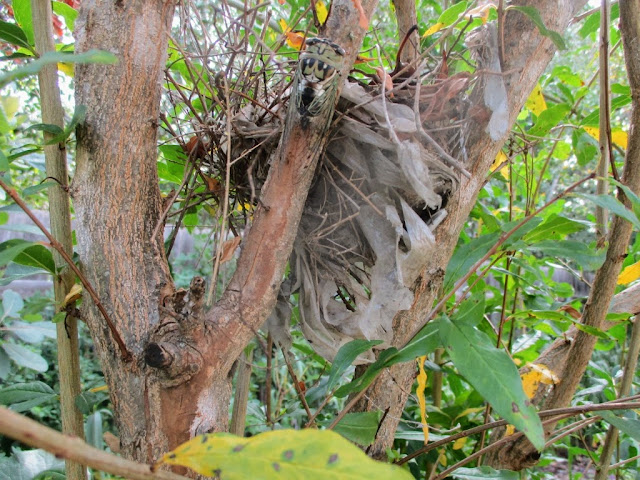 Cicadas usually stick around for about four weeks after emerging from the ground.  They are noisy!  Those transparent wings are cool. 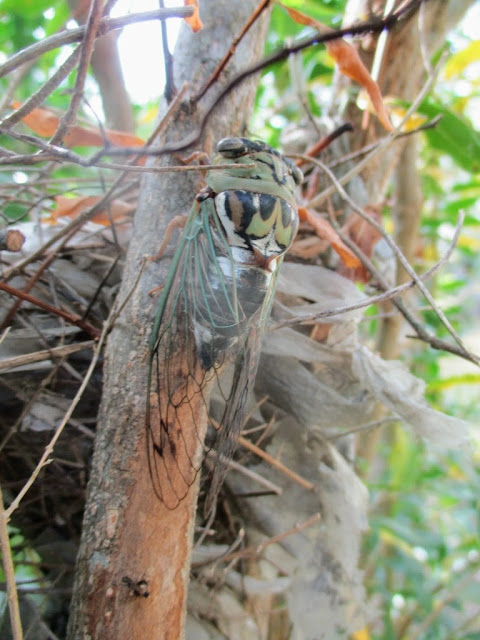 Tiny anole keeping to the shade on cool stone near the hose bib.  It was smooth-skinned and I also saw a green one so these are not likely invasive brown anoles. 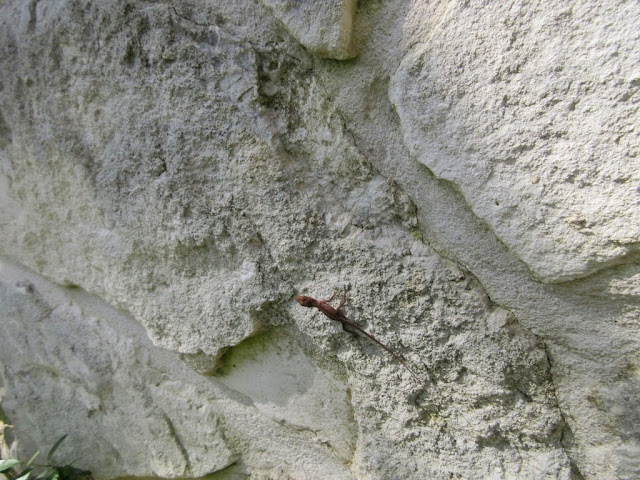 It's too hot for a GIF this month.  I stationed myself in the shade for a while but GIFs take time to set up.  So we'll move on to the deer report.  It's time to protect plants from antlering.  All this velvet will soon be rubbed off on whatever is handy including young trees, agaves and many other unsuspecting plants you might have in the garden. 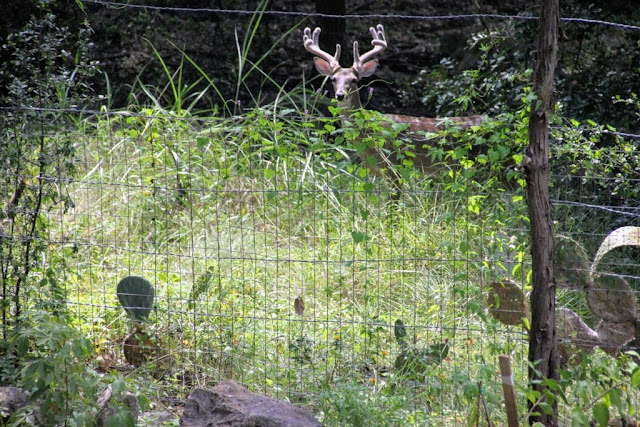 After the velvet is gone, he will stick to the woods where his antlers will be disguised as twigs.  Right now he's here for the water we leave outside the gate during hot dry weather so he's not as shy. 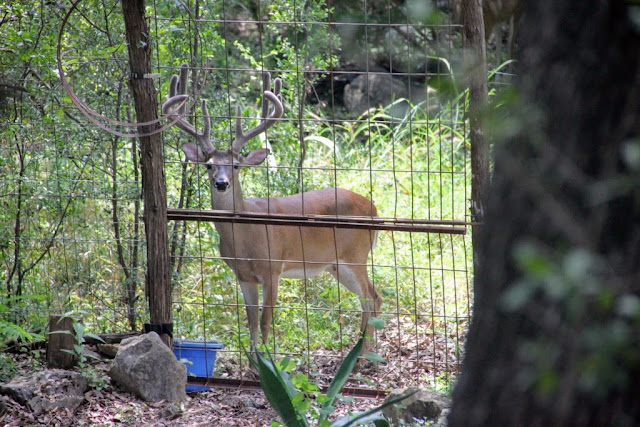 The same for these ladies which prefer to rest in dappled shade.  Scratches on her hide are hoof marks from mating. 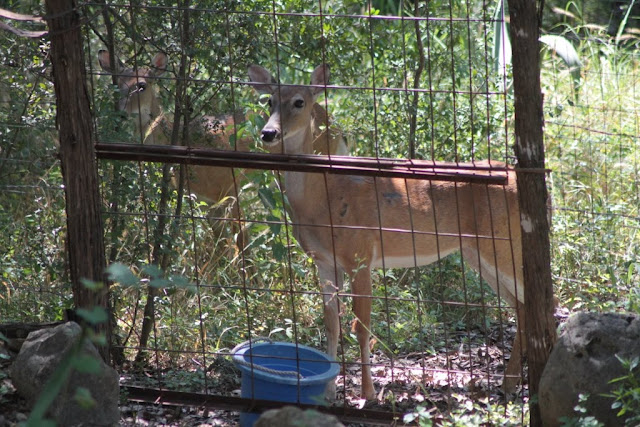 That's the wildlife report from my garden the past month.  You'll find more wildlife posts in the comments at Tina's blog.  Try a wildlife post of your own if you're a blogger.  It's fun and I'm often surprised by how many wildlife photos I've collected when I sit down to create my post.
Posted by Shirley Fox at 8:15 PM 6 comments