This past Saturday I volunteered at our local Watersaver Landscape Tour.  The gardens were exceptional and we had a great crowd.  I'll show you my view of the tour in future posts but first I like to tour my own gardens at the same time to see how it would go.  The landscape tour, usually held in October, was moved to April this year due to weather.  It's been a while since I took you on a walk around my own gardens, so let's see what visitors would see if they toured my garden over the weekend.

Bright yellow Damianita makes for a cheery welcome at the front walk.  Damianta blooms like this several times a year and is evergreen which is why we replaced 'New Gold' Lantana which fell short in both departments.  My new Yucca rigida is settling in nicely. 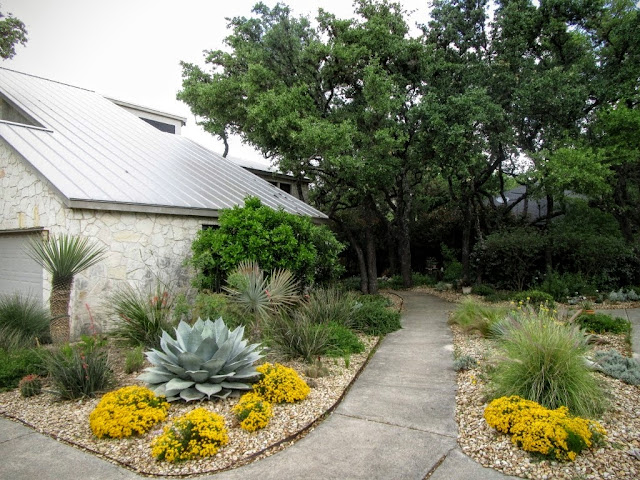 I'm adjusting my usual tour pattern and starting with the star of my front garden today in honor of Moby, Pam Penick's Agave ovatifolia, which has sadly begun to bloom.  Agaves bloom just once and die.  Following Pam's "Moby" posts on her blog Digging inspired my own interest in adding one to my garden.  You can follow Moby's bloom daily on Pam's Facebook page or see her post at Digging. 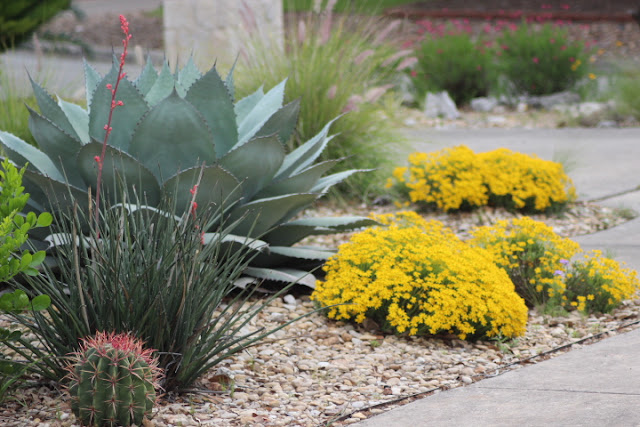 So here's to Moby going out in a spectacular way. 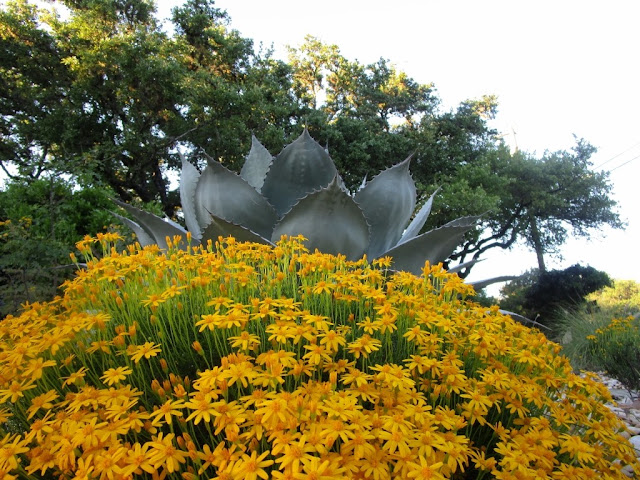 While most information on Agave ovatifolia states that it does not offset, I was surprised to find an offset in the nursery pot back in 2010 when I planted mine.  We carefully separated and nurtured that precious pup for five years before planting it out in the front gravel garden last year.  Now about six years old, it's to the left of the large white stone as a "spare" against the day when mine goes the way of all Agaves. 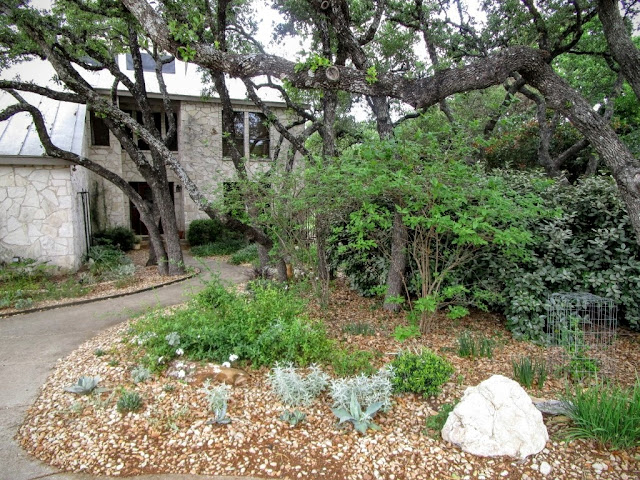 Look closely to see our neighbor's Agave americana is sending up an enormous bloom stalk. 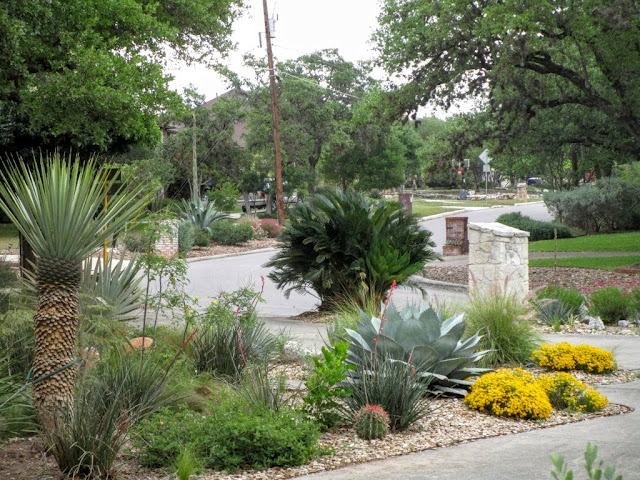 Now we'll step back a bit to take the long view from the street where we usually begin our tours. 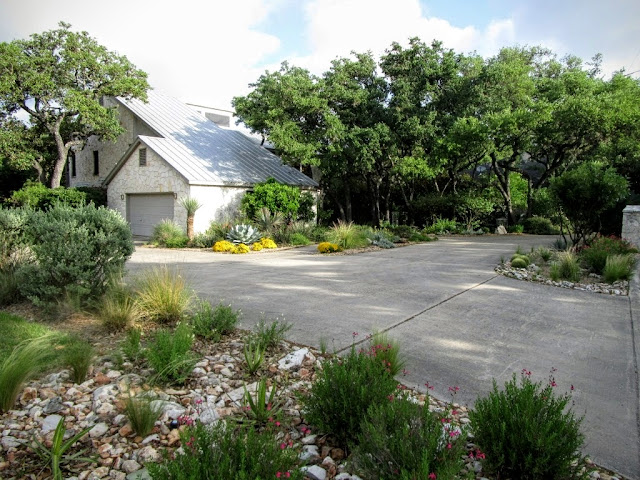 Moving across the front for a different view.  I think I should add a few Damianita to repeat the color across the landscape. 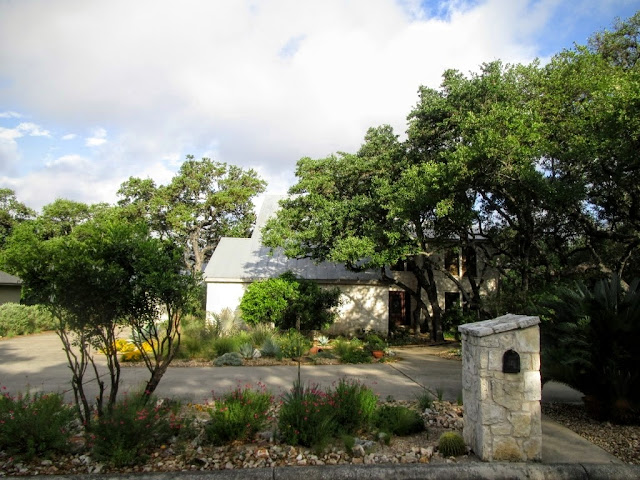 Yucca rupicola bloom stalk has emerged and is beginning to set blooms. 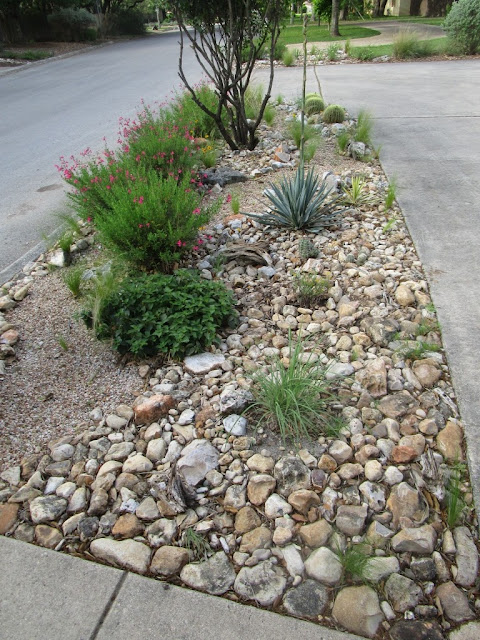 Jerusalem Sage in the island bed is producing multiple blooms for the first time.  Planted three years ago it seemed to take forever to grow into a mature plant.  It's sure to become a favorite since it needs zero attention to look like this most of the summer. 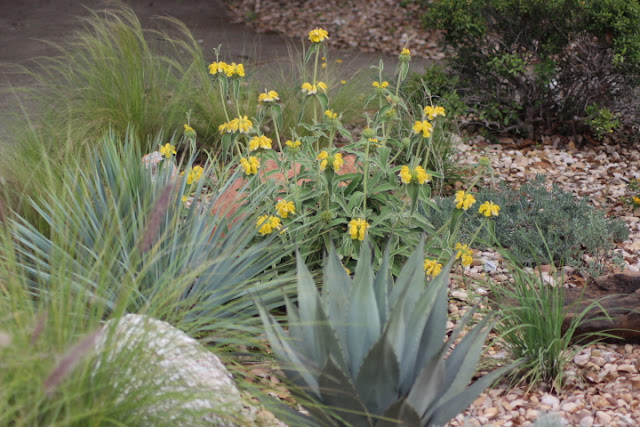 Yucca 'Color Guard' pups have replaced larger ones which died over the winter.  I'll have more on that story in another post.  Opuntia 'Santa Rita' blooms bright yellow against that gorgeous purple hue. 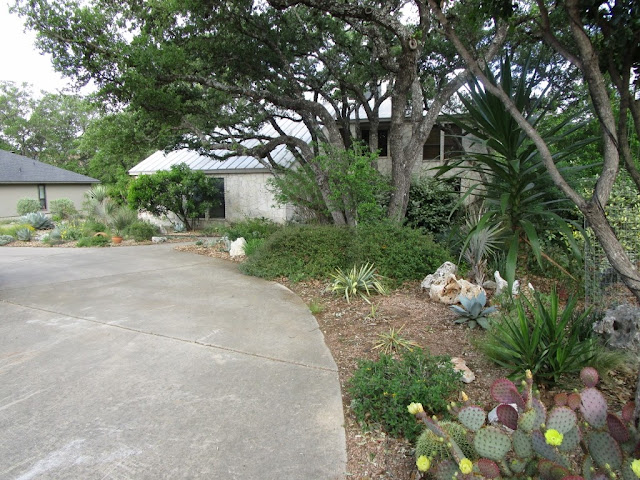 The shady front garden functions as a courtyard walled in by silvery shrubbery. 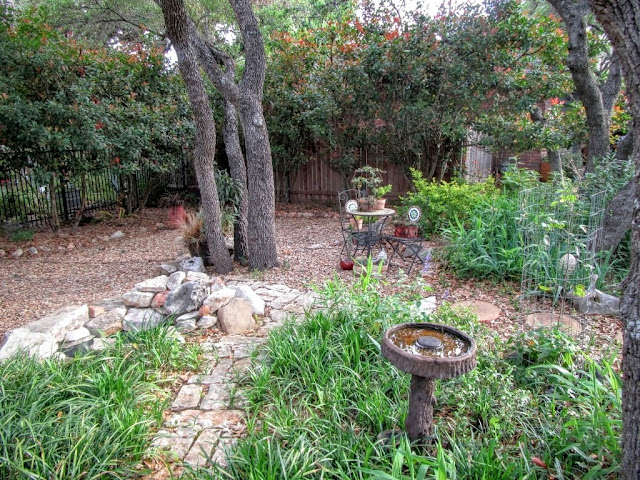 Not many flowers here by design though there is a Canna blooming.  I've begun to bring out non-hardy plants in pots for summer display. 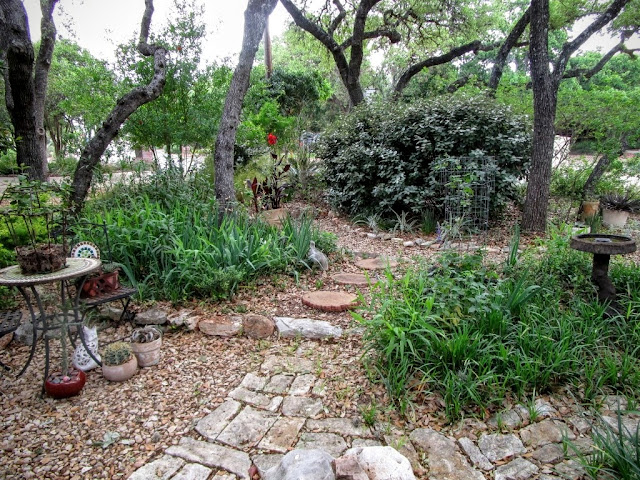 Through the fence to see the buffalo grass is greening up 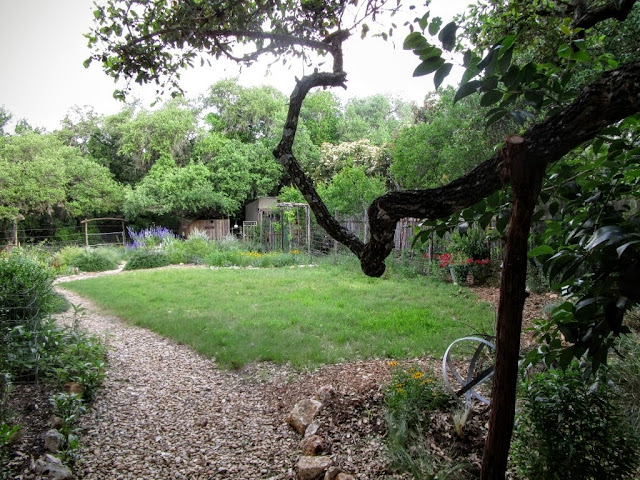 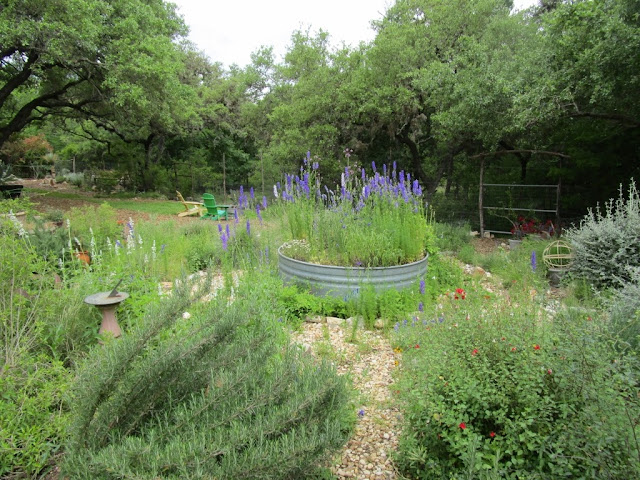 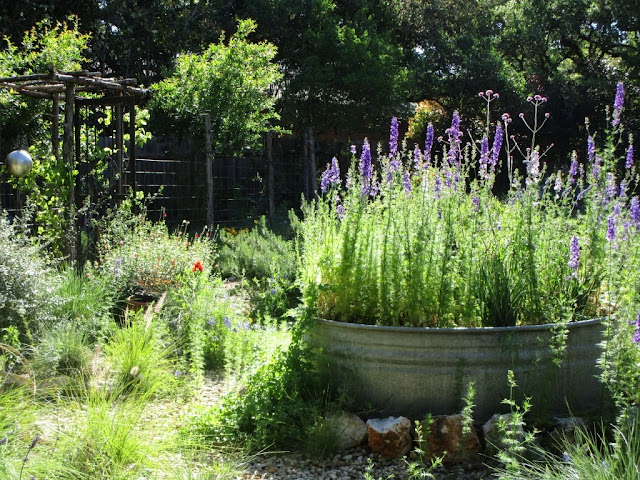 The crevice/gravel garden fills with yellow Greenthread flowers each spring. 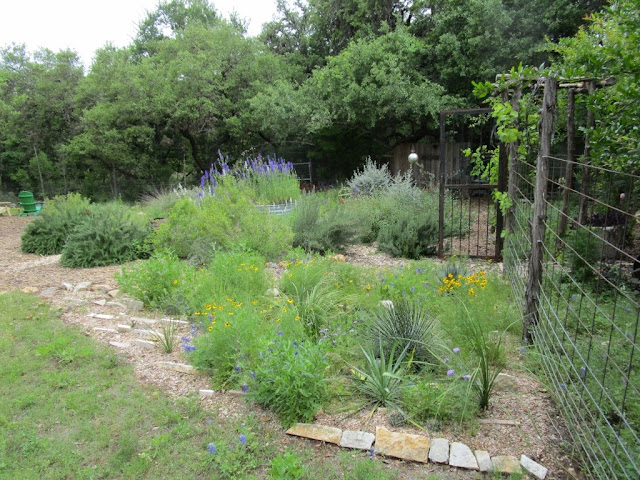 We've added a firepit in the only space with no tree canopy. 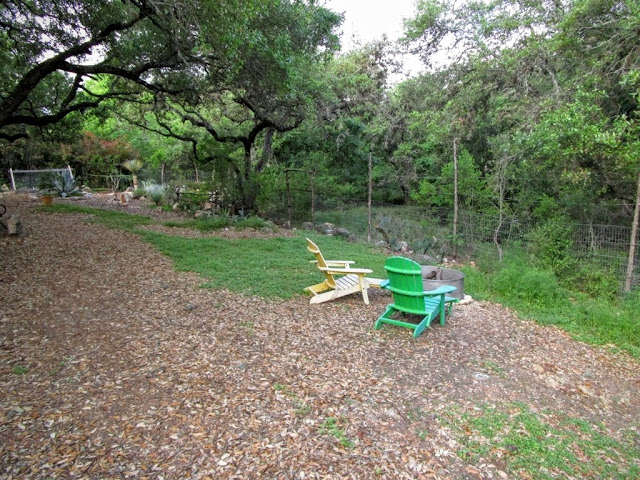 Rock-lined paths lead through a cactus garden in the sunniest part of the yard.  One of the new yuccas looks stressed but it's fine.  Some of the leaves were damaged in transporting and planting so they've turned brown and we'll cut those off as new ones grow in. 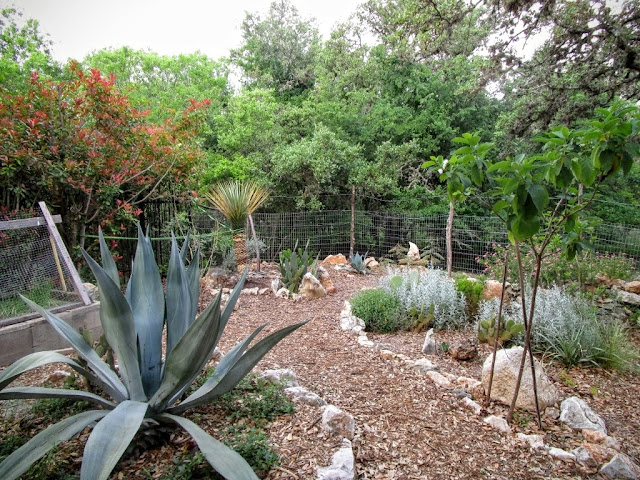 Looking through the gate on the south side of the house with those arching trees.  Sedge on both sides of the path beginning to fill in nicely.  I would tidy up the pot ghetto before a tour and clean out the dry creek which requires lifting all the rocks and raking out accumulated leaf litter. 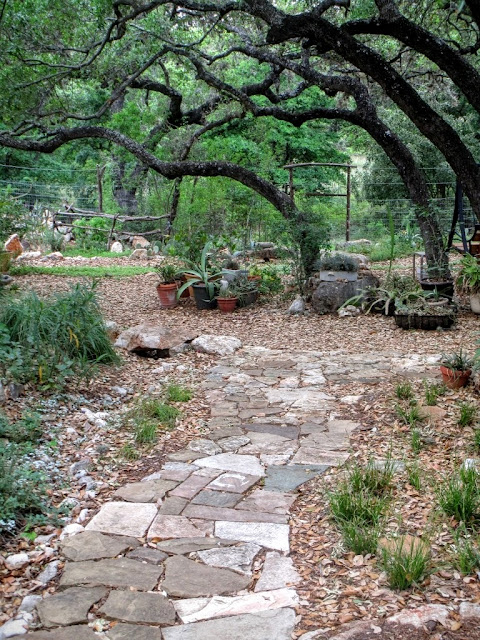 That's the tour for April and it's good to see our hard work paying off now in our 6th year of gardening here.
Posted by Shirley Fox at 8:01 AM