On Wednesday I had to be downtown for jury duty at the county courthouse.  I had downloaded several gardening e-books ahead of time so I was set for the day.   This happens every few years and it's not so bad to spend some time downtown.  By now it's not a surprise to readers that San Antonio has a style all its own.  Many of you probably haven't seen jury duty like this so let me take you along on my two hour lunch break with a few phone photos.

I enjoyed my lunch under a shady ramada across the street on Main Plaza with a view of San Fernando Cathedral. 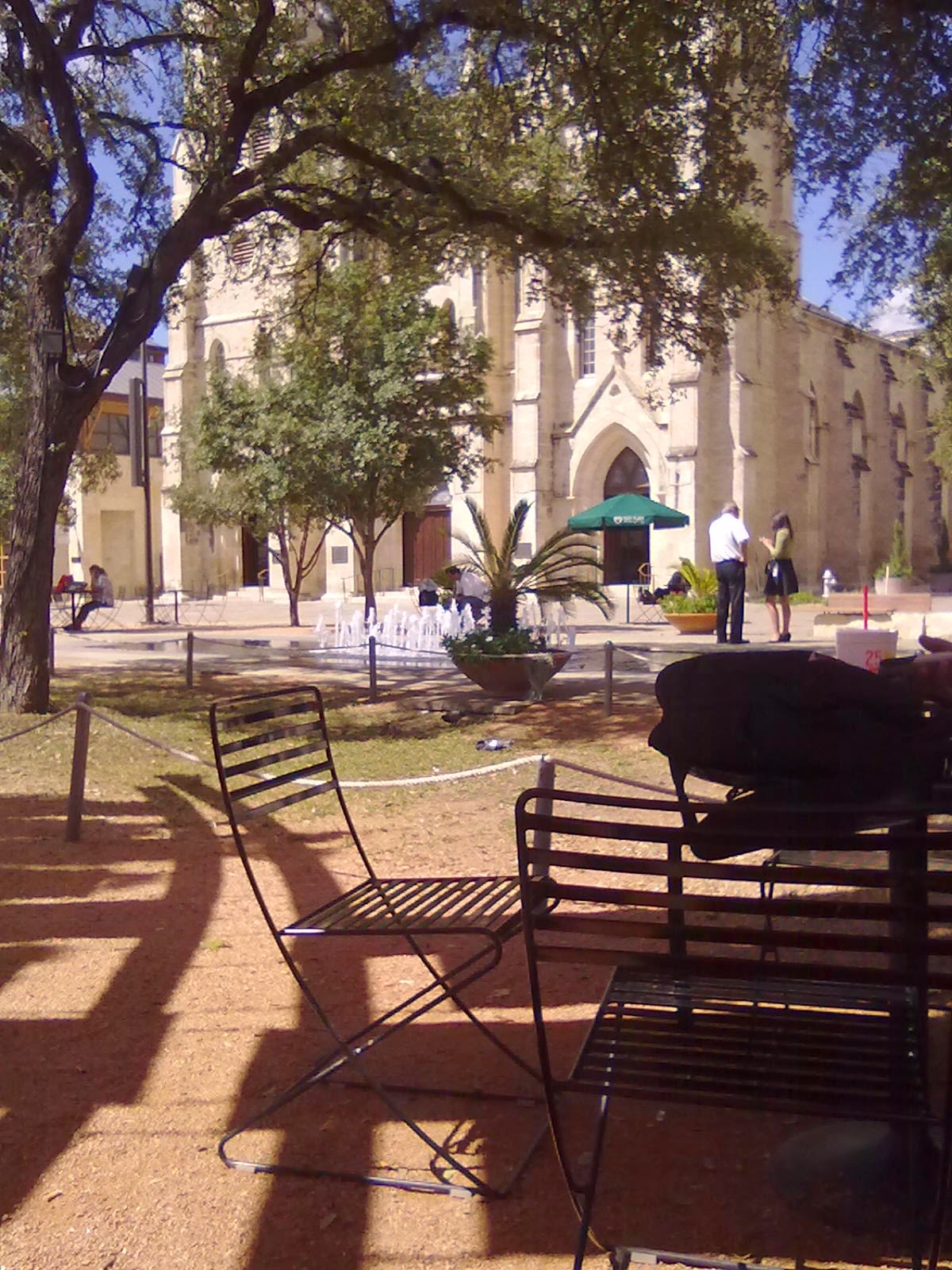 I couldn't find any info but there must be a bell ringer in the bell tower as four different bells were rung three times each to signal the noon hour and then we were treated to a 5-minute bell concert.  I sat through every last note.

San Fernando cathedral was built in Mexico in the early 1700s and remained in Mexico until 1836.  It's been in the United States since 1845 but it has never been moved--any guesses as to why?  Give yourself extra credit if you didn't have to look it up.  Texans are not eligible unless you had to look it up too. 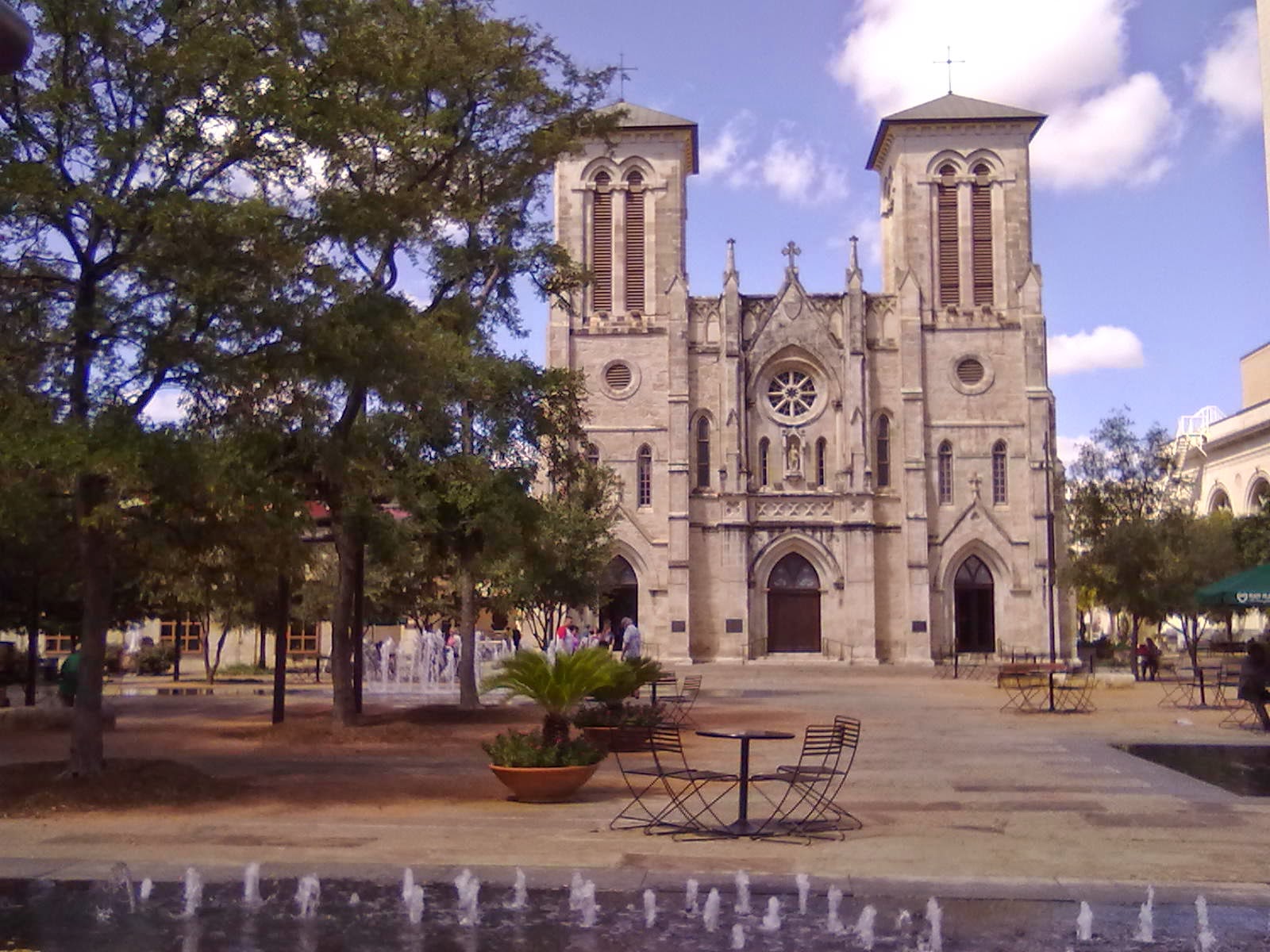 Depending on the source, this is the oldest cathedral in the U.S. or at least the oldest in Texas,  Alamo heroes Davy Crockett, Jim Bowie, and William B. Travis are buried inside.  A nightly laser light show projects images from our history on the building facade.  The show was designed by French artist Xavier de Richemont.   As soon as it cools down we will be back to see the show which opened in June.

A cheerful purple groundcover of shade-loving Mexican Petunias beckoned nearby so I set off to explore the plaza.  Ignore the water hose, I'm happy to see everything so well cared for in the plaza. 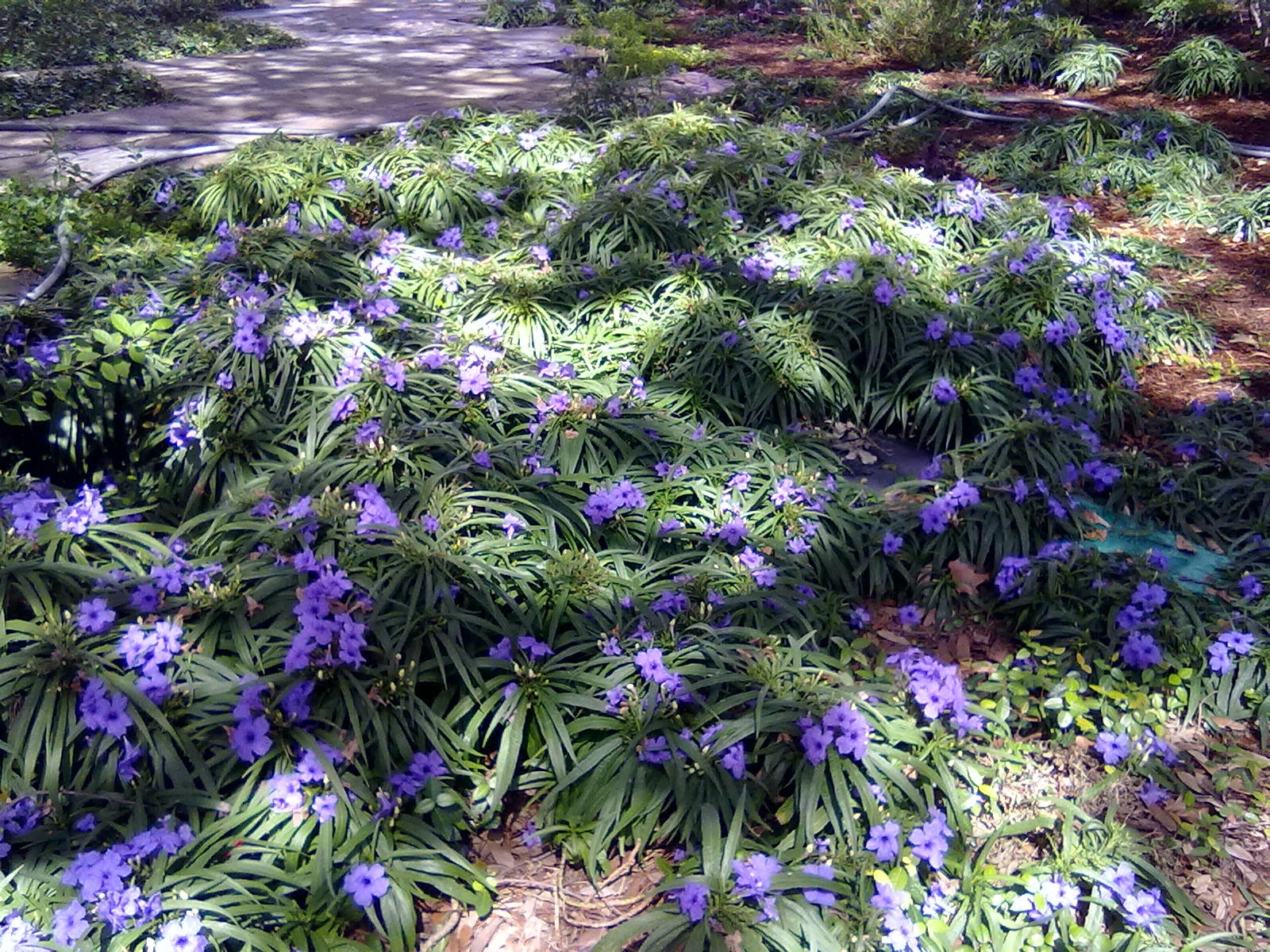 It was hot but breezy as it always seems to be downtown along the river.  Main Plaza is where the dish known as Chili was first served. 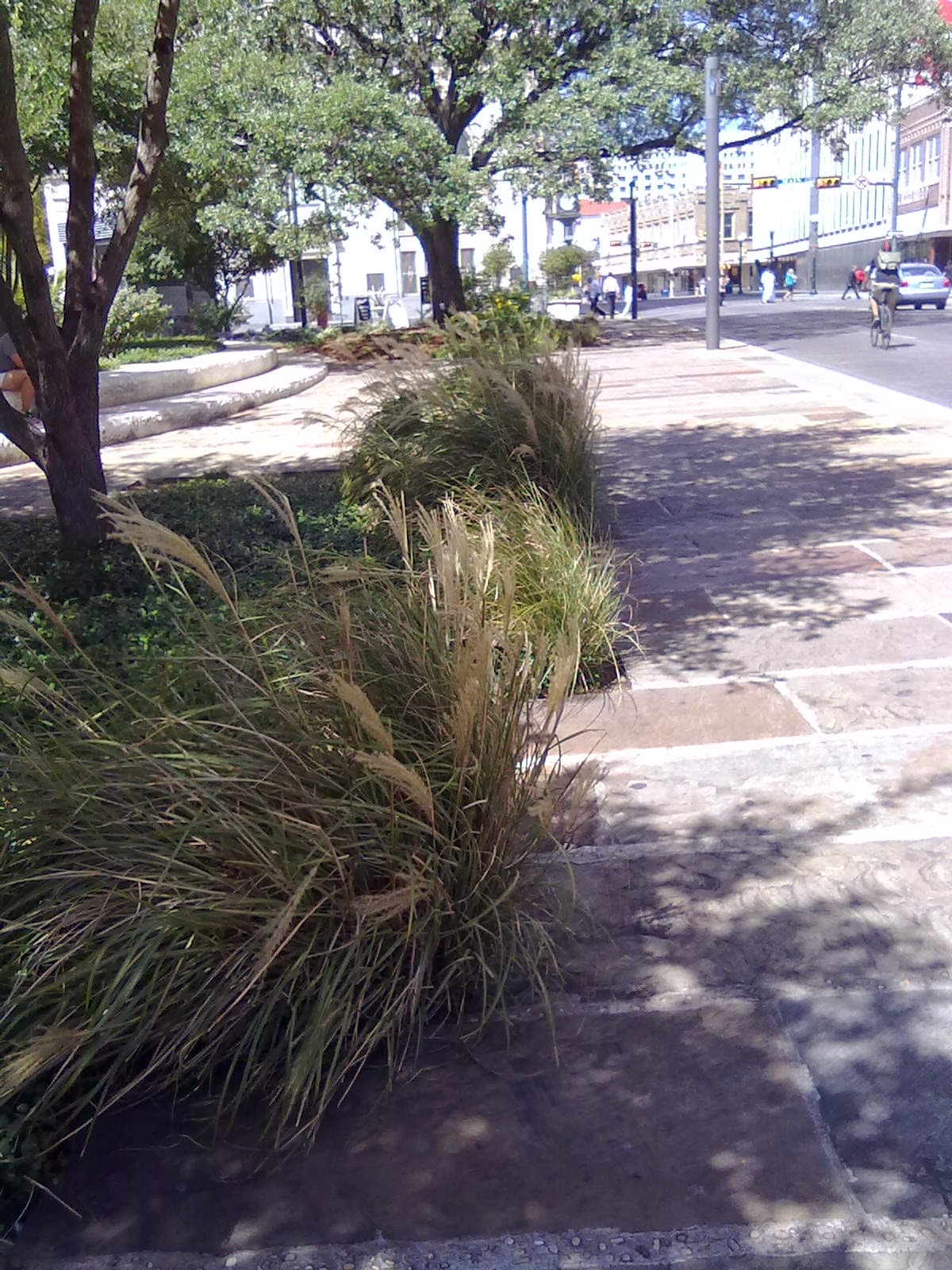 With a two-hour lunch break I walked east toward the river and explored a small garden in front of Main Plaza... 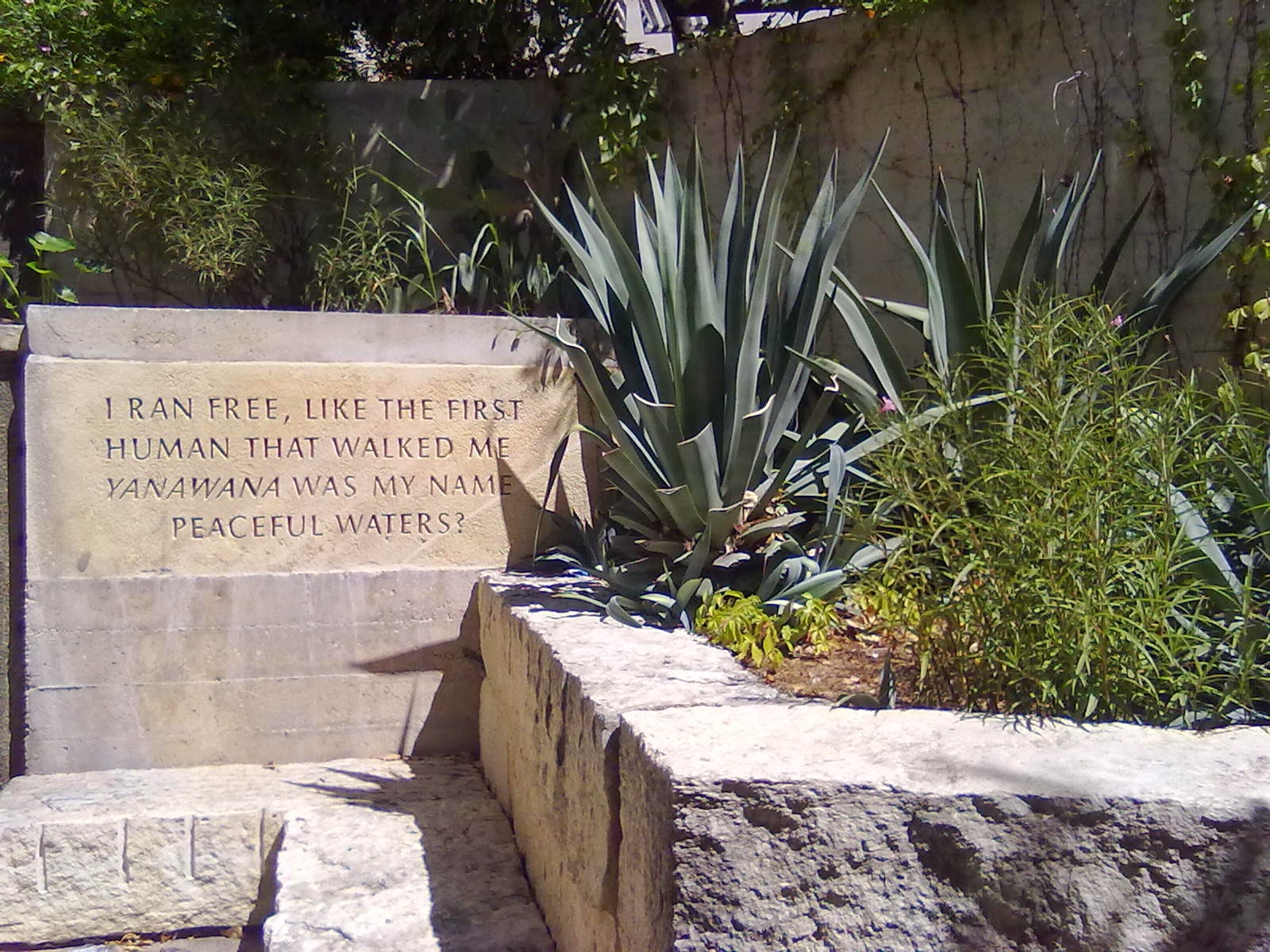 Cacti and Agaves get no respect around here. 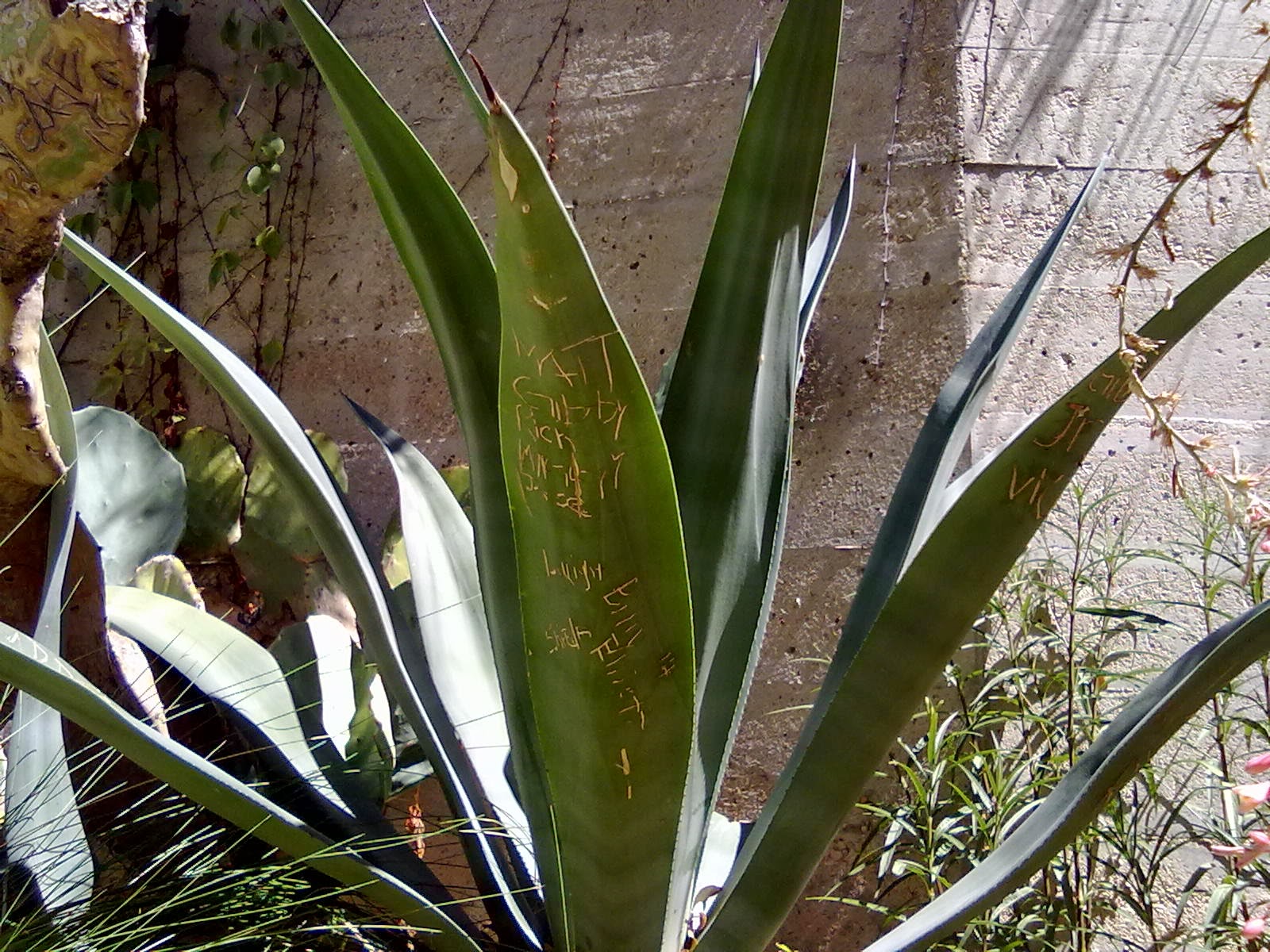 ...and then returned to street level so I could more easily access the Paseo del Rio or the touristy area. 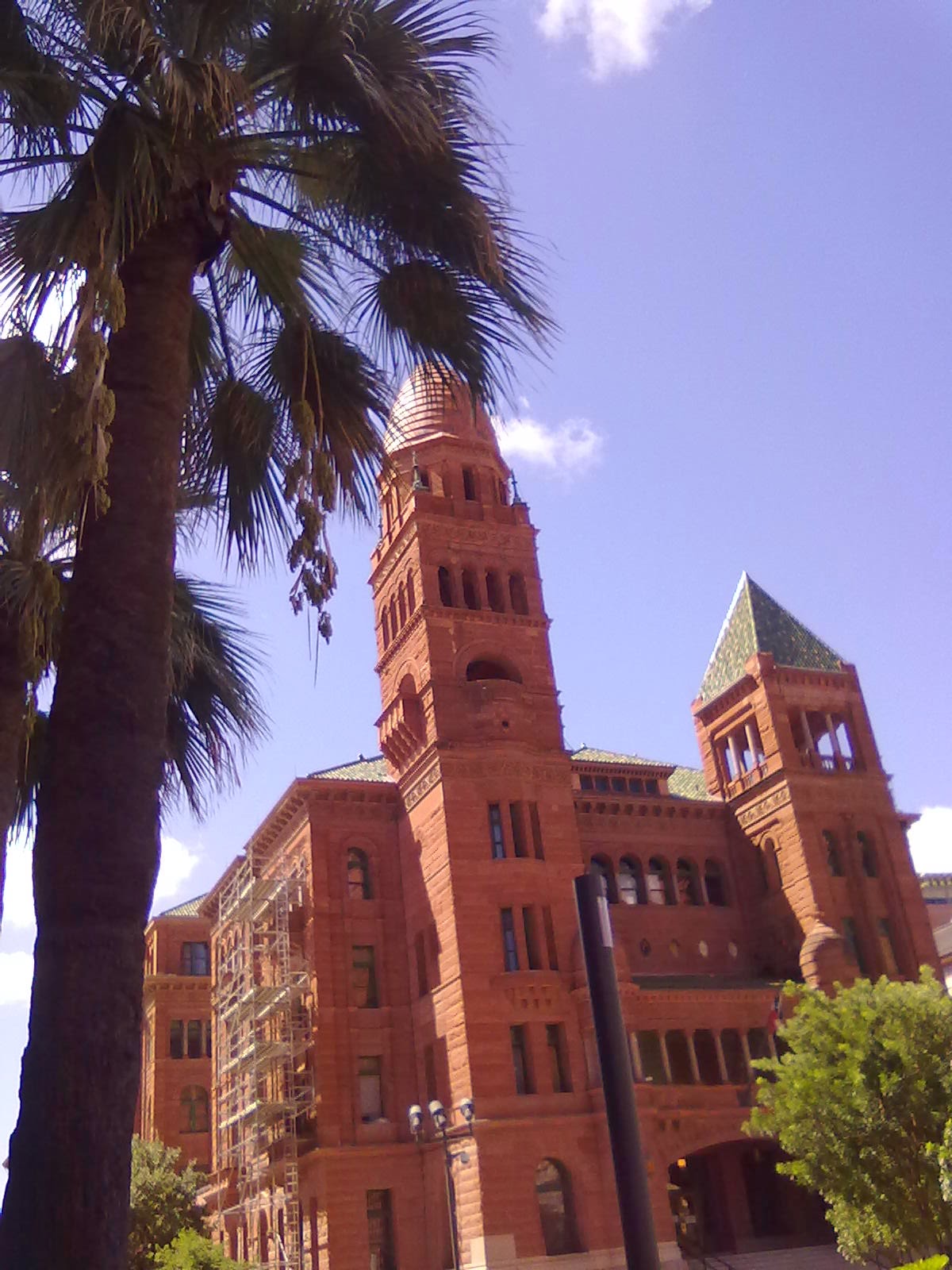 Gardens in front of the old courthouse include blue Plumbago trimmed into boxy hedges.  These should be covered in blooms this time of year.  Still it's quite pretty for a downtown setting. 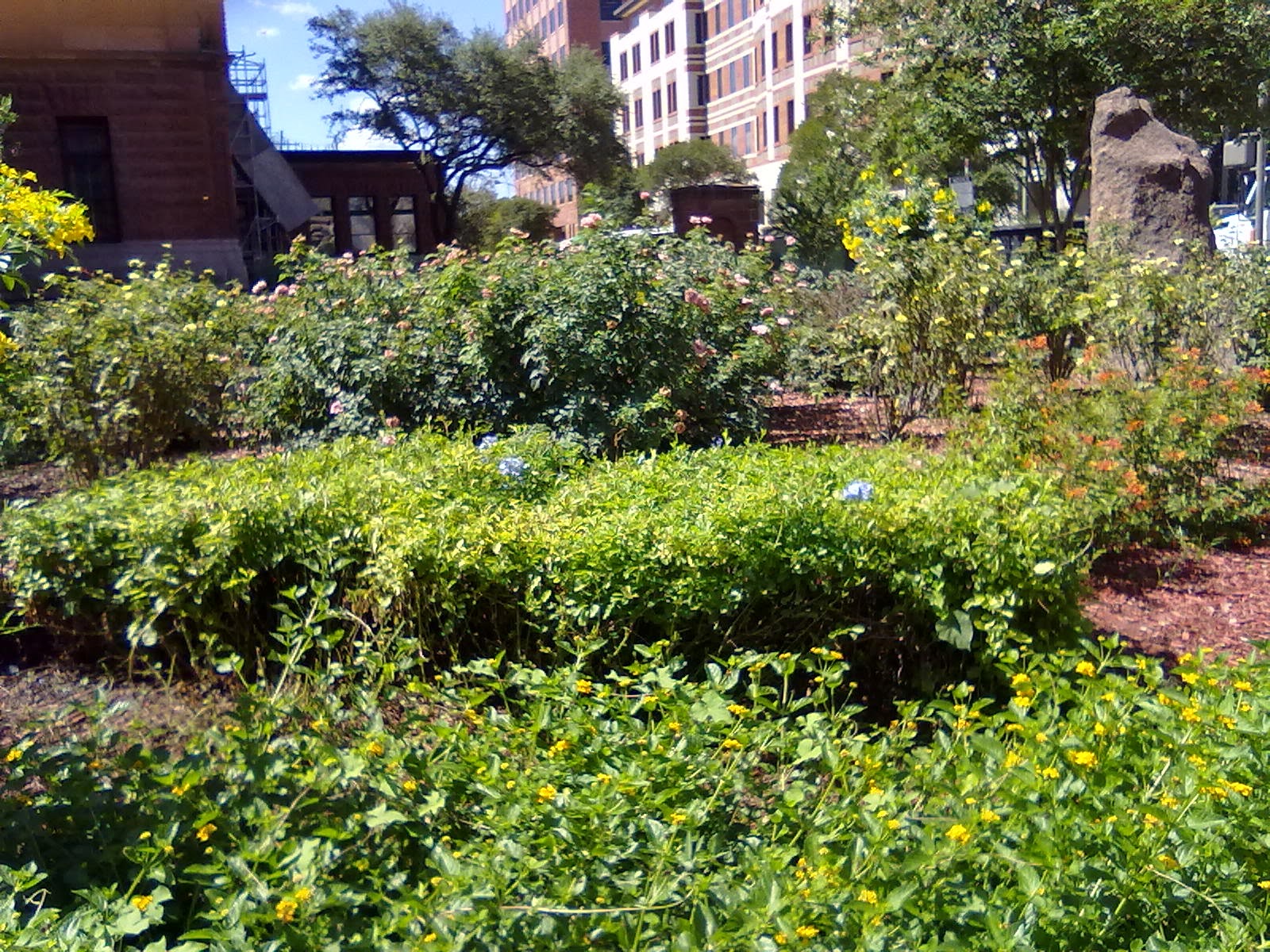 Crossing the street near the courthouse this curbside garden caught my eye.  Lantana covering the curb and spilling into the street.  A narrow space between the walk and curb allows room for soil so the plants grow in ground.  Years ago I worked in a building on the next block you see in the background. 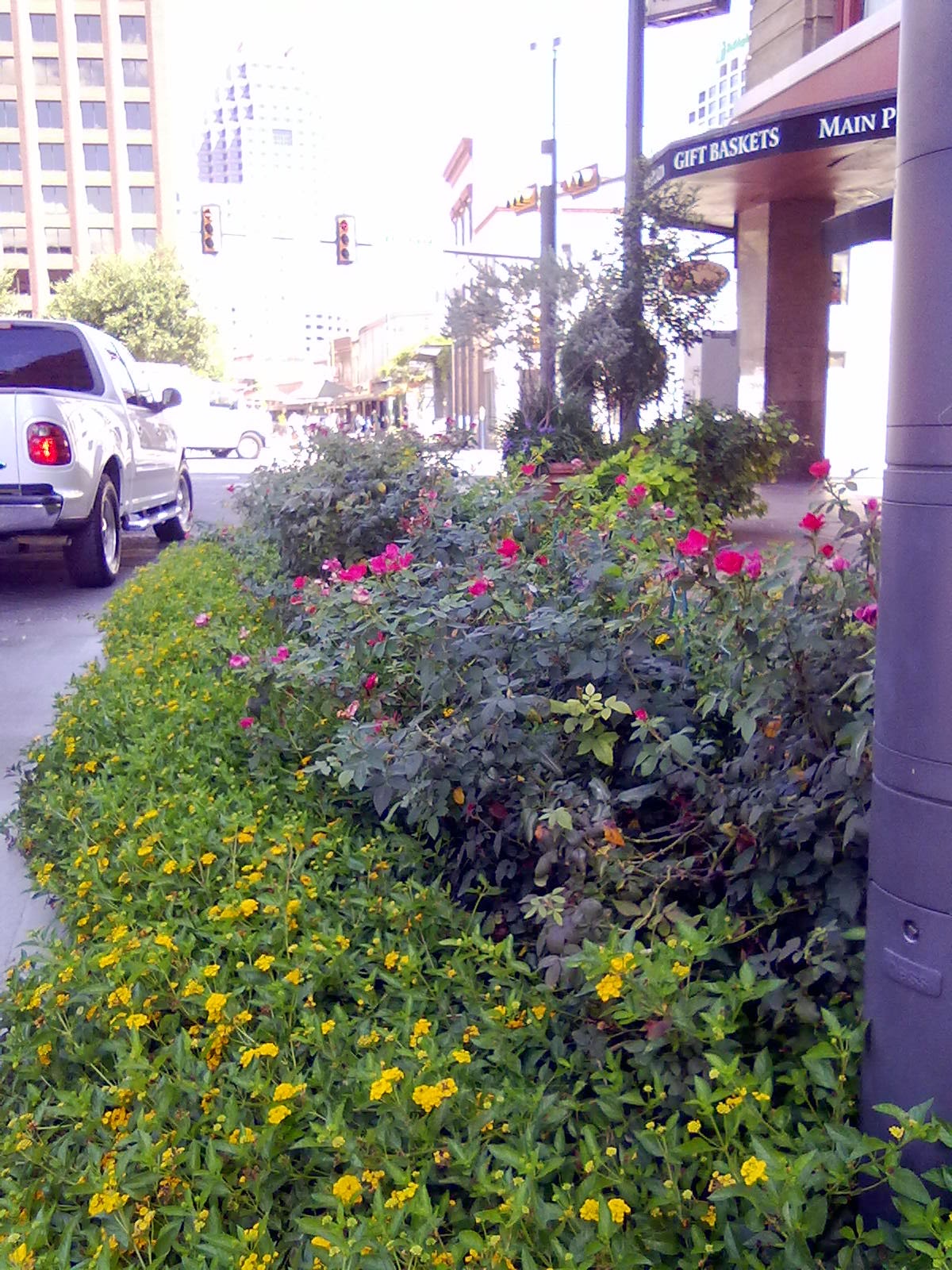 Someone likes to garden. 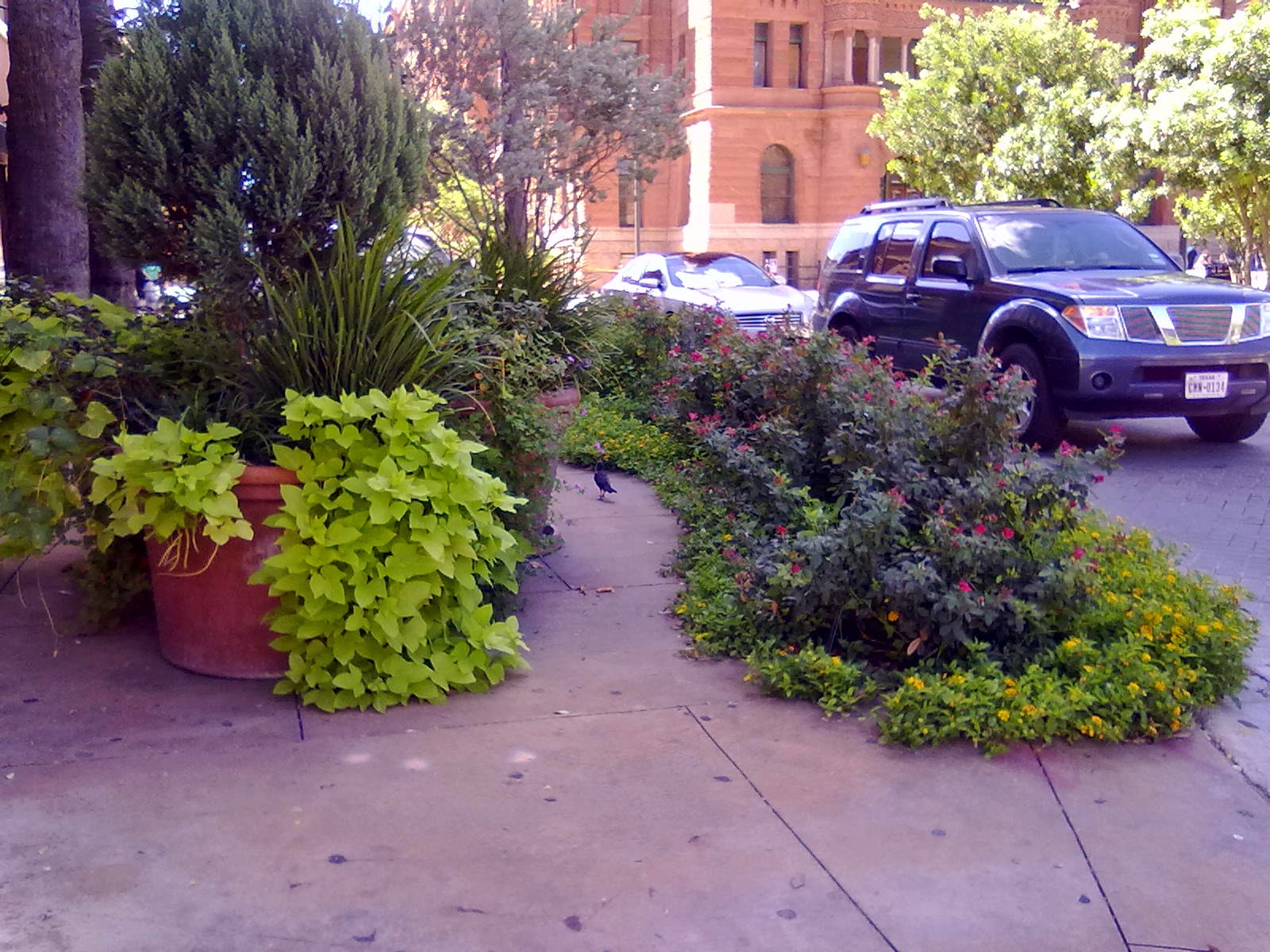 Probably someone in this apartment building. 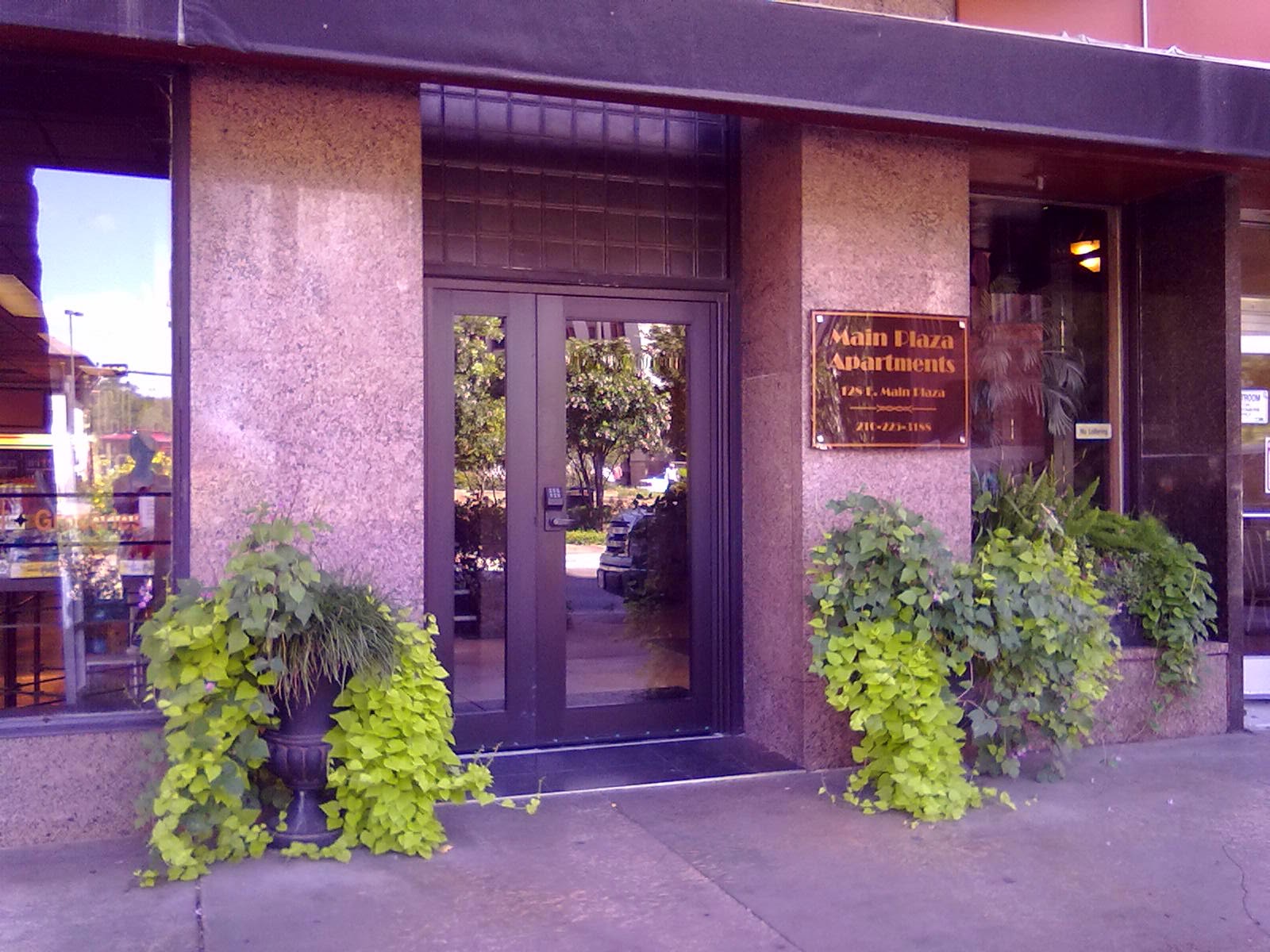 Nice view from inside the cafe next door. 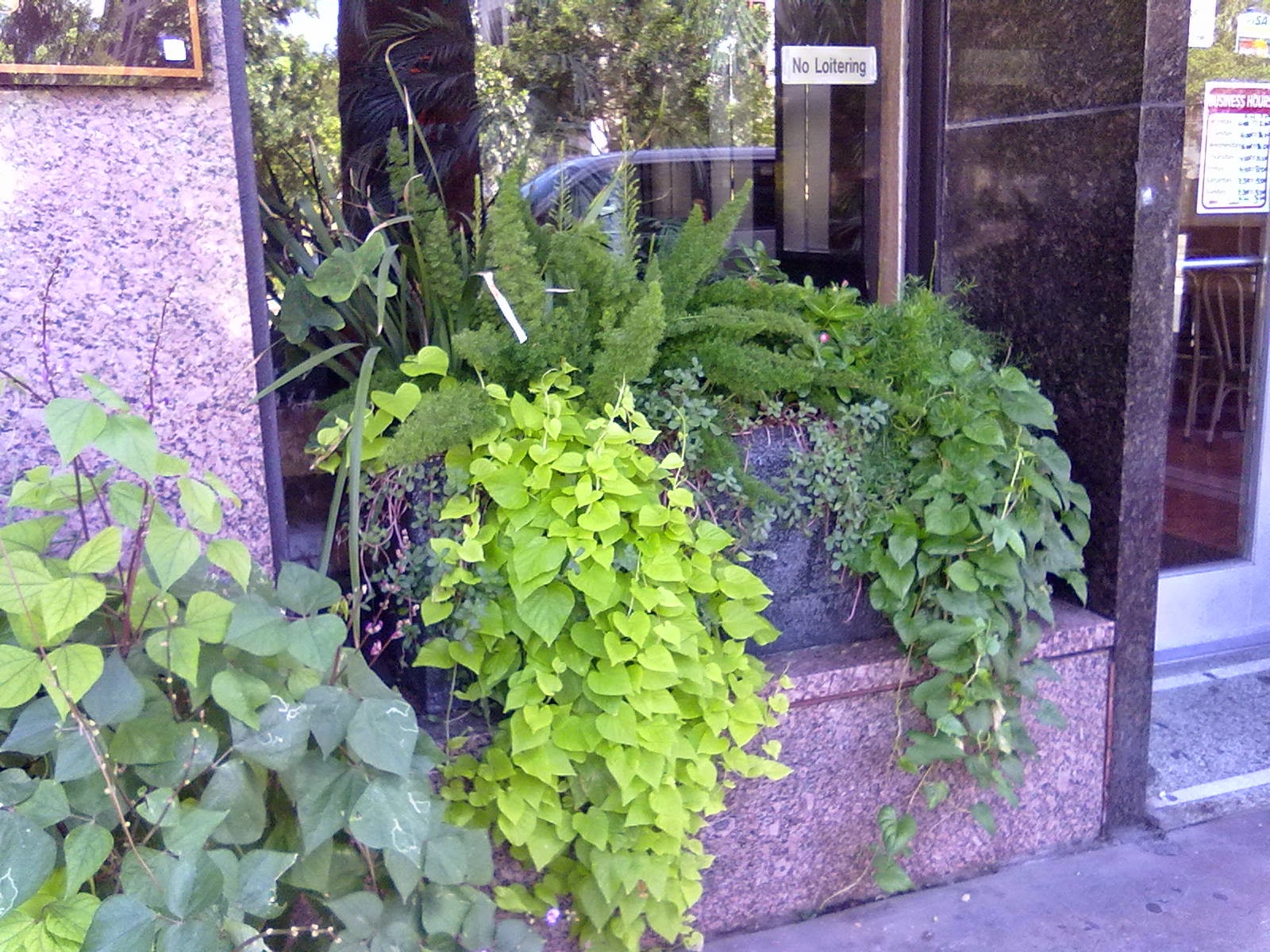 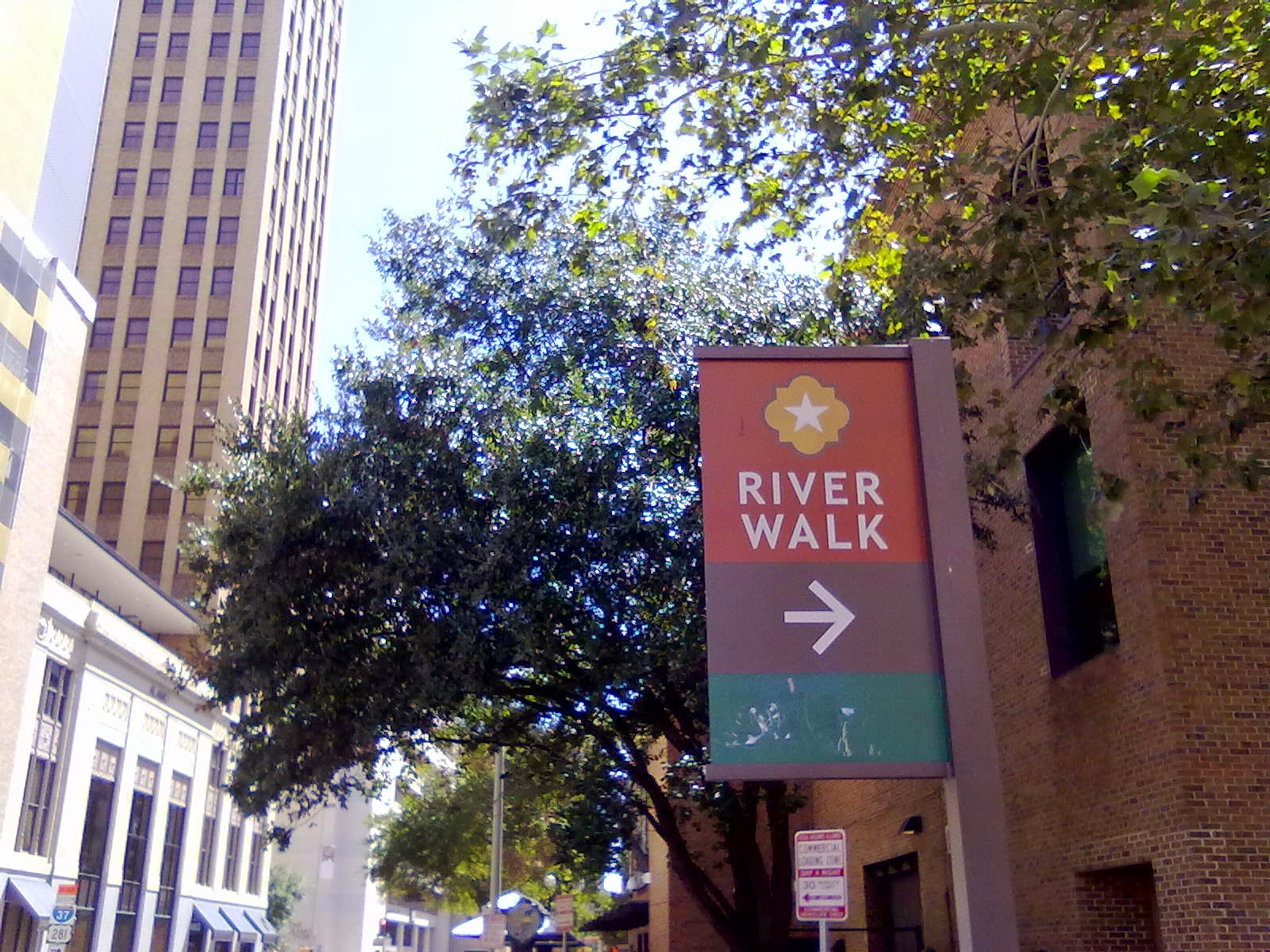 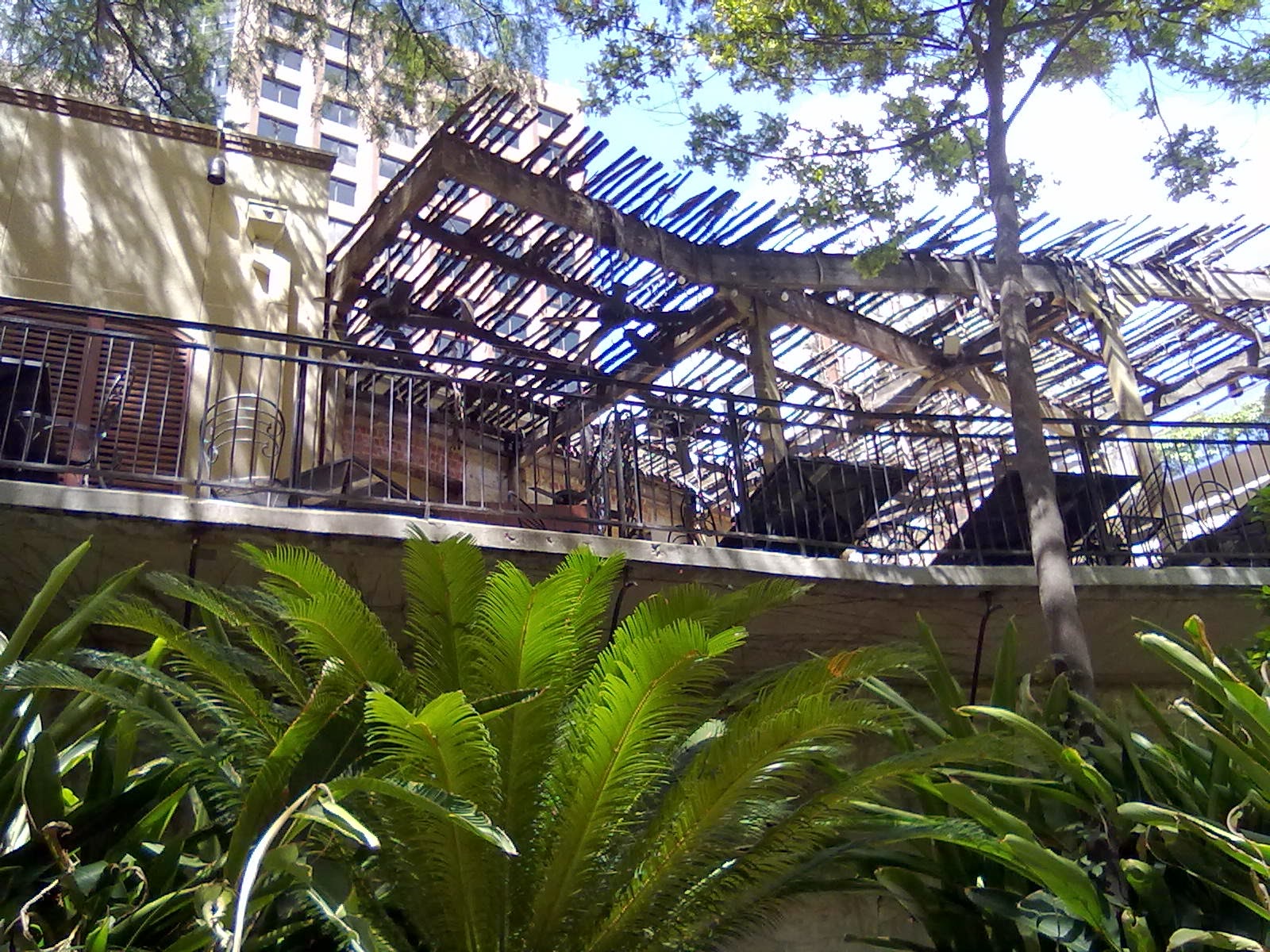 Touring the river in one of our famous river barges. 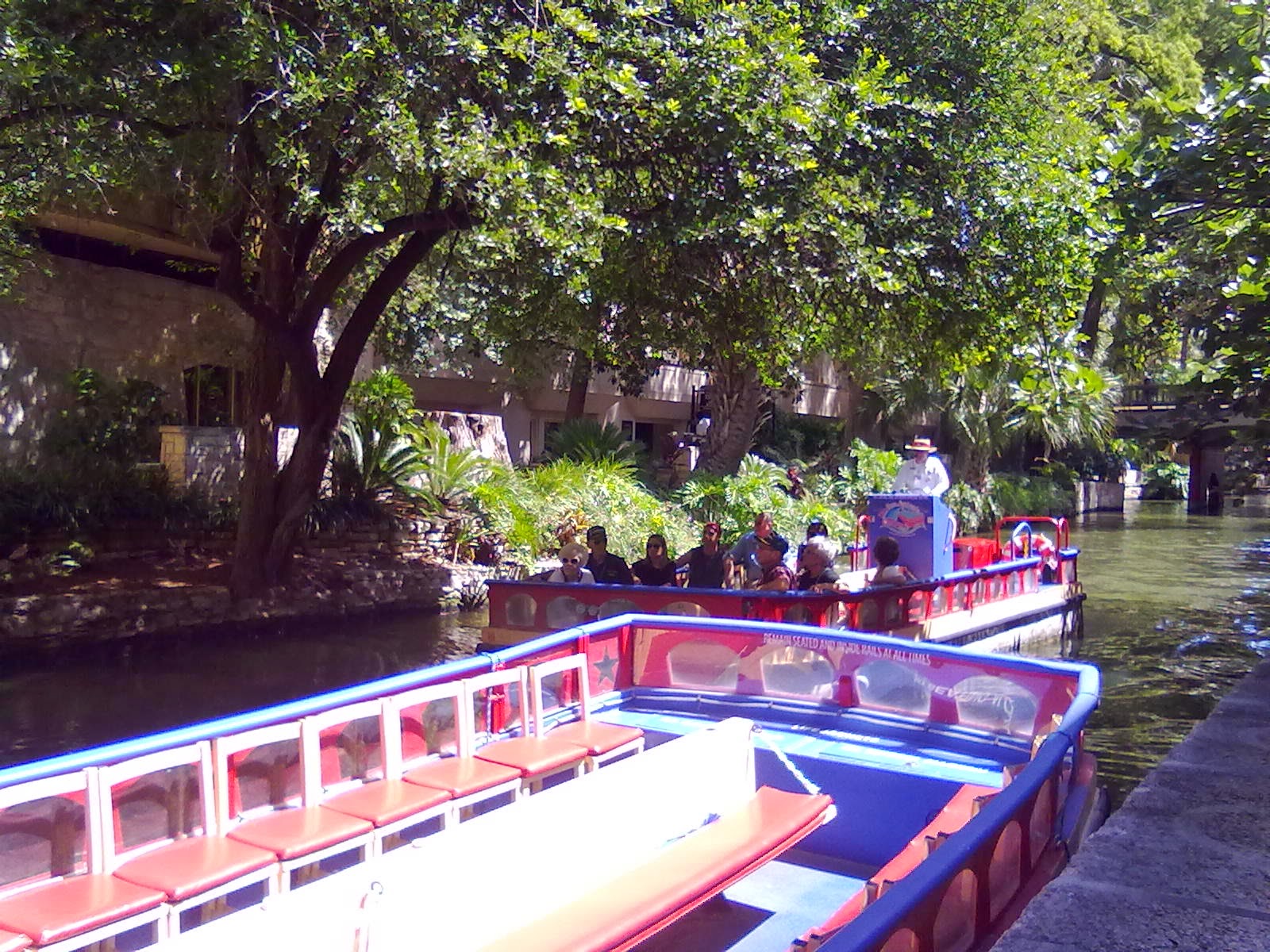 He turned the barge around.  Quite skilled he didn't bump the sides once. 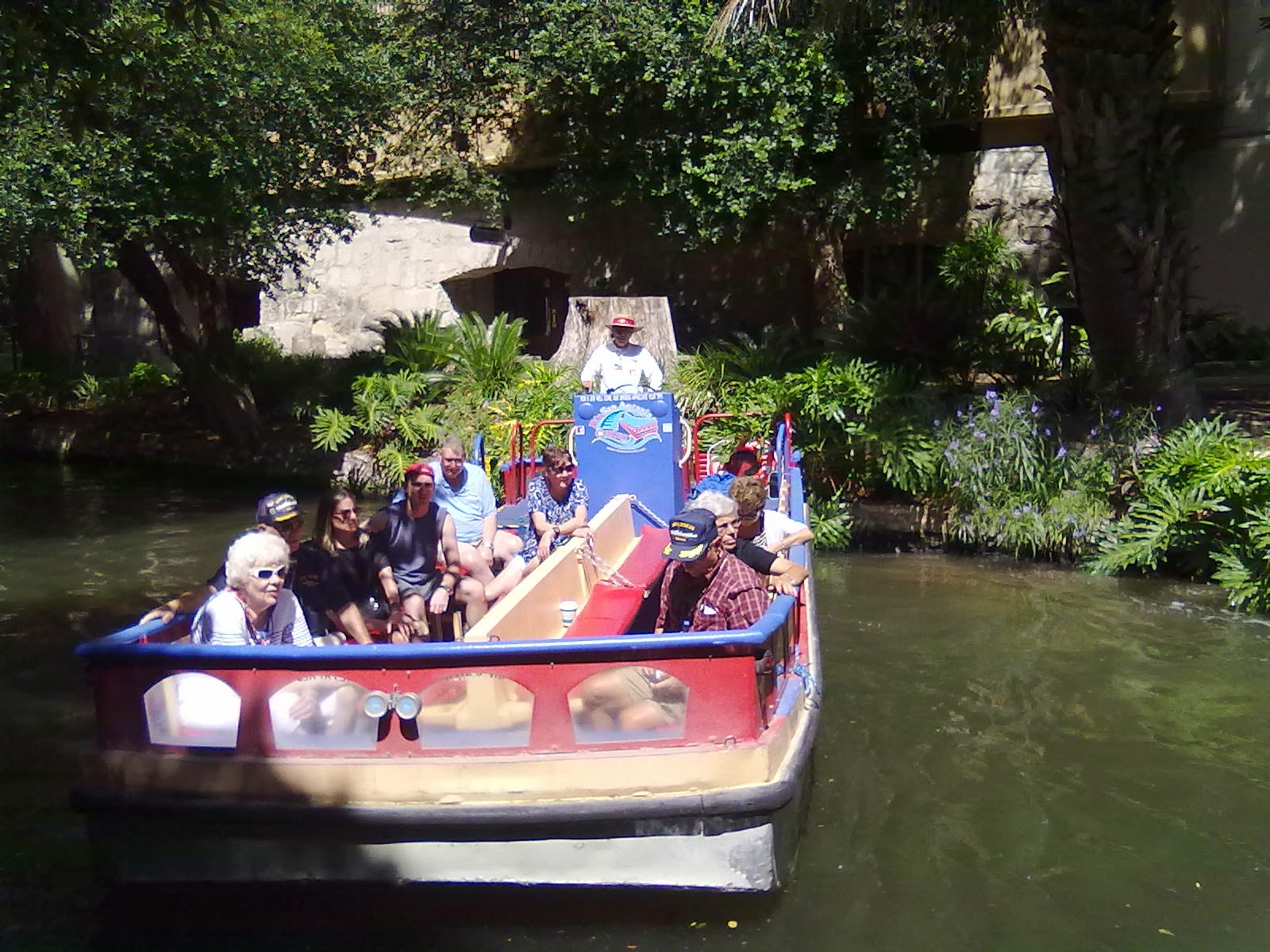 One of those iconic stone bridges. 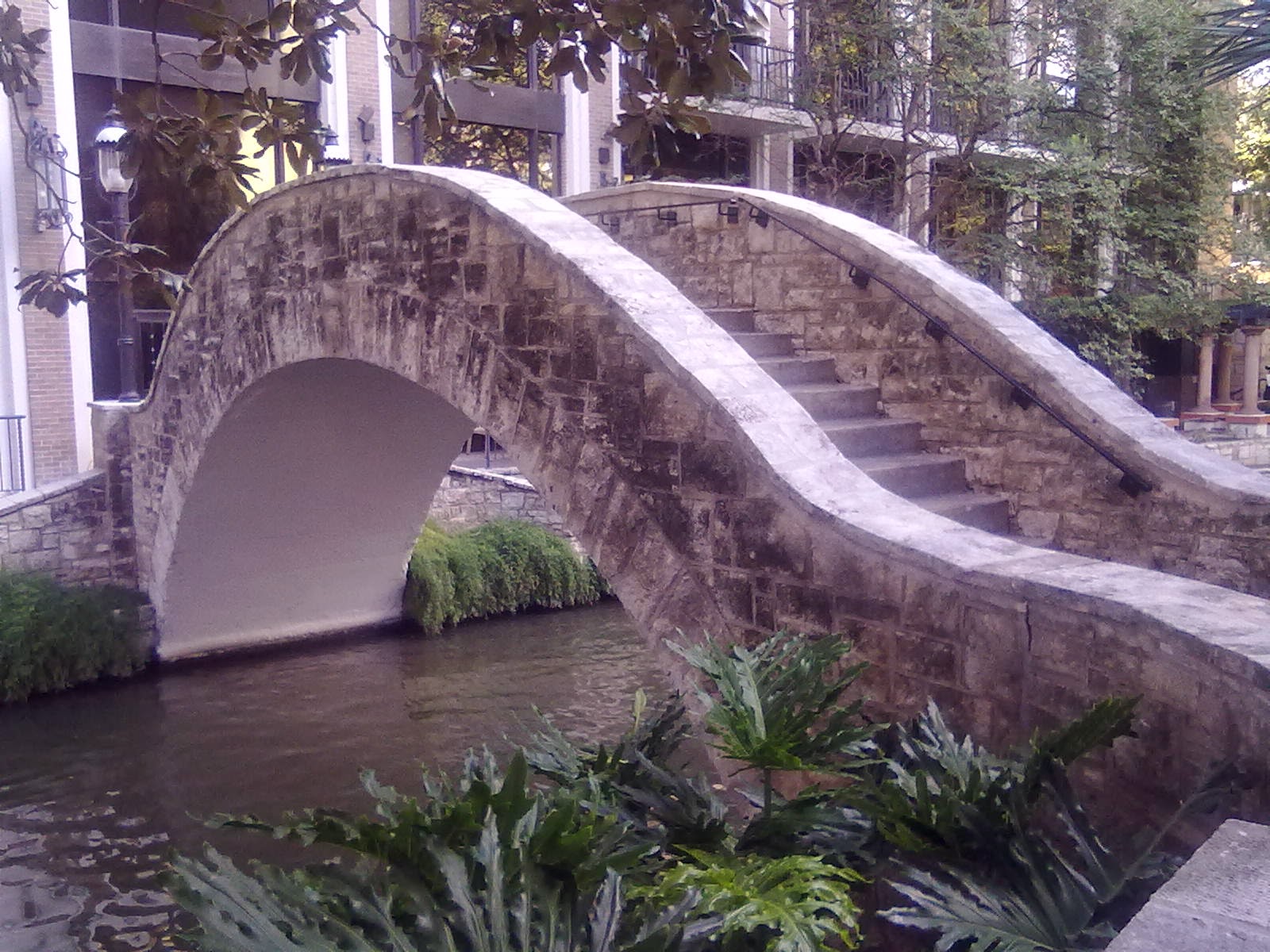 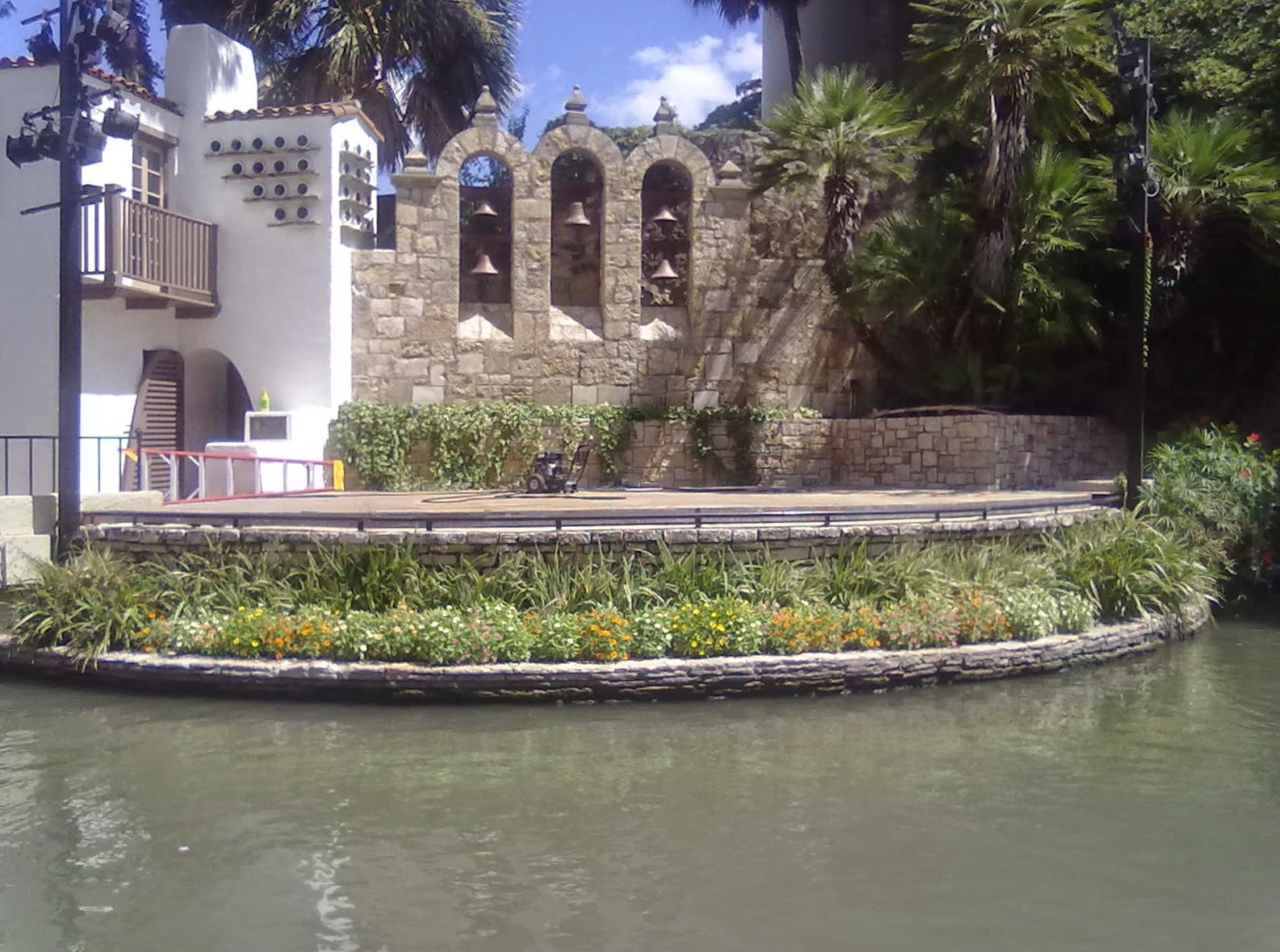 The audience watches from the grassy steps across the river. 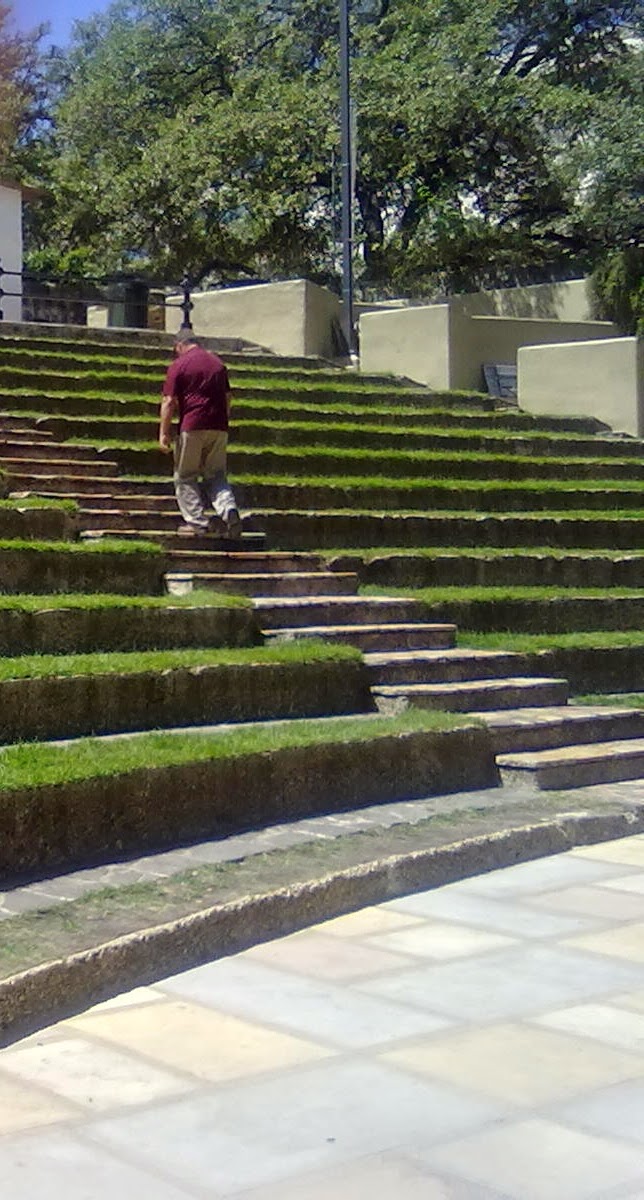 I could follow the river back to the courthouse but I still have some time remaining. 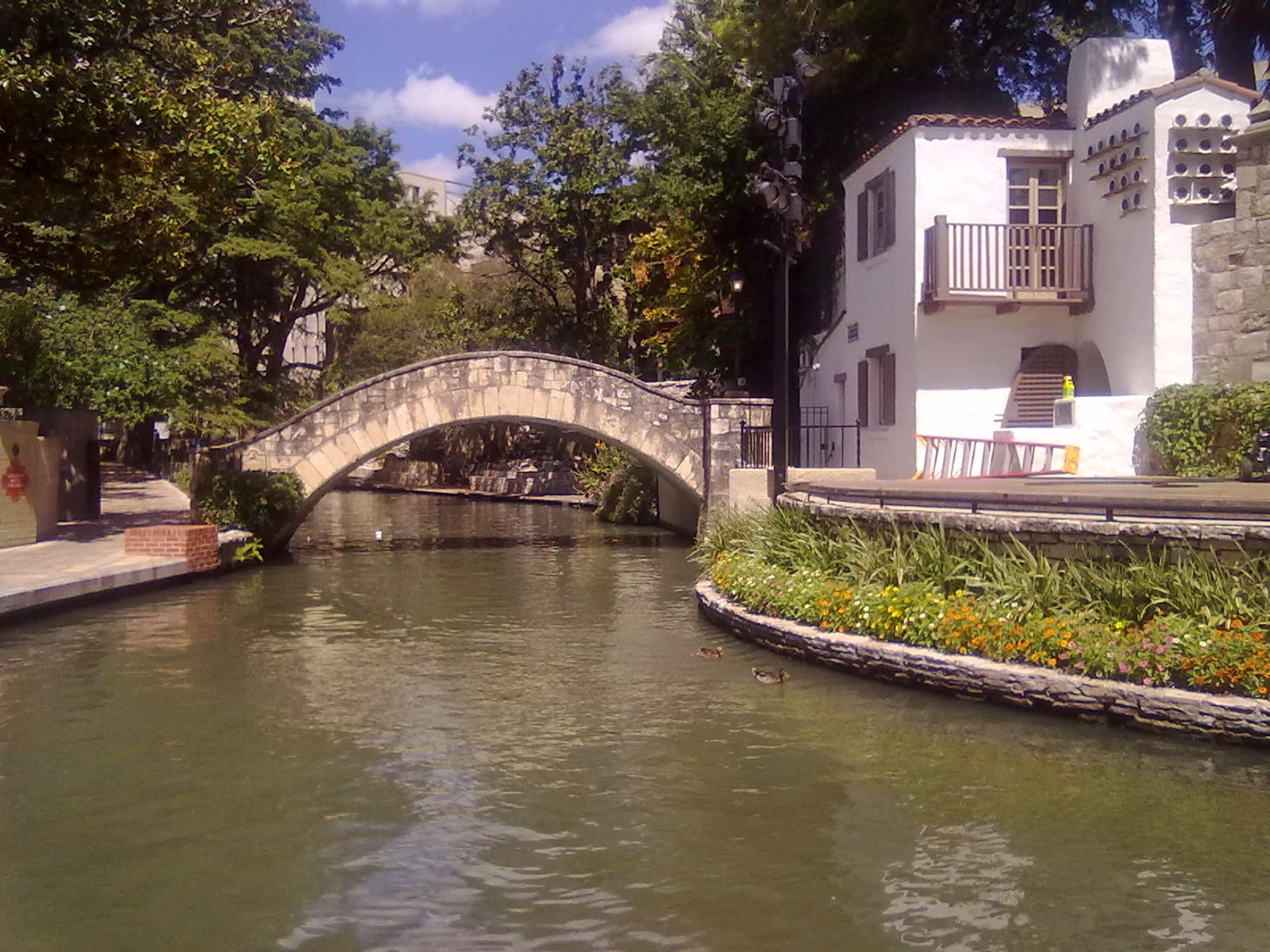 I head up the steps to walk the charming streets of La Villita... 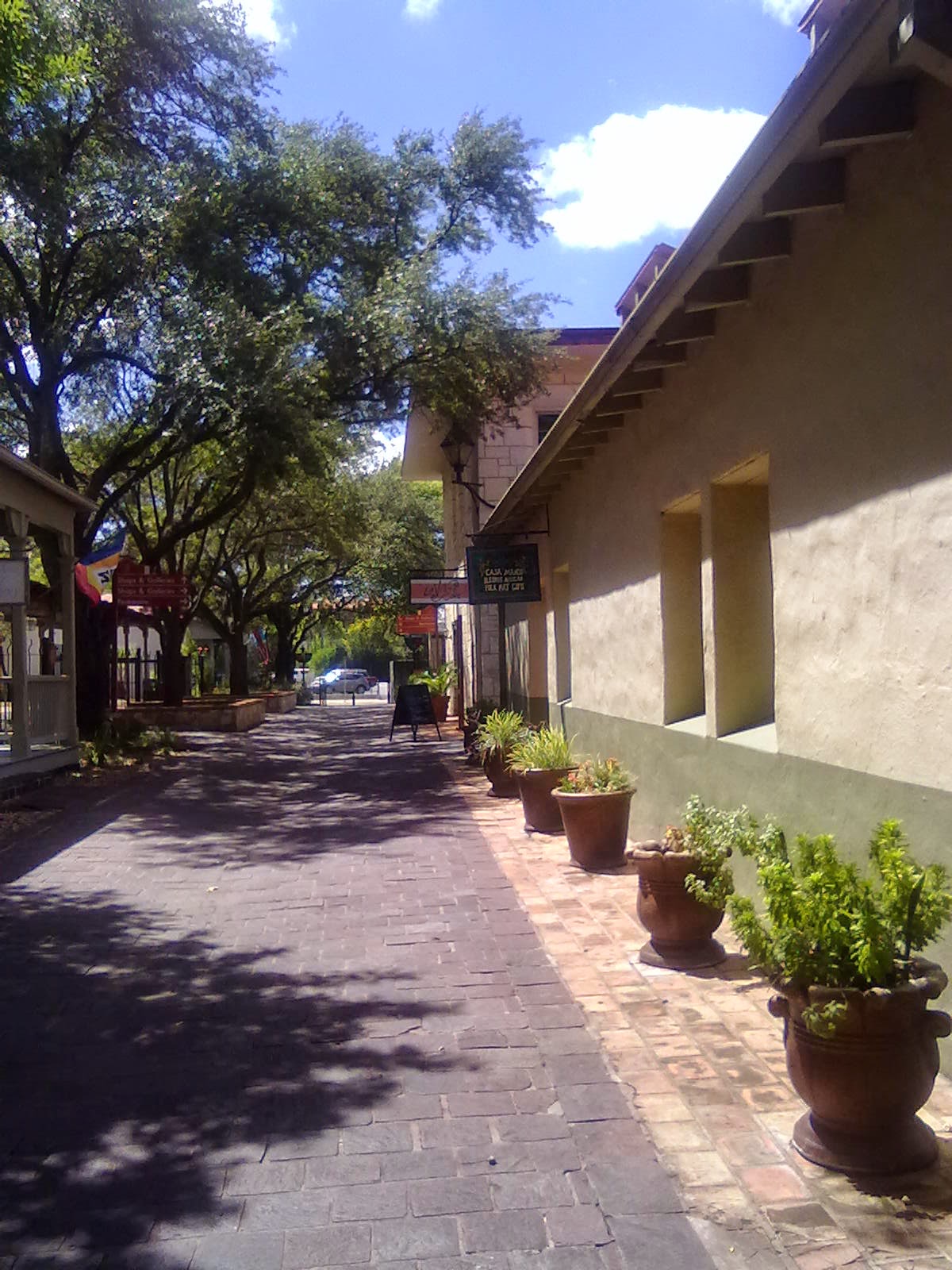 ...and visit the cats taking siesta at the Mexican handcraft store which I am disappointed to find is closed for lunch. 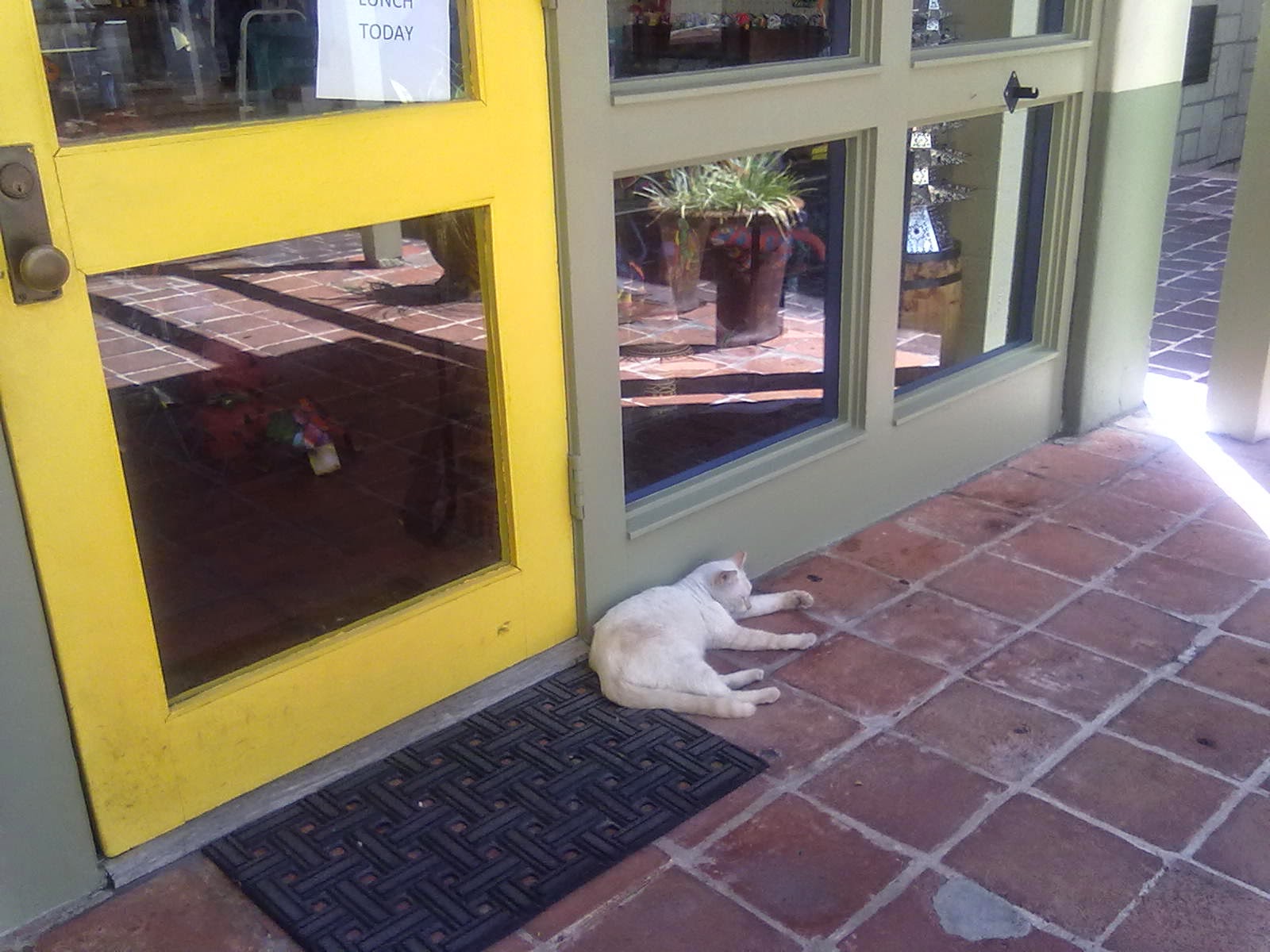 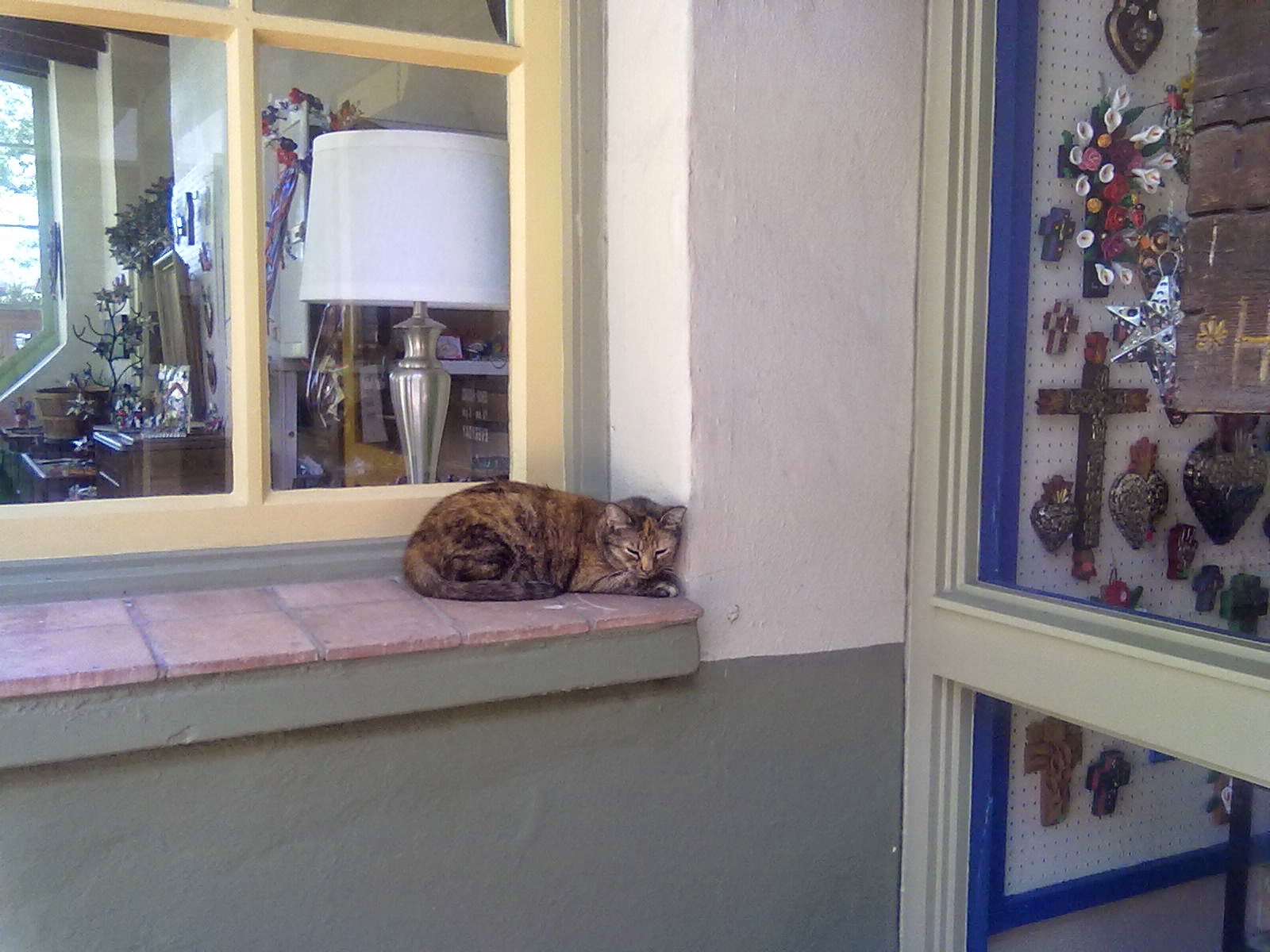 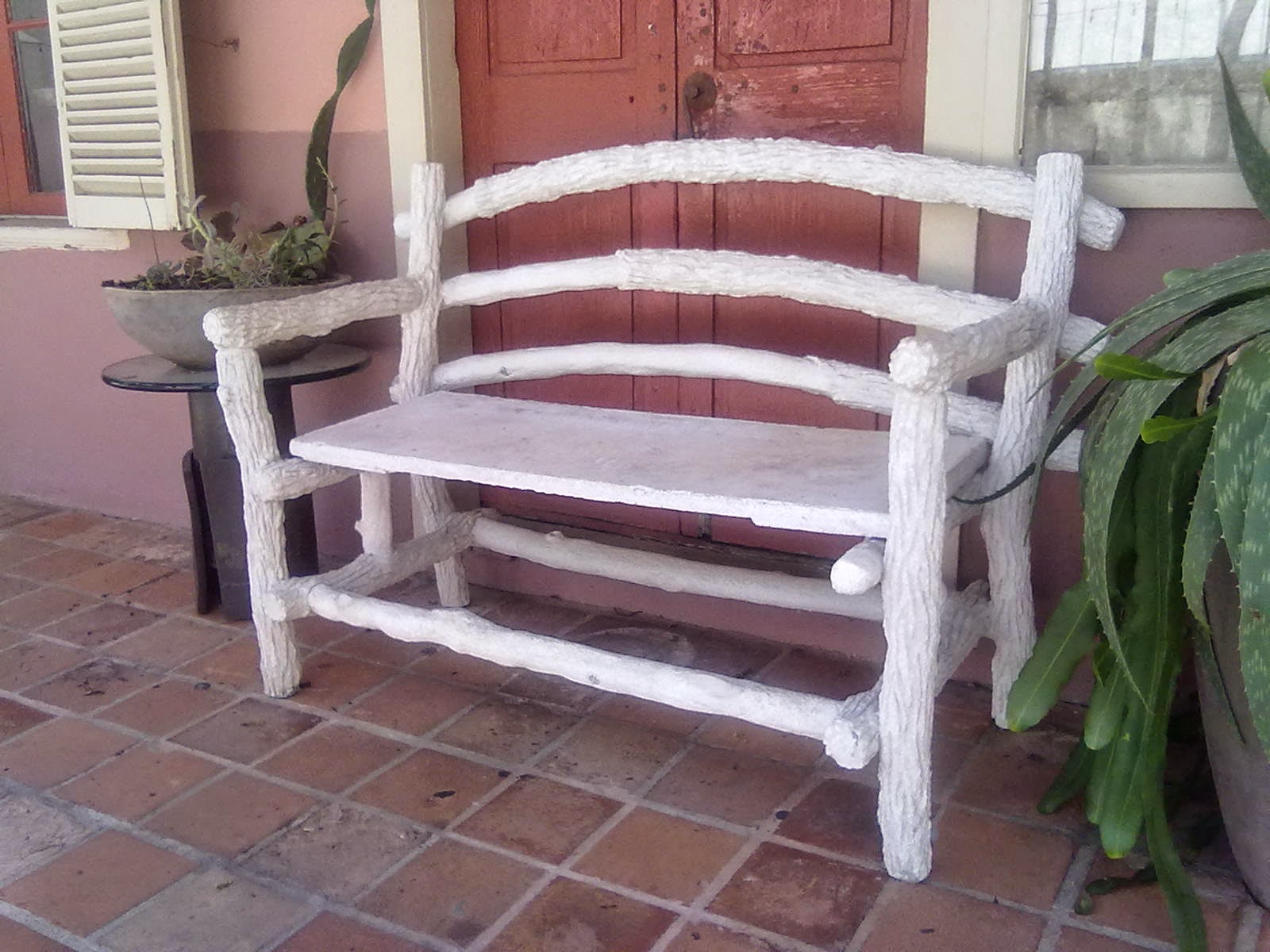 I found Angelita's purple door irresistible plus she has some beautiful things inside.  She's a lovely lady so the next time you are downtown stop in and take a look. 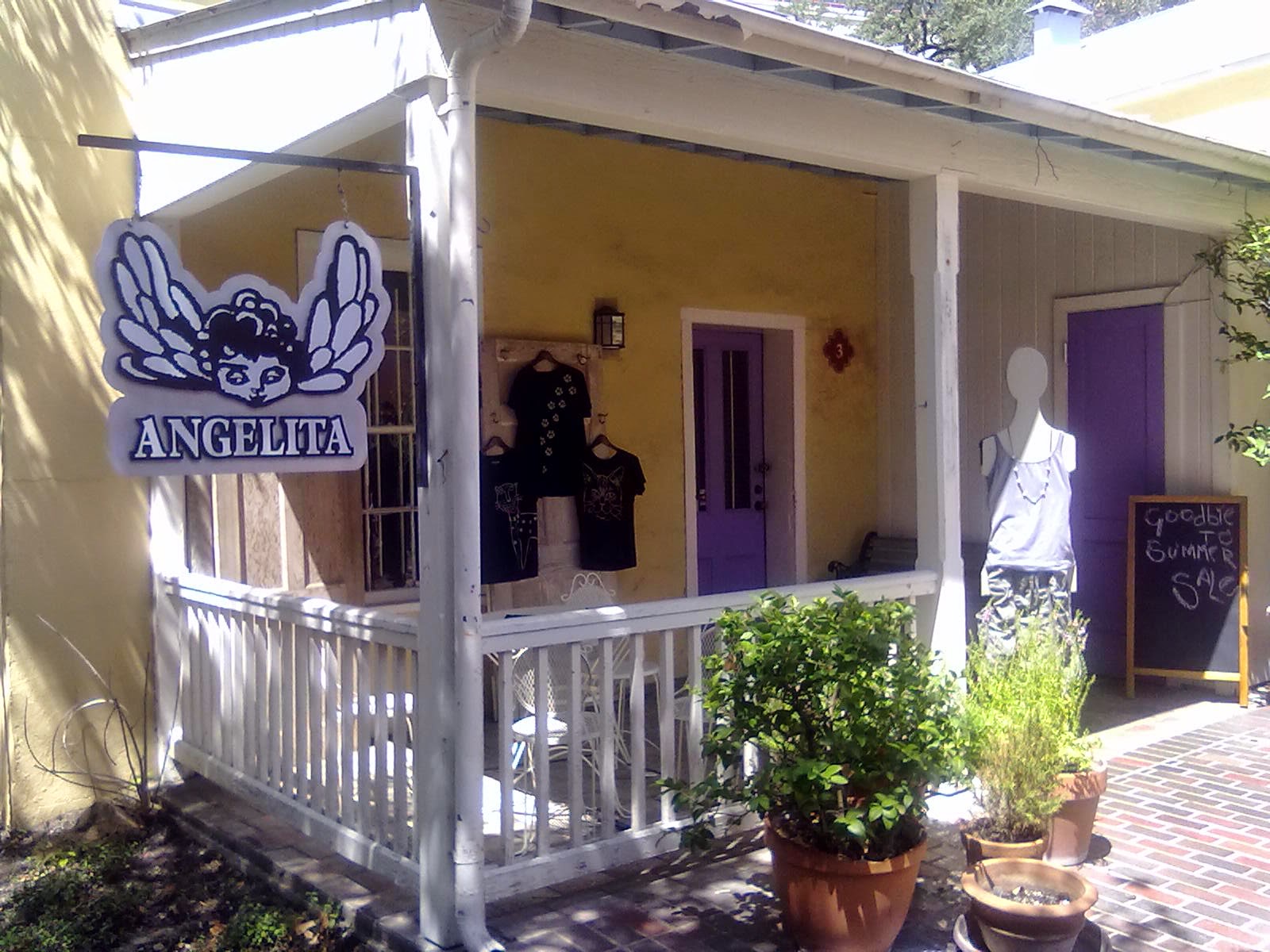 Back to the courthouse before time is up I paused to see this Acequia or water canal preserved in front of the new courthouse. 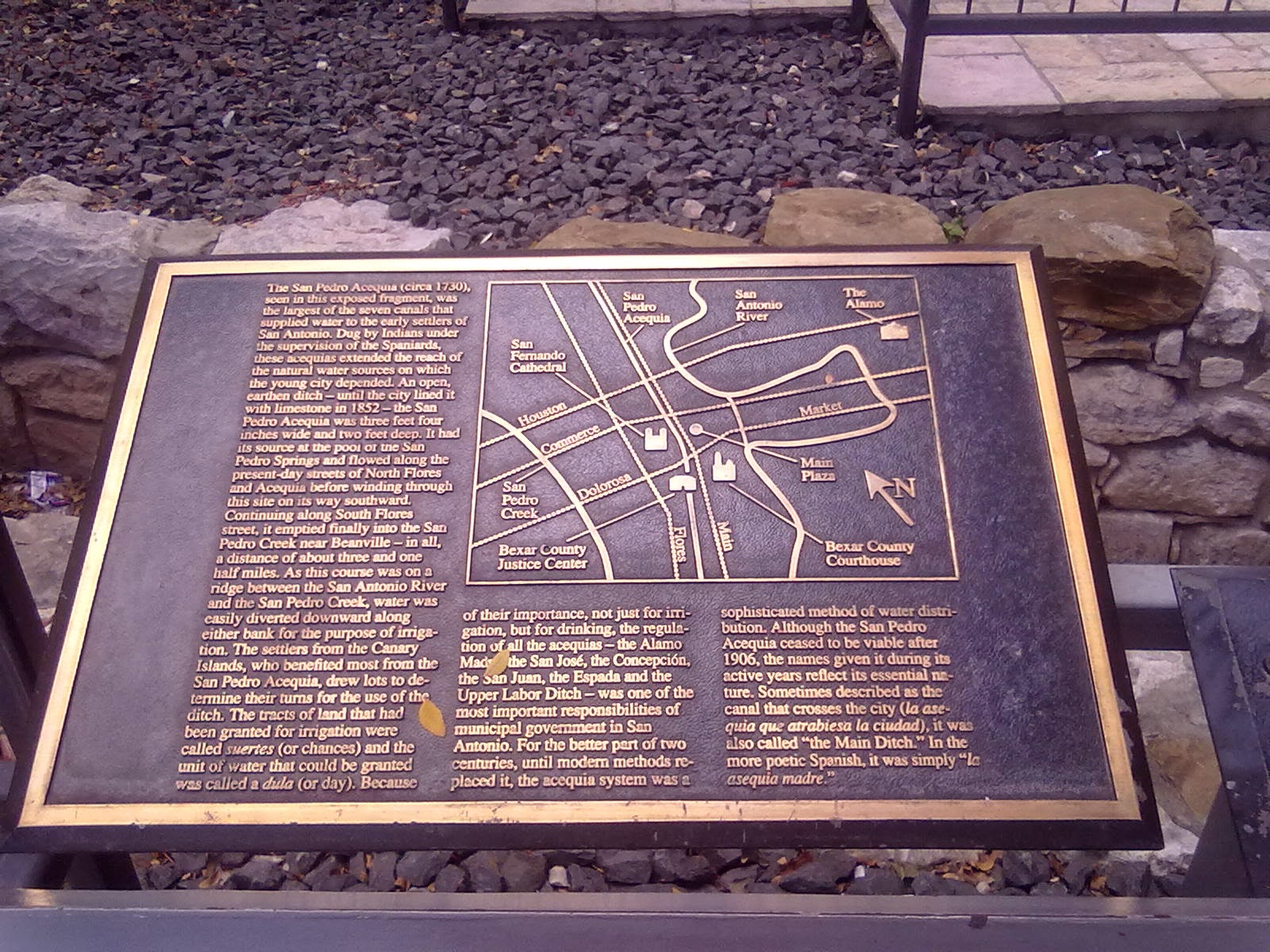 One of the courtyards inside where we relaxed during breaks. 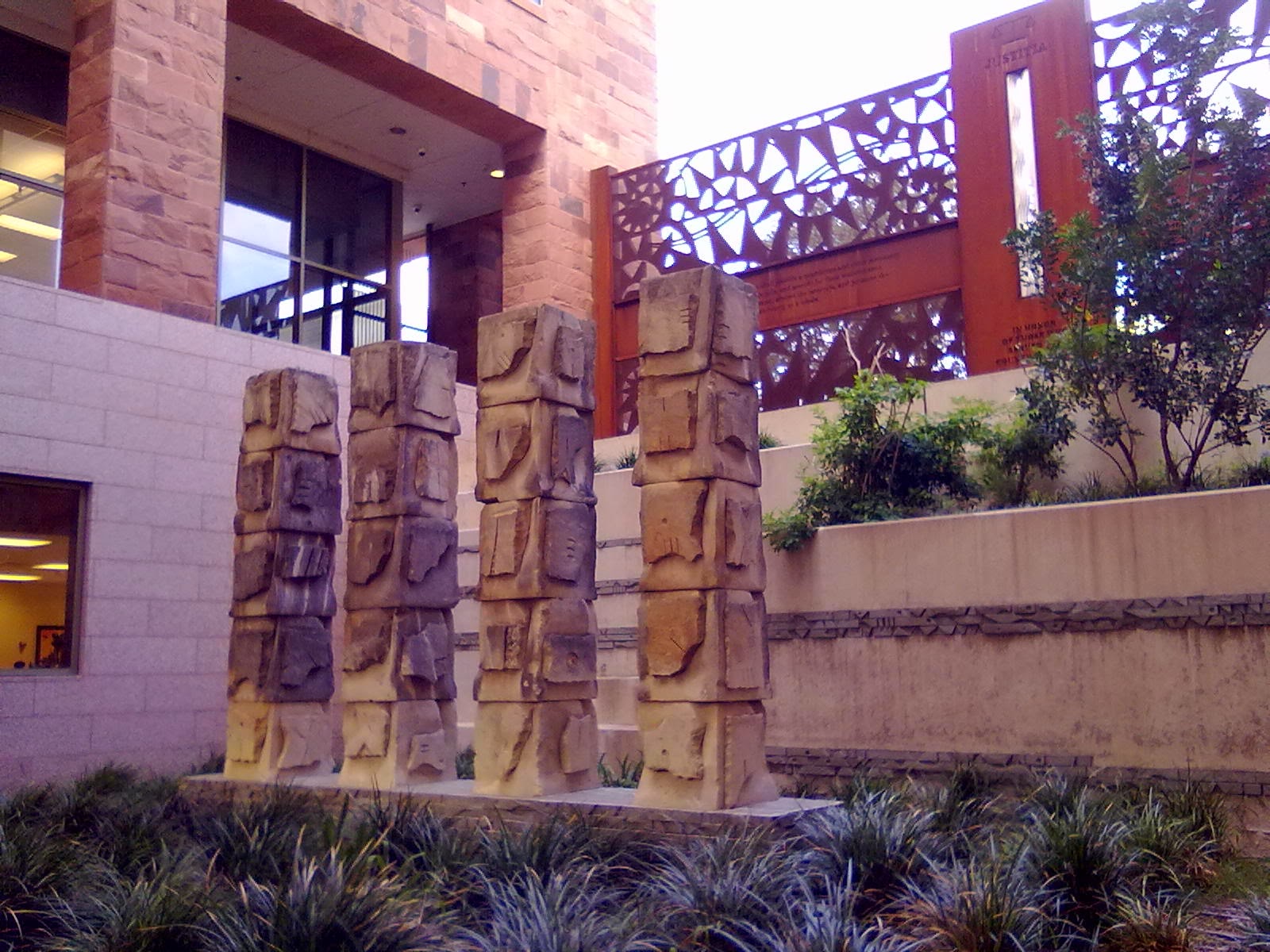 I love how we blend old and new in our city.

Didn't get called to serve on a jury.  Home by 3:30 and good for another three years.
Posted by Shirley Fox at 8:40 AM