Each month I join Pam at Digging for Foliage Follow-up on the day after Garden Blogger's Bloom Day which is the 15th and that should make this the 16th.  I'm a day late this time and it's a good thing Pam is always flexible.  November's choice is Cycas Revoluta or King Sago Palm.

When I post photos of the front yard, readers will occasionally ask questions about the large cycad near the mailbox.  It's apparently hard to miss for those who love these plants.  A few days ago Loree of Danger Garden asked why I never mention the cycad and, while I replied in the comments section, it's time to feature it for Foliage Follow-up and try to answer questions a little more in depth. 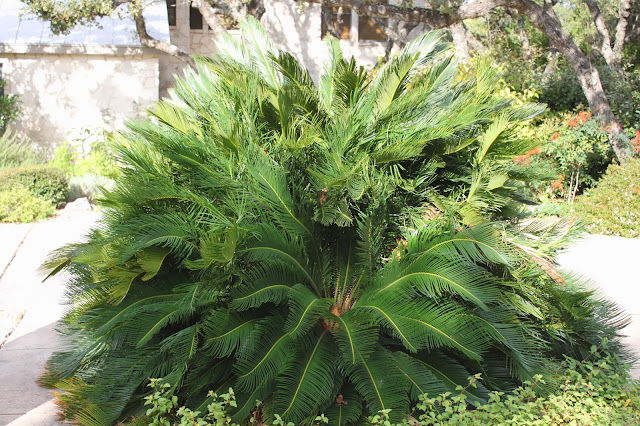 Despite the common name, Cycads are not true palms.  While there are native cycads in Mexico, the Sago palm is native to Japan.  The revoluta means "curled back" which apparently refers to the curved leaves.  Right now the tips in the upper part of the plant appear to be having a "bad hair day" since they are somewhat unruly perhaps due to our crazy weather with both unseasonably warm and cold in the same week.  They could be crowded in there too.  The lower part is pretty while the upper leaves are going every which way. 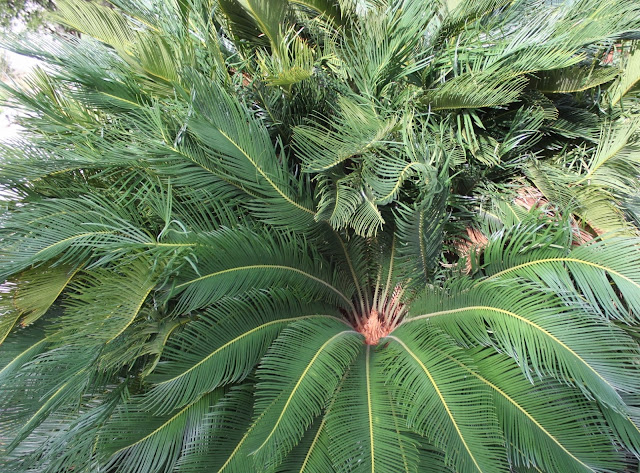 There were two cycads near the mailbox in 1995 when we bought the house.  Along the way one of them froze but this one has managed to survive nearly 20 years of searing heat waves, drought, torrential rain, and the occasional deep freeze which are all part of weather in South Texas.  You can see browned leaf tips around the base.  In the winter the cold concrete burns the leaves and in the summer they are burned by radiating heat. 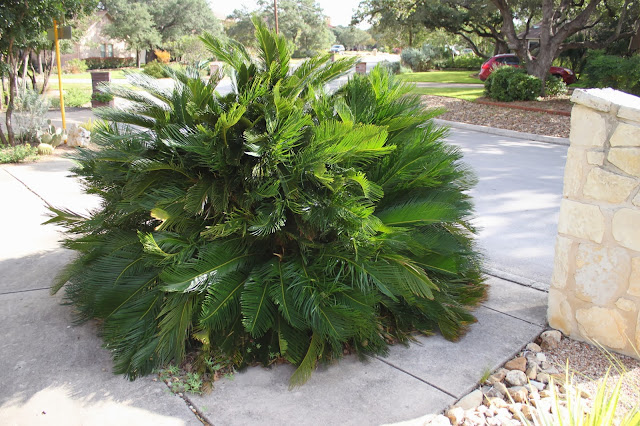 At nearly 10' diameter (just over 3 meters) it is growing over the walk by the mailbox and those fronds have sharp points.  We plan to keep it and hope it doesn't get much bigger.  Much of the girth is from the seven pups growing out of the base as you can see here.  We never tried to remove any pups since there's no way to avoid multiple stab wounds so we simply cut out dead fronds after winter freezes.  Since we haven't had a big freeze in two years it's been a while since we've dealt with it.  At 6' (just under 2 meters) tall, this guy is hard to miss. 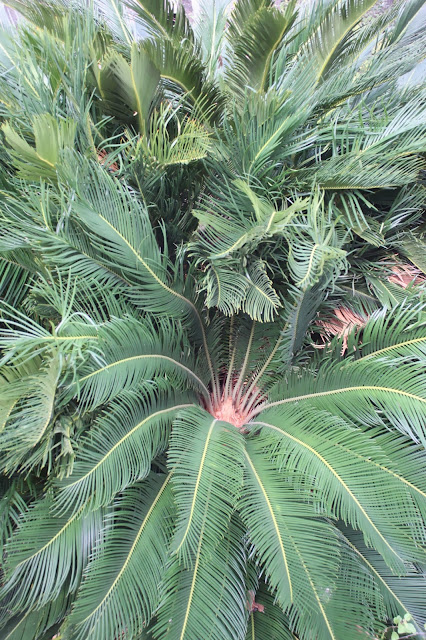 It is a male plant with two stamens over a foot long.  Female seed pods are round. 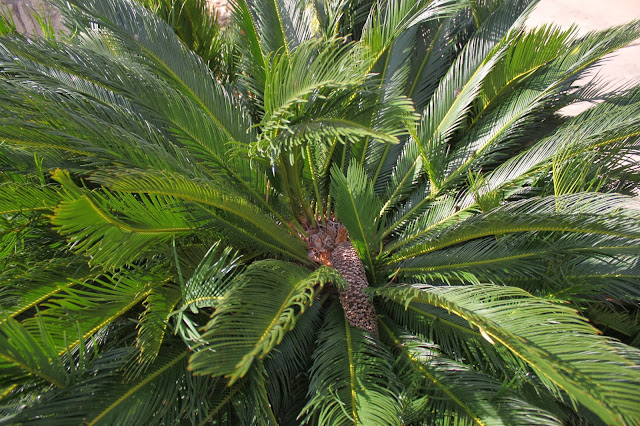 How do we protect it when it does get cold?  In February 2011 we covered it with a tarp to protect it from a prolonged 3-day freeze followed by snow.  The idea is to keep the cold from settling into the core.  Many of the cycads in the neighborhood lost their leaves that year but most regrew from the base over the next several months. 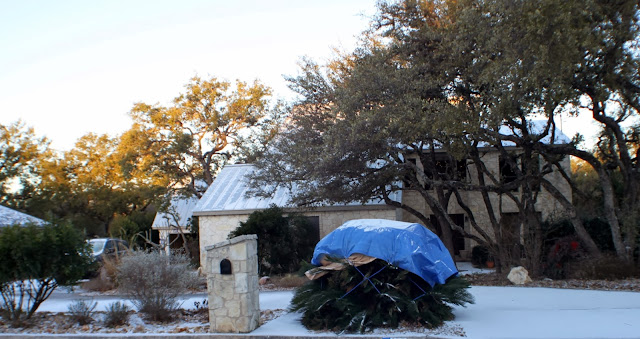 Why don't I mention it more?  They are fairly common in my neighborhood.  Just within a few blocks in either direction there are probably 50 or more planted in front yards I can see on my daily walks.

There are some good points.  It makes a good background for this pennisetum which is about where the second Sago used to be.  Can you imagine if both were the same size now? 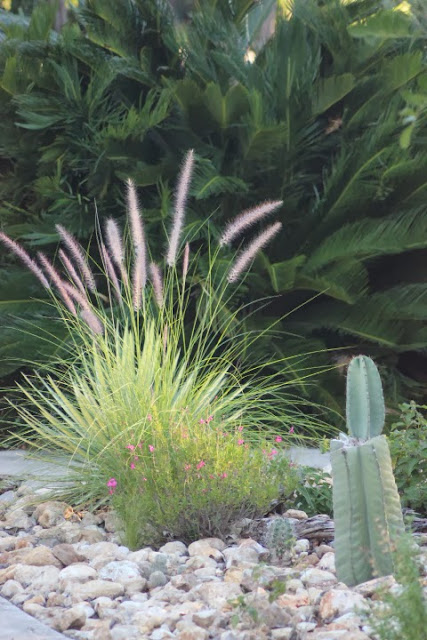 It also fills the need for some type of structure at the entrance to the driveway.  You'll notice the horseherb is looking a bit shaggy at the base.  That goes back to the stabby nature of the leaves so I typically leave the groundcover to die back in the winter. 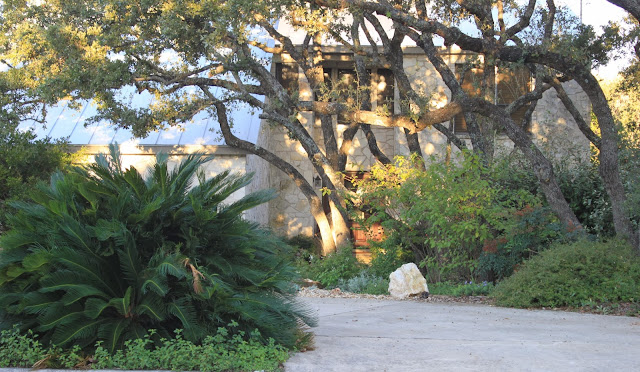 Some people prune the lower portion of the plant to make it look more like a palm that has lost its lower fronds.  Those I've seen given this treatment often produce new pups from the base.  Only if it gets wider would I consider doing that to this one to limit further encroachment over the driveway.  This points out the need to give these plants at least 5 feet of space on each side.

It's also absolutely deer proof.  I have never seen one antlered, and deer certainly will not eat it.  Since that's a top requirement in plant selection for the yard, this cycad is perfect for this conspicuous spot in my garden.

For more Foliage Follow-up posts, be sure to check out the comments sections at Digging.
Posted by Shirley Fox at 1:40 PM