When I uploaded the series of hummingbird photos to Picasaweb they were automatically compiled into a fast-moving slideshow by a program called Awesome Motion.  The awesome part of this is that the resulting slideshow is contained within a single photo link so it is viewable on mobile devices.

The same thing happened with the owl photo I recently posted and I received comments from readers and friends so I spent some time checking out the Awesome Motion program.  There's little to no information about it out there so I'm adding this tutorial to my blog for reference.  I used Picasaweb because that's where I upload photos for my blog.  There might be other apps for this but I didn't find them.

You need at least five photos in a series and, this is very important, the background must stay in the same place in each photo.

Before uploading to Picasaweb I always downsize each photo to a maximum of 2048 pixels. This keeps them within the free storage limit set by Blogger and allows me to add an infinite number of photos to my blog without paying for additional storage.  Downsizing the photos makes uploading faster and does not change the quality or the size at which they display.  08/07/-Correction:  As of July 2013, Picasaweb now allows up to 15 GB in each album and the current information states that photos are now automatically resized to 2048 during the upload process so it is much easier to continue blogger for free!

Here are the nine photos of the hummingbird I uploaded all at once.  Note that the flower stem stays in the same section of the frame throughout.  Of course I'm on the wrong side of the light in this one but chasing hummers is like that. 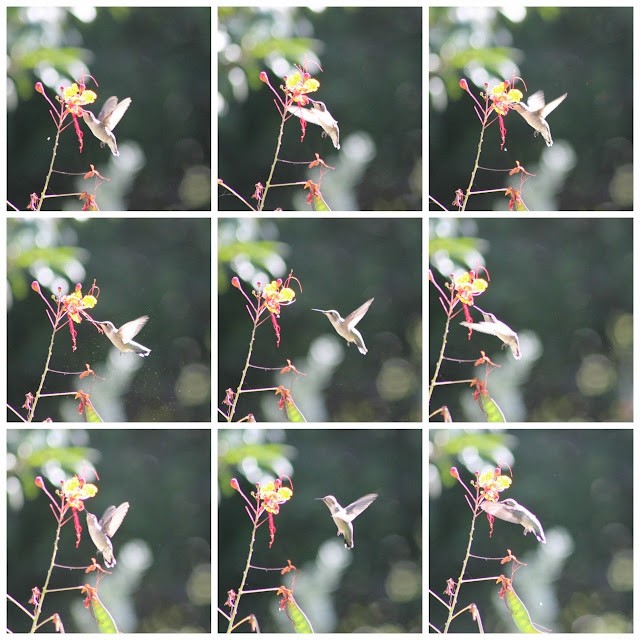 I uploaded the nine photos to Picasaweb at the same time.  Now for the really hard part.

That's it, the program kicks in automatically and you can't do anything to make Awesome Motion work. There's no edit function or menu feature so the program finds your series and either compiles the slideshow or finds it lacking something and does nothing with it.  So there is no way to make it work, you just need the right elements which include a steady background and at least five photos.  Then it works automatically.  To see the animation you may need to close out of the album for a few seconds.

The collage below shows another hummingbird photo series I tried unsuccessfully to put into motion.  These are better photos but did not work with Awesome Motion despite several attempts.  That is because the background features change up, down, and sideways too much for the program to work. 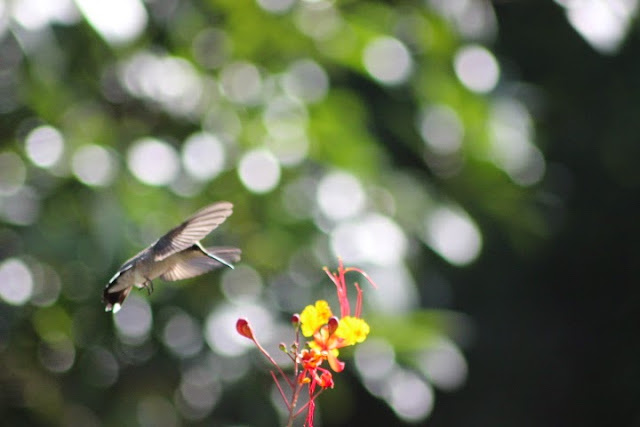 In other news, we've been having record high heat daily and it's been dry so the garden is in various stages of summer dormancy.  So it's fun to have interesting ways to occupy my own garden downtime as well.
Posted by Shirley Fox at 9:24 AM