This is the second post in my series about the White Rock East Garden Tour in Dallas where nine gardens were featured in three neighborhoods near the Dallas Arboretum.  The gardens on tour ranged from new homes with very standard landscaping to older homes with lots of character and personal backyard retreats.  I'm featuring my favorites in individual posts and will combine highlights from the rest.  My first post in the series was the colorful and relaxing Collins/Spalding garden.

The Wright Garden in the Little Forest Hills neighborhood featured a modern home with a no-lawn front yard which included a stock tank vegetable garden. 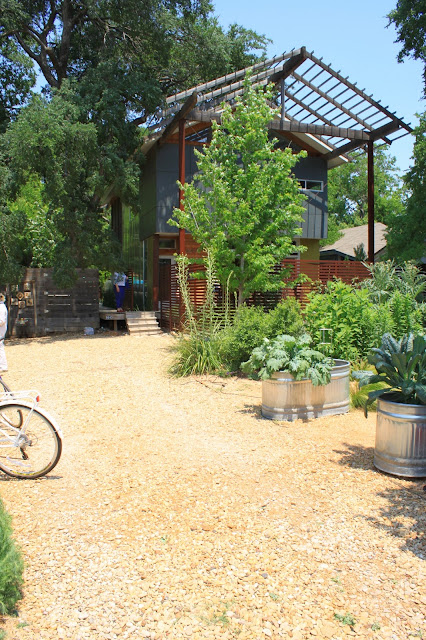 The front yard is decomposed granite. 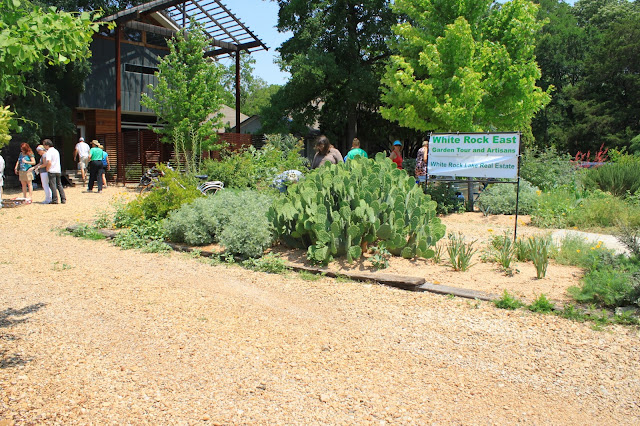 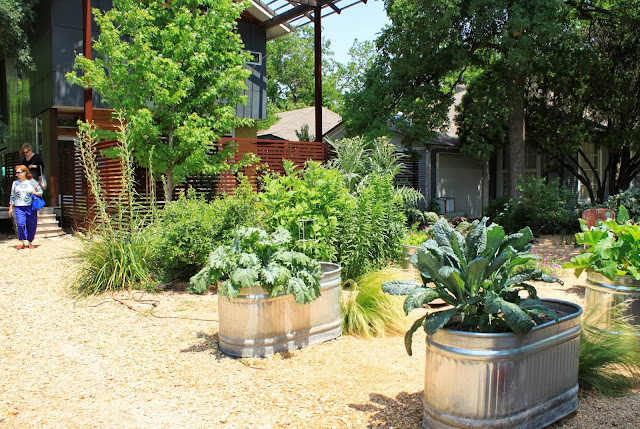 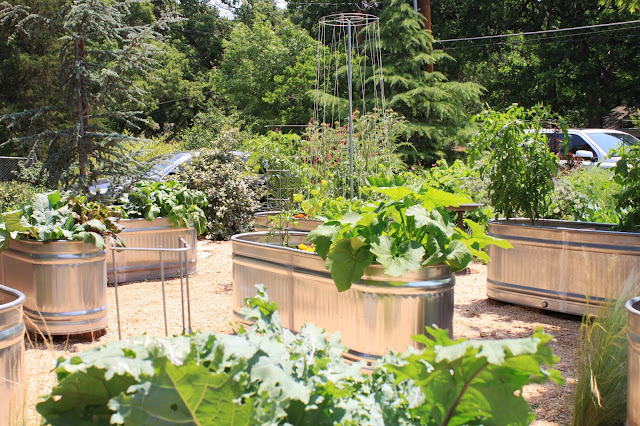 Agaves in the gravel.  I was surprised by the number of agaves I saw on tour in Dallas. 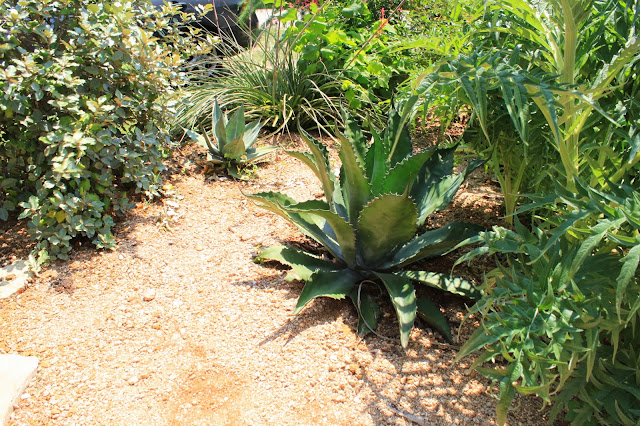 The house is set well back from the street leaving plenty of room for the edible front garden. 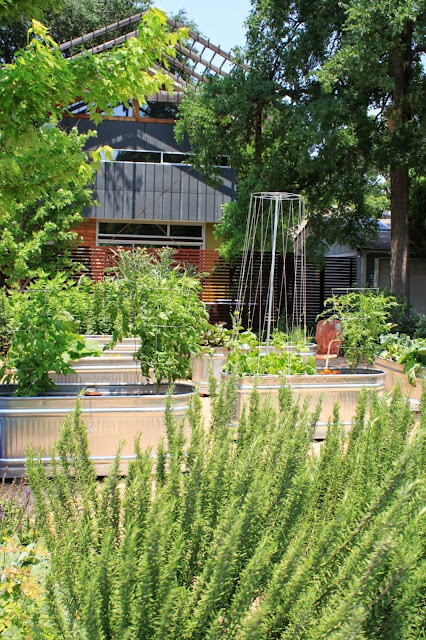 Nearer the house a steel fence enclosed a front courtyard. 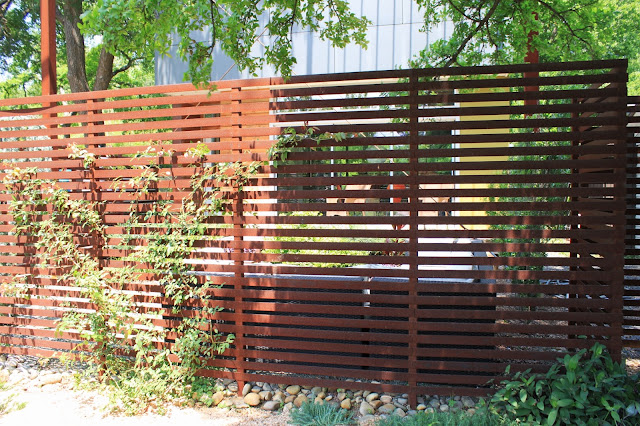 Rose climbing on the fence. 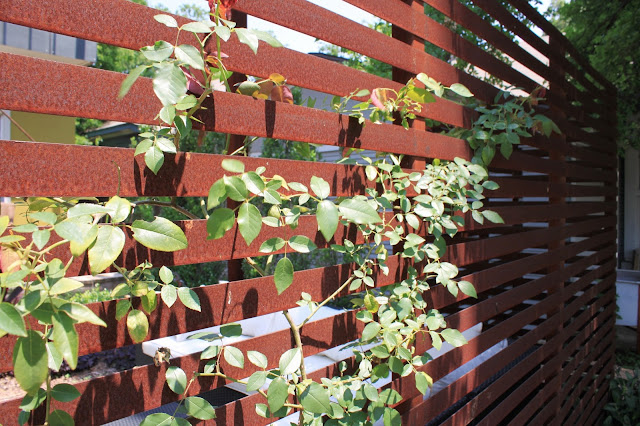 Groundcover in the shade. 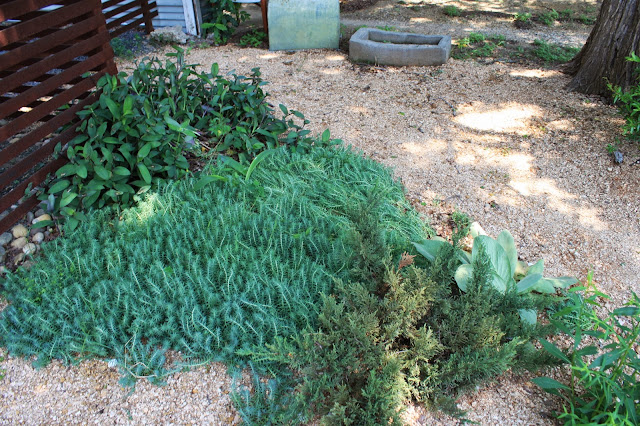 Gravel courtyard with seating.  That's the neighbor's garage so this lot is quite narrow. 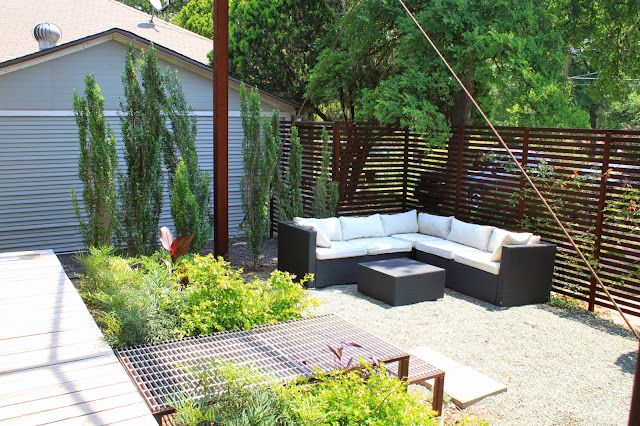 Weeping atlas cedar for sculptural interest.  These grow well in Dallas, but not where I live in south Texas. 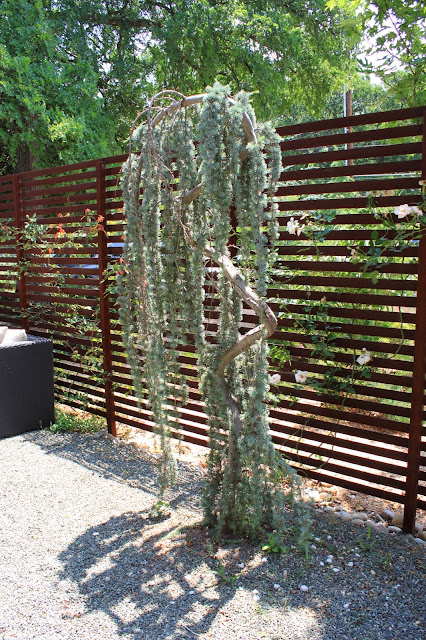 Shoe scrapers are a very good idea when you have gravel and decomposed granite in the yard. 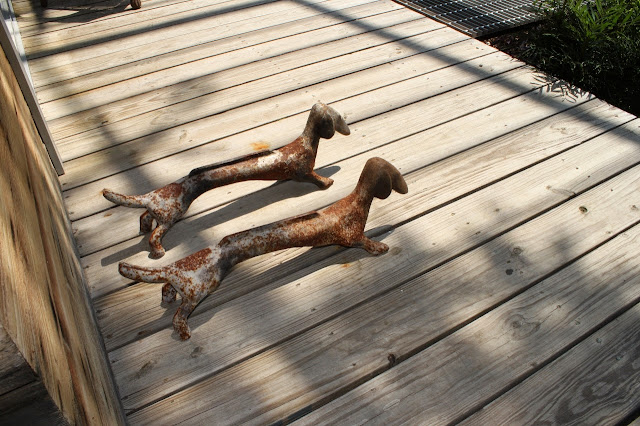 This photo tricks the brain a bit and requires a little visualization, it's a cut piece of limestone fitted on the corner of the house.  I surmise this stone keeps people from kicking the wall? 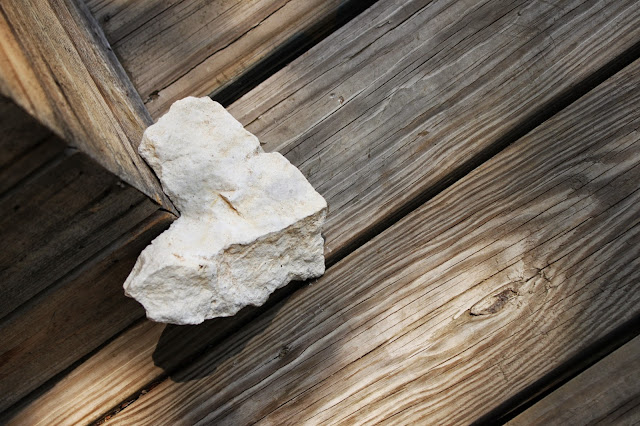 A wood deck walkway leads to the back yard.  This view looks toward the front. 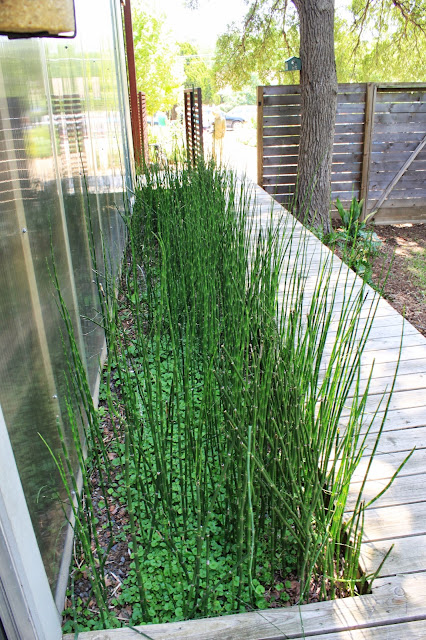 A deck with seating matches the front 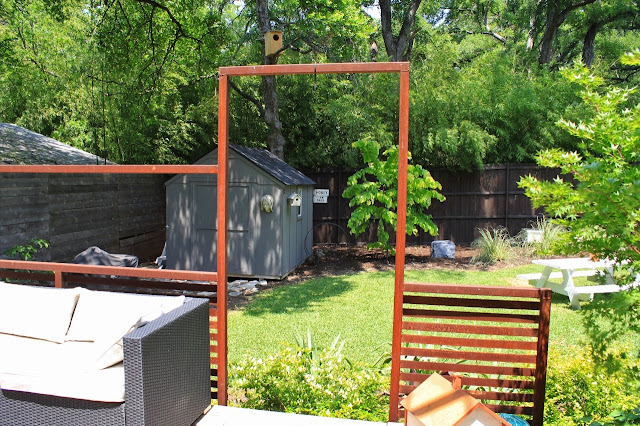 View of the seating deck from the yard. 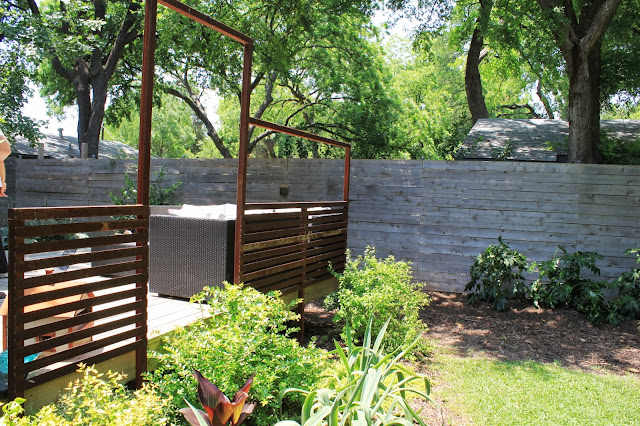 These metal grate stairs looked good with the house and garden but they moved around when I stepped on them making them feel unstable. 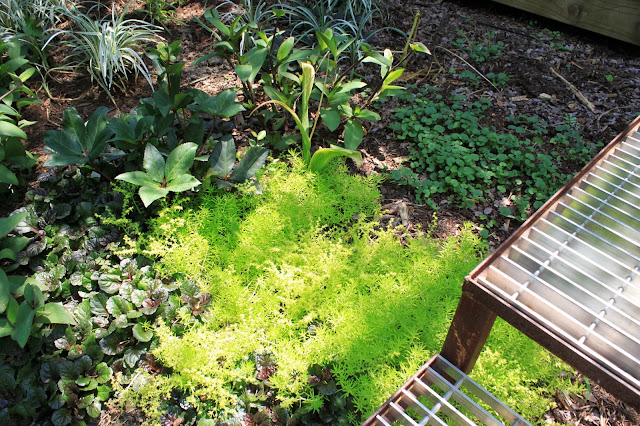 In the back along the fence are beehives. 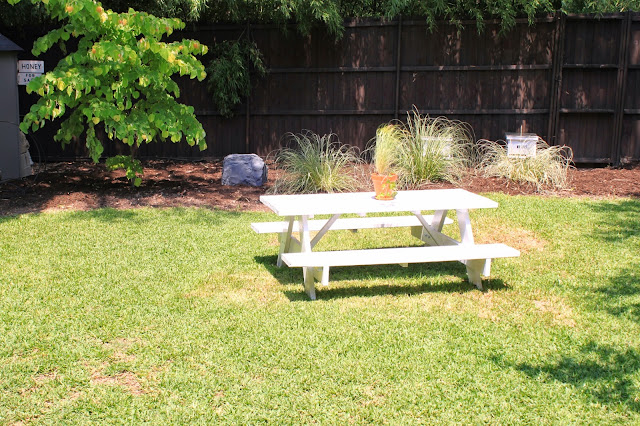 There's a bit of glare, but I wanted to show the back of the house with its screened porch on the top floor. 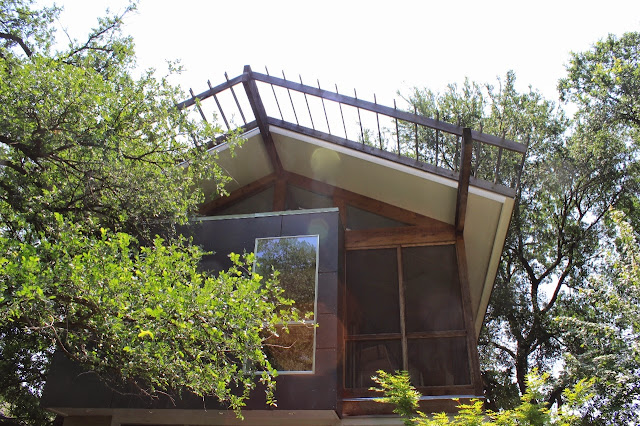 A look at the xeric border bed leading back to the street along the driveway. 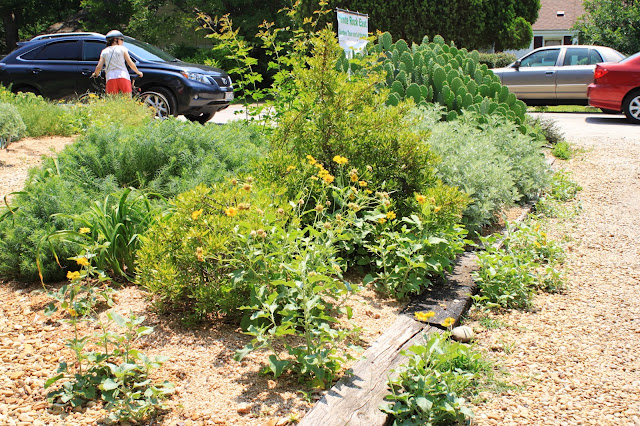 Now for something a bit different.  I noticed many visitors were avoiding the crowded street by leaving through the neighbor's garden so I followed their lead and took photos of this pretty Texas-style cottage garden next door. 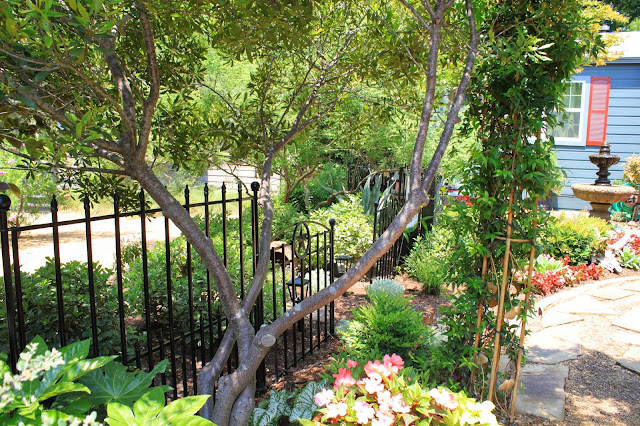 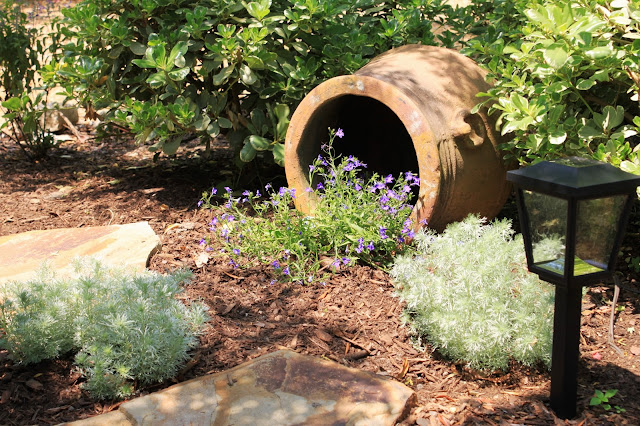 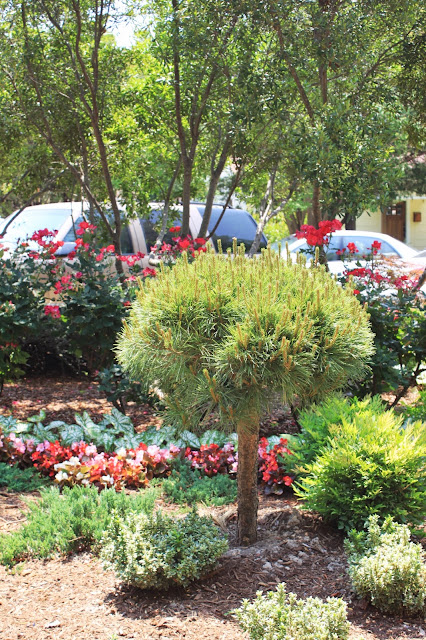 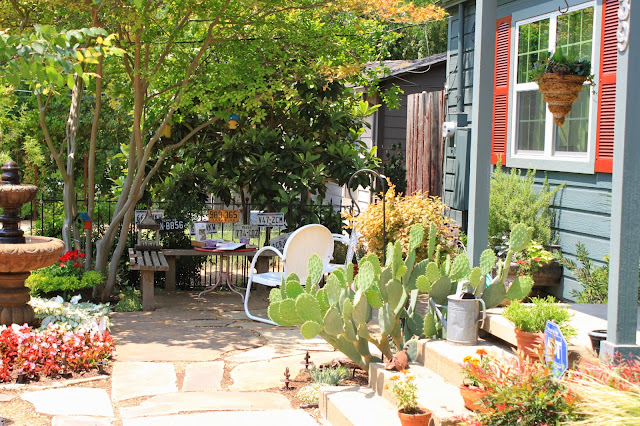 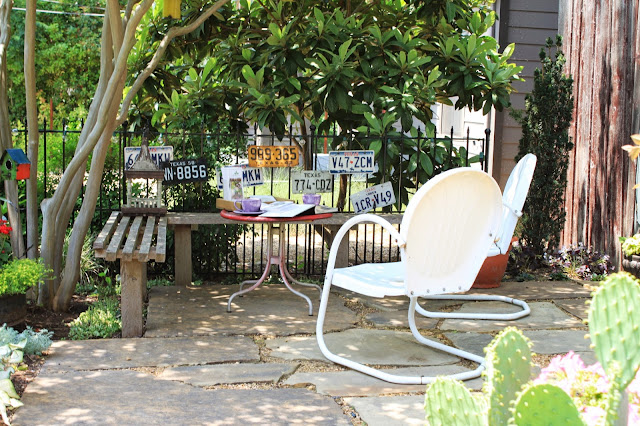 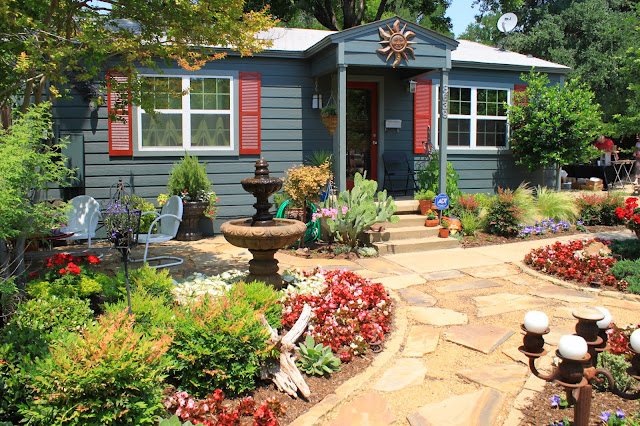 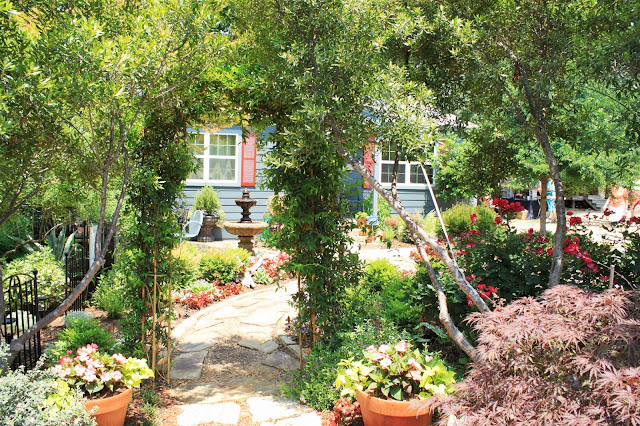 On to the next-next door cottage which was also  a lawnless gravel front yard with agaves, desert willows, and Mexican feather grass. 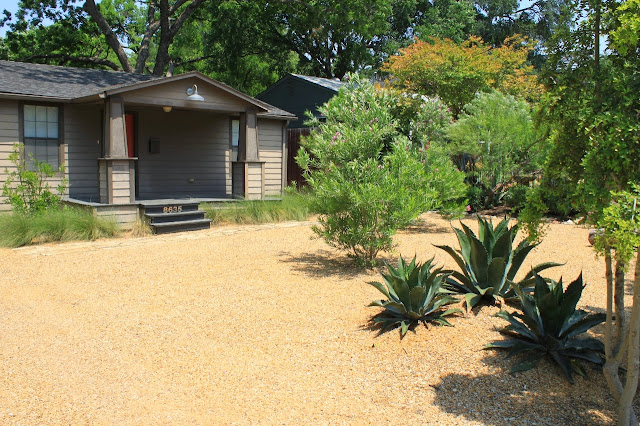 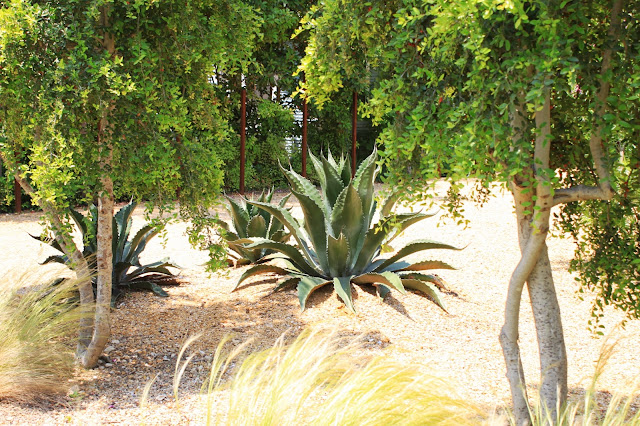 In my next post we'll tour a large garden designed for family fun around a beautiful old Craftsman home.
Posted by Shirley Fox at 6:49 PM