This is the fourth in a series of posts covering the San Antonio River Walk which is one of our country's top tourist destinations and the #1 destination in Texas. Most visitors spend their time along the small section downtown known as the Paseo del Rio.  There's much more to the River Walk and I've set out to show you the entire 15 miles that most tourists miss and local residents enjoy.  My posts are covering the San Antonio River beginning at the Pearl Brewery on the north end and heading south to the San Antonio Missions National Historical Park.

We'll begin today's walk at the Navarro Street Bridge and head south to Houston Street to the beginning of the popular Paseo del Rio loop through downtown.

The Navarro Street bridge is decorated with tile mosaics and is one of a series of pretty bridges crossing the river. 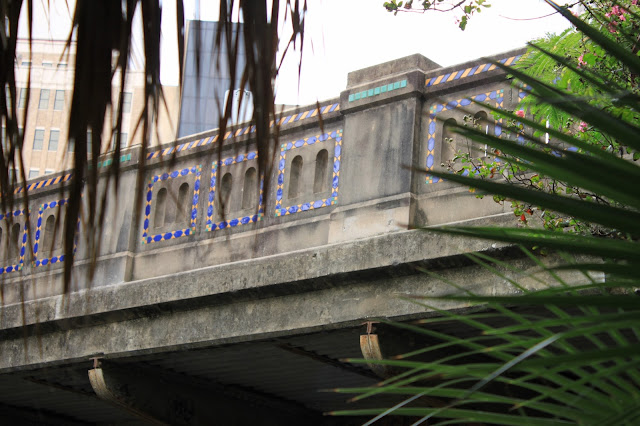 A stone arch marks the steps up to Navarro Street 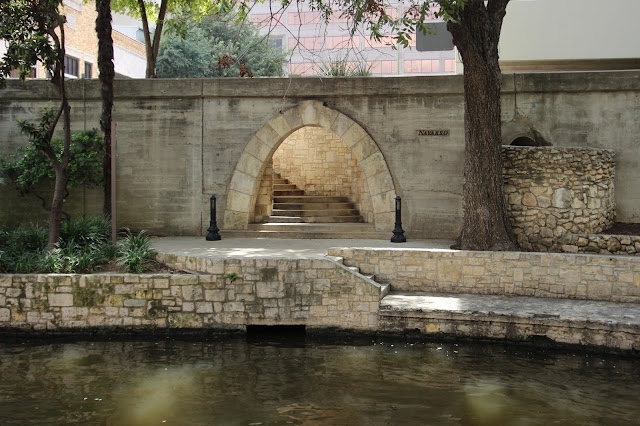 The nearby bench is another example of faux bois art along the River Walk. 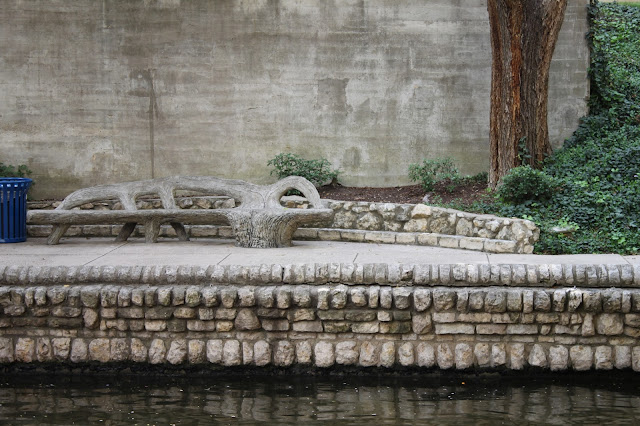 A creative mosaic bench is placed in front of the Southwest School of Art, and says in Latin "art is long, life is short".  The nearby Central Library is a good side trip too.  The entry plaza and outdoor spaces are undergoing renovation this year so I'll save those for a future post.


There are a number of mosaic installations on this section of the River Walk.  Here's a selection of favorites seen along the way. 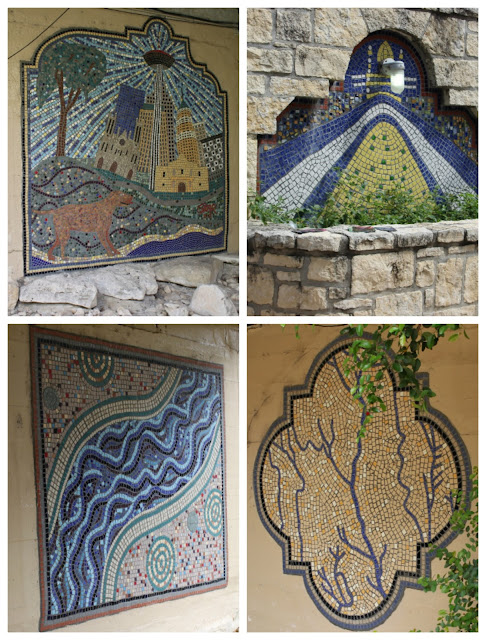 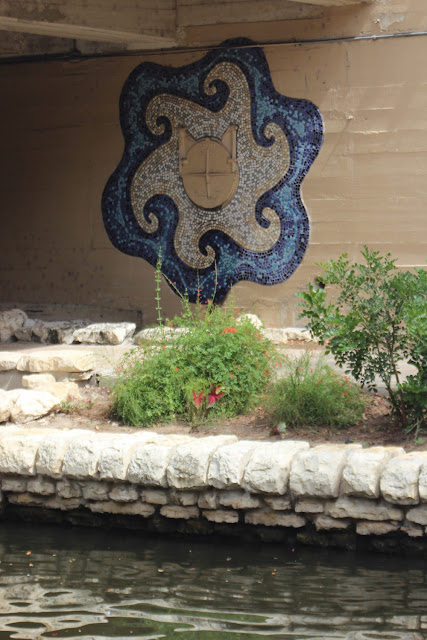 Rosemary blooms on a sunny wall.  I'd love to do this somewhere in my yard. 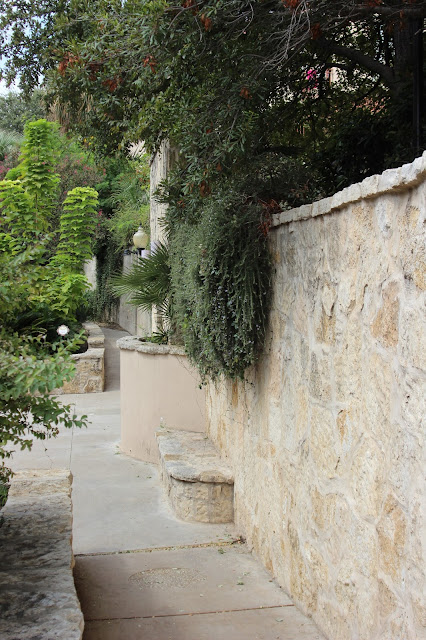 Augusta Street crosses on an old iron bridge, one of two still in use downtown.  I love the terracotta color with all the surrounding green. 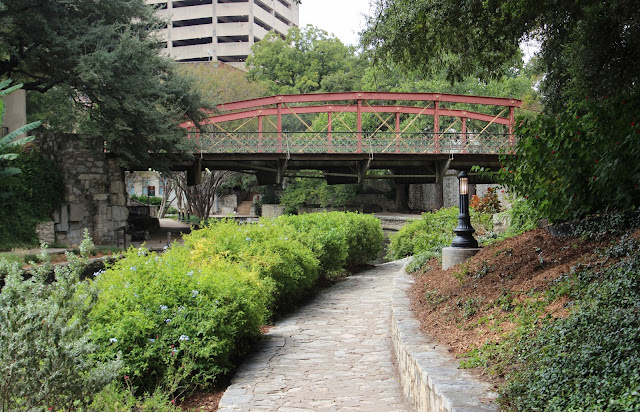 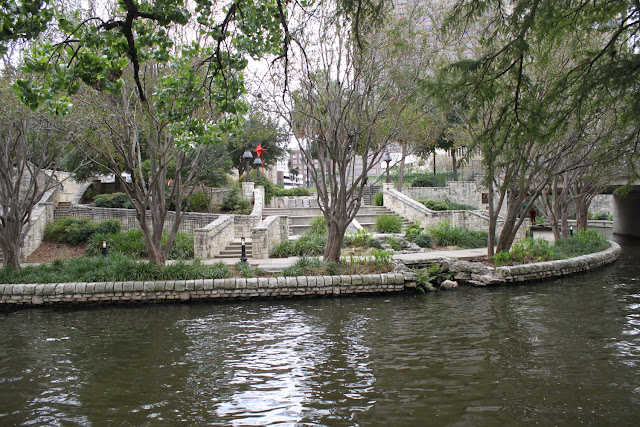 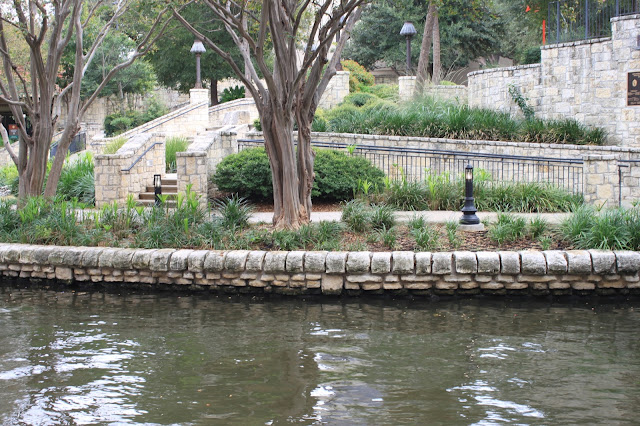 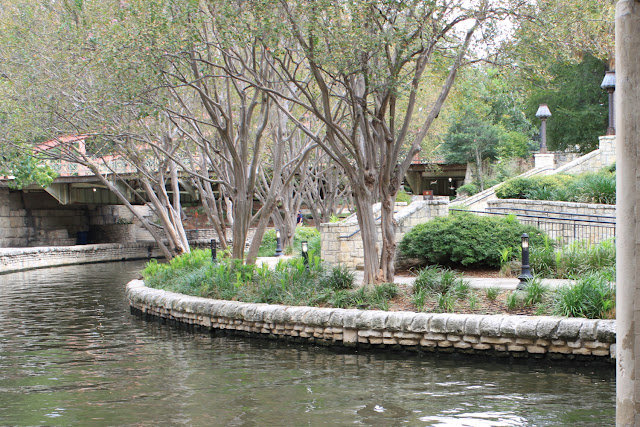 St. Mary's Street bridge fits right in with the beauty of this section of the river. 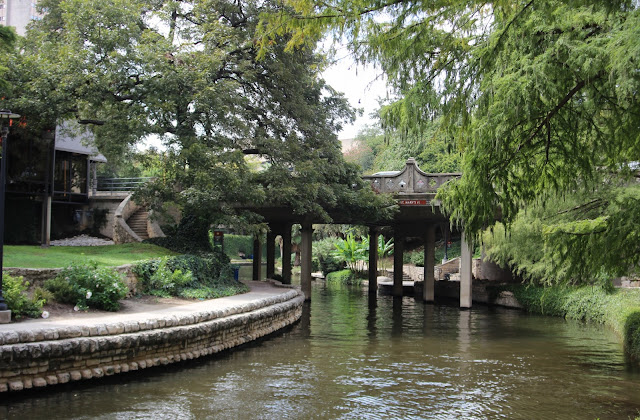 This map of the River Walk in mosaic tile is along the wall under the St. Mary's Street bridge.  It is a continuous work but I needed three photos to get it all in.  There's not much room to back up without falling in the river so most photos are close range.  On the right in the photo is the Museum Reach section where our tour began last year.  We are currently in the middle panel headed toward the the Alamo in the center.  Over to the left is the Mission Reach and the San Antonio Missions National Historical Park which is our eventual destination.

More views of trees and green along the river. 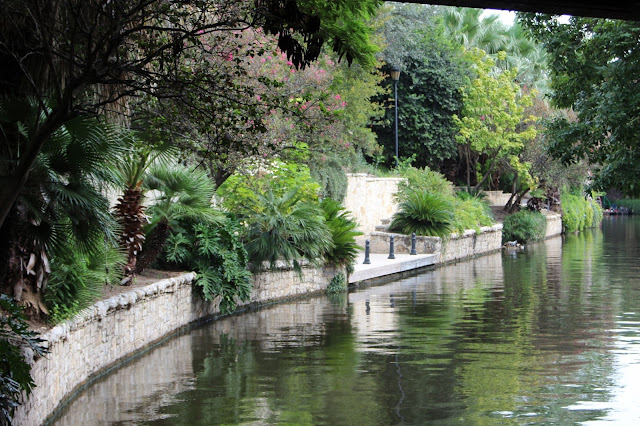 Tête-à-tête in faux bois right on the river and quite romantic. 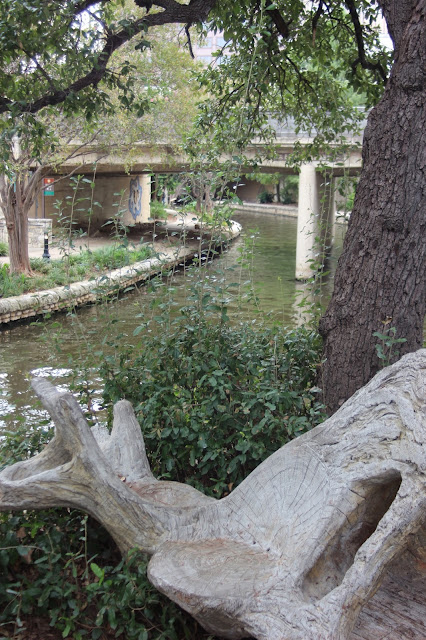 Ricki of Sprig to Twig commented on my last post that the River Walk gives our city a European look and I can certainly see why with scenes like these. 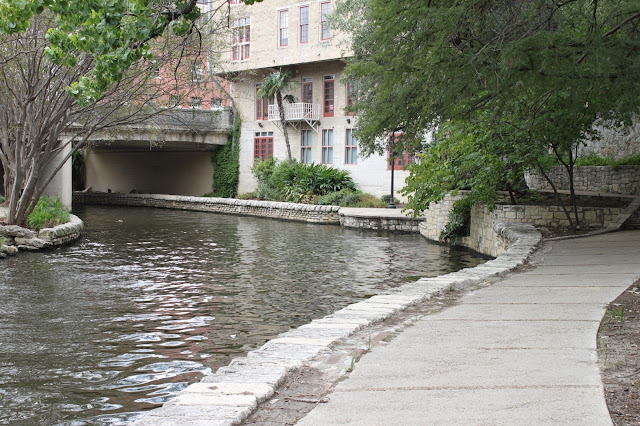 A tiny restaurant balcony on the river would be found in many European cities. 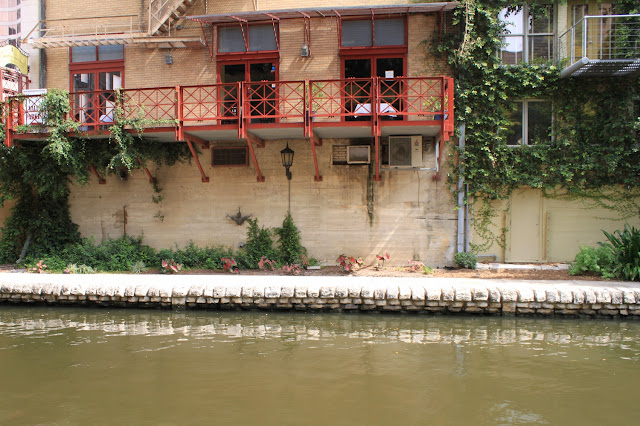 Downtown buildings are a mix of old and new such as this 1960s stair tower and tile inset on a city parking garage near the Pecan Street bridge. 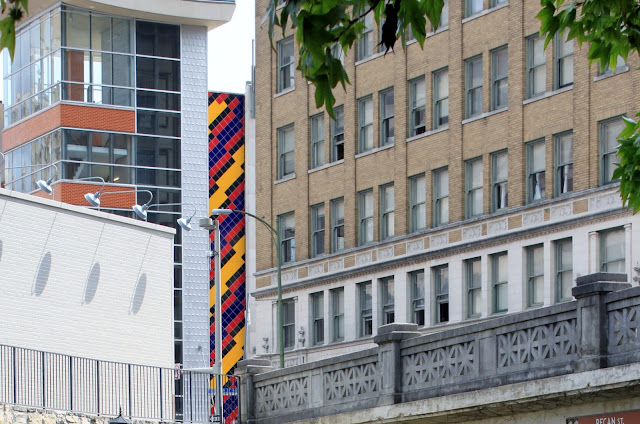 As we enter the busier section downtown we see huge waterfall fountains at the Embassy Suites Hotel. The fountain as viewed through three stone arches which are about ten feet high. 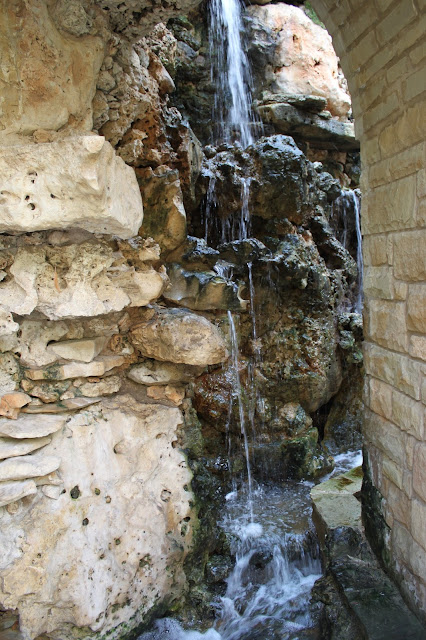 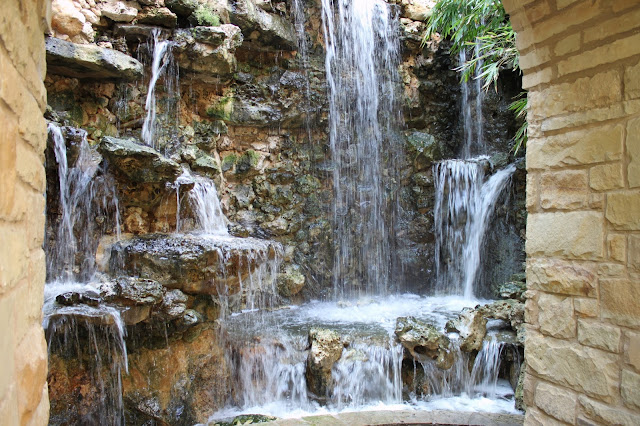 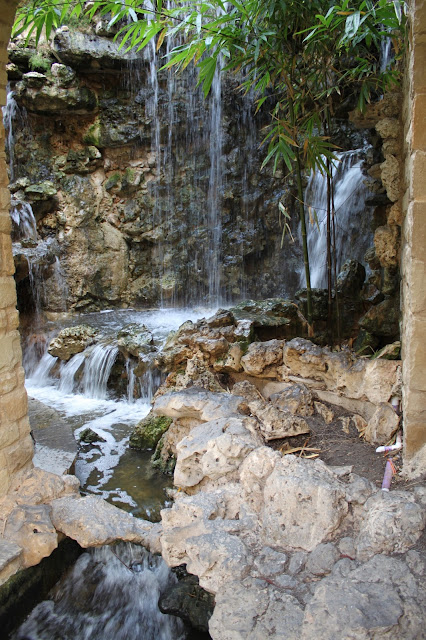 More mix of old and new, the facade on this building along Houston Street was preserved as an entrance to the new office building behind it. 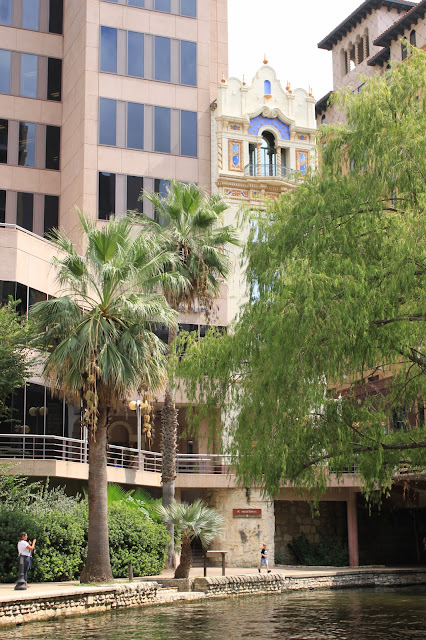 The mosaic columns  featured on the Houston Street bridge are a favorite of mine.  I'll save the detail on those for my next post because this is our turnaround for today.  At this point the River Walk can get confusing because the Paseo del Rio loops through downtown while the river bypass continues straight ahead where the loop will reconnect near Durango/Chavez Street. 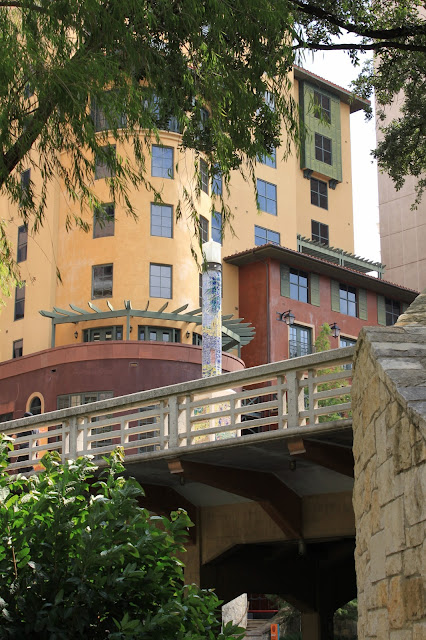 This blooming Brugmansia near the bridge was mesmerizing to the tourists. 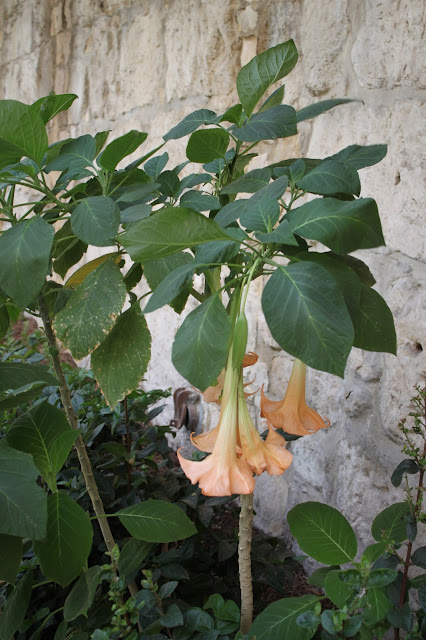 Now headed back north, we wave to the police officer keeping this area safe for walking.  There are also foot patrols and plenty of tour boats going by to keep an eye on things. 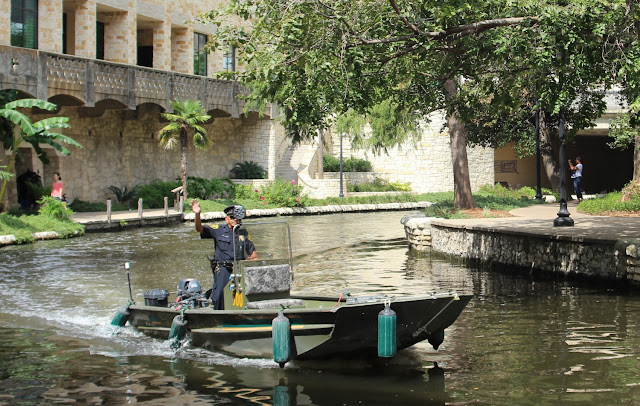 Star of Texas hibiscus bloom, we do love our stars here in Texas. 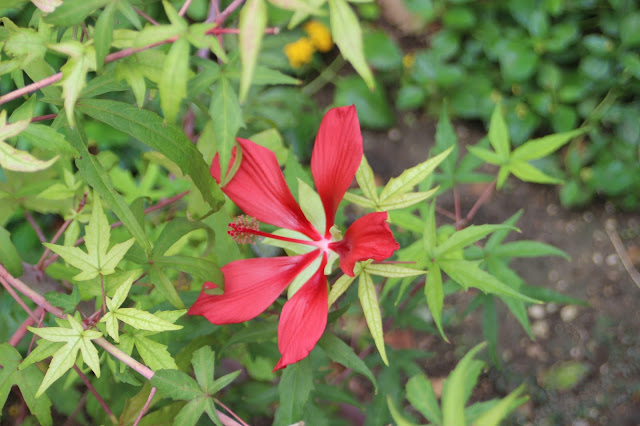 Another restaurant balcony, I liked the plants suspended from the wall. 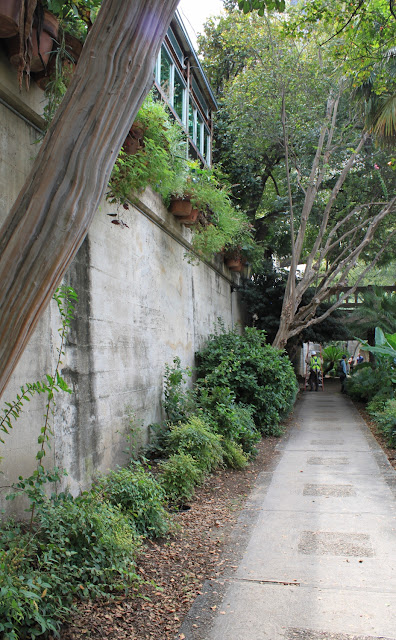 How do they get the boats in the water?  Here's one option. 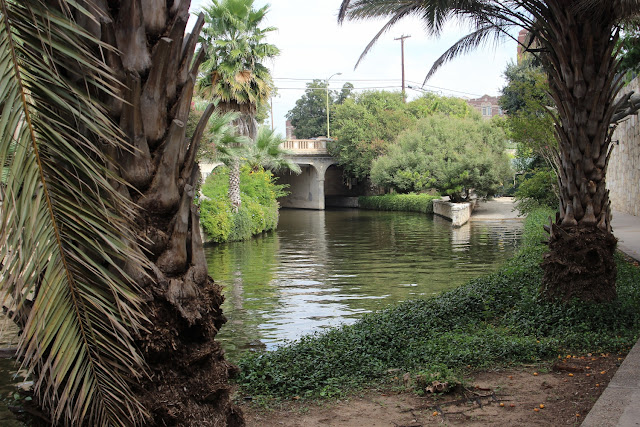 More of that tropical ambiance Hotels are a big part of our landscape.  The bollards on this landing mark a Rio Taxi or tour barge stop. 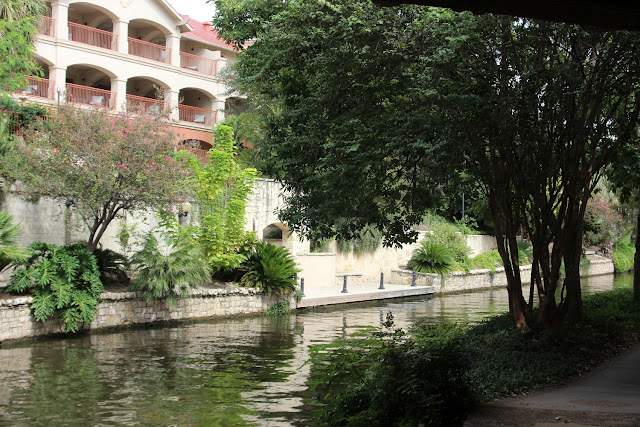 The tour barges like this one will pick you up at designated hotels to begin your tour or you can catch the Rio Taxi marked with checkered flags on the back. 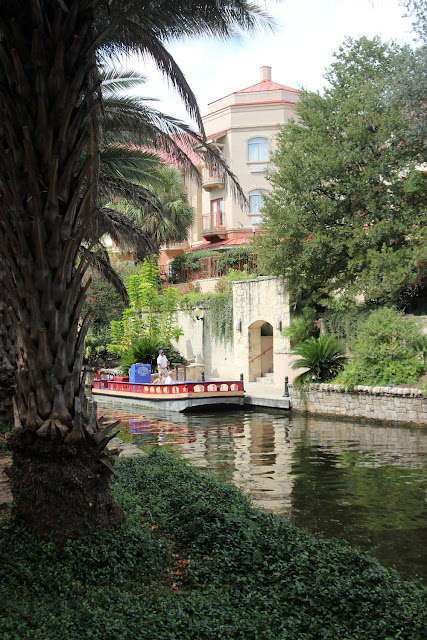 We are now back where we began north of Navarro Street, which concludes our walk for today.  I'll continue walking and posting more this spring.

I've had some questions from readers about distances and public transportation for visitors to the city.  This segment was about one-half mile/800 meters one way and the previous post from Brooklyn Avenue to Navarro Street covered about the same distance.  I walked these two on the same day and divided the posts to make them easier to read.  Taken together they give a good view of the transition from the new to the old segments of the River Walk north of downtown.

Navarro Street is about one mile/1600 meters from the Alamo so visitors staying downtown would need to plan at least a two-mile round trip.  In addition to the Rio Taxi, the VIA bus system has a downtown bus called the VIA Streetcar which will bring you out to this area of the River Walk.  There's also public transportation available for many of the popular attractions outside of downtown.  Information and day passes are available online and at information kiosks throughout the tourist areas.

I am enjoying this project immensely and look forward to exploring the areas that are new to me south of town.
Posted by Shirley Fox at 11:30 AM