As spring turns to summer tomorrow and the weather becomes too hot to spend much time in the garden I enjoy taking a tour to review recent projects and changes.

A cooler wetter spring brought more flowers than usual and bright green foliage which are giving way to the tawny tones of summer.  Silvery agaves and yuccas now become the main focal points. 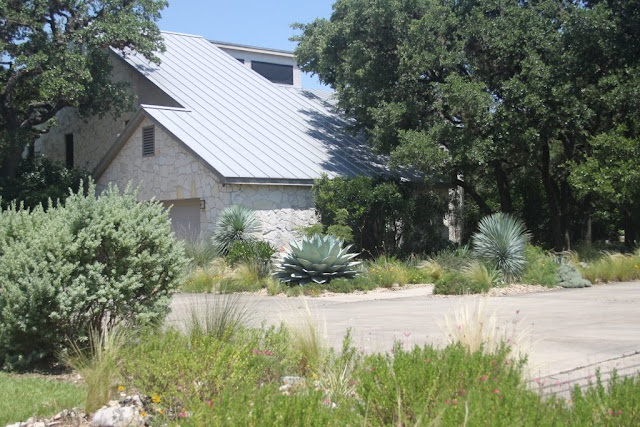 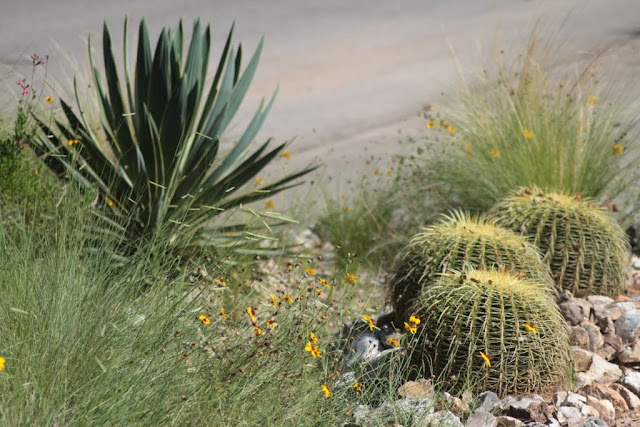 The colors work in nicely with yuccas in the front bed. 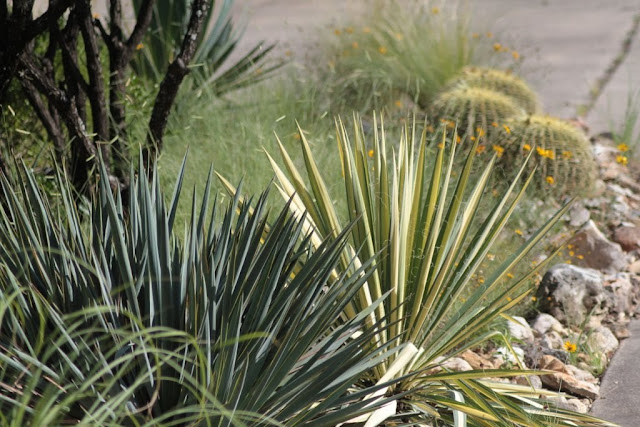 Yucca gloriosa variegata is thriving where many other plants failed in the hottest spot of our property. 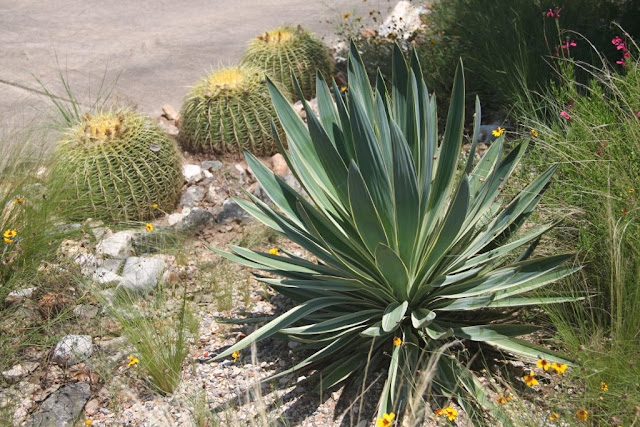 I gave up trying to grow flowers in front of the tilted flower pot and planted low-growing Agave leopoldi which will be much easier to manage. 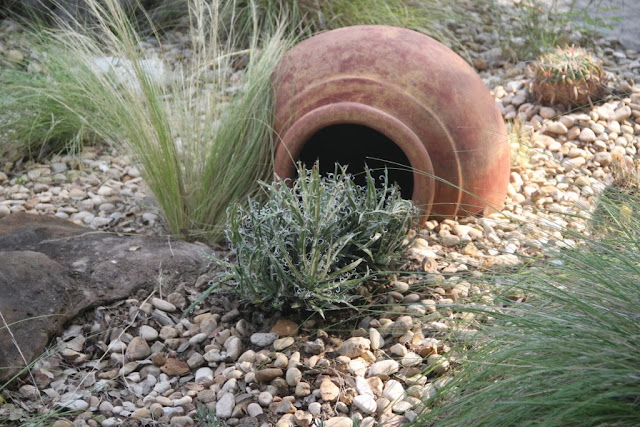 Three Agave cornelius along the drive were spruced up with a rock planter and new coat of gravel.  We mound agaves, yuccas and cacti to allow drainage after major rain events. 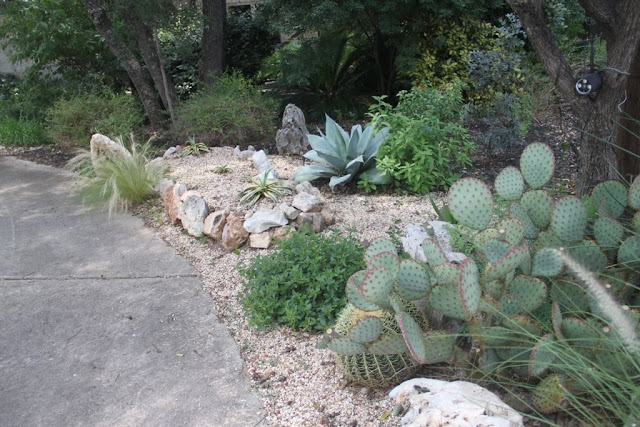 Finally got a good photo of this area.  It looks so good in person but has always been hard to convey on the blog.  Woolly Stemodia with a backdrop of white Plumbago and silvery estafiate.  Plumbago usually takes much longer to reappear after a cold winter so this year I tried covering it during freezes.  Not the prettiest technique since I used cheap bedsheets from garage sales but the results are worth it. 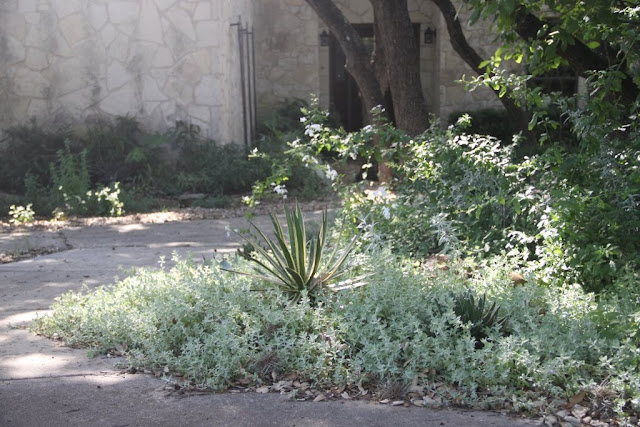 Carex 'Evergold' (lower right) has been added to the collection of greenery in white pots. 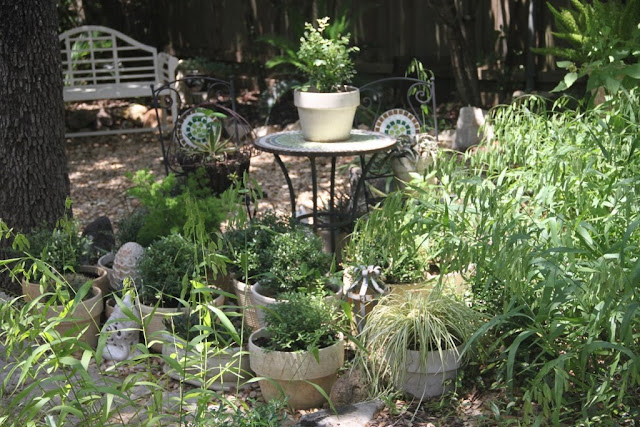 White Caladiums and Aztec Grass carry the theme of white accents across the walk. 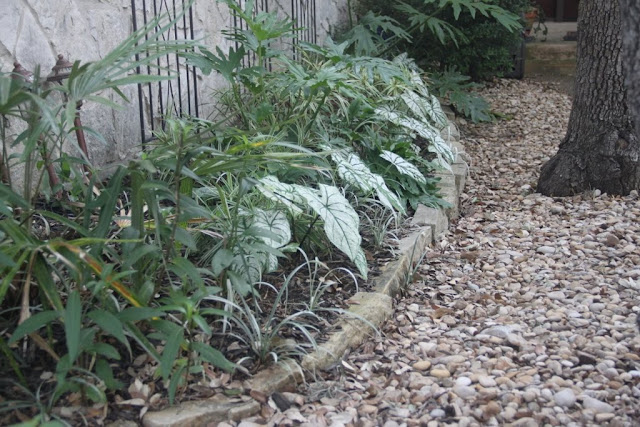 Sparkler Sedge (spiky variegated, front right) gets in the picture too.  I added five more this spring for a total of nine in this bed.  That might be enough, for now. 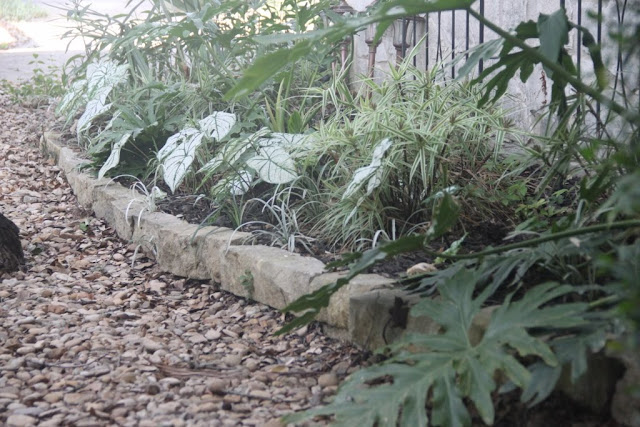 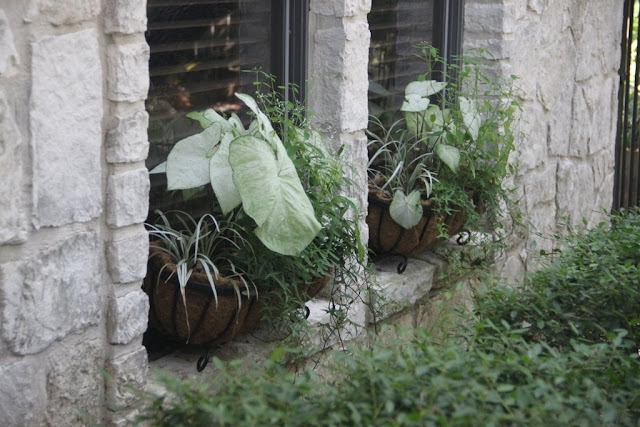 We trimmed the hedge down and replaced low wood boxes with taller crib-style planters which show up well from the driveway. 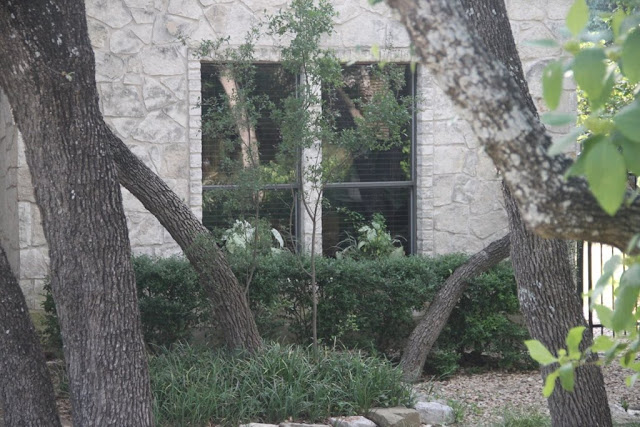 After years of experiments with container plantings that turned out boring after a few weeks I stuck Agave vilmoriniana or Octopus Agave in the pot by the tree to fill it in for a visit by my garden club.  It was a hit so it stays unless the deer begin to bother it. 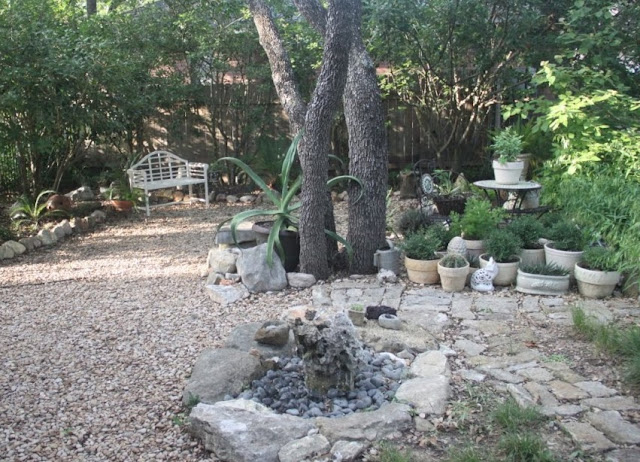 Agave stricta is blooming again for the second year in a row.  Unlike most agaves it does not die after blooming. 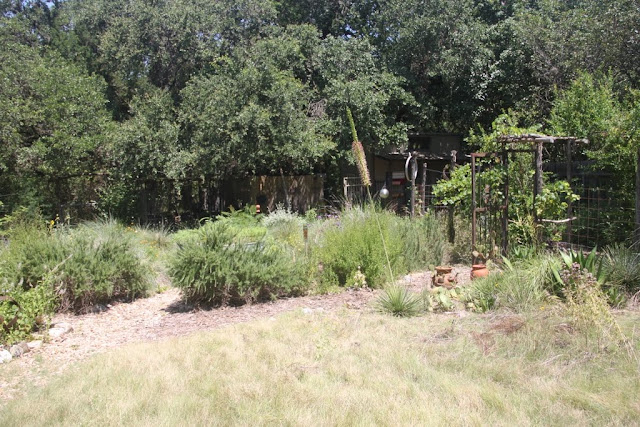 It may act more like a yucca, but the small lily-like flowers are definitely agave. 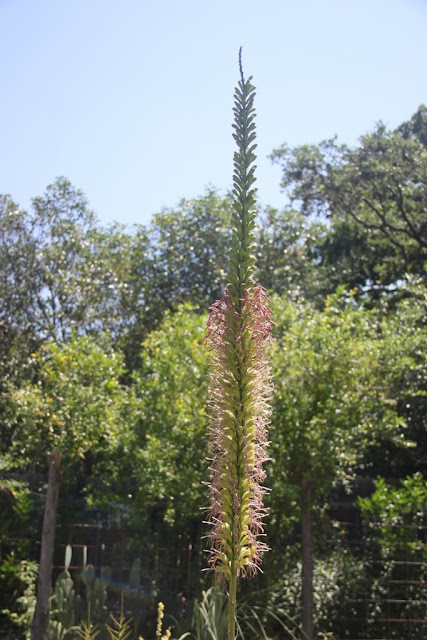 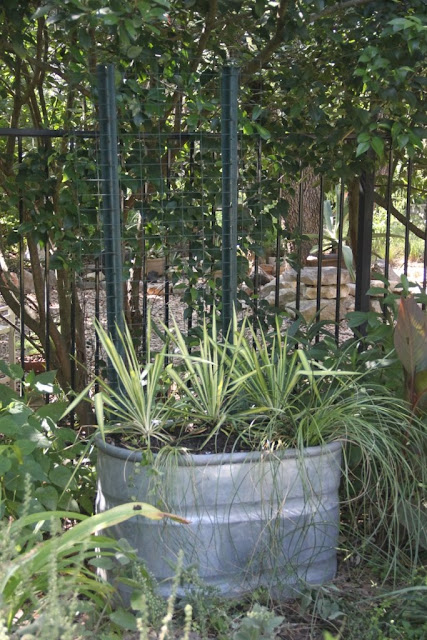 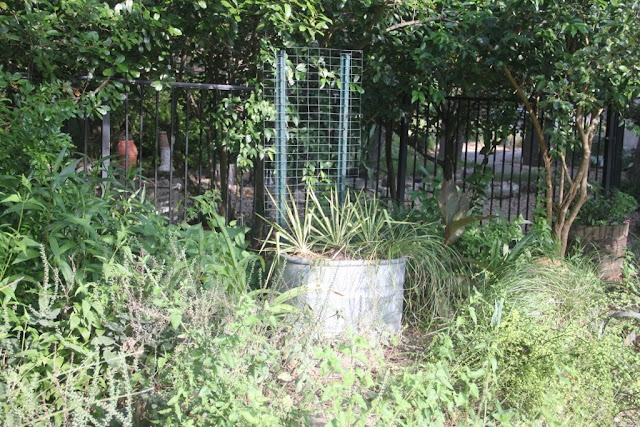 Grapes are quickly climbing over the arbor in the fenced garden. 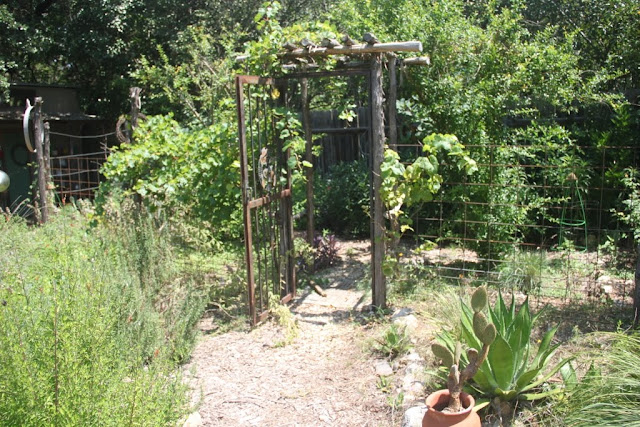 Blanc du Bois, I might need a few more to make wine.  They are there for the birds to enjoy. 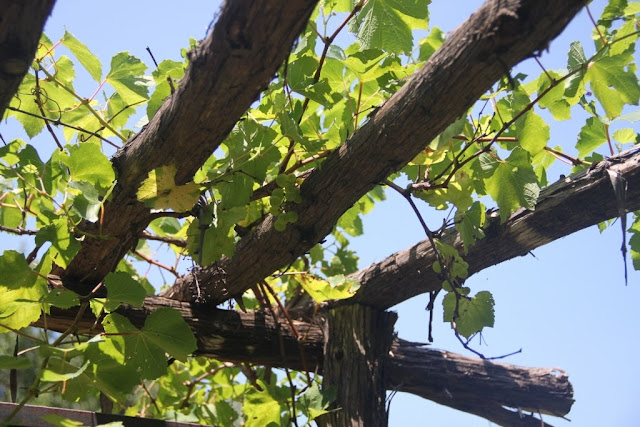 The circle garden has bloomed out so the ornamental grasses take over adding texture and movement for the next two months. 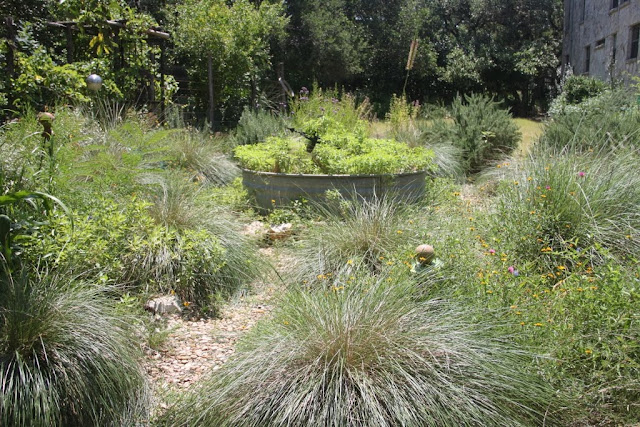 One bright spot by the herb garden. 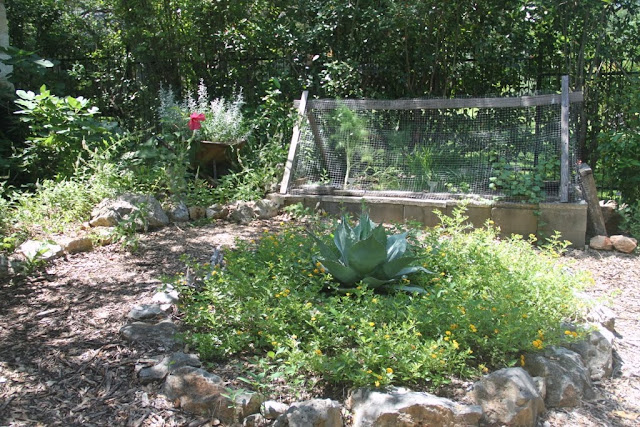 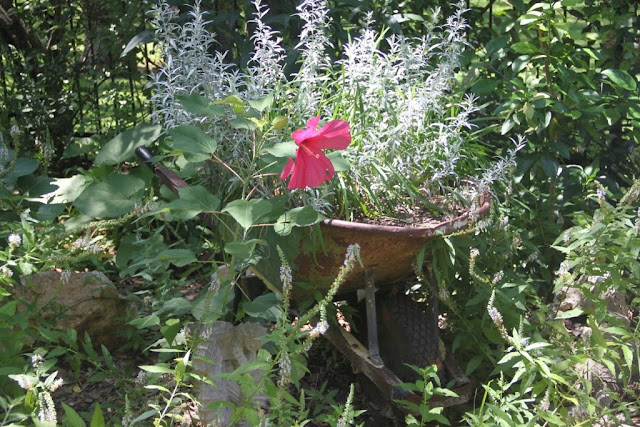 Happy Summer!  Beautiful hibiscus for our climate which should bloom all summer with little care. 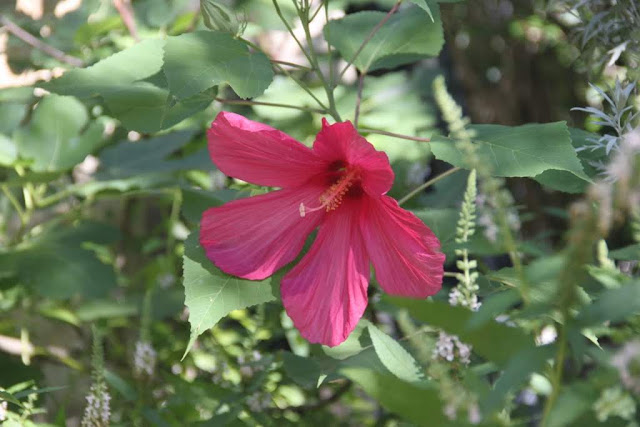 We'll end our tour as usual with a peek over the back gate as spring fades into the sunset. 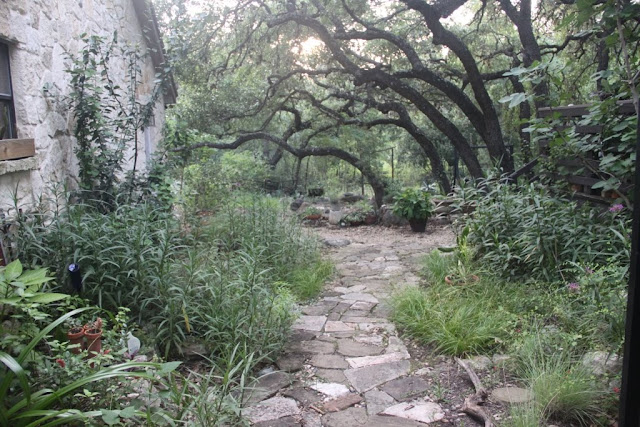 And that's the tour as my garden and the gardener will weather the next few weeks in our own way.
Posted by Shirley Fox at 9:22 PM