Exactly seven years ago on October 9th, 2011, just a few days after I began this blog, one of my first posts was a "Before and After" of our front garden and I've kept that theme as an annual feature to show my yearly progress.

Just a year into a complete revision of our landscape I took this photo to document how good it looked.  We had just finished putting rocks in the mailbox strip along the road.  The deep pink Salvia greggii had been in place about 15 years when we divided and replanted them to fit the new scheme.  Just a few months later those blooms were the highlight of our landscape. 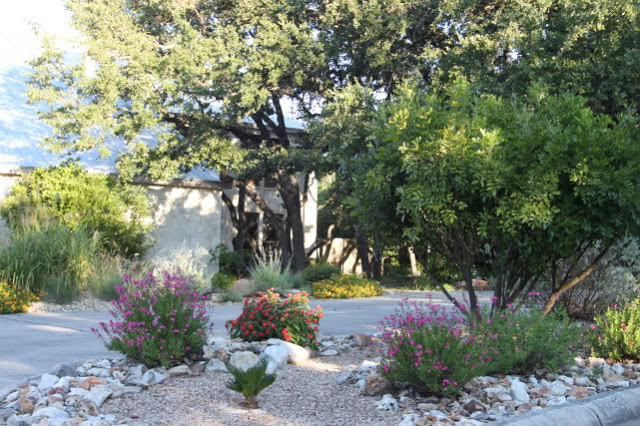 The following year in 2011 we had the first of two severe drought years and everything looked terrible.  October 9th just happens to be a date for which I had a good "before" photo from 2010 that I could use to write about my disappointment here on my new blog.  Toasted grasses and under performing salvia were a step backwards in 2011. 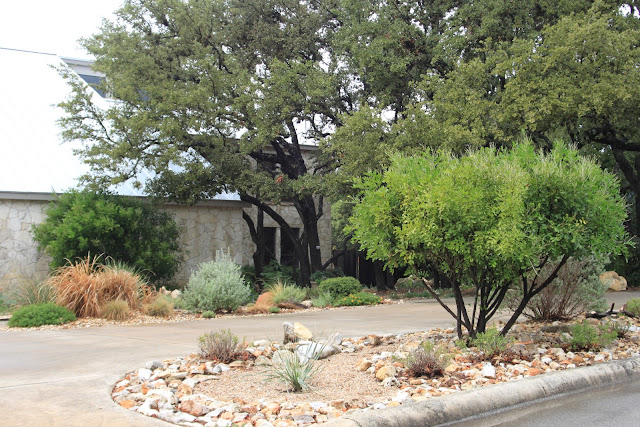 Over time I expanded the view to include the driveway and front corner of the garage.

2018:  Today's view was taken yesterday between torrents of rain which have fallen on a near daily basis since early September (nearly 30 inches in four weeks).  Good thing since today turned out dark and rainy too. 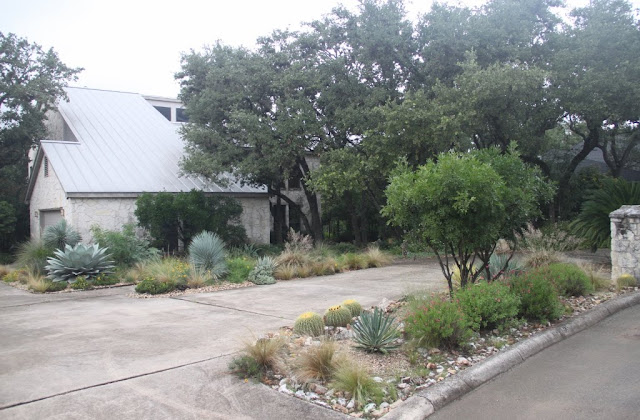 The new Yucca rostrata has been in place nearly a year behind the big Agave ovatifolia and the smaller Yucca rostrata in the island bed is growing up nicely.  Native muhly grasses are beginning to bloom and a yellow blooms of Damianita, Skeleton-leaf Goldeneye, and gold Lantana make up for missing sunshine.  I am so impressed with how desert native Skeleton-leaf Goldeneye (Viguiera stenoloba) has weathered our rain that I'll feature it in a future post.  We've lost a few drought tolerant plants with all this rain but most of my favorite agaves and yuccas are mounded up with gravel for drainage for just such an event.  New to this area are the 'Blonde Ambition' grama grasses I featured in my Blogiversary post last week which are just visible behind the Texas Mountain Laurel to the left of the mailbox.

Here's last year's (2017) view for comparison.  This year in the spring I cut the salvias back to the ground again.  They have responded by growing greener and fuller.  Blooms might be sparse due to a lack of sunny days.  Wow, the small Yucca rostrata (center) has grown a lot with all this rain! 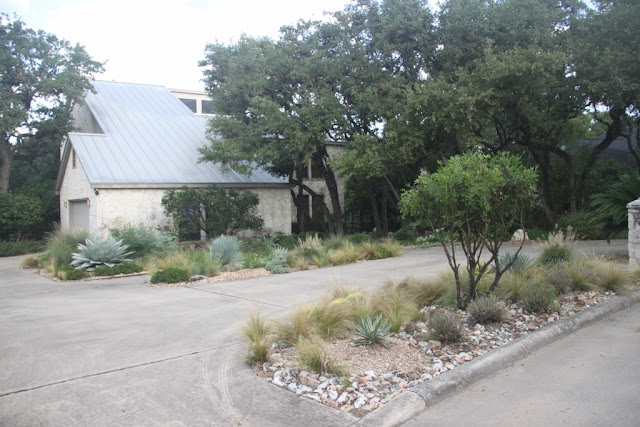 Back to 2018 this wider view photo taken earlier in October on a rare sunny day includes landscaping at the end of the driveway and gives a better view of the new yucca on the garage corner. 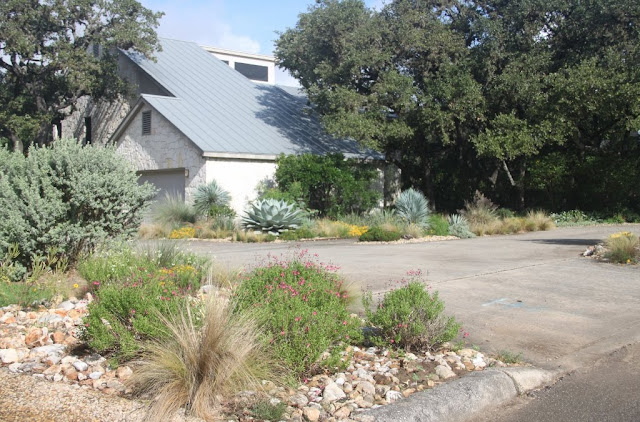 And now with seven years of blogging behind me this post would get quite long if I included all of the photos with changes over time.  You can see details of my previous October 9th posts and the changes I've made over the years at the links below.