It is a busy time for wildlife in the garden: harvesting berries, raising babies, and trying to eat my plants.  It all makes for quite a Wildlife Wednesday show.  Wildlife Wednesday is hosted by Tina at "My gardener says...." on the first Wednesday of each month.

Its bright magenta berries ripen in stages from the trunk.  Mockingbirds and Cardinals are the usual visitors and often wait patiently in nearby trees during the day to snatch each individual berry as it ripens. 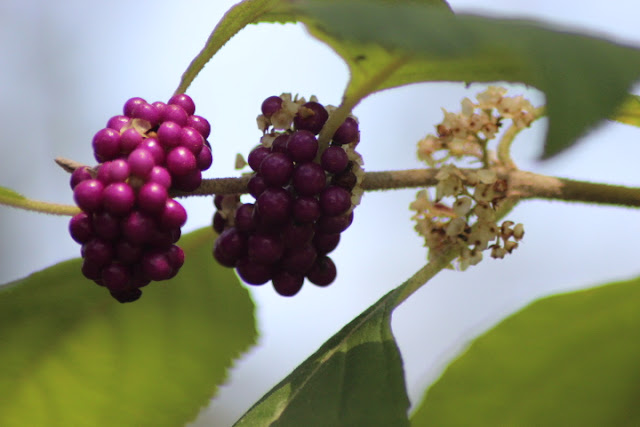 Beautyberries are edible and apparently make a nice jelly but that will have to wait since all berries are now gone.  Fortunately this graceful native shrub roots easily where branches touch the ground, otherwise it wouldn't be easy to make new ones from seeds alone. 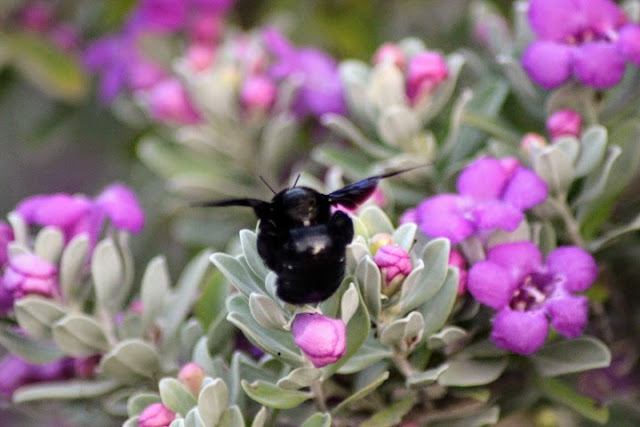 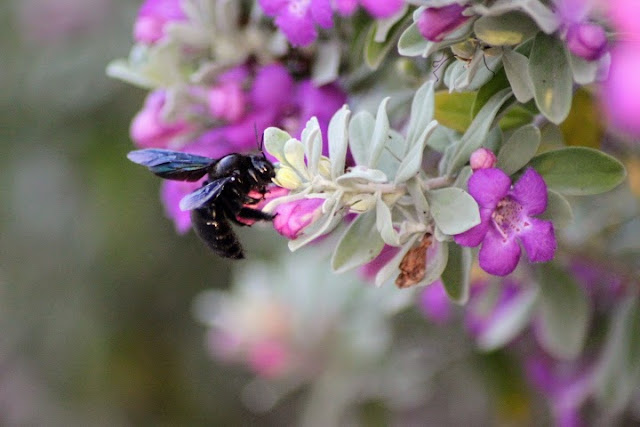 If you've been noticing brown branch tips like this on trees in San Antonio.... 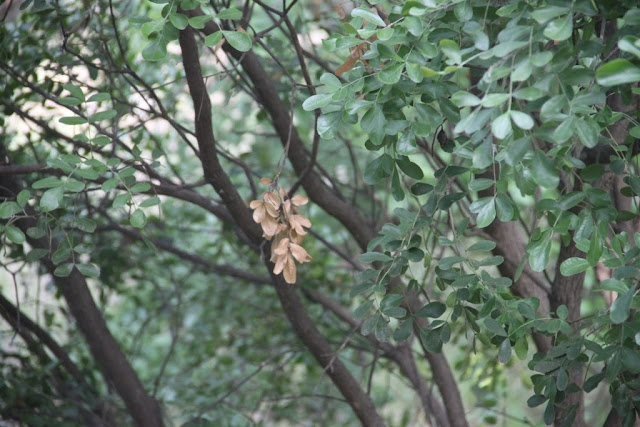 .....those noisy Cicadas are the likely culprit. 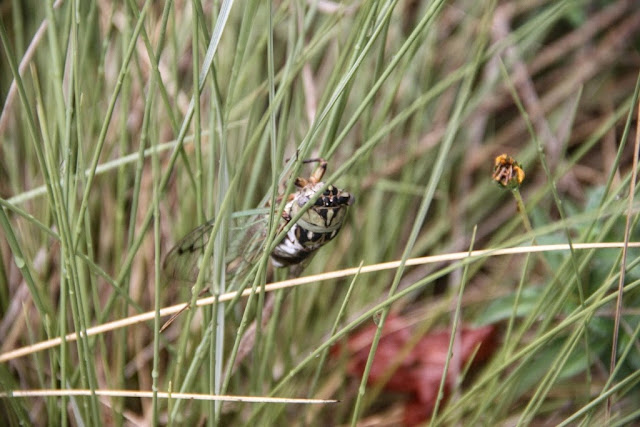 While we don't get the crazy 17-year Cicada emergence cycles common on the East Coast and in the Mid-West, there was a large population of Cicadas this summer in my neighborhood.   Female Cicadas lay eggs in the branch tips by sawing an opening which leads to this effect.  Here's an explanation from State of the Planet by Columbia University's Earth Institute:


"Each brown branch tip you see is a spot where a female cicada sawed through a small twig with an appendage on her abdomen and laid a group of eggs.   When those eggs hatch – six to ten weeks after being laid – the newborn nymphs will drop to the ground, burrow down into the soil, and begin feeding on tree roots."

The effect is quite recognizable once you know what to look for. 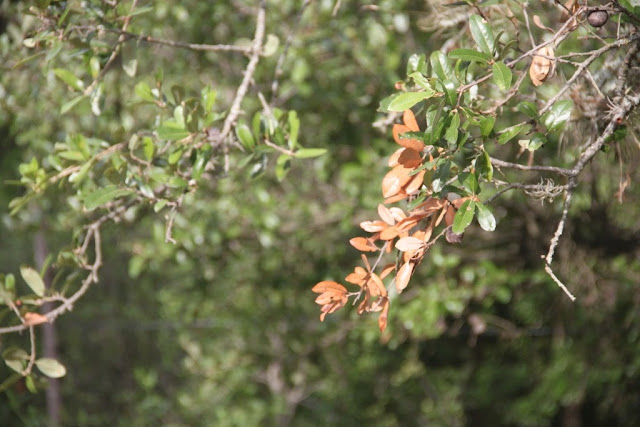 Browned tips are noticeable all over my neighborhood this year. 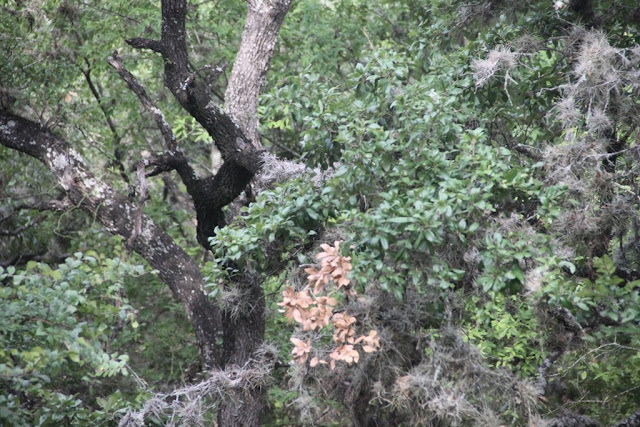 Not the prettiest spot in the garden, but the toad likes it just fine. 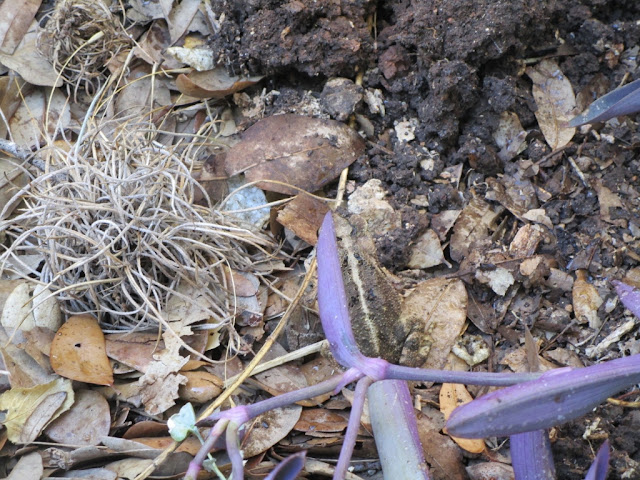 Time to check in on the resident deer.

A fawn quickly losing its spots.  This one is probably about three or four months old and likely not the same newborn I featured in last month's post. 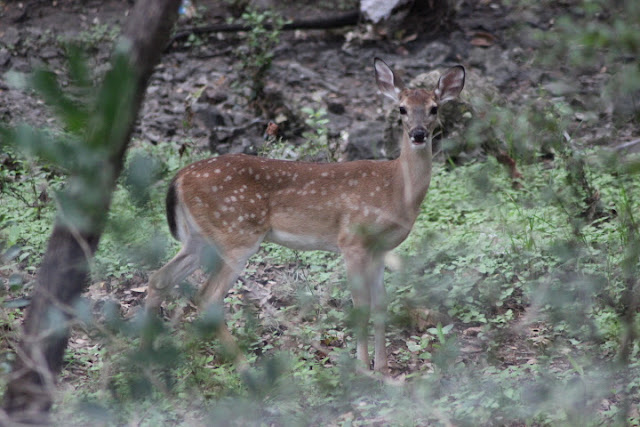 Mom is still watchful and will continue to nurse for another month or so. 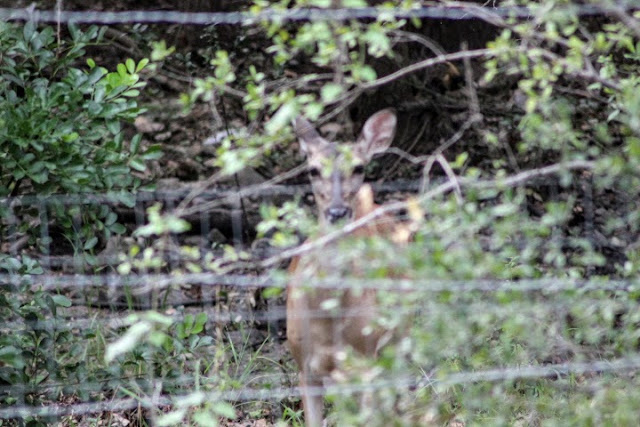 An eight-point buck has taken up residence by the gate where we put garden trimmings out to compost.  He's probably eyeing that Evergreen Sumac (Rhus virens) in the foreground which wouldn't stand a chance without the fence.  I am that close to him.  No way would I be able to get that close a few months from now.  He'll soon be looking for plants to polish those antlers ahead of mating season.  The "antlering" of plants is the most destructive thing they do in the garden. 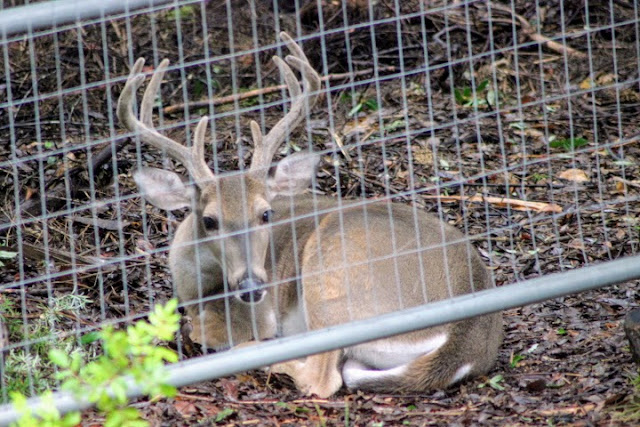 If they would just stay in the woods and away from the garden.

Visit "My gardener says..." for more garden wildlife posts.   This month Tina has excellent information on how you can help hummingbirds with their migration since their favorite stop in Rockport, Texas is out of commission as result as Hurricane Harvey damage.
Posted by Shirley Fox at 9:11 AM