A light freeze was predicted overnight for San Antonio.  There was a surprise waiting when I looked outside this morning. 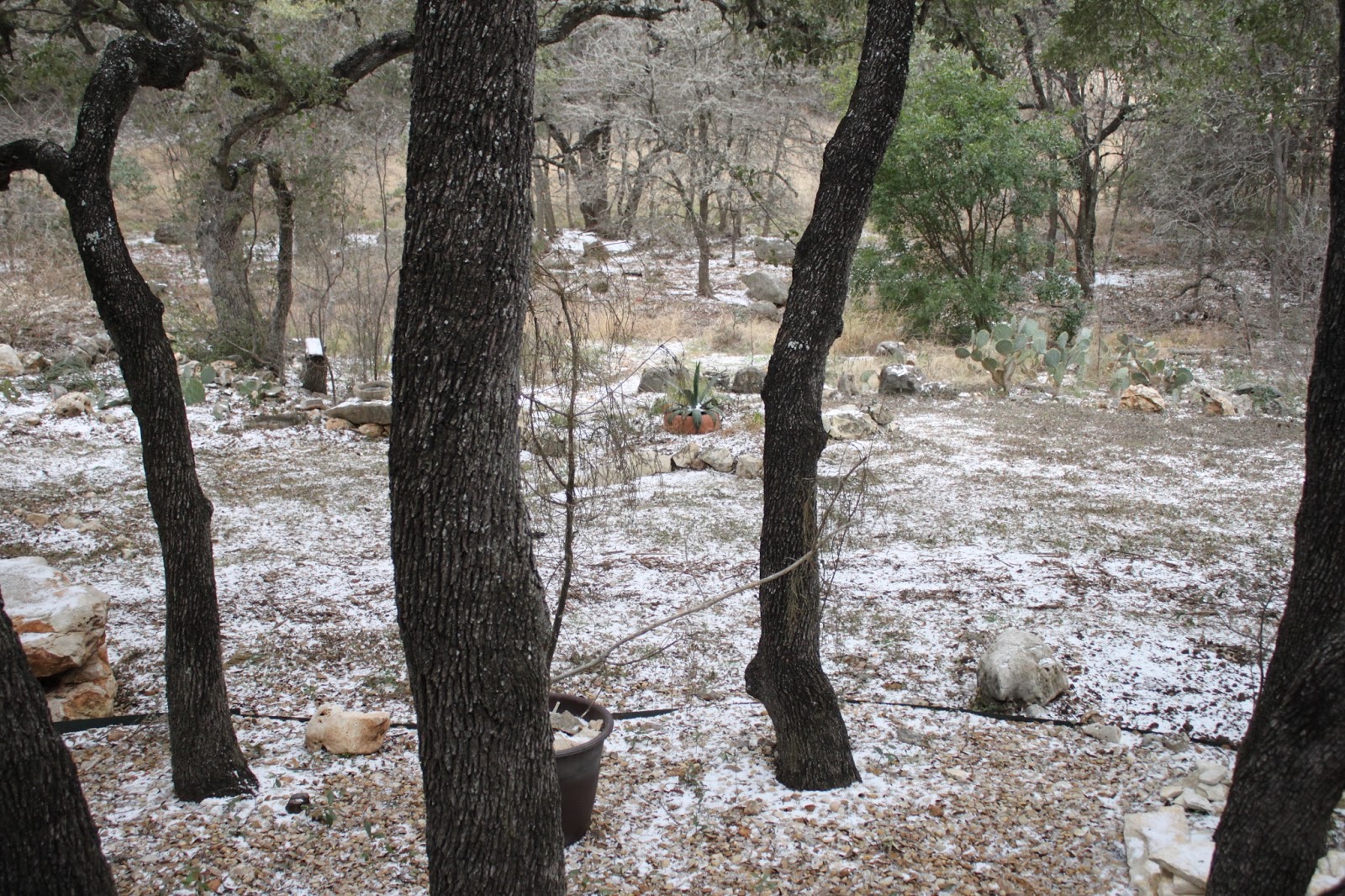 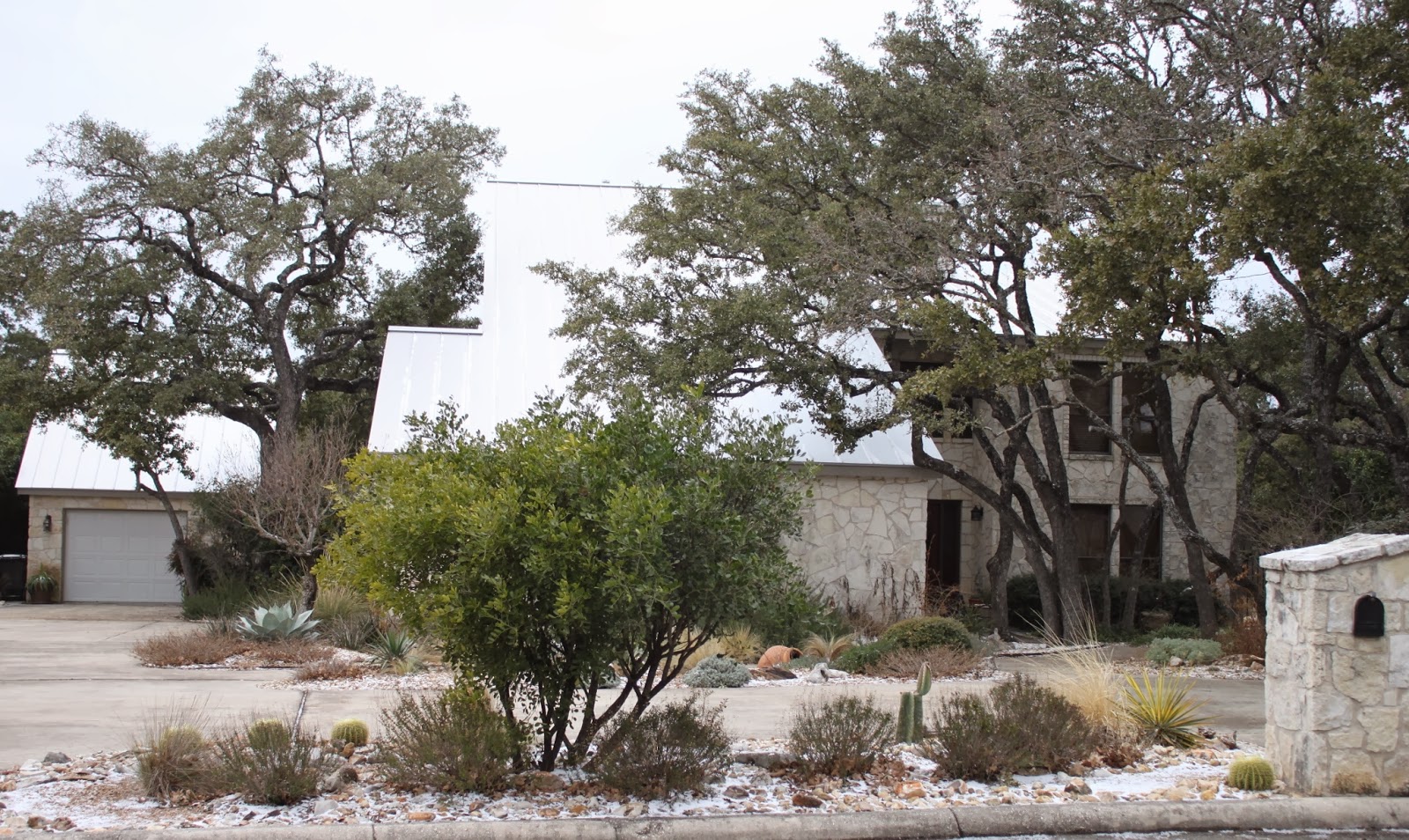 Kind of looks like snow but it's not snow.  It's ice pellets.  Beady, granular ice pellets look like they fell out of a bean bag chair.   Update:  These pellets are known as "graupel" which started as snowflakes which were coated in ice as they fell.

Even in a cold climate this would be an unusual weather event.  Imagine how this seems in typically warm, sunny San Antonio. 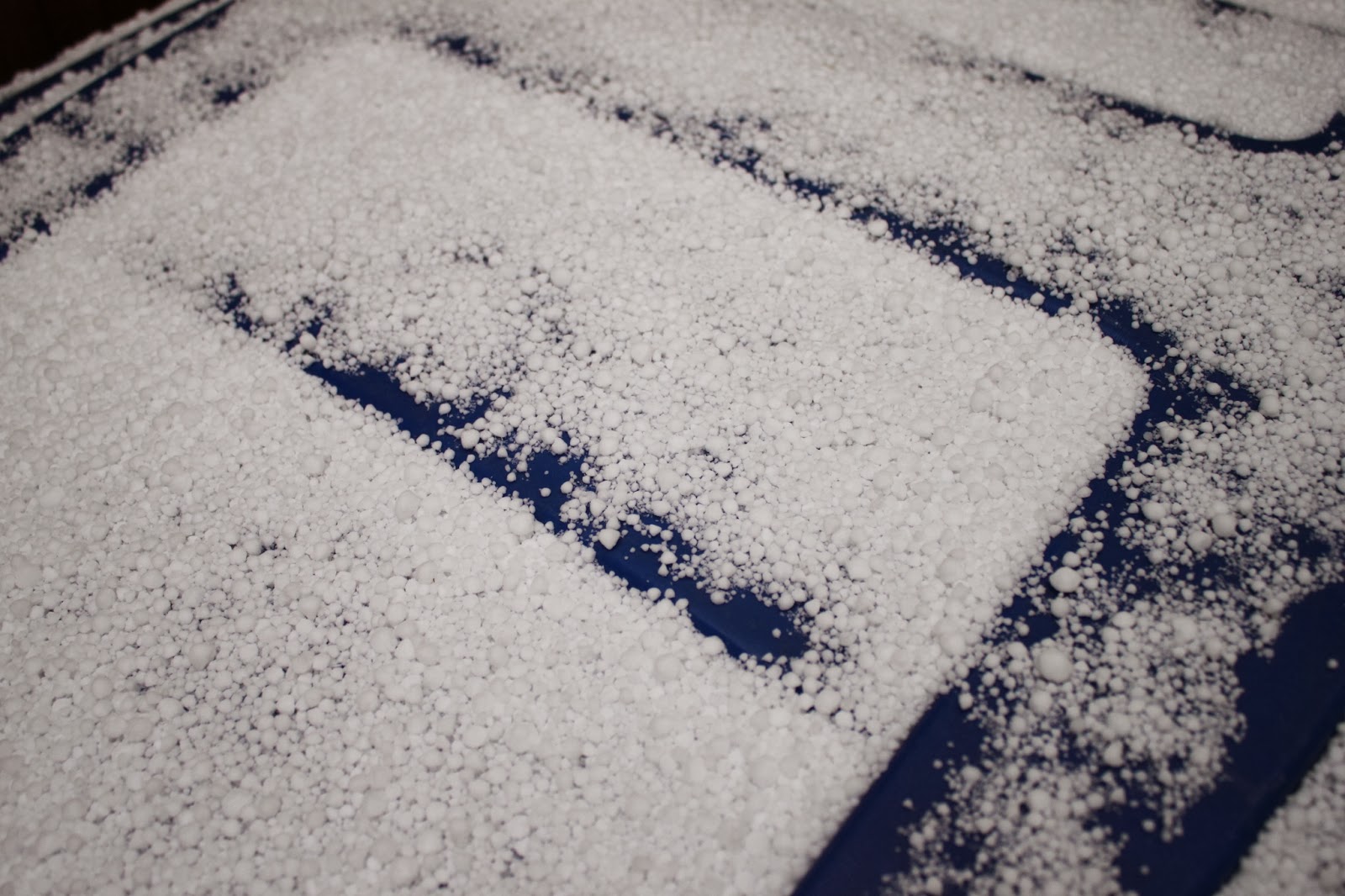 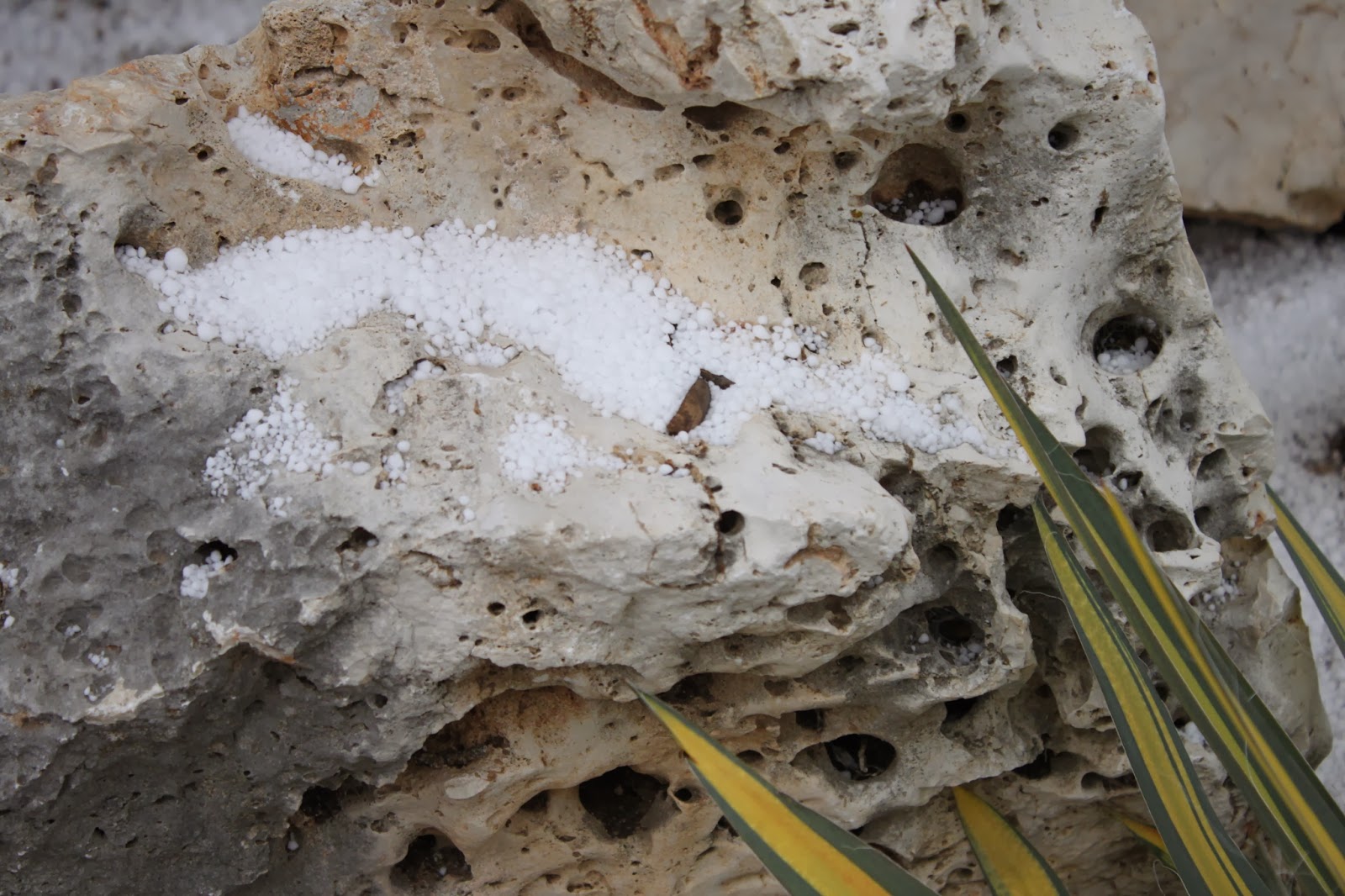 Our resident gray fox was startled at the water dish we keep out for wildlife. 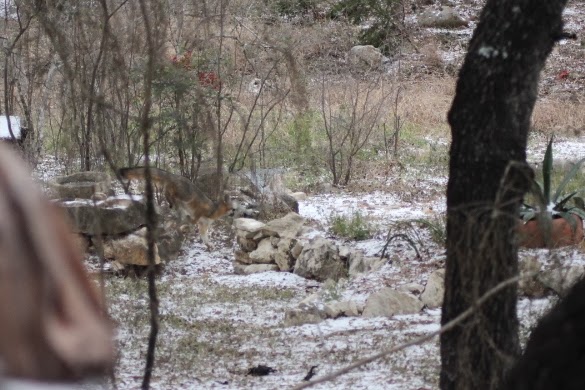 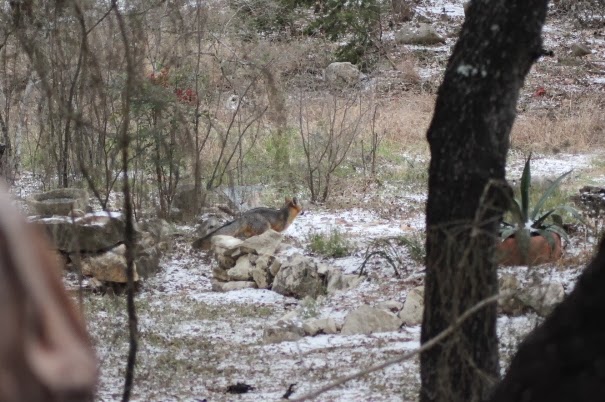 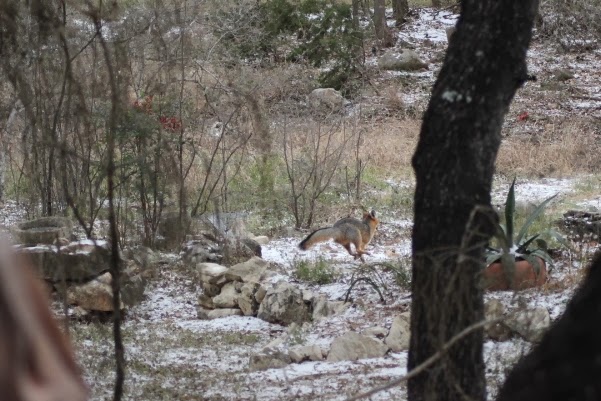 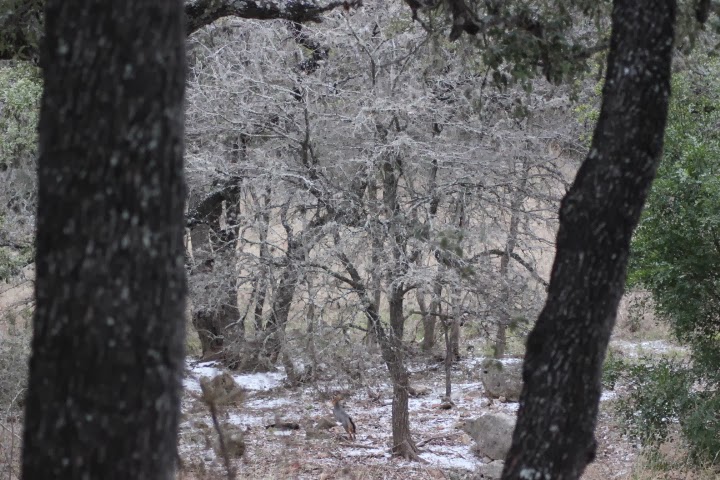 The fox was trying to find water in the frozen bowl.  We put some warm water in there after this photo was taken but I'm not sure it will be back soon. 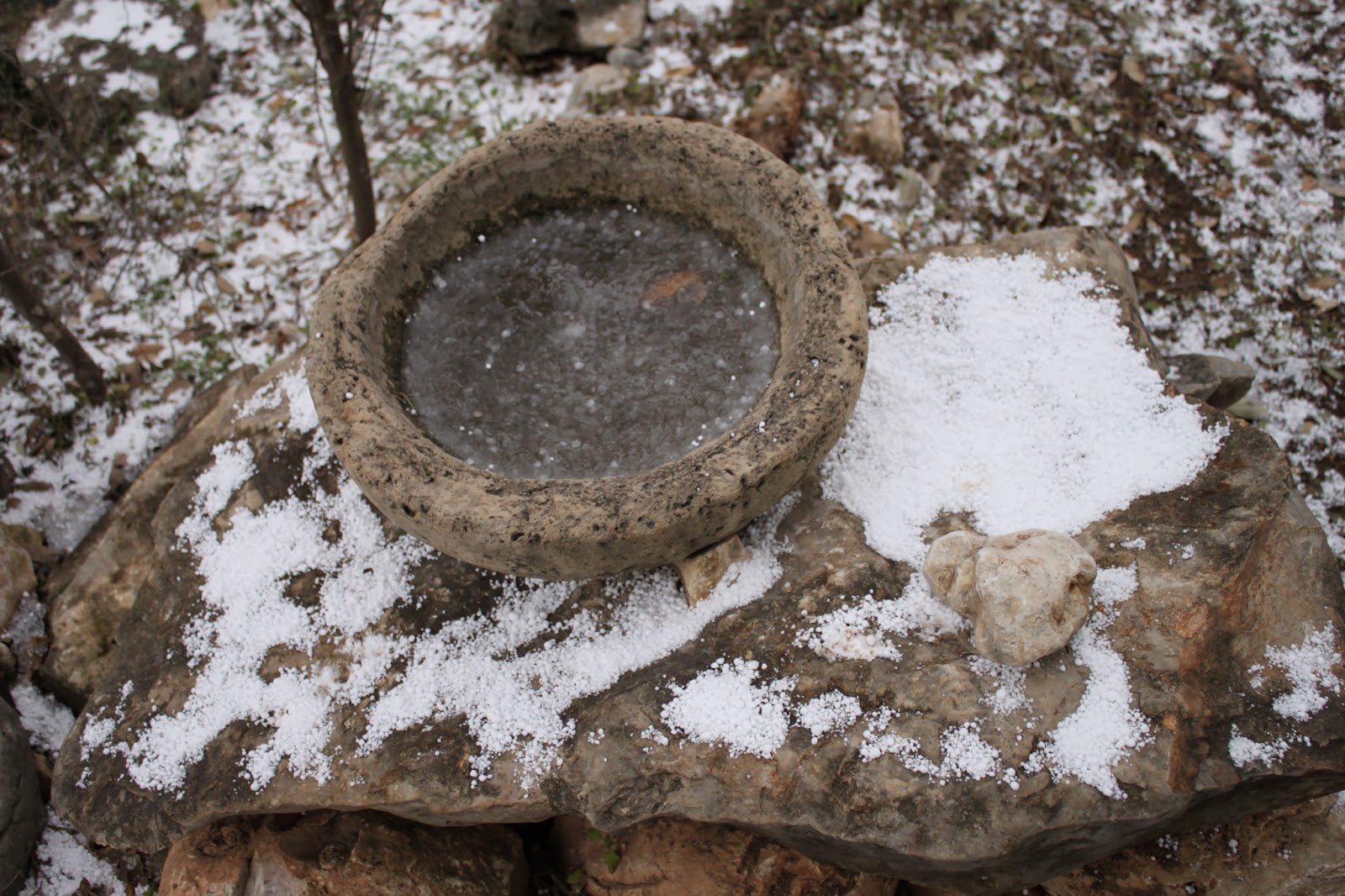 The birds didn't fare much better so we warmed up water for them too. 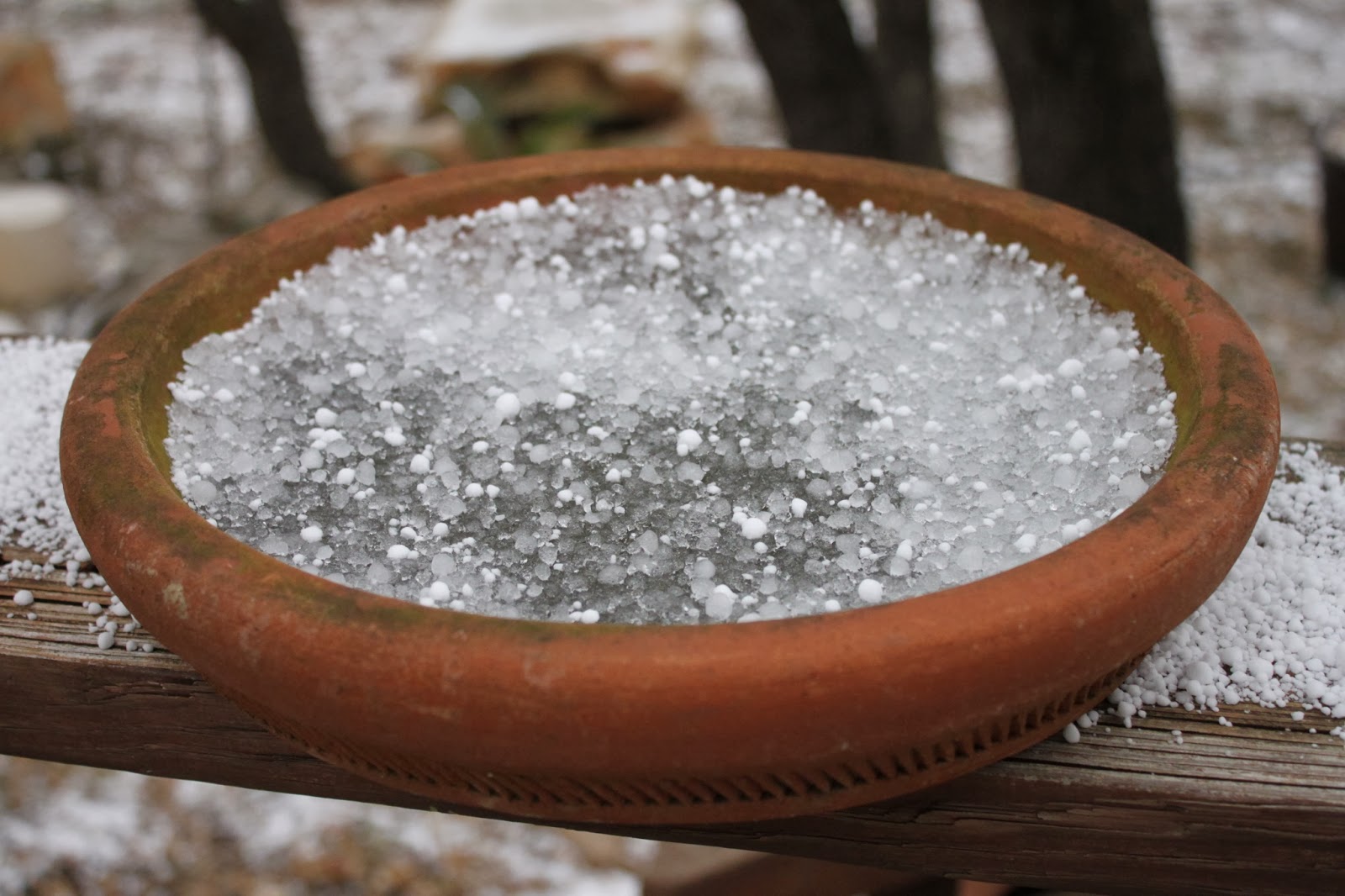 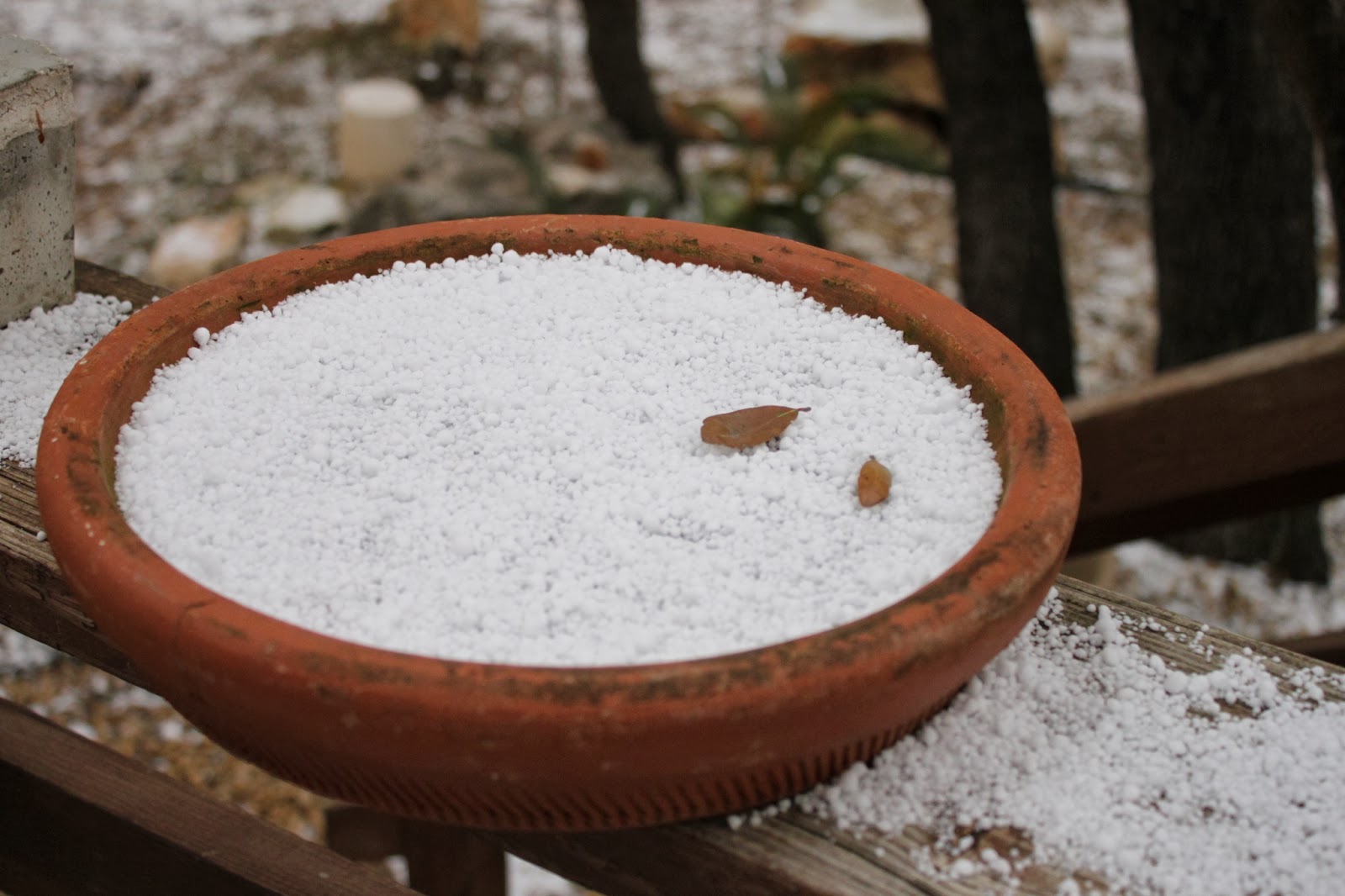 The cactus garden seems to be okay. 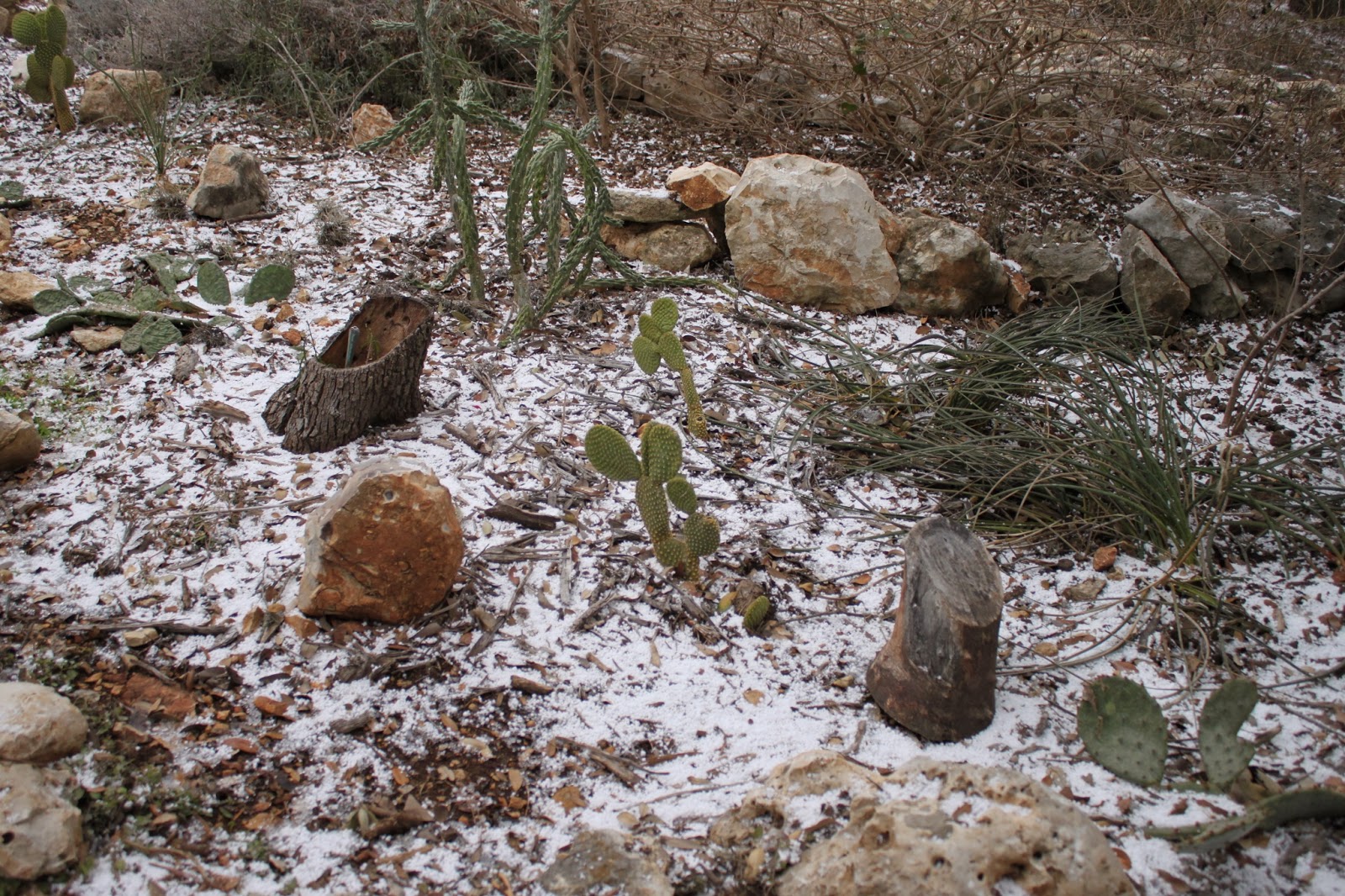 Agaves are still taking this winter in stride. 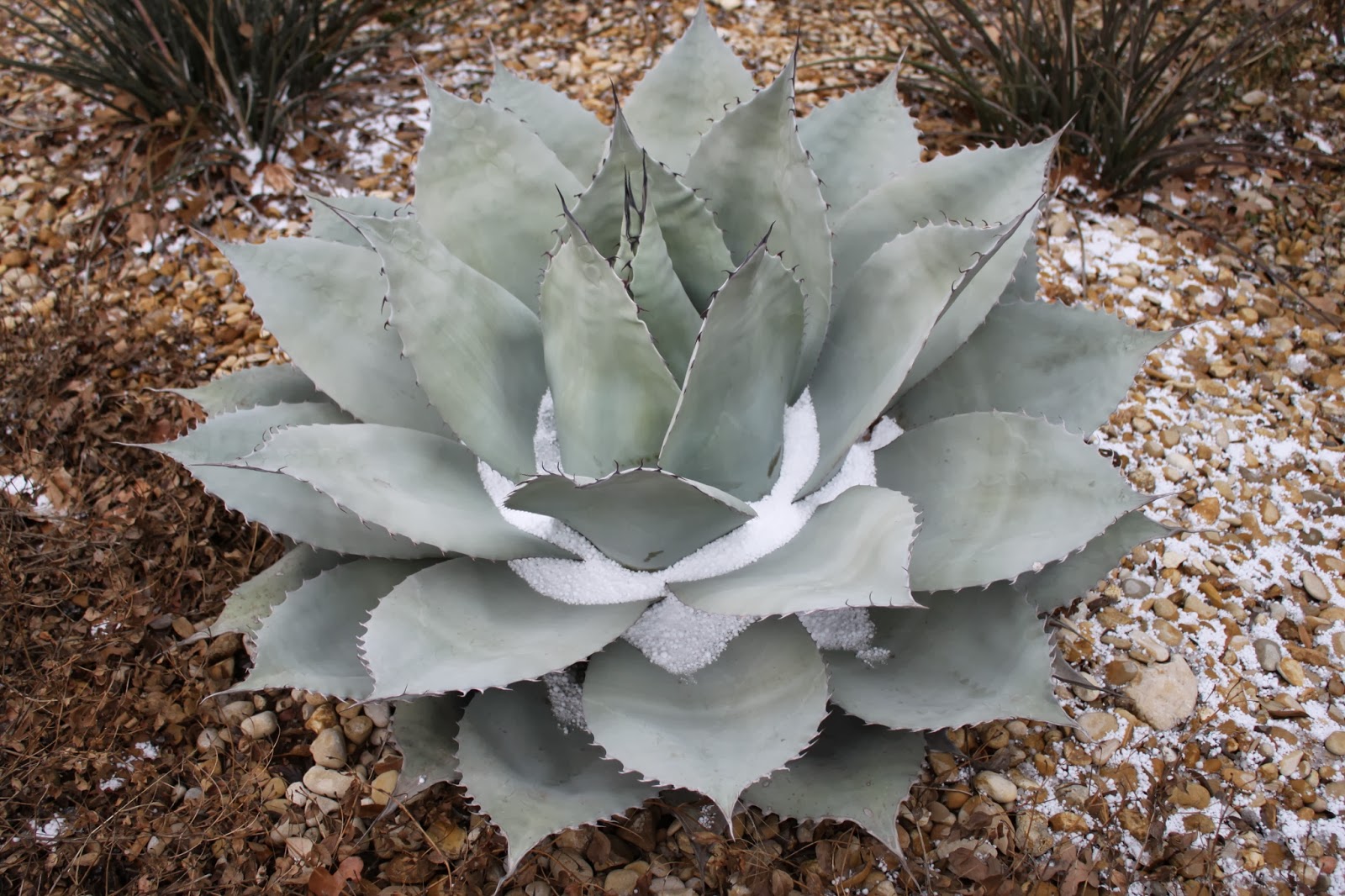 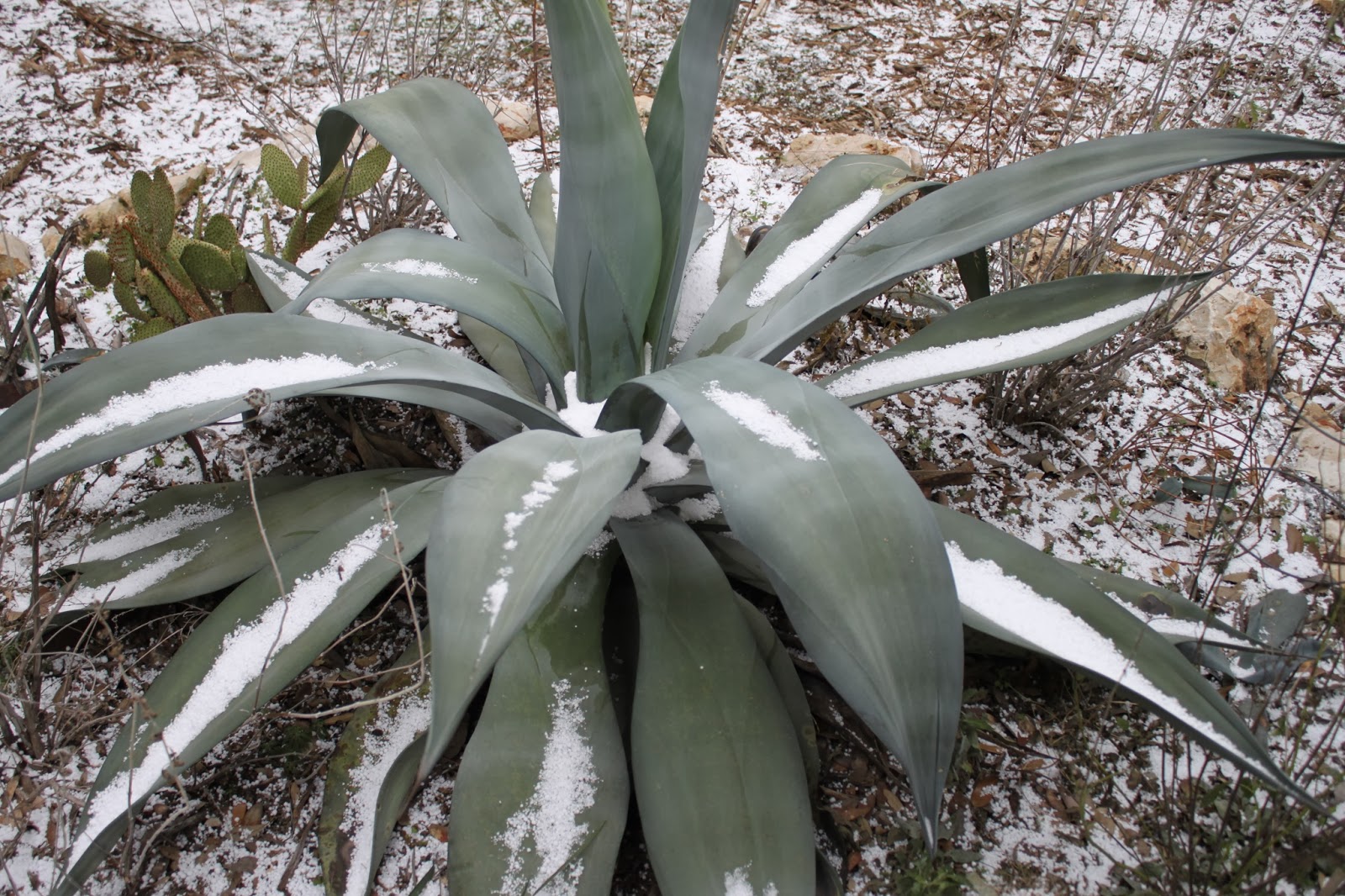 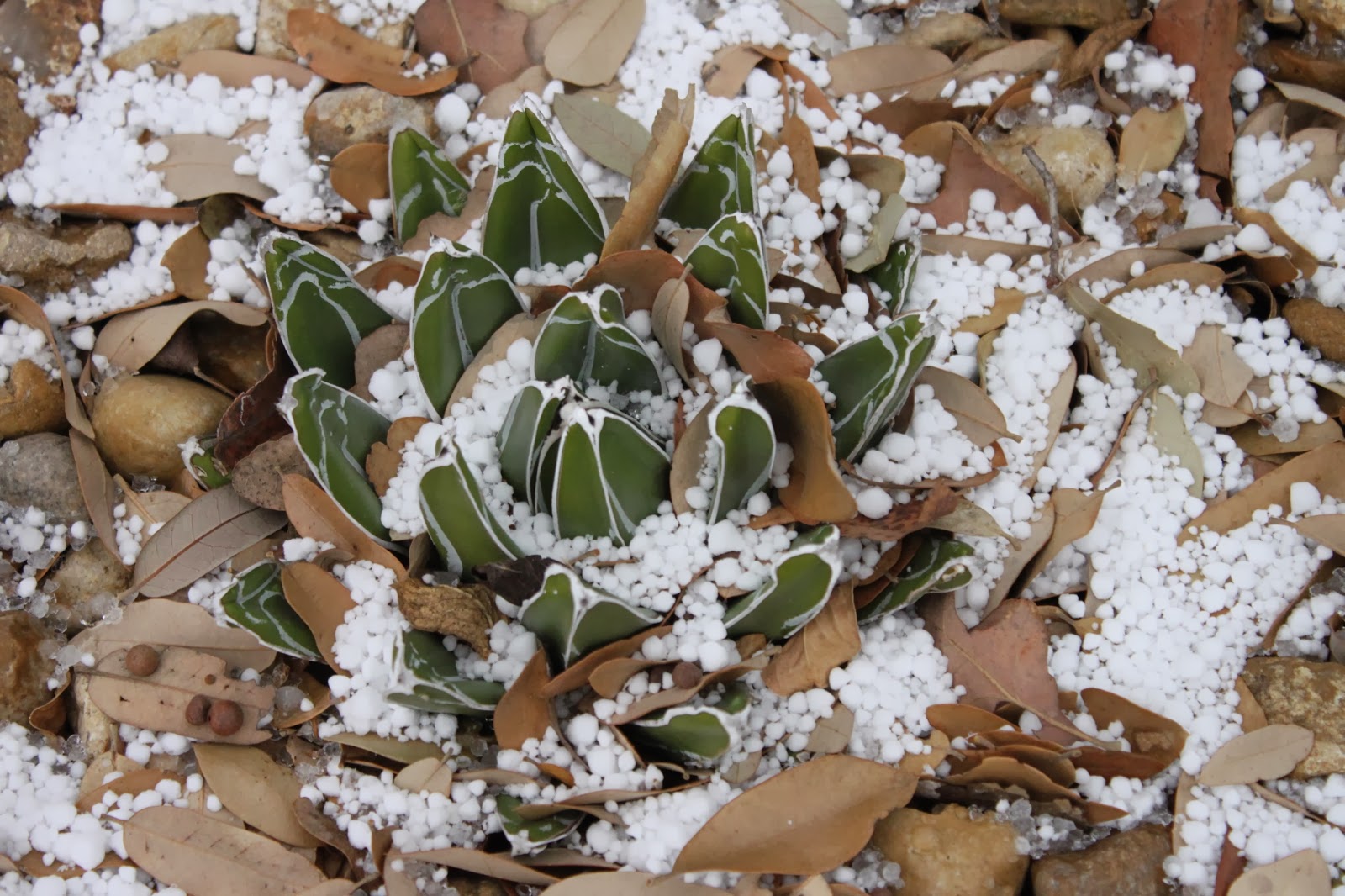 Nothing seems to bother Germander and Rosemary. 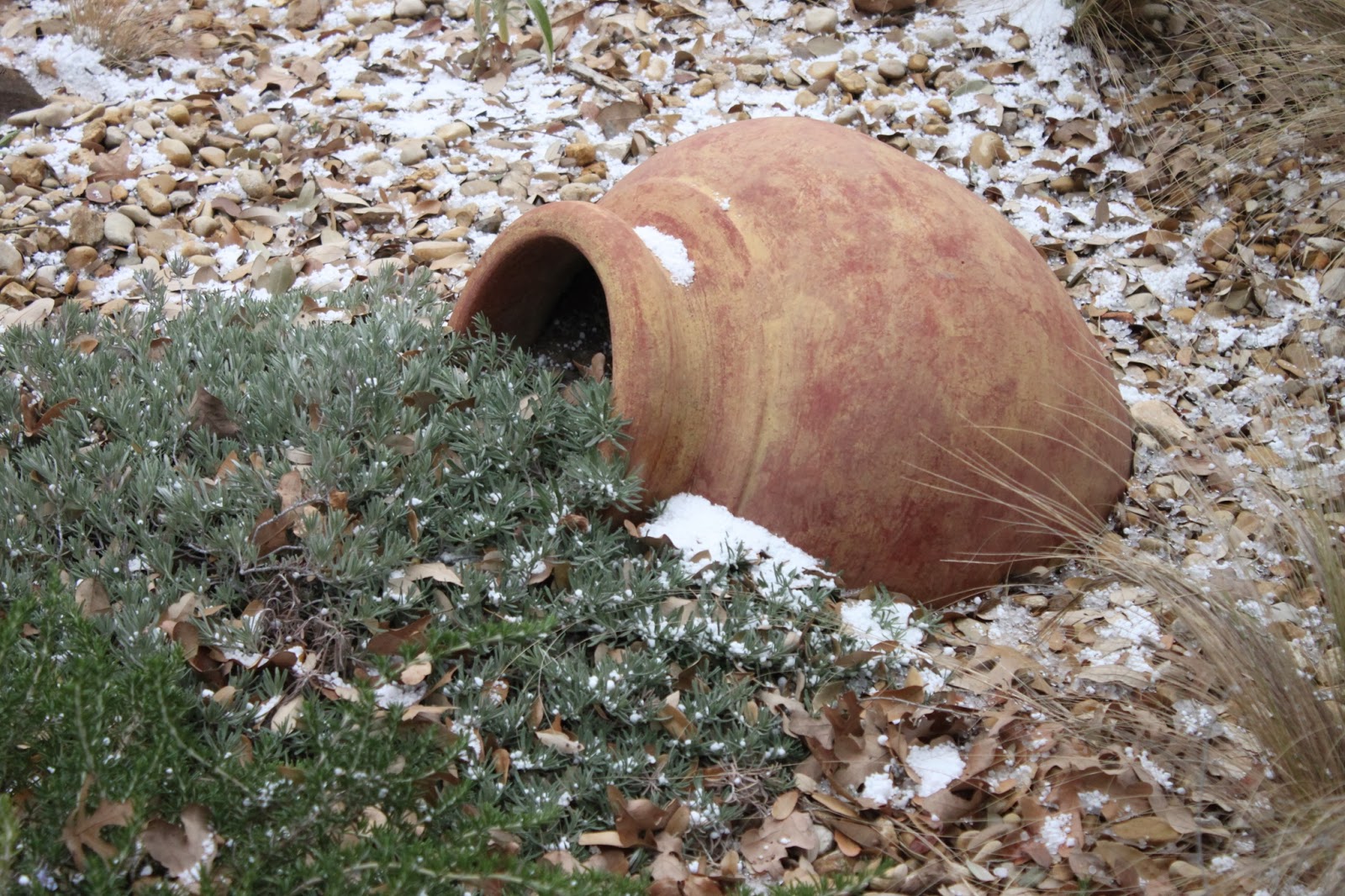 The unknown yucca is looking good.  I thought this might be a tropical yucca when it was given to me by a gardening friend but it is apparently quite hardy.  The Opuntia Santa-rita is turning bright purple in this colder than usual winter.  The Bismarck Palm is not looking so good.  It might still be alive but will take a while to grow new fronds. 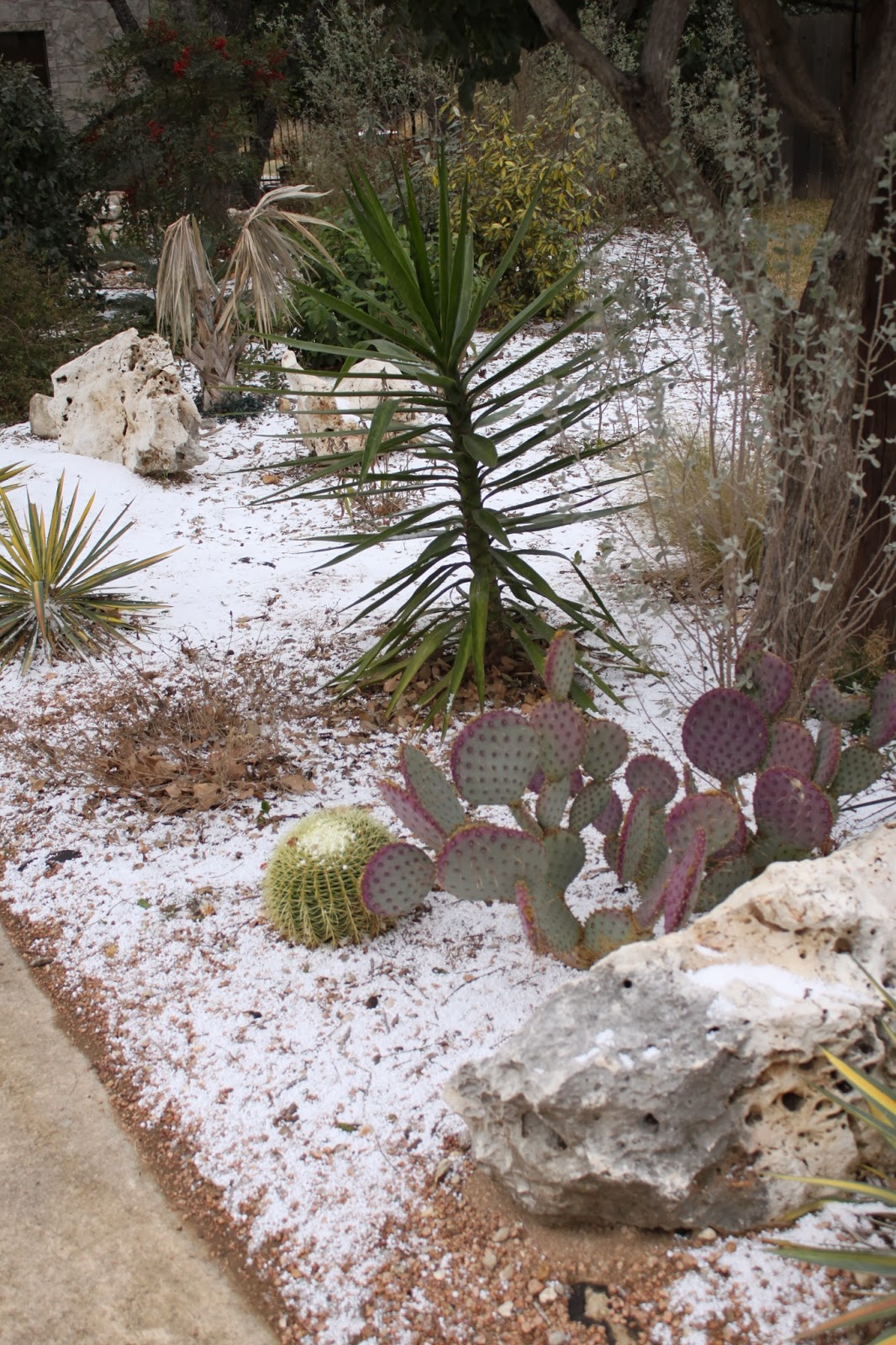 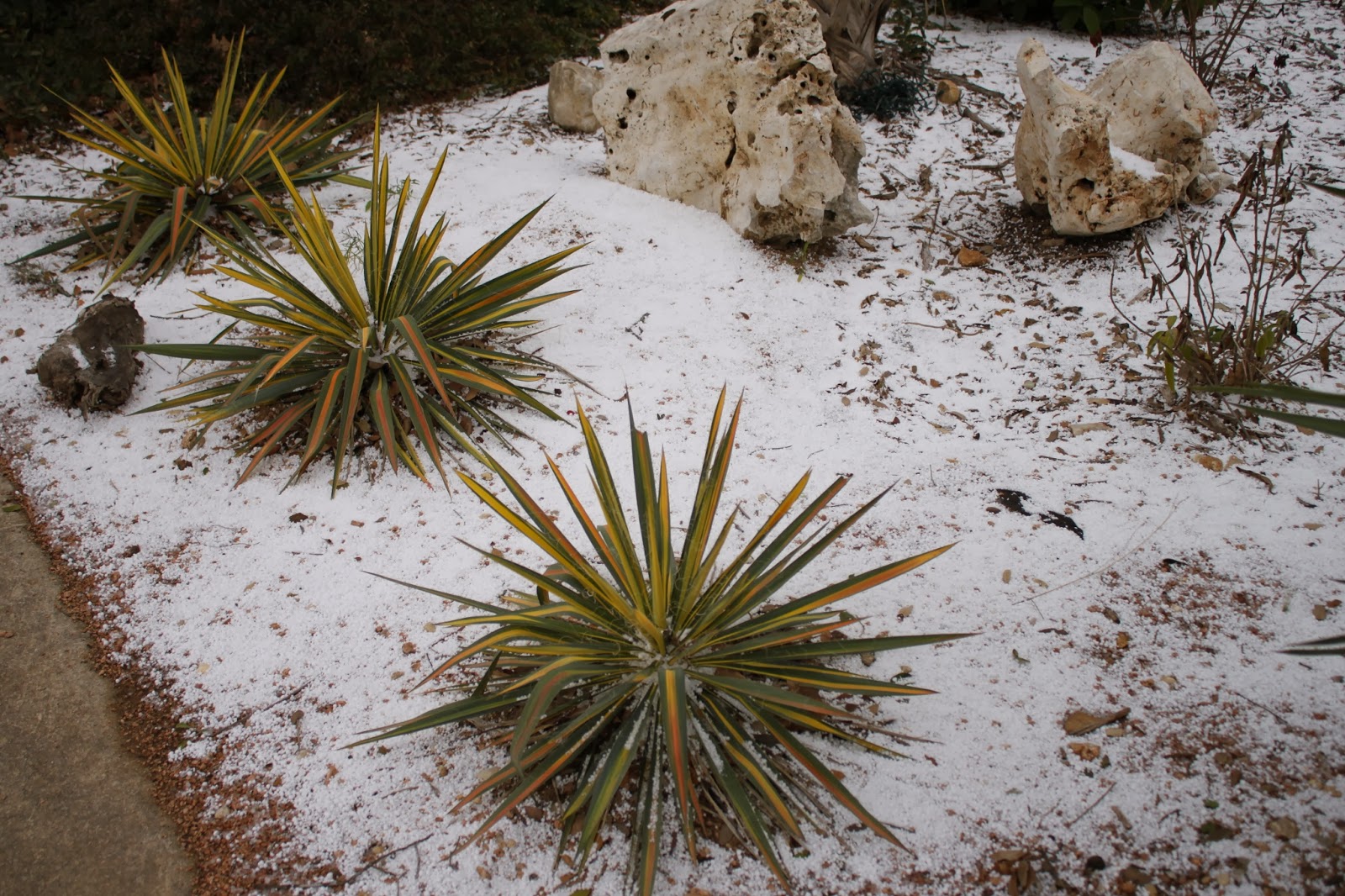 Nothing seems to bother these plants which I saw growing quite well in Zone 7 Virginia during our trip there last fall. 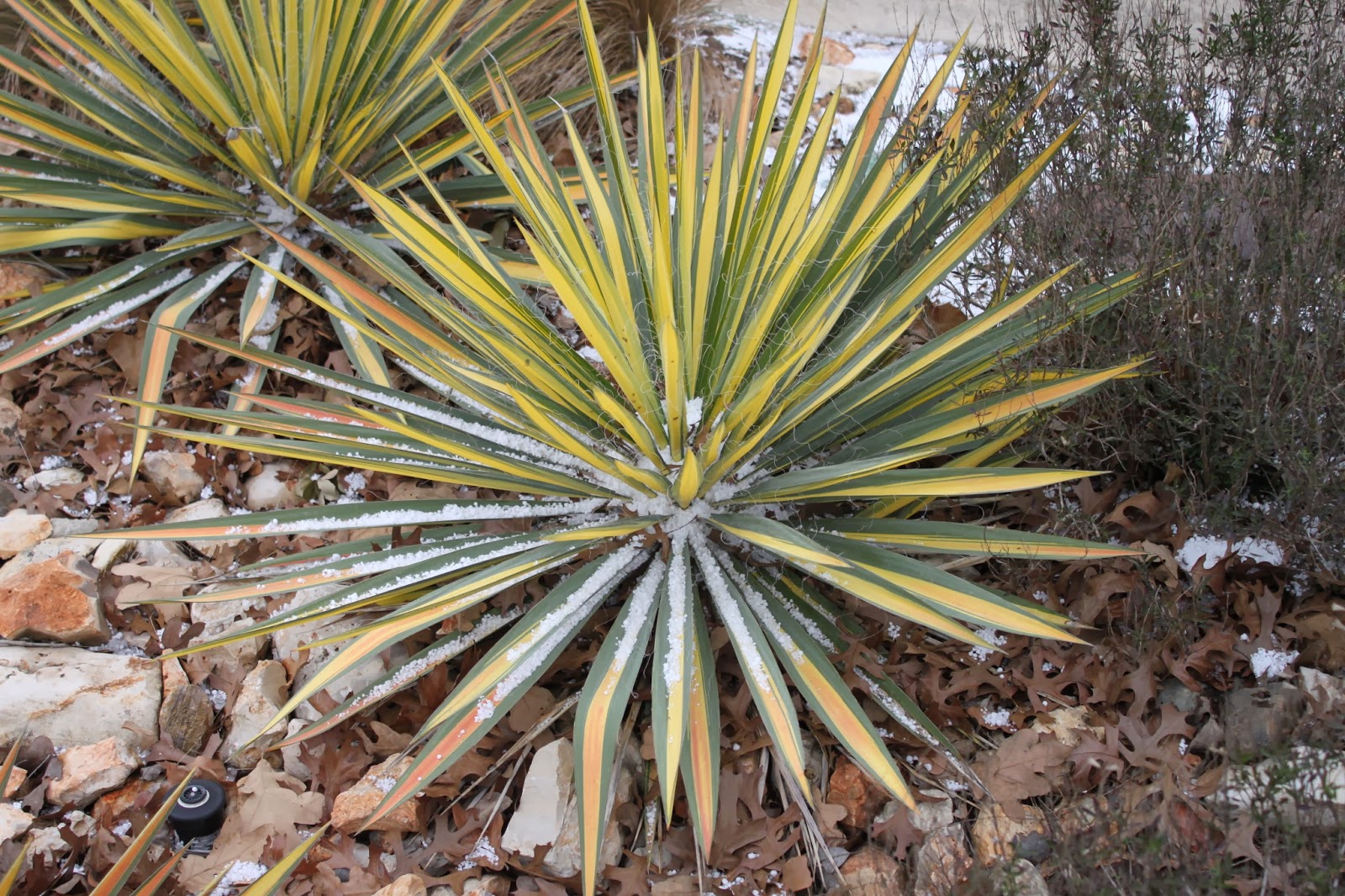 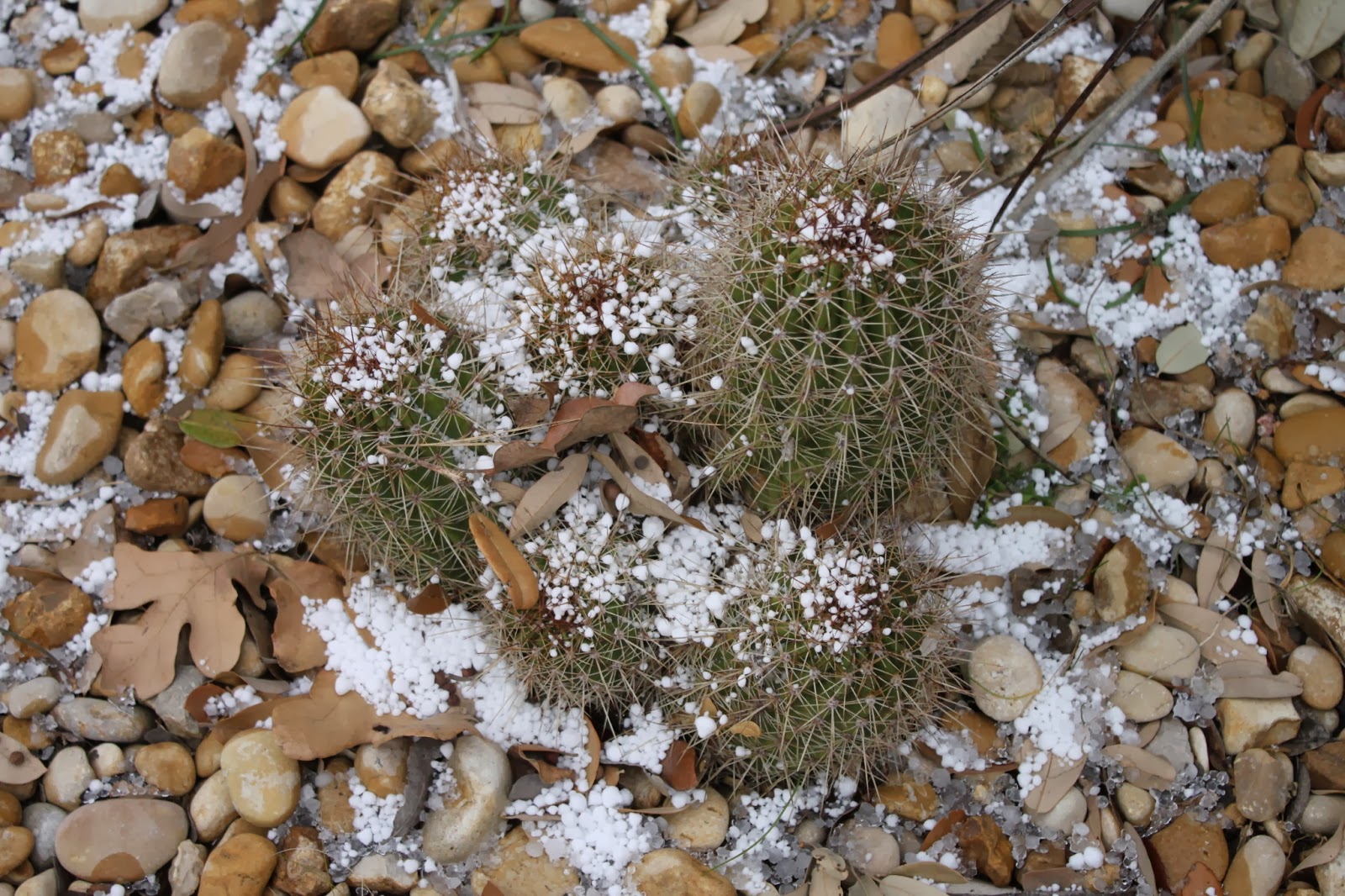 So far the golden barrels are holding up well. 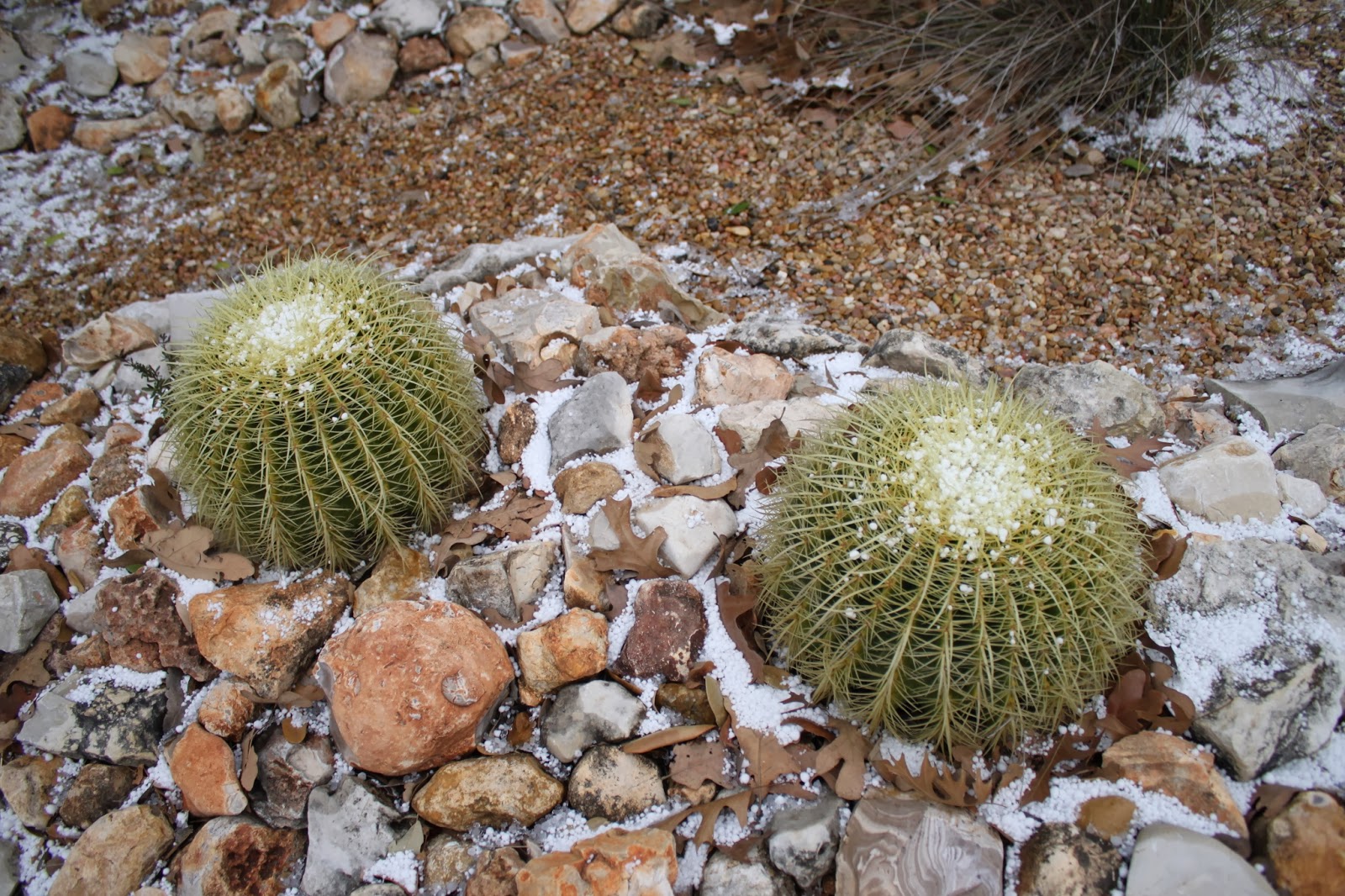 The big sago may have some fronds burned but should be fine. 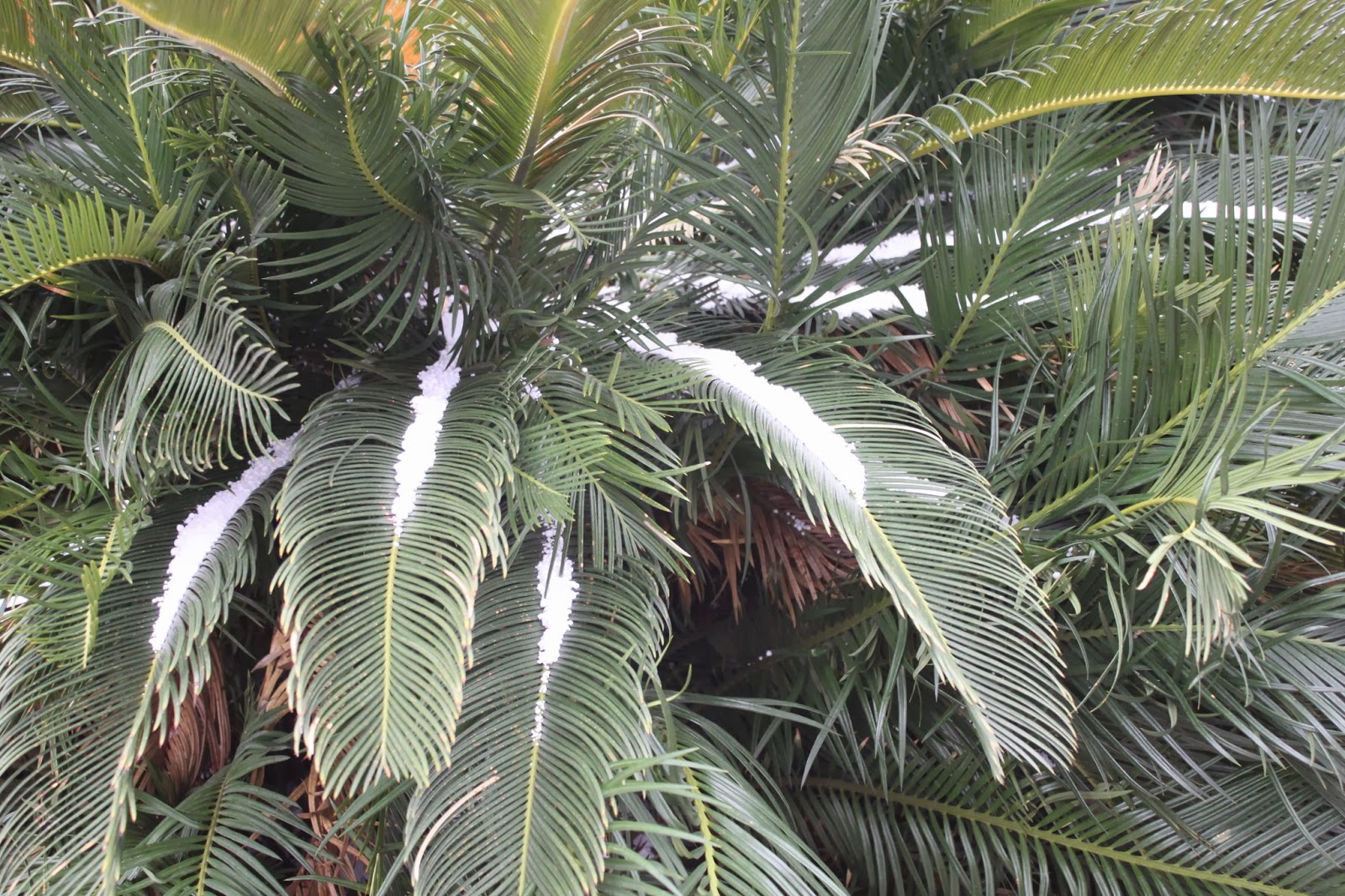 I didn't cover the False Agave 'Flamingo Glow' because they can take a light freeze and we'll see now what a light freeze means to them.  This looks pretty cold.  The Agave angustifolia on the right succumbed to our 20F low a few weeks ago. 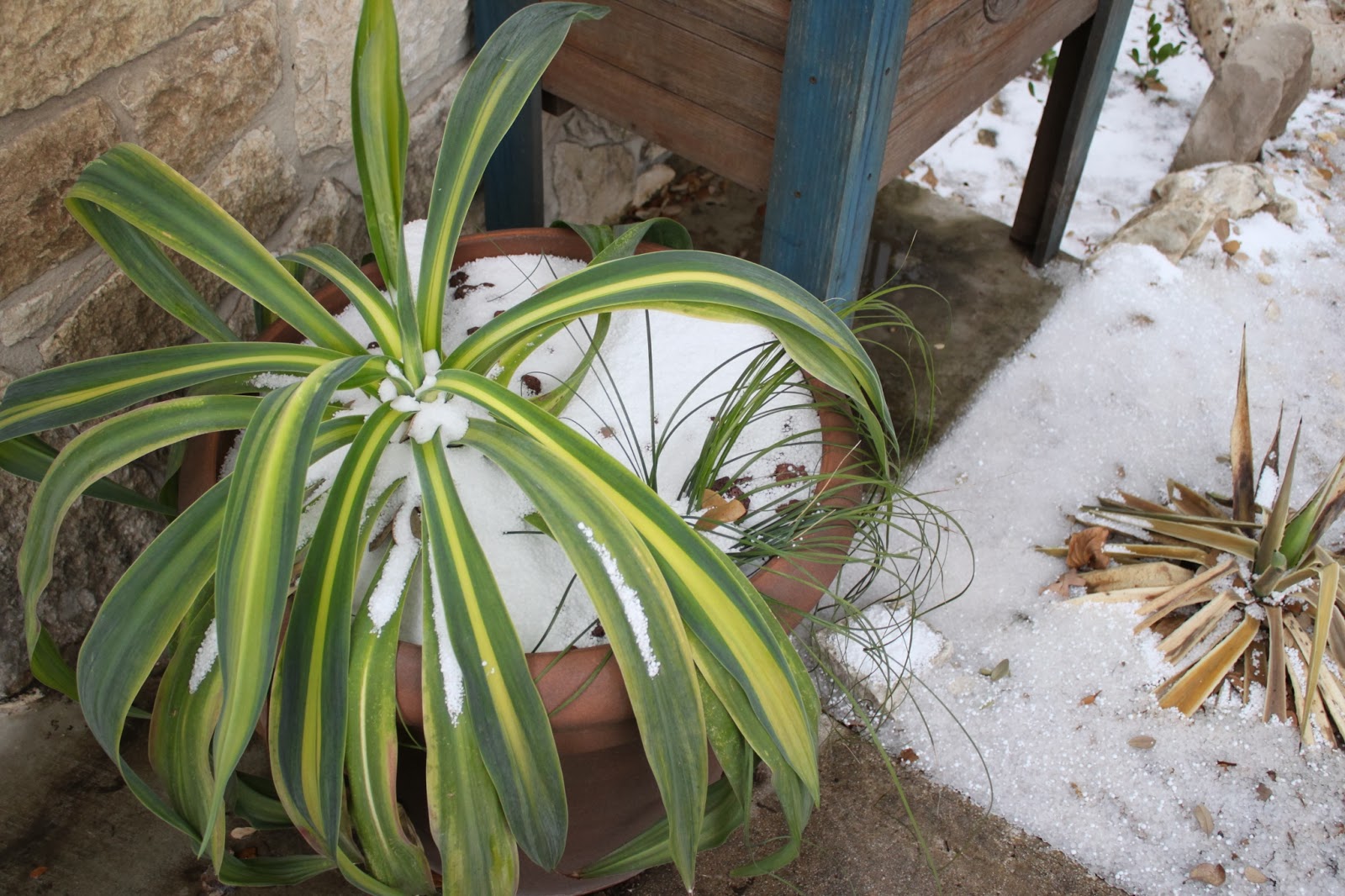 Ornamental grasses holding their own in the circle garden.  The Pine Muhly is still somewhat green. 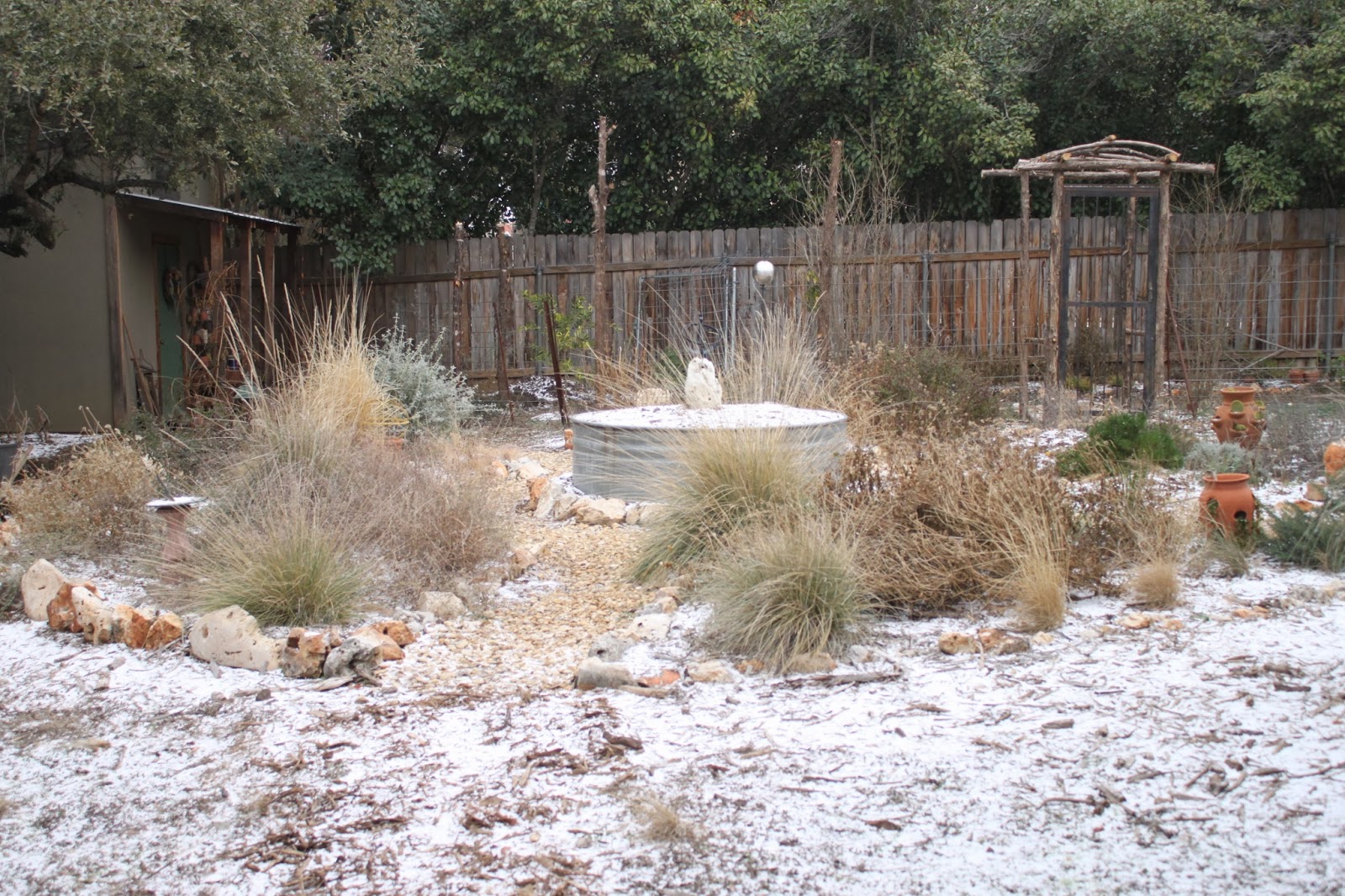 I won't be relaxing in the corner as I did on Tuesday when it was 70F.  This was not our biggest temperature differential this year, we had a whopping 53 degree drop in early January in less than 36 hours. 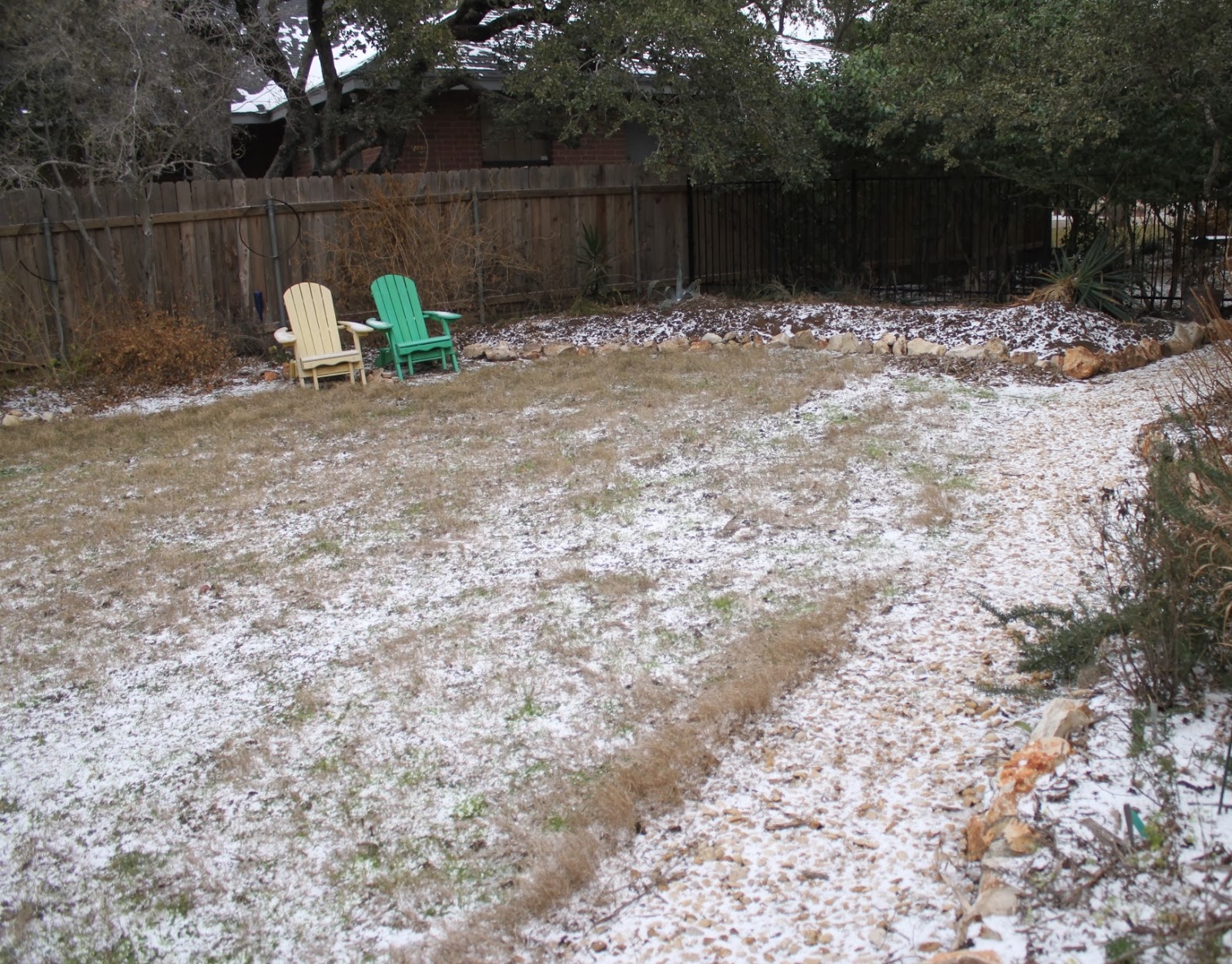 Lots of dead foliage in the side yard.  Some of these will grow back and others will be replaced with hardier plants. 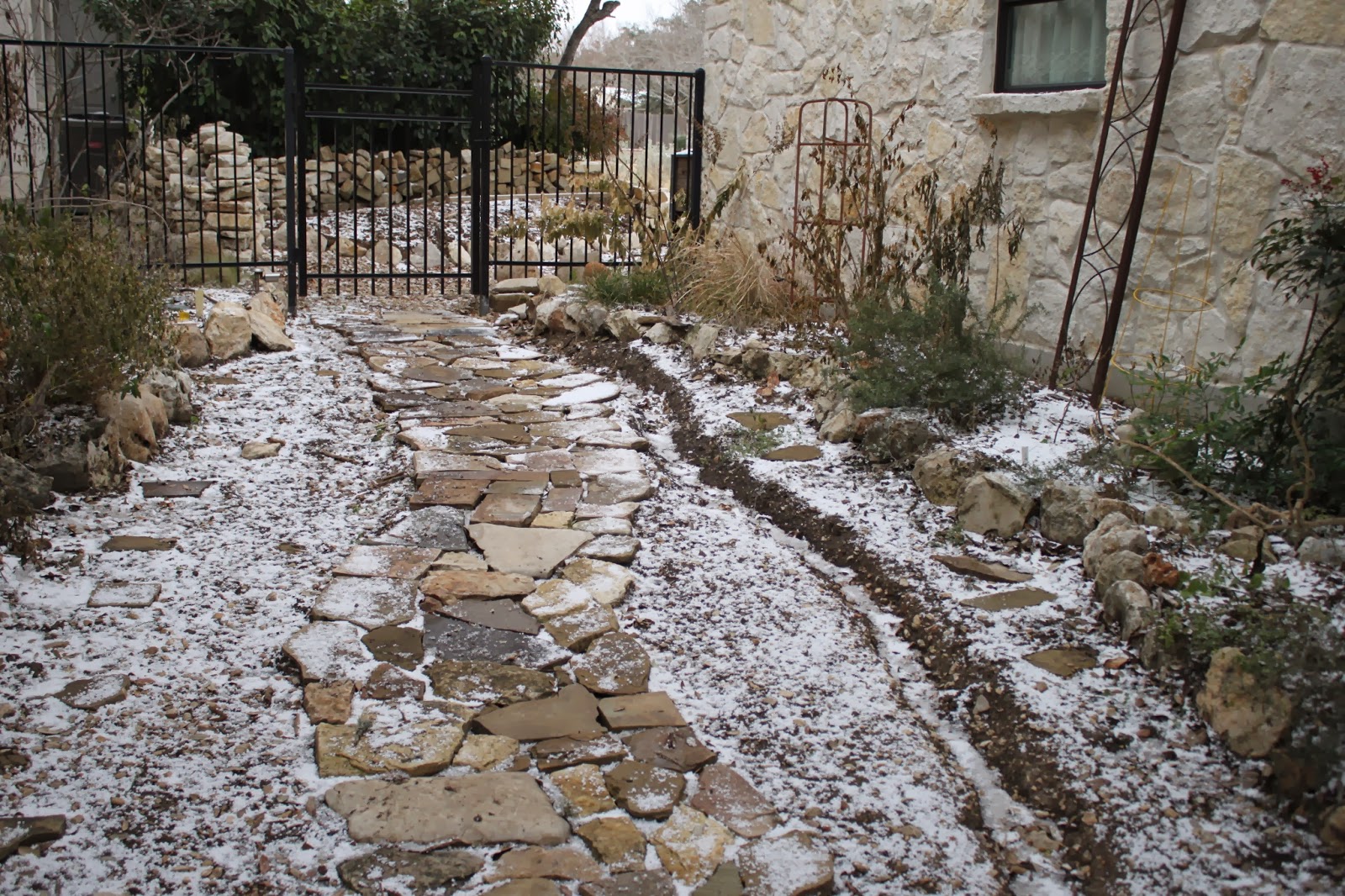 It's mid afternoon as I post this and still below freezing so the ice remains.  We might not get above freezing at all today.

There's going to be plenty of room for new plants this year.  Goods news, bad news.  Overall the gardens have fared well, but this winter certainly provides a renewed respect for Native Texas plants.
Posted by Shirley Fox at 2:32 PM