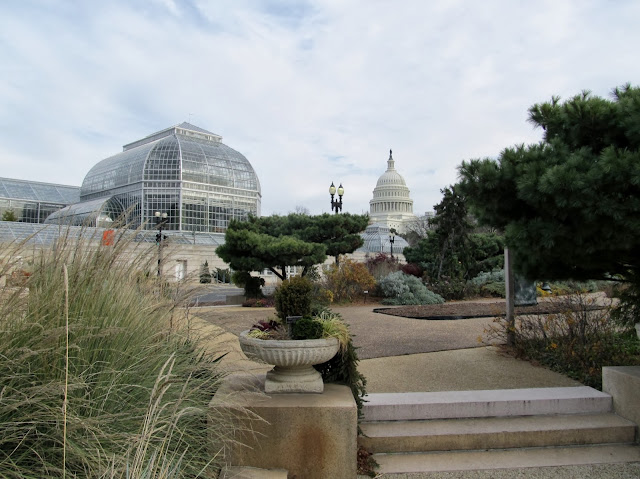 The Bartholdi Park is named for the Bartholdi Fountain placed there.  Frederic Auguste Bartholdi is best known as the designer of the Statue of Liberty.  Definitely the resemblance shows in this work.  The fountain is lighted at night and the water is turned off during the winter. 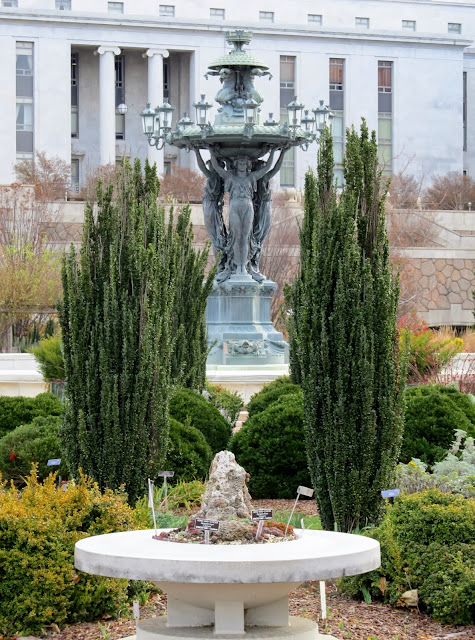 If you are a fan of the original Victory Garden PBS series you will remember Holly Shimizu who was one of the hosts on the show.  She is the Executive Director of the U.S. Botanic Garden which oversees the Bartholdi Park gardens.  With that background it's no surprise that these gardens were designed as demonstration gardens for homeowners.  They also serve as a "backyard garden" for residents of the Capitol Hill neighborhood who often have little or no garden space. 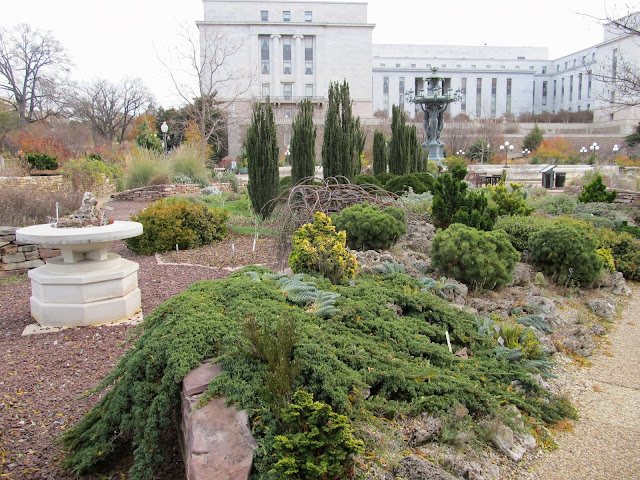 The Rayburn House Office Building is in the background. 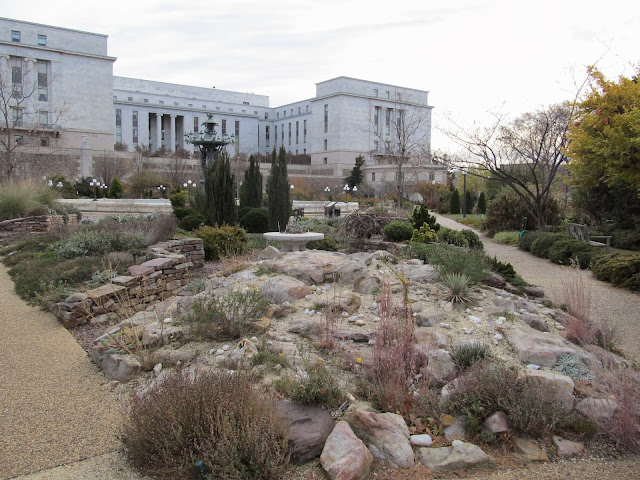 One section is devoted to a large rock garden. 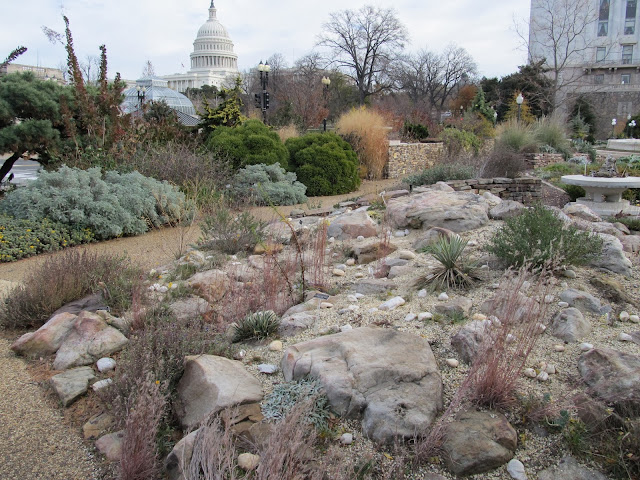 Details worth noting in the rock garden include the placement of rocks and groundcover. 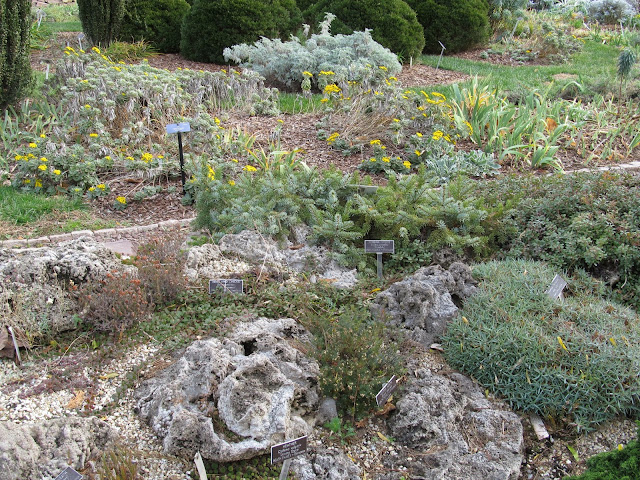 Benches for relaxing and there are also a few wood rockers placed in the garden. 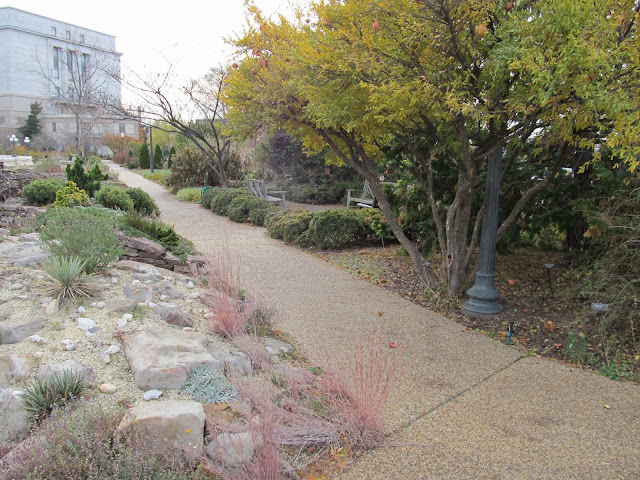 Four-nerve Daisy braving the cold.  I grow this and it blooms most of the winter.  It was very cold while we were touring these gardens so I found it interesting to see many of the same plants I grow in my much warmer climate.  What is very cold?  Less than 20F or -7C at around 10 am. 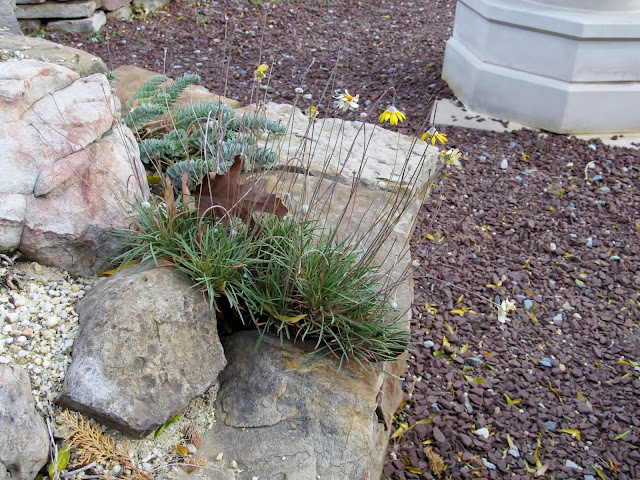 Plenty of evergreens for winter structure. 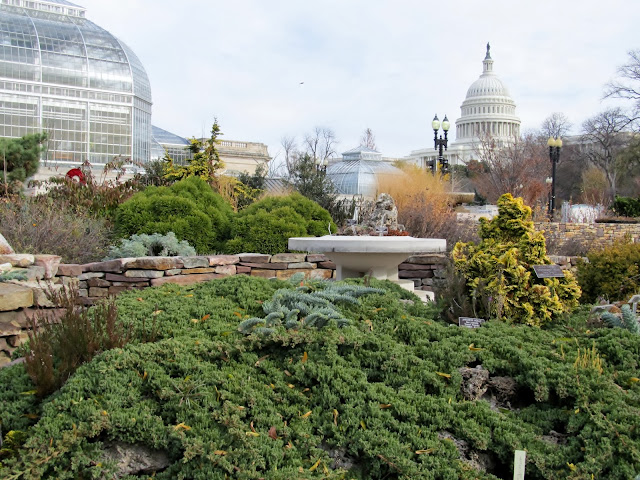 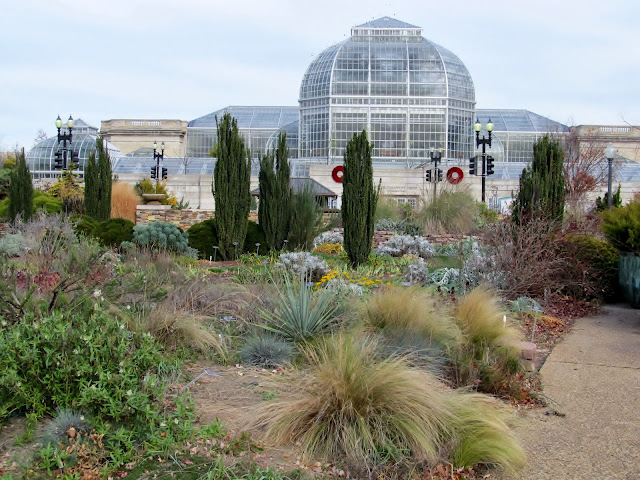 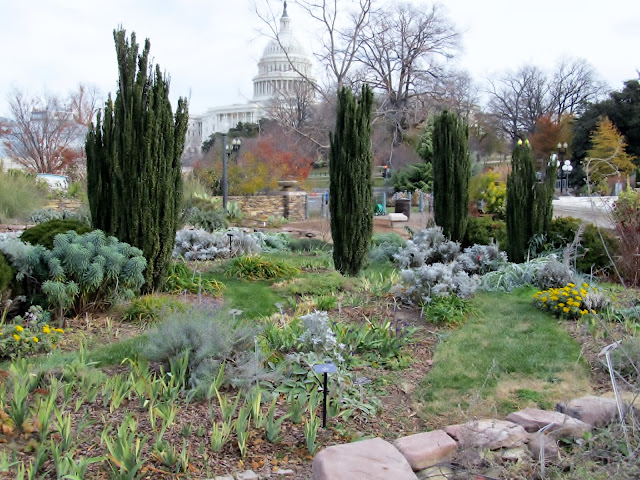 This garden is on a small triangle esplanade bounded by busy streets. 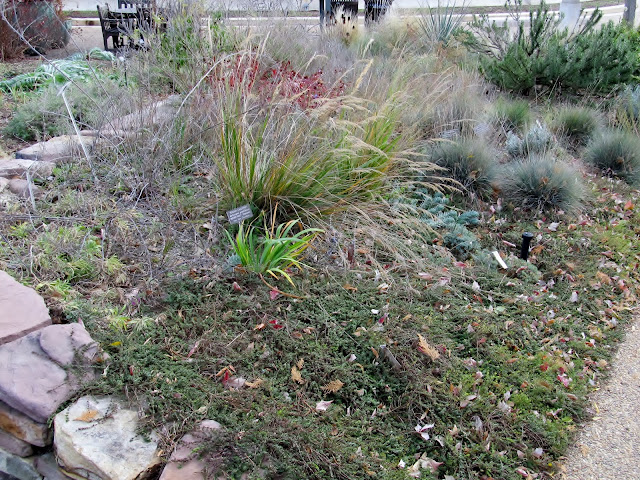 Wonderful miniature garden of hardy succulents on a pedestal create a destination in the center. 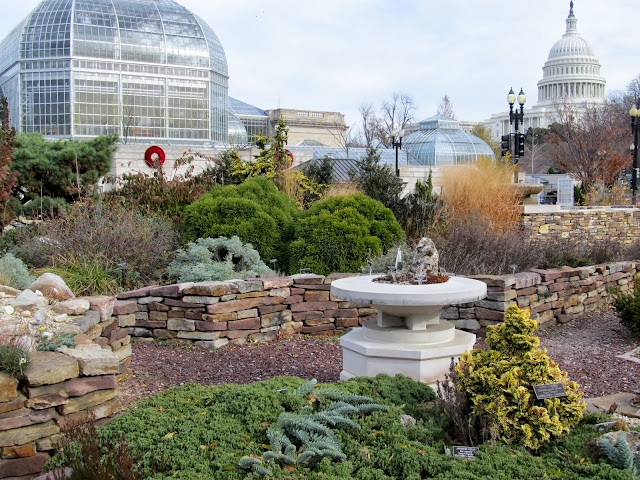 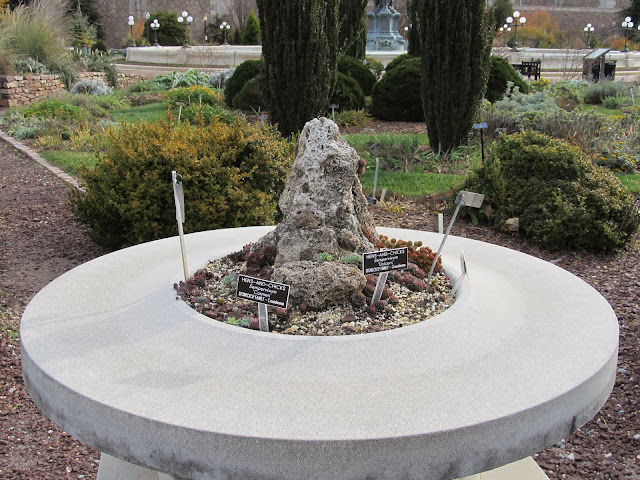 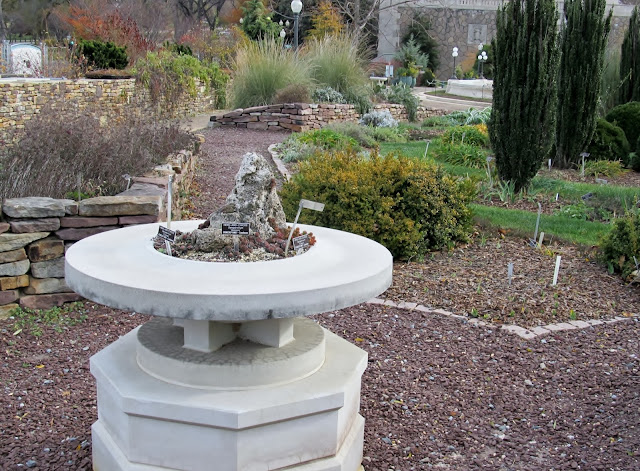 All but one container planting holding on despite the cold. 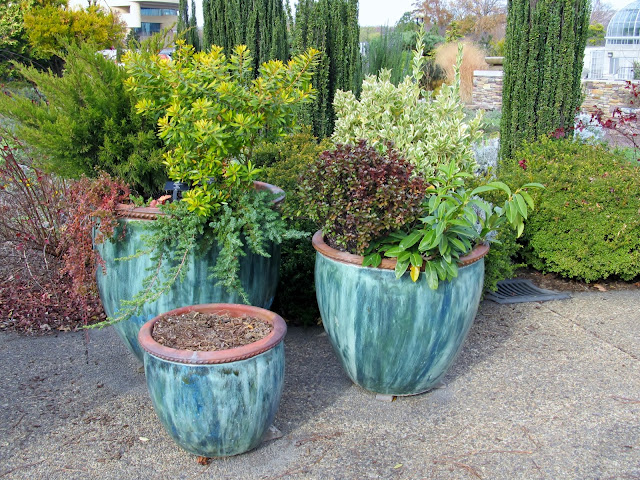 Some plants are just as surprised as the rest of us at the early onset of freezing weather. 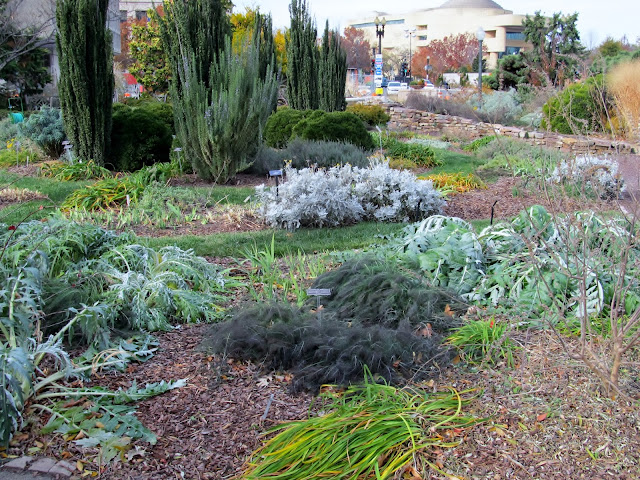 A little formality in the boxwood circle 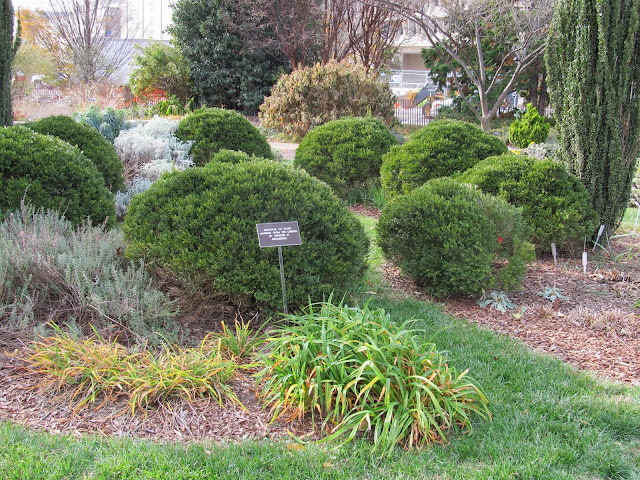 Green and silver, I have that one covered pretty well in my own garden. 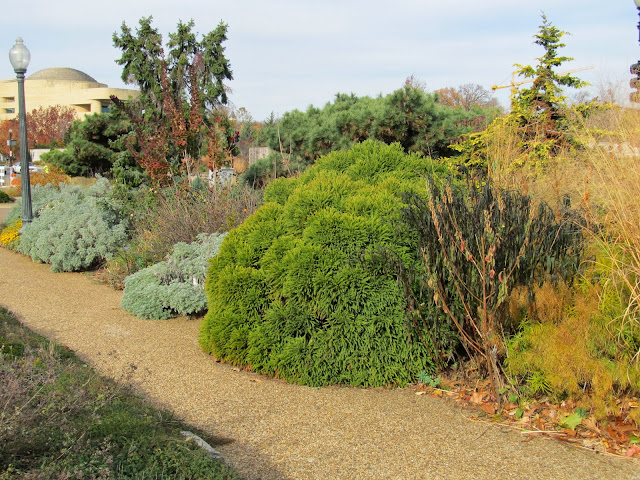 Weeping Japanese Maple still holding on to its leaves 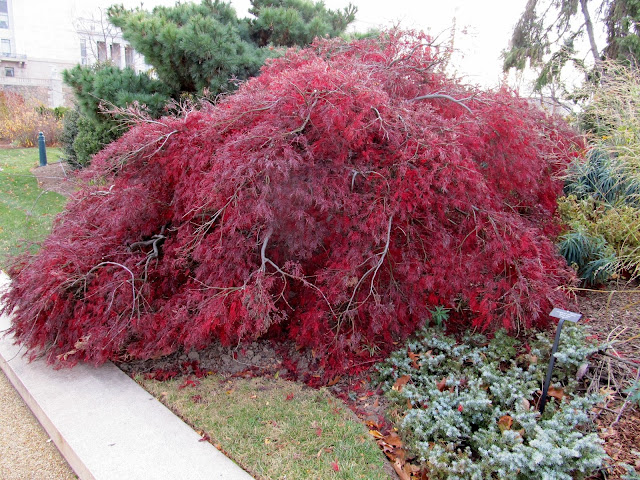 This one must be in a colder or windier spot. 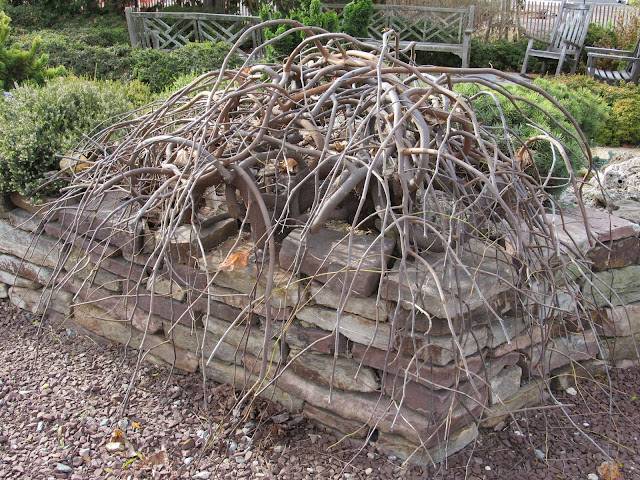 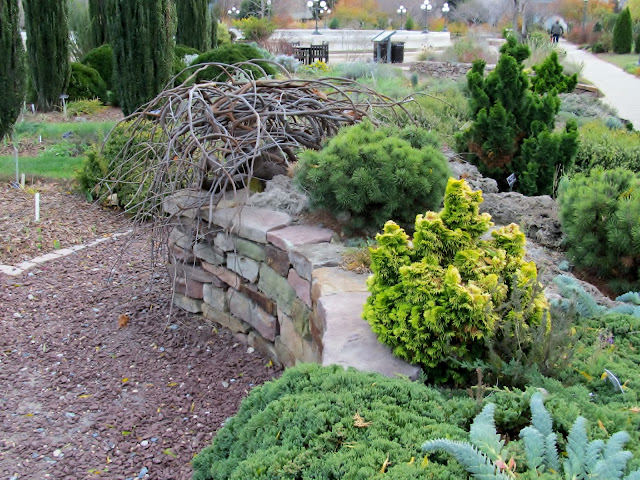 A very hardy pomegranate tree, I think this was 'Wonderful' and the same one I grow in my own yard. 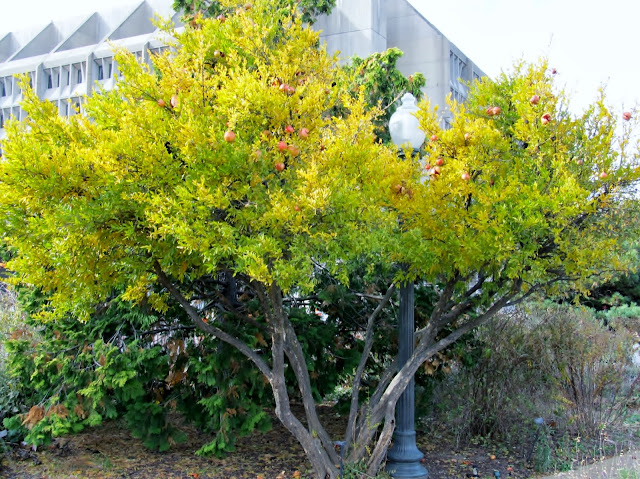 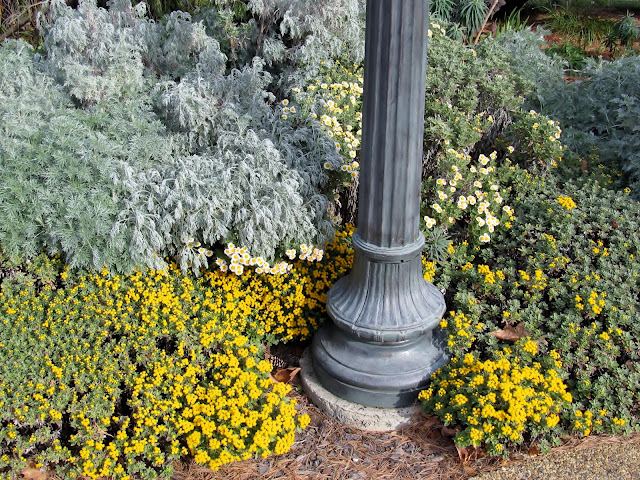 I don't remember this one but it was covered with tiny blue flowers even while the foliage was turning red. 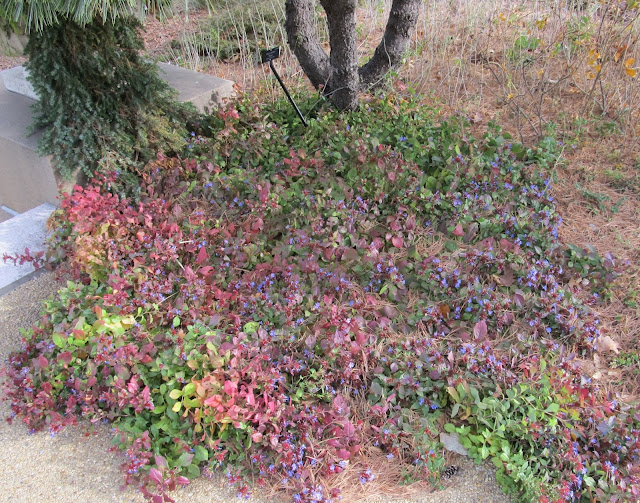 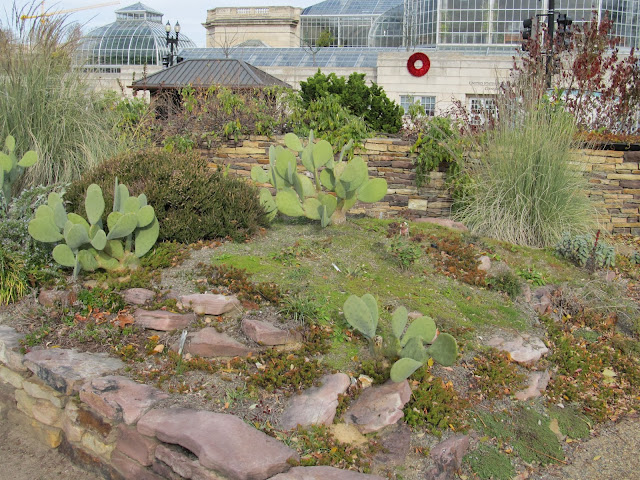 I could never keep rosemary growing through the winter when we lived here--it doesn't like being covered with ice and snow.  They must replace it most years. 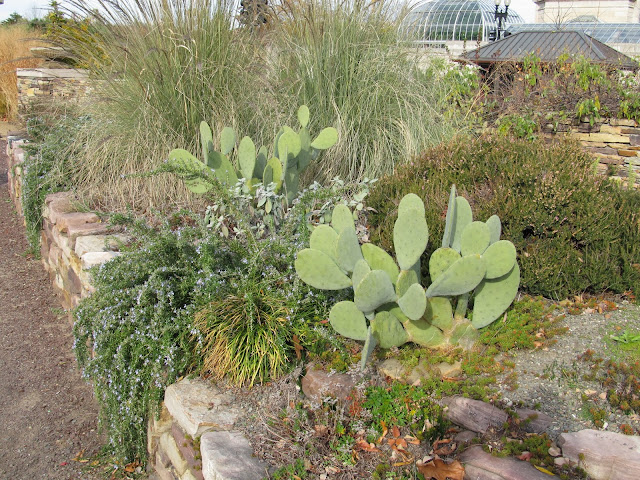 To quote Loree at Danger Garden, "there's always an agave".  You just have to look for it. 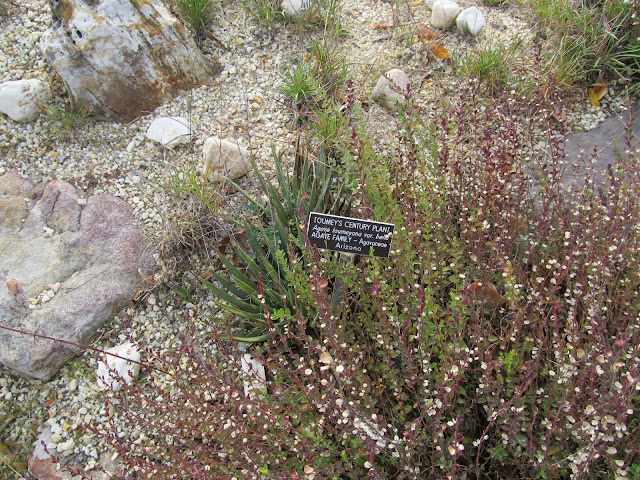 Next we'll finish our walk across Capitol Hill to Union Station and explore some of the neighborhood around our hotel.
Posted by Shirley Fox at 8:40 PM