Did you ever really want a certain big ticket plant?   I did, but I realized it's important to wait for the right moment.  It takes extensive preparation to ensure a feature plant is located in the proper spot (since you only get one chance to get it right) so timing is important.   I have wanted a tall yucca for years and have pictured it somewhere in my front yard.  But getting it done took a combination of creating the basic landscape first and also the right circumstances.

This spring we knew the Vitex tree on the front corner by the garage was past its prime.  Planted 20 years ago by the original owners, it had served its time well as a visual anchor at the corner.  But it was never a favorite plant, just a useful one.  Nothing wrong with that and I had so many other landscaping issues to deal with. 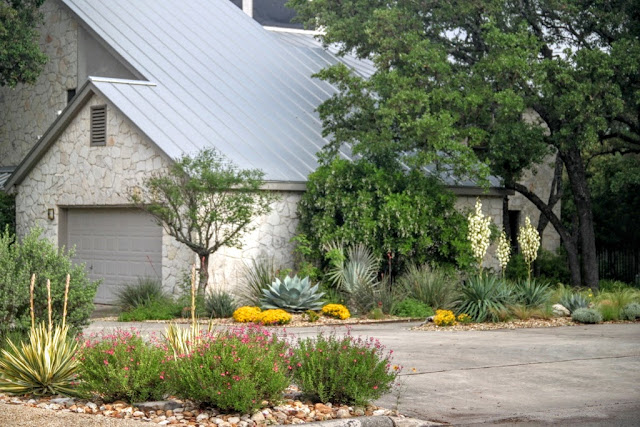 Pruned into treeform it held its own with stunning spring blooms until a few years ago, as shown in this 2010 photo. 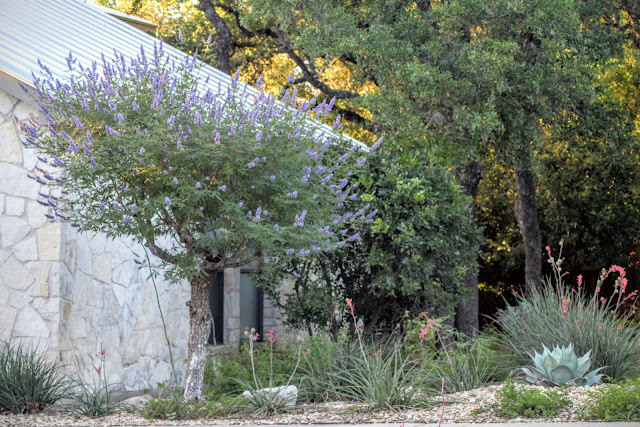 Last spring it was clearly signalling decline by barely blooming at all and summer leaves were sparse and small.  Time to take it out.  Could the circumstances be coming together for my tall yucca? 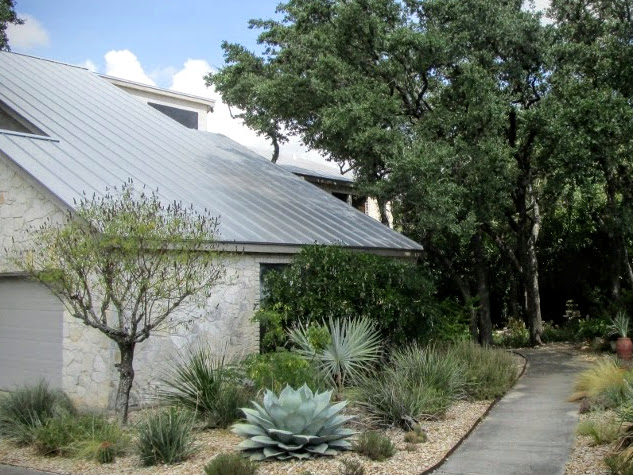 First things first which meant removing the old plant.  We discovered the trunk was hollow.  No wonder it wasn't doing well. 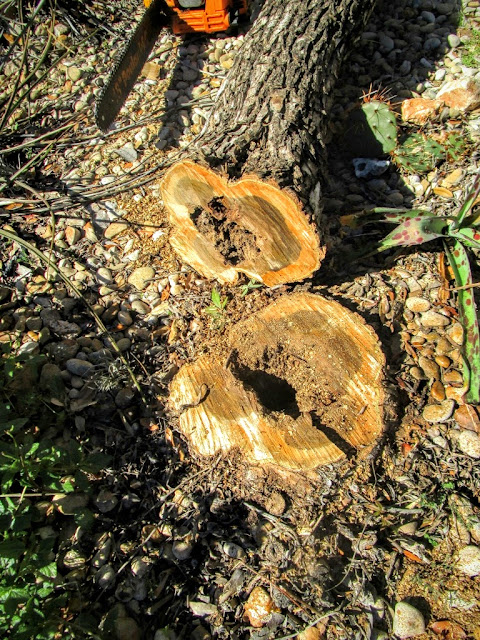 Neal cut it into slices like an Angel food cake and hauled off the remains. 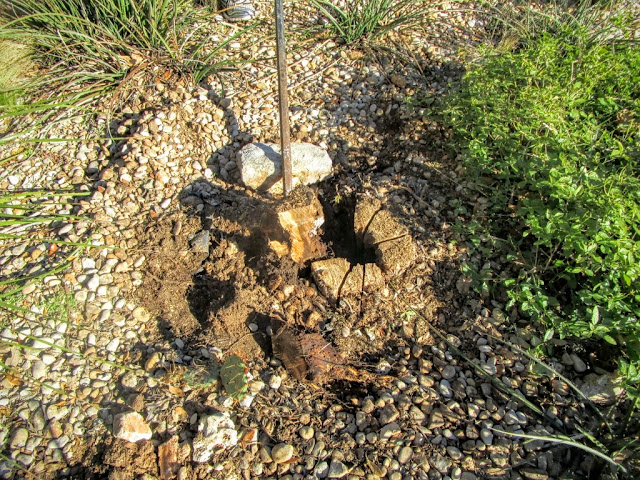 At this point a nest of scorpions ran out of the hole!  But they did not get far.  Are scorpions good fertilizer?  We'll find out. 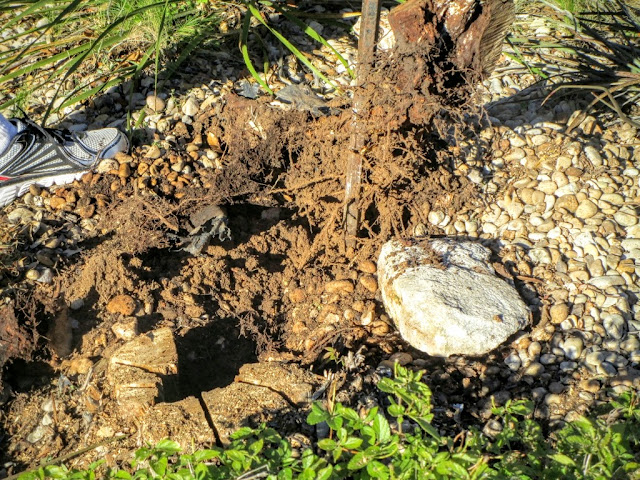 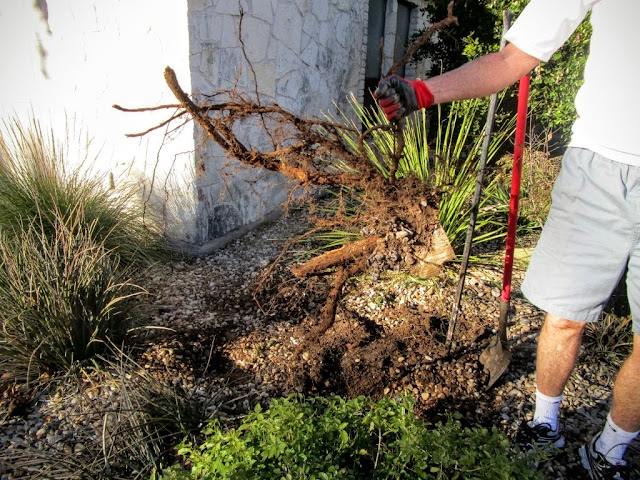 Now what to do with the blank spot?  Of course, I already knew.  With the old Vitex gone it was easy to see my first choice would work well. 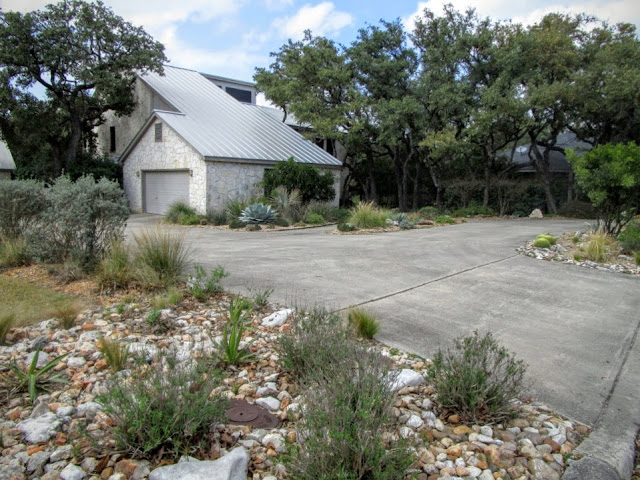 It's the perfect spot and I've been visualizing a tall yucca there for a while so the "Big Yucca Quest" was on.  At first thought, a Yucca rostrata was just the plant.  Except I wanted presence from the start which called for one about six feet tall.  Trying to find a large one available at retail proved to be a challenge and hiring a landscaper to acquire one wholesale would come at a steep price.  Yucca rostrata is a native Texas plant so I searched and made lots of calls.  I found specimens in the 3' to 4' range at a reasonable price from several Rio Grande Valley growers but the shipping made the prices essentially the same as those same sizes available locally.

Finally I found Yucca Rigida or Blue Yucca advertised on Craigslist at wholesale prices.  Calling the number revealed the seller was highly reputable grower Barton Springs Nursery in Austin.  For a while I was still on the fence about giving up on Yucca rostrata.  After more consideration and spotting a few striking silvery Yucca rigida around town, I decided its longer, thicker leaves would look more sculptural.  Still, we were limited to the 7' overall length we could fit inside our mid-sized SUV and that included about 2' of root ball leaving me with just 5' or less of yucca.  Then I just happened to mention my predicament to my friend Linda and she offered to take her truck.  Yay!  Linda and I were off on a roadtrip to Austin for the pickup.  Oh, and we decided to purchase two!  The BSN crew had already dug, wrapped and cleaned two six foot specimens by the time we arrived. 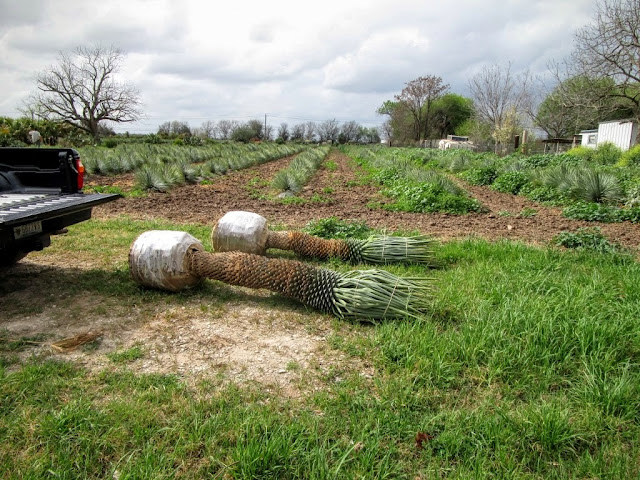 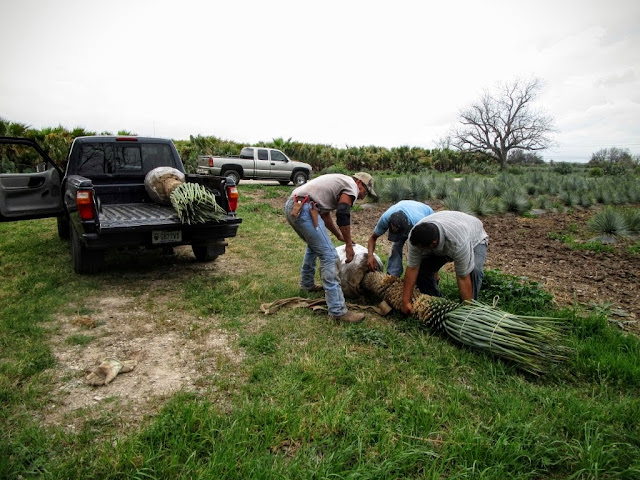 Here we are unloading back at home with help from our awesome neighbor Mike.  The hole was already prepared in advance with a combination of sandy soil and small gravel. 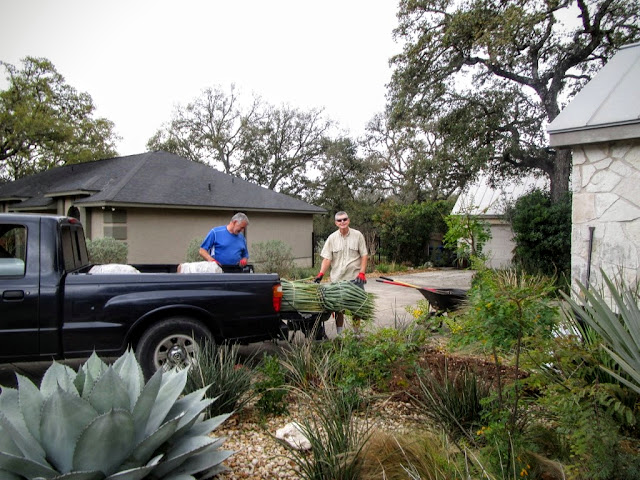 That's Linda in the background by the truck.  These weighed about 250 pounds each, so they were not exactly an easy install. 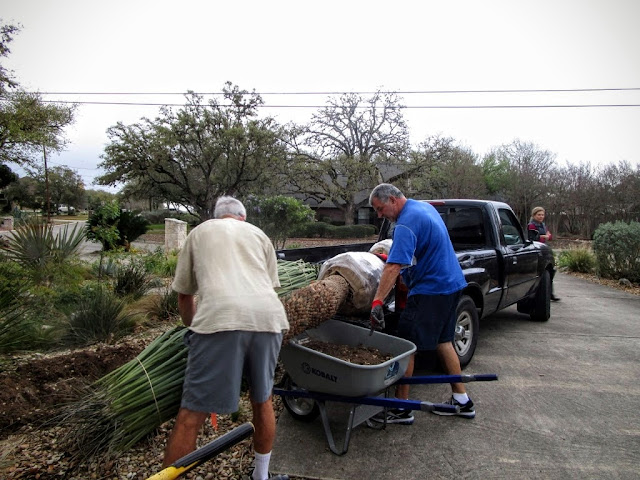 Here's the first six-foot beauty in place by the garage.  The yucca leaves will relax over time to show off their silvery side and pick up the agave color. 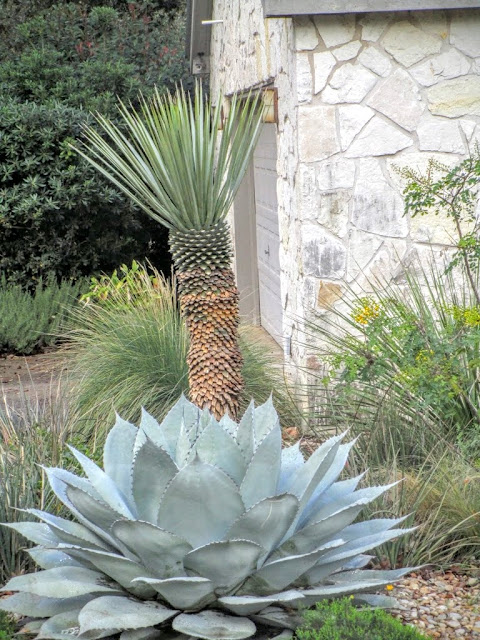 A longer view from the driveway.  Those spiky leaves work well with the house style. 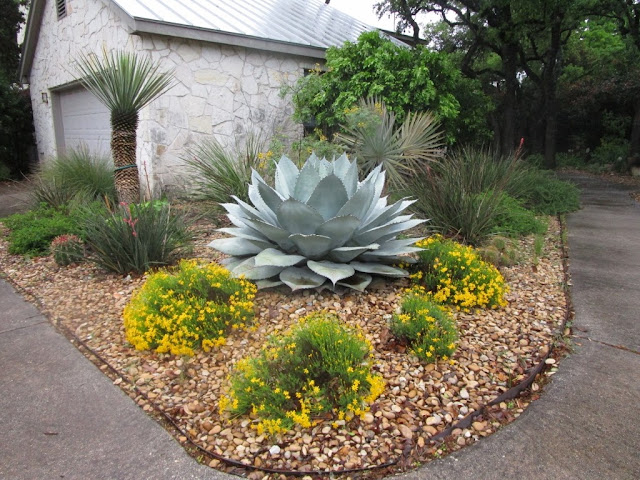 Yucca number two went into the back corner where a significant focal presence has been needed for some time. 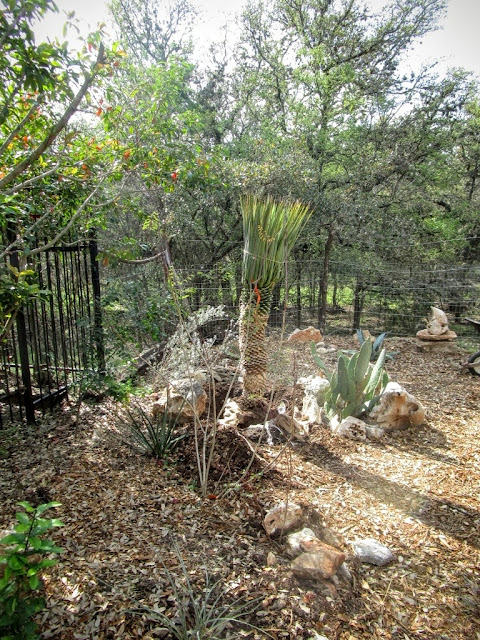 A before and after look.  Before: April 2015 with declining Vitex in place. 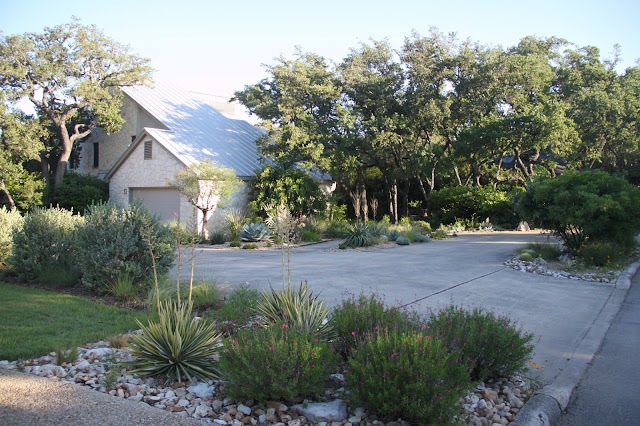 After: A clean, sculptural look works in well with the rest of our landscape.  Just as I visualized. 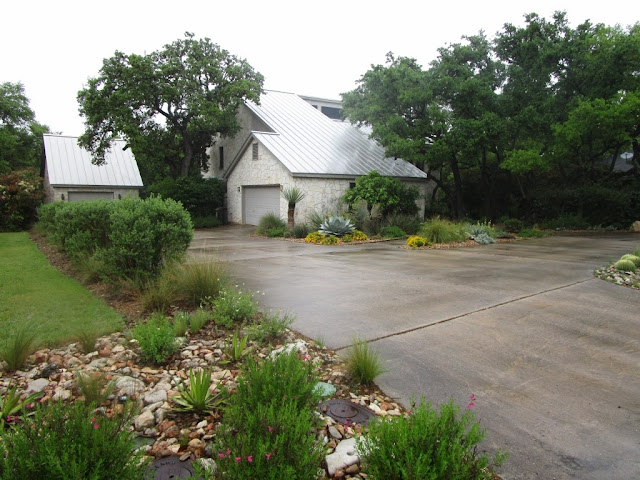 My "Big Yucca Quest" was quite an adventure and I'm so excited to have a great structural plant in place and it was a bonus to also get one for the back yard.
Posted by Shirley Fox at 1:52 PM