Our U.S. National Park Service is turning 100 this week and this third post in my series on the San Antonio missions is in honor of that event.  According to their special centennial website:  "We invite you to find your park and discover the national parks and programs in your own backyard!"

I'm taking up their challenge since sharing the beautiful sights of San Antonio is one of my favorite blog activities.  What better way to celebrate than to take their advice and visit my nearest national park.  The San Antonio Missions National Historical Park comprises four Spanish missions established along the San Antonio River in the early 18th Century.  The fifth mission, The Alamo, is managed by the State of Texas and is not part of the national park.  Mission San José south of town along Mission Road is the mission we're visiting today. 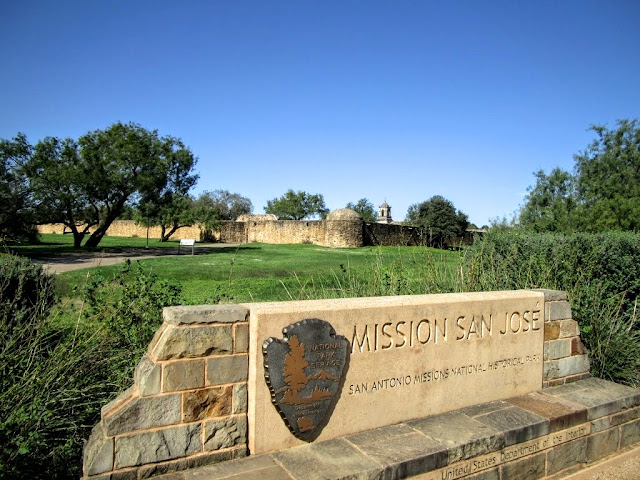 Completed in 1782, Mission San Jose is the largest and most romantic of the four missions. 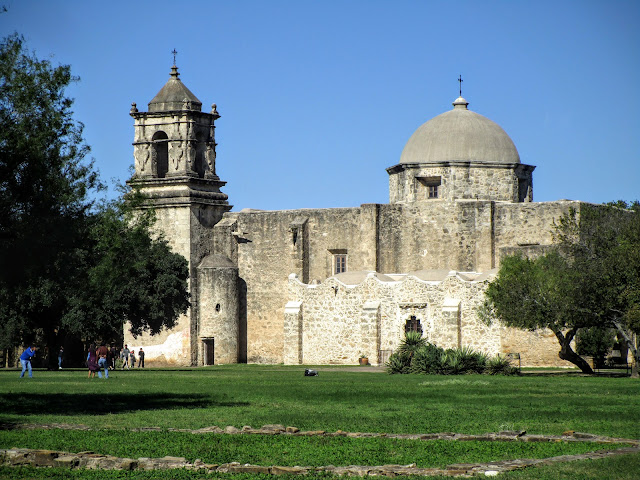 San Antonio is a romantic city with our tree-shaded River Walk and the rose window fits right in with our beautiful city.  Completed in 1775 La Ventana de Rosa is considered the finest example of Baroque carving in North America, the window has been beautifully preserved on a stone wall at the mission.   The story of the window remains a mystery since there are no records on who carved the window or why.  All this mystery lends itself to several romantic versions of the story. 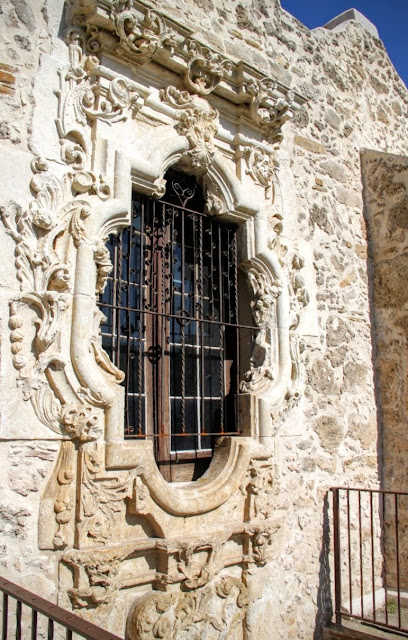 Today an iron fence and a deep window well keep vandals at bay.  The window was carved from soft white limestone brought from farther north along the San Antonio river while most of the church was built with locally available darker stone.  Differences with surrounding architecture makes the window appear to have been added after the church was built even though it was completed about six years earlier. 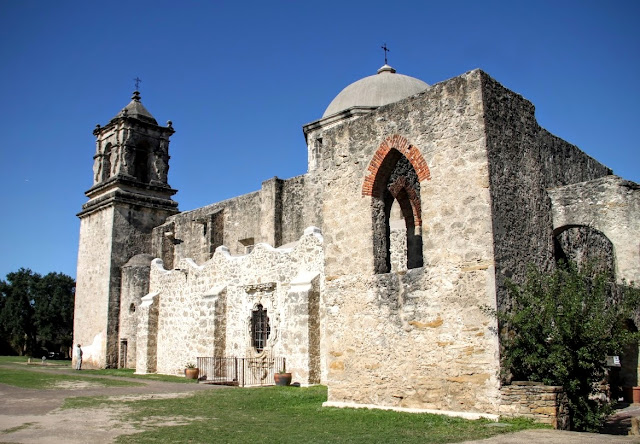 One tower was never completed. 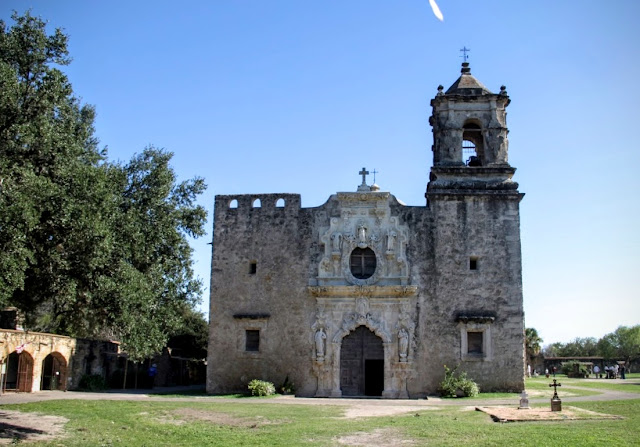 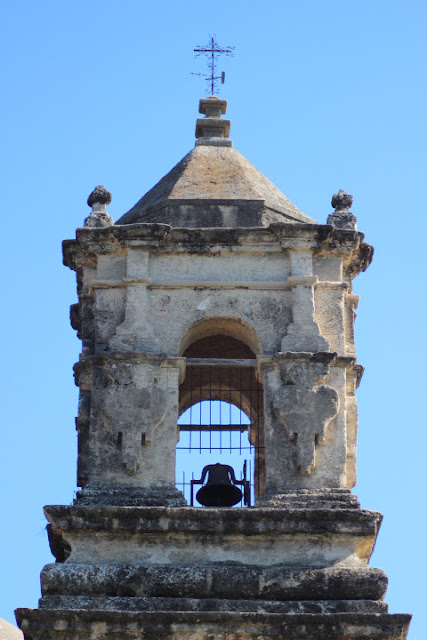 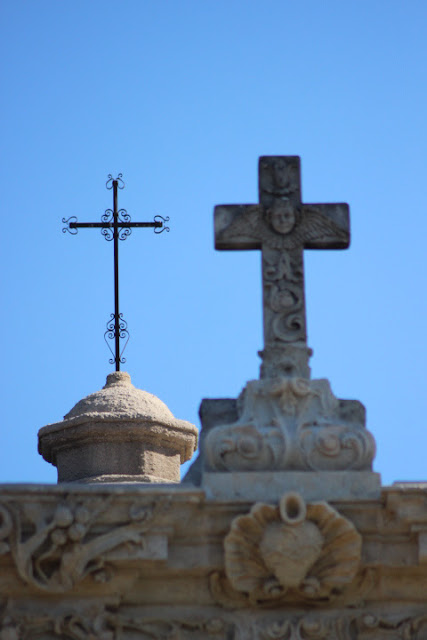 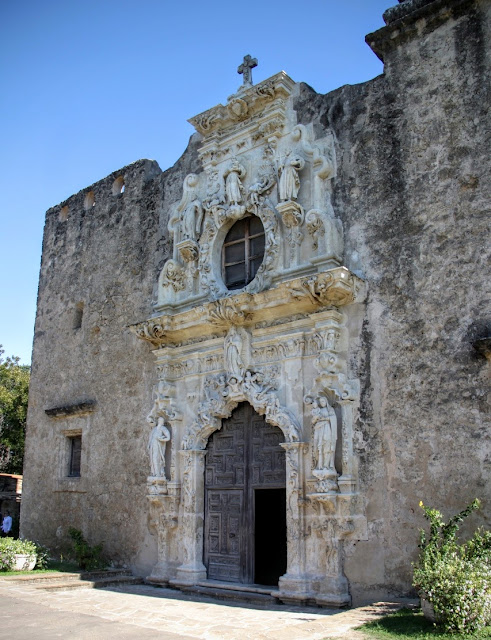 Intricate carvings up close.  Some pieces have been restored using old tools. 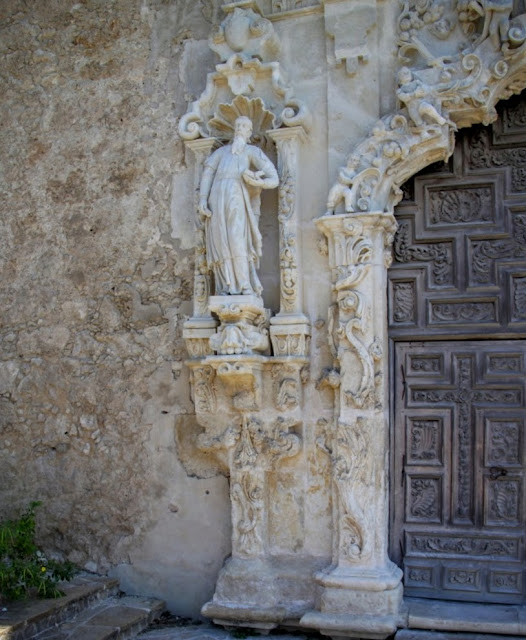 Inside the most elaborate of the mission church interiors.  The church is still an active parish which is responsible for maintenance of the structure and interior of the church.  The frescoes were restored about 15 years ago. 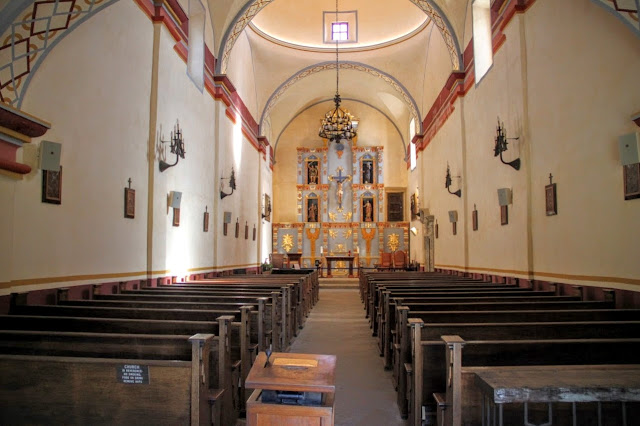 The two story convento housed priests, missionaries, and travelers on the second floor while the lower level contained storage and work rooms. 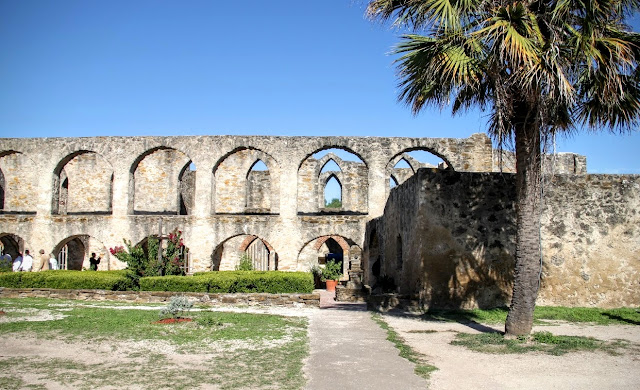 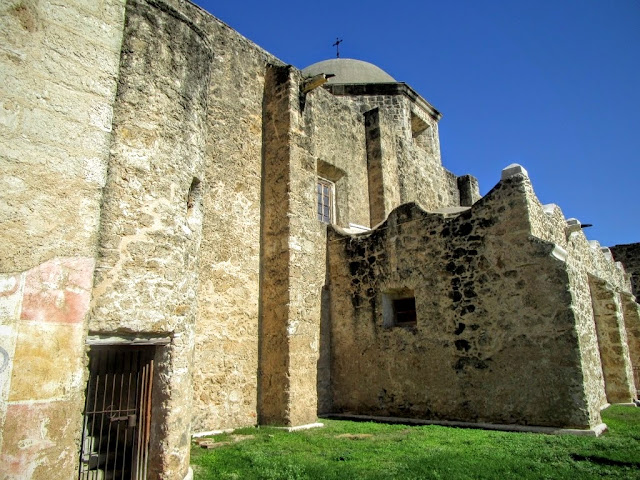 Originally stone exterior surfaces were covered with plaster frescoes like this remnant shown below.  On September 9th of this year, patterns will be projected in light on the front of the church as part of the World Heritage Festival. 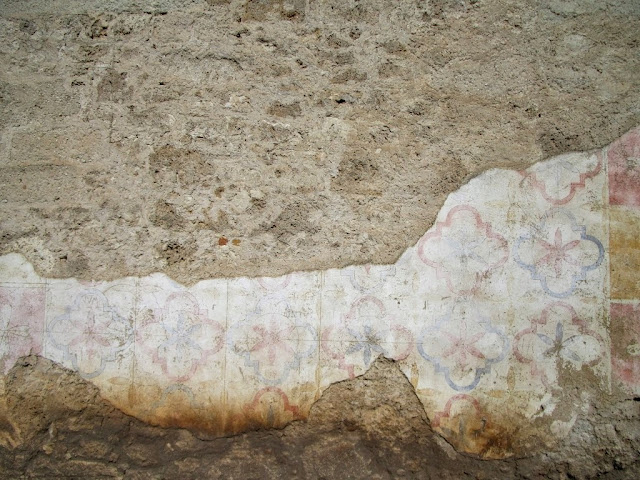 Brick used to shore up a restoration of the bell tower. 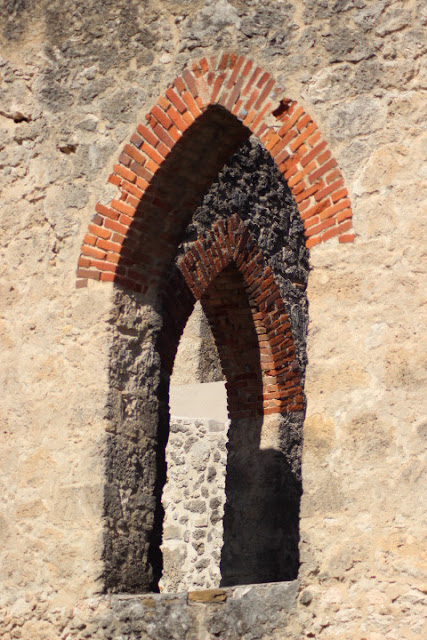 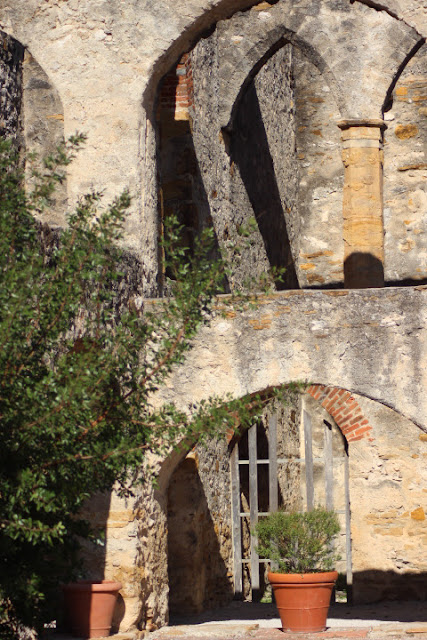 You might have noticed a gathering on the left above and near the center of the convento below. 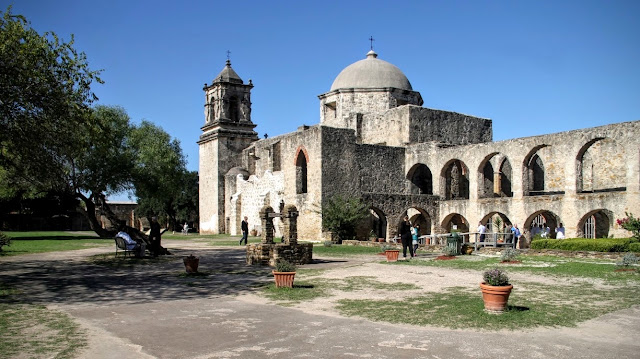 A wedding reception was in progress at this active parish church and the bride, taking a break from her guests, posed among the massive stone walls surrounding the mission on a very windy day.  I've visited many of our national parks and, while I'm sure there are weddings and other events held there, it's rare to find buildings in those parks still being used for their original purposes.

Spanish missions in the new world flew the Cross of Burgundy flag.  Some of the stonework, like this gate, is newer 19th and 20th Century additions. 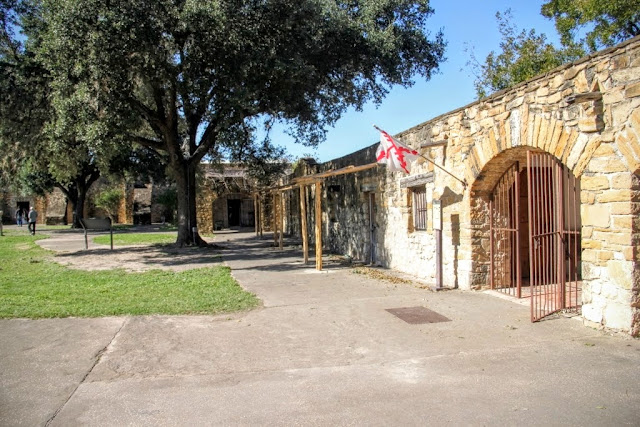 As the missions fell into disuse the original stones were removed by locals for their own buildings and restoration to reflect new uses was necessary.  Enough early stonework remains for a good sense of how the buildings looked in the 1700s. 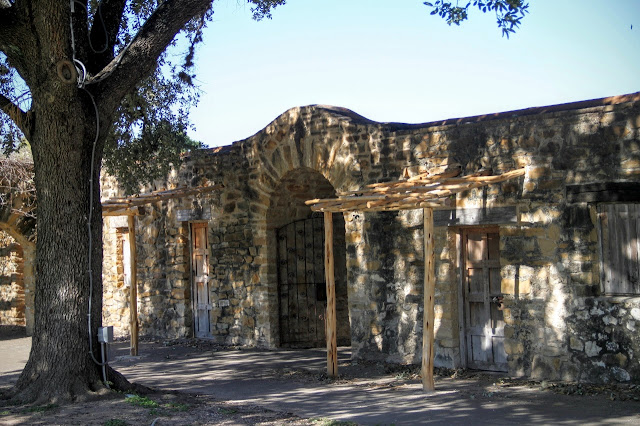 Asphalt sidewalks and glass doors to offices used by the parish are probably not original. 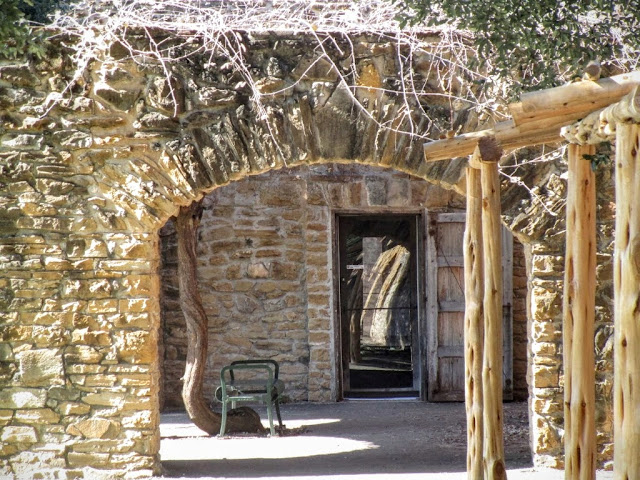 Early Spanish missions were much more than churches as shown by the rows of rooms which housed converts who worked the surrounding farmland.  Some of today's parishoners are descendants of those early converts.  These rooms were rebuilt in the 1920s on the original foundations. 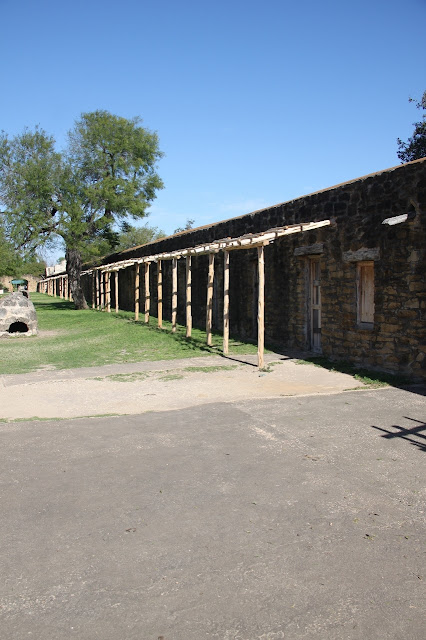 An interior view of one room. 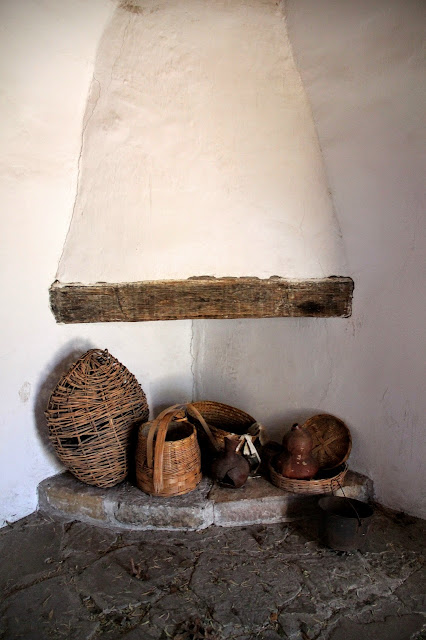 Vigas and latillas ceilings were commonplace back then.  My friend Jeannette slept under ceilings like this in her childhood home and reports that they were prone to dropping debris on you. 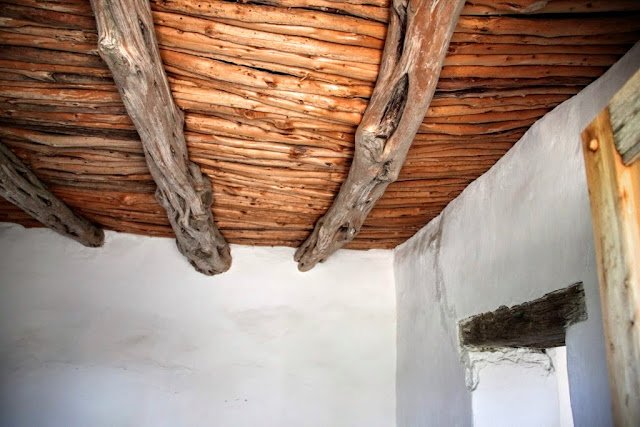 An oven just outside the living quarters. 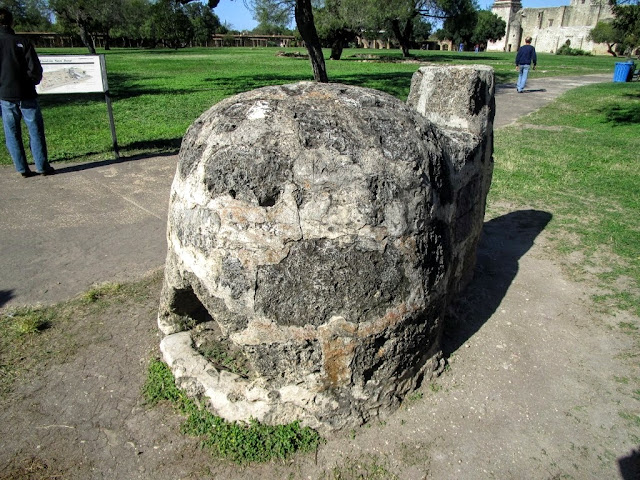 A few of the yuccas in the middle of the courtyard. 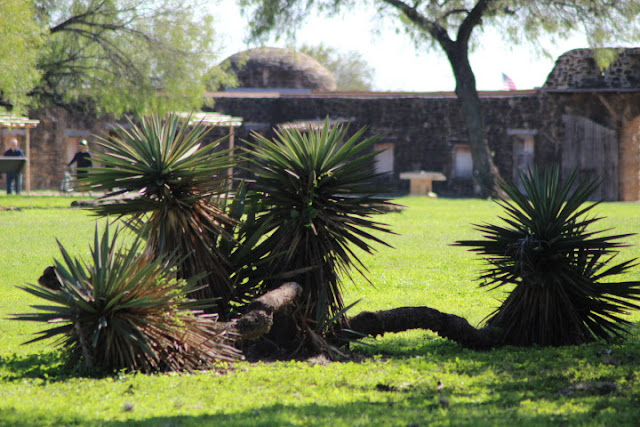 Oddly placed Live Oak probably about 25 years old.  At least it doesn't hide the famous window from the entrance. 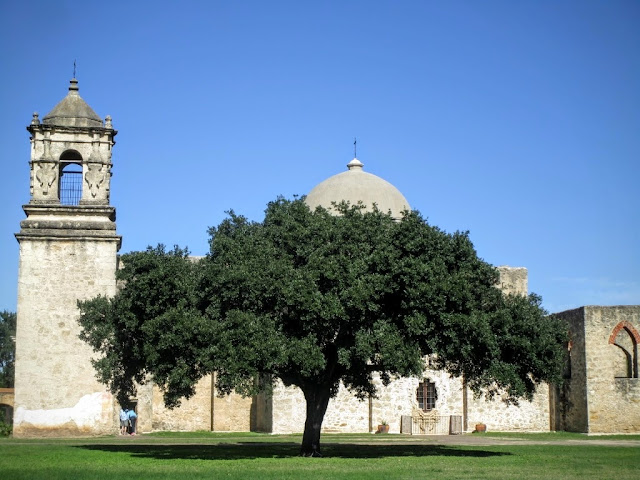 Just over a year ago the San Antonio Missions were designated a World Heritage Site. 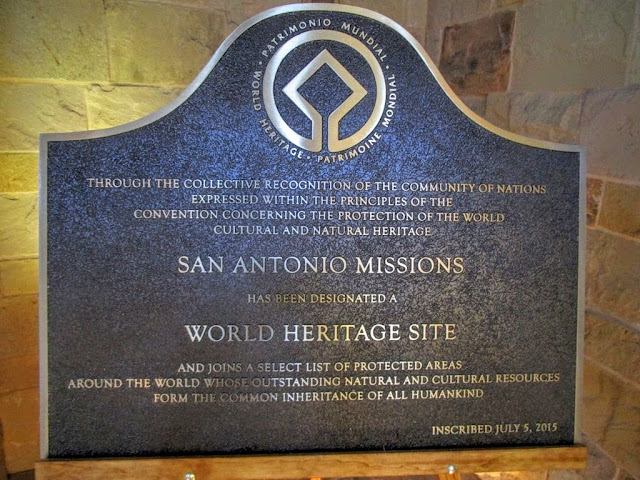 Another beautiful, romantic spot to visit in San Antonio.

Happy Birthday to our U.S. National Park Service!  It's a great reason to get out and enjoy the park in your backyard.  I visited Mission Concepción here and to see my visit to Mission Espada last fall click here.
Posted by Shirley Fox at 5:04 PM