Our mild winter and nice spring weather in San Antonio makes it the best time to complete big outdoor projects.  This year was no exception as we finished up several large projects and a few small ones.  Now with all that nice weather giving way to another hot summer I'll share some accomplishments.

By far our largest project this year was refurbishing the existing deck.  The before photo below shows our tired old deck with faded red stain, missing skirting and especially the deck surface needed serious attention.  Just one original criss-cross lath panel remained on the far right hand side after the rest fell apart.  Fortunately the deck structure was in good shape but did need to be leveled after 25 years in place on a slope. 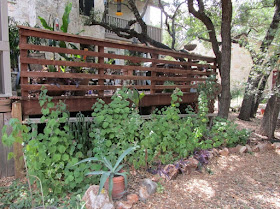 After leveling and adding new supports we covered that dated red with gray opaque deck stain and it was ready for new skirting. 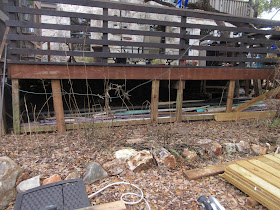 The finished deck looking much better with a horizontal skirting of cedar fence boards which will eventually fade to silvery gray.  These are standard dog-eared fence boards with the dog ears trimmed off.  We also added a hose bib and electrical outlet for convenience. 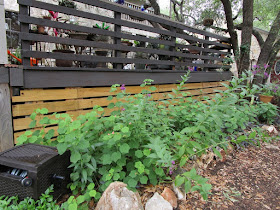 Topside we flipped existing deck boards over and stained them a lighter gray.  For another spring project Neal replaced the broken seat boards on this Texas star thrift shop bench then I compiled my collection of green pots and turned the bench into a plant stand.  The red wagon bed was a recent find at Yeya's and fits nicely under the bench to hold small terracotta pots.  Those cacti and succulents get plenty of afternoon sun under there. 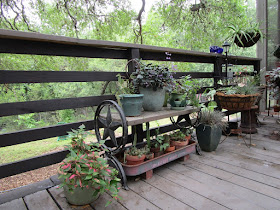 A low tree branch interfered with access to these stairs so Neal moved the stairs out five feet and replaced the treads.  This corner faces southwest so we didn't want to remove any shade. 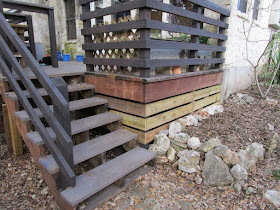 Currently with Turk's Cap filling in the bed.  We need to remove and stain the last few deck boards under the heavy planter this fall. 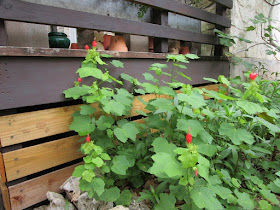 Neal did a great job on the stair skirting.  The left piece is removable for storage under the stairs. 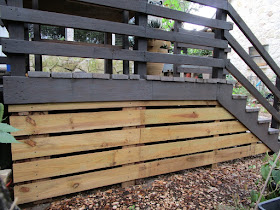 The original deck was built around this tree.  A shelf will go in that niche as a potting area. 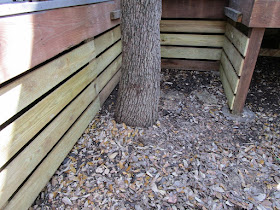 Our second big project was a brick walkway on the other side of the deck between the screen room and the house.  It was just a boring gravel path which needed work.  First we shored up the side with concrete block and used the opportunity to run a water line across the yard to the far fence. 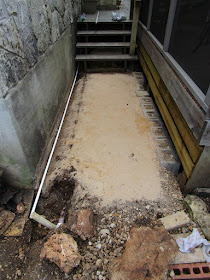 This is the only part of the yard with soil so it wasn't as hard to dig as some places.  Still there was a lot of dirt to remove and backfill. 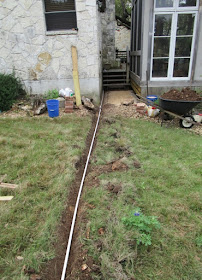 I'd been collecting locally made D'hanis bricks from Yeya's for while.  We combined those with bricks donated by our former neighbor who is a landscaping contractor.

After several test layouts we settled on a pattern. 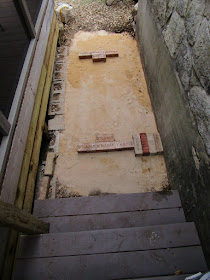 And here is the finished pattern reminiscent of a bordered rug. 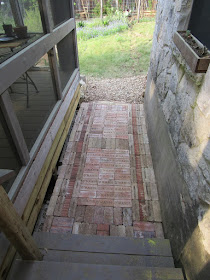 D'hanis has been making brick, roof tile, and pavers at their plant southwest of San Antonio since 1883 so they're a natural for San Antonio gardens. 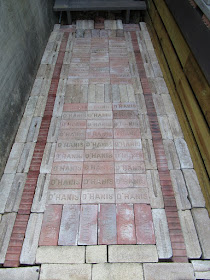 In this current view the grass grew back nicely over the water line.  The new brick path is on the right where the wheelbarrows are placed to catch expected rain this week. 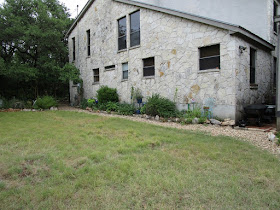 The bed along the north wall (shown above) was the first area planted in the back yard about 10 years ago.  Even though the area presents a nice green stretch along the wall it lacked color and interest when perennials weren't in bloom.  This year I added colorful Talavera pots and other objects to make it more fun and interesting as this is a main path from front to back when I'm out working. 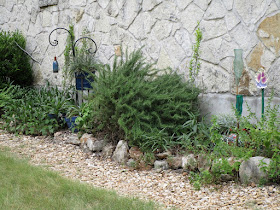 Potato vine nearly covers the bright Talavera now but there's still a nice shot of color near the gate. 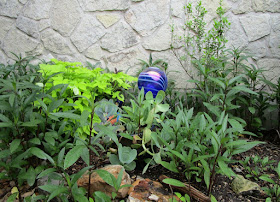 My new hose bib against the fence at the end of the new water line.  Now I don't have to drag a 100' hose around and for some reason the hose pot makes me want to put the hose away. 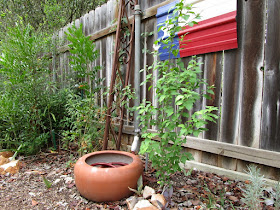 And the third and final project completed this week just in time for summer is a natural rock fountain in the front garden.  If you think it blends in that's what we were going for.  We had a pond here originally but it turned out to attract deer and other animals to the yard plus the tree roots were growing in and pushing up the liner.  We converted it to a recirculating fountain and went through a number of different ideas before settling on a large karst stone from the back yard. 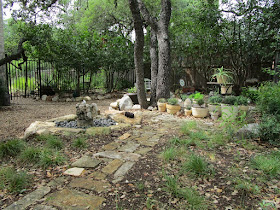 Most prefab fountains and ceramic pots would have looked too contrived here and stacked rocks didn't quite look intentional enough so we set the rock on a concrete base molded in an old plastic bucket.

Simply nice and I enjoy watching the water run through all the holes in the rock and onto the darker stones below.

Now as spring turns to summer and the days get shorter (yet hotter) we'll turn our attention to indoor projects for a while.